With the advent of supersonic jet aircraft and guided missiles in the fifties, air warfare tactics began to change radically. Instead of close-range maneuverable combat, it was planned to approach the enemy at maximum speed for a range of launch and missiles and destroy it in one salvo. According to this concept, in the Soviet Union, the design bureaus of Mikoyan and Gurevich created a light front-line fighter with a triangular wing, which went down in aviation history as the most massive jet combat aircraft. The prototype, called the E-4, flew on June 16, 1955. Serial production began in 1959 and lasted until 1985, with 10,645 aircraft built in the USSR. In addition, the MiG-21 was licensed in Czechoslovakia (194 units) and India (657 units). In China, the aircraft was launched until 2017 under the name J7/F7, in total, more than 2500 copies were built. The MiG-21 entered service in 67 countries and is still in service in some places. More than one major armed conflict in the second half of the 20th century was not without its participation. 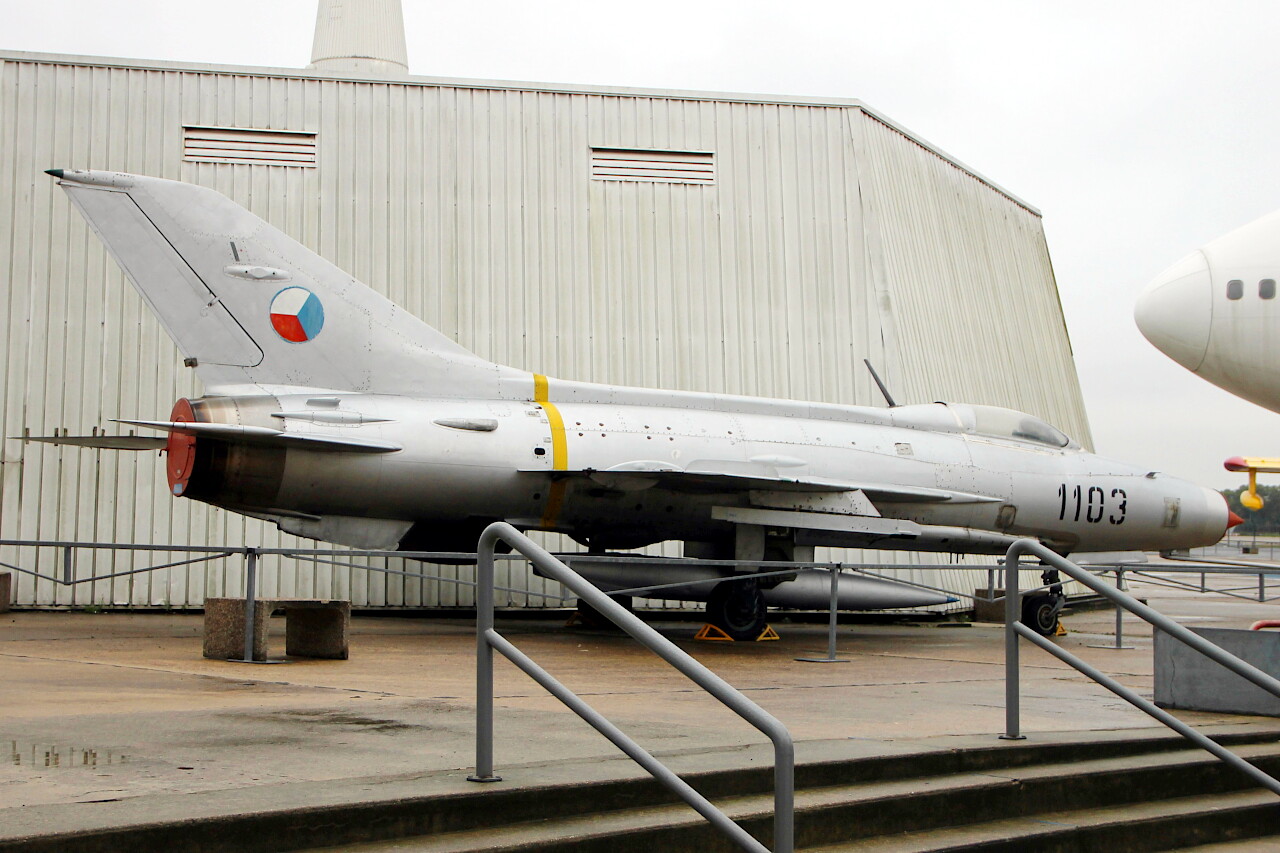 Mass combat use of the MiG-21 began in Vietnam in 1966, where they proved to be worthy opponents in battles with the latest American F-4 Phantom II fighters. Then there were the Arab-Israeli wars, the Indo-Pakistan conflict, the Iran-Iraq War, and many other conflicts in the Middle East, Africa, and Asia. During the Cold War, the MiG-21s were in service with all Warsaw Pact countries and were actively used during the Yugoslav Civil War. In the open parking lot of the Air and Space Museum in Le Bourget, you can see the MiG-21F-13, built under license in Czechoslovakia, where they were produced under the name Aero S-106. The aircraft entered service with the Czechoslovak Air Force in 1971 and was handed over to the museum in February 2003. The MiG-21F-13 fighter-bomber was produced since 1961 and had the following characteristics: wingspan 7.15, length 13.46 m, height 4.71 m, take-off weight 7100 kg. The R-11F-300 turbojet engine with a thrust of 5,740 kg provided a maximum speed of 2,125 km/h and a practical ceiling of 19,000 m. The flight range with a fuel reserve of 1,900 liters was 1,300 km, with an outboard tank of 1,580 km. Armament: one 30-mm HP-30 cannon, two K-13 air-to-air missiles, S-5M and S-24 unguided air-to-ground missile blocks, bombs. 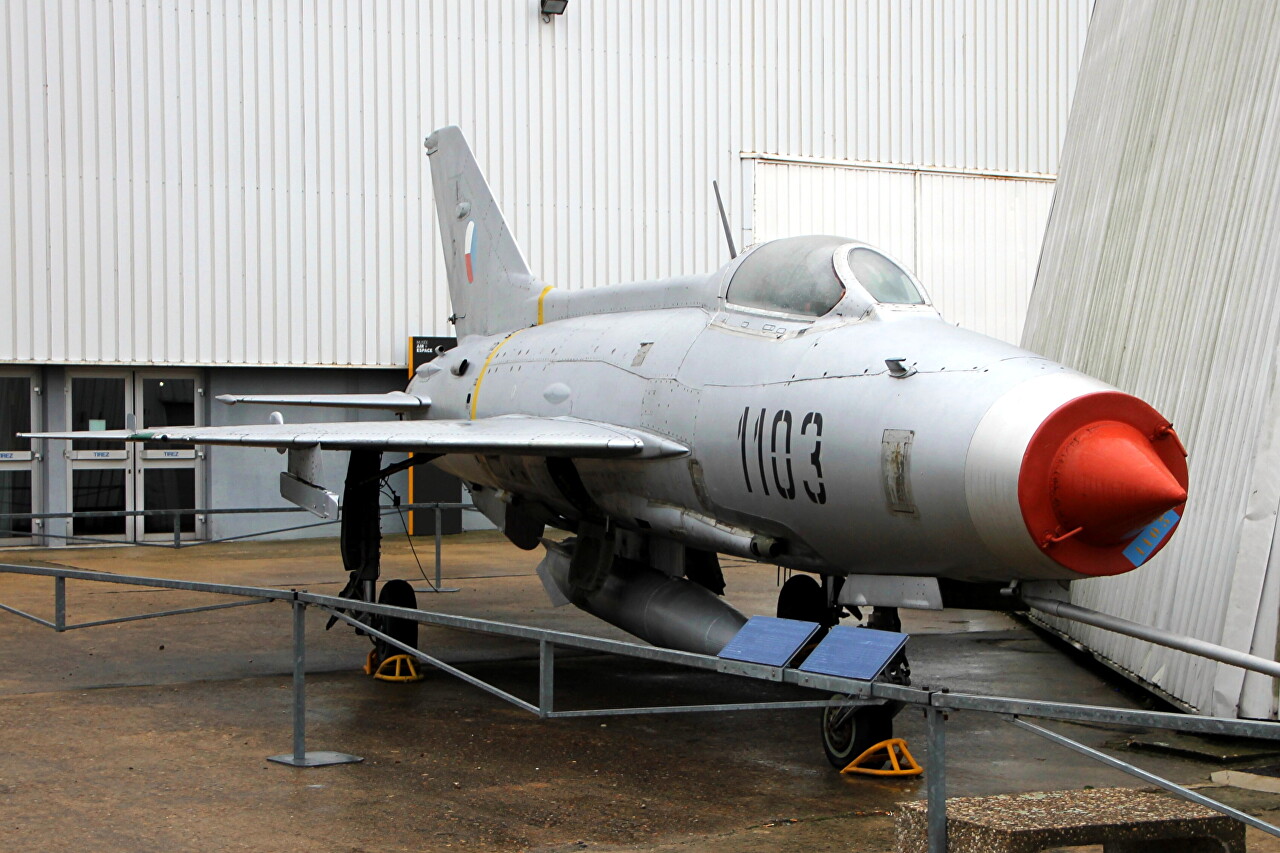 For all its remarkable flight qualities, the MiG-21 had one drawback - it required long runways and high-quality pavement, which limited its use in front-line aviation. To solve this problem, the designers developed two prototypes that are less demanding for airfields. The first, called the MiG-23-01, had two vertical turbofan engines placed in the fuselage, the other, the MiG-23-11, received a wing with variable geometry. The prototype MiG-23-11 first flew on June 10, 1967 and showed a clear superiority over the other layout. Serial production of the MiG-23 began in 1969, they were produced until 1985 in many modifications. 3,630 units were built and shipped to 27 countries. 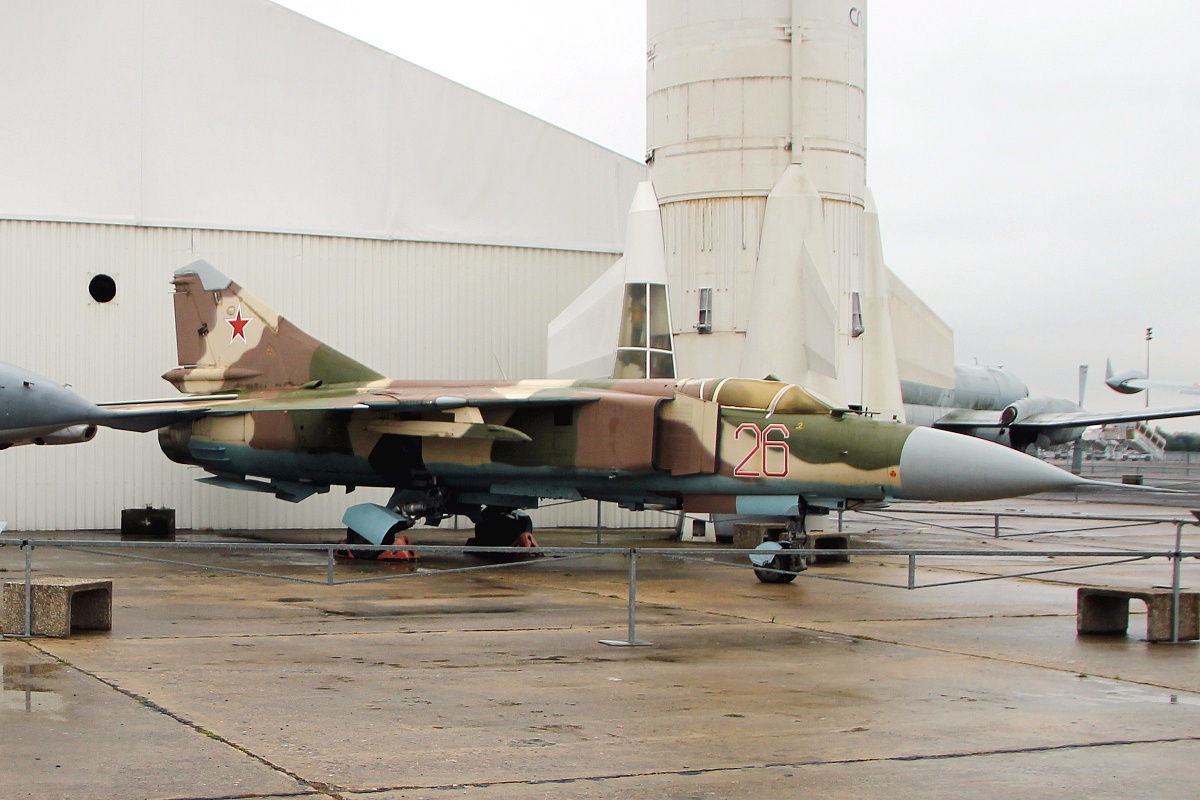 The museum presents the MiG-23ML, which entered service with the East German Air Force in June 1982. After the unification of Germany, Soviet-made aircraft became part of the Luftwaffe Bundeswehr, but the following year they were decommissioned. In 1997, the plane was transported to Le Bourget, where it was painted in the colors of the Soviet Air Force. The MiG-23ML was developed in 1974, was 1250 lighter than the base model and had an engine with more thrust, in addition, it is equipped with a new generation of electronics. Western experts considered this aircraft to be one of the best light front-line fighters in the world. The MiG-23ML is equipped with one Tumansky-designed R-35-300 turbofan engine with a maximum thrust of 8550 kg and 13000 kg on the afterburner. The wing has three sweep positions: 16°, 45° or 72°, with the wingspan varying from 7.78 m to 13.96 m. The aircraft is 16.63 m long, 4.82 m high, and has a take-off weight of 17,800 kg. The maximum speed is 2500 km/h, the practical ceiling is 18500 m, the flight range is 2820 km. Armament: 1 23-mm GSH-23L gun, 2 R-23 air-to-air missiles, 4 R60 air-to-air missiles.