This third-generation multirole aircraft was developed by the Swedish company SAAB in the sixties and has an original aerodynamic scheme biplane-tandem, or "duck". Its development began in 1952, but the prototype first flew on February 8, 1967. Swedish designers took a very careful approach to choosing the concept of the aircraft, considering more than a hundred different options, as a result, the SAAB 37 had the most advanced aerodynamics in the world at that time. The development was funded by the Swedish government, allocating 10% of the budget allocated for scientific programs for research. The aerodynamic scheme was developed by 1963, and the following year 7 prototypes were built. In 1968, the aircraft was put into production under the name SAAB 37 Viggen (lightning strike). In May 1969, the plane made a splash at the Paris Air Show, which put Sweden on a par with the leading aircraft manufacturers. Production aircraft began to arrive in the Swedish Air Force in June 1971. 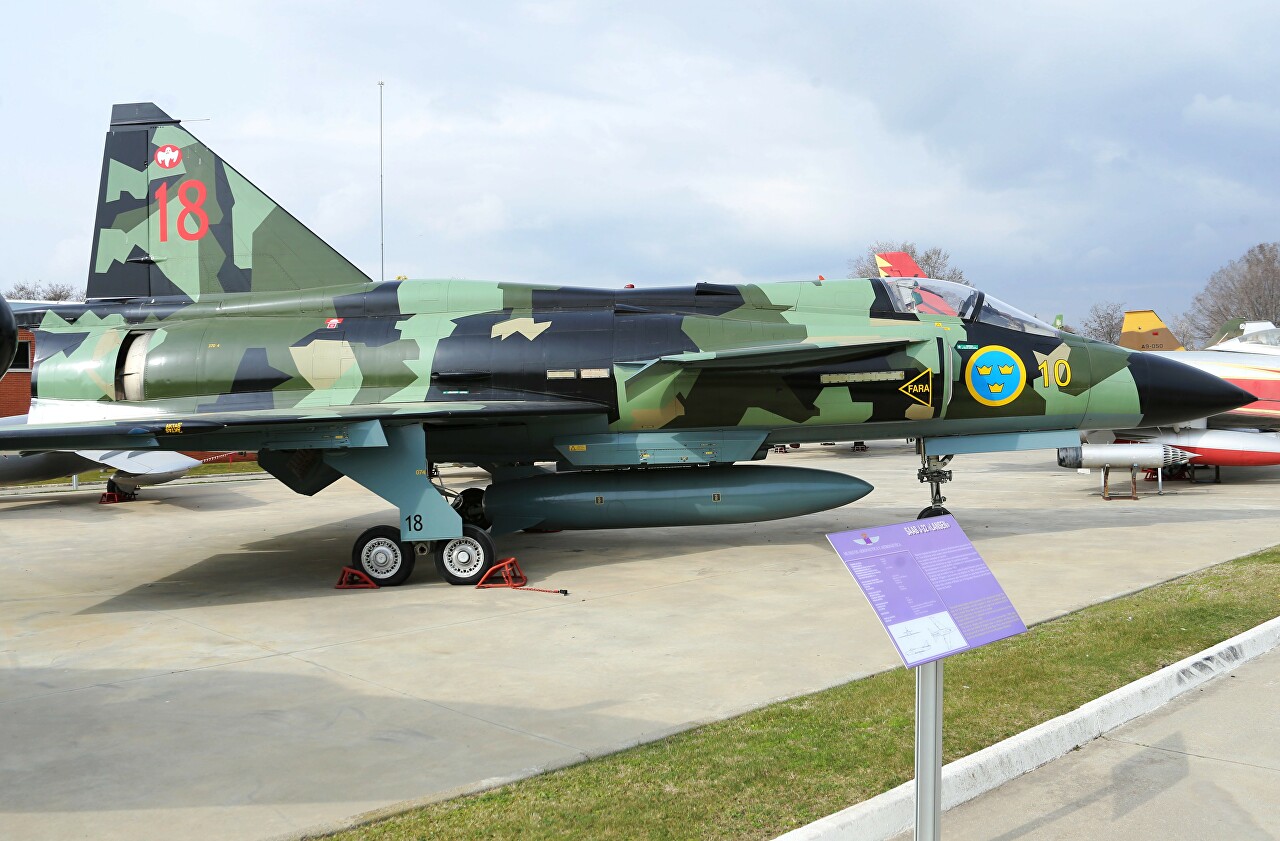 The following requirements were imposed on the aircraft: the maximum speed is twice the sound speed, the ability to fly supersonic at low altitudes. Another innovation was digital electronic equipment, which included an on-board computer and a multi-function display, where integrated circuits were used for the first time in the world. The electronic system could receive data from Sweden's national air defense system, the STRIL-60, again the world's first mass-produced aircraft technically integrated with ground-based detection and guidance services. In the process of software development, the concept of distributed computing and other methods of processing information in real time appeared. The aircraft had a powerful radar system by the Swedish company Ericsson, capable of detecting low-flying targets, among other things. 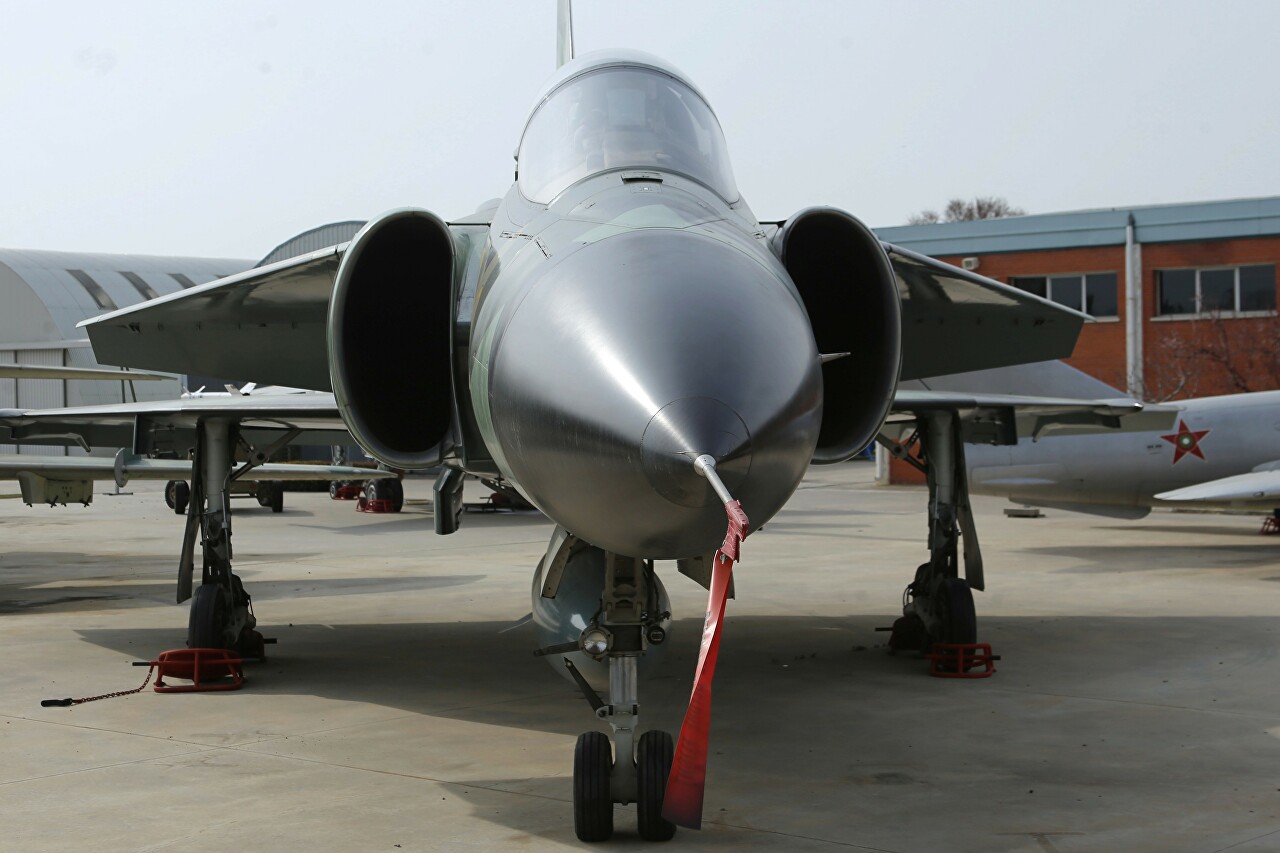 The aircraft had a short take-off and landing (up to 1000 meters) and the possibility of use from unprepared sites, including the use of highways. To reduce the pressure on the ground, the designers used two-wheeled trolleys of the main landing gear pillars. I must say. 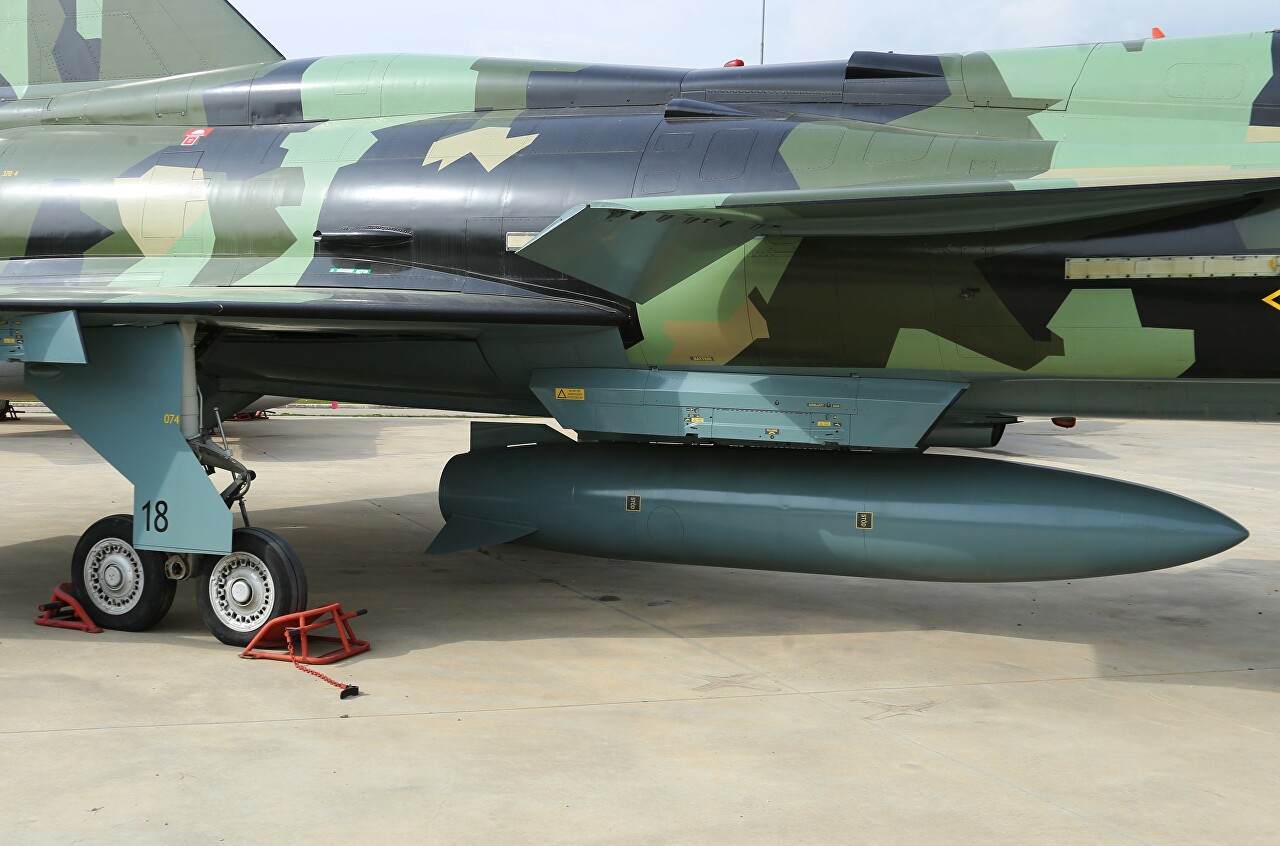 The main modification of the AJ-37 was intended for assault strikes, the role of the fighter was considered secondary. A total of 108 such aircraft were built, they were in service from 1971 to 2005. In 1985, Viggen received a system that provided the exchange of radar and tactical information with other aircraft, which made it possible to launch missiles at a target detected by another aircraft. Thus, a group of fighters had only one radar turned on, which could be detected by the enemy, while other planes flew with their radars turned off, remaining unnoticed, but had all the data for firing. In other countries, similar systems appeared 10 years later. From 1993 to 1998, the aircraft underwent modifications, avionics and software were updated, after which the aircraft received the AJS-37 index. The J-32 and AJS-37 aircraft donated by the Swedish Air Force Museum (Flygvapen Museum) are on display at the Madrid Aeronautics Museum. In 1999, planes flew from Sweden to Cuatro Vientos, the first jet aircraft to land at this airport. 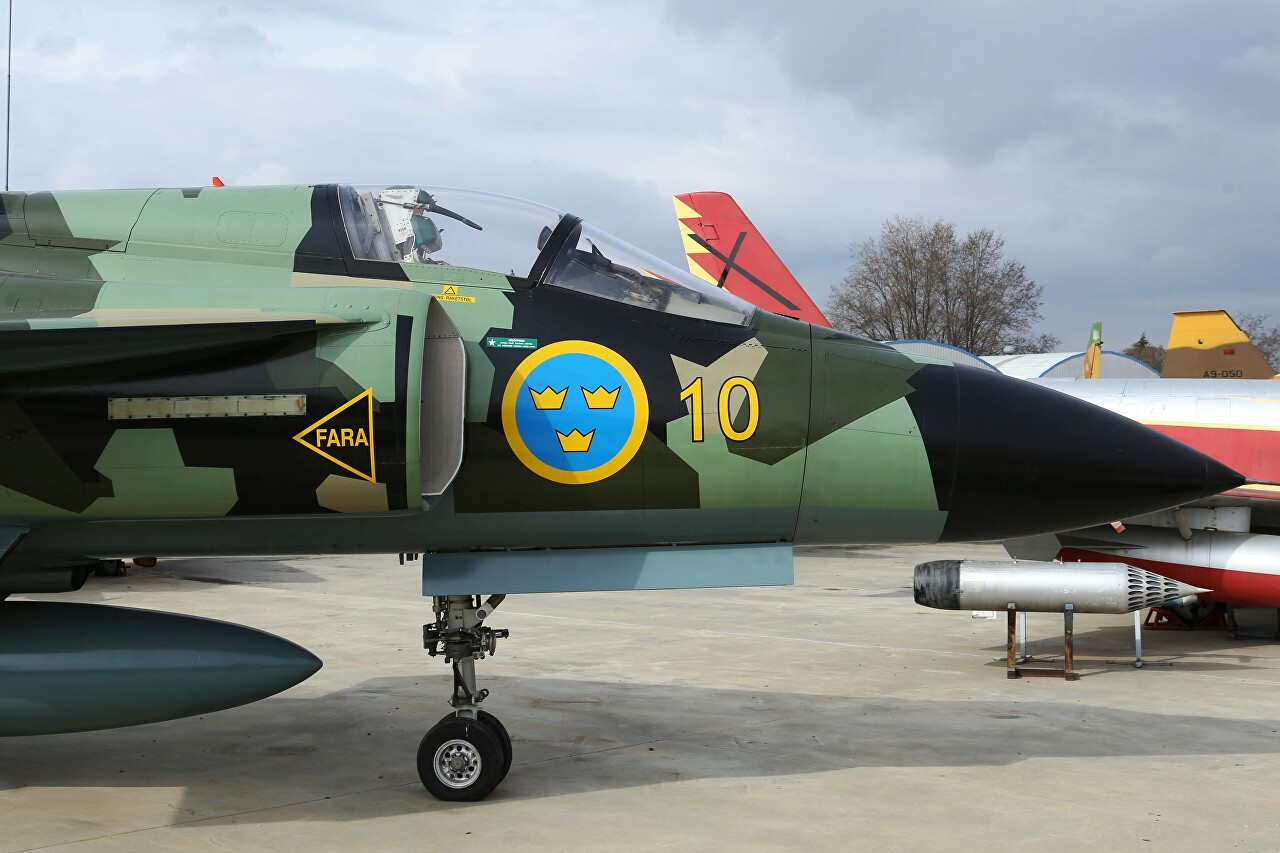 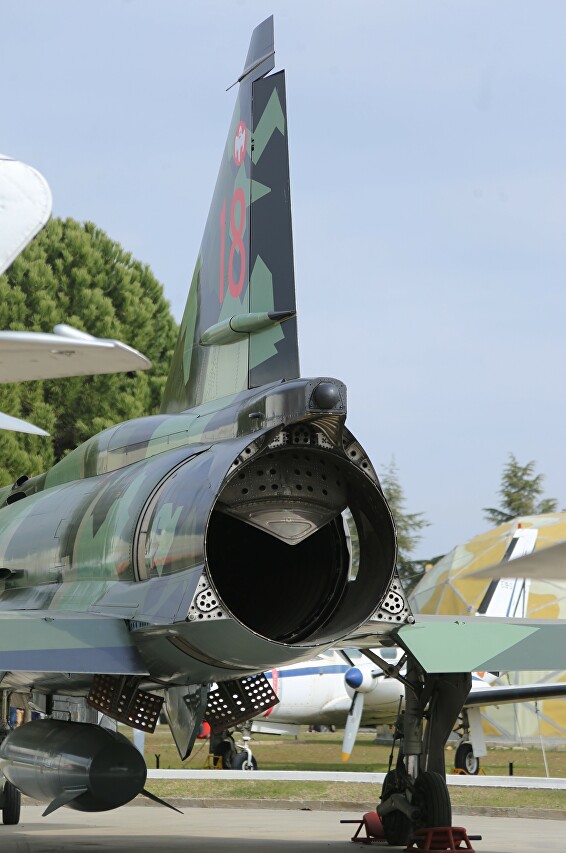 The aircraft does not have its own small arms, a container with a 30 mm Oerlikon KCA cannon with 125 rounds of ammunition is installed on the central suspension, up to 5000 kg of load can be placed on six external suspension units. In the fighter version, these were 6 launchers for 2 RB71 Skyflash air-to-air missiles or 6 AIM-9 Sidewinder air-to-air missiles, in the assault version, 4 launchers for 6 unguided Bofors air-to-ground missiles of 135 mm caliber. 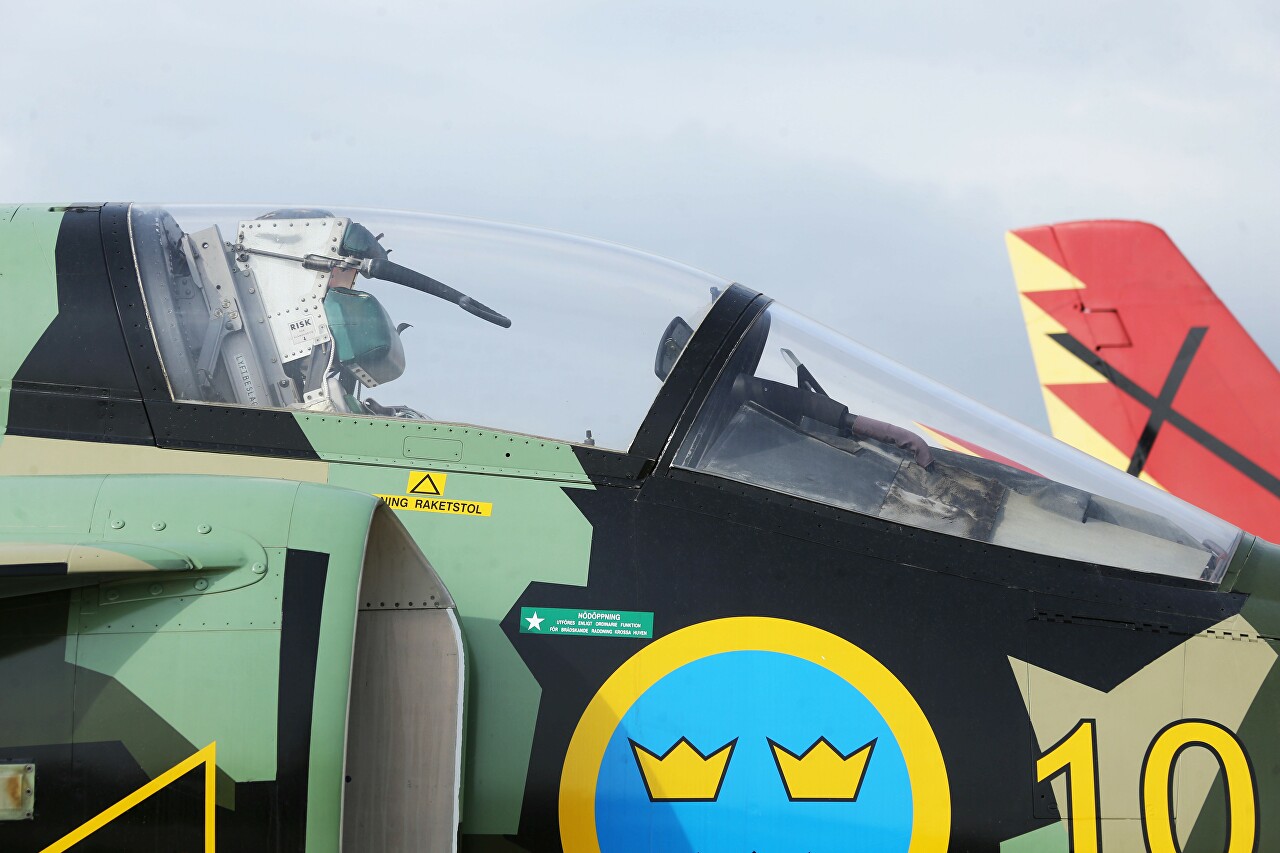