The F-86 single-seat jet fighter was the first swept-wing aircraft to enter service with the United States Air Force; the prototype first flew on October 1, 1947. When developing it, the experience of German aerodynamicists was used, who carried out purges of models with a swept wing back in the second half of the thirties. Another innovation was the AN/APG-30 fire control radar with a range from 150 to 3000 meters, the aiming point was displayed in the reticle taking into account the radar data and the ballistic computer. This made it possible to hit the target from the first stage, without aiming, which gave a great advantage in collisions with Soviet MiG-15s during the Korean War. In total, 6,000 units were built, which were in service with the Air forces of about 30 countries. Sabre's were the first jet fighters in Spain, they arrived under a cooperation agreement with the United States, a total of 270 copies were received. Deliveries began in 1955, and the planes arrived at Getafe Air Base, where CASA engineers and technicians were engaged in their acceptance. The planes came from combat units of the US Air Force, which were re-equipped with the F-102, were pretty worn out, many went through combat operations inKorea and a Spanish aviation specialist had to work hard to put them in order. I must say that the Sabres were developed in 1946 and were already considered obsolete. Their acquisition by Spain was not so much a defense as a political goal. The fact is that the nationalist Franco regime, although it observed formal neutrality in World War II, but had close contacts with Hitler's Germany, and the so-called Blue Division, consisting of Spanish volunteers, took part in the fighting on the side of Germany. Therefore, after the war, Spain was isolated in Europe, and the cooperation agreement with the United States was its breakthrough and the first step towards joining NATO. The delivery of the F-86s was a payment for Spain to provide its airfields for the deployment of USAF aircraft. The F-86 received the Spanish name C. 5 and began service in the 1st Fighter Regiment at the Manises Air Base in Valencia. Their pilots were veterans of the Civil War, a year earlier sent to train in the United States. In total, 270 aircraft were received until 1958, and for more than 10 years they formed the basis of fighter aviation. In 1967, they began to be replaced by Northrop F-5,however, the last Sabres were decommissioned in 1974. An interesting fact is that when the F-104 Starfighter arrived in Spain, pilots who flew at least 500 hours on the F-86 were selected for retraining on this aircraft, although the Starfighter was difficult to pilot, did not forgive mistakes and suffered many disasters in other countries, but not a single copy was lost in Spain. The Madrid Aviation Museum displays an F-86F-25 from 101 Squadron, which was decommissioned in 1971 and transferred to the museum in 1974. The aircraft is painted in the colors of the Patrulla Ascua aerobatic team. The idea of creating this group appeared in 1956, during one of the training flights, when one of the pilots of the four F-86s came up with the idea to perform a loop with the whole group. The group existed until 1965. 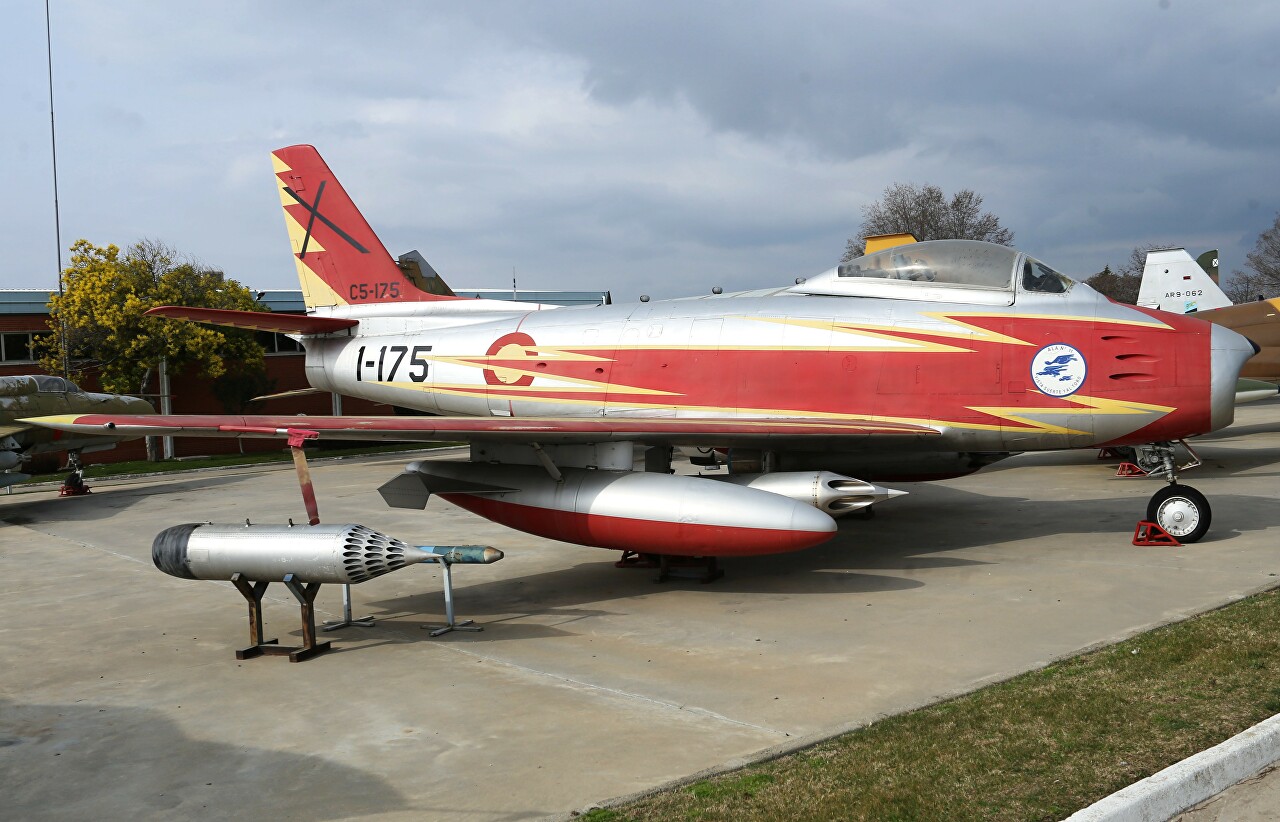