The first production copy of the Concorde made a test flight on December 6, 1973, then seven more aircraft were built. In two years, these aircraft flew a total of 5,500 hours, including more than 2,000 at supersonic speeds, and on October 9, 1975, Concorde received a certificate of airworthiness in France and on December 5 in the UK. 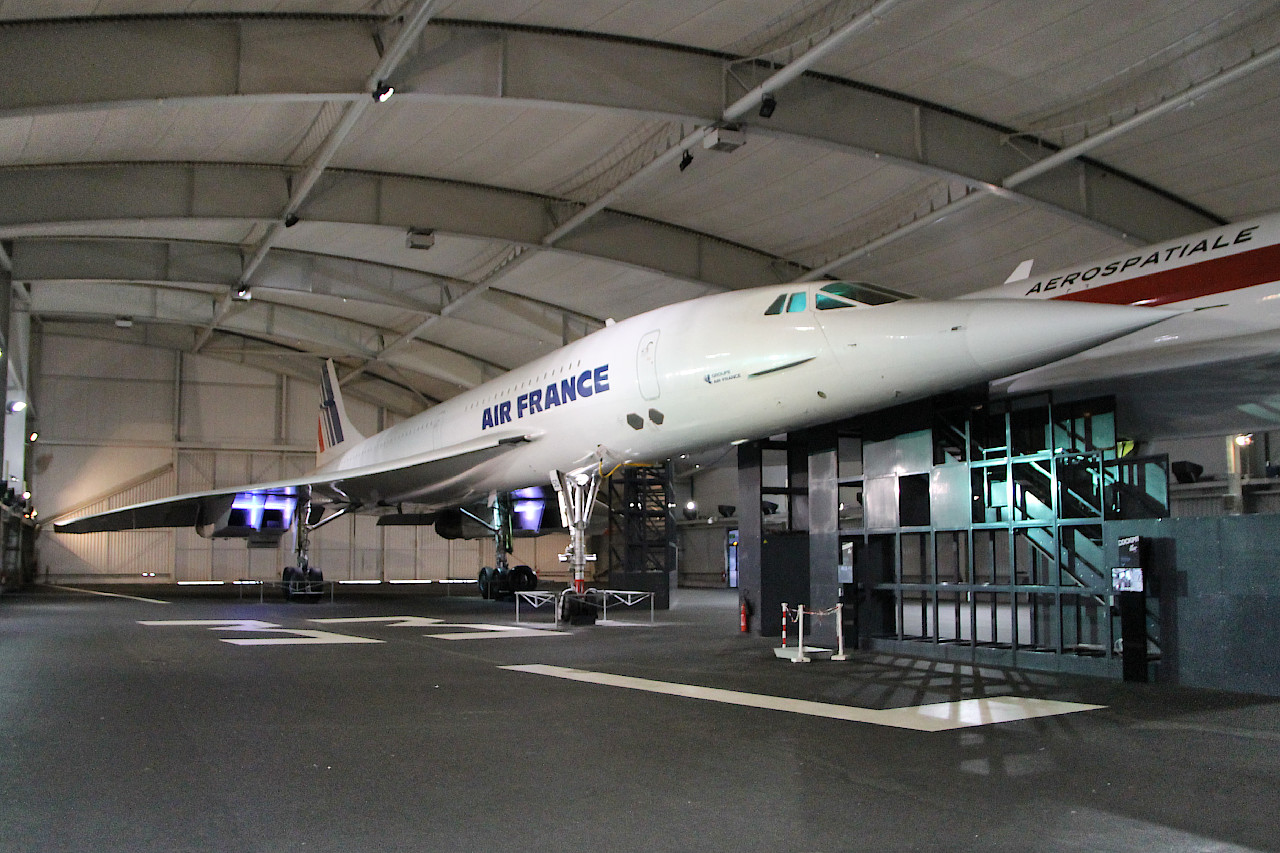 On January 21, 1976, commercial operation on the Paris-Dakar and London-Bahrain lines began, but no orders were received from the airlines. At the time of the program's launch in the mid-sixties, the aviation community believed that after military aircraft, Passargir aviation would also switch to supersonic speed, so leading airlines made pre-orders for 74 Concords. 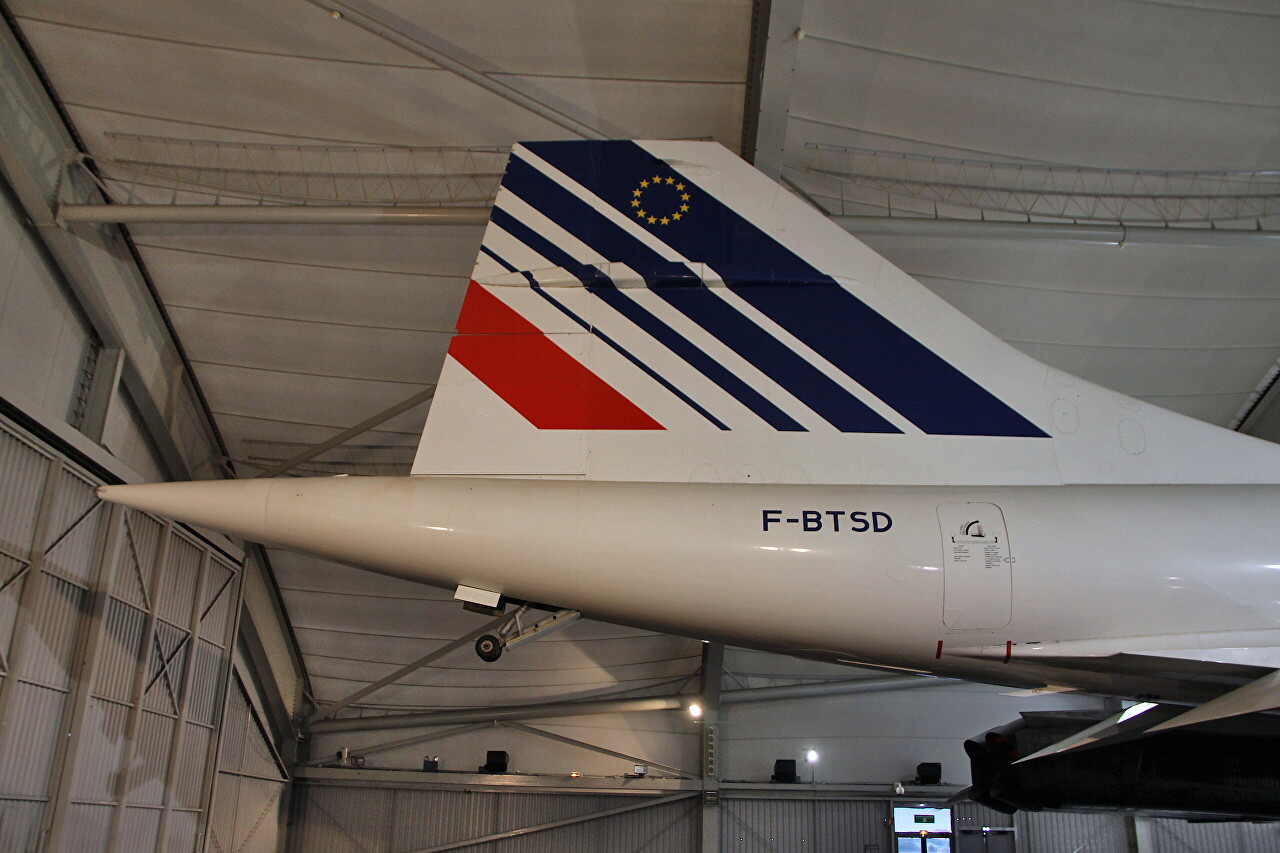 However, by the beginning of serial production, it was already clear that the operation of these aircraft required huge costs, starting with the training of crews, ending with difficulties with maintenance, which was very different from traditional aircraft. Of course, this could be solved over time, but very high fuel consumption per passenger-kilometer could not be eliminated in principle. In addition, in 1973, the oil crisis broke out in the world, fuel prices soared sharply, and even tripling the cost of tickets relative to subsonic flights did not make the plane profitable. To save the program, and mainly to maintain prestige, the governments of Great Britain and France imposed 16 serial Concorods on national air carriers, compensating for the cost of operating them. 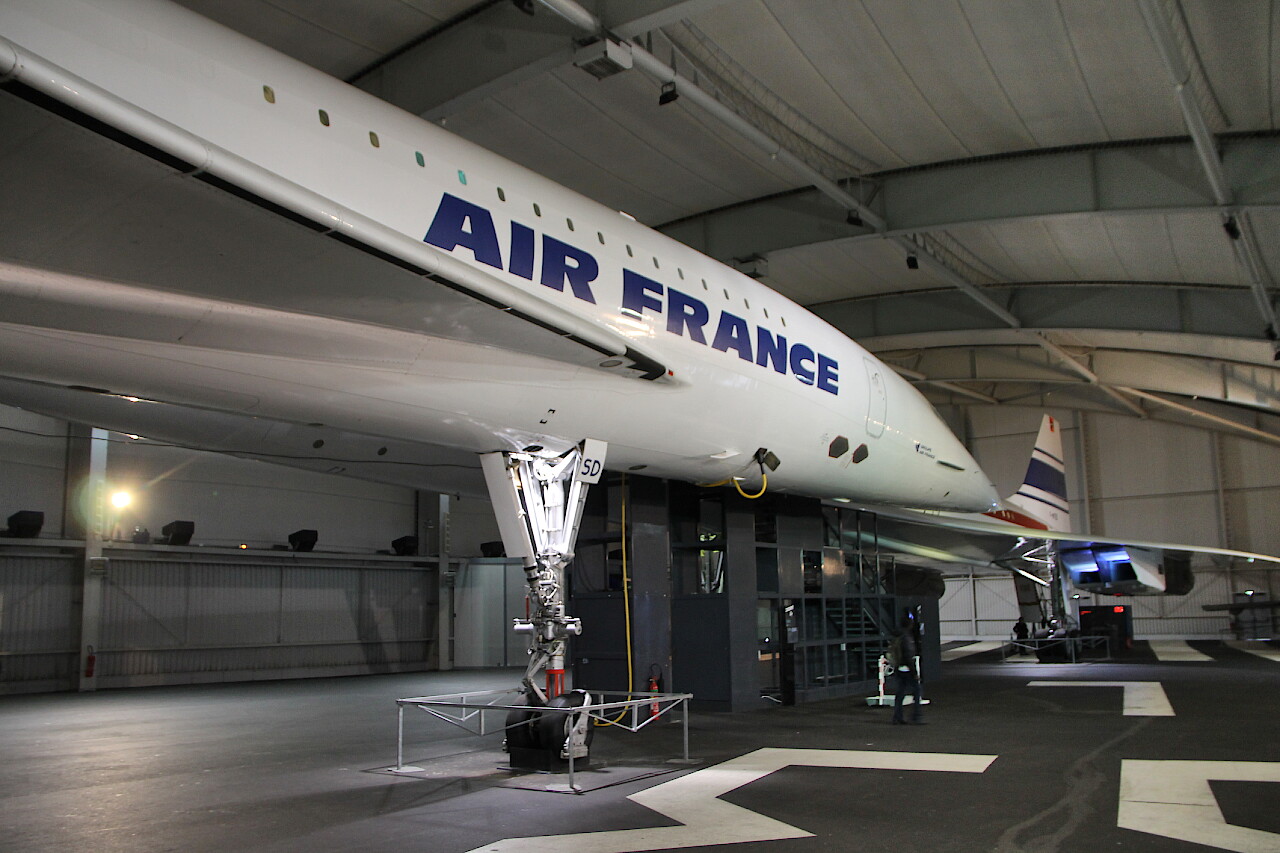 The main destinations were transatlantic flights, and despite the exorbitant cost of tickets ($10,500 for a round-trip flight from London to New York), Concorde flights had an excellent reputation and regular passengers. This was facilitated not only by the reduced flight time, but also by the exclusive on-board service. 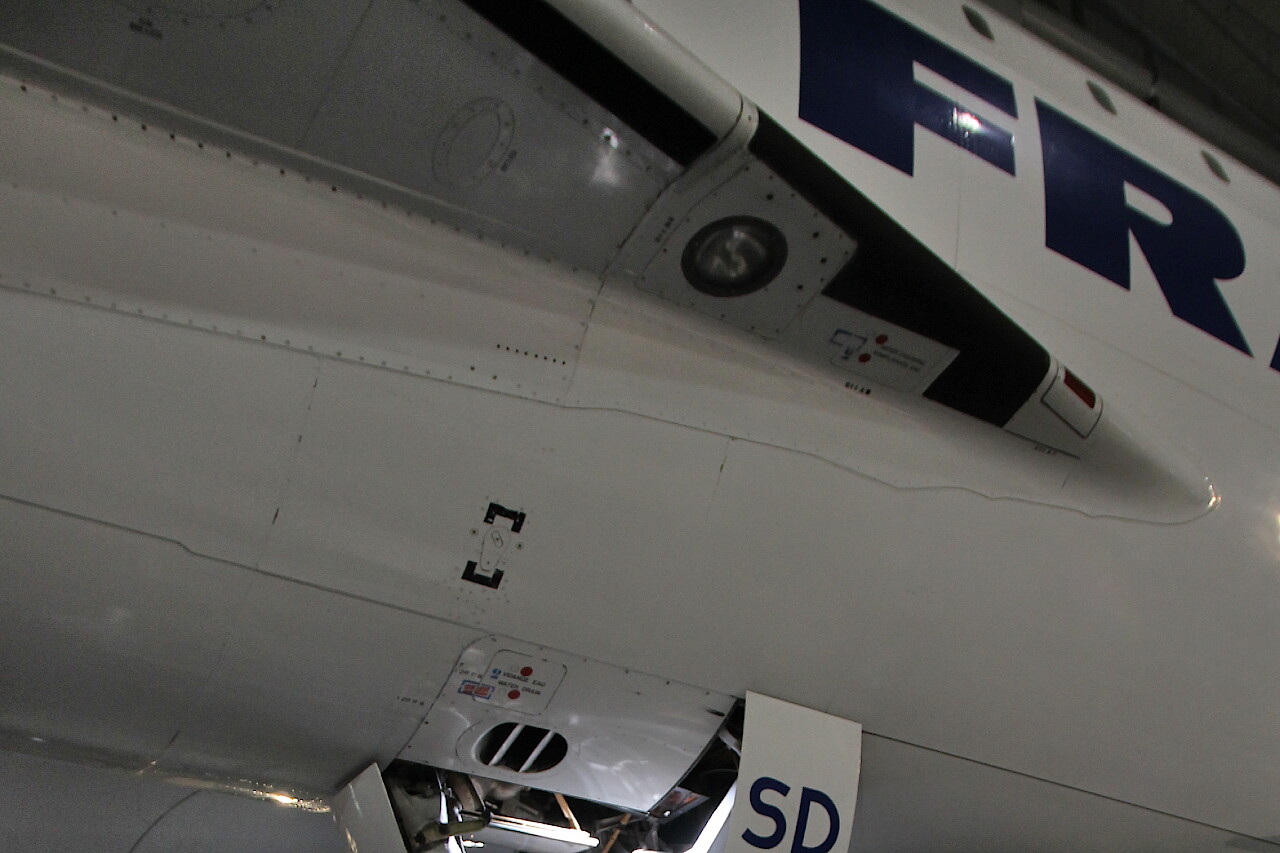 A significant part of the losses from regular flights were compensated by charters commissioned by large businesses or governments of different countries. Commercial operation of the Concorde lasted 27 years, with a one-year break after the disaster in 2000. In total, the planes were in the air for about 250 thousand hours and carried more than 3 million passengers. The last flight took place on October 24, 2003. 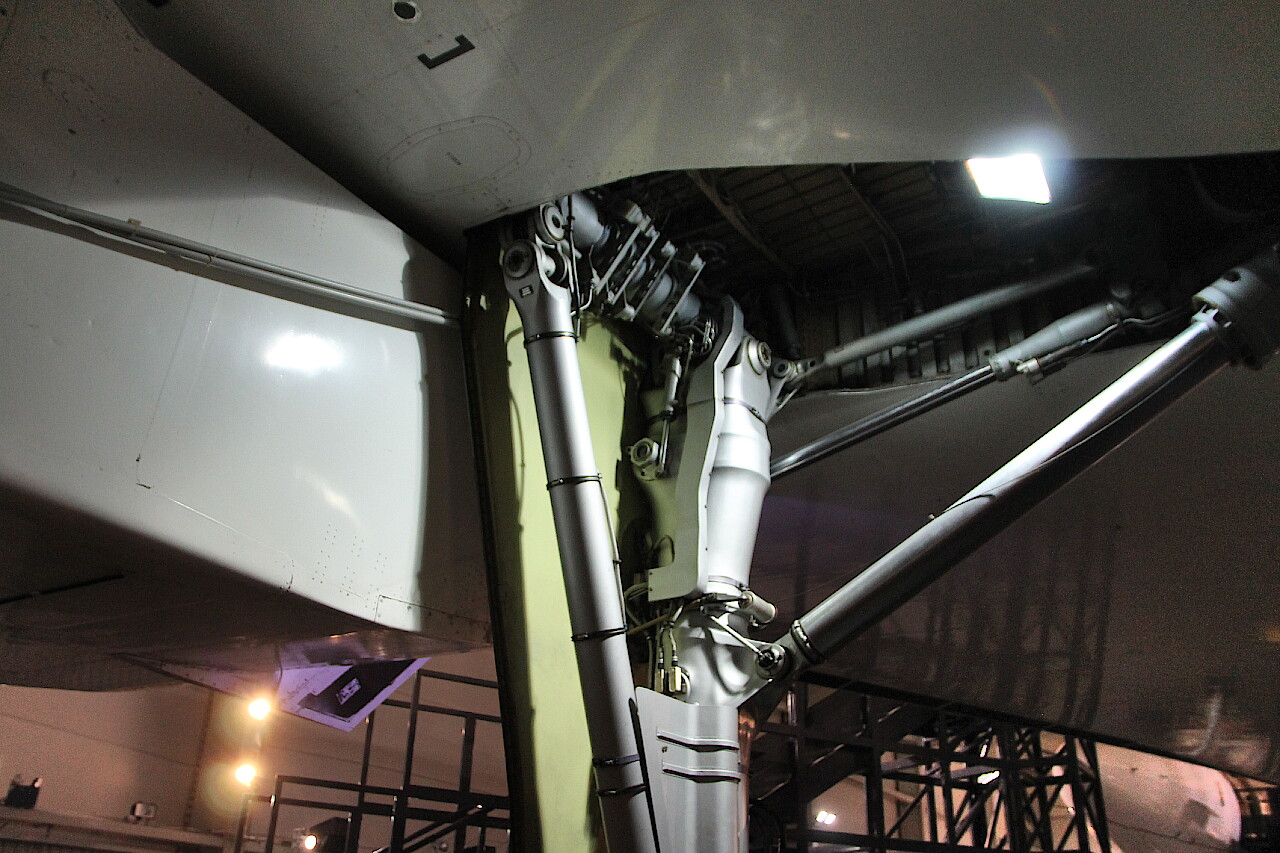 The second copy of the Concorde, presented at the Air and Space Museum in Le Bourget, has the factory number 213 (13 serial copy), the tail number F-BTSD Air France and the proper name Sierra Delta, it made its first flight on June 26, 1978. In the history of this aircraft, there are two record round-the-world flights: on October 12-13, 1992 in a westerly direction, it circled the globe in 32 hours, 49 minutes and 3 seconds, and on August 15-16, 1995 in the opposite direction, spending 31 hours, 27 minutes and 49 seconds. In 1996, the liner participated in an advertising campaign for Pepsi in the Middle East, which cost the beverage manufacturer $ 20 million. 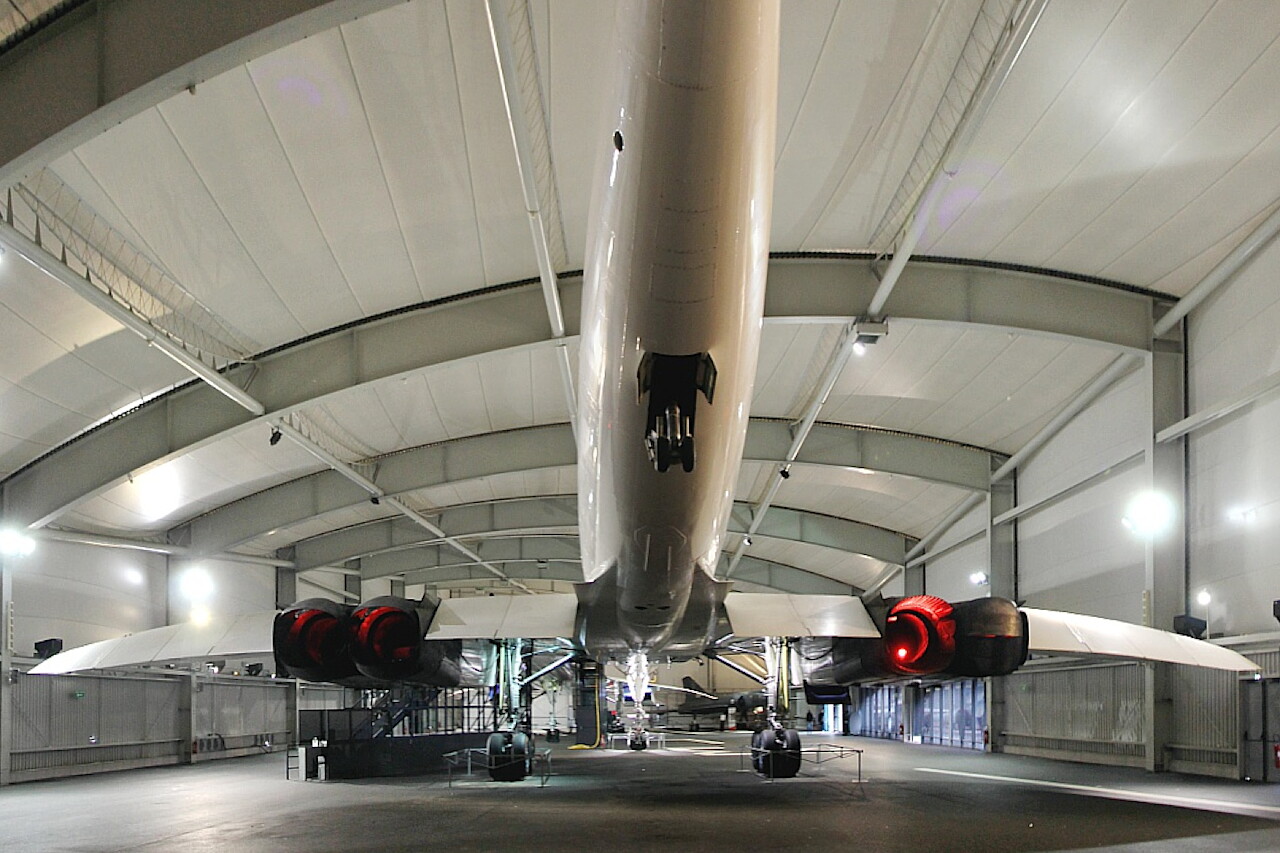 On May 31, 2003, it performed its last passenger flight, closing the New York-Paris supersonic line. On June 14, this aircraft took off for the last time, flying from Roissy to Le Bourget, where it took a place in the museum's exposition. During its operation, it completed 4,282 flights with a total duration of 12,974 hours. 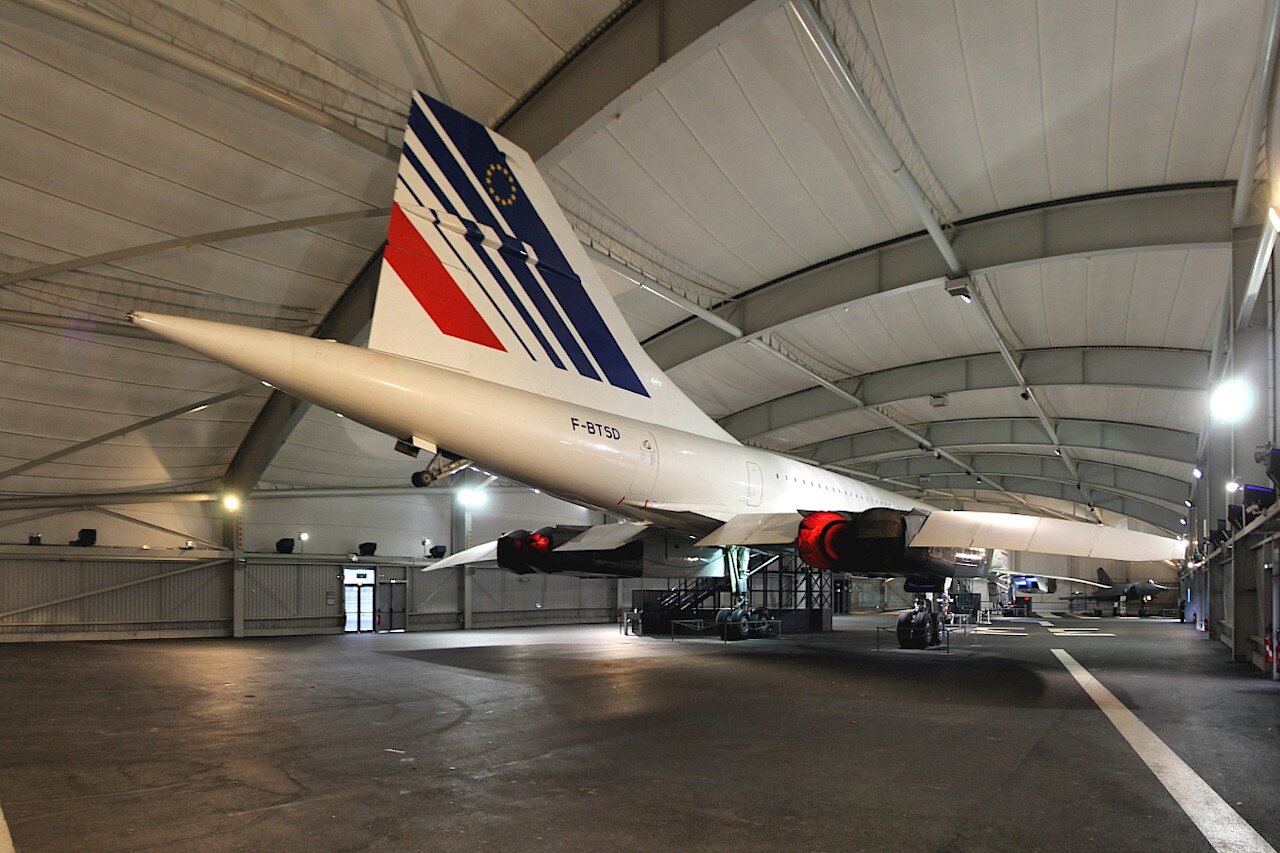 When developing engines for the Concorde, the Olympus 301 produced by Bristol Siddeley, tested on Vulcan bombers, was taken as a basis. After significant improvements, the engines received the name Olympus 593 and were produced in partnership with the British company Rolls-Royce and the French SNECMA. For the first time for civilian aircraft, the engines had afterburner chambers. 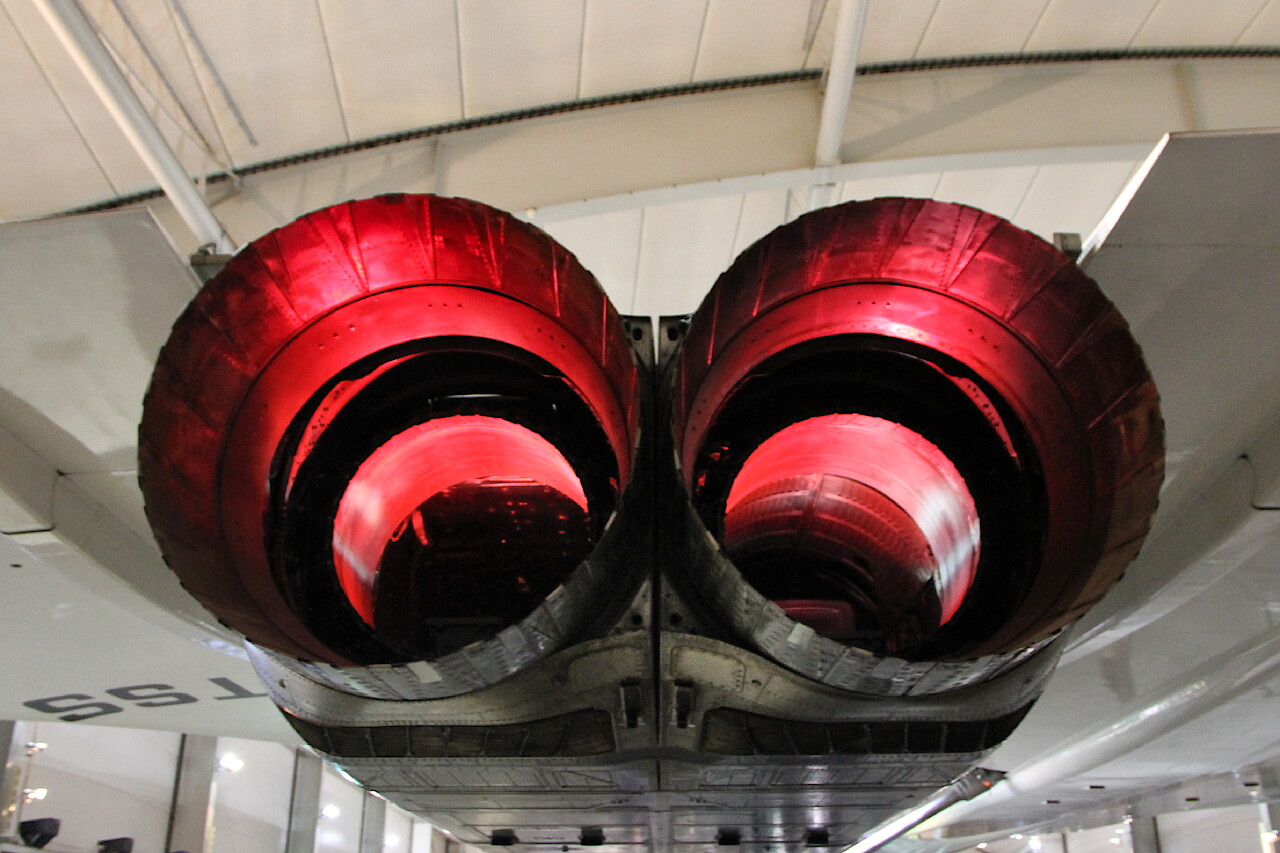 Concorde engines are installed in pairs under the wing, have controlled air intakes. A sophisticated automatic system reduced the speed of the incoming flow to subsonic, since turbojet engines cannot directly operate in a supersonic flow. 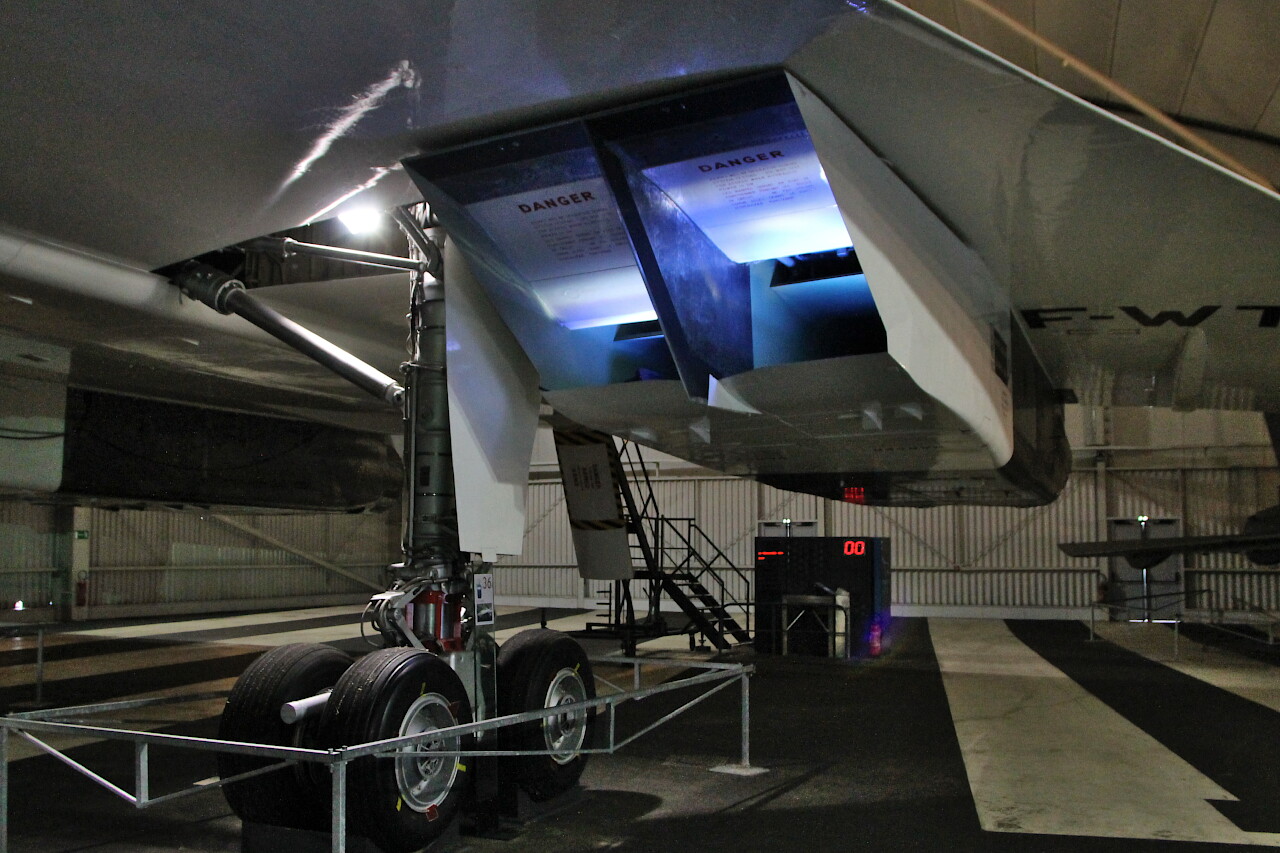 Reverse flaps provided reverse thrust to the engines during the run, and pilots could also use a braking parachute. 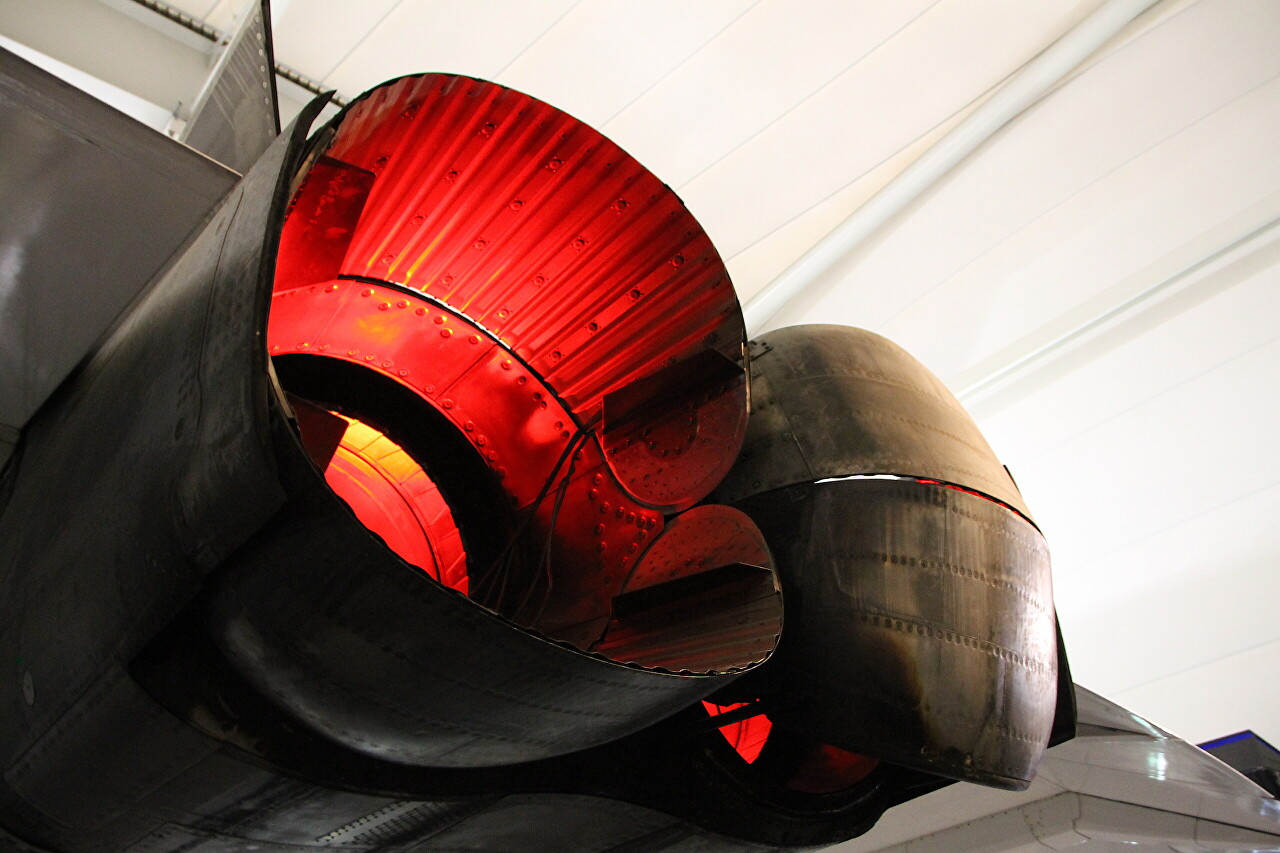 The landing gear stands are unusually high, their height is about 3.5 meters, and special ramps of increased height had to be used to access the aircraft. This is due to the fact that the Supersonic took off and landed at high angles of attack. 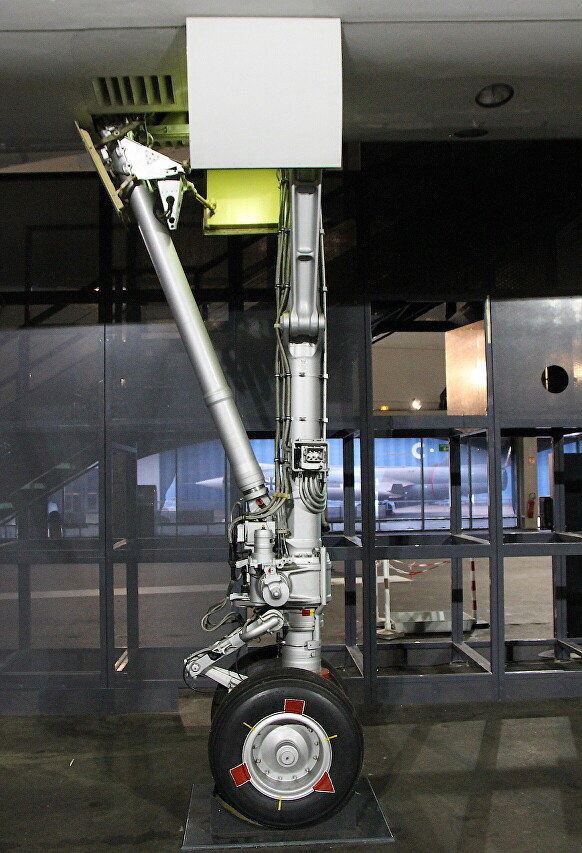 For the same reason, the plane had a fourth fulcrum. The rear landing gear was used to protect the tail boom from touching the concrete of the runway. 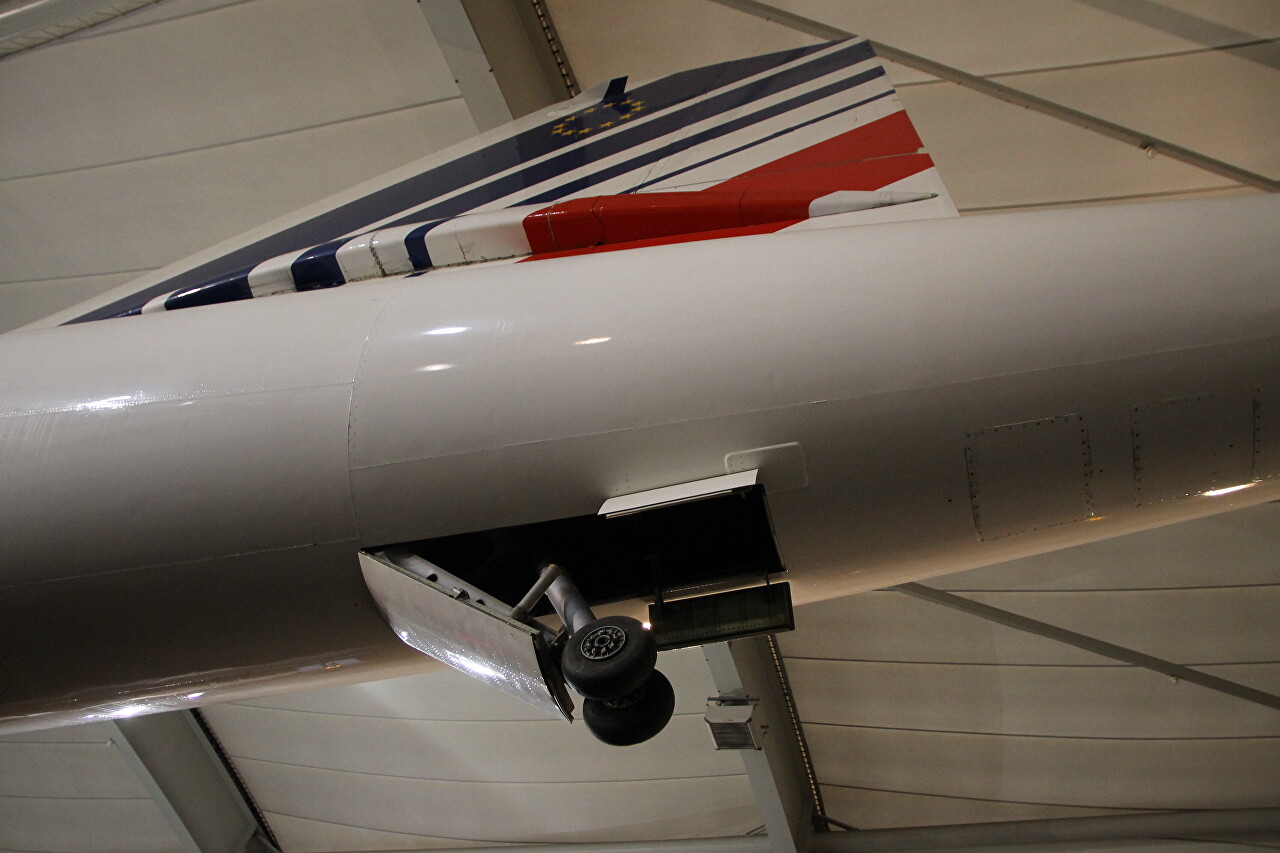 The landing gear struts take on huge loads when the aircraft touches the runway, and they do not look massive. Concord's hydraulic lines are duplicated three times. 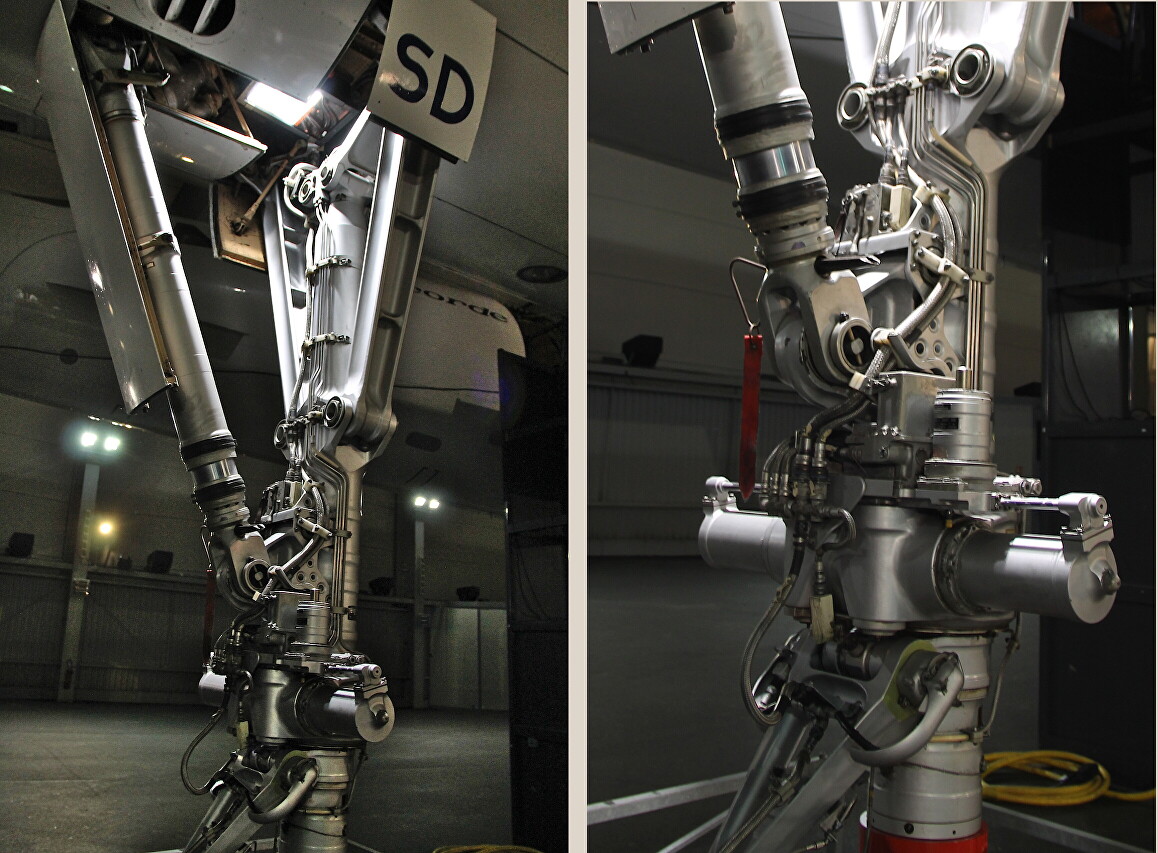 The Concorde has a unique braking system that effectively absorbed the energy of an aircraft weighing 188 tons, providing a run from landing speed to a full stop of 1,600 meters, and the anti-skid system made it possible to maintain this distance even on a wet lane. 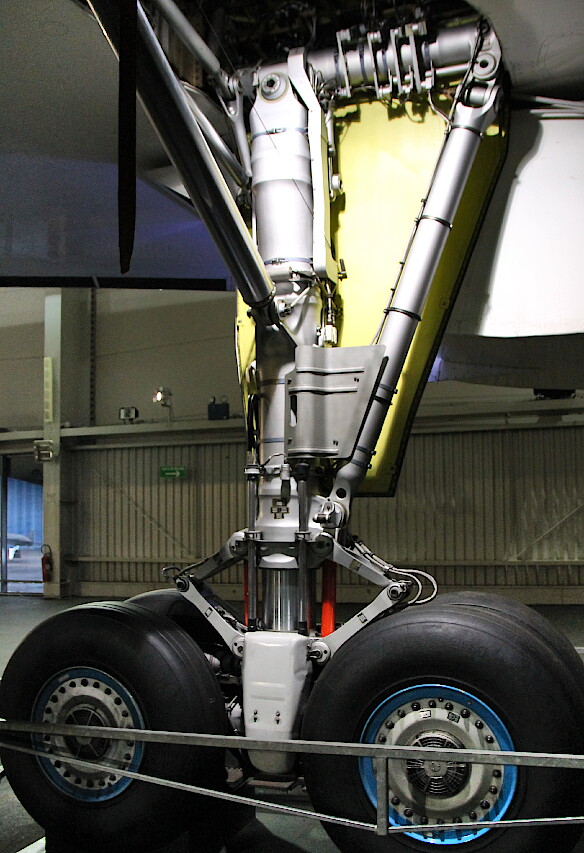 High speed (400 km / h on takeoff and 305 on landing) required the creation of special tires. The only Concorde crash occurred precisely because of a tire rupture, although, strictly speaking, the tire has nothing to do with it, the reason for the destruction of the tire was a metal plate that fell off from the plane that took off earlier. 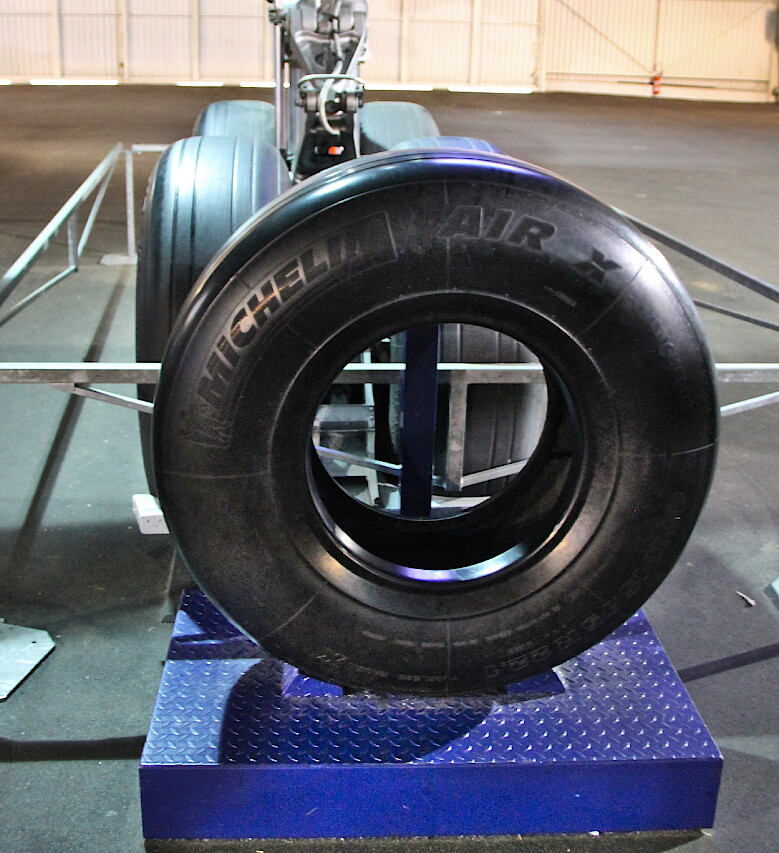 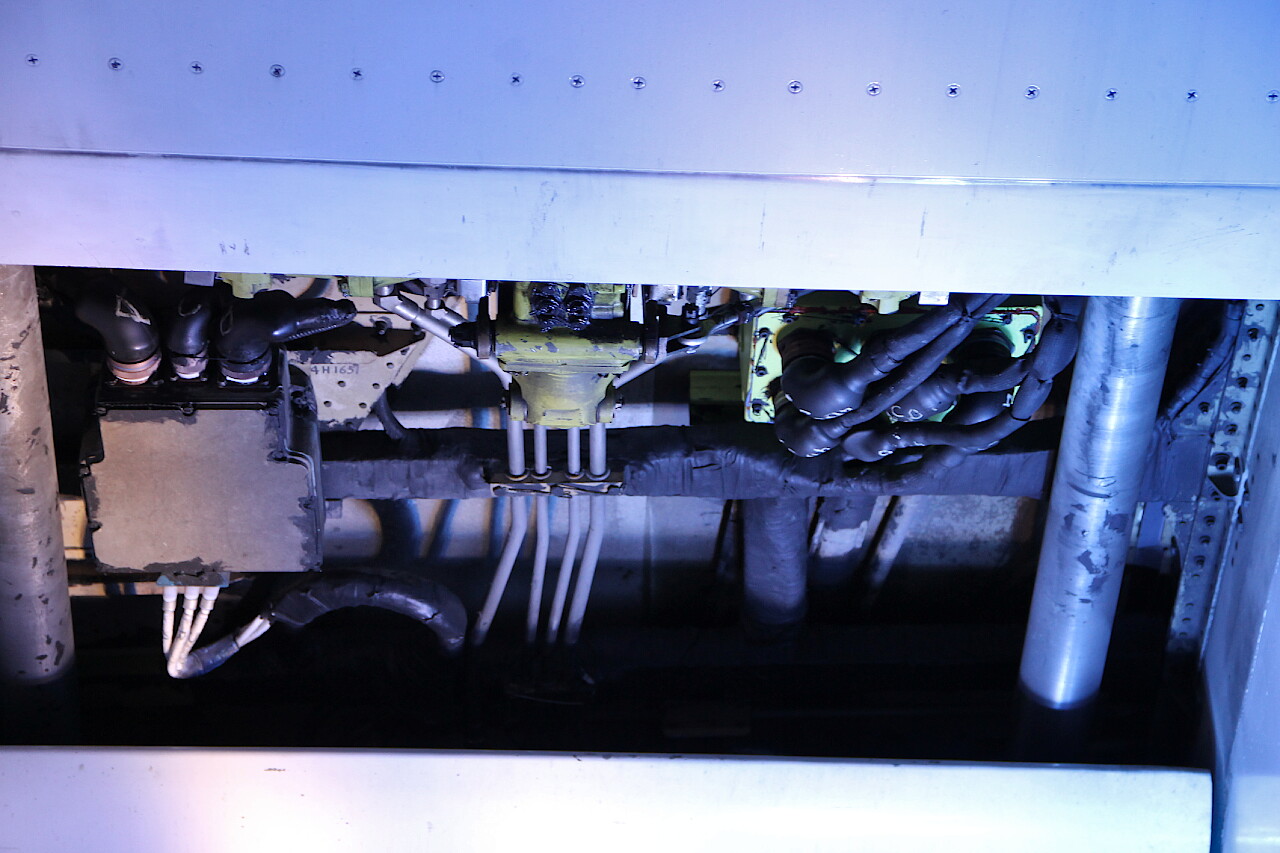 Admission to the museum is free, but you can view the interiors of both Concordes, as well as other two other aircraft, only by buying a ticket for 16 euros at the museum's ticket office. 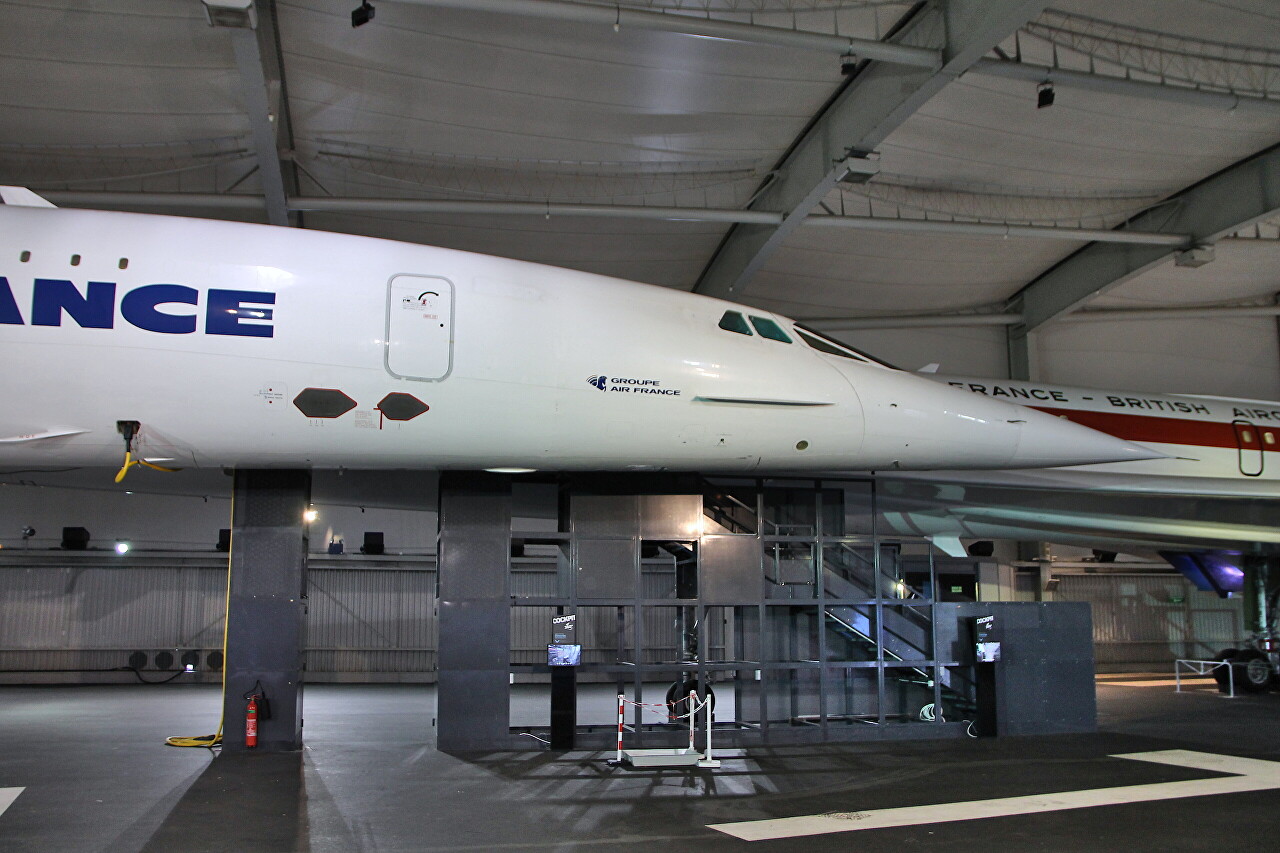 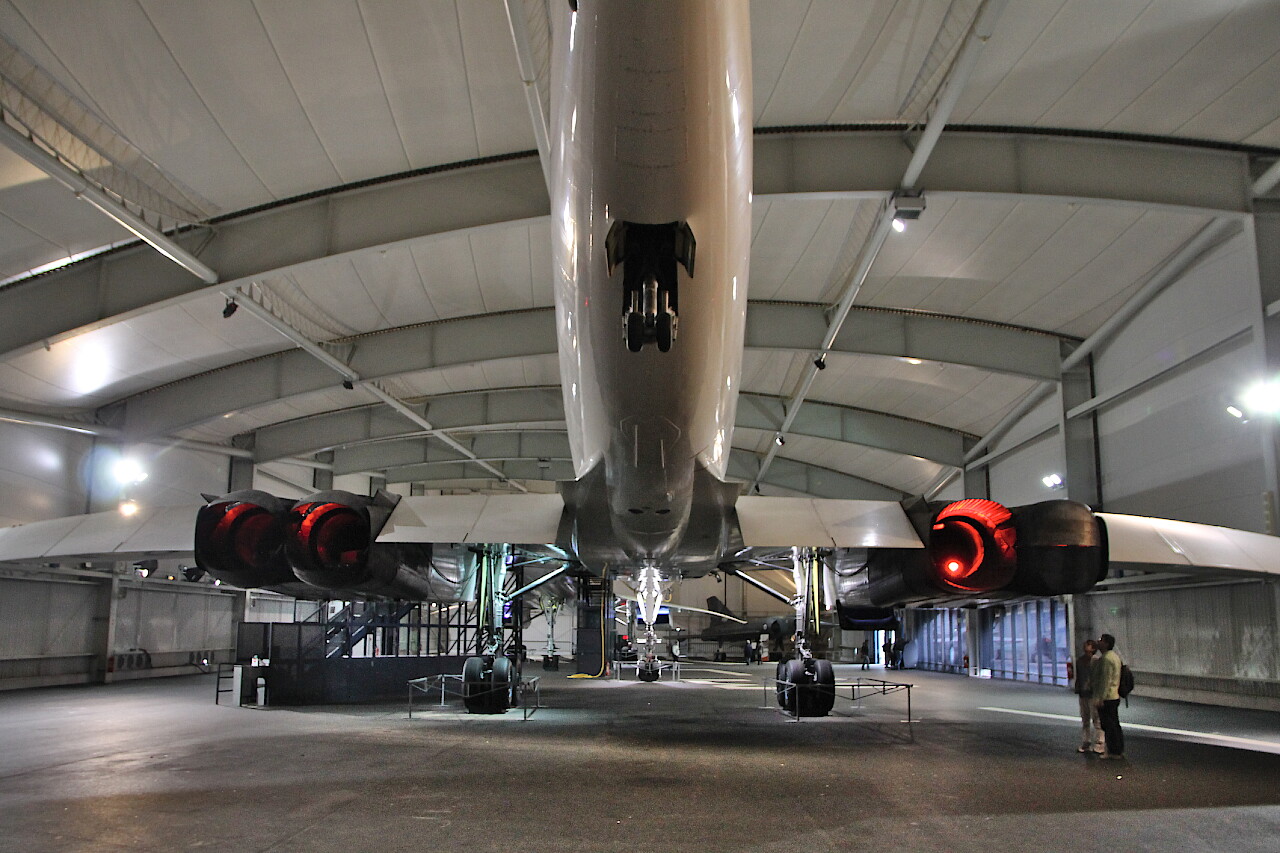 In the hangar is another aircraft directly connected to the Concorde program. This is the Mirage IVA supersonic strategic bomber. This aircraft began flying in 1959 and was the first experience of using a triangular wing and a "tailless" scheme. The data obtained during the Mirage IV test flights formed the basis of the Concorde's aerodynamic scheme. 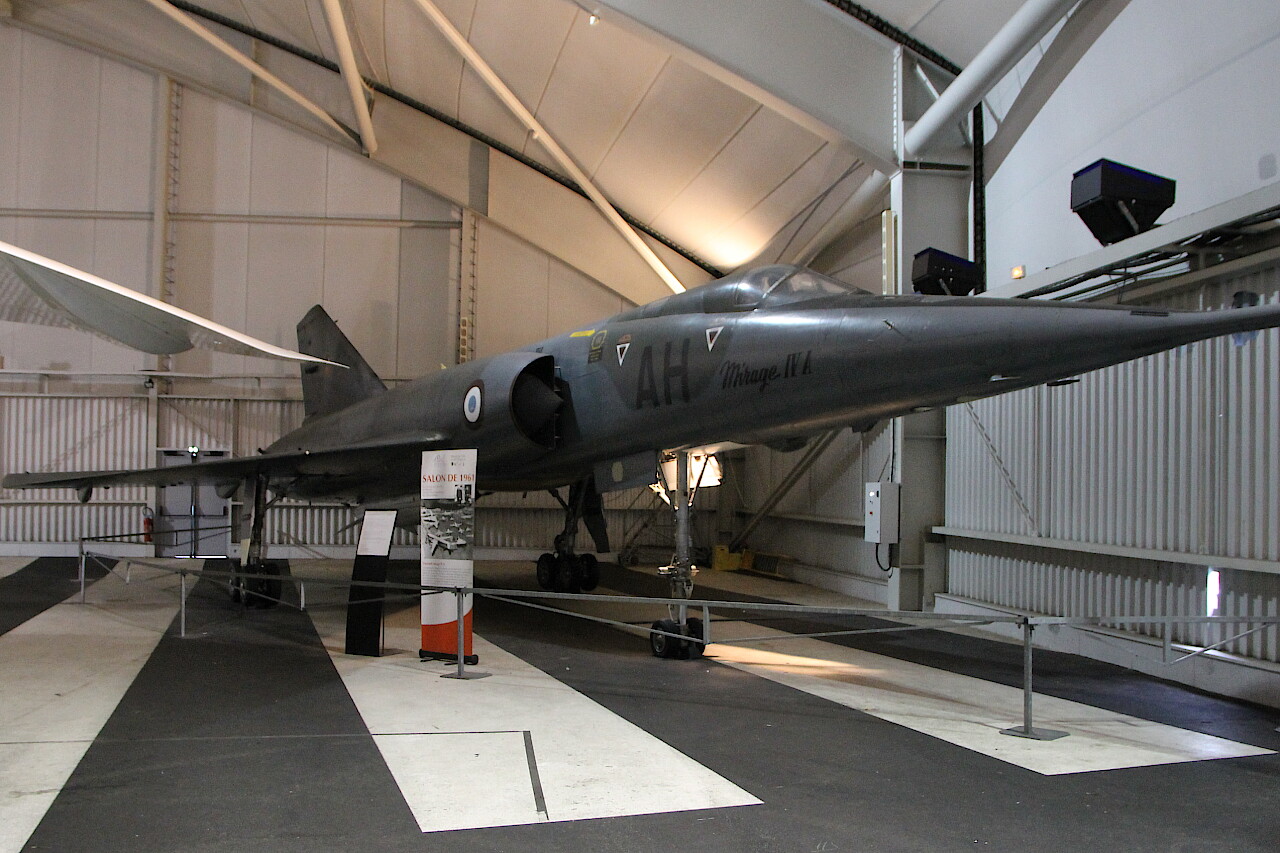 Finally, you can try yourself as a Concorde pilot on the simulator located at the entrance to the hangar. 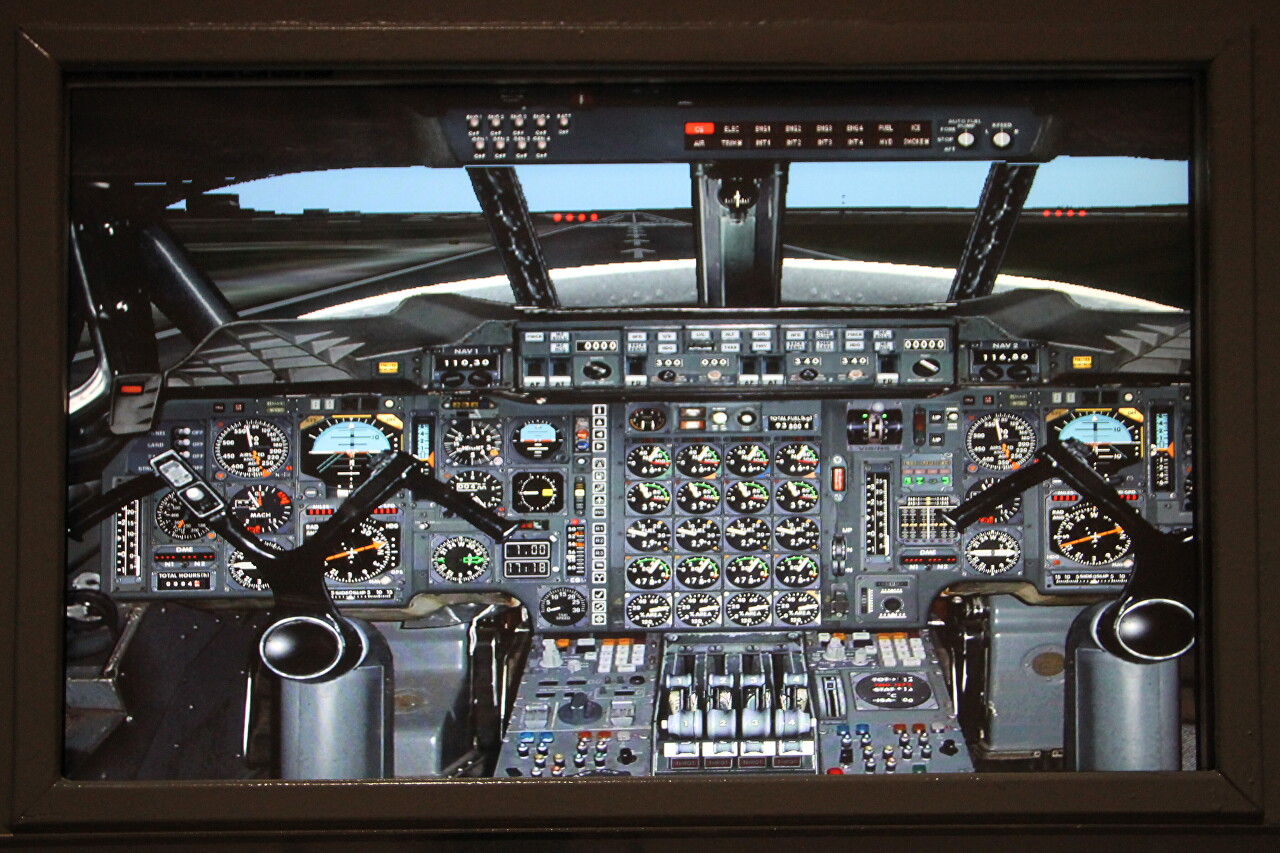 I only managed to take off, and then, as the pilots say, "a mouthful of earth."