One of the oldest churches in Norway is located on the highest hill in Avaldsnes. The sagas tell that a wooden сhurch was built on this site by Olav Tryggvason, but no archaeological evidence has yet been found. 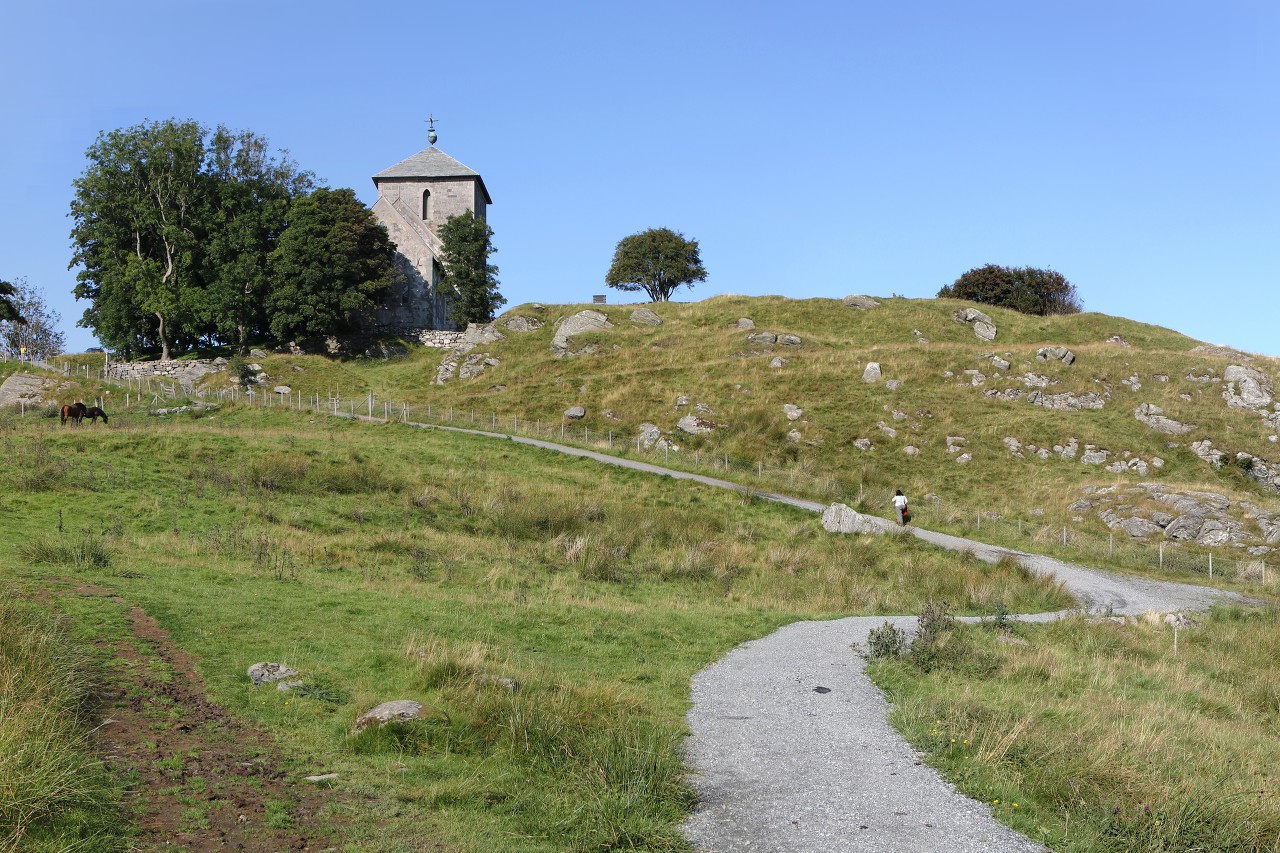 The stone сhurch was ordered to be pardoned by king håkon Håkonsson in the middle of the 13th century, construction was completed in 1320, at that time it was the fourth largest сhurch in Norway. The сhurch was consecrated in the name of St. Olav and it received the status of the Royal chapel of Haakon Magnusson. A school of theology was opened at the сhurch. During the four-century Danish rule, the сhurch fell into disrepair, the floors collapsed, and the two-meter-thick walls began to gradually turn into ruins. In the 17th century, a small wooden chapel was built inside the walls. In the thirties of the 19th century, the сhurch was restored, with almost nothing left of the medieval walls. In the first half of the 20th century, the сhurch was reconstructed again, the stone bell tower was restored, and the building was restored to its original early Christian appearance. The сhurch was re-consecrated in 1929. 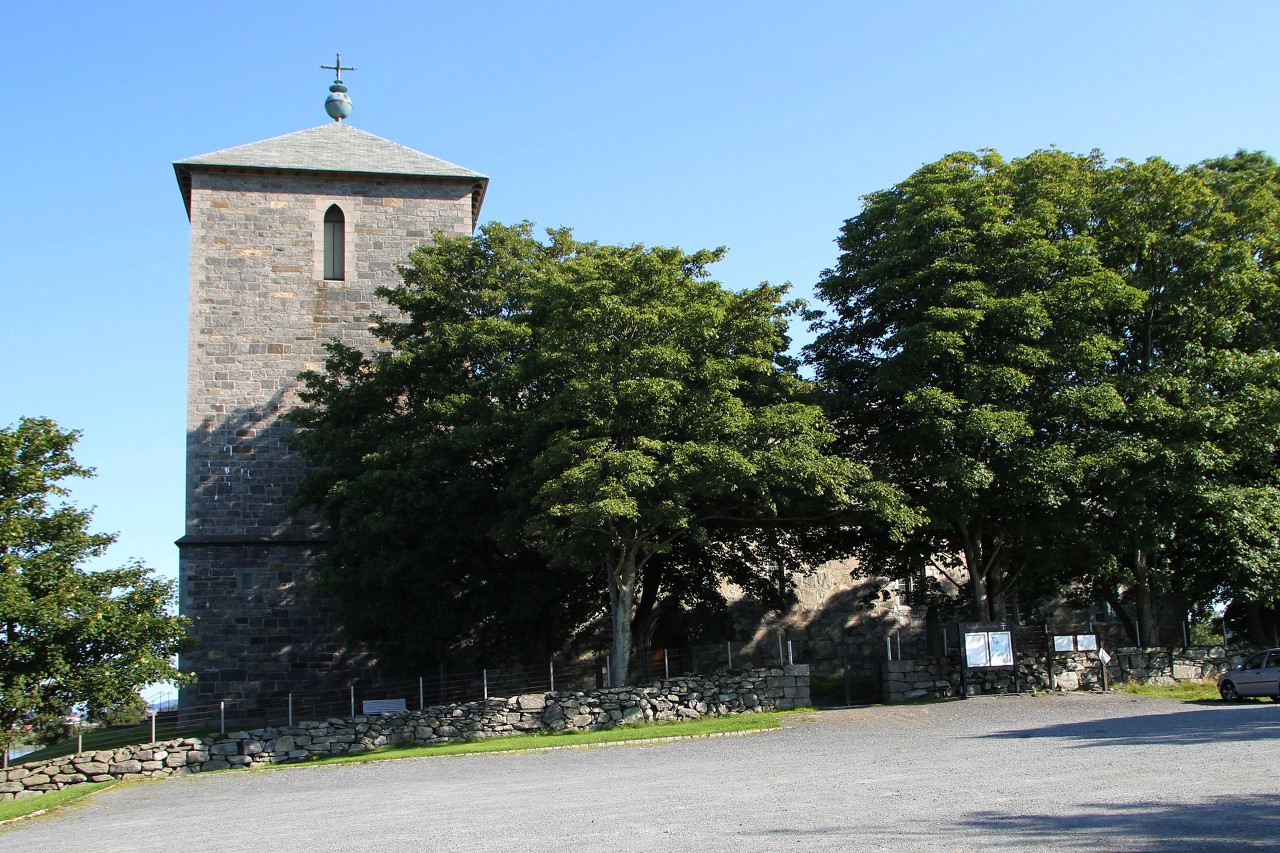 The сhurch tower served as a landmark for ships passing through the Karmsundet Strait for 750 years. In 1834, during the reconstruction, it was demolished, and a wooden spire was built in its place. The modern tower was built in 1926 and follows the shape of the medieval one. During the Second world war, the German occupation authorities wanted to demolish the tower in order to deprive the British pilots who bombed the ship Parking in the Strait of the landmark. However, the Directorate of cultural heritage managed to preserve it, persuading the Germans to cover the сhurch with a wooden masking structure. 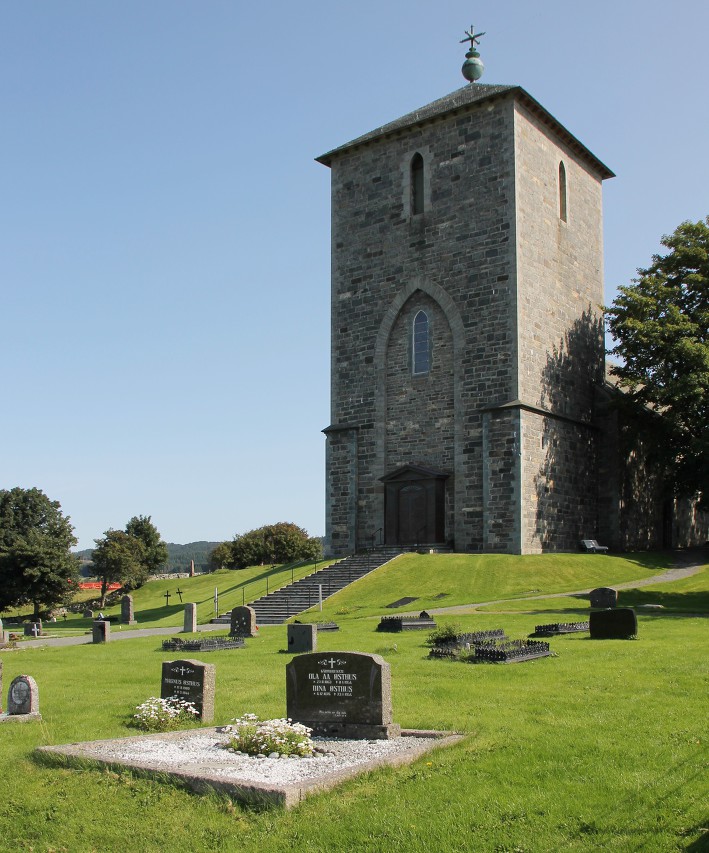 The hipped roof of the tower is covered with small tiles made of layered stone and topped with an unusual cross shape. Three-dimensional crosses are found in Christian churches in the Middle East, but I have not seen such crosses in Europe. But here most likely this form of cross is used for protection from lightning. 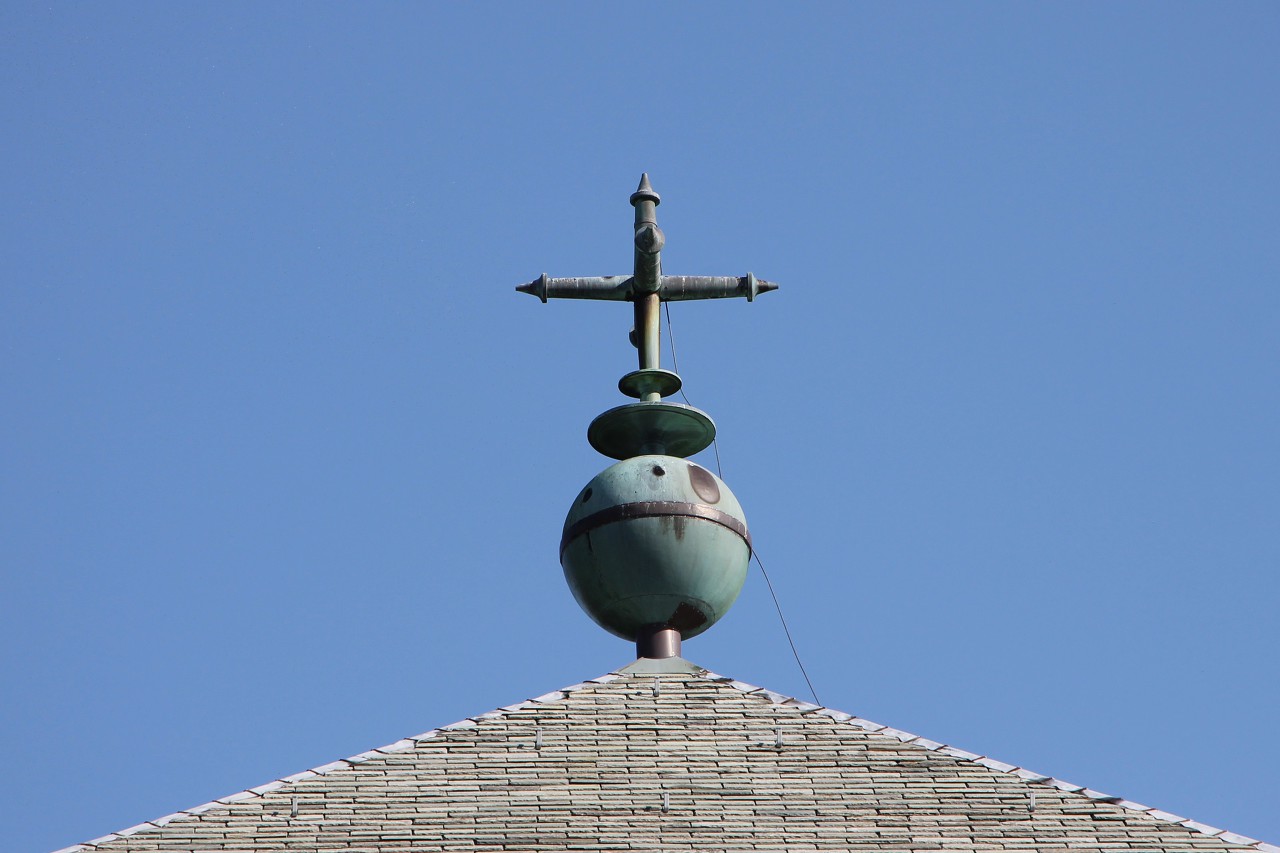 The сhurch is divided into three parts, which are essentially different buildings. In the Eastern part of the altar with a semicircular wooden vault, in the center of a large rectangular nave with a high and flat beam ceiling. 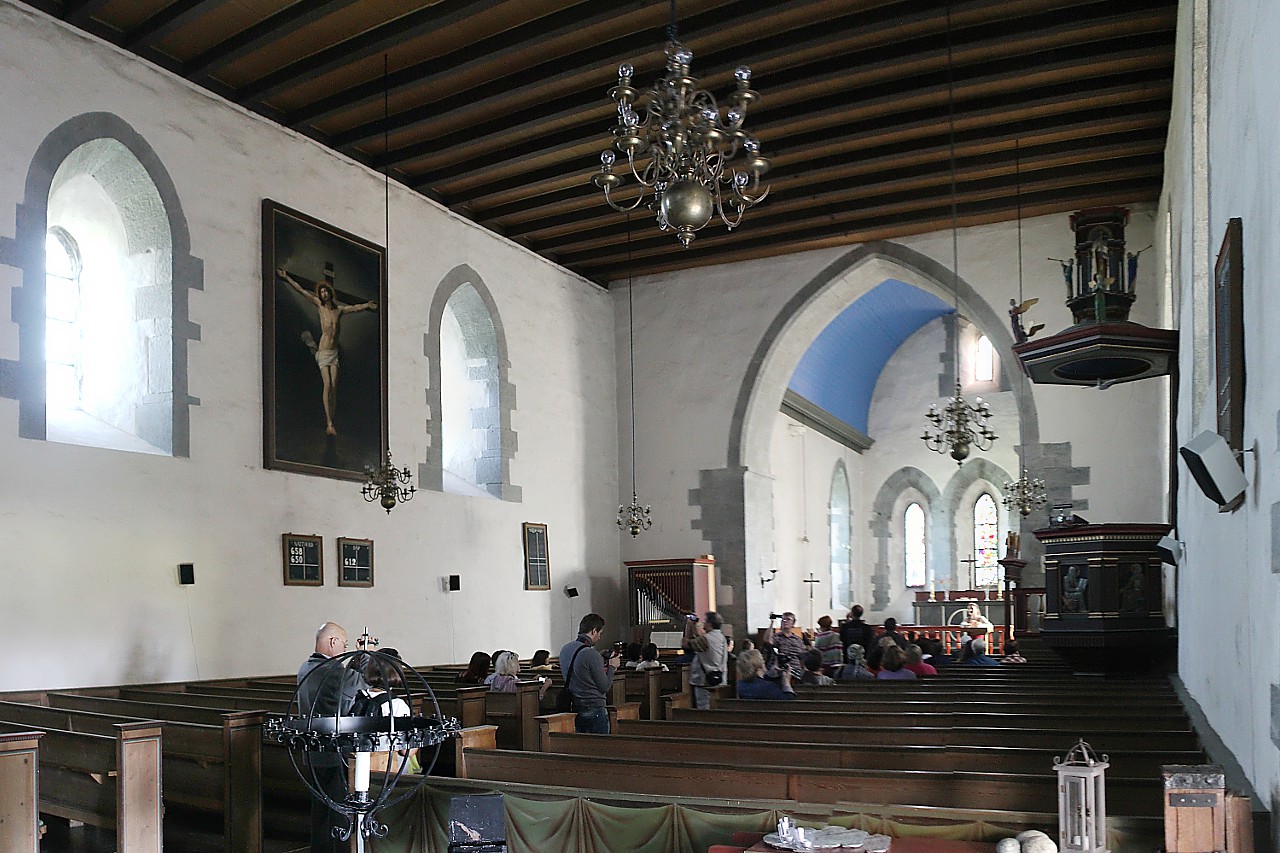 The choir stalls are located in the western part, at the base of the tower. 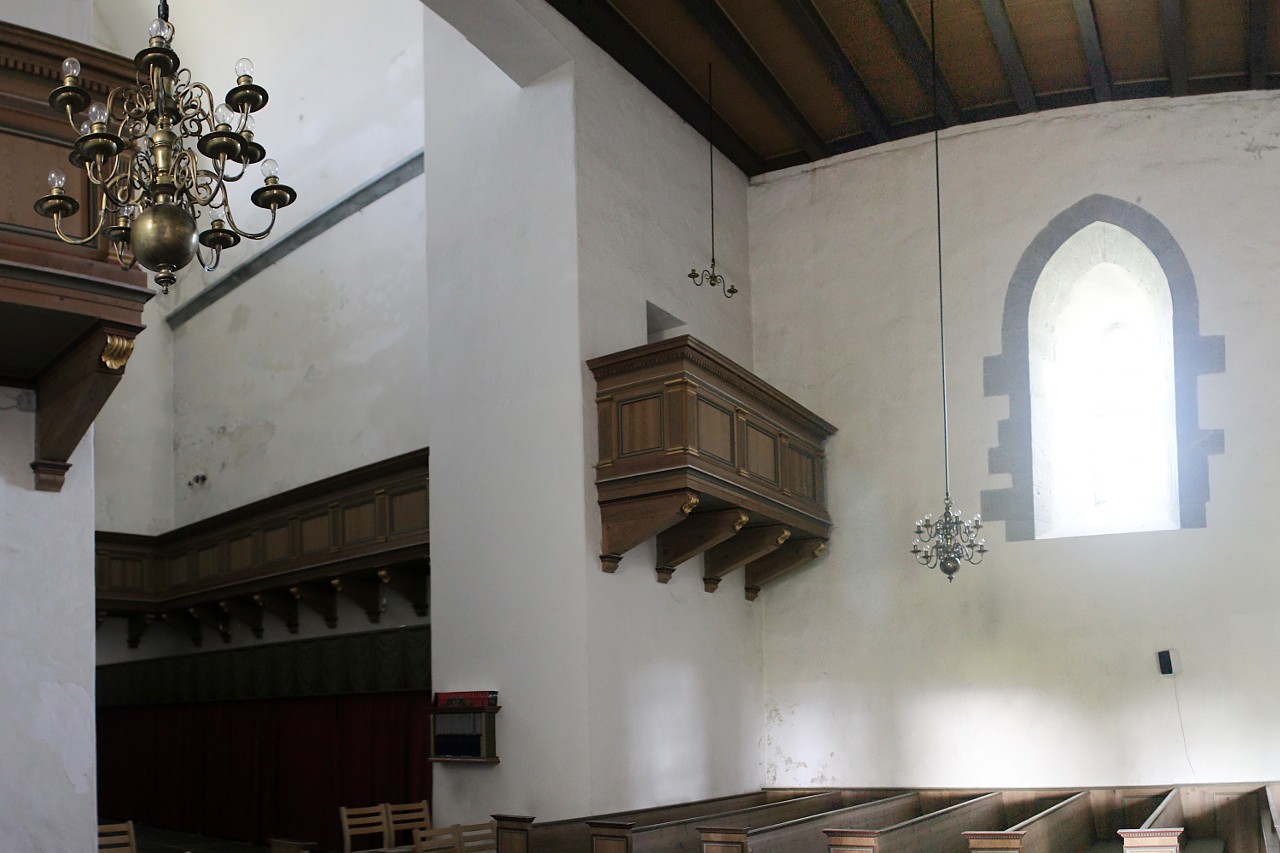 The interior of the Church is very bright, thanks to the large lancet windows. 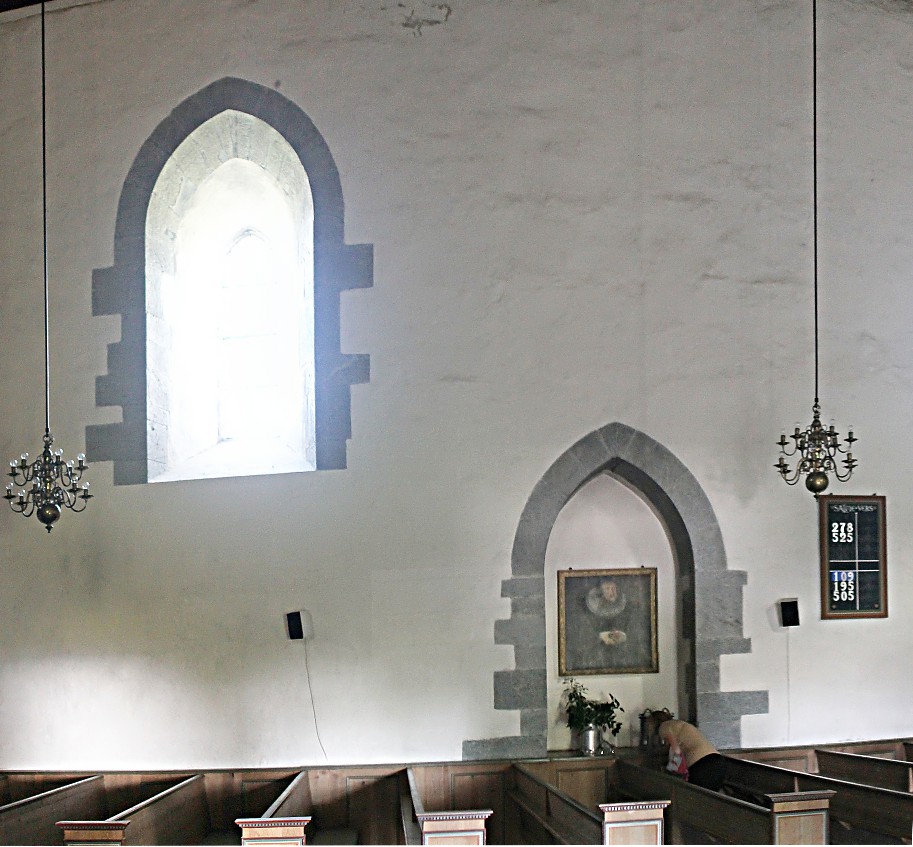 None of the utensils from the Middle Ages have been preserved. Everything that can be seen now is made during the restoration of the church in the first half of the 20th century. 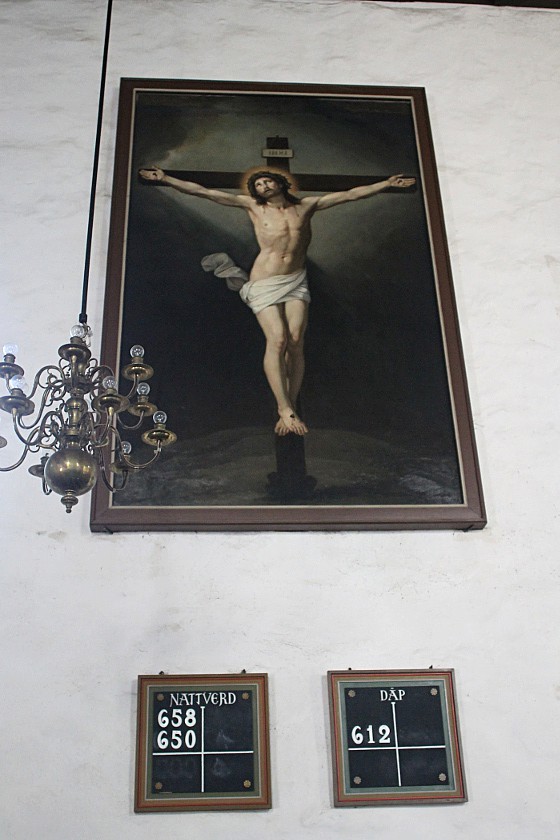 The new altar, pulpit, choir and pews were designed by the architect Eyvind Moestue. 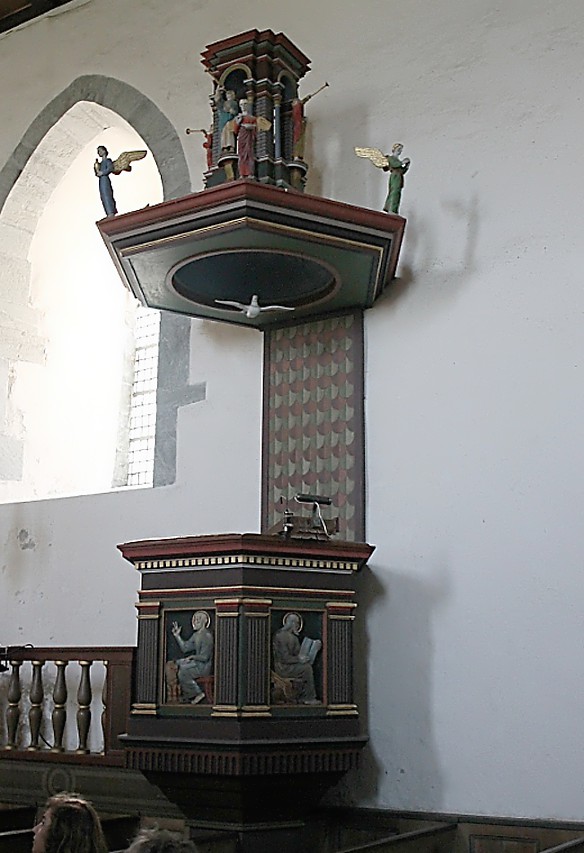 In the interior design, you can guess the features of the Art Deco style. 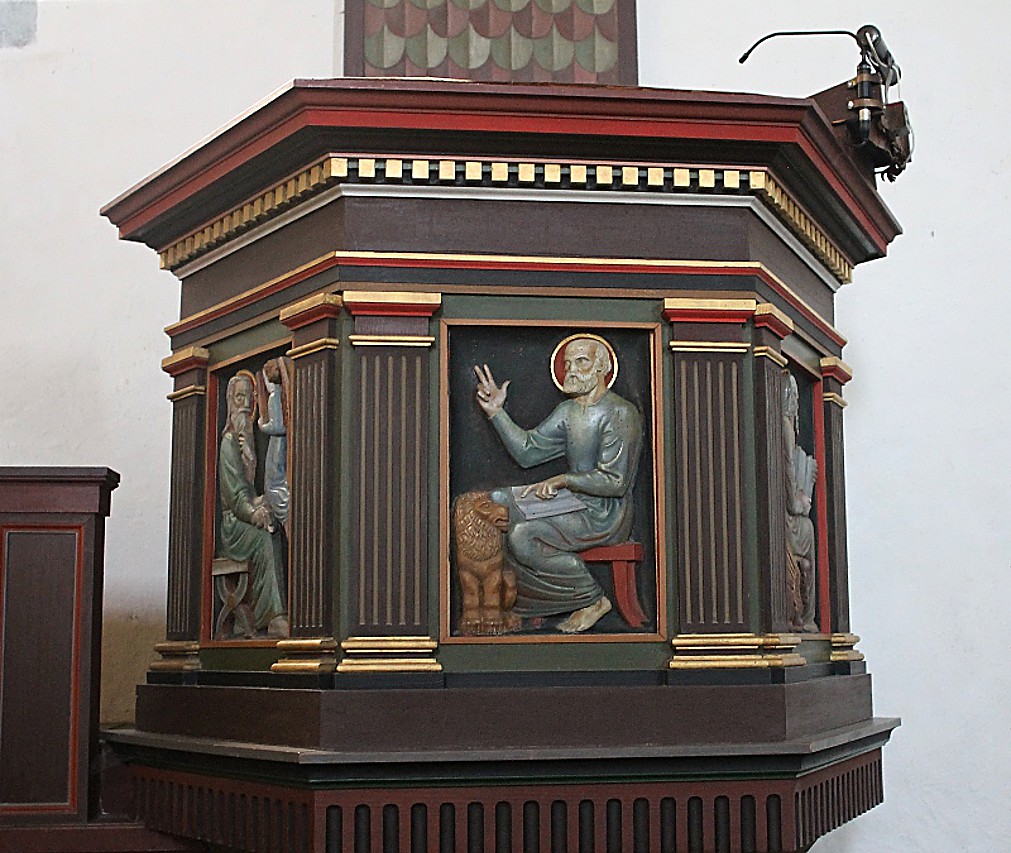 To the left of the arch separating the chancel from the nave is a small organ. To the left of it, a disassembled drum kit is visible. While we were looking around the church, the young people gathered it and uncovered other instruments, clearly preparing to arrange a rehearsal here. 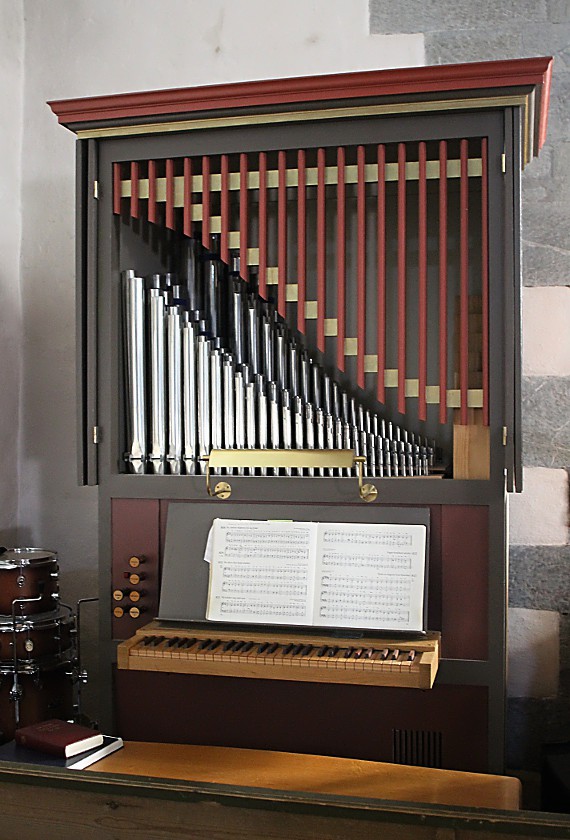 In 1950, the church celebrated its seven hundredth anniversary. For this event, new stained glass Windows were made, showing the main biblical Events-Baptism, Ascension and Resurrection. The stained glass windows are made by the artist Bernhard Greve. 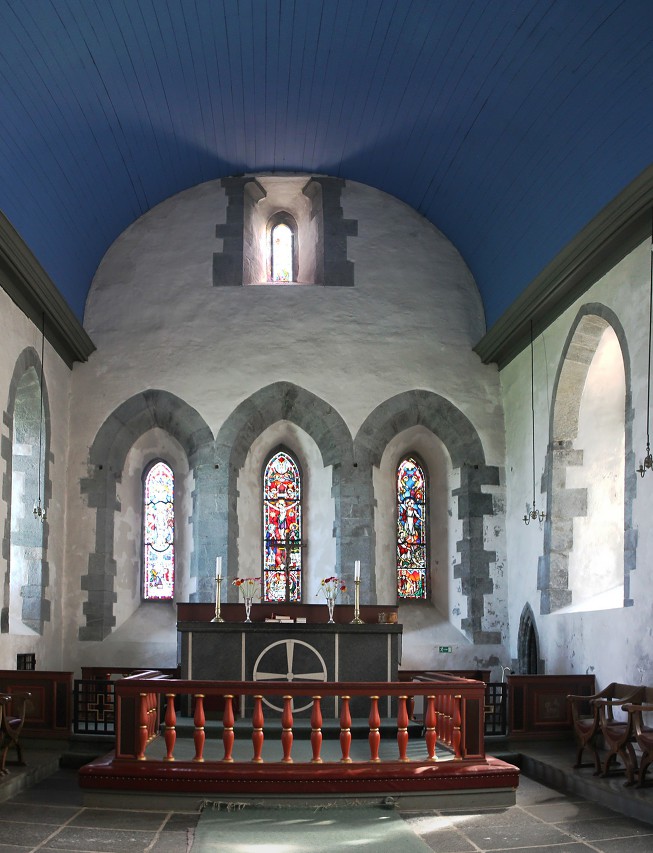 Close to one of the walls of the church is a pagan stone stele, installed by the Vikings long before the adoption of Christianity. This 7.2 meter high stone needle is one of the tallest Viking stelae in Norway and is called the "Needle of the virgin Mary". The builders of the Christian temple treated the pagan relic with respect, erecting a wall just half a meter from it. However, the pressure of the massive walls of the temple changed the structure of the ground and the stele began to gradually tilt, each year bringing the top closer to the wall of the church. According to an ancient legend, when the top of the stele touches the wall of the temple, the end of the world will come. For centuries, the servants of St. Olav's church had been quietly sharpening the top of the needle, trying to delay the Apocalypse. Now the distance is just over 9 centimeters. 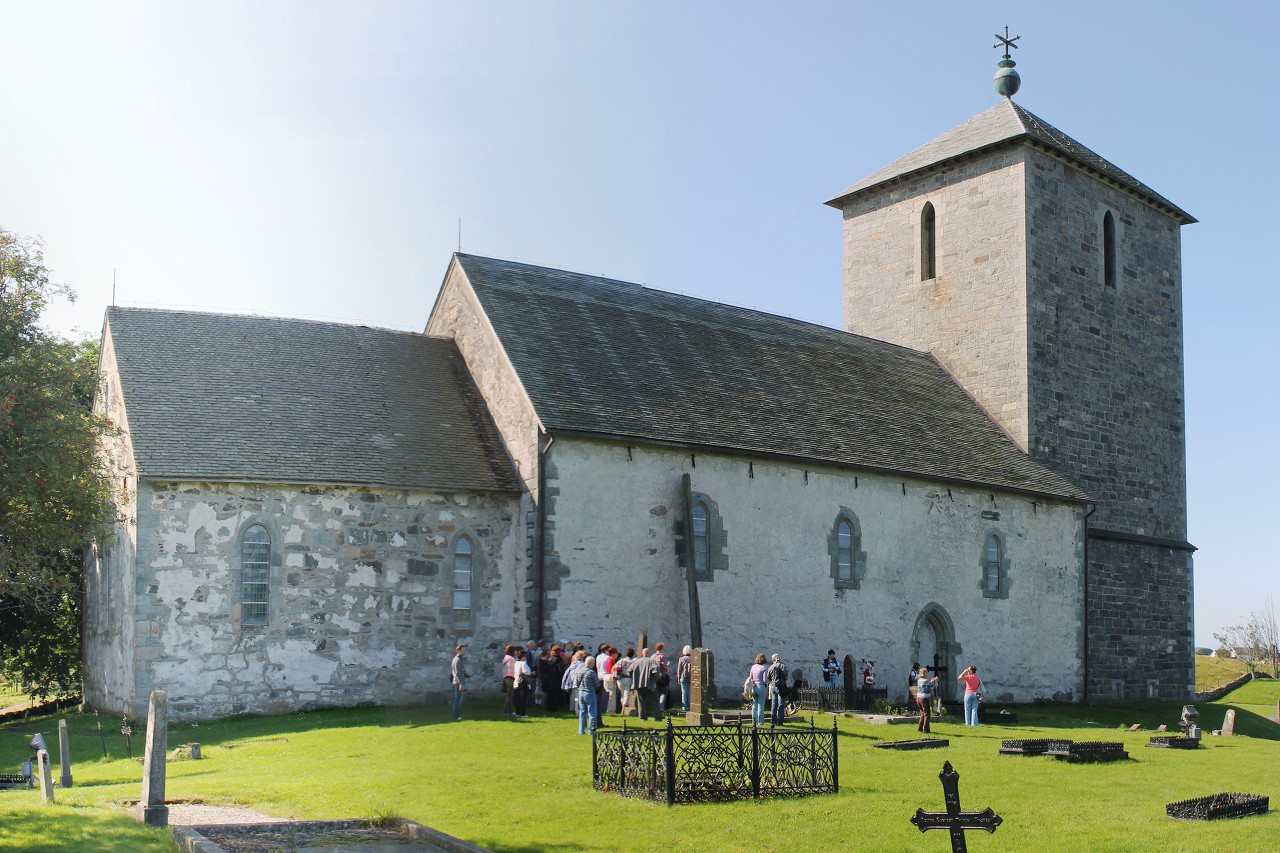 There are several burial mounds around the Church, perhaps one of them is the tomb of king Harald Hårfagres. According to the sagas, he was buried in Avaldsnes. 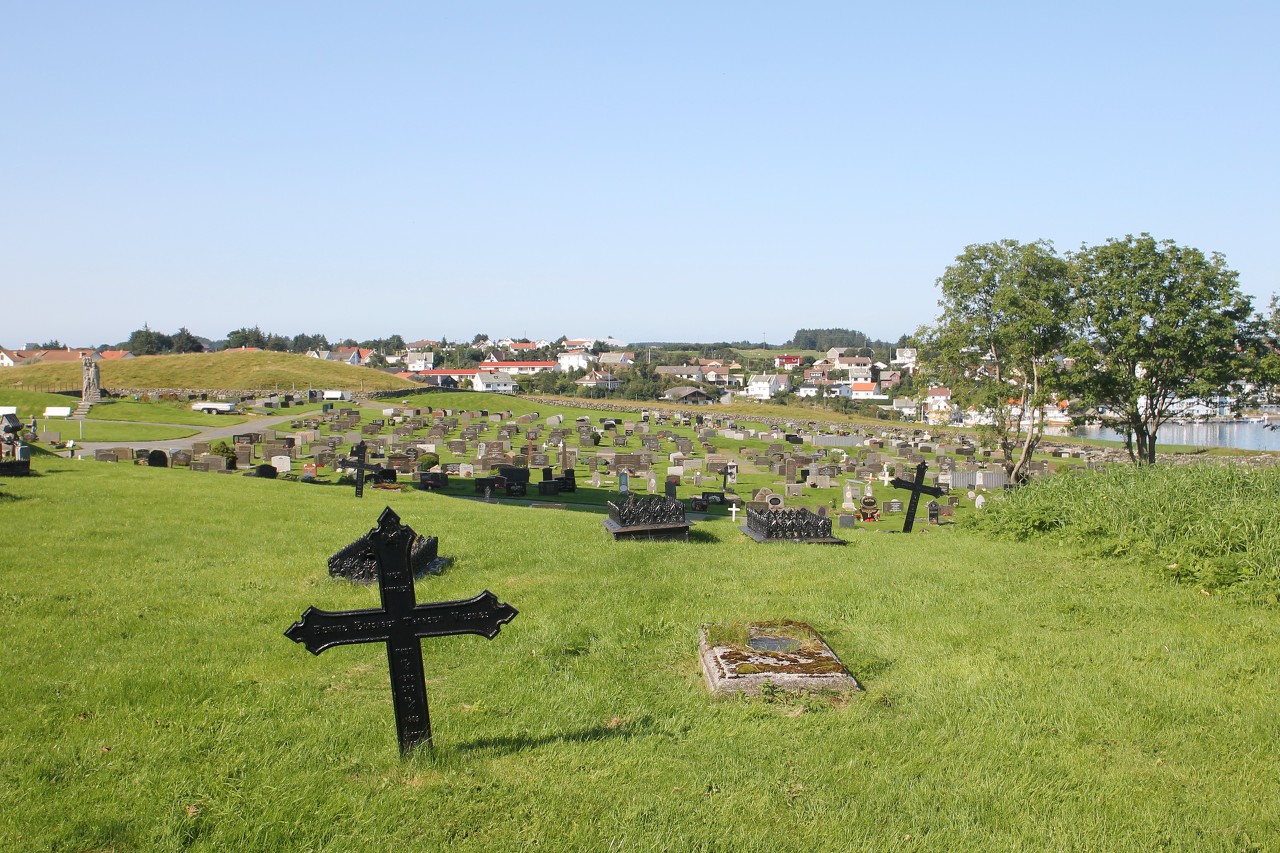 Now the church is surrounded by a vast and well maintained cemetery. 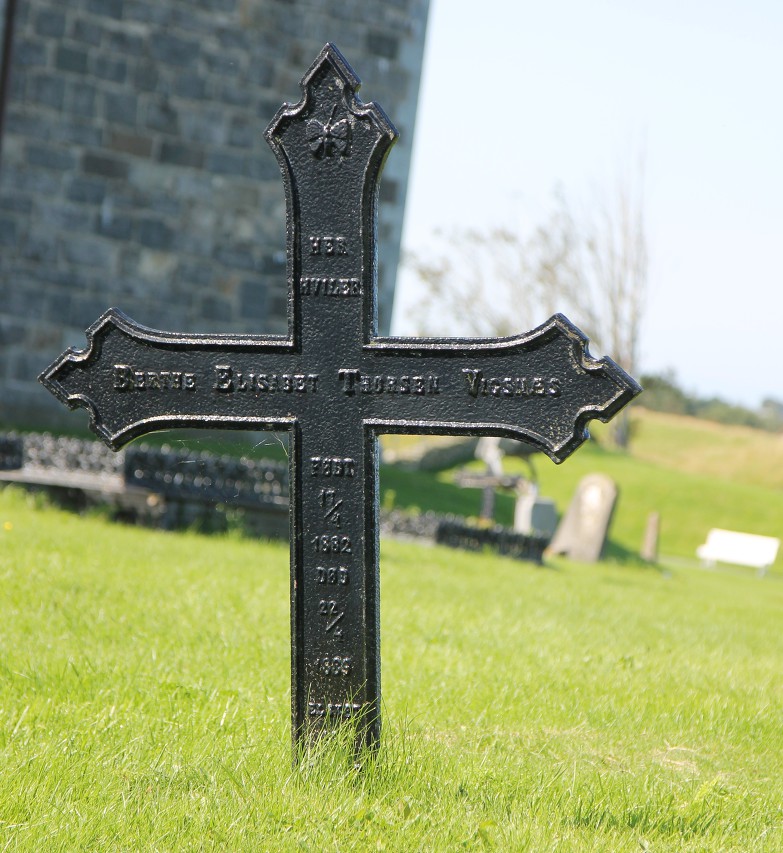 At the gate of the cemetery there is a monument to local residents who died in world war II. 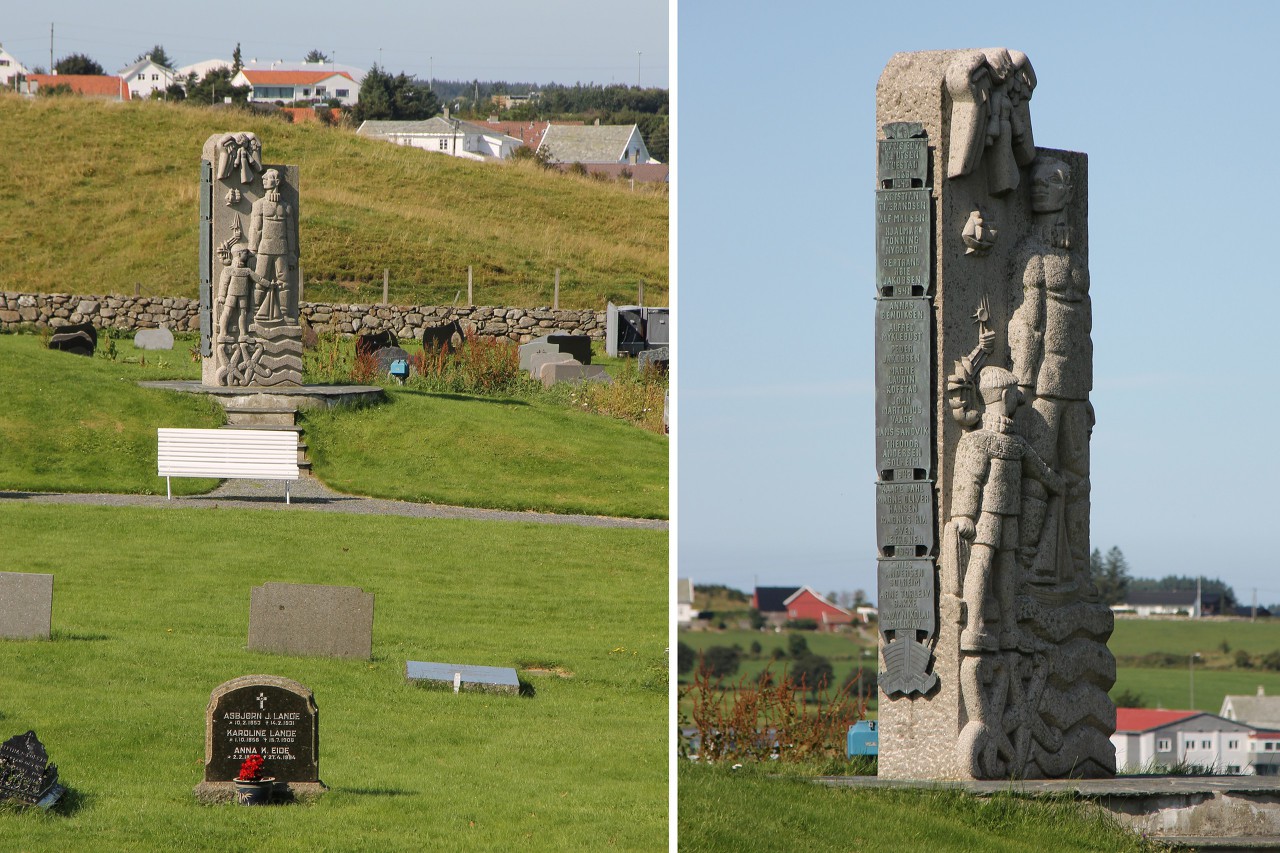