In may 2013, in one of the halls of the Montjuic fortress of Barcelona, photo documents from the German military archives were put on public display, dedicated to one of the unsightly episodes of the Spanish Civil war-the actions of an air unit known as the Condor Legion. 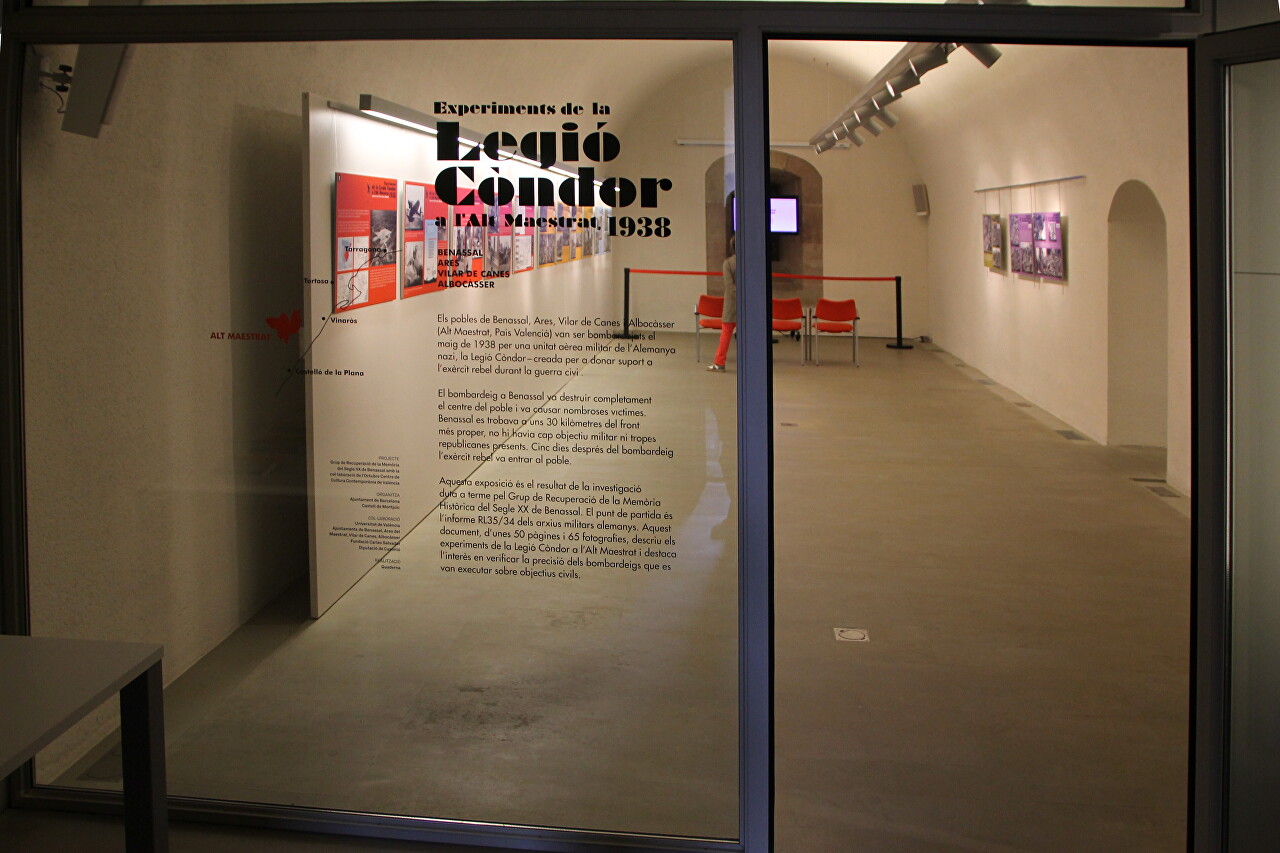 Pilots of the Condor Legion where volunteers from the Luftwaffe who fought on the side of Franco. The connection was organized in June 1936 and lasted until March 1939. The unit was armed with up to 150 German-made aircraft, with a total of 5.5 thousand pilots and ground specialists passing through the Legion. The German command, in addition to supporting the "close in spirit" Generalissimo Franco, pursued the goal of testing and fine-tuning its aircraft in combat conditions. I must say that the Spanish dictator deceived Hitler, and did not enter the Second World war on his side-Spain observed neutrality. Franco limited himself to sending a "Blue division" to the Eastern front, consisting of volunteers, who for the most part did not go there from a good life. 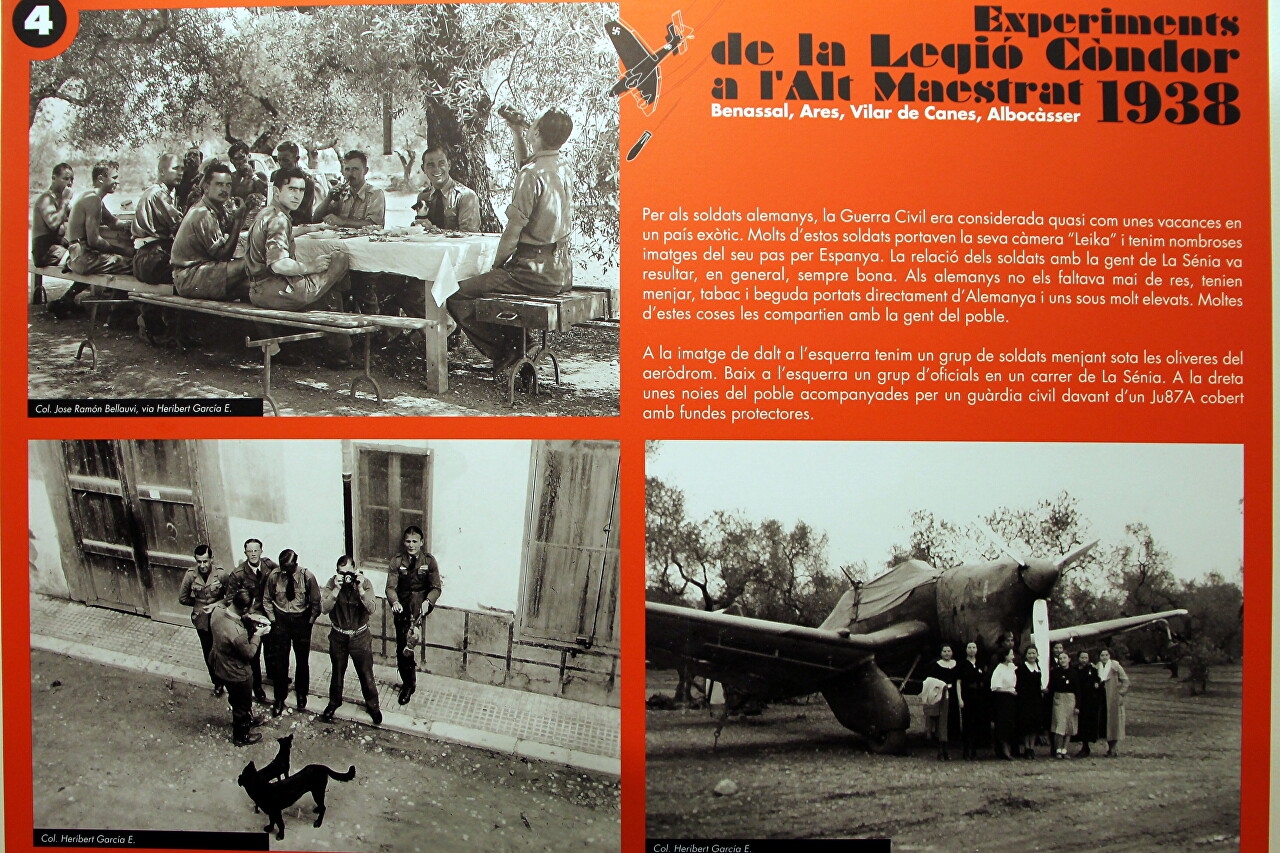 In April 1938, "experimental" (so in the source) bombing was carried out on a number of Spanish villages in the territory occupied by the Republicans. 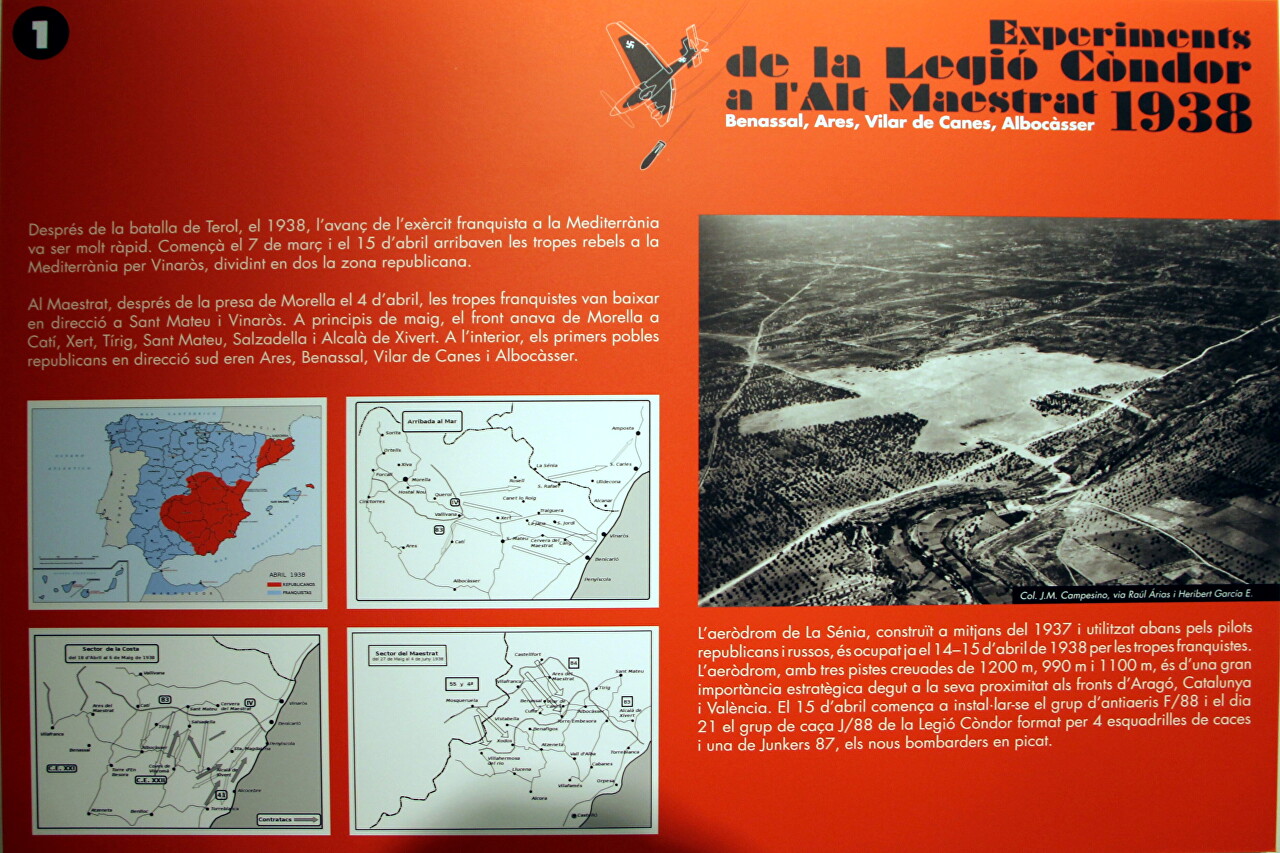 This was the first experience of combat use of the new modification of the Ju-87A Stukas dive bomber. If the other planes were eventually handed over to the Spaniards, the Stukas returned to Germany in full force.

Ju-87 Stuka (short for Sturzkampfflugzeug, which translates as "dive bomber"), was mass-produced since 1936 and is one of the symbols of fascist aggression and barbaric bombing. At the first stage of the all-European slaughter, these machines acted very effectively, including producing an indelible psychological effect on the enemy, acting with impunity in an environment of absolute air superiority. Surprisingly, this well-known aircraft was not released in such large quantities - only about 6.5 thousand cars, and although it was easy prey for modern allied fighters, it was used until the end of the war. 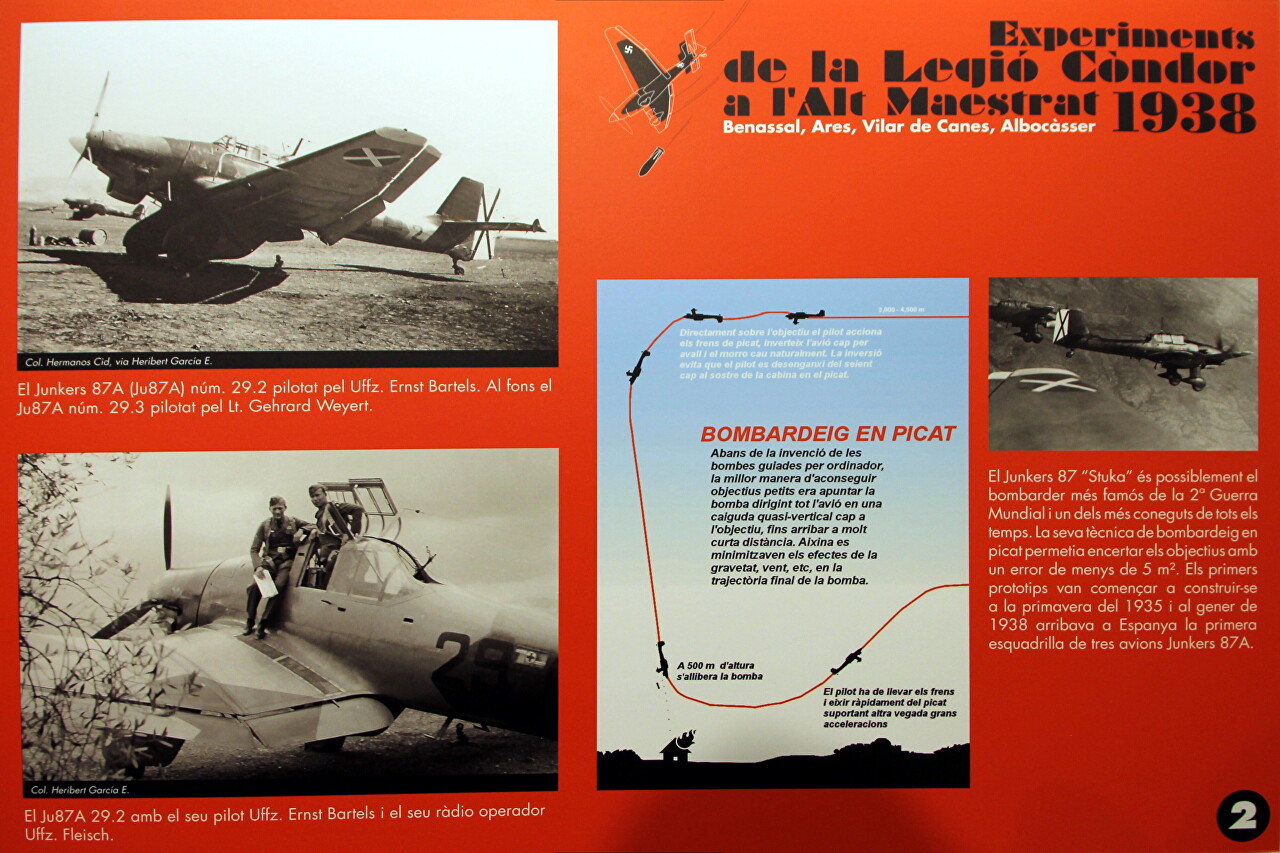 The modification with the letter "A" could carry a half-ton aerial bomb, although only one pilot could fly, without a shooter, and with a small fuel reserve. The bomb is 2 meters long and 47 centimeters in diameter. The warhead consisted of 260 kilograms of a mixture of amatol and TNT, in equal proportions or 40/60. 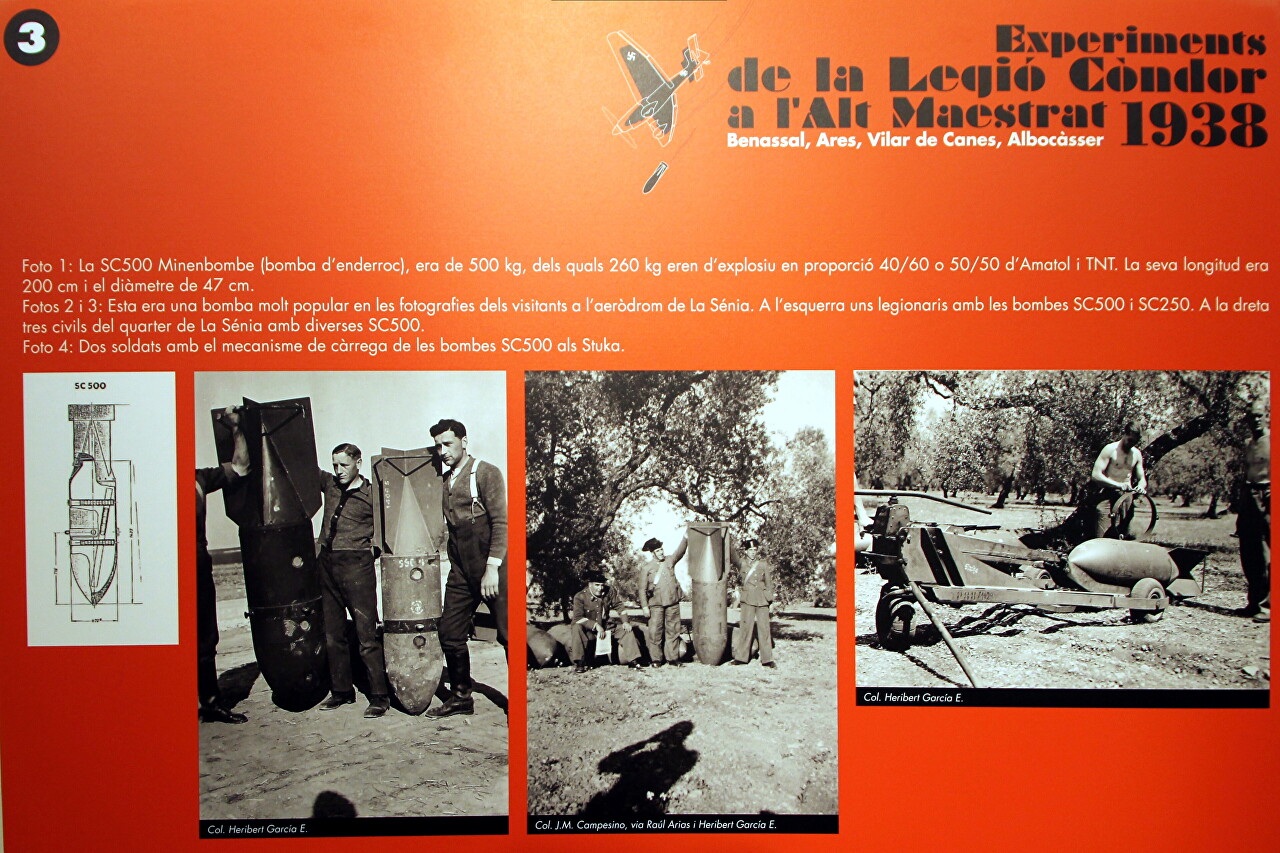 The limited fuel supply determined the choice of targets just 30 kilometers behind the front line. The "Experiment" included dropping bombs from altitudes of 990, 1100 and 1200 meters. 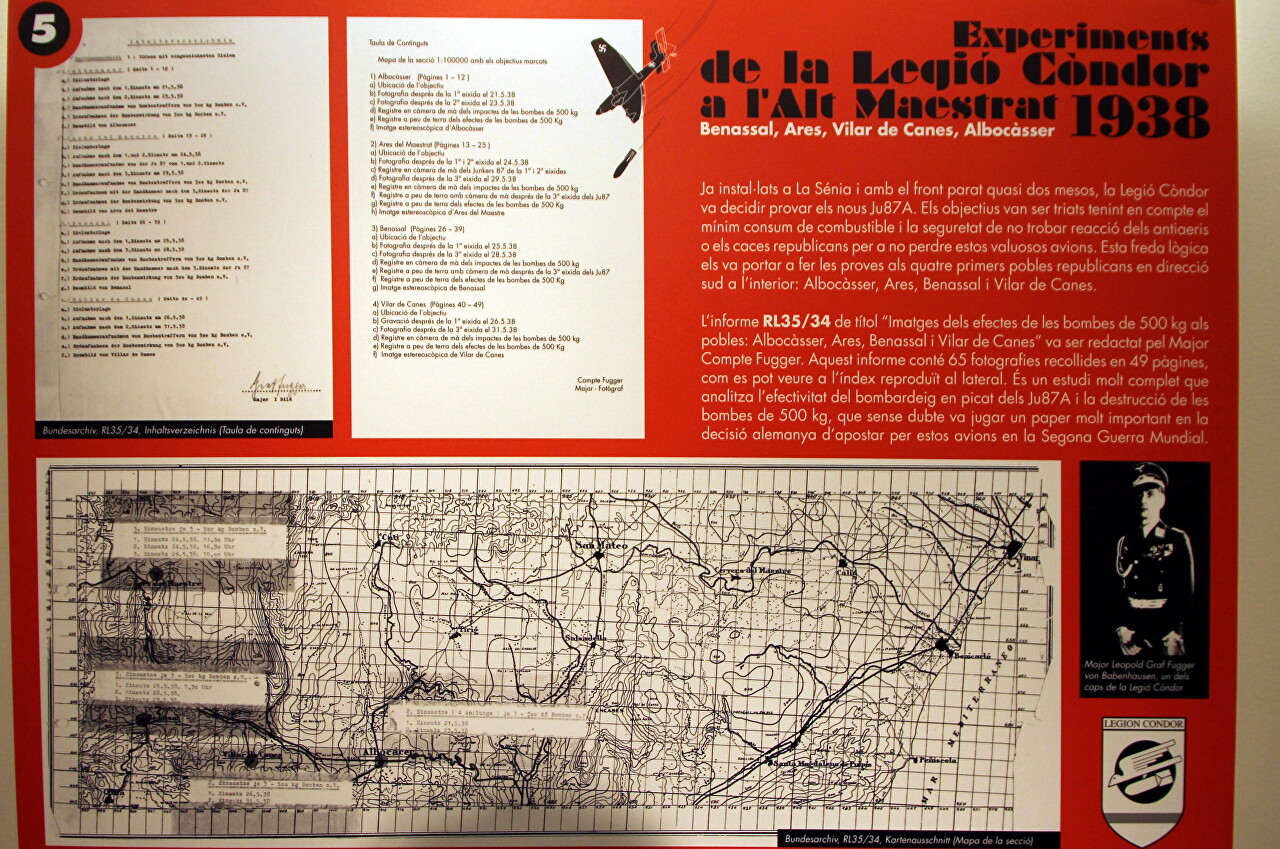 The first object was the small Valencian town of Benassal, located near Castellon de La Plana. 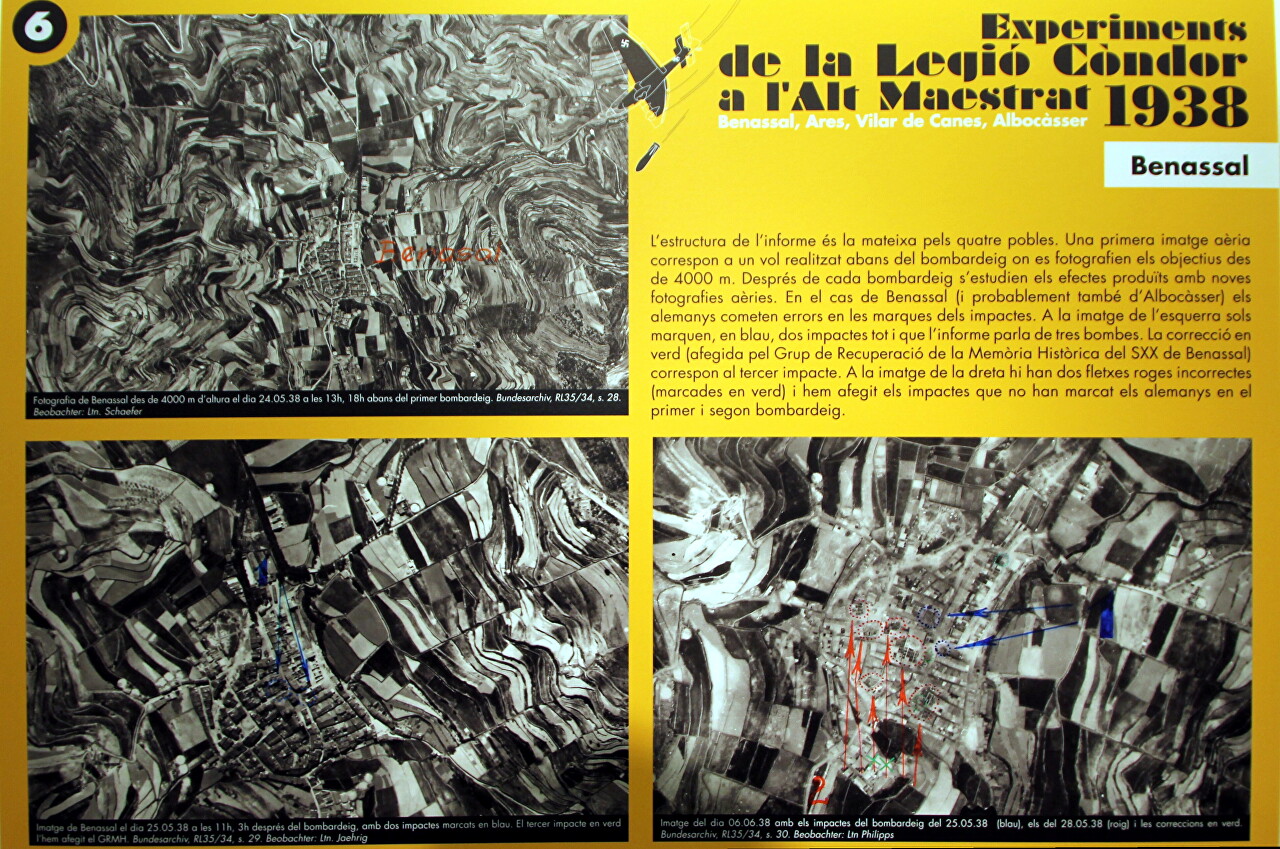 The raid was carried out on may 25 at 7:30 am, when many residents were in their homes. 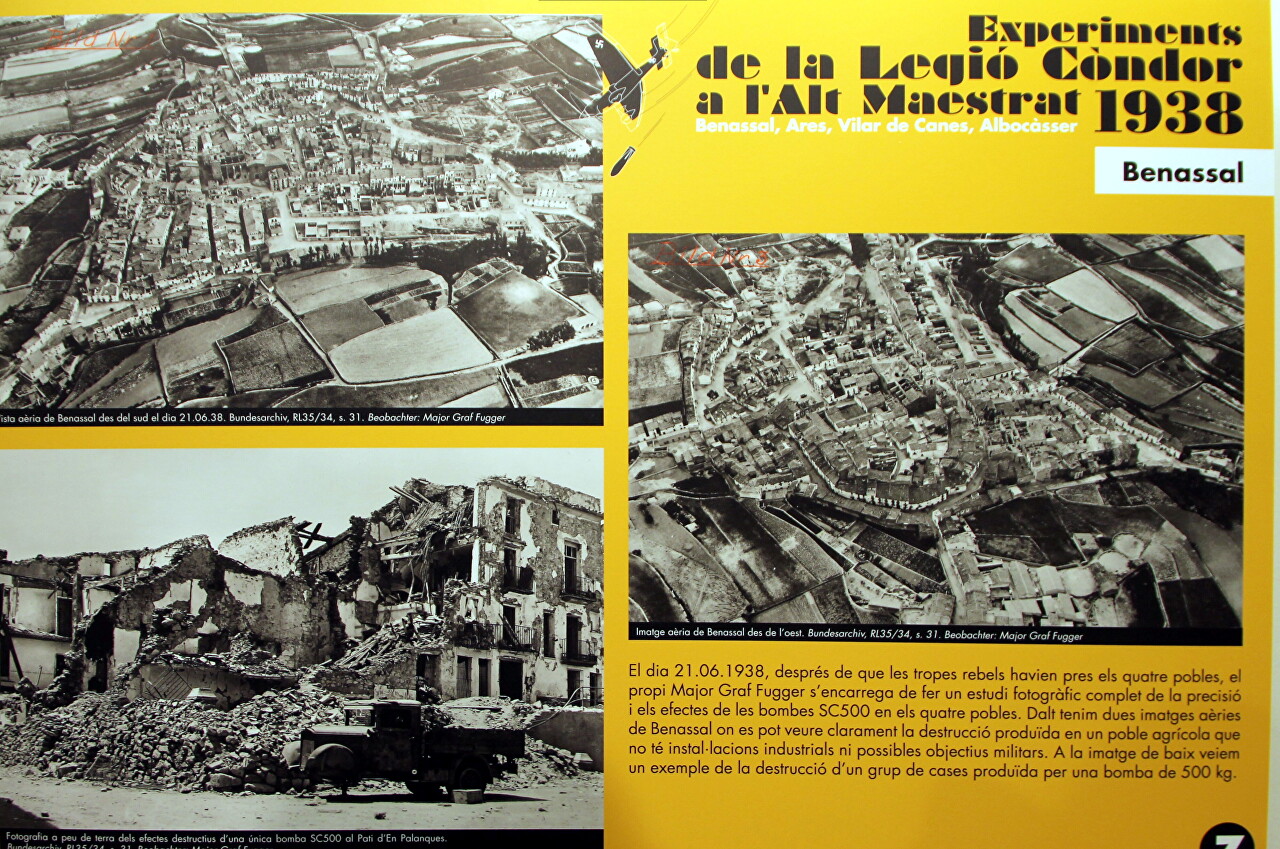 The destruction caused by the SC500 bomb was horrific. 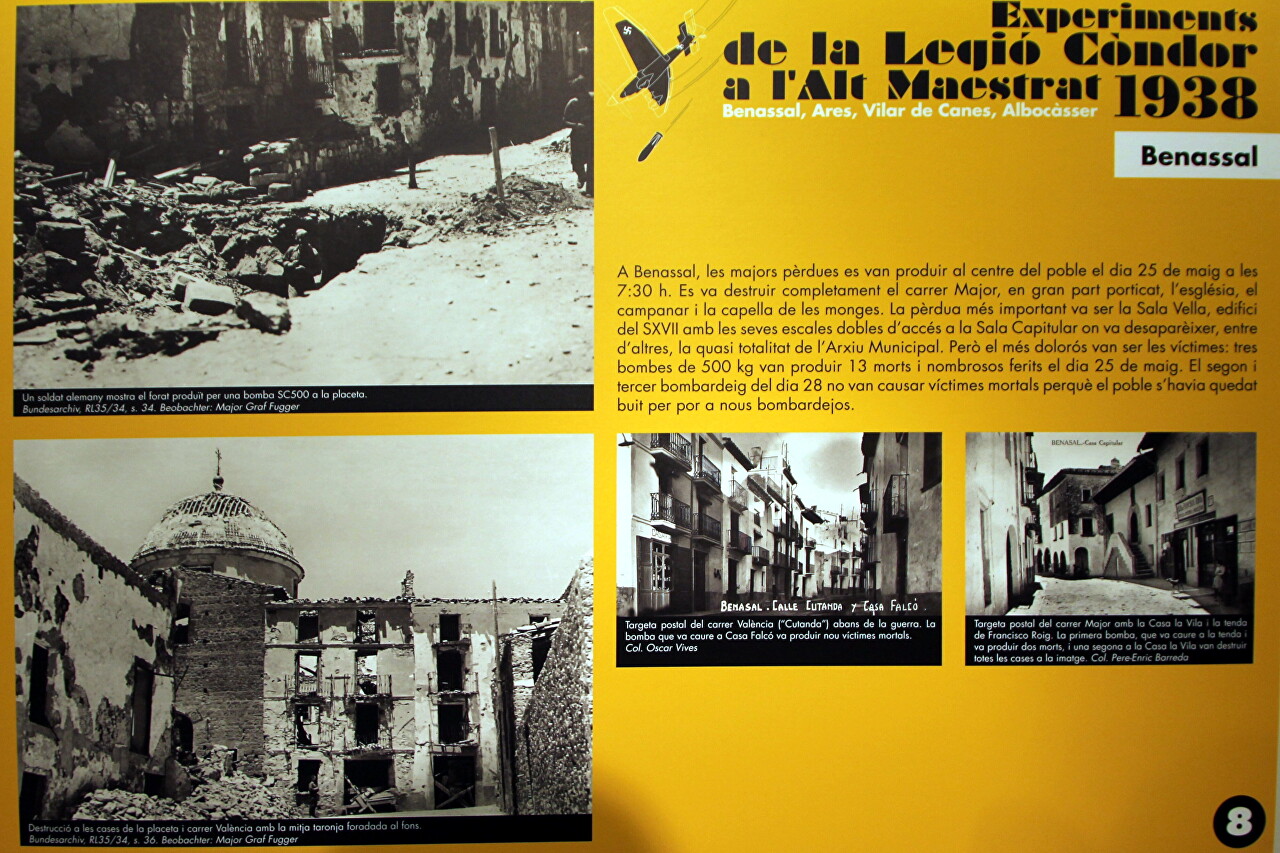 The blast wave collapsed the vaults of the Church, built in the 17th century. 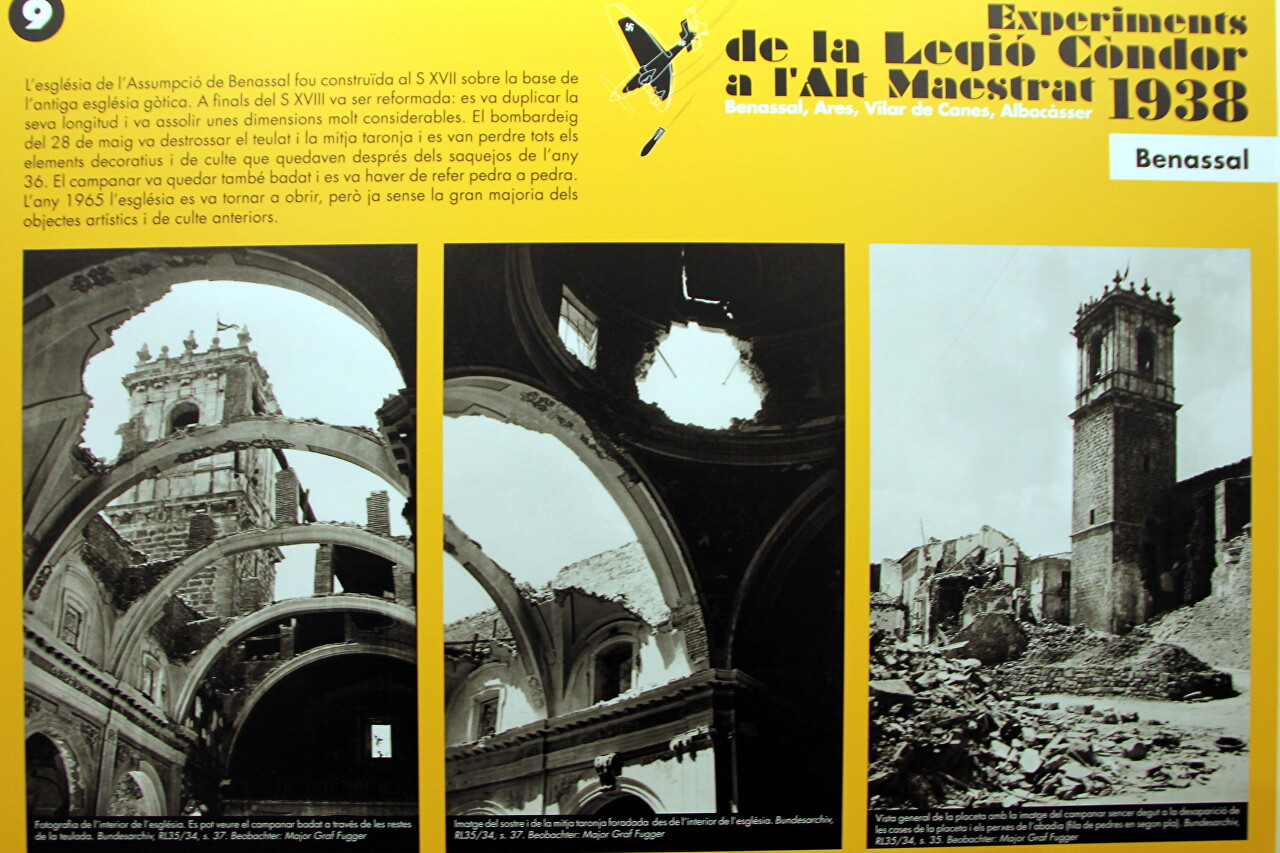 The next attack was carried out on may 29 in the village of Ares del Maestrat. 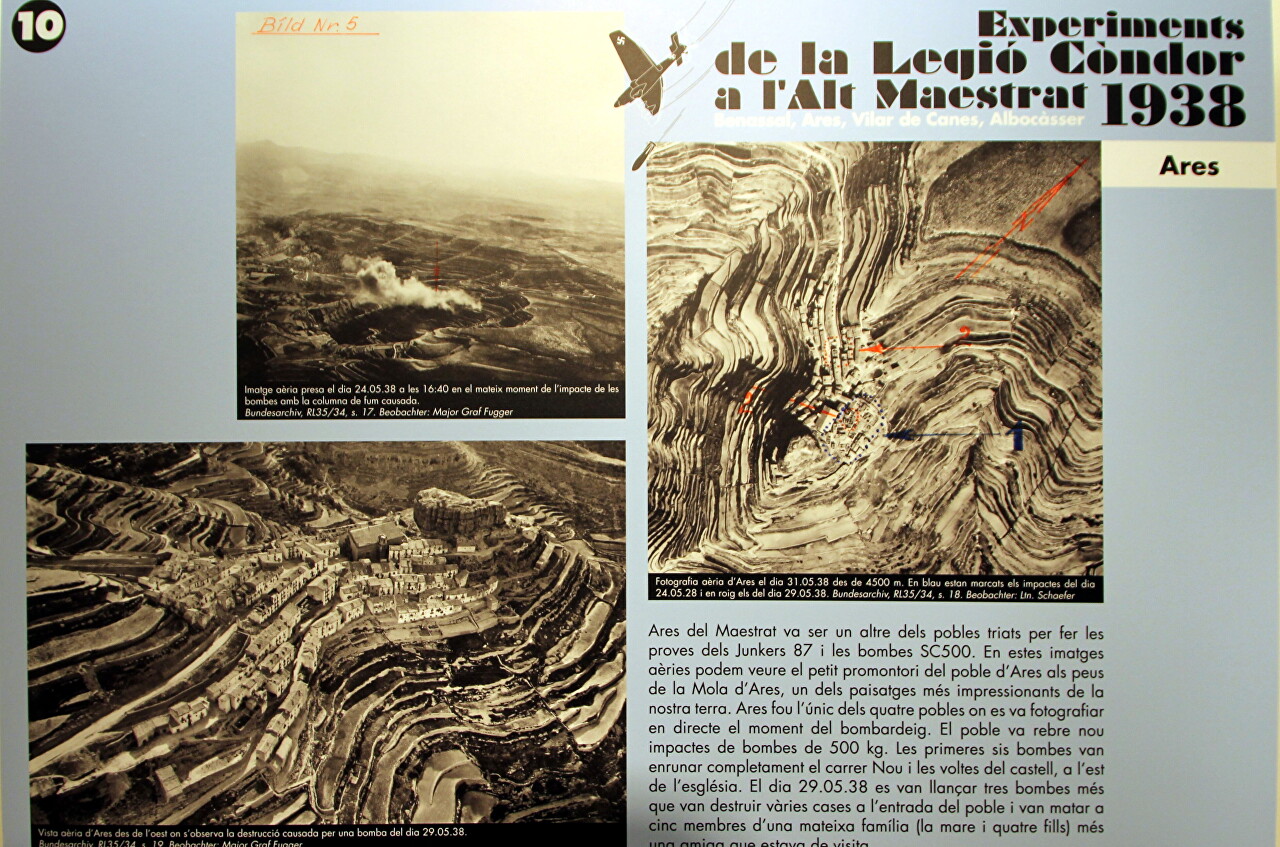 As a result, about 40 houses were destroyed - most of the buildings of a small peasant settlement. 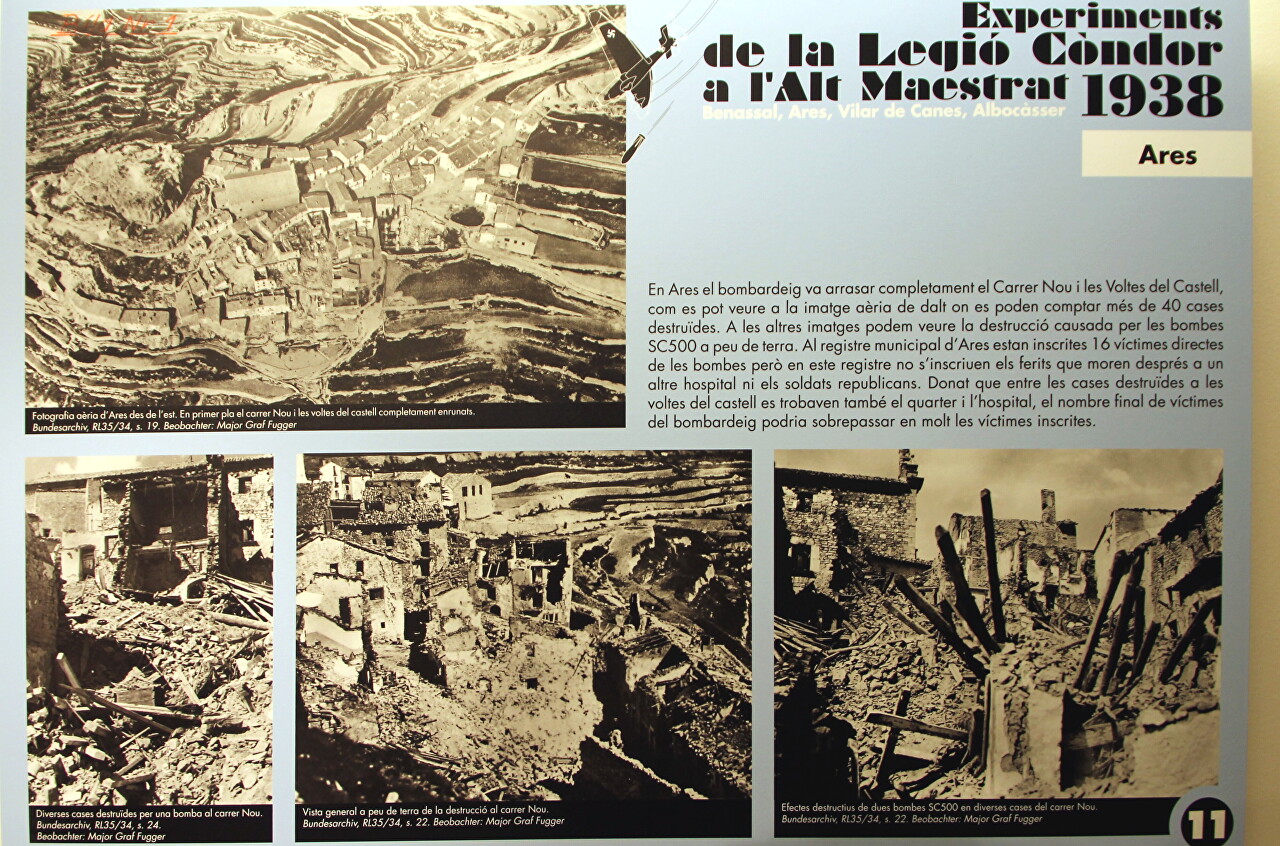 Vilar de Canes, with a population of about 400, was bombed twice, on 26 and 31 may. Despite the great destruction, only 3 people were killed. 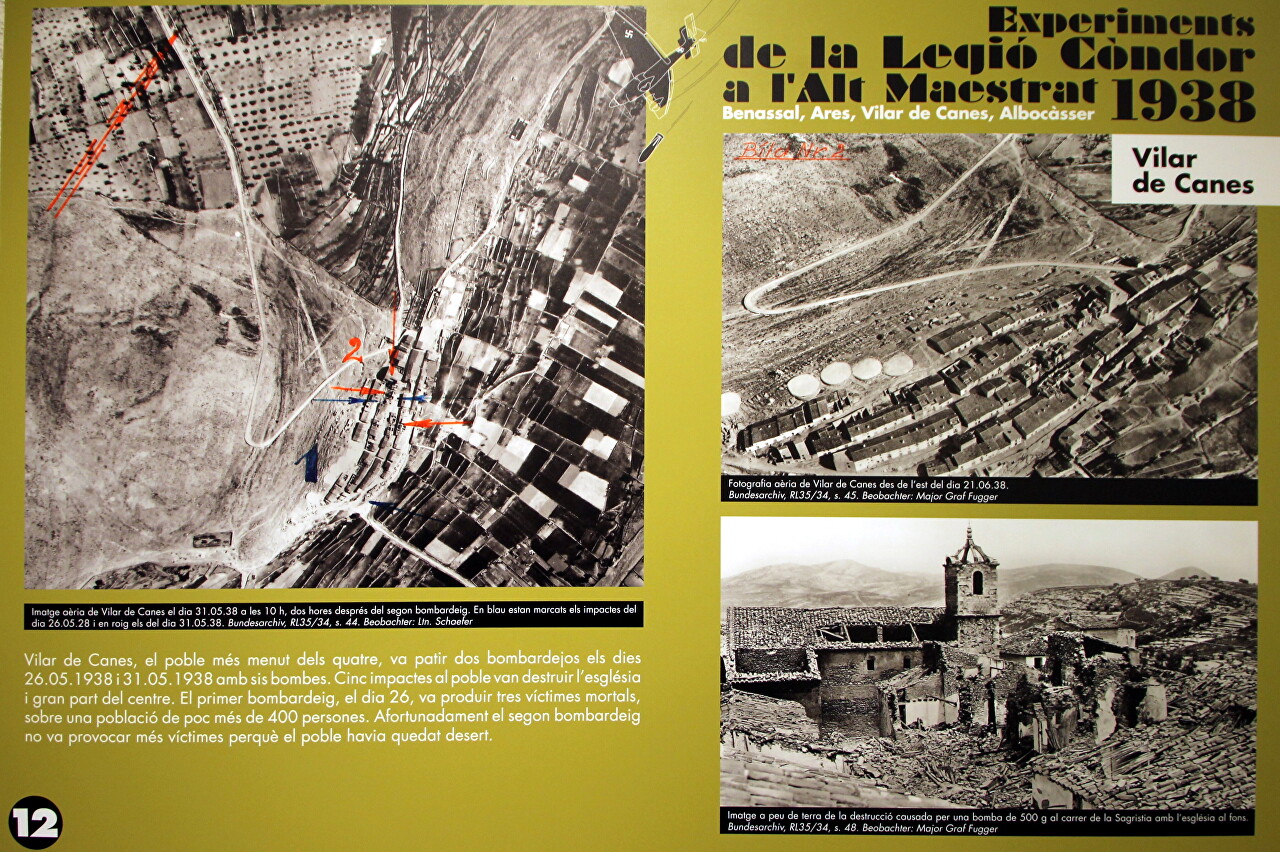 In Albocàsser from 21 to 24 may was dropped 12 bombs weighing half a ton. 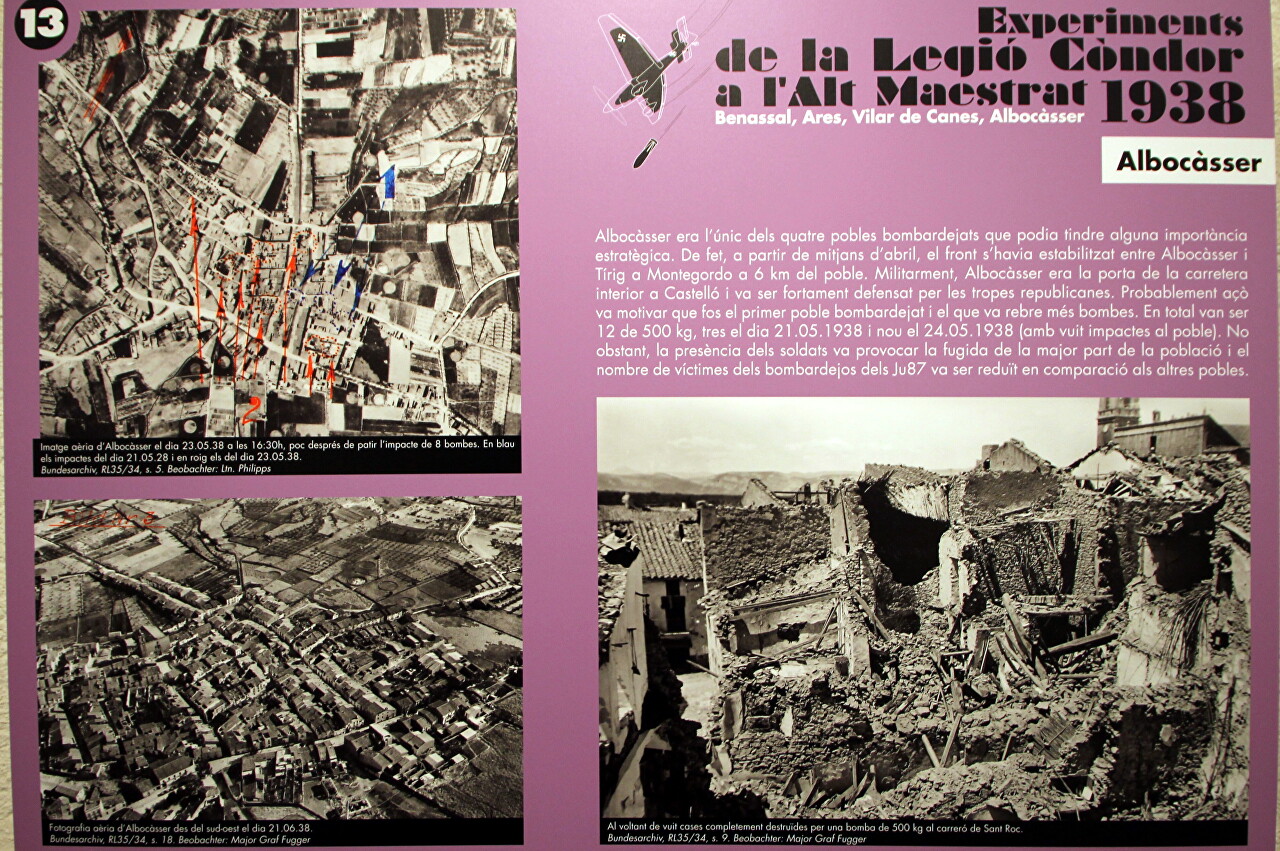 To be honest, the incredible strength of Spanish houses is striking - buildings were completely destroyed only in the epicenter of the explosions. Also impressive is the accuracy of bombing - according to German reports, the pilots fell into a circle with a radius of 5 meters. 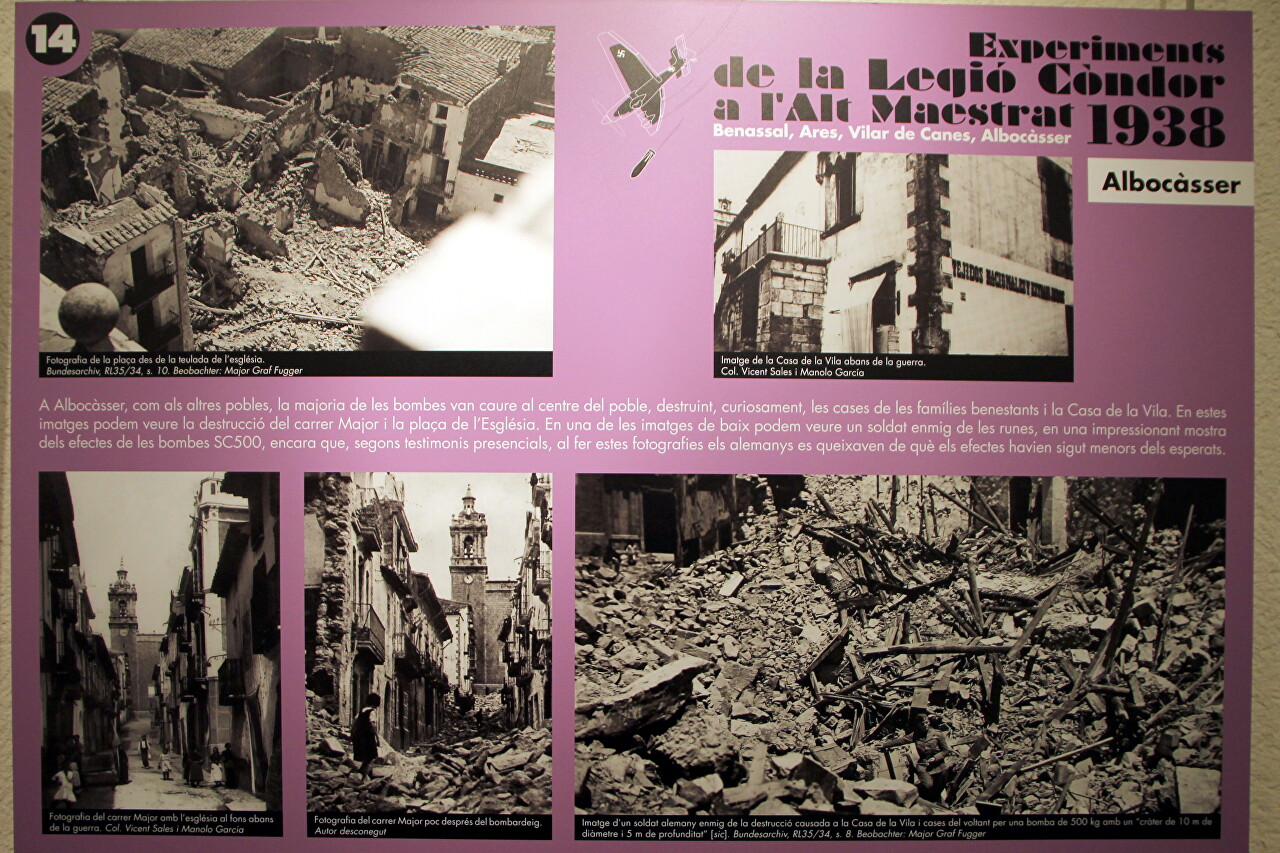 Lists of civilians killed in the bombing. 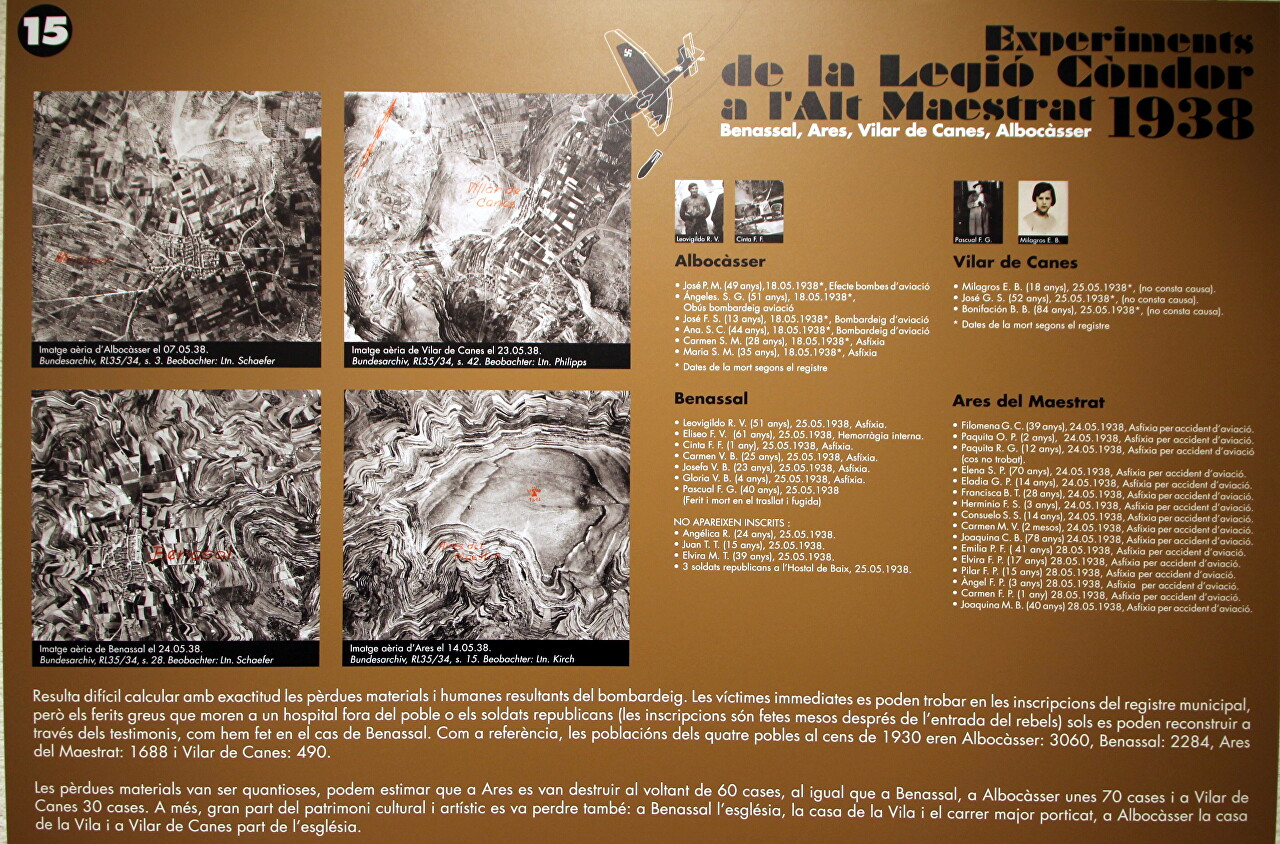 Aerial photos of villages taken 75 years after the bombing. The tracks are still visible. Carles Salvador's poem El Benassal Antic, written in 1945 in memory of those killed in the bombing. 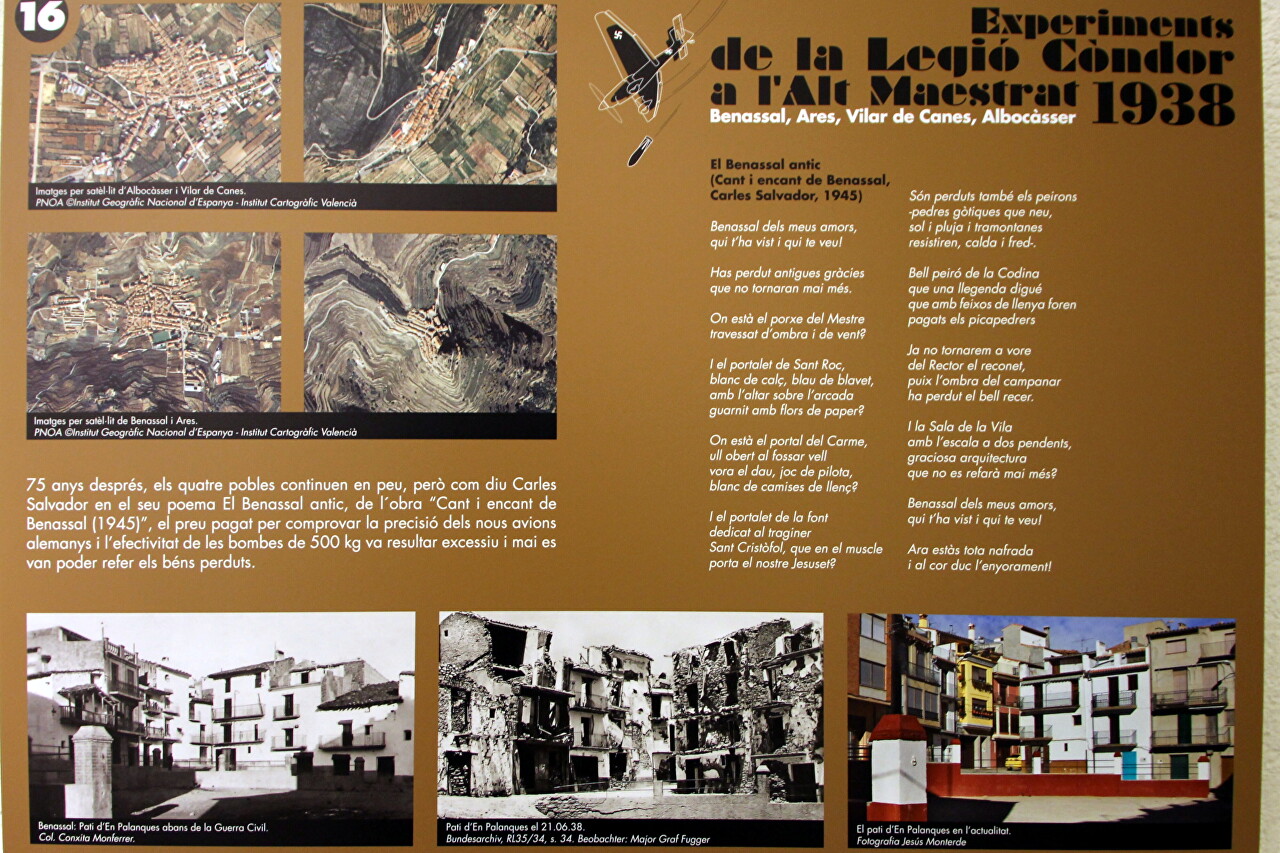