Loss of Baggage During the flight. What to Do?

After arriving in Lisbon and passing through passport control, I went to the baggage claim area. However, my backpack didn't show up on the conveyor belt. However, I was already mentally prepared for this - the transfer time in Istanbul was catastrophically reduced due to the delay of the flight from Yekaterinburg - the luggage simply did not have time to be reloaded. The only consolation was that there were about five people like me on our flight. After waiting until the tape was completely empty, we went to the Lost and Found service without any emotions - there are offices of such services in the baggage hall of each airport. In Lisbon's Portela, this is a small room behind a glass partition, where two employees sat, and there were shelves with found things waiting for their owners. There were about ten people in the office, not only from our flight - the airport is big, and luggage losses, with all the perfection of technical means of processing it, still happen. The employees knew their job, no one stayed too long with them, and after about 15 minutes I sat down with a nice girl who got down to business without any questions. Most often, baggage is lost at transit airports - either they don't have time to process it, or the baggage tag is lost during processing. The first option is the easiest to resolve - usually the luggage arrives at the destination on the next flight. The second one is more complicated, since it is impossible to determine the owner, so lost-found employees suggest filling out a form with a description of the appearance and content of the loss. Well, in Lisbon, I just handed over my passport and a baggage tag that is attached to the boarding pass at check-in. It is very important to keep this tag - its absence greatly complicates the search.. Then the girl asked about the type, size, weight and color of my bag, then gave me a table with all sorts of suitcases, bags, backpacks and asked me to indicate the most similar to my backpack. Then I wrote my home address, home phone number, and phone number in Portugal on the form, and immediately called back to this number for verification. Finally, I typed in the address of my hotel from my booking reservation, specifying how many days I would be staying there. Tapping on the keys, the girl confidently informed me that my things would be delivered to the hotel tomorrow, I think, she established the location of my backpack and the possibility of its delivery. After all these simple manipulations, apologies were made for the inconvenience received and I was handed a cosmetic bag from Turkish-Airlines with hygiene products, a T - shirt and a pair of socks were also included in the kit.I must say that when I was waiting for my turn, I was panicking about what I would say-all the foreign words just flew out of my head. However, the communication turned out to be completely relaxed and even with jokes. When I left lost-found, I realized that I spoke babel porridge - mostly in English, but I called the numbers in Spanish, and Italian words also skipped by, but this did not cause any misunderstandings.
After checking into the hotel, the first thing I did was check the availability of WiFi, and I went to the Internet to ask what people write about the loss of luggage by airlines. It turned out that you can track your loss on a special service - World-tracker.aero. In the form, enter your loss code and last name, which are indicated on the search list issued by the lost-found service. After entering my details, I found out that my backpack is located in Istanbul. All that remains is to wait for him to arrive on the flight tomorrow. Looking ahead, the backpack was delivered in the evening of the next day, without any bureaucracy...they just left it at the reception, having previously specified whether so-and-so lives with them. 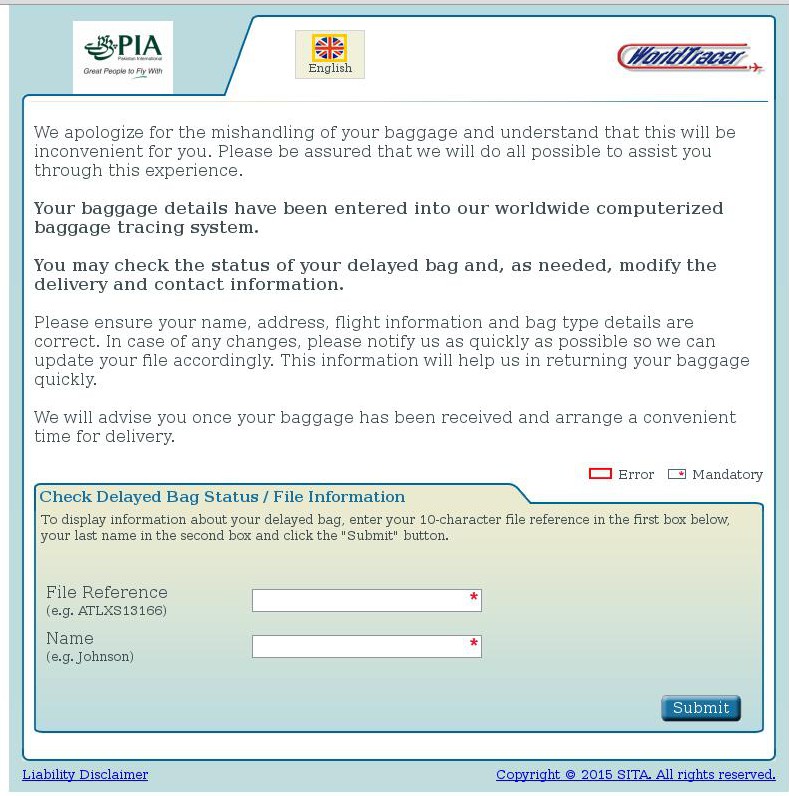 Looking even further, I will tell you that on the way back, history repeated itself - the backpack was again stuck in Istanbul, but finding it was no longer so easy. A few words about the work of the loss service at the Koltsovo airport in Yekaterinburg. First, it turned out to be a window in a blank wall with a narrow counter. where several people fill out papers at the same time. Secondly, it was immediately said that you are not in Europe here, and no one will take your luggage home with you - wait for the call and pick it up. Third, after the lost-found, you must visit customs, and a special receipt is taken for this purpose. At customs, it is required to fill in 2 copies of the declaration for not received (!!!) luggage, otherwise, when receiving the find, it will be subject to a duty of 9 rubles per kilogram. How the baggage found differs from that received immediately upon arrival is a great mystery. Another small touch - one of the "losers" did not know a word of Russian, and other sufferers helped him to explain himself to the staff - at the international airport, English is somehow too bad...The next flight from Istanbul was only 2 days later, with my backpack and arrived in Yekaterinburg, as I was informed by phone. When I came to pick up my backpack, I had to fill out the receipt paper again and write the customs declaration again - I was told to rewrite letter by letter what was in the first two copies. After that, I had a question - what date should I set? This put the customs officers in a dead end, and they began to find out on the phone. It turned out that the date should be put the same as on the first two papers! In this operation, 3 people were involved in B with stars not lower than the captain. To be fair, all the participants were wonderfully polite and helpful.