It is more convenient to get from Messina to Taormina by bus, as the bus station is located almost in the city center, at an altitude of 200 meters above sea level, while the railway station is located almost at the water and you need to get from there to the city by bus. Last night, on my way home, I stopped at the bus station, where I found out that the first bus to Taormina leaves at 11: 40 and runs for almost two hours. I didn't want to lose half a day, so I couldn't think of anything better to do than take the hourly train. 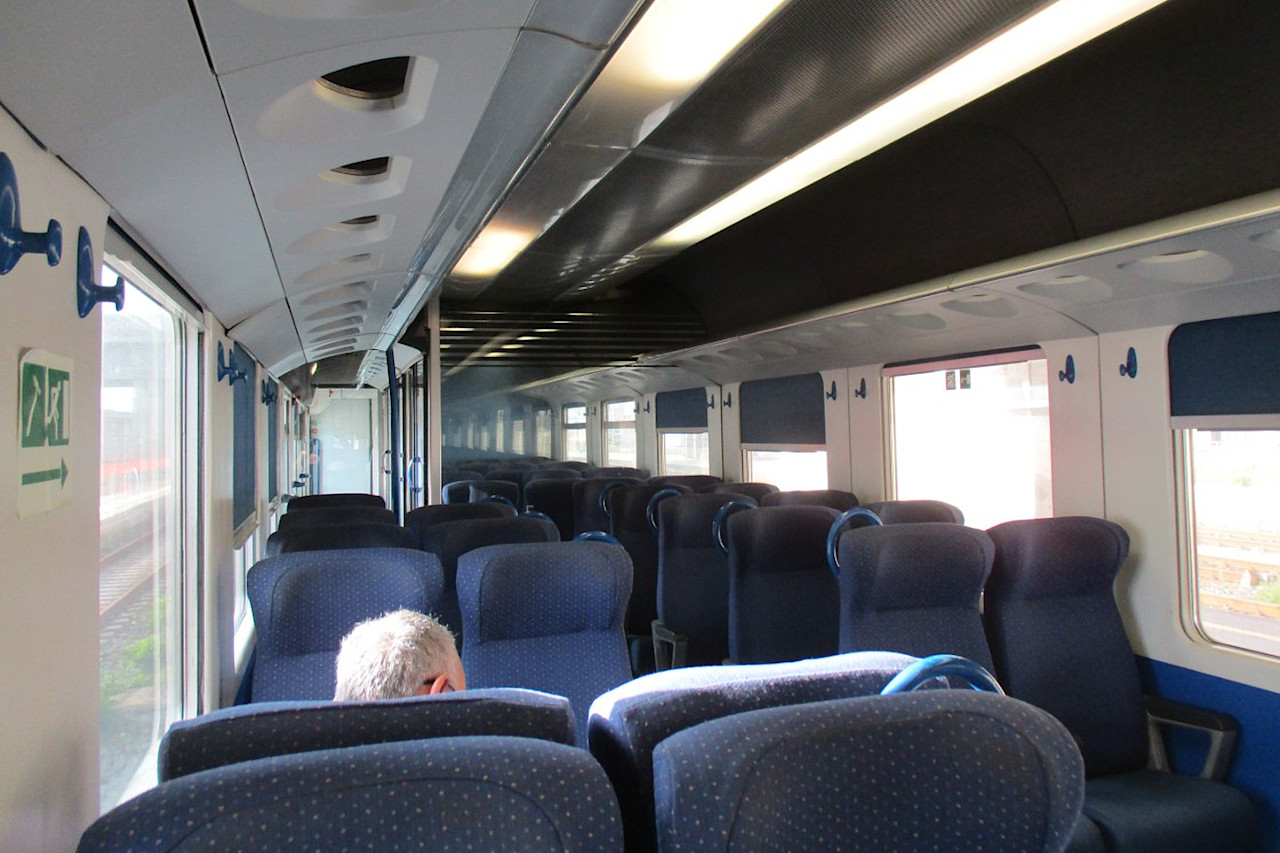 After leaving Messina at 10: 10, I got off the train about 40 minutes later at the Stazione di Taormina-Giardini station. The opportunity to get acquainted with this object, seen more than once in Fellini's films and just before leaving in Luc Besson's "The Big Blue", also played an important role in the choice of transport. Taormina-Giardini railway station is located almost halfway between Messina and Catania, on a single-track stretch of road that follows the curves of the coastline and is teeming with stunning views. The double name is due to the fact that the station serves two localities - Taormina and the coastal town of Giardini Naxos. The station was built as part of the construction of a railway connecting the port of Messina in the far north of the island with agricultural areas on the eastern coast of the Ionian Sea. The location of the station was chosen one kilometer from the village of Giardini, below the city of Taormina, in the space between two tunnels. Initially, the station was a modest wooden house and a shed for storing luggage. The first train from Mesina arrived at the station on December 12, 1866, and on January 3, 1967, traffic to Catania was opened. The line was built and operated by Società Vittorio Emanuele, then by the Italian Southern Railway Society, in 1885 the Sicilian Railway Company became the owner, and finally, in 1905, all the railways were merged into one state-owned company. In the twenties of the last century, the state railways launched a large-scale infrastructure expansion program, which also affected the Taormina-Giardini station. 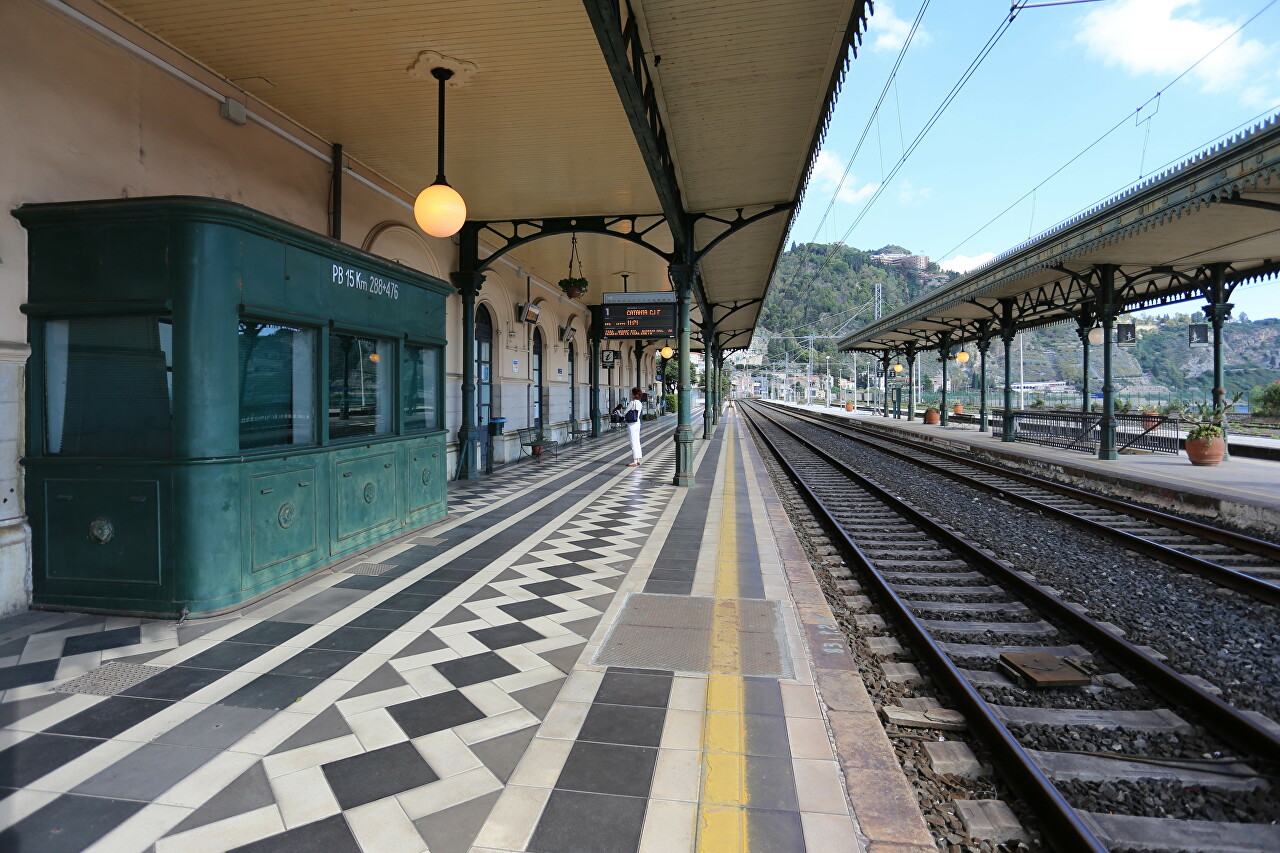 The design of the station building was commissioned by the architectural firm of Roberto Narducci. For the construction site, the Villagonia Castle, built in the 16th century and owned by the noble San Martino family, was expropriated and demolished. Before that, the castle was owned by the princes of Pardo and the dukes of Montalbano (are they the ancestors of the famous commissar from the cult TV series for Sicilians?). Together with the castle "under the bulldozer" went the chapel of the Madonna di Poroto Salvo. The new station building was built in two years and received passengers in 1928.
Taormina station is a wonderful two-story building in the Art Nouveau style( Art Nouveau, in Sicily this current was called Liberty Palermiano). The central part of the facade is framed by crenellated towers, stylized with the silhouette of the ruined Villageia castle, the main entrance is covered with a canopy of figured iron. The platforms are also protected from the sun and rain by metal awnings on cast-iron columns decorated with wrought-iron ornaments. 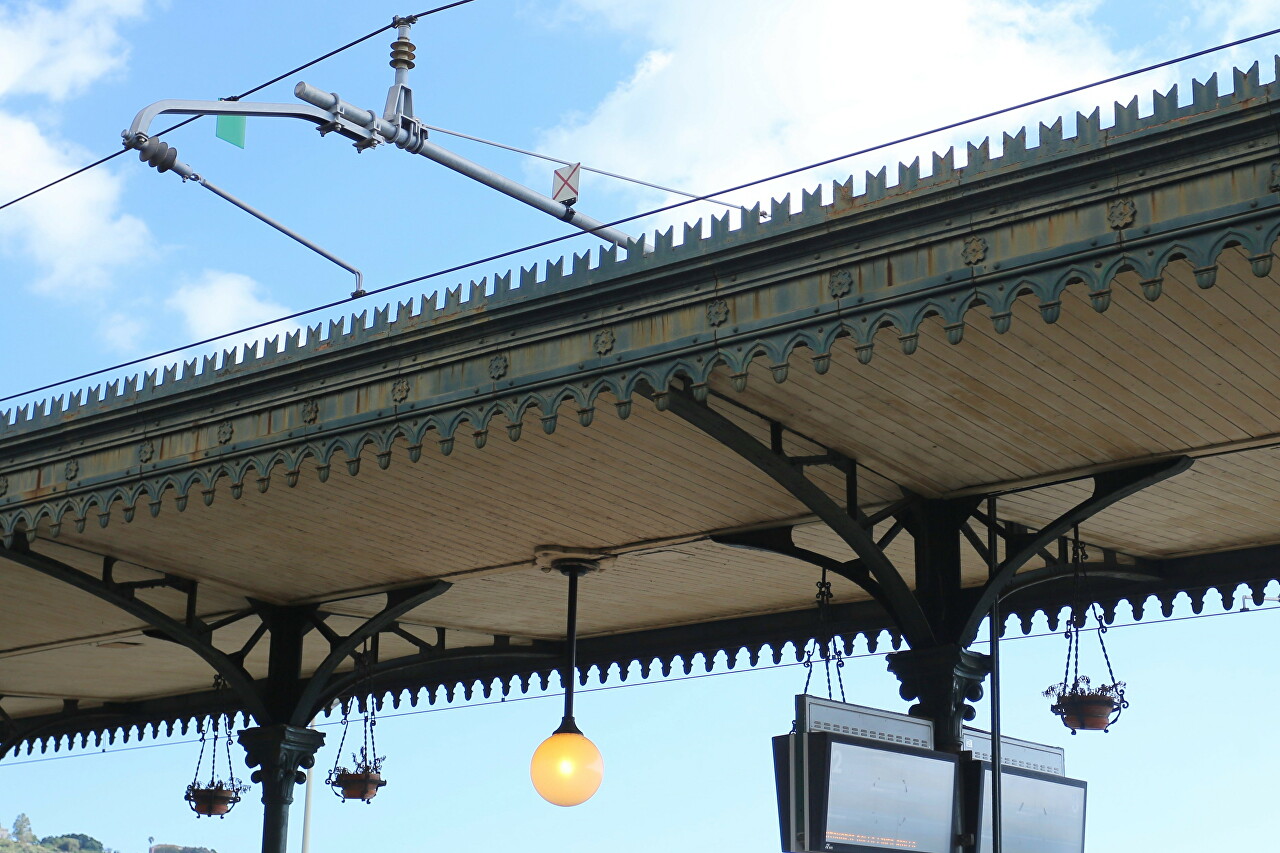 Arab-Norman motifs can be traced in the arched windows and doorways. 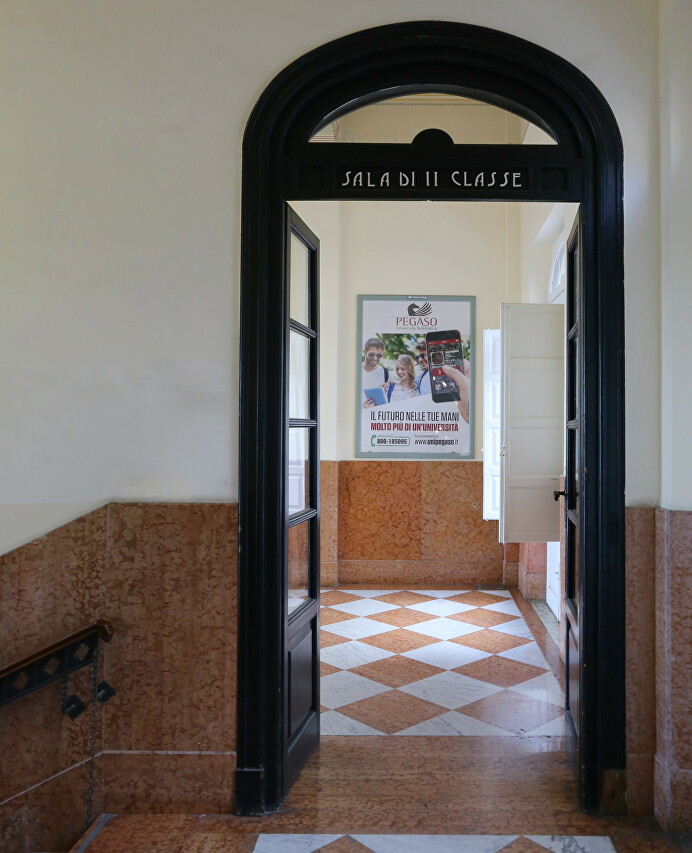 But the most interesting are the interiors of the station. 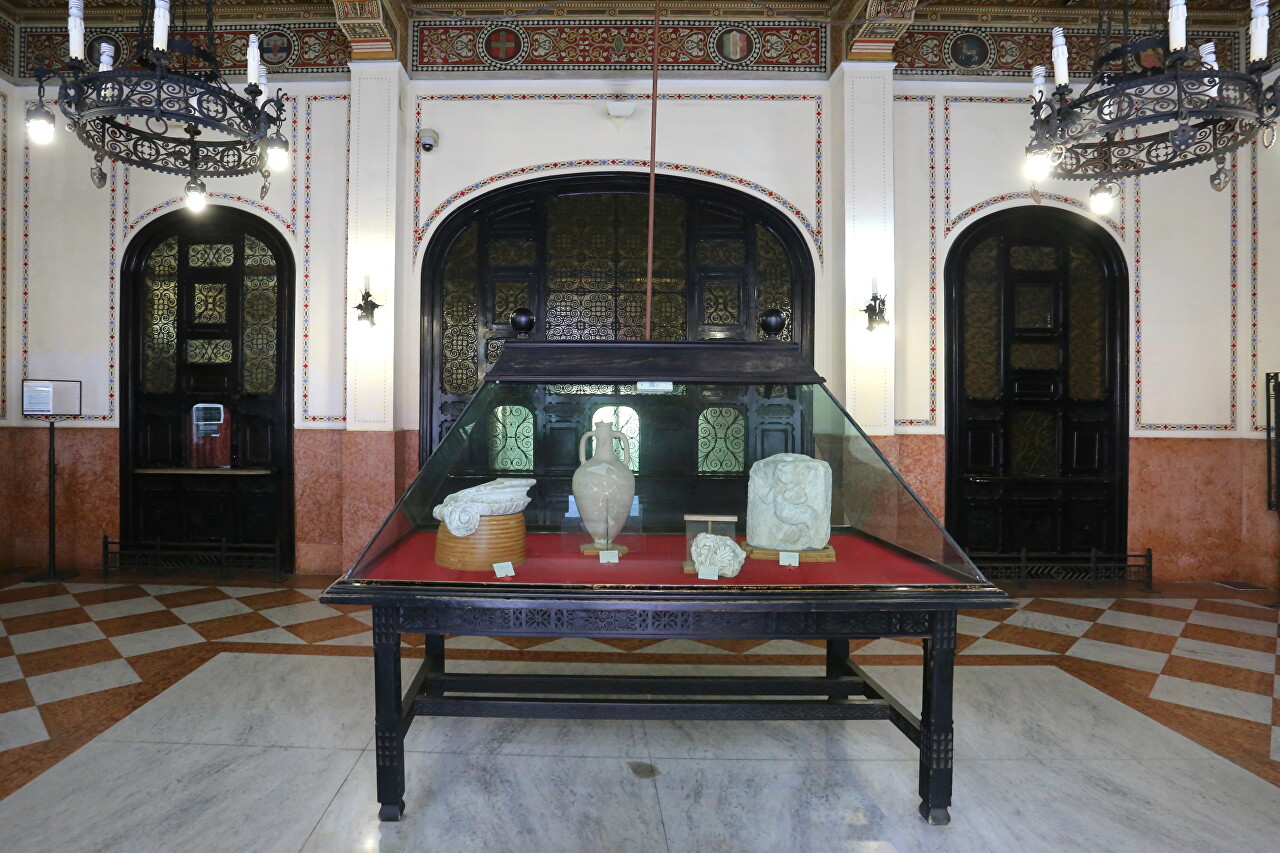 The walls and ceilings are decorated with frescoes and bas-reliefs by Palermo artist Salvatore Gregorietti (1870-1952). 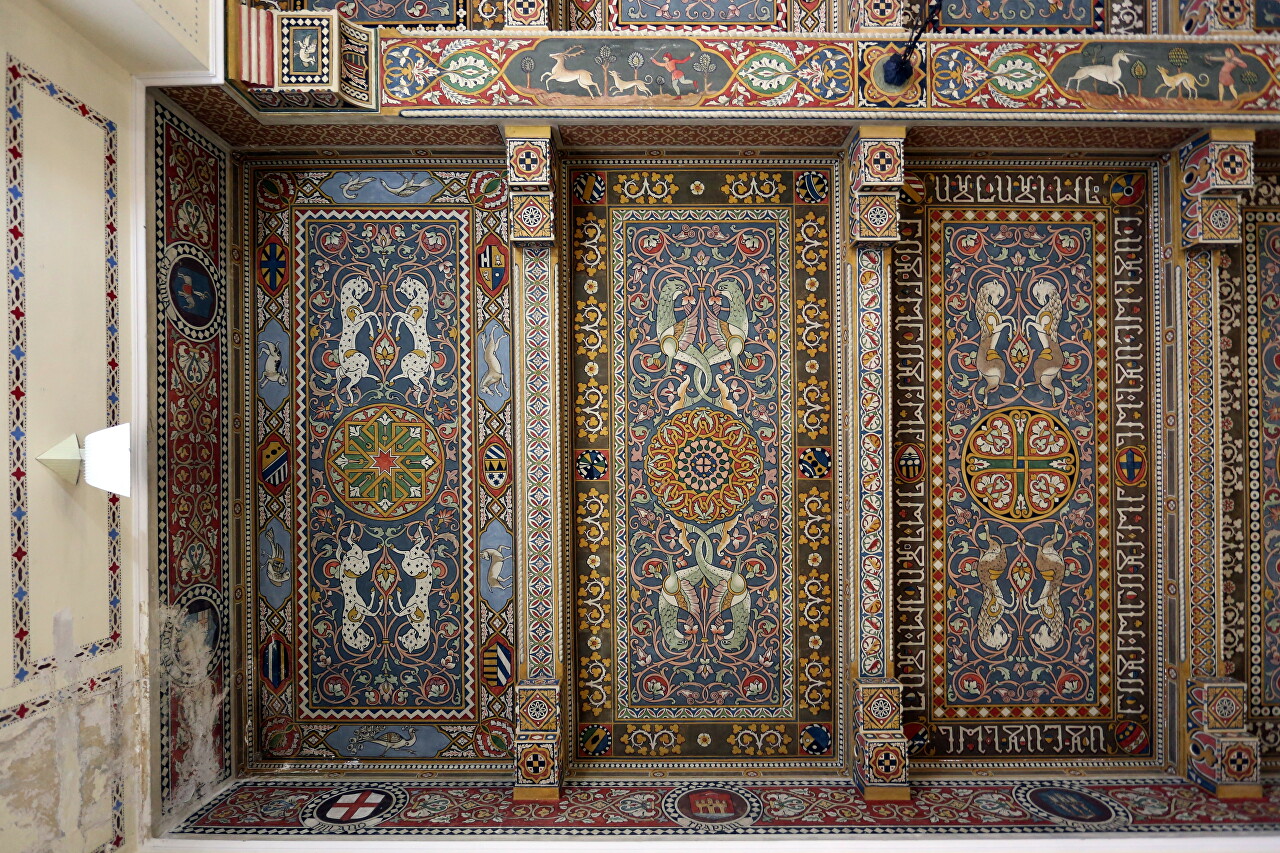 The paintings contain Arabic ornaments, and the images of elephants and tigers remind of Asia and the East. In other scenes, you can see deer, dogs, against the background of the forest, which refers to the European, Norman culture. 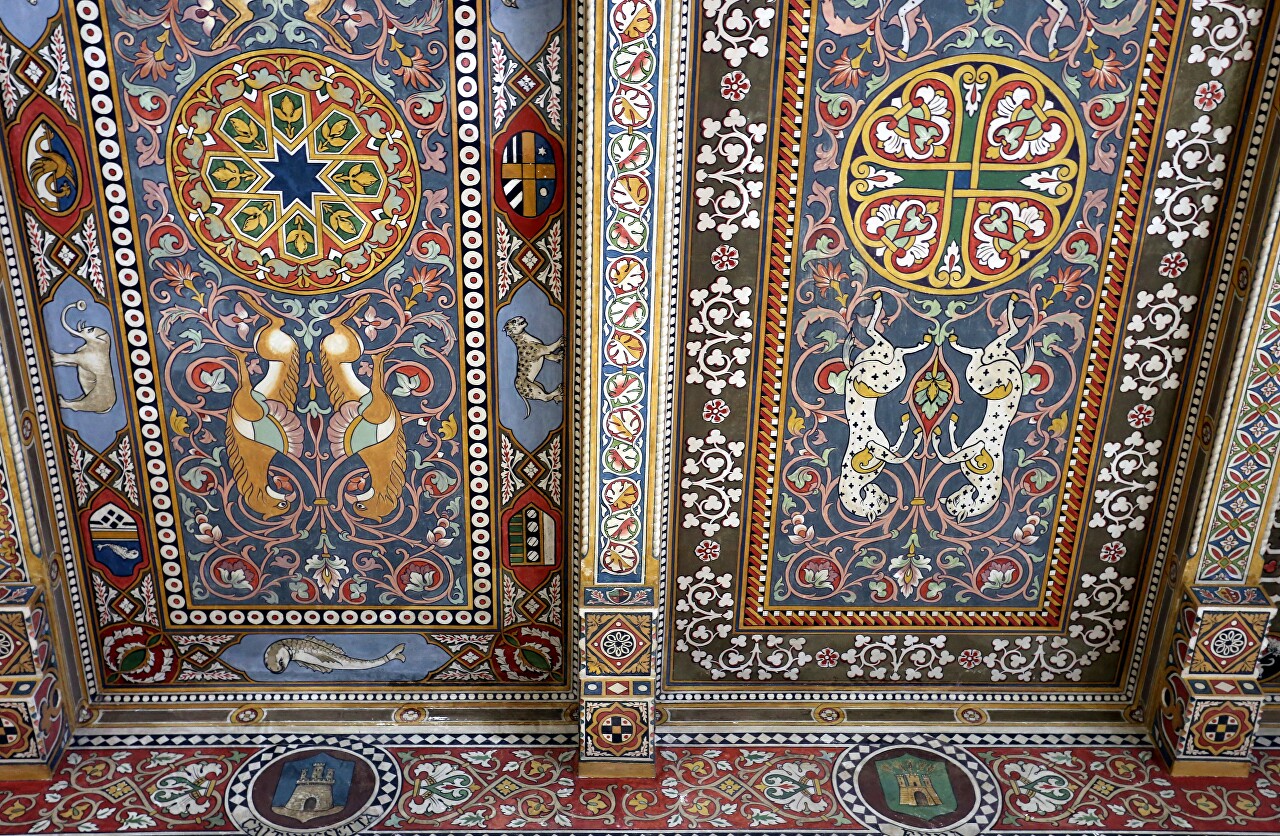 According to the sketches of the same Salvatore Gregorietti, forged elements were made - chandeliers and the canopies already mentioned. 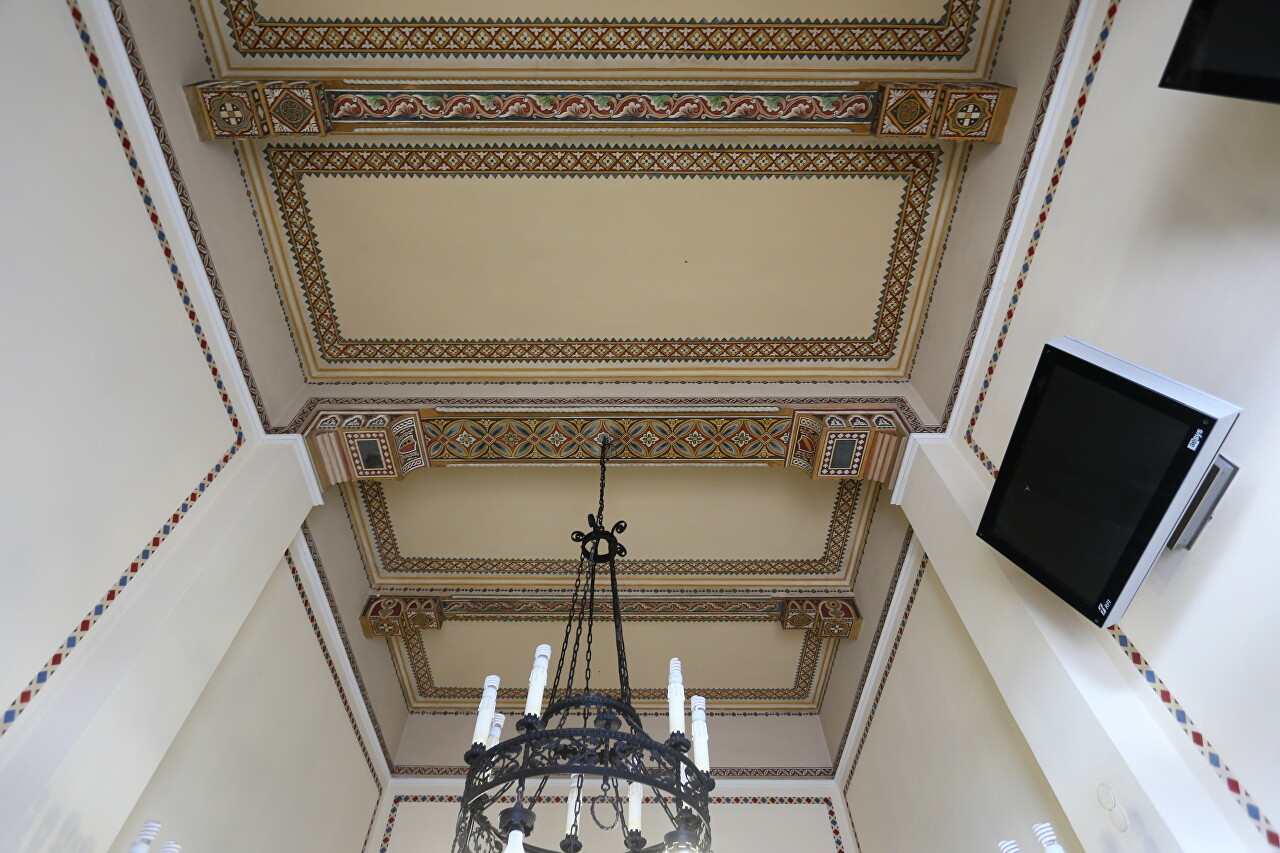 As well as stained glass windows on the ticket offices and dark wood furniture in the waiting rooms. 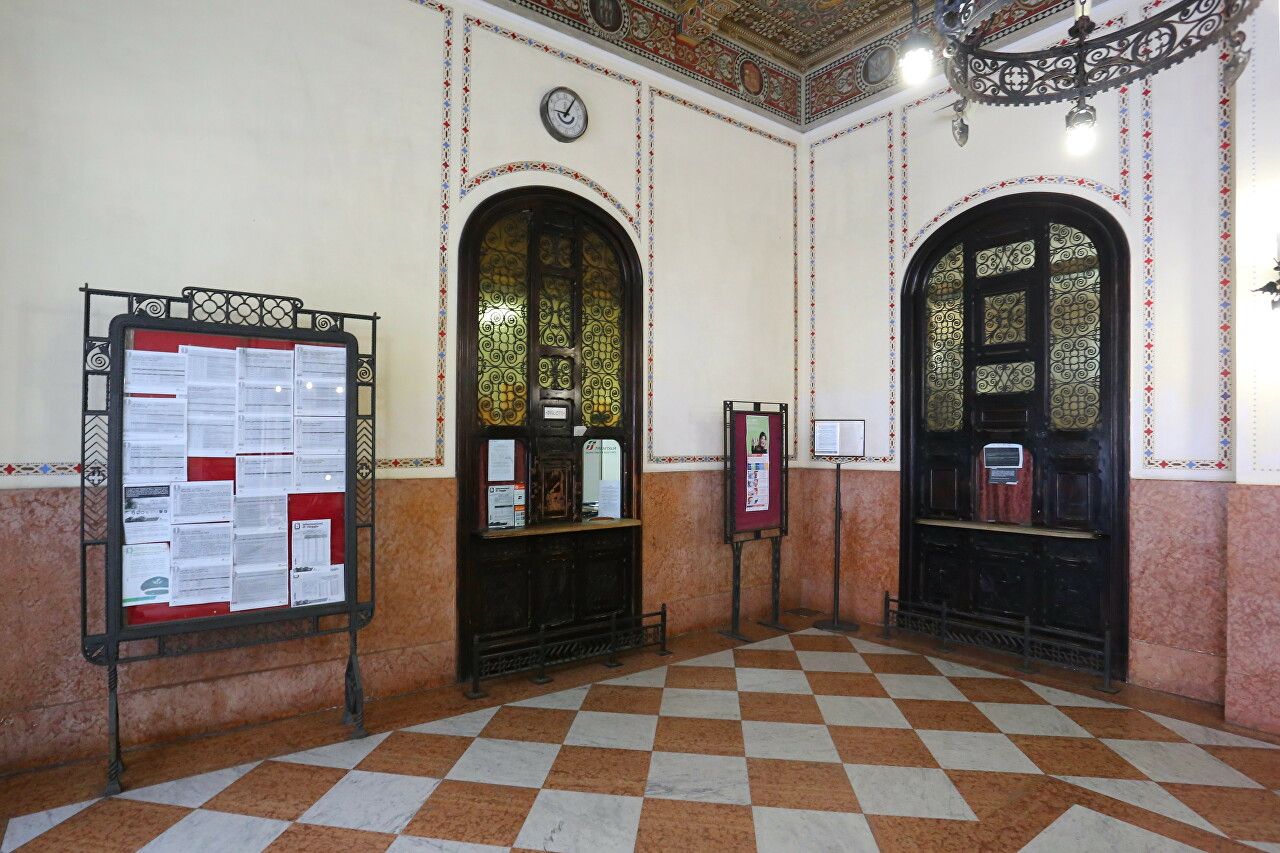 Now only the Sala di II Classe is available to the public, where there are modest seats, and the walls and ceiling are not spoiled with artistic excesses. I think the atmosphere should be richer for distinguished passengers. 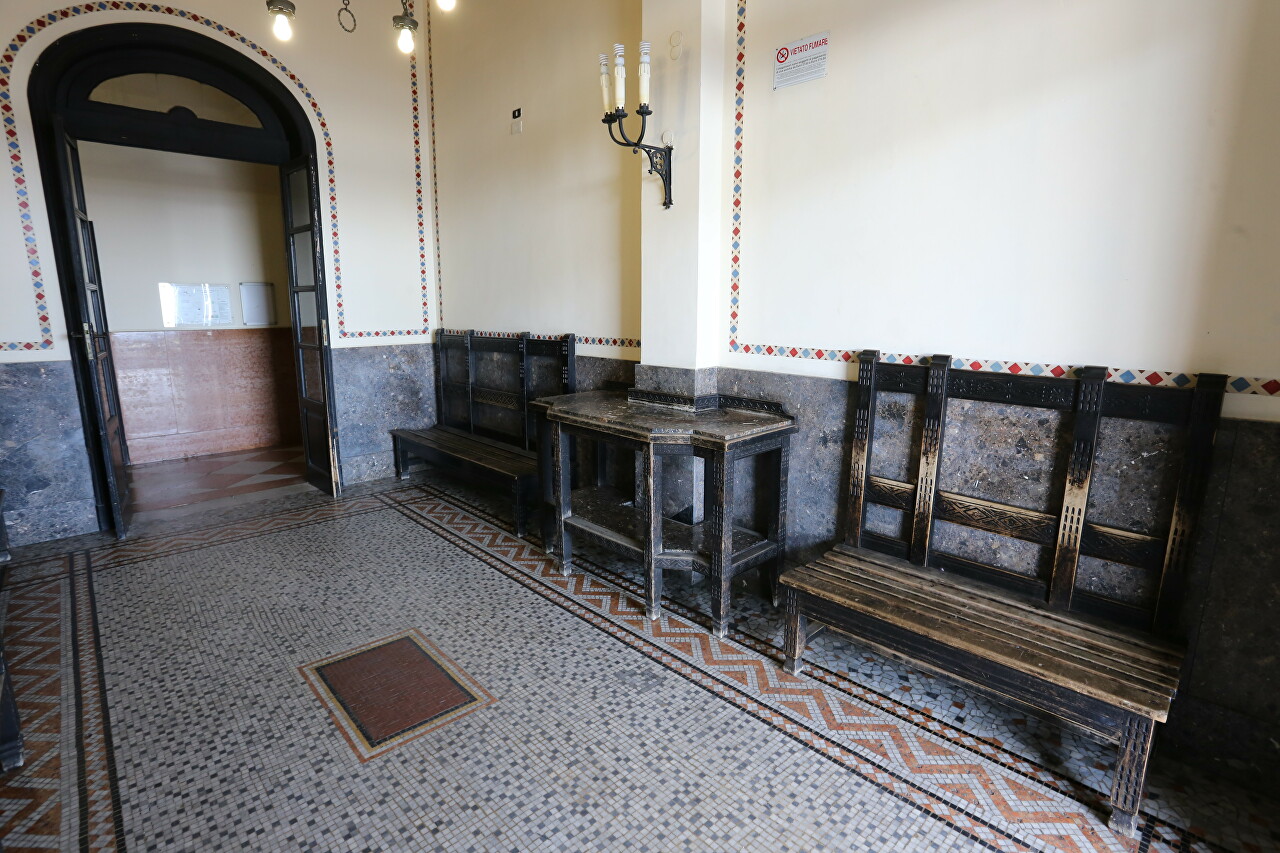 From 1959 to 1992, Taormina was also accessible via the Randazzo-Alcantara line, with a stop in the town of Trappitello, and there was a project to make this line double-track, to replace the old winding path along the coast. This would lead to the closure of the Taormina-Giardini station. But, fortunately, the opposite happened - the Ministry of Cultural Heritage stood up for the historical line, passengers can still enjoy wonderful views from the train windows, the Randazzo-Alcantara branch was closed. By the way, this abandoned branch is also of interest and deserves a visit. 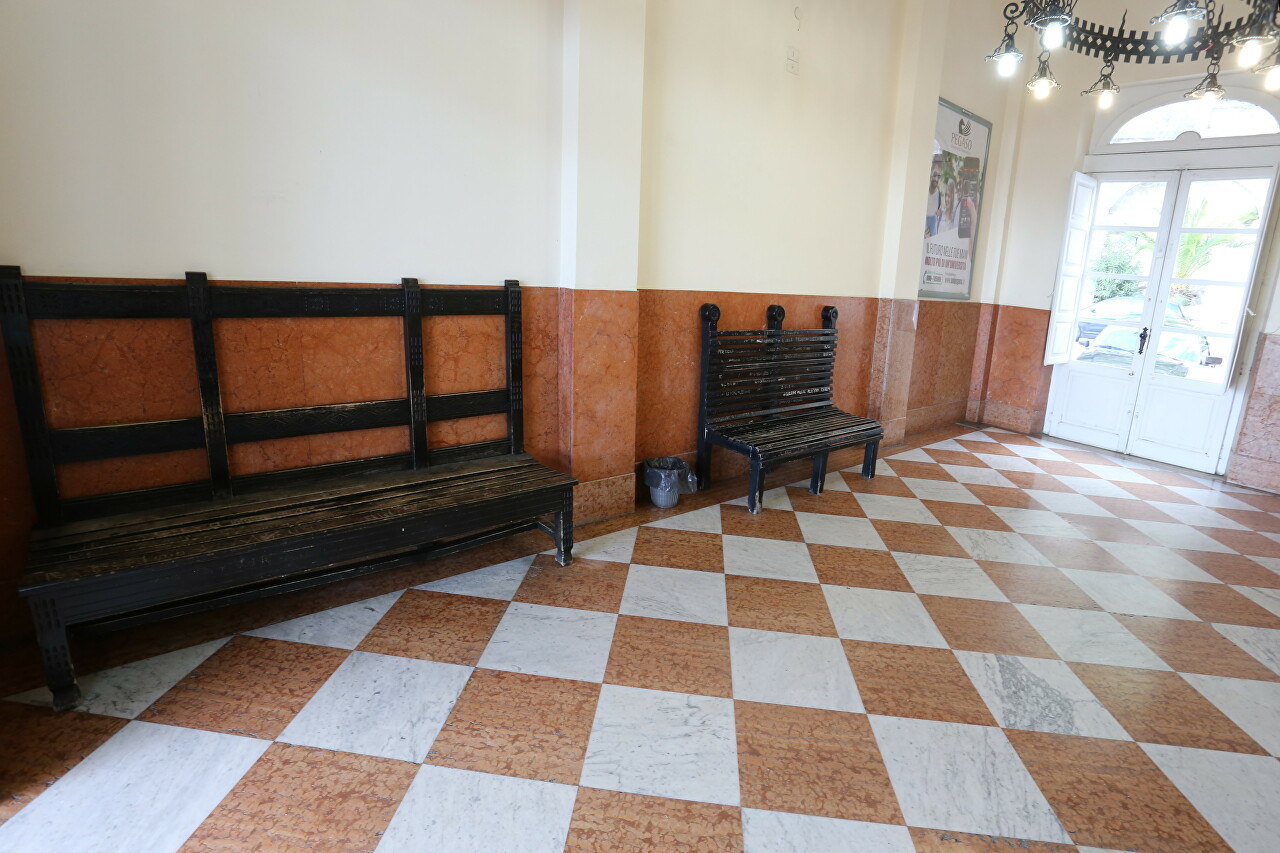