The "Holy Trinity" battleship, or completely in Spanish Nuestra Señora de la Santísima Trinidad, was launched in 1796 and remained the largest ship in the world until its demise. 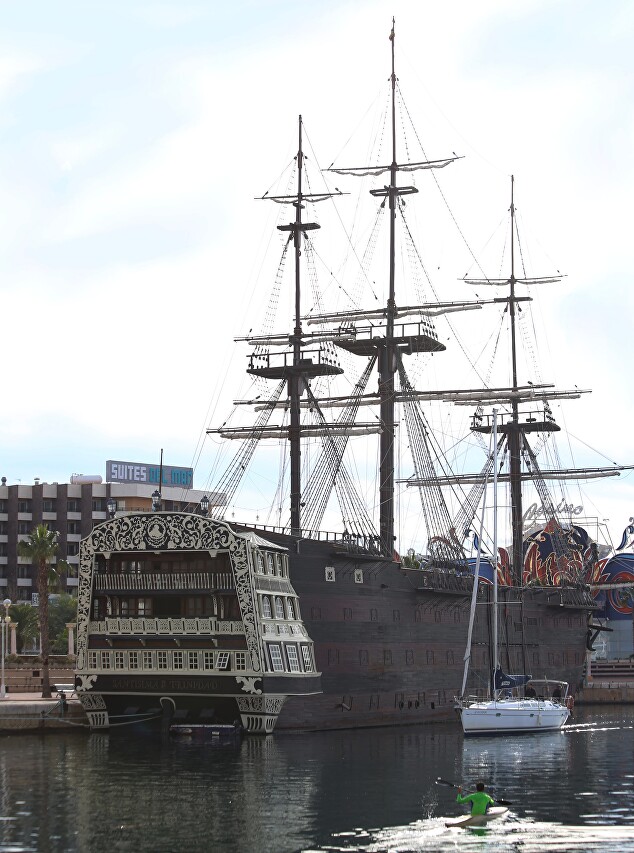 I will not tell you its history, there is a lot of information about it, I will only remind you that the ship participated in the battle of Trafalgar, surrendered to the British and sank while being towed to England. 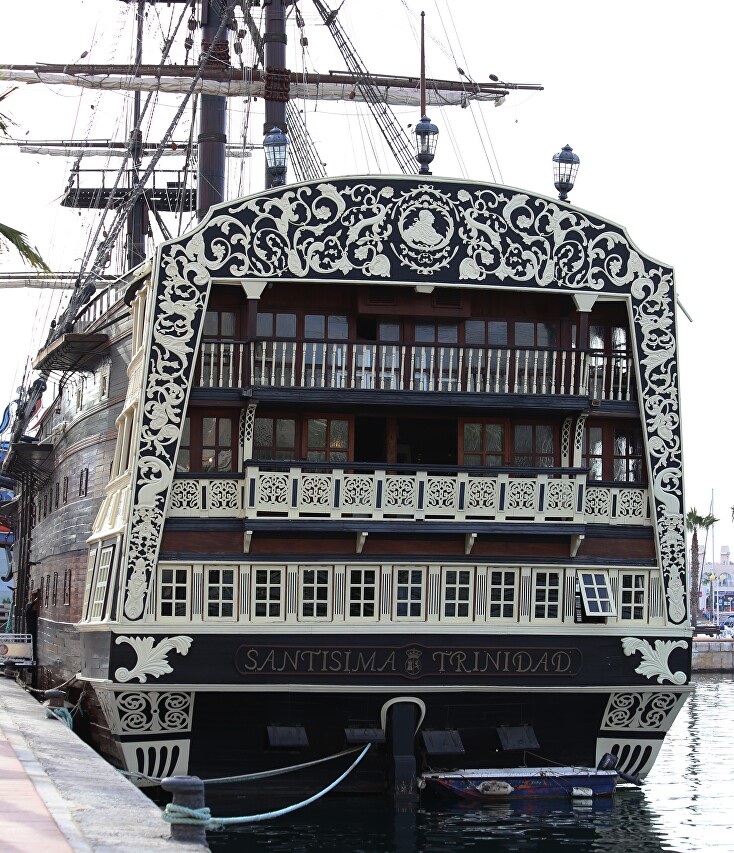 The sailboat in Alicante repeats the legendary ship only in appearance. Some places said to be "Santísima Trinidad" was built for filming, but there is no information about the films with the participation of this ship. 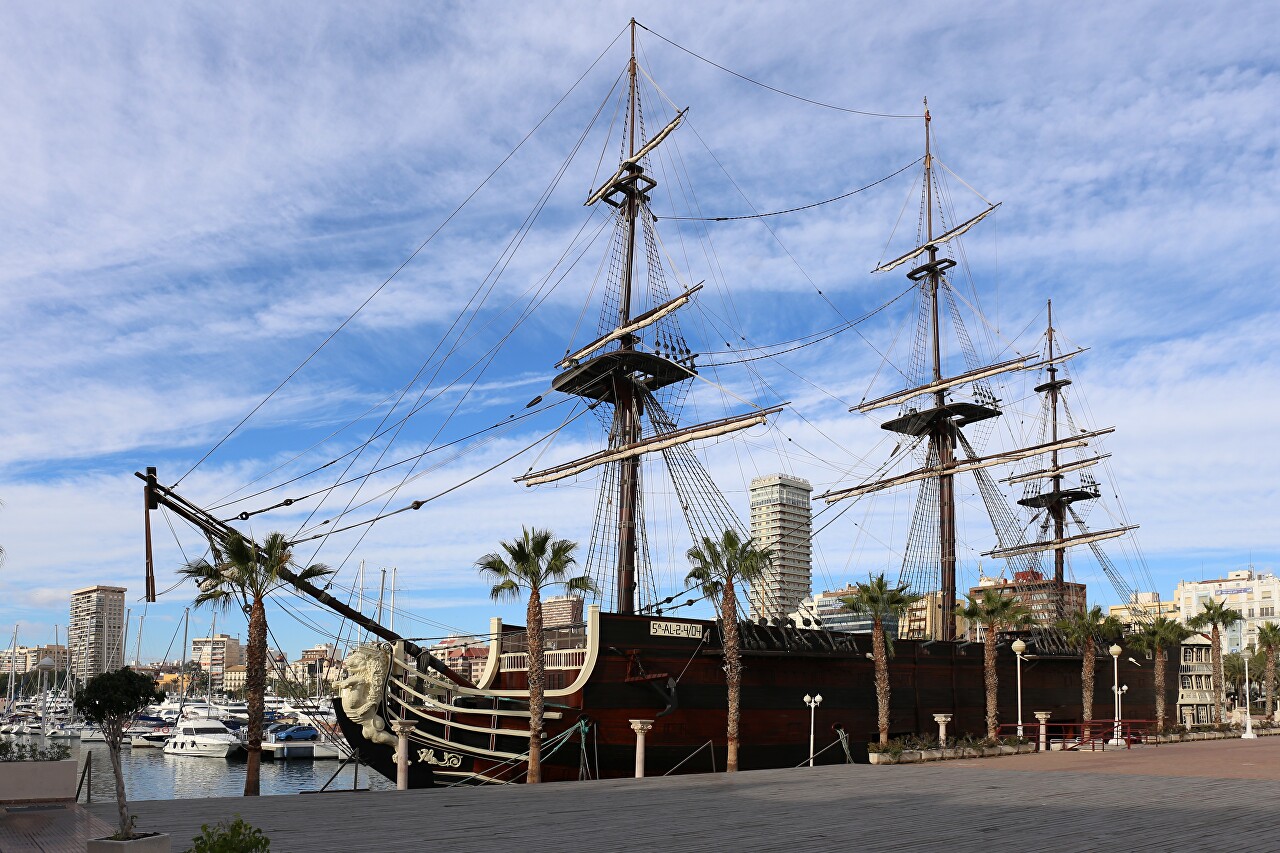 In fact, this floating structure was intended as an entertainment complex. In 2006, in Galicia, the old merchant ship received fake sides and deck, and masts were installed there. Then the ship was towed to Algeciras, where the fore and aft superstructures were built with appropriate design, rigging was installed, and the interior was equipped. 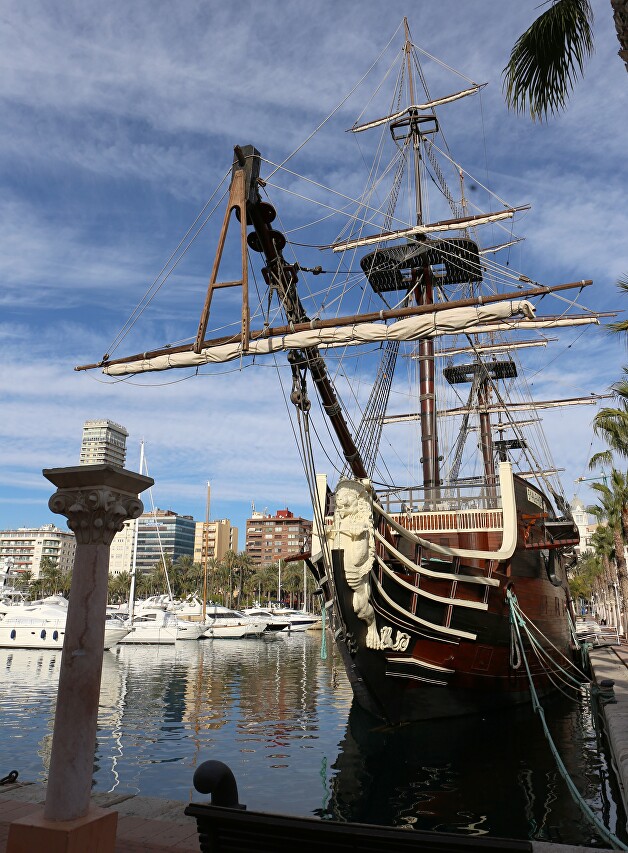 Some of the interior rooms repeat the interiors and equipment of a real ship, wax figures represent the members of its crew. Here you can see the battery deck with gunners, galley, officers ' and captain's cabins, and the mess hall. On Board there is a restaurant and several bars, a disco hall, an exhibition hall. Their interiors are decorated in the style of the 18th century. 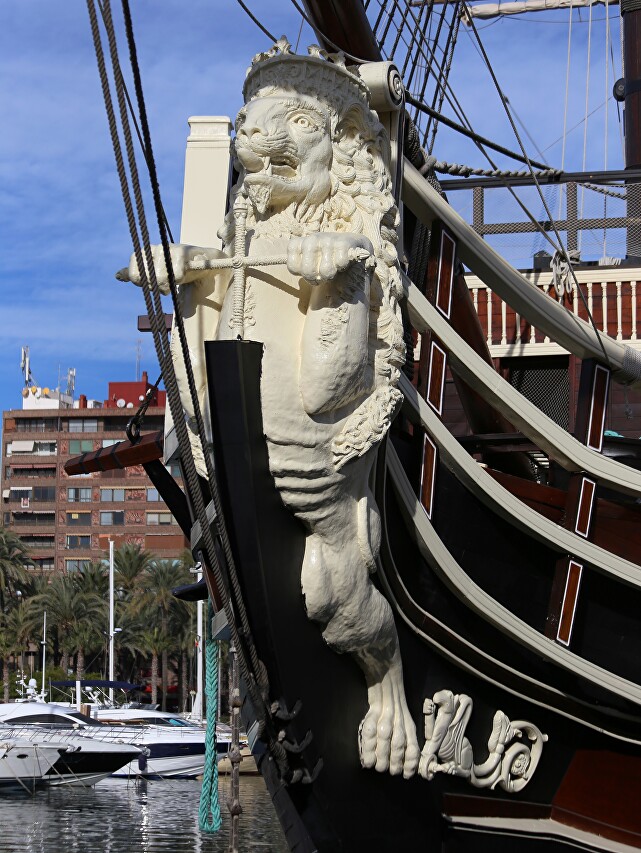 The floating mock-up of the warship was transported to Malaga, where it was used for its intended purpose until 2011. But the project turned out to be unprofitable - at first, the attendance was high, but the novelty and originality factor did not last long for the local public, and then the economic crisis undermined the tourist flow. 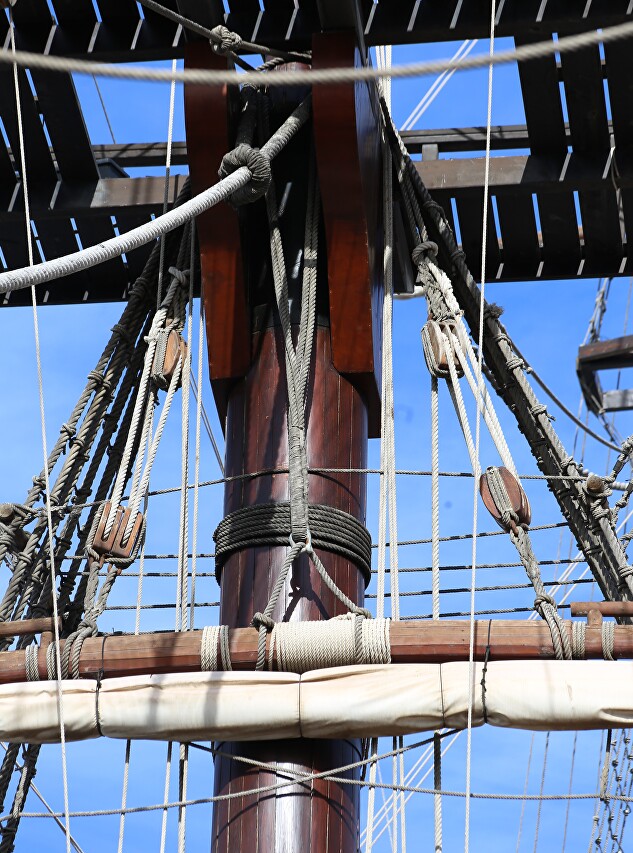 Therefore, it was decided to send a floating club to Ibiza,where there are no problems with the clientele of such institutions. Meanwhile, the owners moved him to Alicante for a couple of years, hoping for a temporary effect that unexpectedly exceeded all expectations. 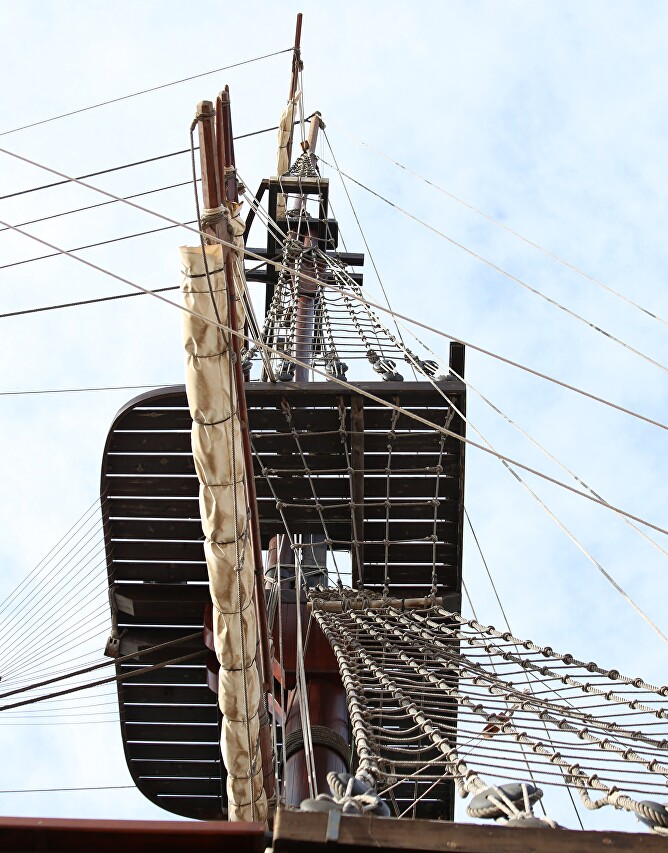 I took these pictures in January 2014, the sailboat was in the center, on the Paseo Puerto, next to the casino and the Meliá hotel. The entrance ticket cost 5 euros. Groups of 20 or more people were offered 45-minute guided tours, followed by another half-hour of wine tasting in one of the bars. 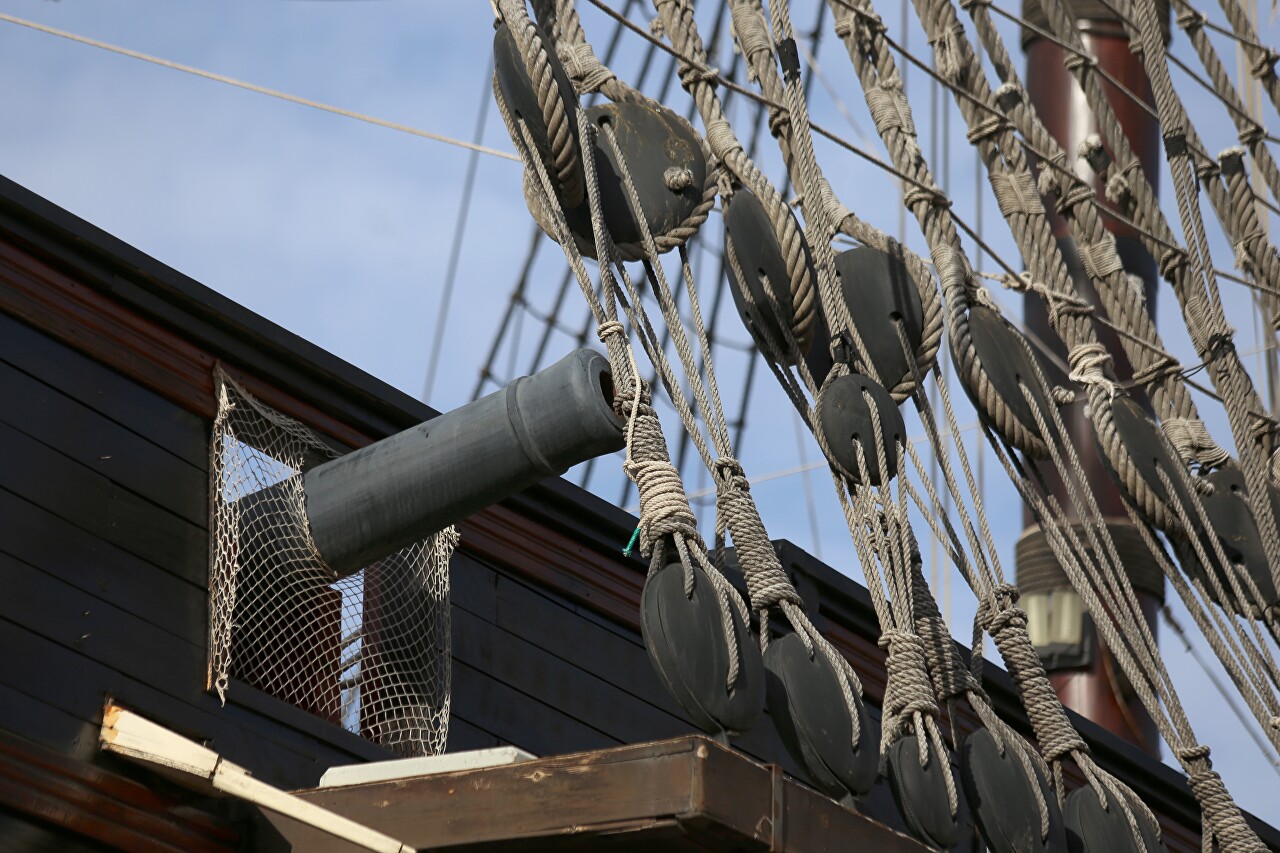 This winter (January 2018), I did not find the ship in its old place, but walking along the pier, I found it at one of the piers in the industrial part of the port. It turns out that in may 2017, it was removed from the center after numerous complaints from the owners of Meliá - the noise from the disco interfered with the guests. 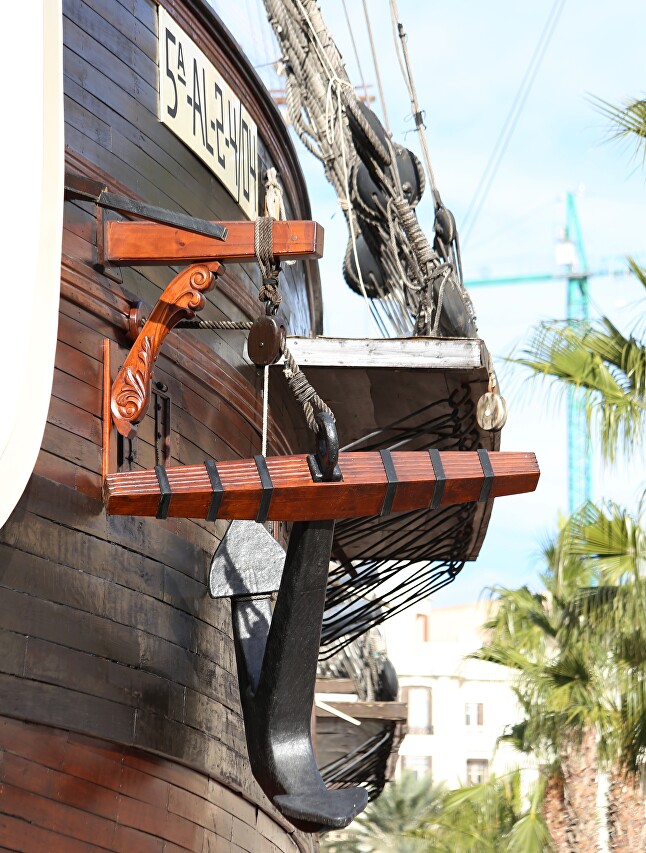 In addition, problems with the hull began, and the port's Supervisory authorities banned its use for public purposes. Despite complaints from hoteliers, the port agreed to extend the Parking lease, but on condition that the ship is repaired in dry dock. How the future fate of this certainly interesting object will develop is still unknown. I think he has a chance - now the Spanish coast is just bursting with tourists. 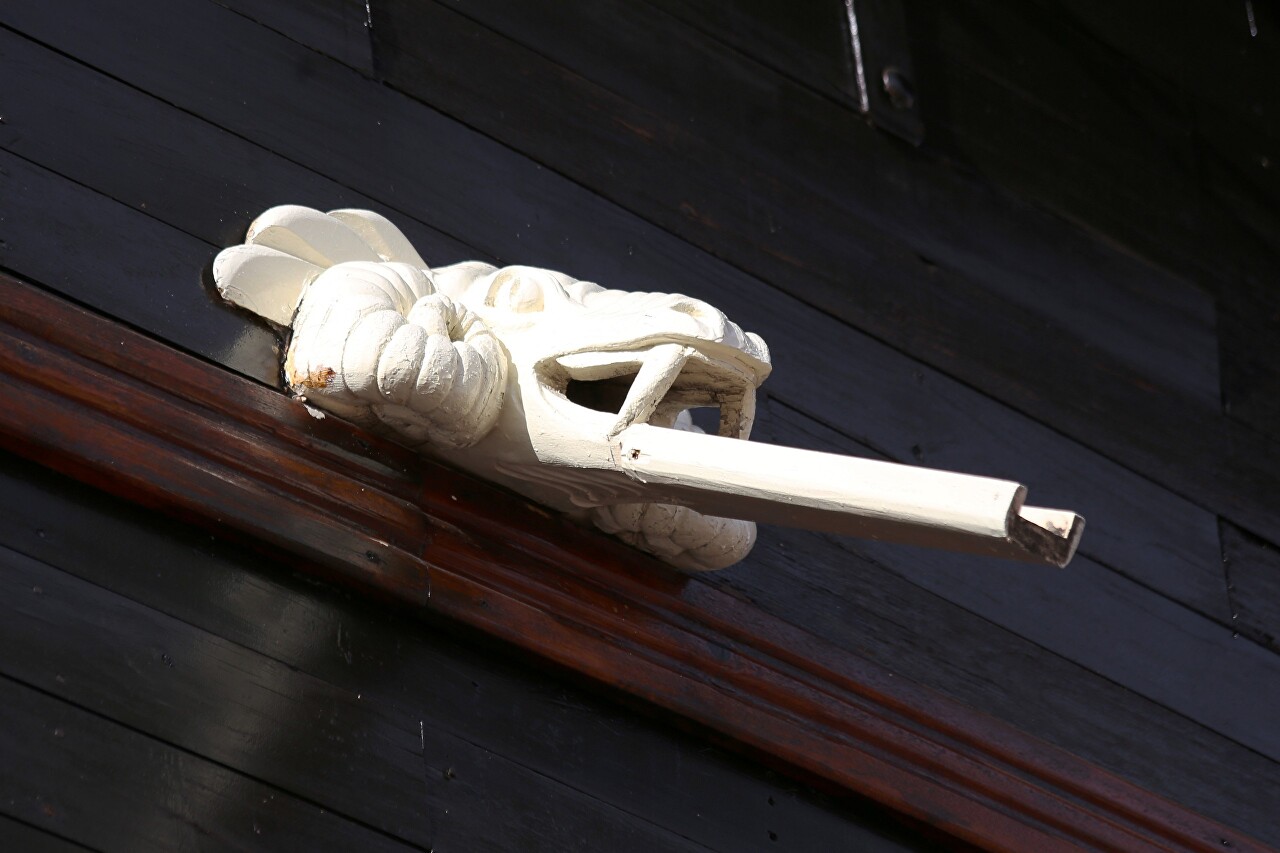