Near the village of El Chorro is the southern entrance to Caminito del Rey, but my ticket listed the northern entrance. A special shuttle bus goes there, its stop is next to the railway platform. 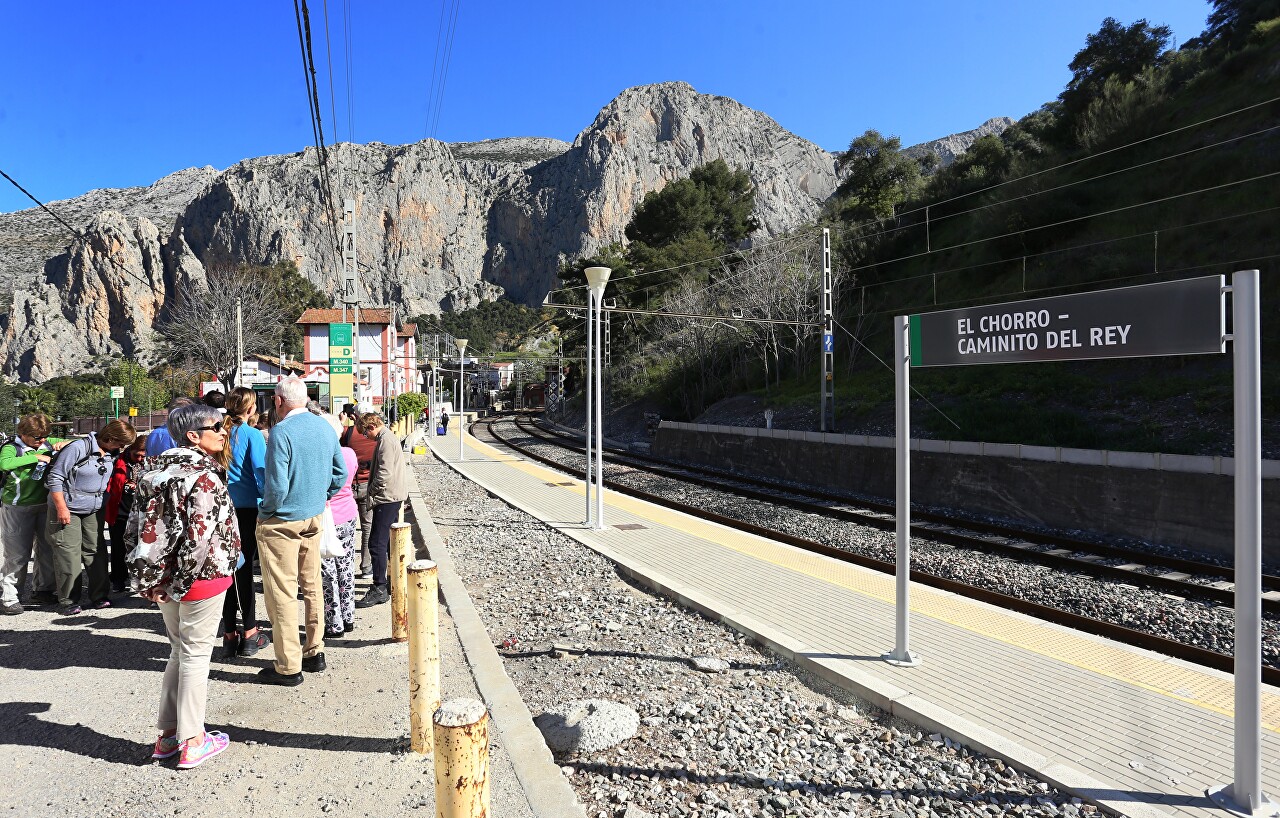 I paid for the bus fare when booking a visit to the Royal Trail online, which costs 1.5 euros. When boarding the bus, cut out the coupon from the booking printout. I don't know if it is possible to pay on the spot, I didn't see it, all the tourists were with printouts of the booking. Although, probably, it is possible to leave - two girls were traveling with me on the train, they did not have any armor at all, but they passed the path even a little before me. It was about 11 o'clock on the clock, and the time in my reservation was 13:30, so I was in no hurry to take the queue for boarding (and completely in vain - more on that later), since buses run every half hour. While I was standing near the bus stop and wondering where to go, a crowd of tourists who had arrived on the train with me boarded the bus, and the employee who was checking tickets turned her eyes to me, inviting me to come up to the salon as well. Well, if you are invited, you should go, especially since an exclusive seat was offered - a folding chair next to the driver. 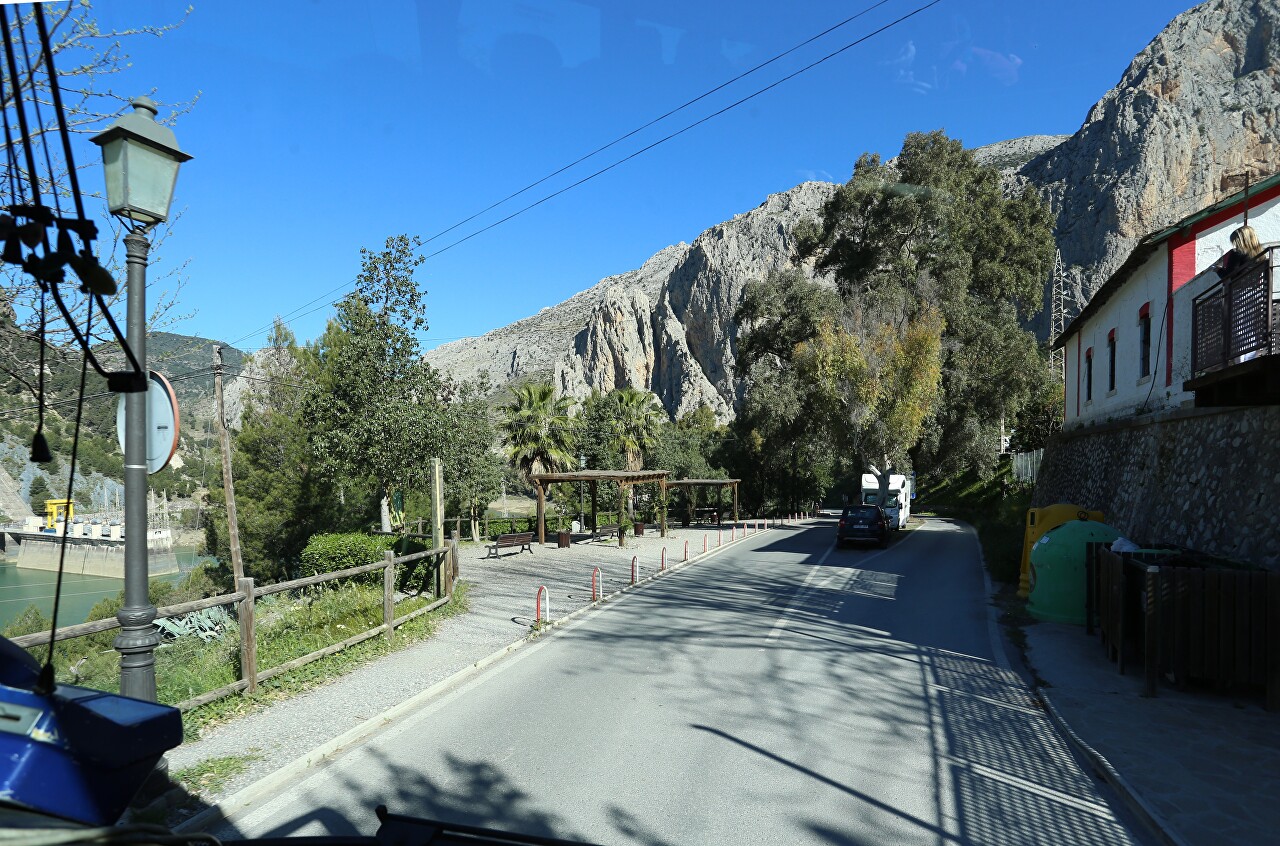 The dam forms the reservoir of the same name. 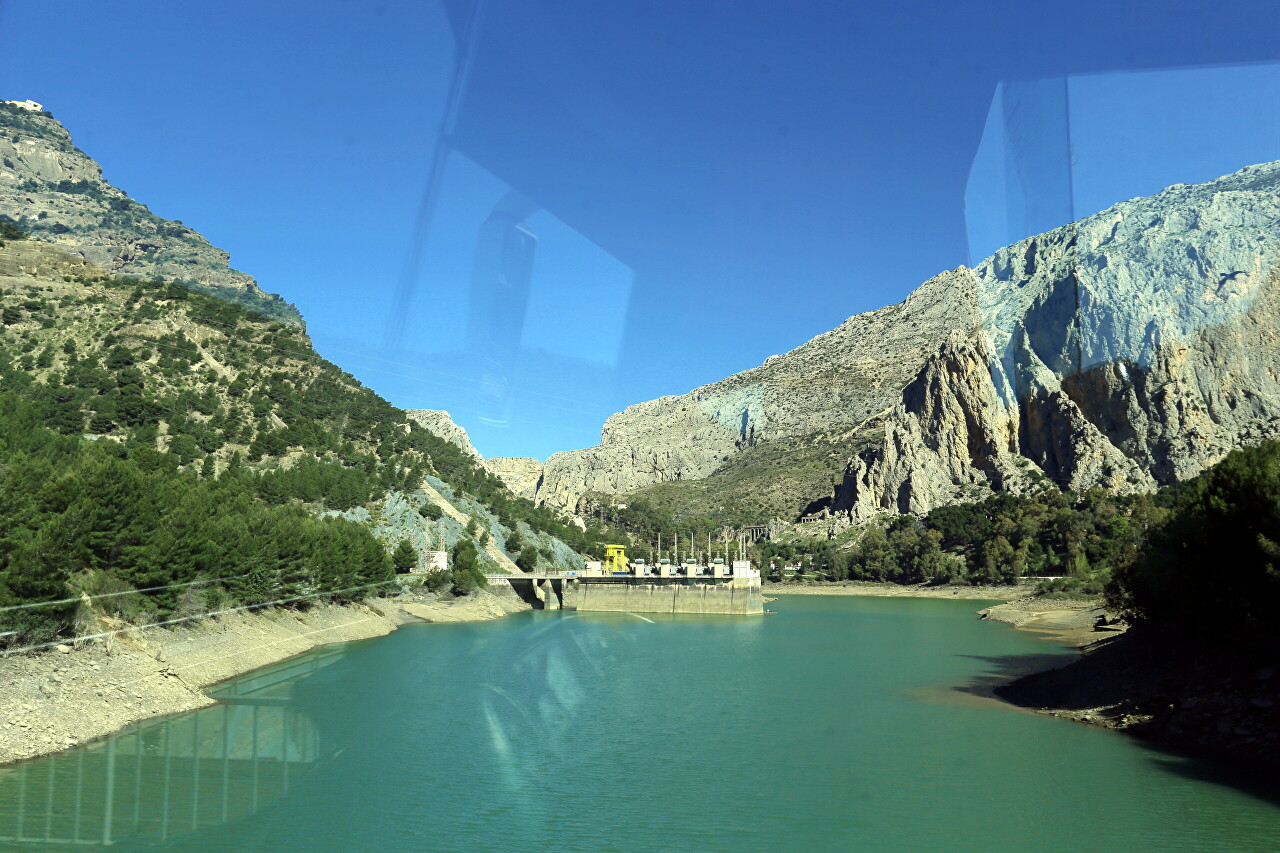 Then the road goes along its right bank. 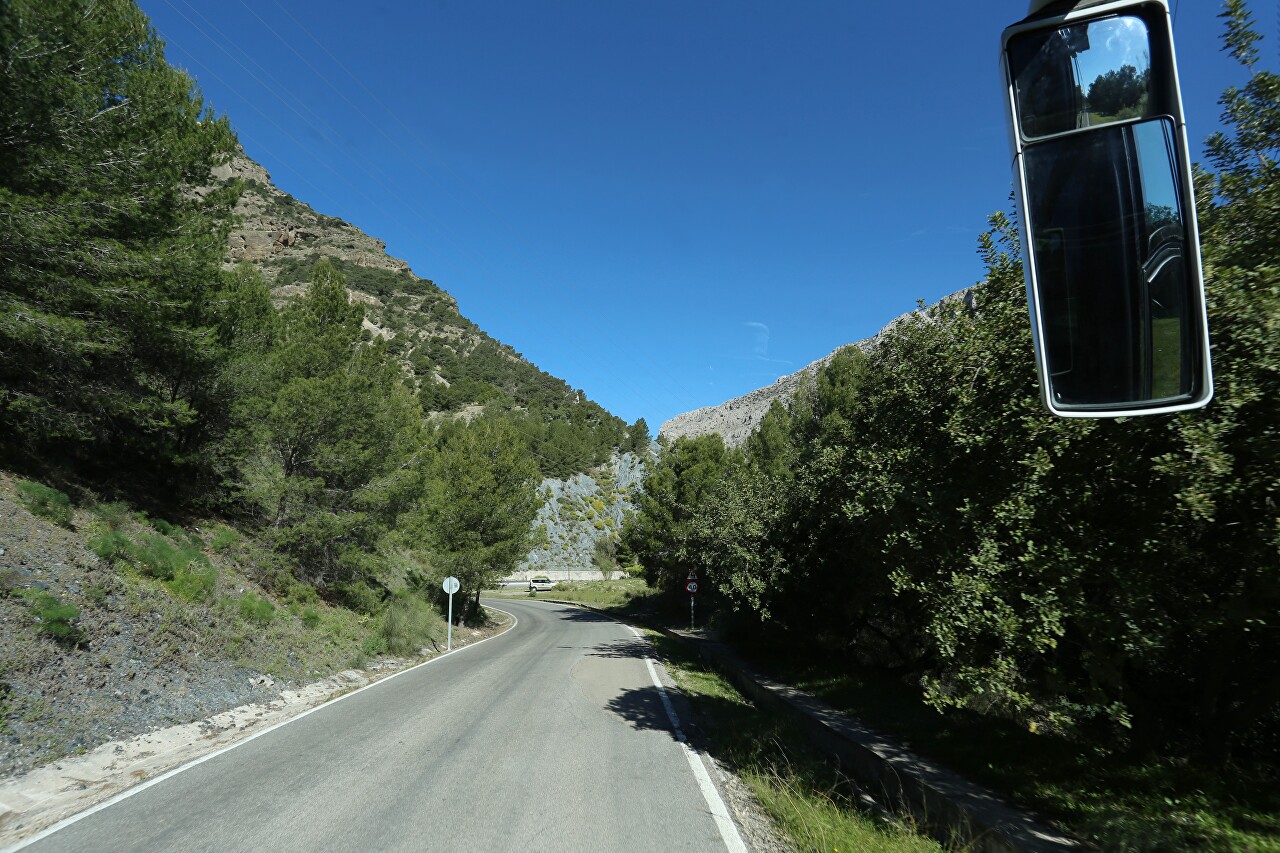 Ahead is a rock mass cut by the Guadalhorce River. 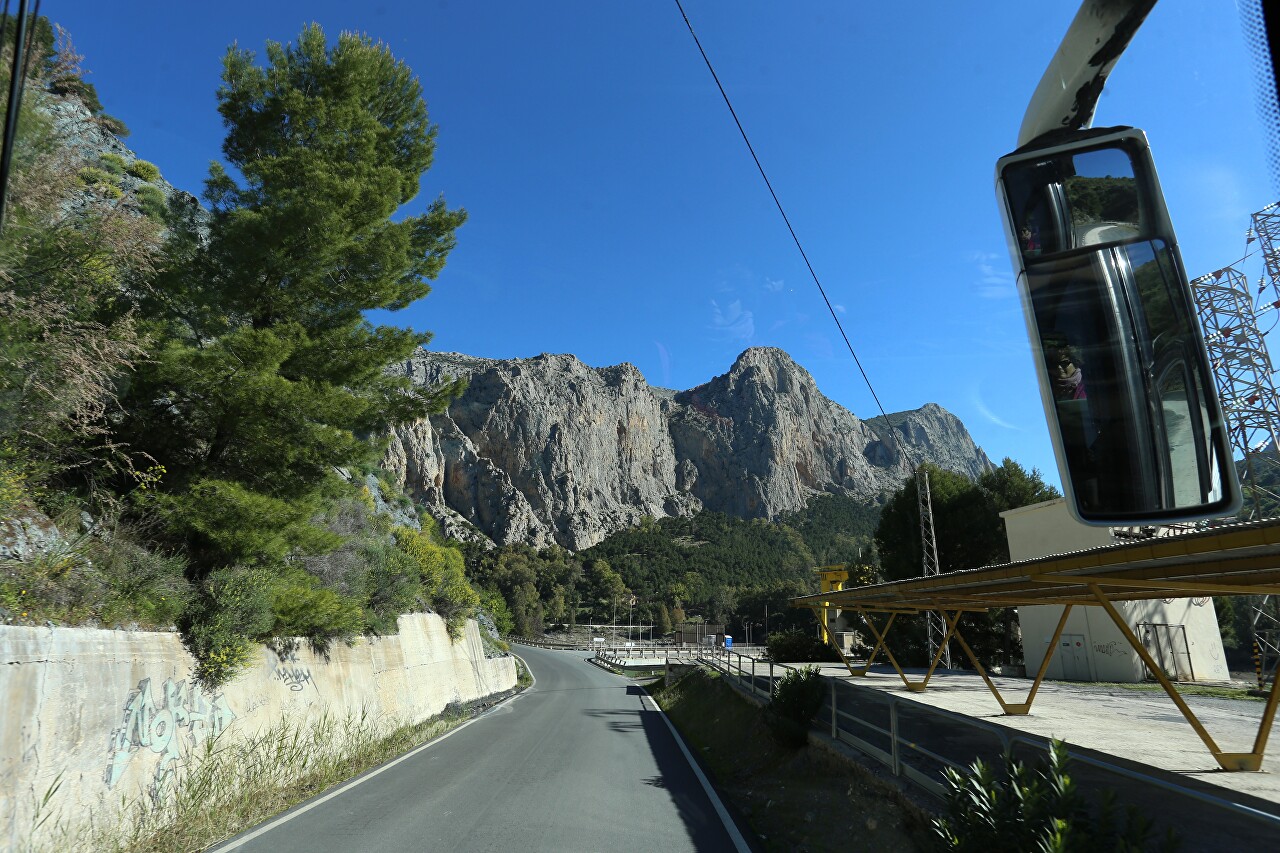 The first object worthy of attention is a pumped storage power plant. The power plant deserves a separate article, more on it later. In the meantime, we are driving along the steep bank of the reservoir. 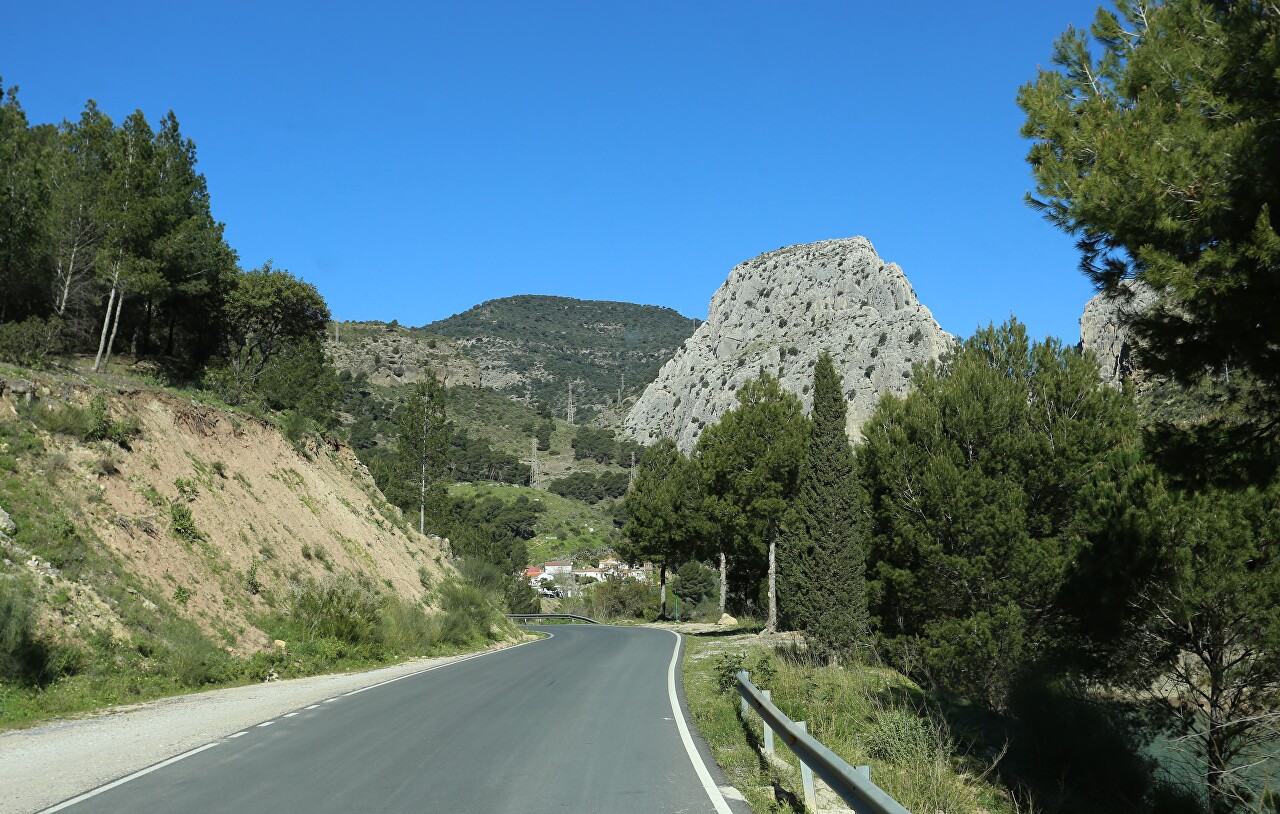 And here is the gorge itself, along which we have to pass. 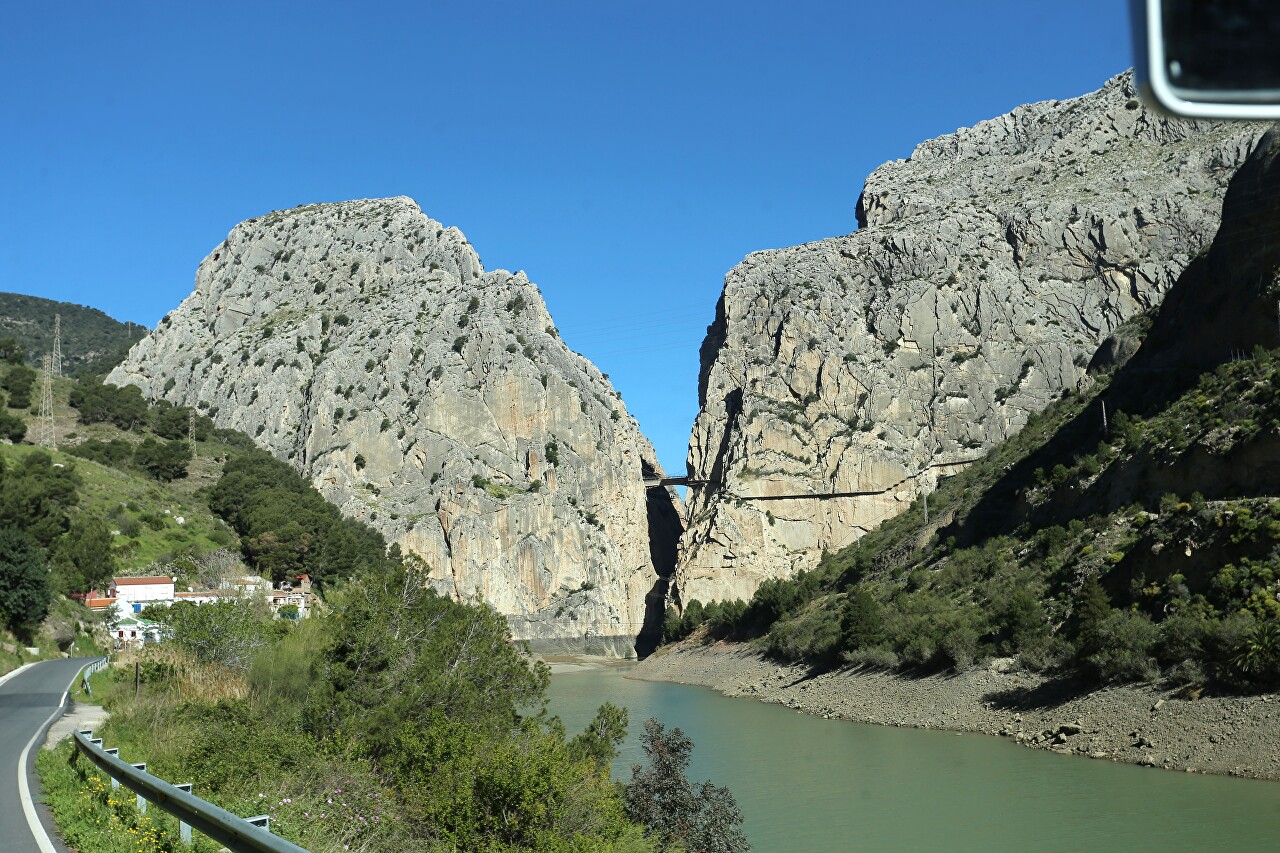 The path that clung to the sheer cliff caused a stir in the bus. 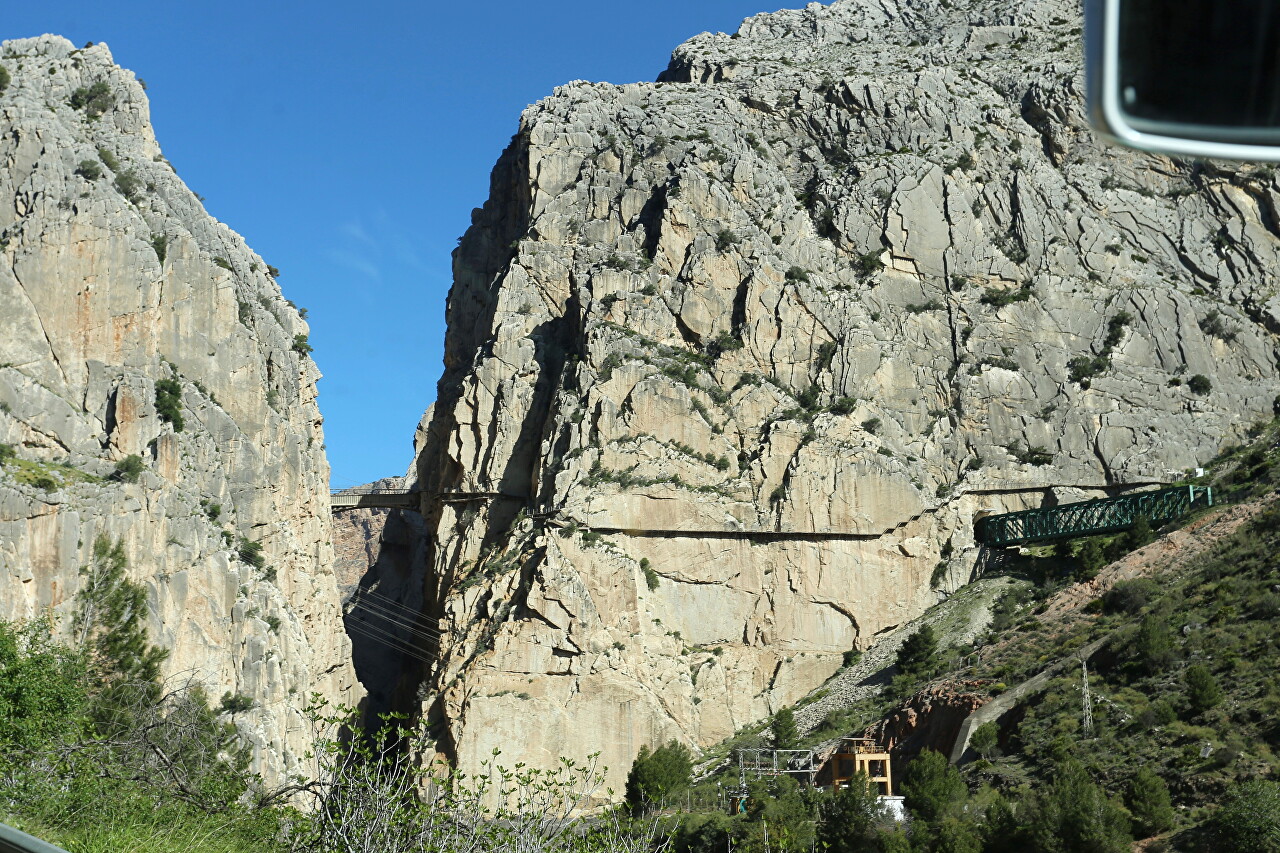 The gorge is often called El Chorro, after the railway station, but its real name is Desfiladero de los Gaitanes. 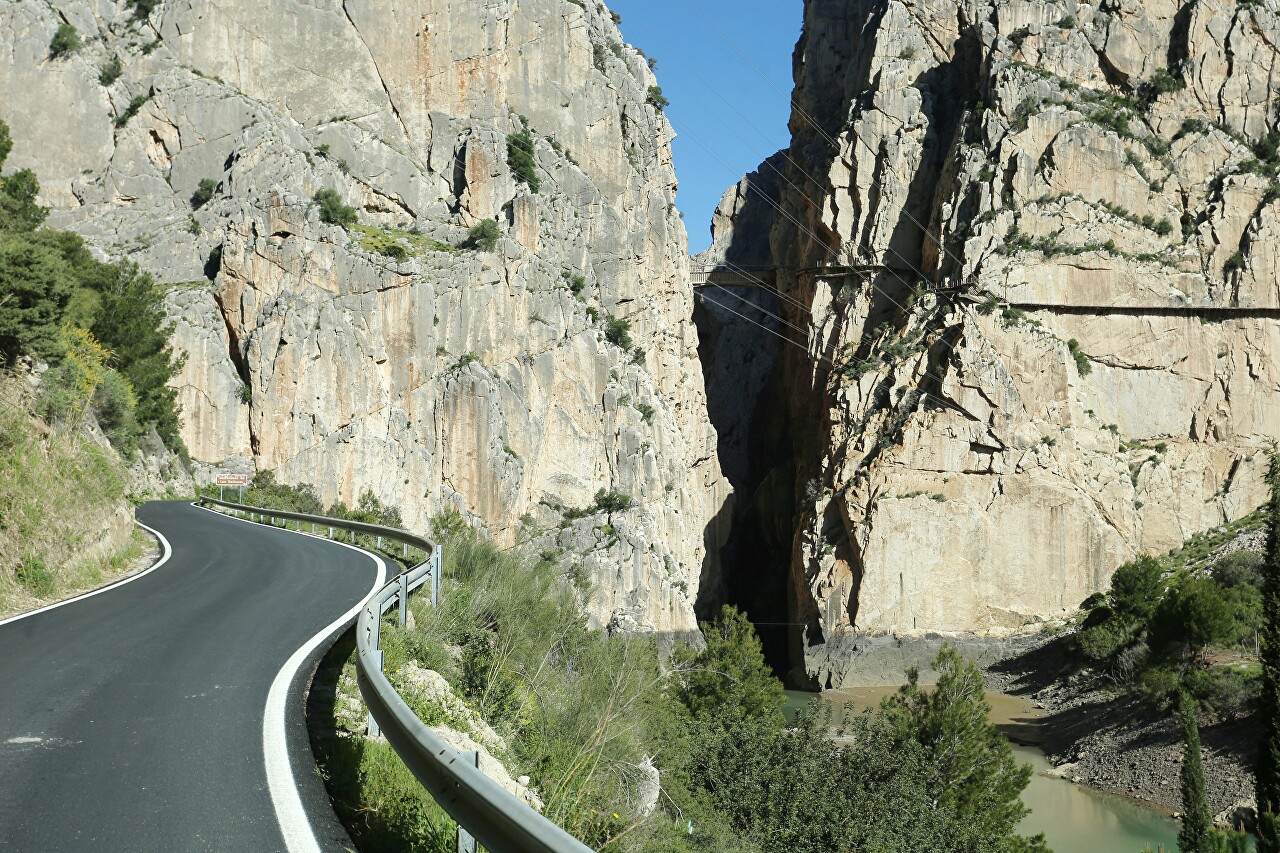 Now you can see the suspension bridge, one of the most exciting sections of the route. The Royal trail is still completely deserted - from the newly opened northern entrance, you need to walk for 3-4 hours. 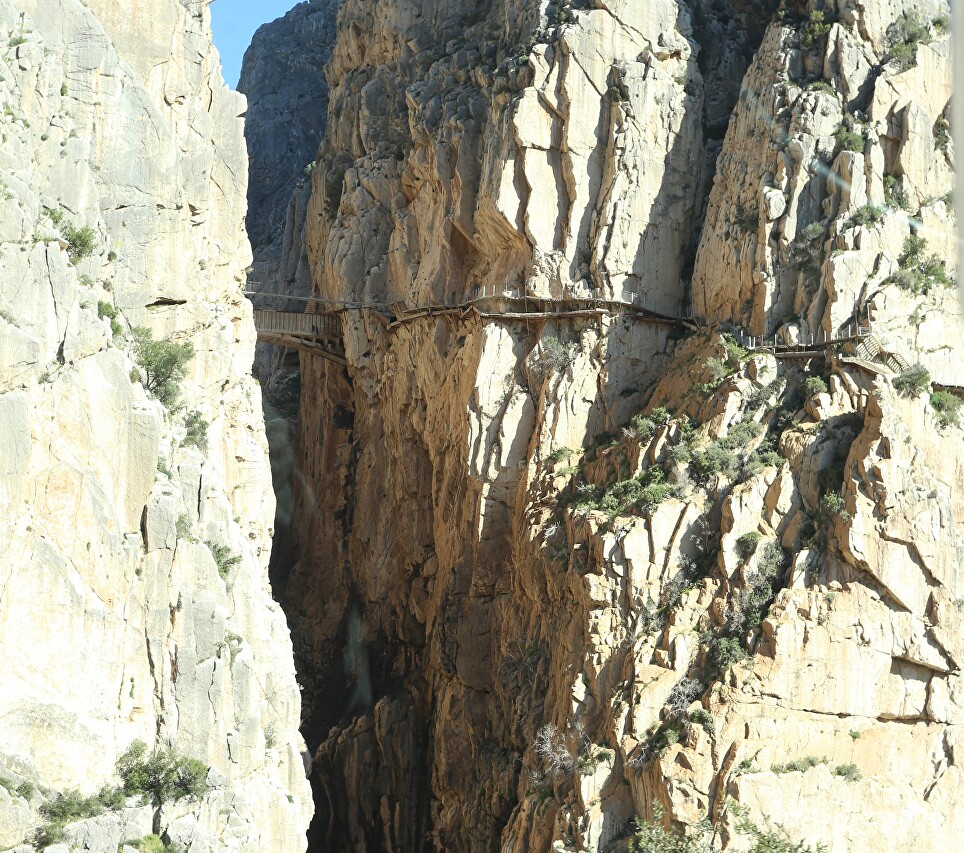 Let's appreciate the grandiosity of nature's creation - the height of the sheer cliffs here is about 150 meters. Railway bridge at the entrance to the El Chorro tunnel. 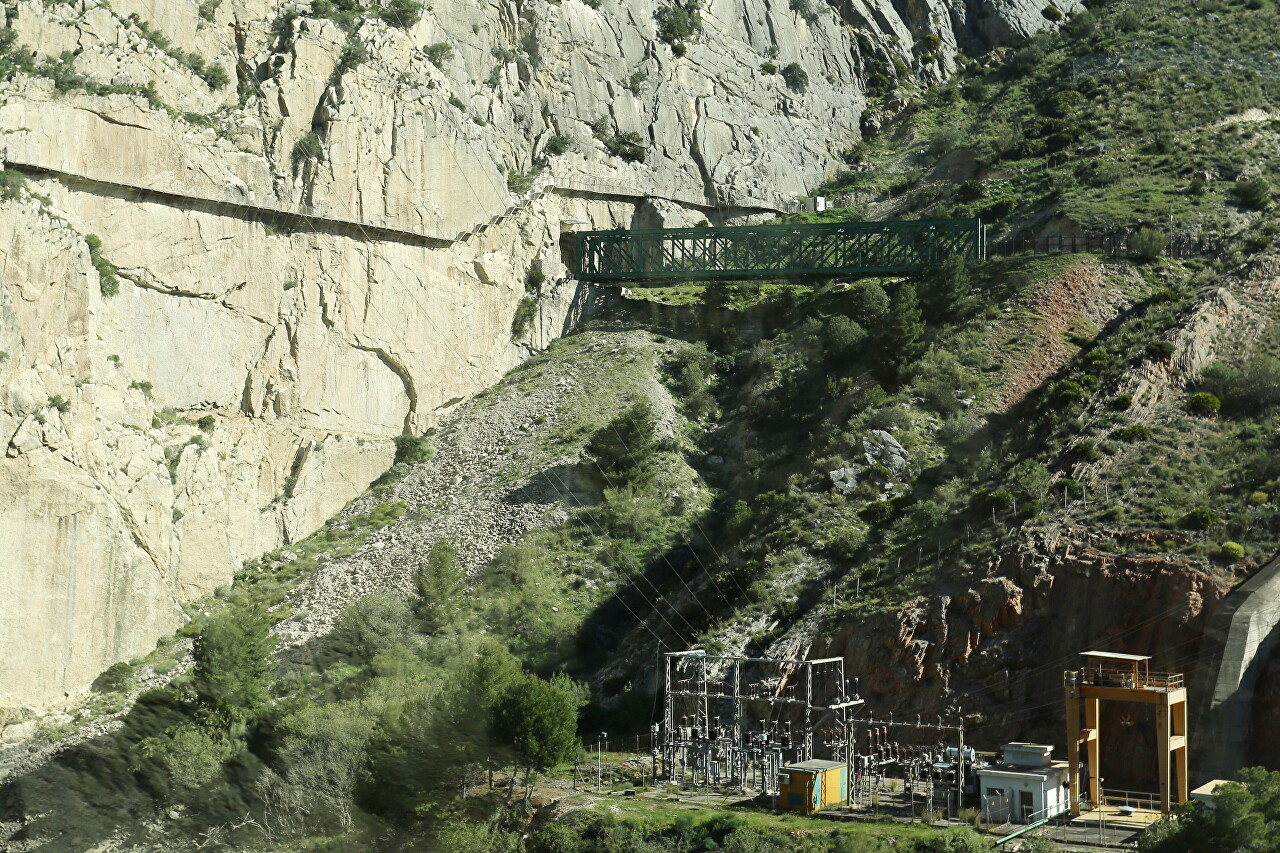 Further on, the road narrows considerably, passing through a narrow terrace above the Granado Stream, where buses leave one at a time. Ahead is the tiny village of Villaverde. The Church of Our Lady Villaverde (Ermita de Nuestra Señora de Villaverde) is one of the attractions on the El Chorro - Bobastro cycling and walking route. I originally made plans to go through it as well, but this requires another full day. 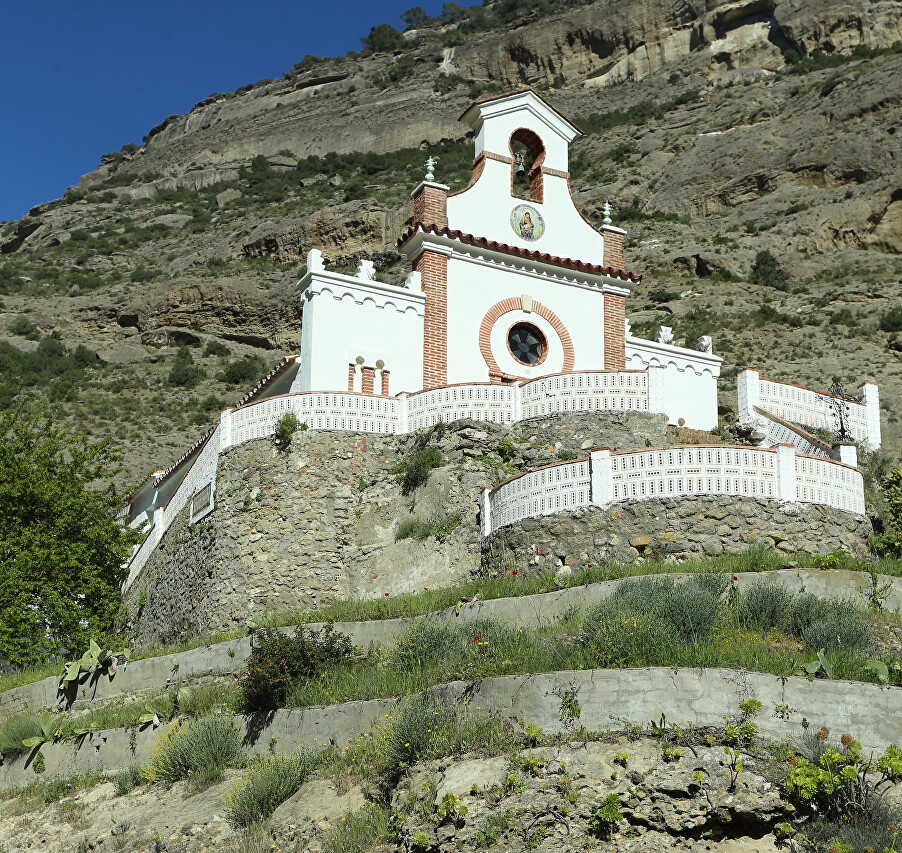 At Villaverde, the road crosses the Granado Creek, now with sheer cliffs hanging over the right side. 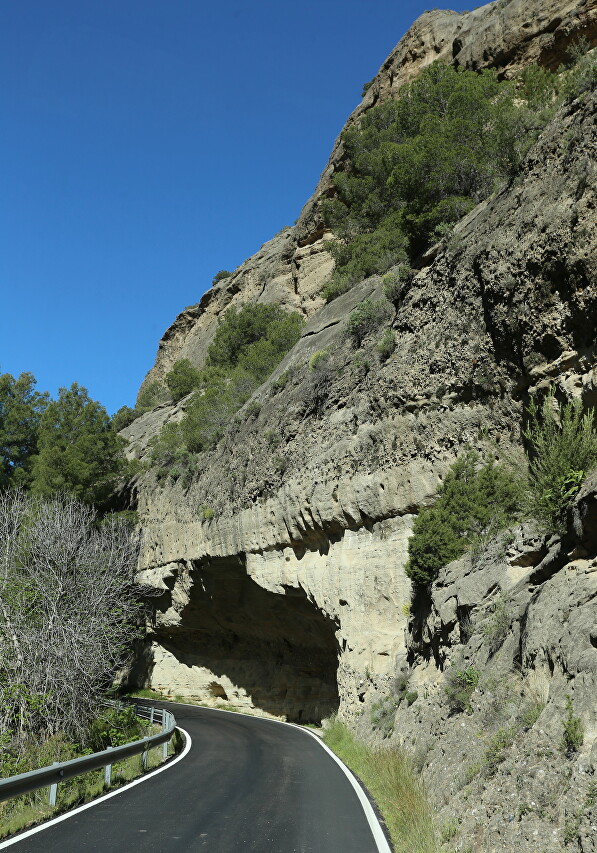 The black rocks reminded me of the craters of Mount Etna, which I "conquered" last fall. 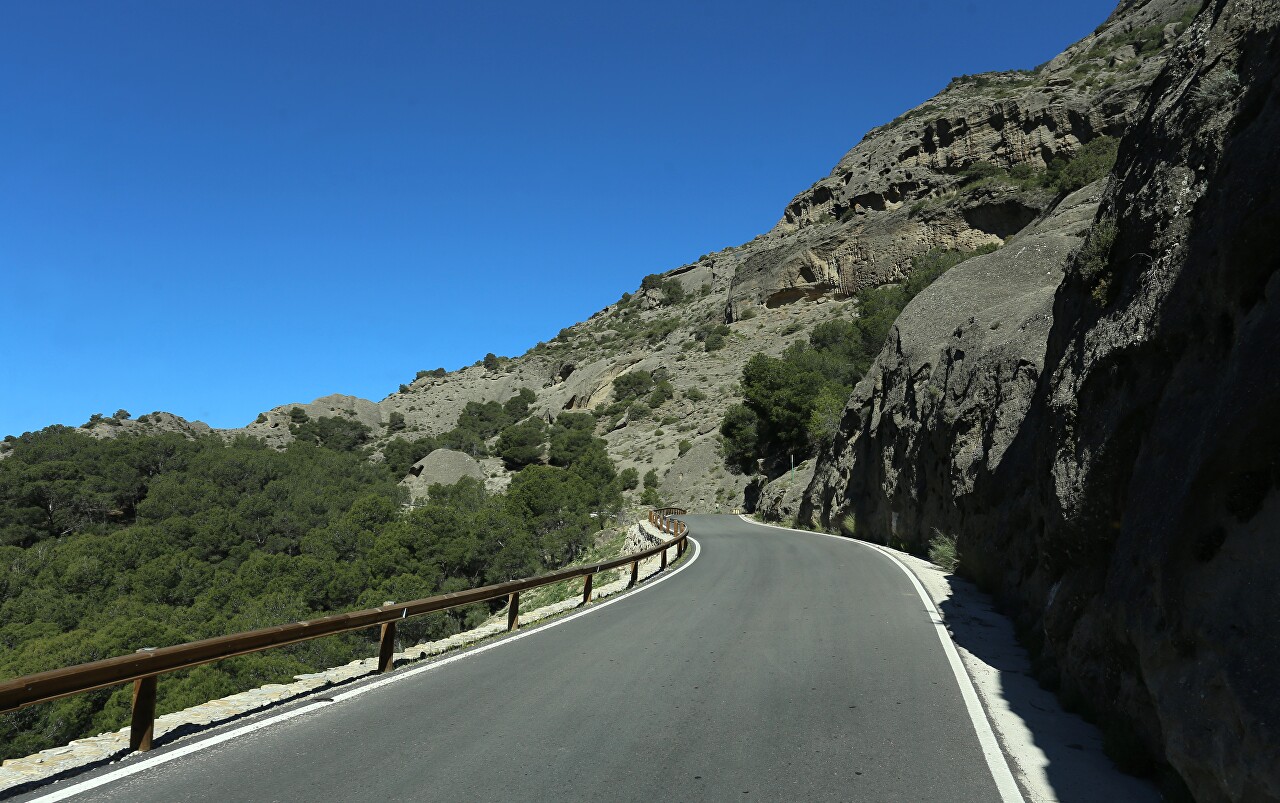 The road goes around Pico de Cueva, which can be translated as Mountain of Caves. 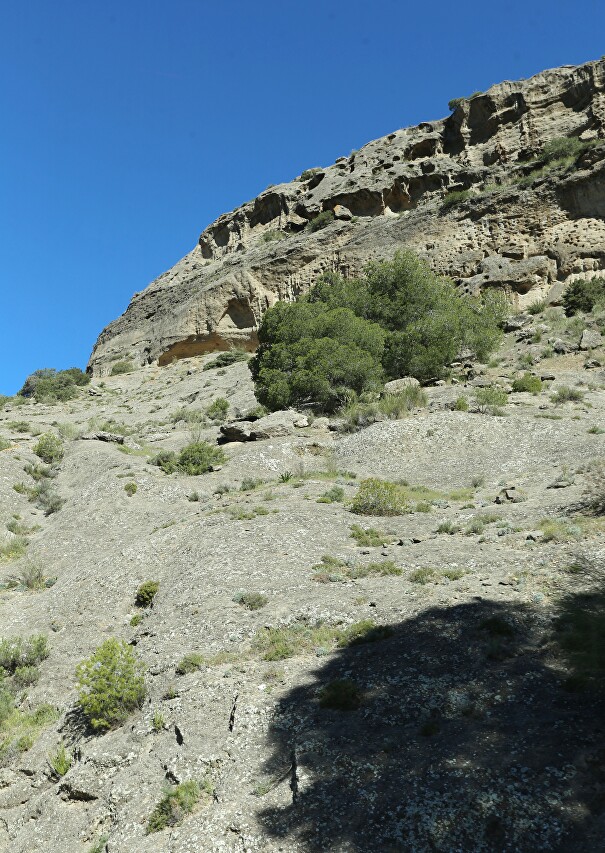 Indeed, you can see a lot of voids in the rocks. Another dangerous area, a sharp turn hidden by a rock. This Audi had to back up to let our bus pass. Around the bend, we can see a section of perfectly smooth rocks that remind us of the glacial landscapes of Norway and Karelia. 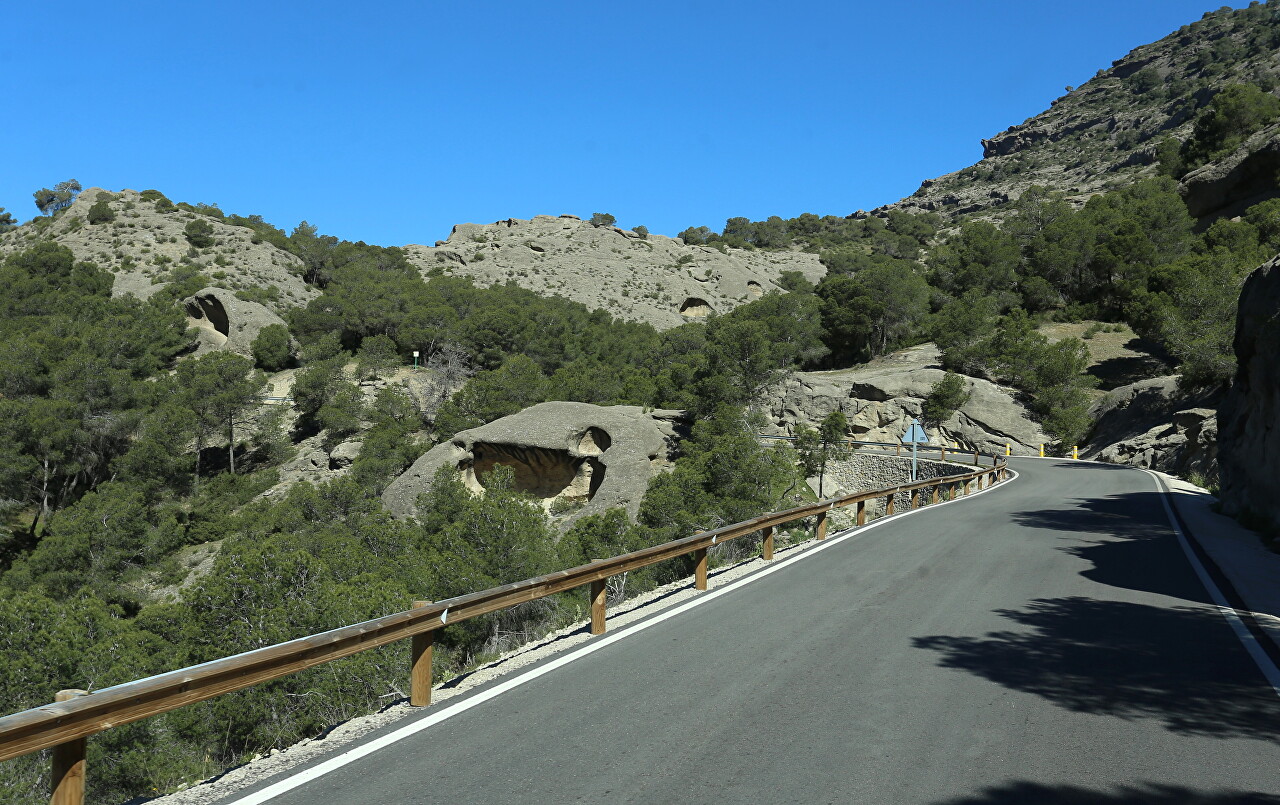 And these rocks, presumably, have the same origin - an ancient glacier descended from the top of Cuevo along this breakup. We leave on the left a huge construction site of the campsite - around the Royal Trail, which has recently become available to the "non-extreme" public, infrastructure is being developed for active and ecological recreation. We pass the tunnel, above which the restaurant El Mirador Ardales is located. The restaurant's terrace offers a wonderful view of the Conde del Guadalorse Reservoir. 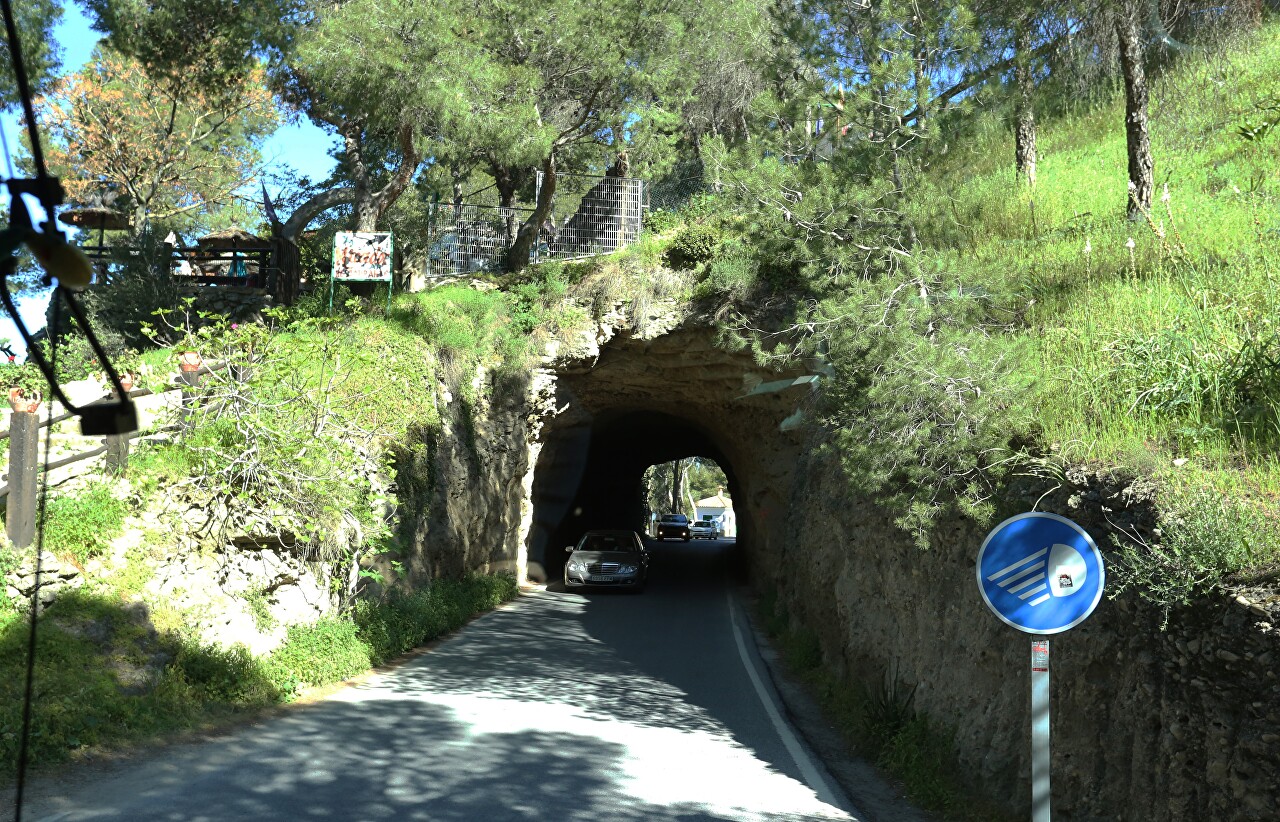 A group of tourists are photographed at the Small Tunnel (Túnel pequeño), leading to the entrance to the Gaitanes Gorge on a short but less picturesque route. Finally, our bus pulled up to Acceso Norte, the northern entrance of Caminito del Rey. Now we will have to walk back to the village of El Chorro on a picturesque route of about 10 kilometers.