Trip From Madrid to Barcelona. Beginning

Having traveled for 5 years in group tours around Europe, in March 2013 finally decided to go on an independent trip. I didn't have to think long about the destination - I had an open Spanish visa from a short new year's tour to Barcelona, as well as a desire to get to know the country in more detail, which I visited in the spring of 2012. That trip left not only pleasant memories about the Pyrenees country, but also some annoyance that a lot of interesting things were only glimpsed from the bus window, or running as a tethered guide during short stops.

I started preparing for the trip simply by opening Google map and drawing this route without going too deep into the road details. At the same time, he allocated five days for Madrid and the surrounding area, two days for Barcelona, and one day for all other cities. 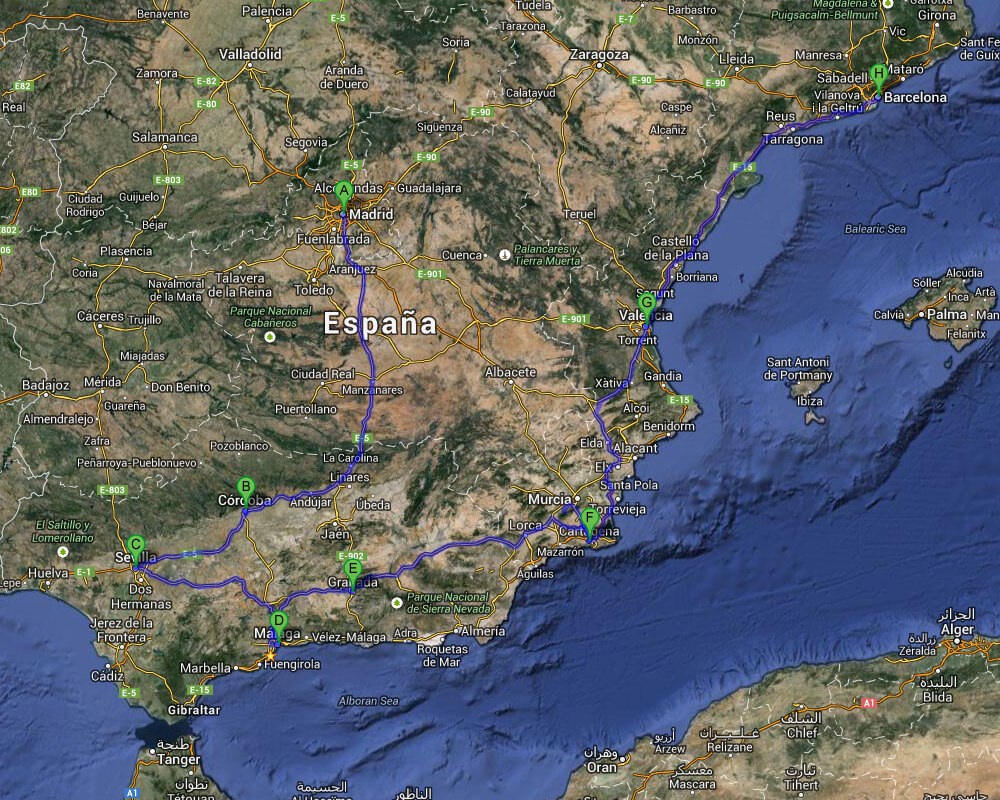 Well, then, actually, the preparation itself - first, the search and purchase of cheap tickets, which turned out not so cheap - the trip was planned for the may holidays. The next step is booking hotels for Booking c parallel study maps of the area (by the way, I found it quite fascinating), the hotel must be close to the historical quarters, and from bus - long-distance means of transportation was chosen the bus. Well, then-buy tickets for these very buses on the site movelia.es. If a Booking it's simple - the site is multilingual, Russian, naturally present, then Movella had to look for info in the Internet (most of it is stupid), but more random and understanding the Spanish words. There is also an English version, but my knowledge of this language was not much different from my knowledge of Spanish. As it turned out later, the language is simple, clear and most importantly, pleasant - almost everything is written and heard, and you do not need to break the language.

Deciding what to go with, I came to the conclusion that there was nothing to go with. The travel bags I used earlier were only suitable for when the bus pulled up to the hotel's front porch. For the "Autonomous" needed a backpack...only after touching on the essence of the issue, I realized that the choice of a backpack is an important matter, so I began to carefully study the relevant Internet literature, and finally decided what kind of backpack I still need. Naturally, in my village such a product is not available for sale, there were only children's knapsacks painted with parrots, and canvas bags from the time of the woodpeckers, in our time suitable only for transporting potatoes from the country . Stores of the regional center also did not please - or offered cheap tools of questionable strength, or branded models that cost large tyschshi. There was no time to order in the online store (especially since the Russian post was then in complete collapse), and I didn't want to buy such a thing without changing it-without feeling it somehow. I just had to get through with my Luggage to Madrid, and then buy what I was looking for in the Department store El Corte Ingless, whose catalog I had previously studied. Knowing from the experience of previous trips that you can fill a bag of any size with things, and on a trip many of these things are not removed from the bag, I began to form a list of essential goods. Surprisingly, it was very short:

Everything else-casual and warm clothes-on yourself. All this stuff, including photo equipment, easily fit into a small folding bag, which still had to be checked in the Luggage solely because of the knife. 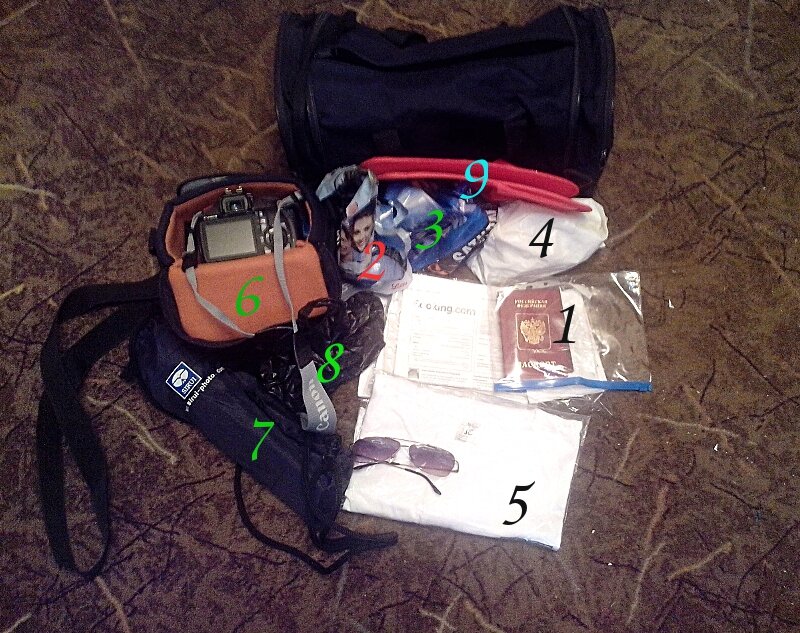 After a five-hour Lufthansa flight from Yekaterinburg to Frankfurt-on-the-main, I ran around the huge airport a little, in fear of missing the plane to Madrid (between flights only 1:05). But the anxiety and haste were completely in vain...the last time I flew on a domestic flight was 15 years ago, and I remember well such concepts as" storage " and the termination of check-in one hour before departure, and the last check of tickets in the pouring rain on the tarmac at the plane's ramp. I have never flown with any transfers at all. And then it turned out that the modern air service in Europe is not much different from tram or metro trips - the main mass of passengers comes in 15-20 minutes, passing through the turnstile, where a barcode is scanned on the boarding pass and pass through the gallery directly into the cabin of the aircraft. The flight to Madrid took about two hours, the aircraft of the same Lufhansa, only orders of magnitude easier than on an international flight. For example, one of the flight attendants constantly gave out some remarks on the broadcast (in German), which made the whole cabin, which consisted mainly of Germans, laugh. Drinks were distributed throughout the entire flight. Finally, our plane comes in to land at Barajas airport, and the four towers of Madrid's business center are visible against the backdrop of mountains. 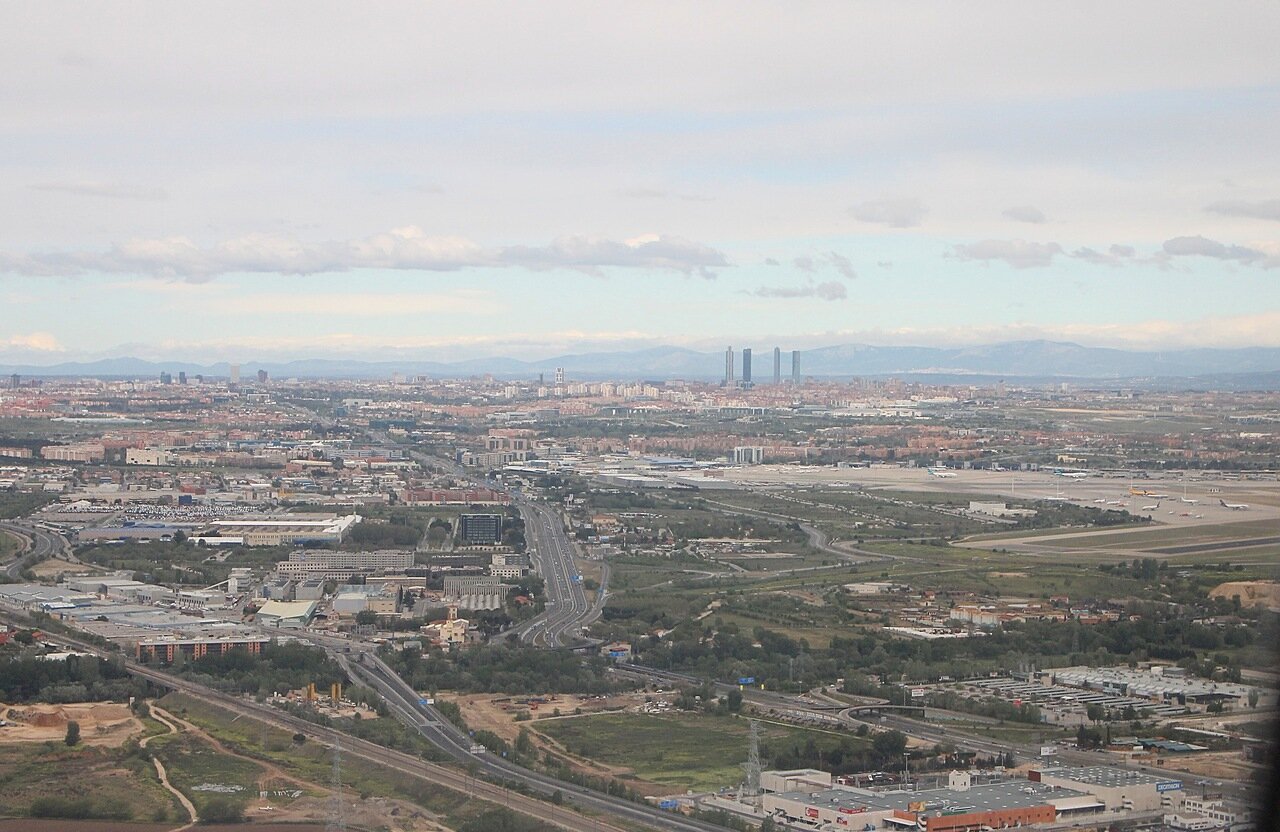