Most of the shore of the Teele Bay is occupied by a park, the name of which comes from the ancient world. Hesperia, or Esperia in ancient Greek mythology, is a beautiful garden inhabited by nymphs basking in the golden rays of the setting sun. In the first half of the 19th century, one of the local merchants built a villa here, calling it this romantic name. At that time, it was a rural area, a virgin forest, where rare cottages were scattered. 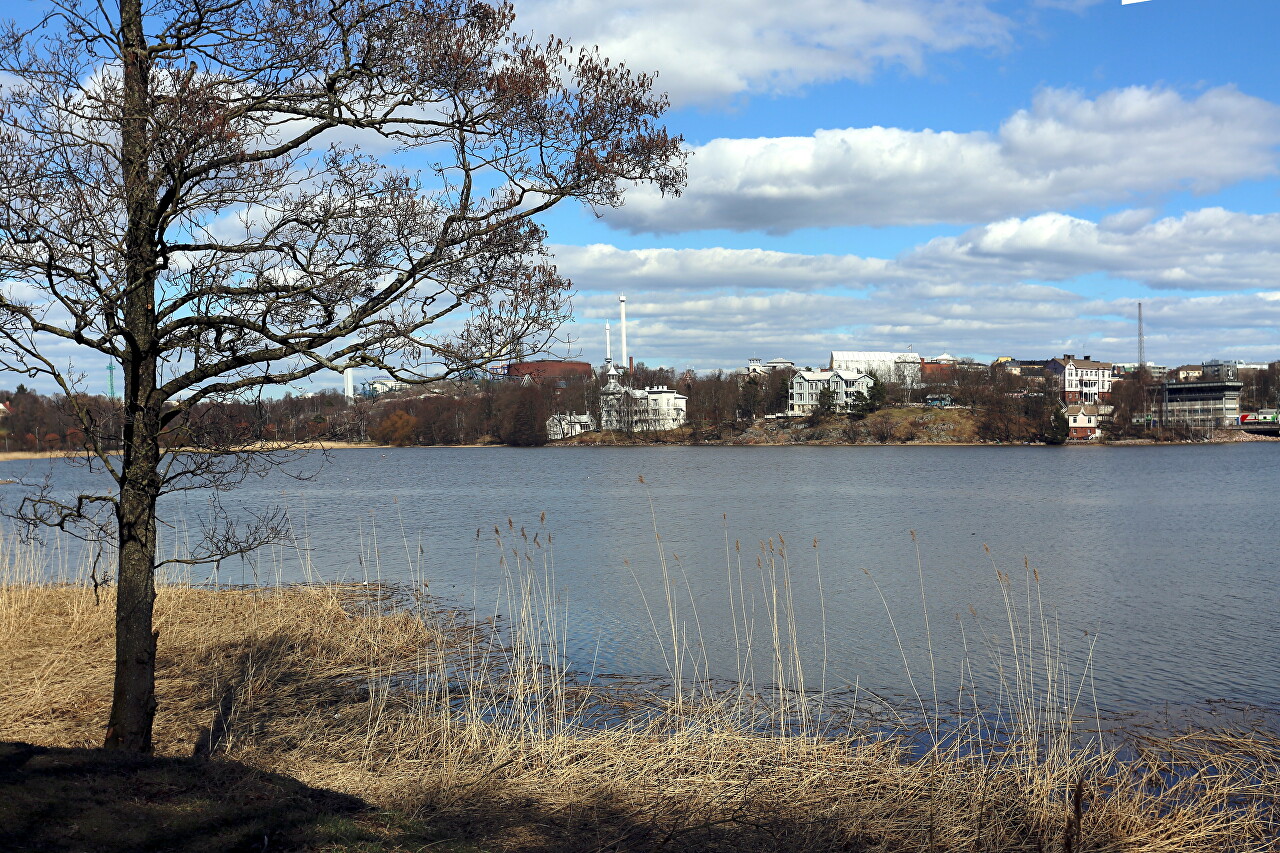 Then a country restaurant with the same name appeared next to the villa, which quickly became popular due to its picturesque location. At the end of the 19th century, the city experienced rapid industrial growth, and the island of greenery was already within the city limits and surrounded by industrial enterprises. The lease agreement of the land owners of the villa ended in 1898 and the city authorities did not renew it, declaring the territory a Hesperian puisto park area. 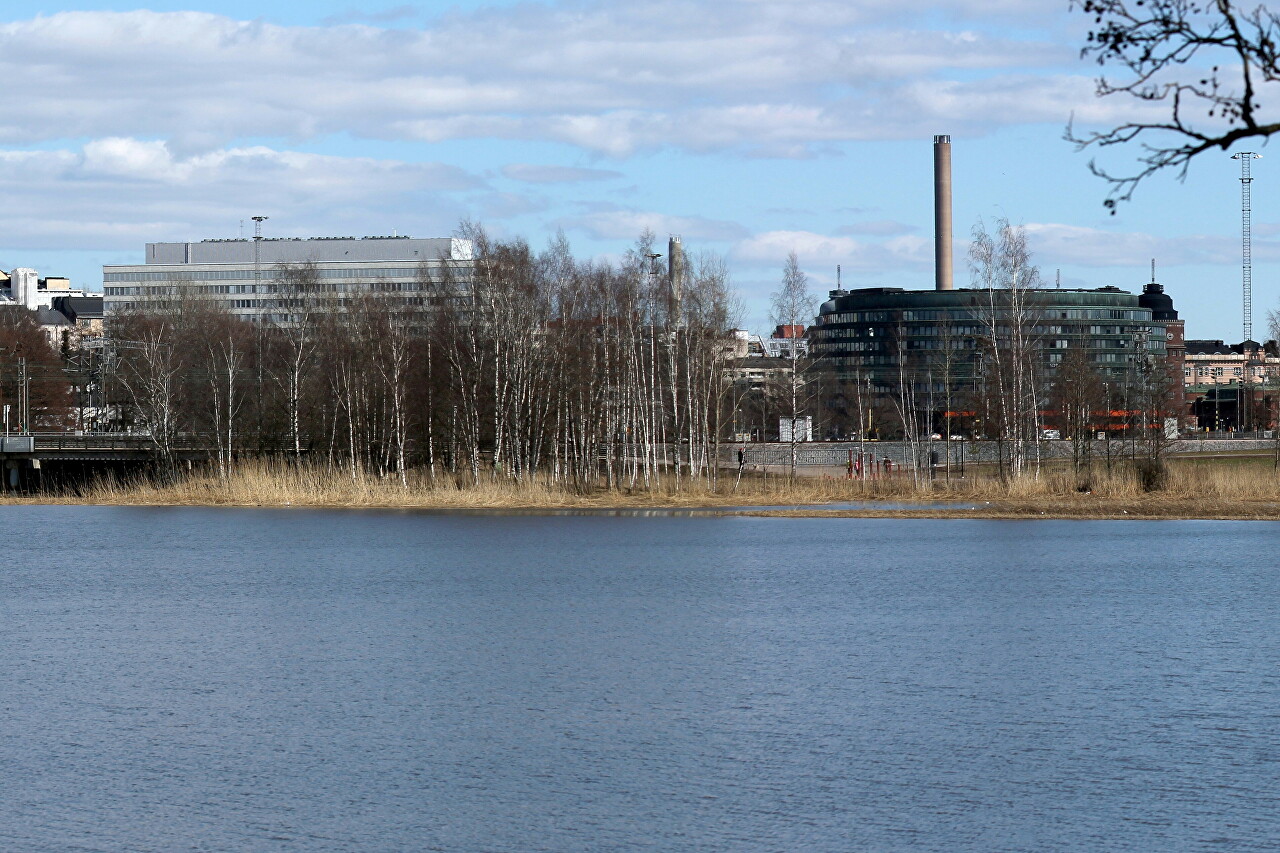 Opera Ophidia is the creation of avant-garde artists Ossi Somma, Reyo Paavilainen and Pertti Mäkinen. The monument was created in 1999 on the occasion of the 20th anniversary of the Creative Union of Artists. In 2000, Helsinki assumed the temporary title of European Capital of Culture, and an exhibition of urban sculpture was held in the park, which was when this structure appeared here. A snake made of cobblestones in a wire frame immediately became popular with children walking with their parents in the park. The artists decided to keep the monument, although the ownership rights to the sculpture still belong to them. The name literally translates as "Snake Opera". What this means, I can't even guess. 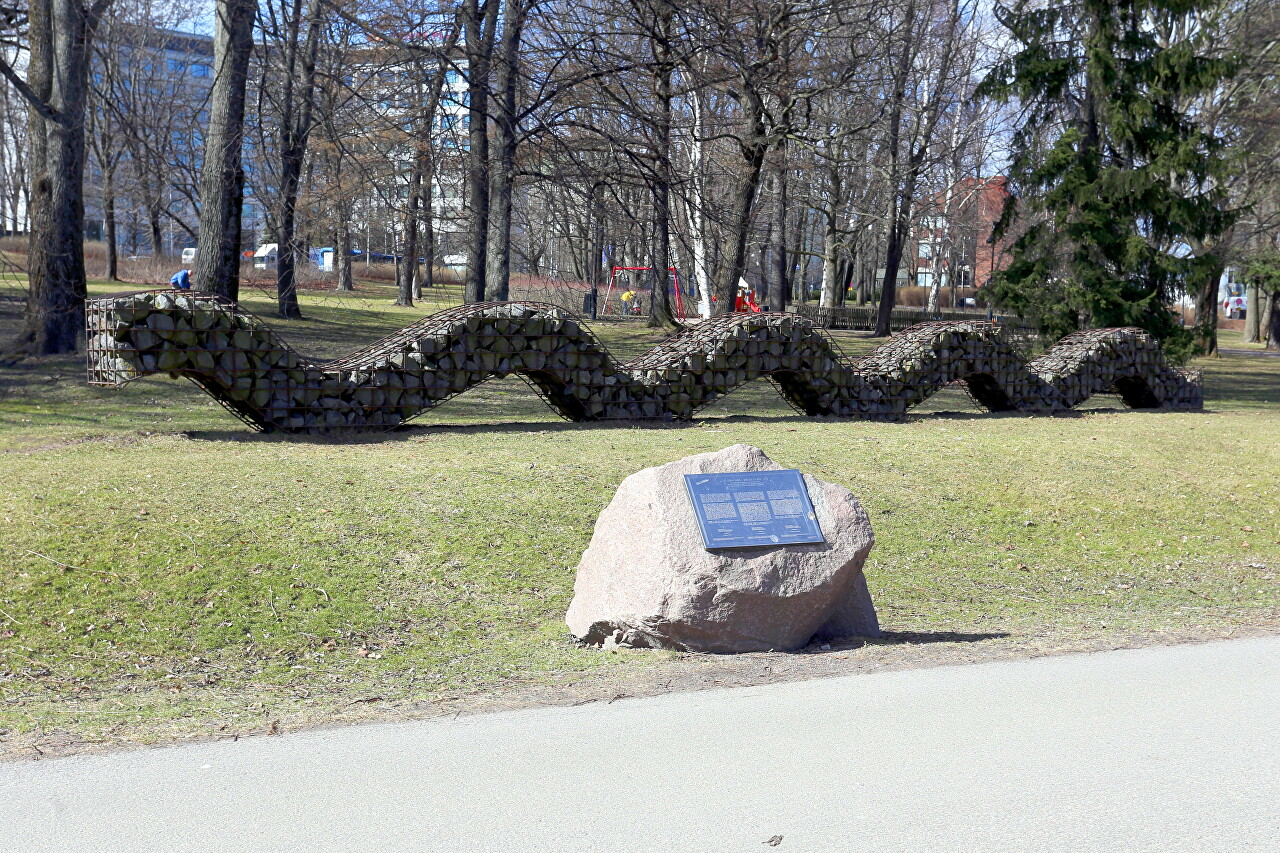 A plaque erected in memory of Chinmoy Kumar Ghose by his Finnish followers. Sri Chinmoy Center, a neo-Hindu religious organization founded by him, preaches peace between people and unity with nature. 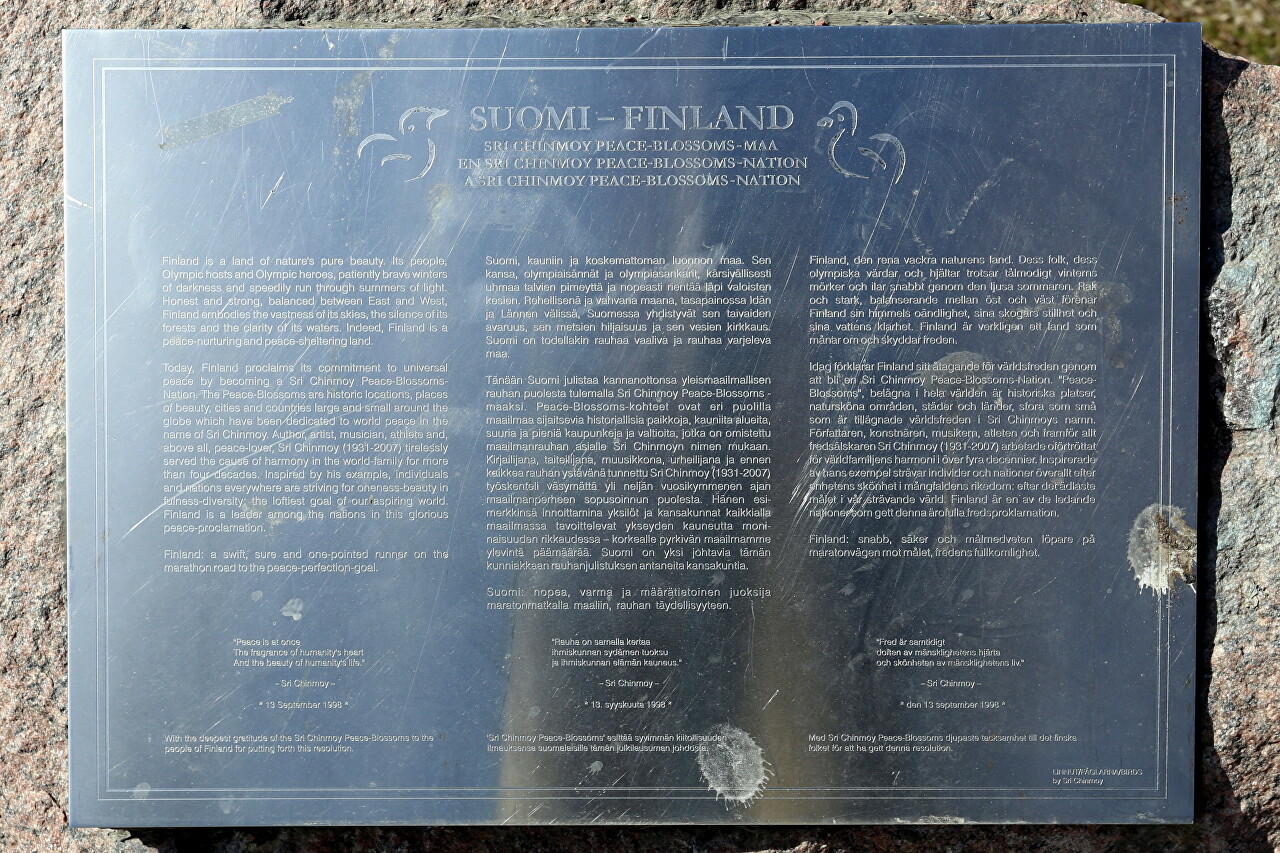 On the water surface of Teele Bay, you can see both local and migratory birds. 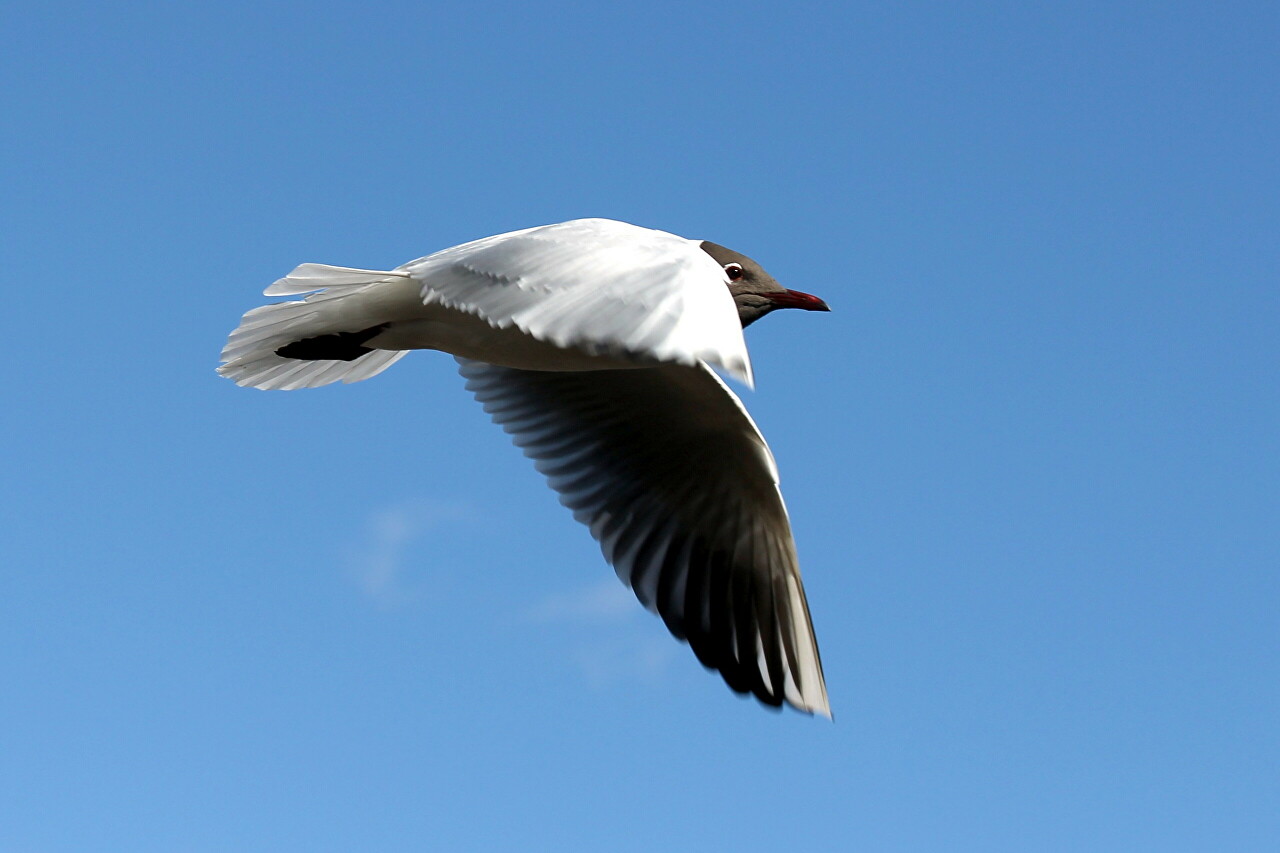 In the southern part of the park is the Finlandiatalo Palace, built in 1967-1975 as a concert and exhibition complex. The author of the project is architect Alvar Aalto. 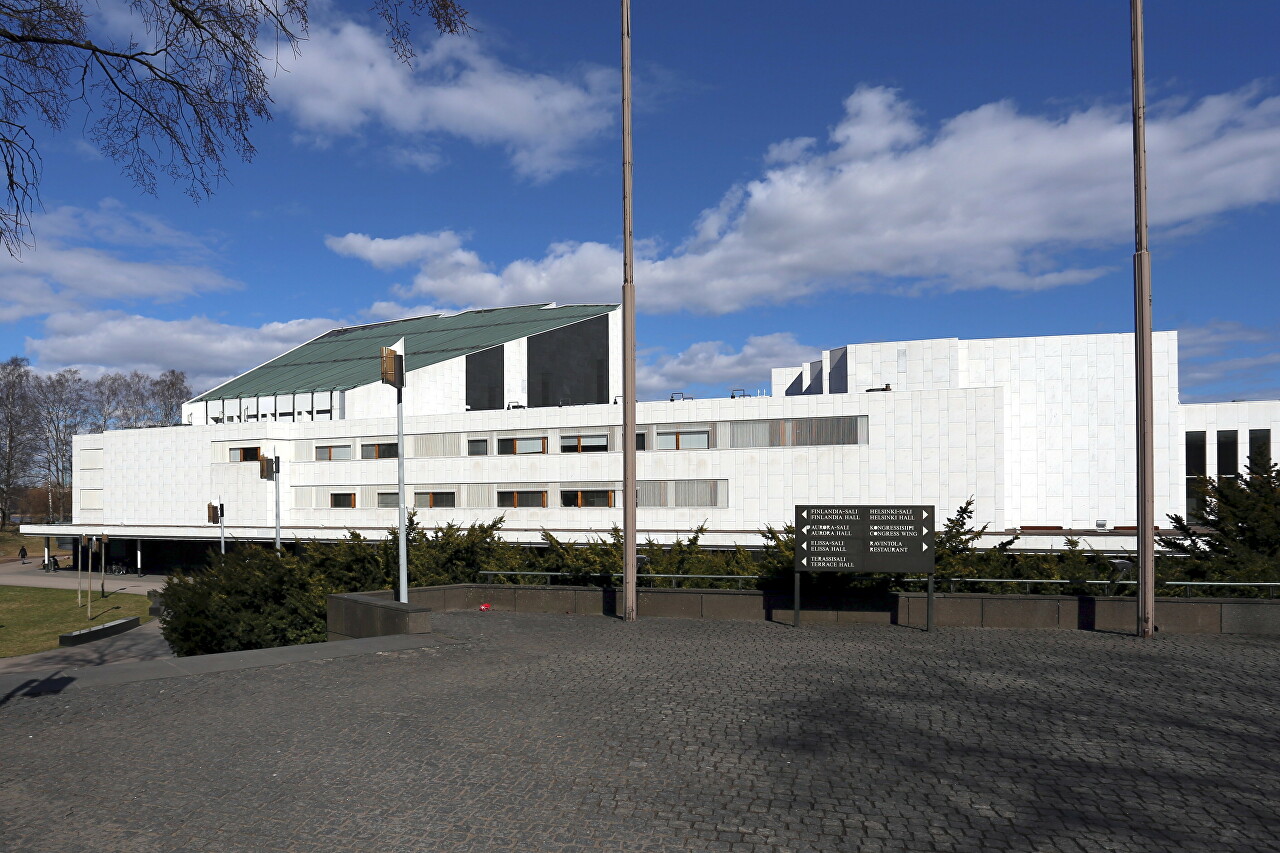 While strolling through the park, you can enjoy a panoramic view of the eastern shore of Töölö Bay. Linnanmaki Amusement Park (Milky Way)is visible on the left: roller coasters, ferris wheels, and other attractions, of which there are about half a hundred. A giant circular structure - a former water supply reservoir, now inside it are located attractions. 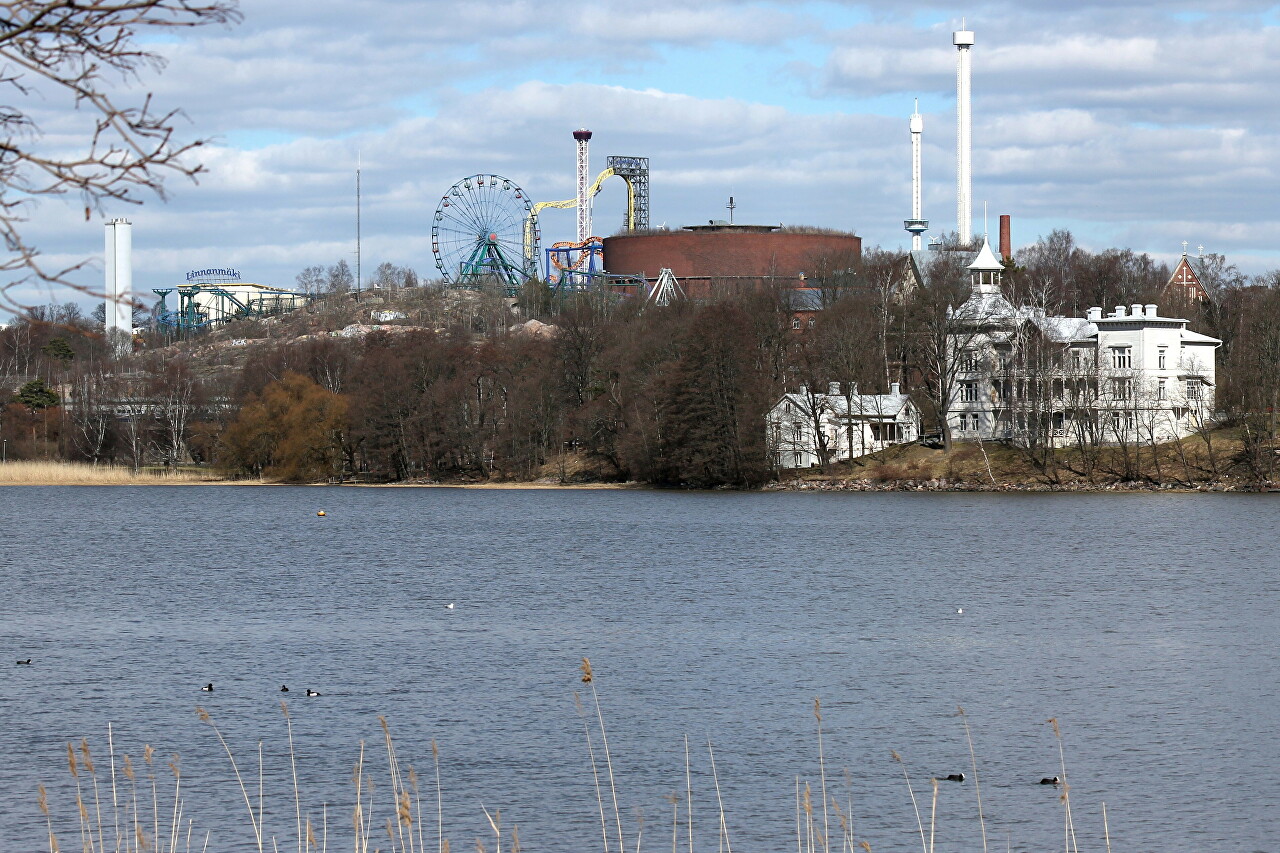 The hill on the opposite shore of the bay is called Linnunlaulu. This is a former country area, where several villas built in the second half of the 19th century have been preserved. 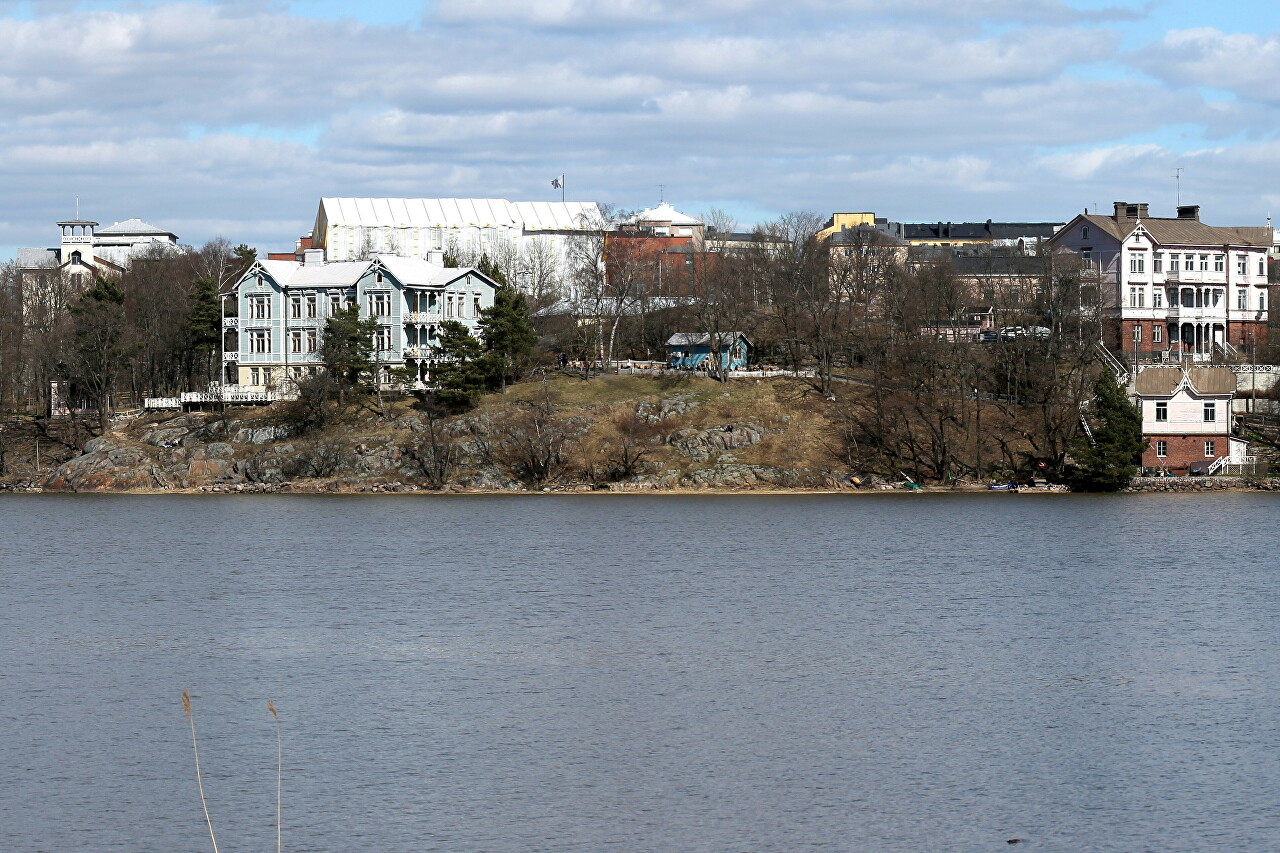 Villa Kiwi, or "Writers ' House". On the right, the two-story white house houses the most famous and prestigious sauna in Helsinki. 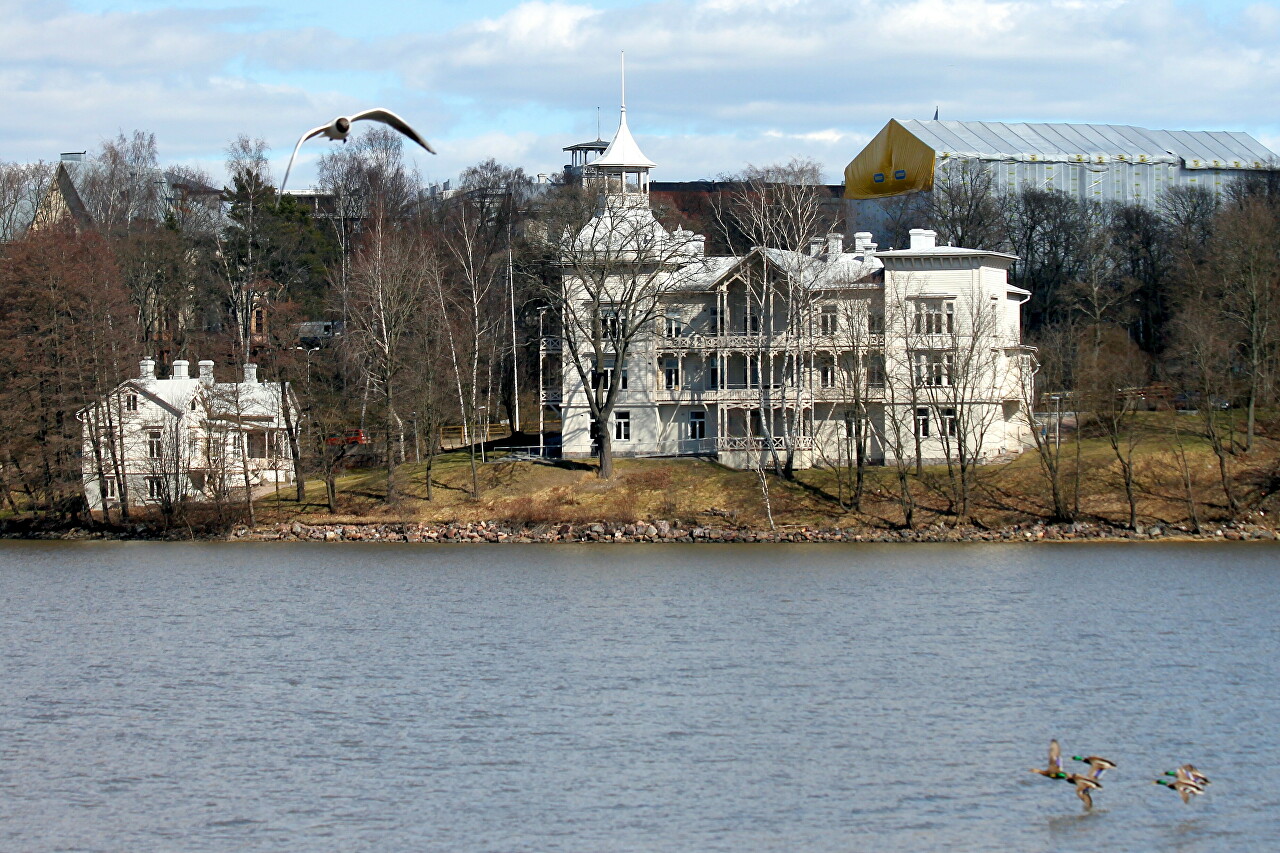 The house known as the" Blue Villa " (Sinisen huvilan) has traditionally been the abode of artists. Now there is a studio of a married couple of artists Marja and Joomla Heleniuksen (Marja ja Jorma Heleniuksen) and other apartments with interiors and furnishings of the early 20th century are rented out for a long time. 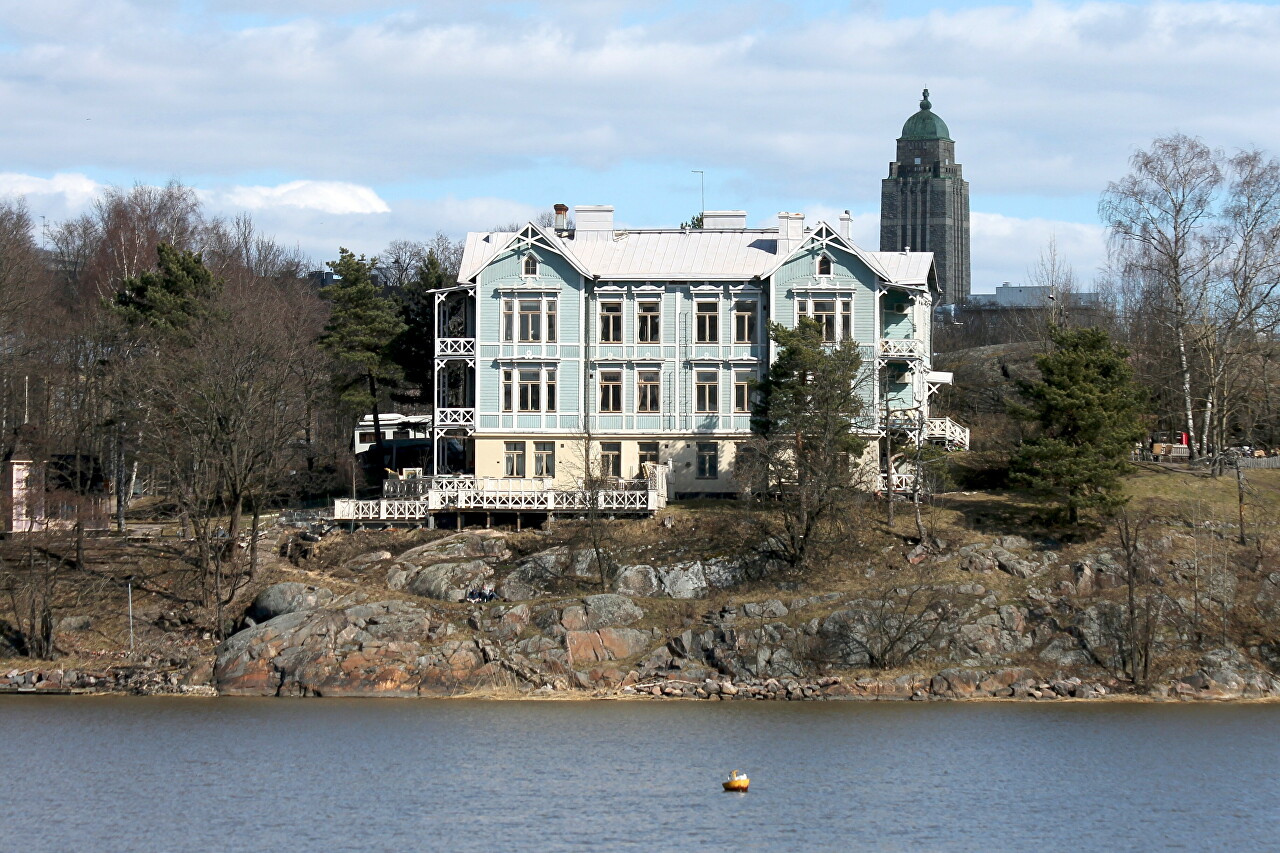 To the left of Linnunlaulu is Kallio district. 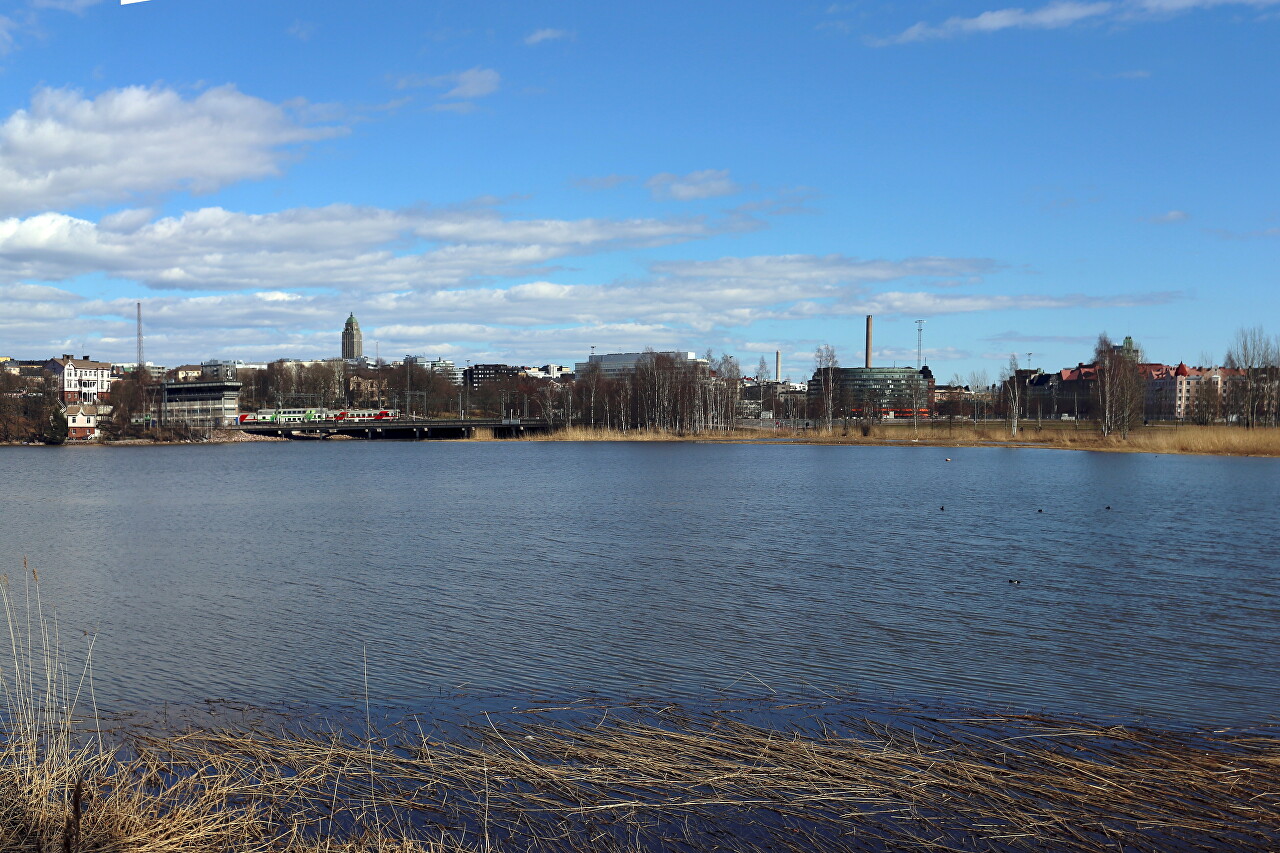 The blocks are dominated by the tower of the Kallion kuirkko church, where I visited a couple of hours ago. 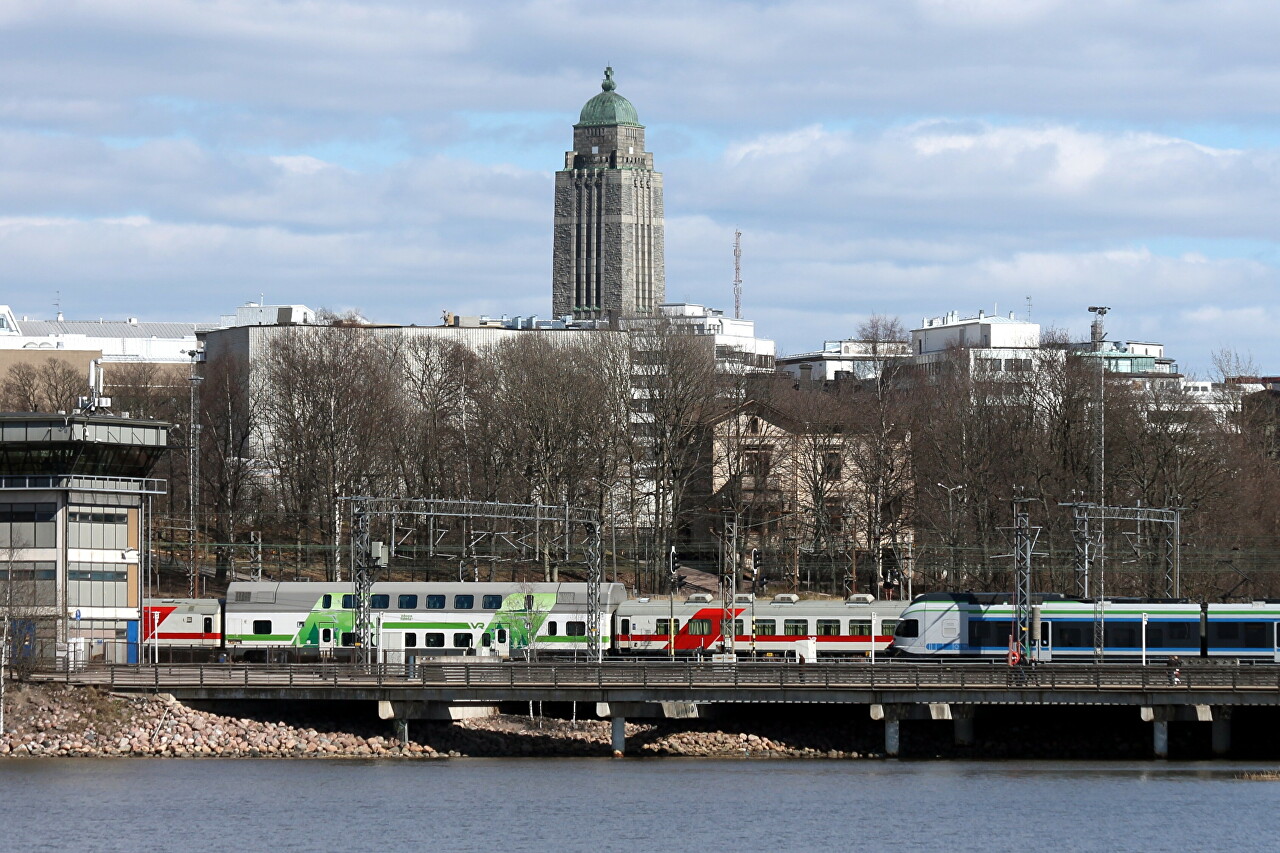 The Yumpyuryatalo, round house, an office building on Hakaniemi Square. 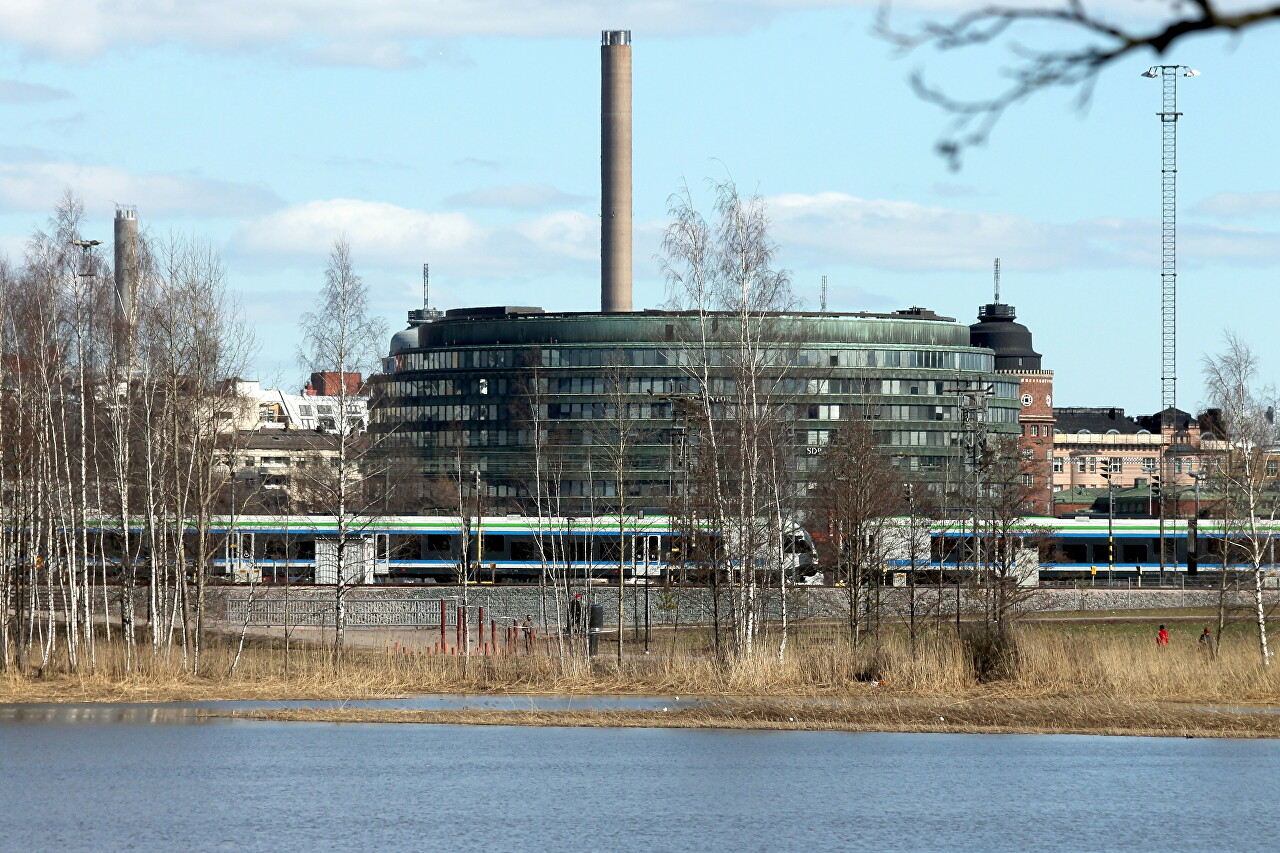 Closer to the city center, you can see the railway tracks of the Central Station, followed by the quarters of the Hakaniemi district. 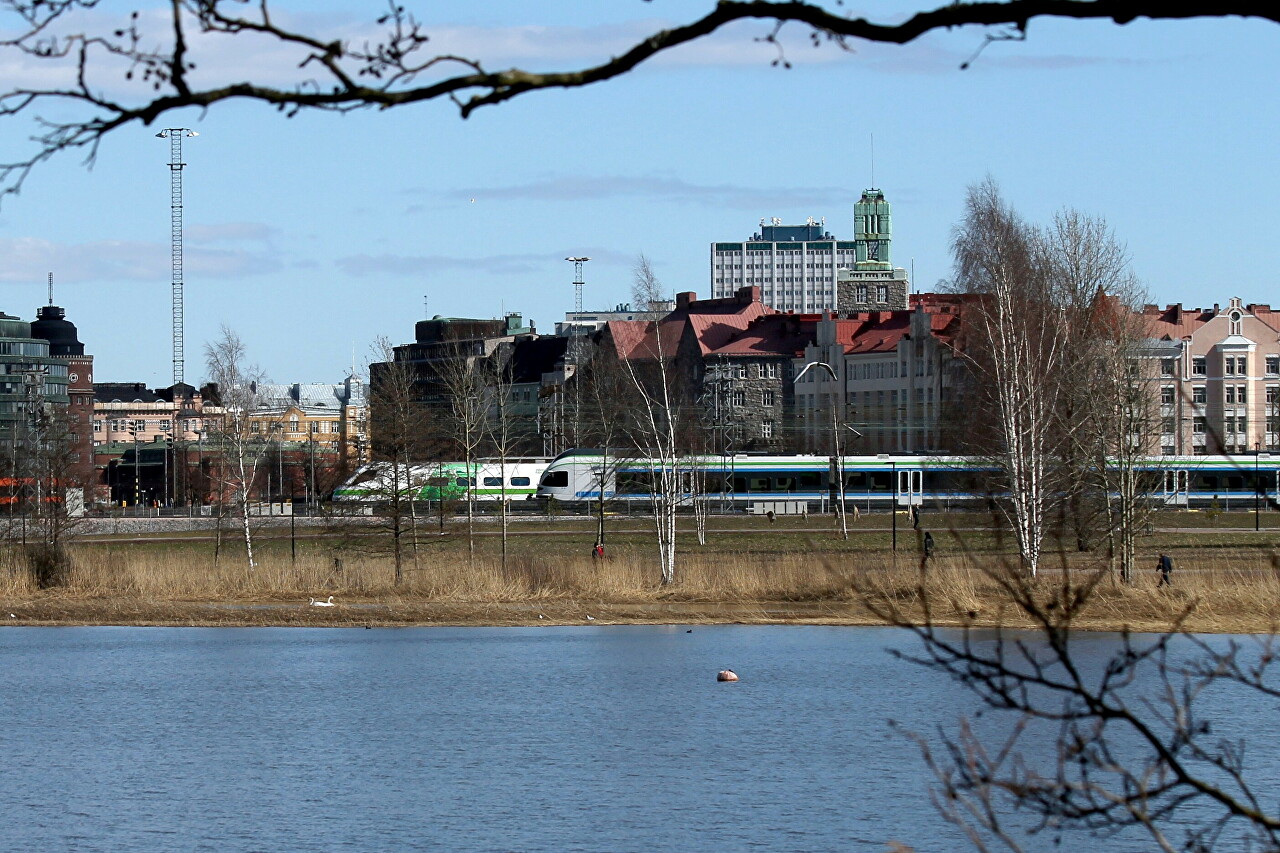 Finally, on the right, we can see a block of modern buildings built on the site of railway warehouses and Töölönlahti beach. 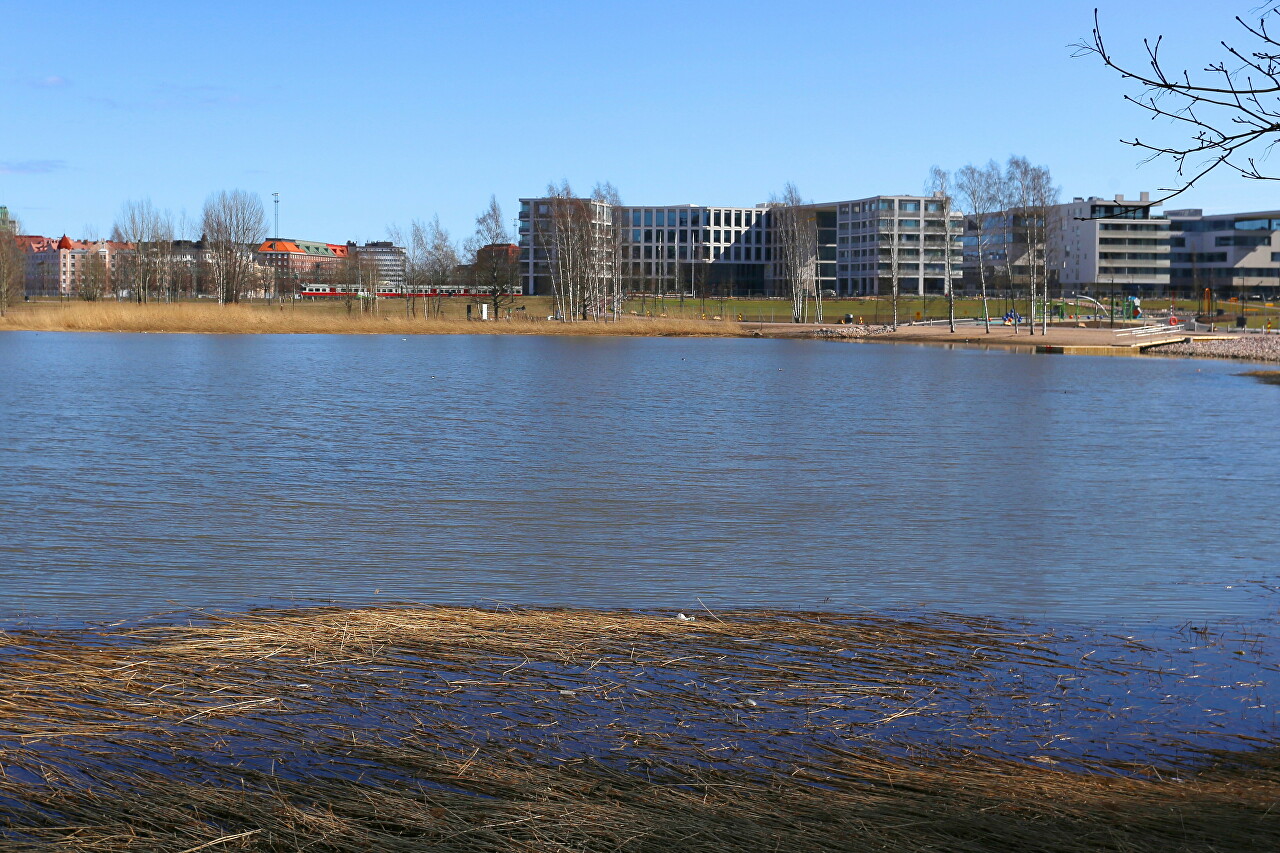