The next facility is the Levikhinsky mine, once the largest supplier of ore for the Kirovgrad copper plant, located 30 km from Kirovgrad. 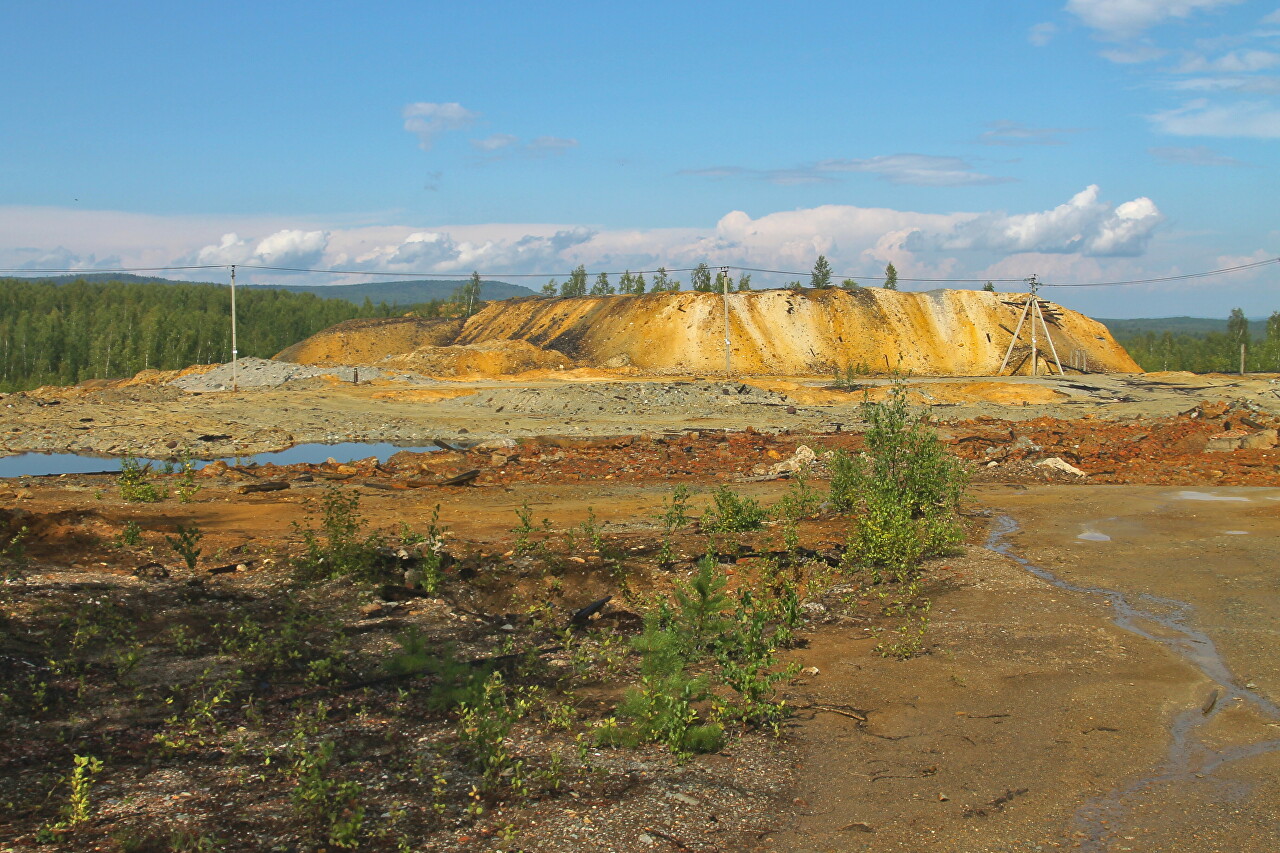 Here our guide was the former head of the mine Valery Nikolaevich Usachev. 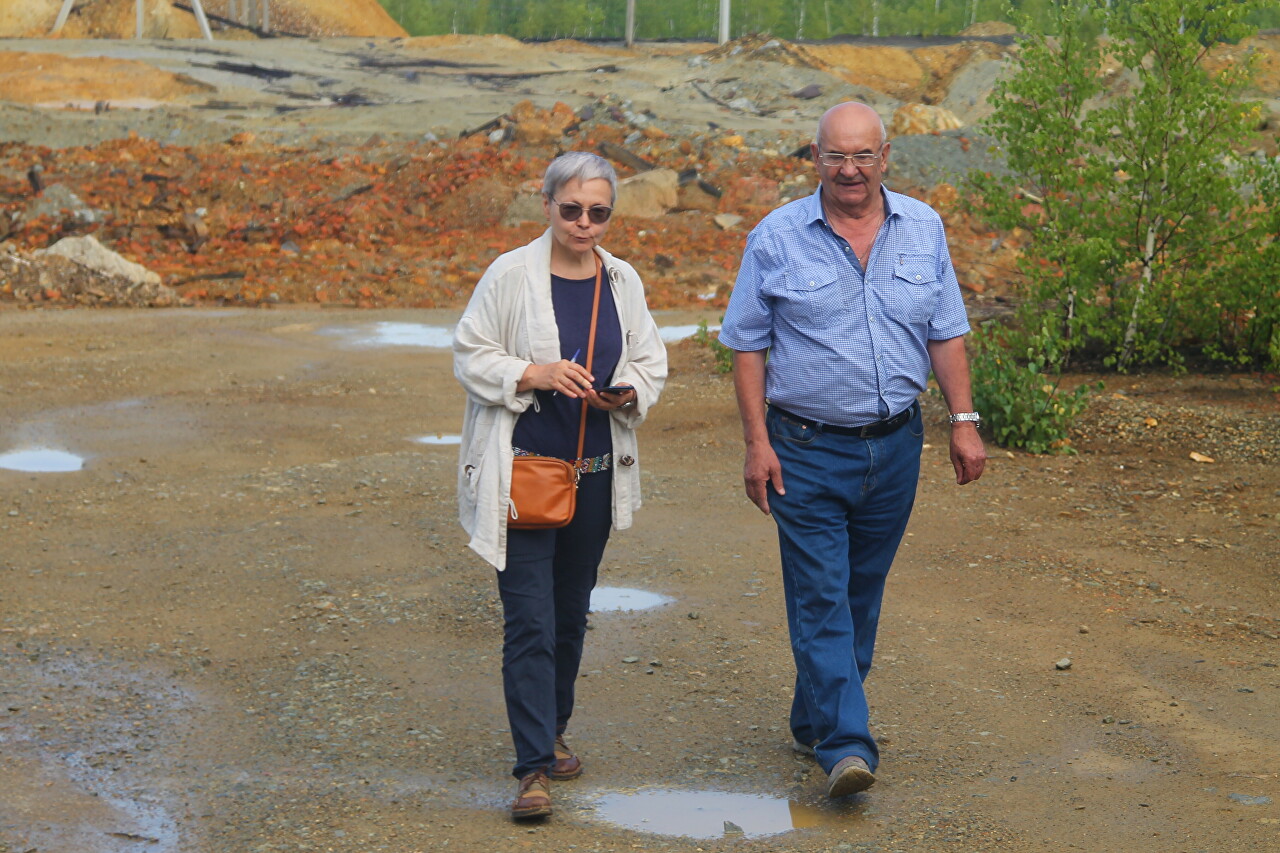 The native copper was discovered in peat bogs along the Levikha River in 1892, and three years later its open-pit mining began. In the tenth years of the 20th century, a copper-pyrite deposit was discovered, called Levikha-I, but its development did not arouse interest among the Management of Nizhny Tagil plants. In 1926, geologists of the Uralmed Trust found five copper lenses, which were named Levikha-II - Levikha VI, almost only with hand tools. In 1927, a more advanced method of electrical exploration was used to discover more six ore bodies, which gave rise to industrial development, which began in the same year. In a matter of months, a work settlement appeared here, and on October 1, 1927, the Levikha-II mine was put into operation. Open-pit mining has begun at the Levich-X sulfur-pyrrhic lens. In January 1928, the first hundreds of tons of ore were sent to the Kalatinsky copper Plant along the newly completed narrow-gauge line, but in the same year work was stopped due to the high zinc content. In 1933, the mine was completed to 180 meters, where the development of the Southern Lens, the largest in the field, began. Open-pit mining has started on the Levich-X lens. In 1933, the Levikha-XII mine was put into operation. 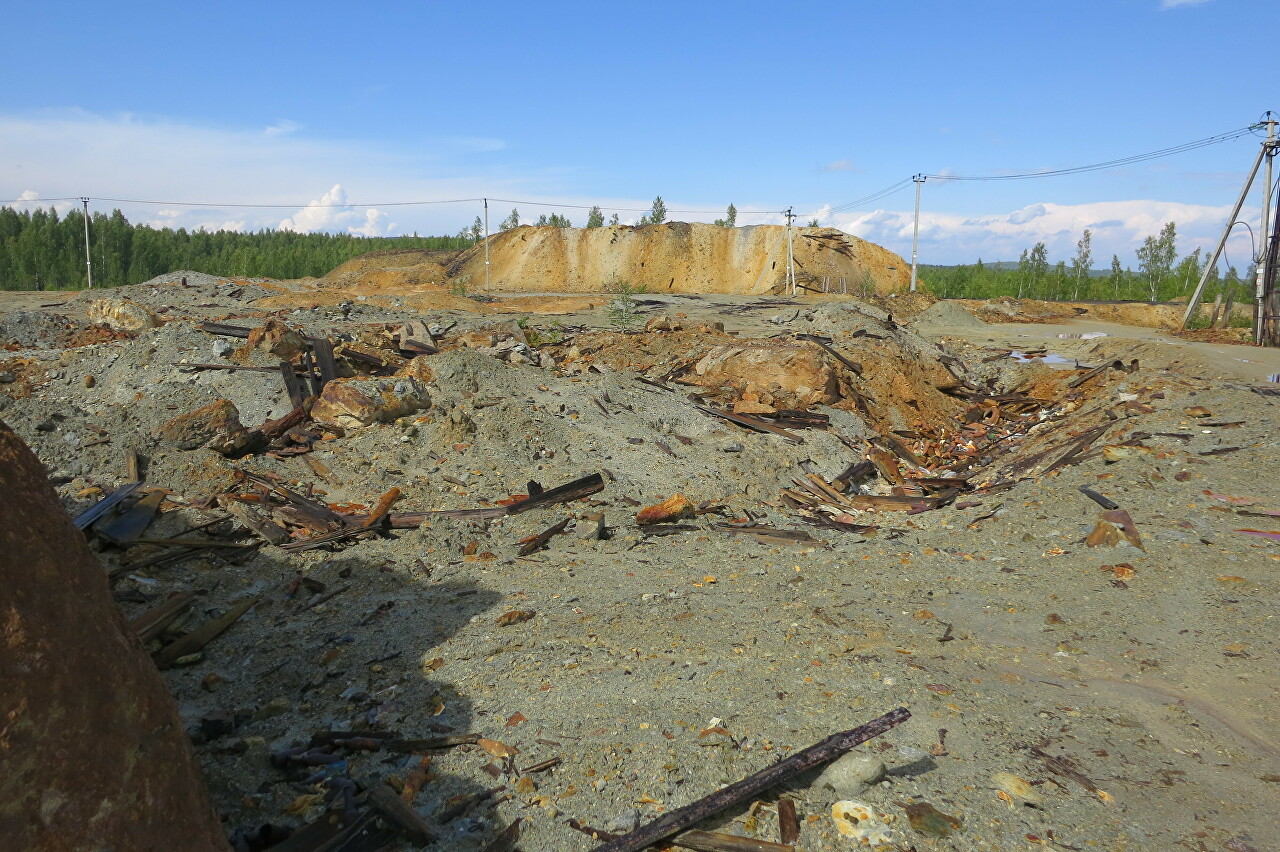 We go to the ore yard, from which one wall remains. 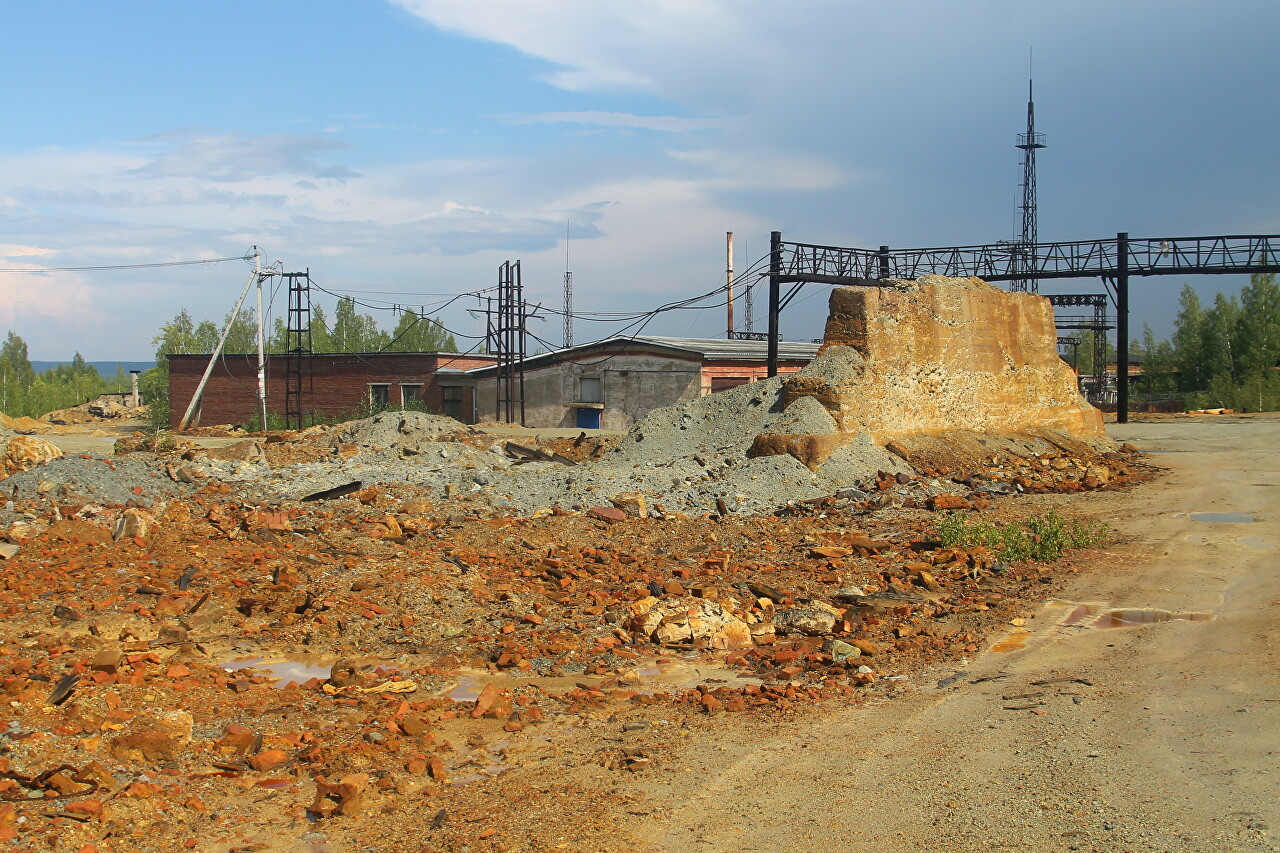 Brown stones are chunks of ore. Anatoly Alexandrovich looks for a suitable one. In 1996, the mine left the Kirovgrad Metallurgical Combine, however, independent life did not last long. As a result of the July snow storm, the mine was left without electricity for several days and the power generation was flooded. Acidic waters completely rendered useless most of the underground equipment and communications. In 2000, the Kamkabel company bought the mine, and production was partially restored, but it never became profitable. In 2003, the mine finally died. Now there is a stunning landscape in yellow-brown tones. The place is perfect for shooting fantastic alien landscapes or a disaster movie. There are puddles of acid everywhere. Mine waters have created a big environmental problem, they kill all living things and their discharge into the river requires neutralization. 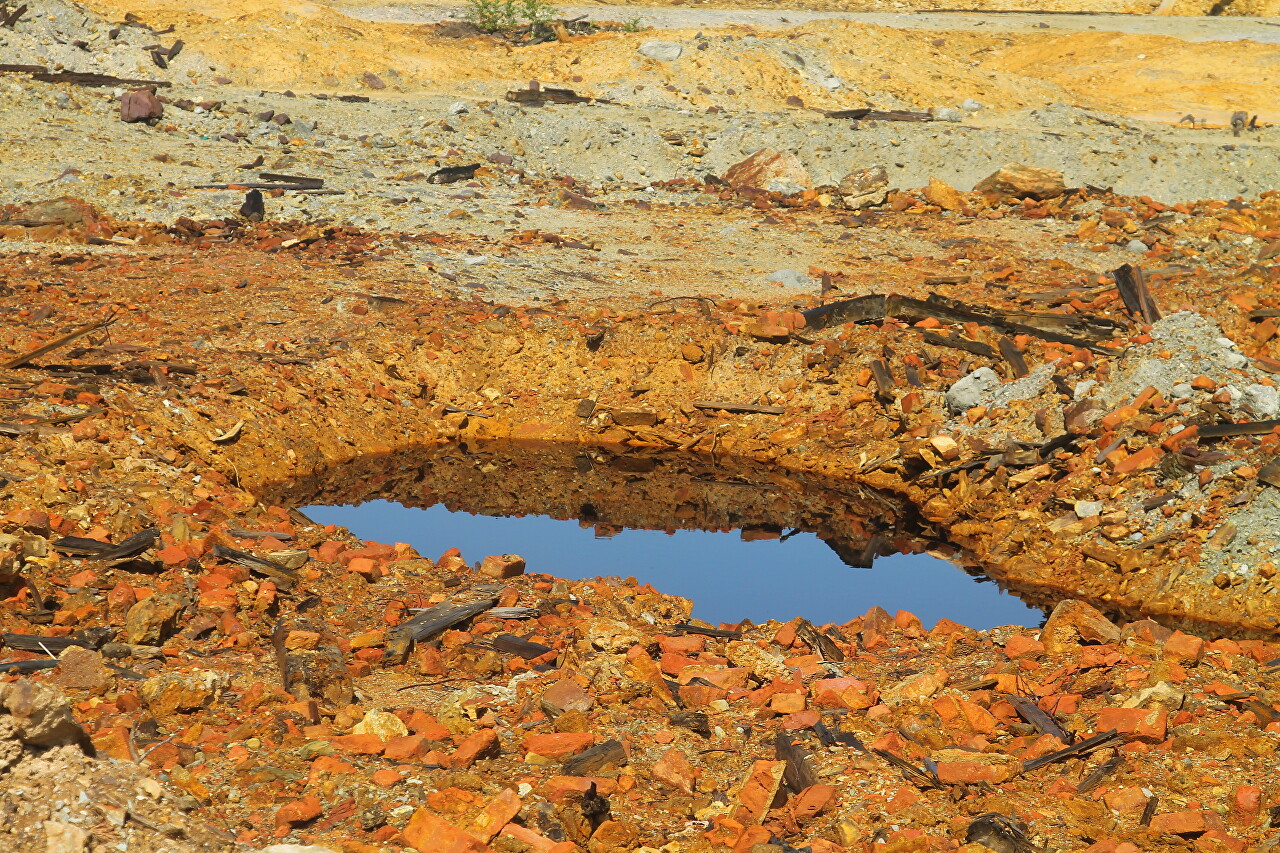 The remains of a wooden trestle on which the trolleys were moving stick out of the dump. In the distance, you can see another small trash can. The shaft of the mine is blocked, but it is surrounded by a fence, the shrinkage of the soil can continue for years, and at any time a deep hole can form in place of this pile. 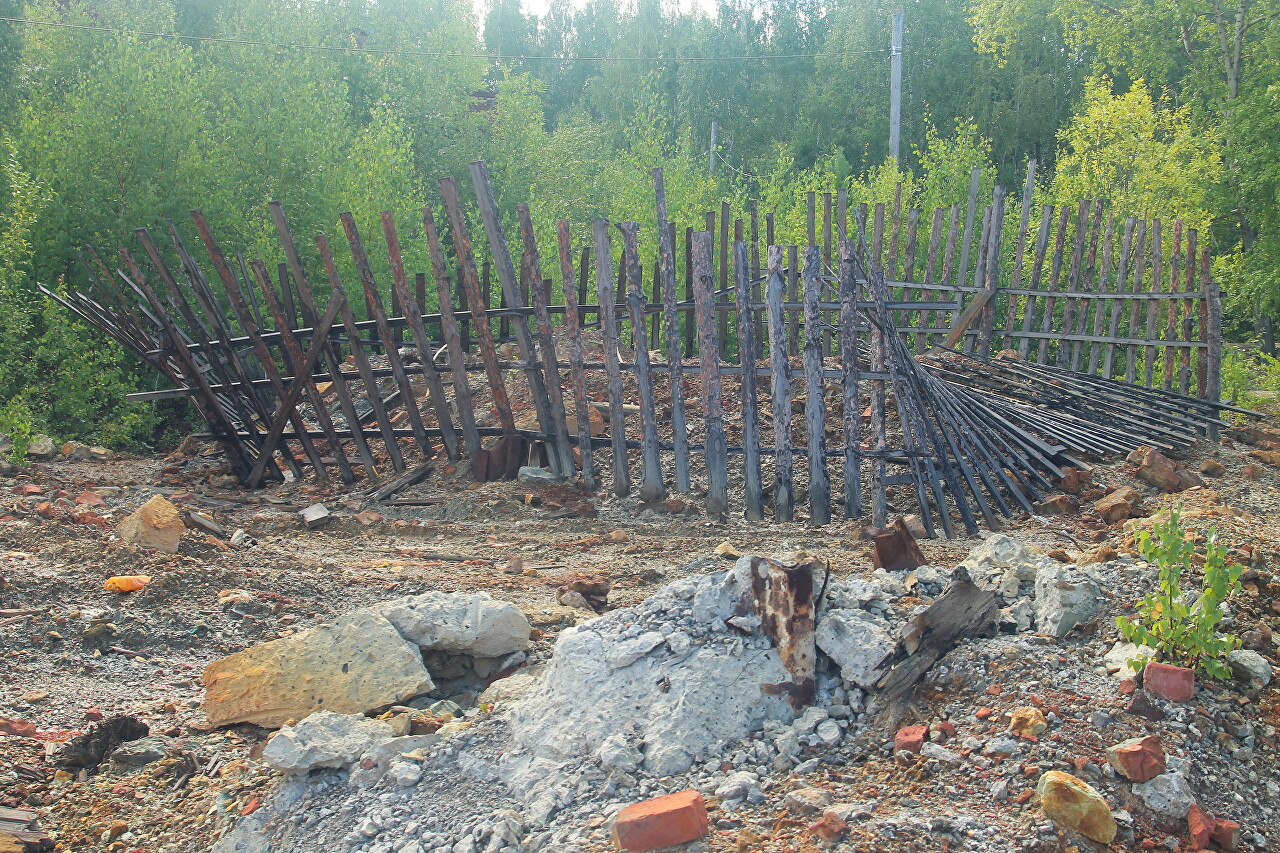 There are still some remains of underground structures near the road. 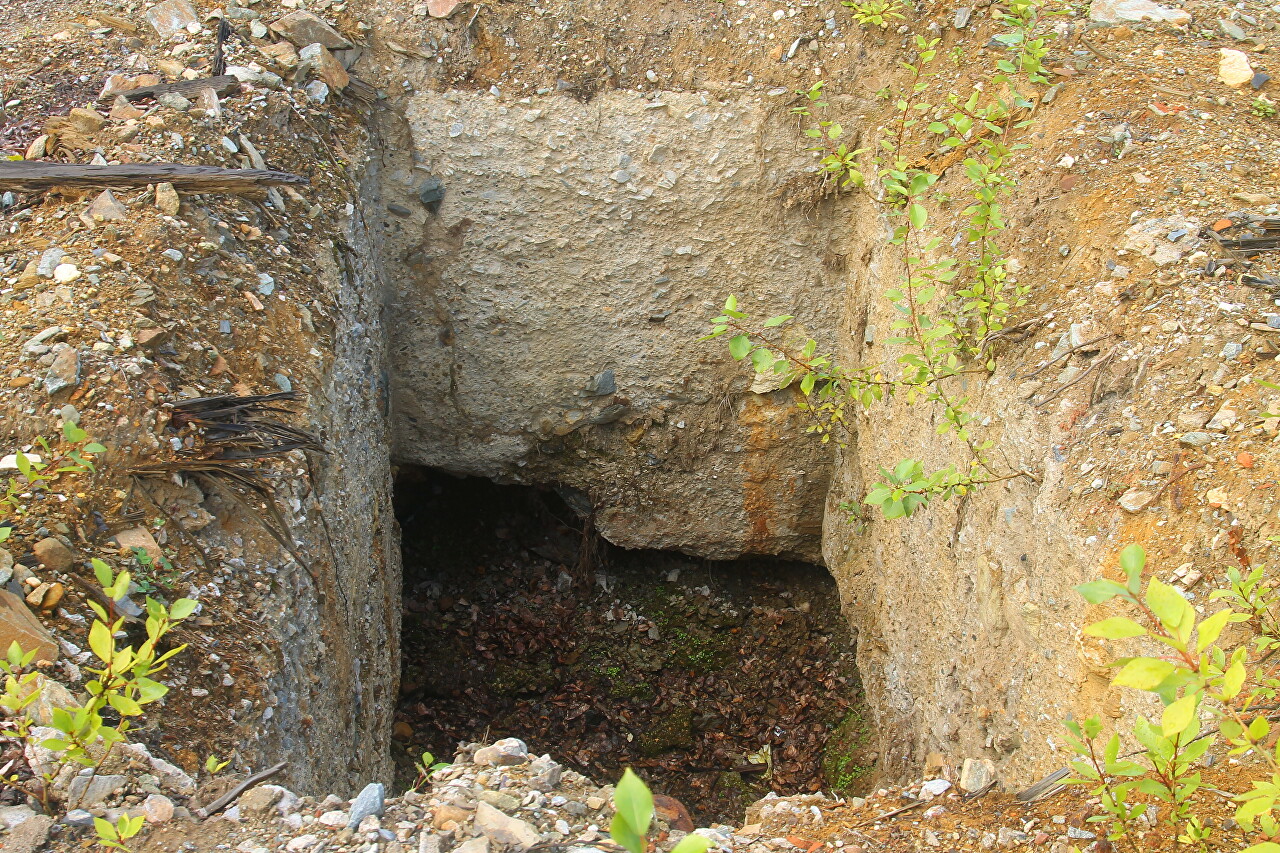 The wreckage of a miner's helmet is lying among the pieces of rock. From the huge mine, only the electrical substation remained in operation. Now there are several sawmills on the territory. 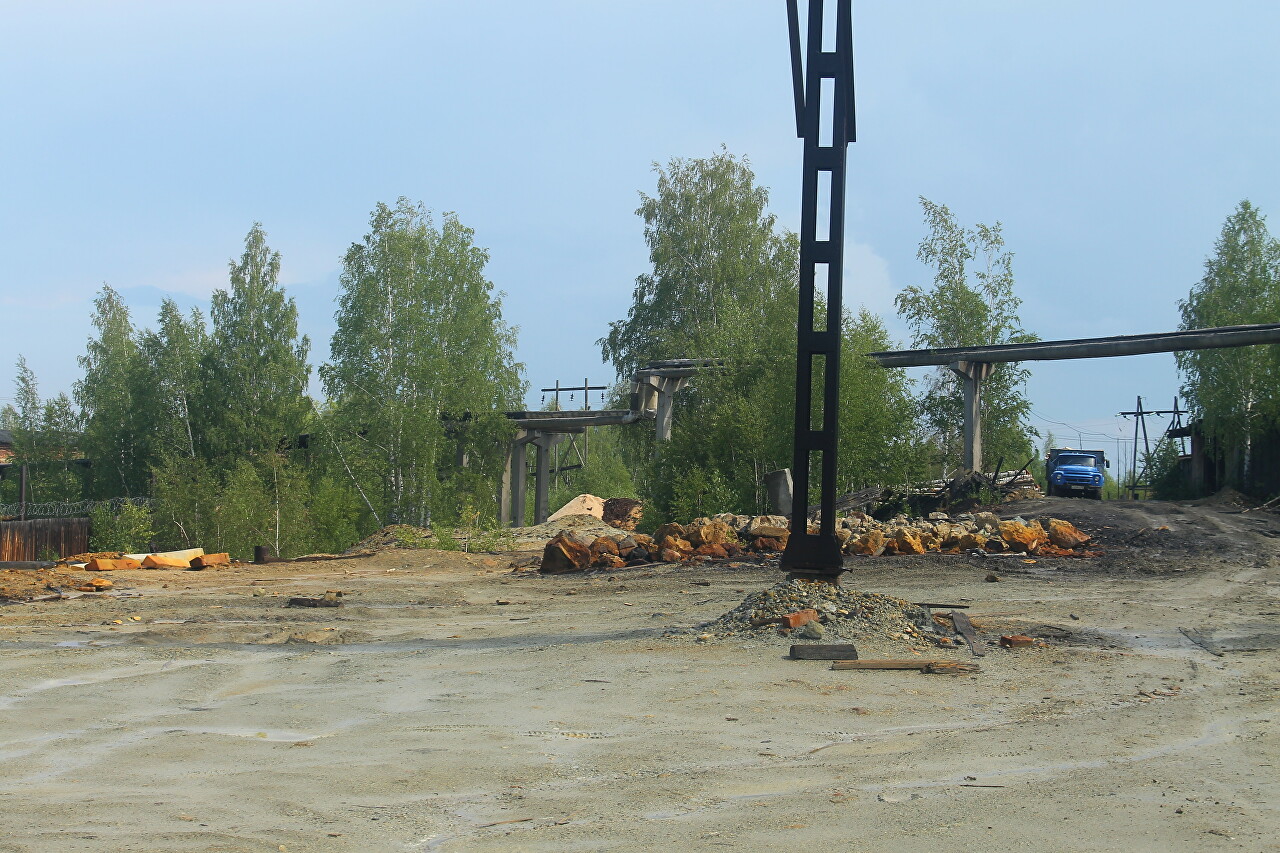 Beyond the dumps, you can see the 501-meter-high Yuriev Kamen Mountain, known for its picturesque cliffs on the eastern slope and excellent views from the top. The village of Karpushikha. There was also a mine here, built in 1914. Two mines, Severnaya and Vasilich, had horizons from 15 to 160 meters. The ore reserves lasted until 1954. 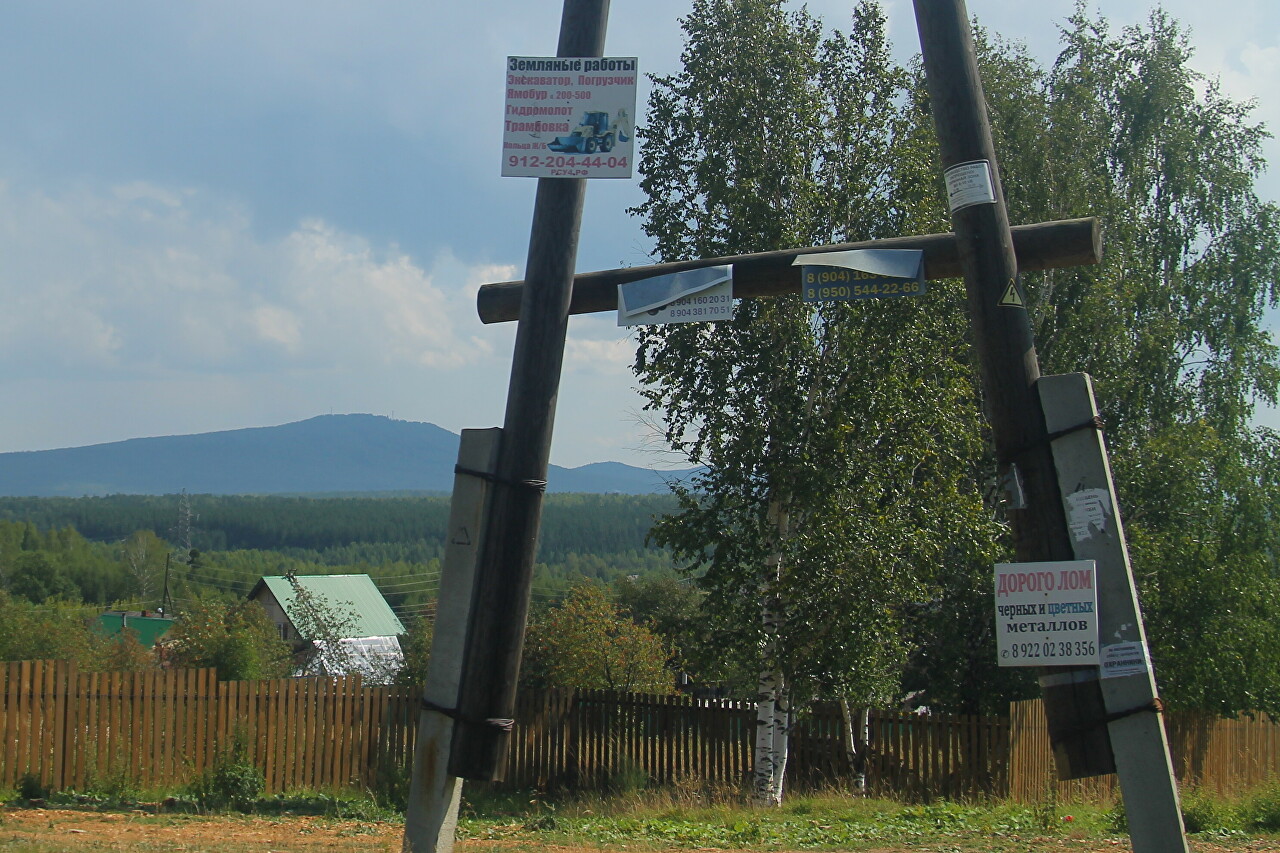 After the development of the deposit, residents of the village worked at the Lomovsky mine, as well as a base of a mountain rescue team with a training complex was created here. Now some of the houses are abandoned, most of the others are occupied by summer residents. The village is famous for its beautiful surrounding landscape and a spring with the purest water. 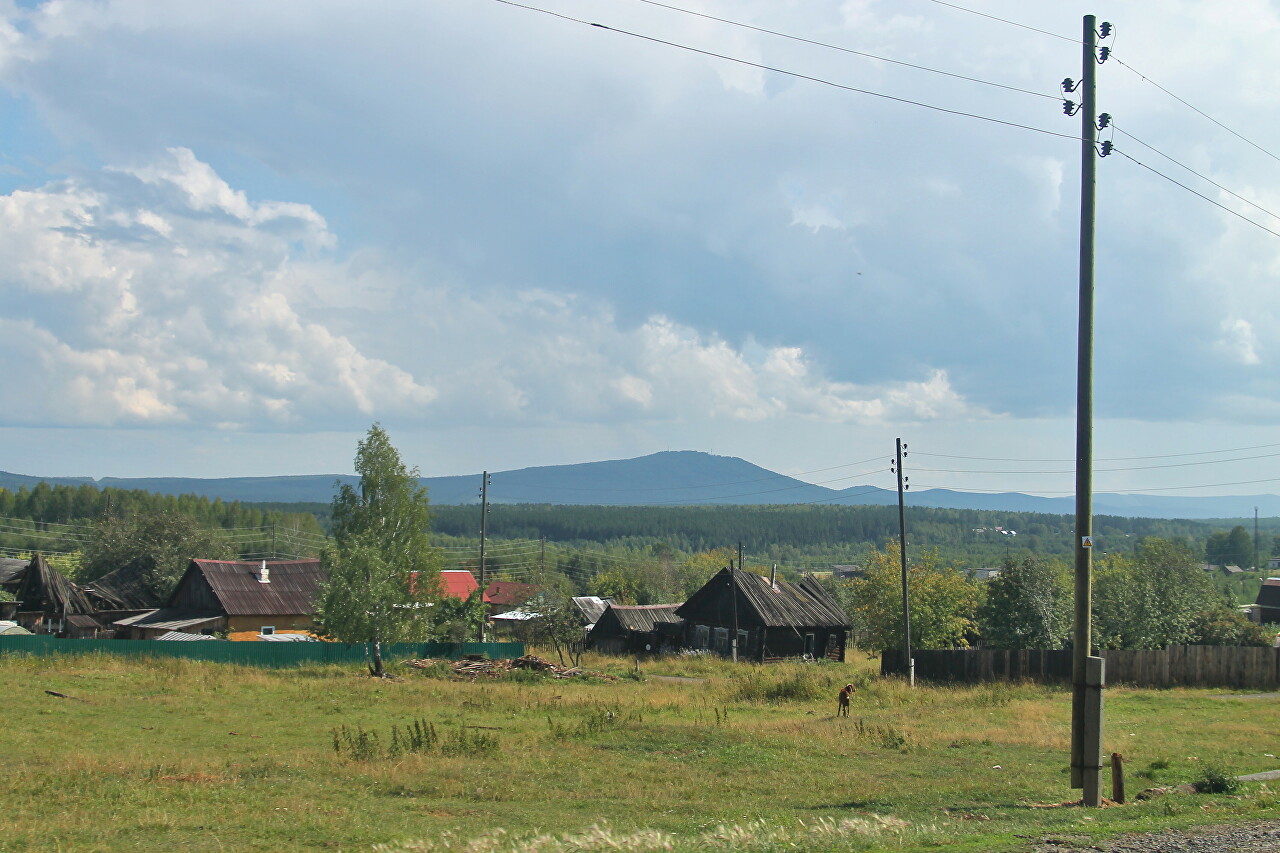 Finally, we went to the Lomovsky mine for samples. It was opened in 1950, the mine was called "Victory" and was passed to a depth of 315 meters. Later, the "Auxiliary" shaft was passed to a depth of 270 meters. A branch of the Kirovgrad-Levikha narrow-gauge railway was used for ore delivery. 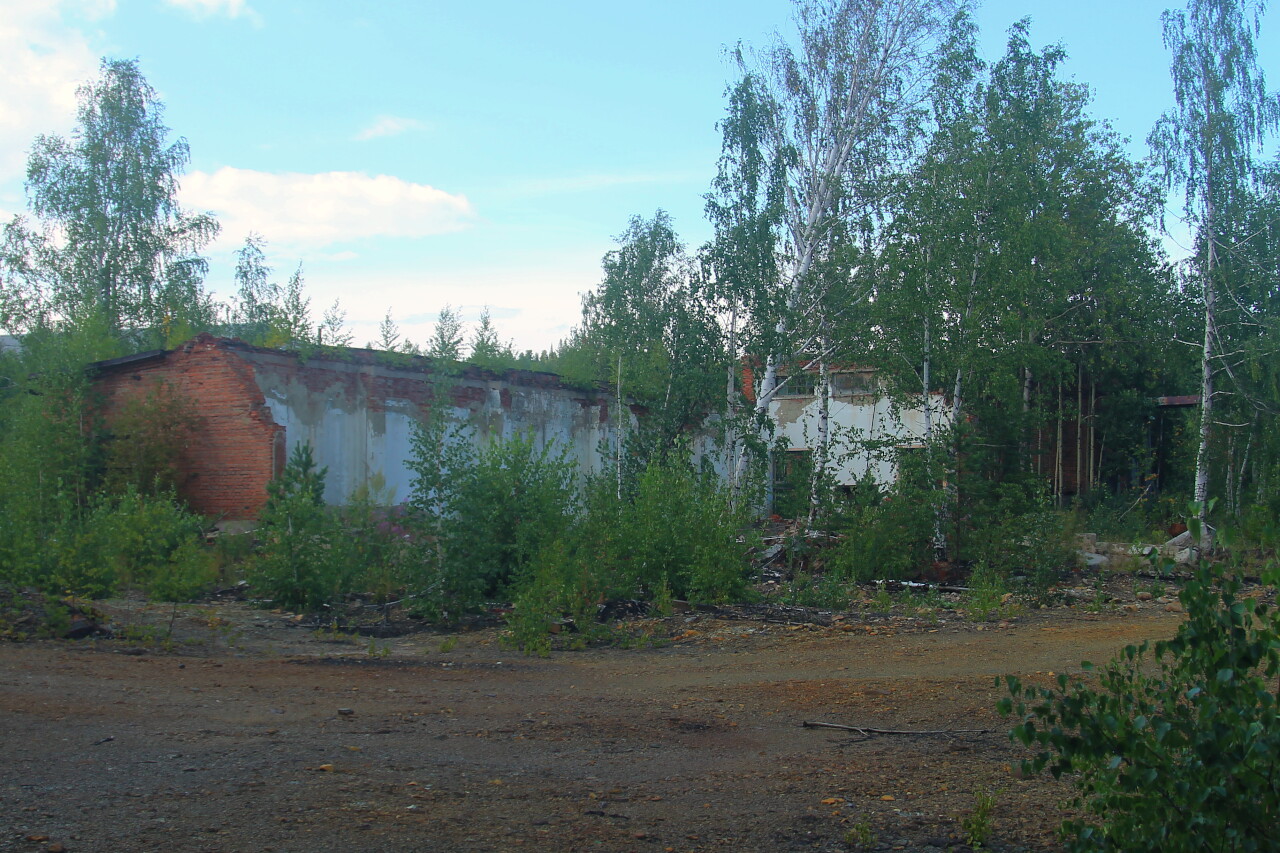 Empty rock was fed by trolleys along a wooden trestle to the dump, which eventually reached a considerable height. 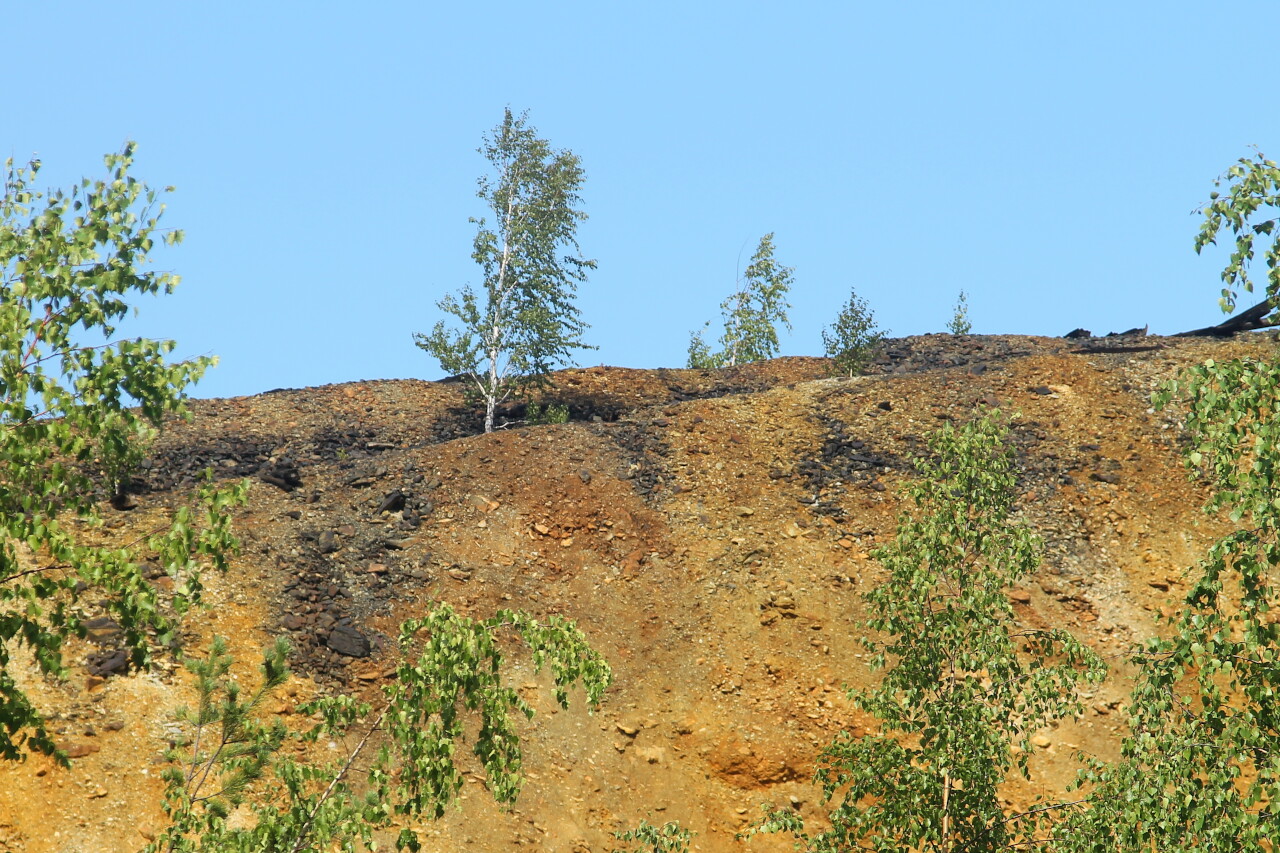 The mine was closed in ' 93 and most of the buildings are now just ruins. A few buildings are still in good condition, and they house a porous aluminum manufacturing plant that has settled here since the mine closed. 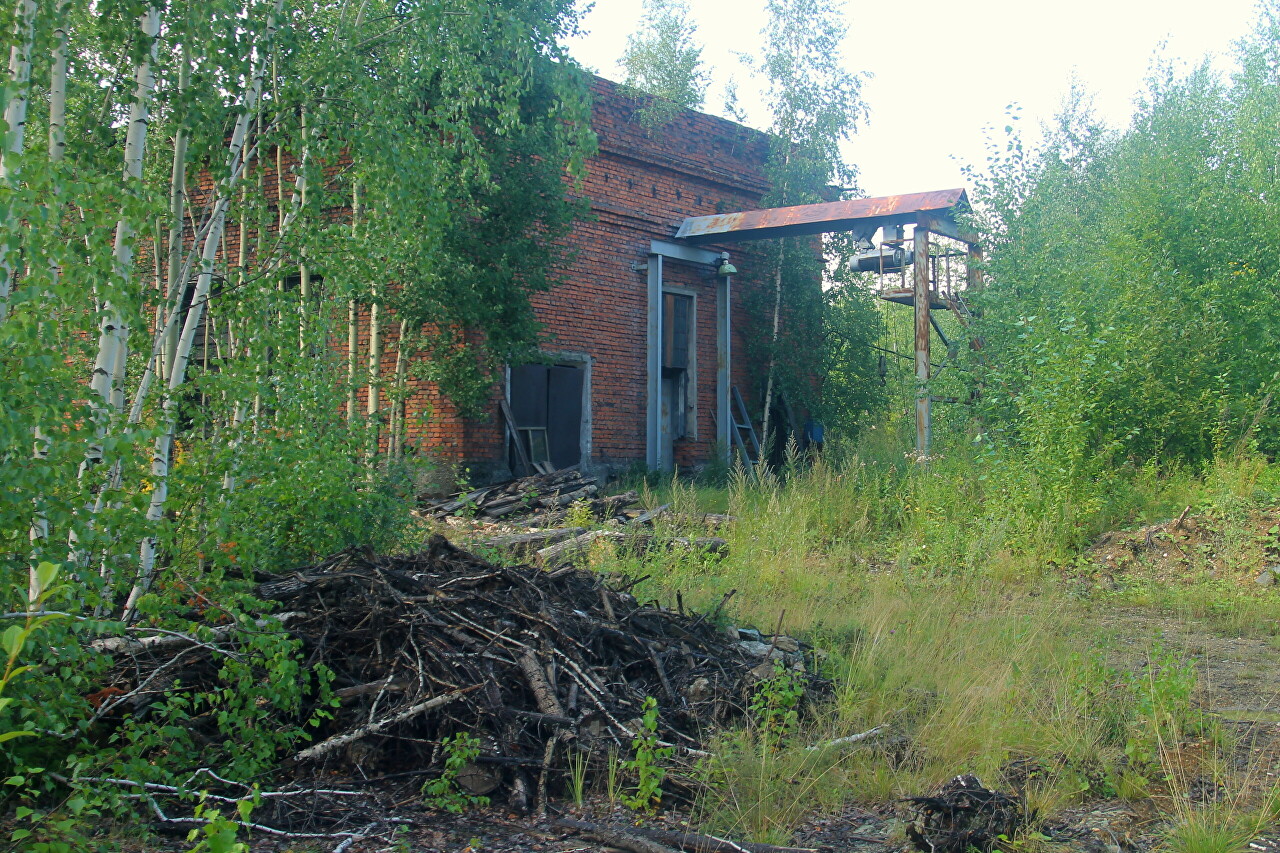 We were not allowed to go any further by dogs that appeared from nowhere. However, they behaved correctly, only barked, did not try to attack, and did not approach close, and when we moved away a little, they lost interest in us. 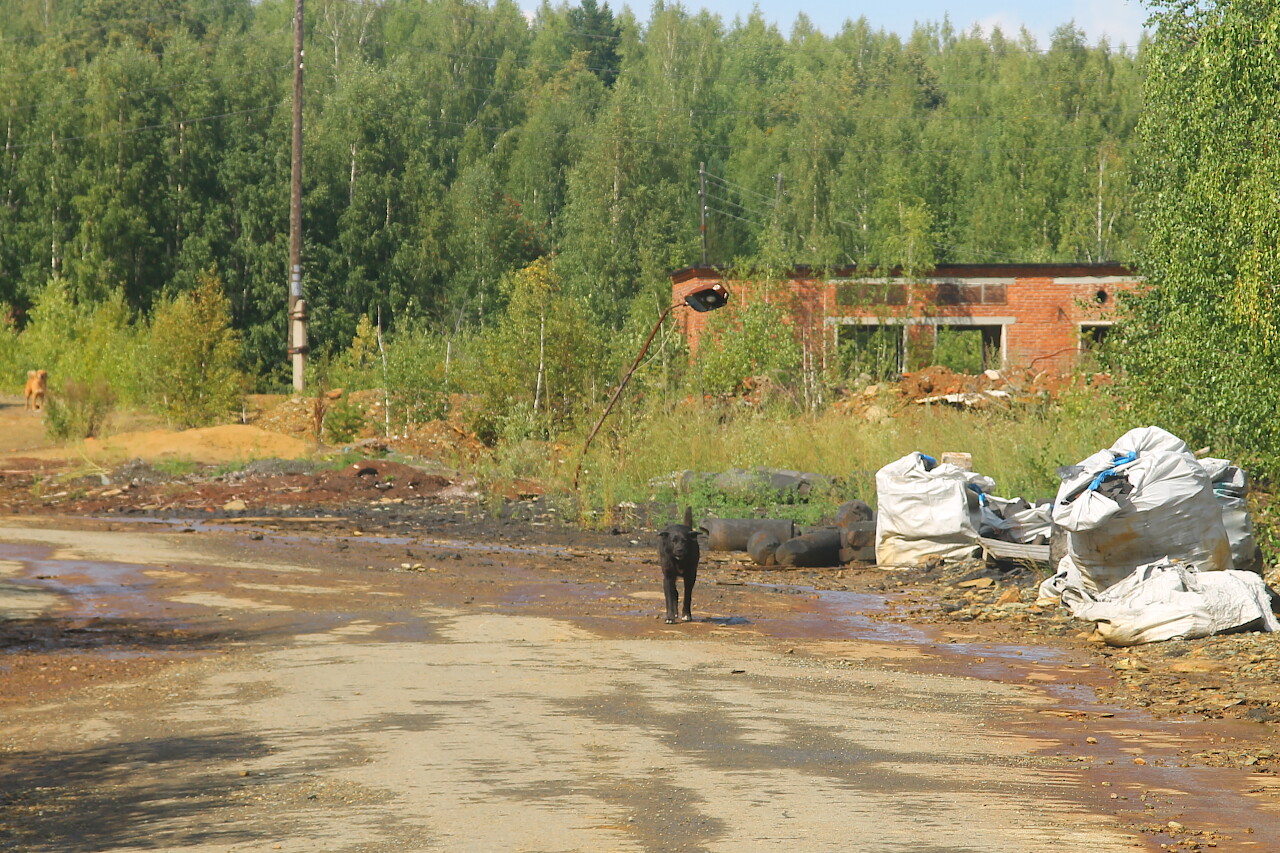 After turning to Lomovka, you can enjoy a wonderful view of Mount Yezhovaya (or Yezhevaya), one of the highest in the area, its height is 556 meters. The western slope of the mountain is the steepest, it is cut by the clearings of the ski slopes of the most famous ski complex in the Sverdlovsk region. 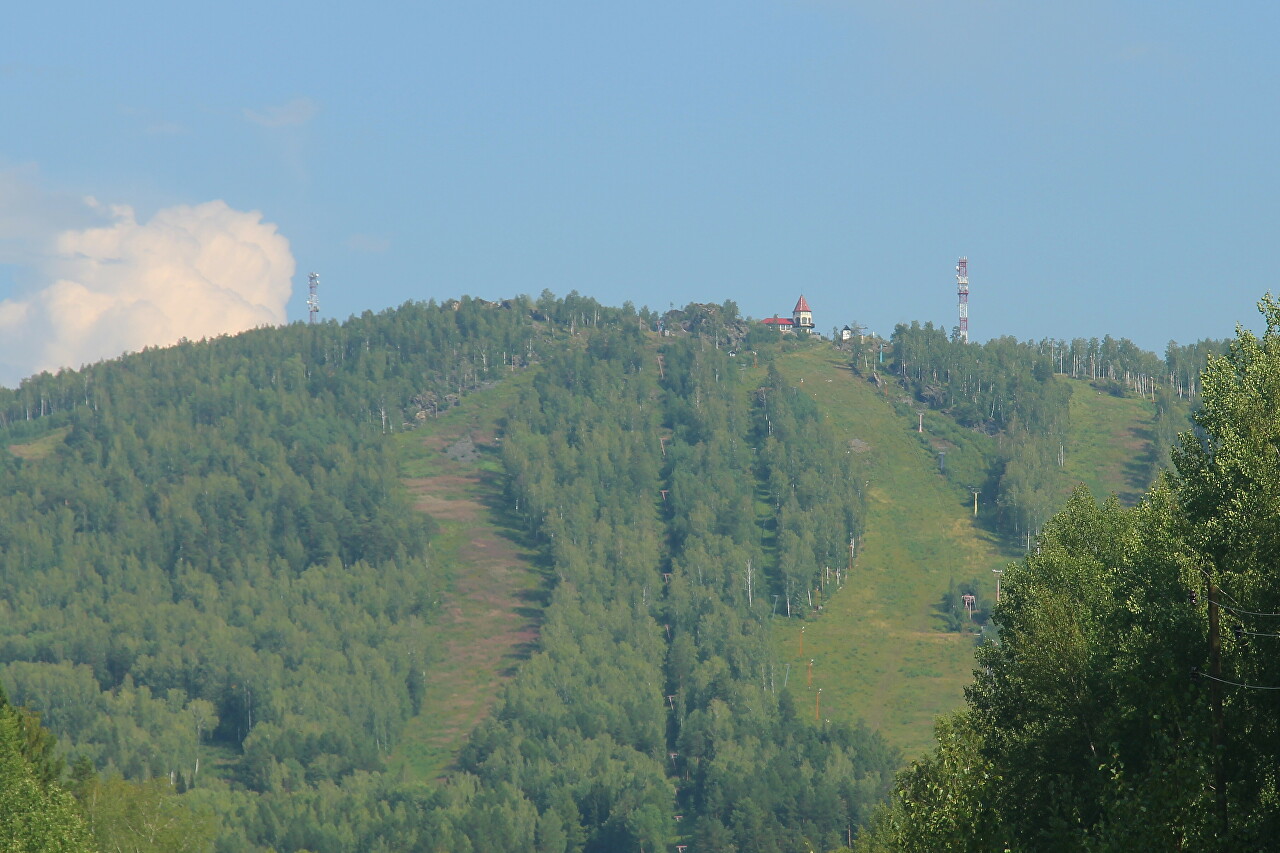