Bus from the Railway Station to Taormina

When I decided to come to Taormina by train, I was puzzled by the question: how do I get from the Taormina-Giardini railway station, located on the seashore, to the city, which is a couple of hundred meters higher? Searching for an answer on the Internet gave a disappointing result - in the Russian-speaking segment, numerous "experts" gave the only valuable advice - to take a taxi. On foreign websites, a hired car was also a priority, but occasionally a bus that runs "a few times a day"was mentioned. In some places, it was reported that there was a scenic Hiking trail, but there was a message that the trail was damaged by a landslide just a month ago and closed. And even if this route was available, I didn't want to go uphill with a backpack in the heat. My budget did not provide for the use of taxis in principle, so I continued my search, and found a schedule with intervals of about two hours, and I was quite satisfied with it. I could spend the time between the train and the bus with advantage-a walk through the town of Giardini, on the outskirts of which there is a station. However, everything turned out to be much easier-right at the exit of the station building, I found a bus stop, with a schedule that could not but please-buses ran every 15-20 minutes. In addition to Taormina from the train station there are flights to Letojanni, they run every two hours. The company of German pensioners who were traveling with me in the same car (as I understood, they were from a cruise ship that stopped in Messina), I think, also did not have a clear idea of local transport, so when they saw this sign, they expressed great joy. Apparently, not too believing their happiness, one of the grandmothers strongly asked me to confirm whether the bus to Taormina will come in 5 minutes. Well, I was in no hurry, the time of settlement in the pension began only in two hours, so I went to the planned acquaintance with the town of Giardini Naxos. 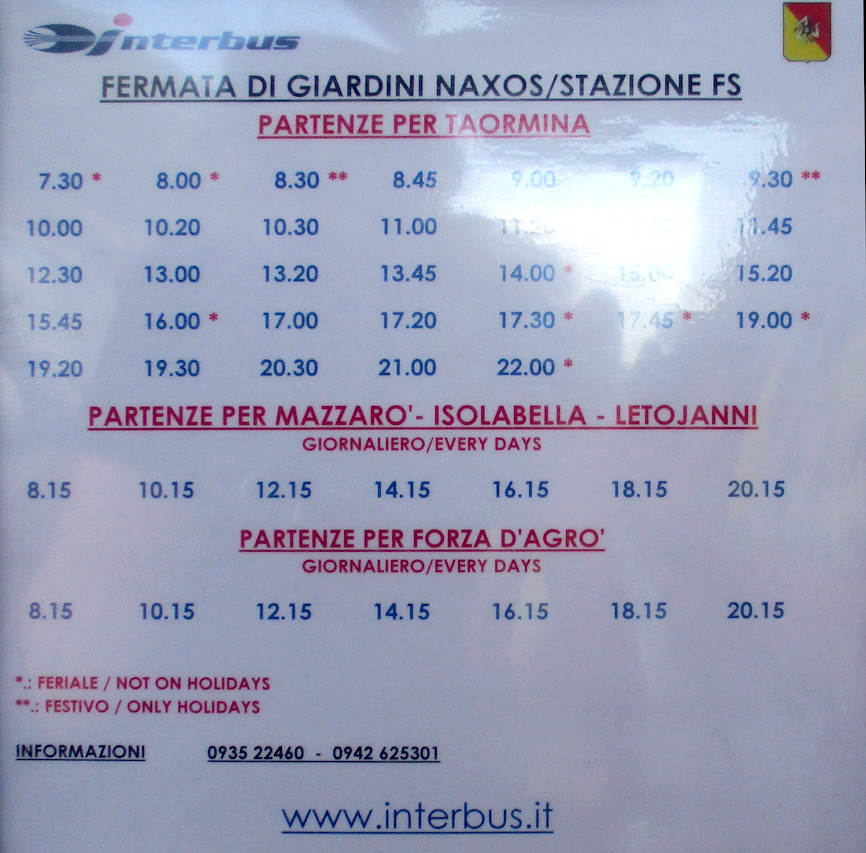 There was an offer under the schedule recommending that I buy a ticket at a cafe located in the station building, which I did when I returned to the station after a walk through Giardini, and meanwhile the intercity bus, Catania-Taormina, which has an official stop here, came to the stop. It turned out that you can leave on it and even on the same ticket - the routes belong to the same company Interbus. However, as it turned out, the lack of a ticket is not a hindrance, it can be buy from the driver. While I was putting my backpack in the trunk, a local bus pulled up. Schedule of intercity buses through the station Taormina-Giardini. 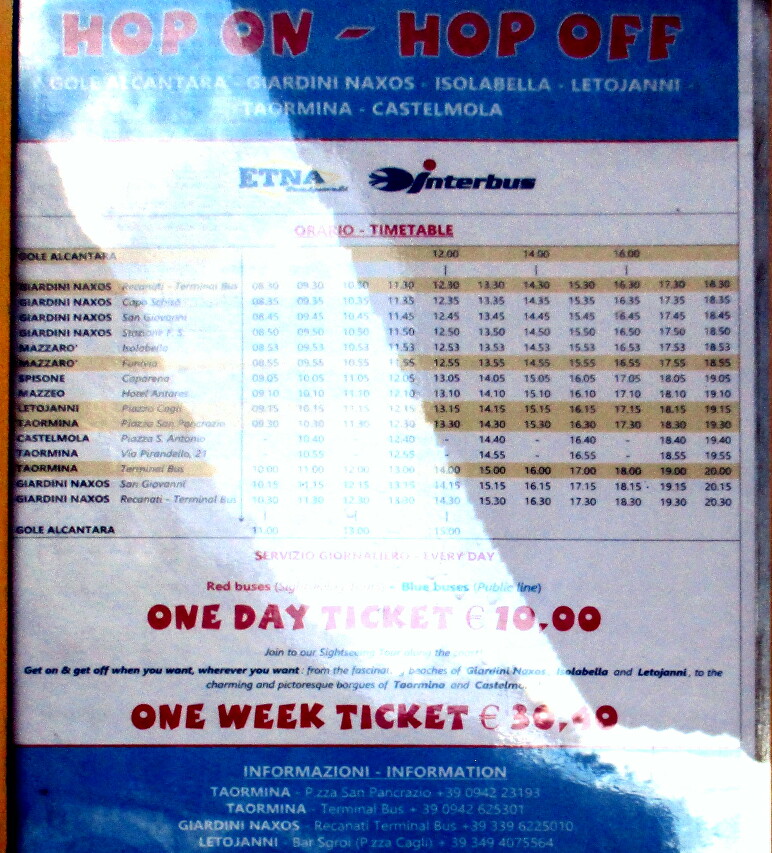 Another schedule is the Hop on - Hop off tourist route. Red buses run along the route Gole Alcantara (natural Park) - Giardini-Naxos-Isolabella-letoyanni-Taormina - Castelmola. A ticket for one day costs 10 euros, for a week 30-very inexpensive for sightseeing buses in major cities. 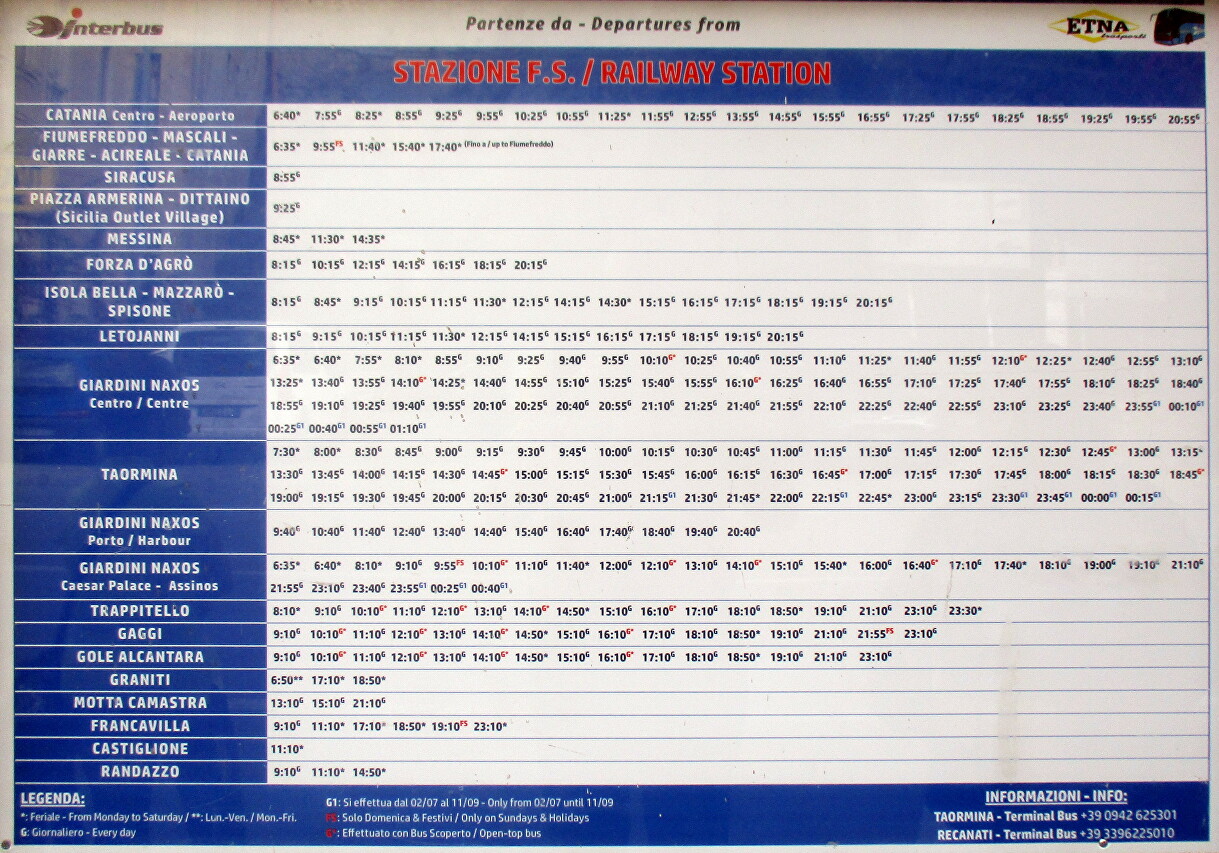 Sitting in the bus, I took a camera at the ready, as the road to Taormina promised interesting views. 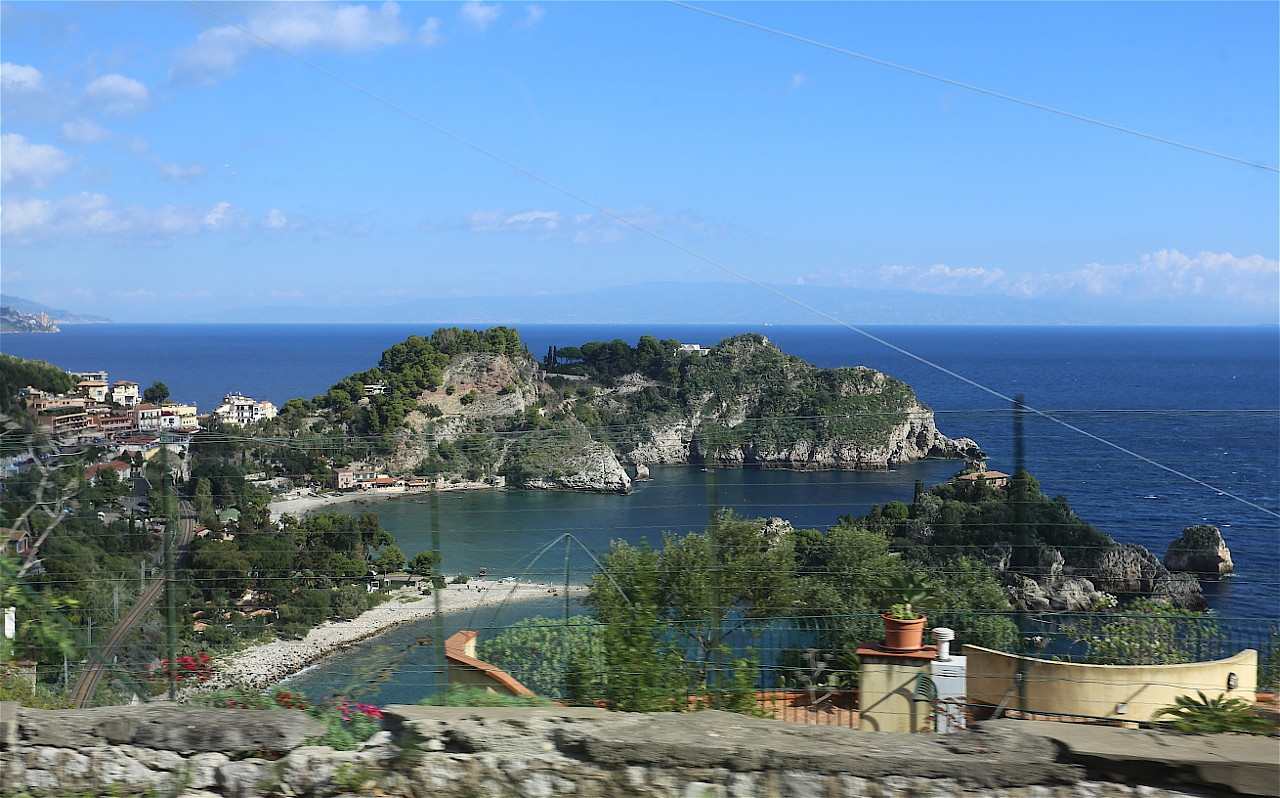 My expectations were not deceived - a couple of turns opened the Bay of Isola Bella, framed by two rocky capes. This is the beach area of Taormina, connected to the city by cable car. 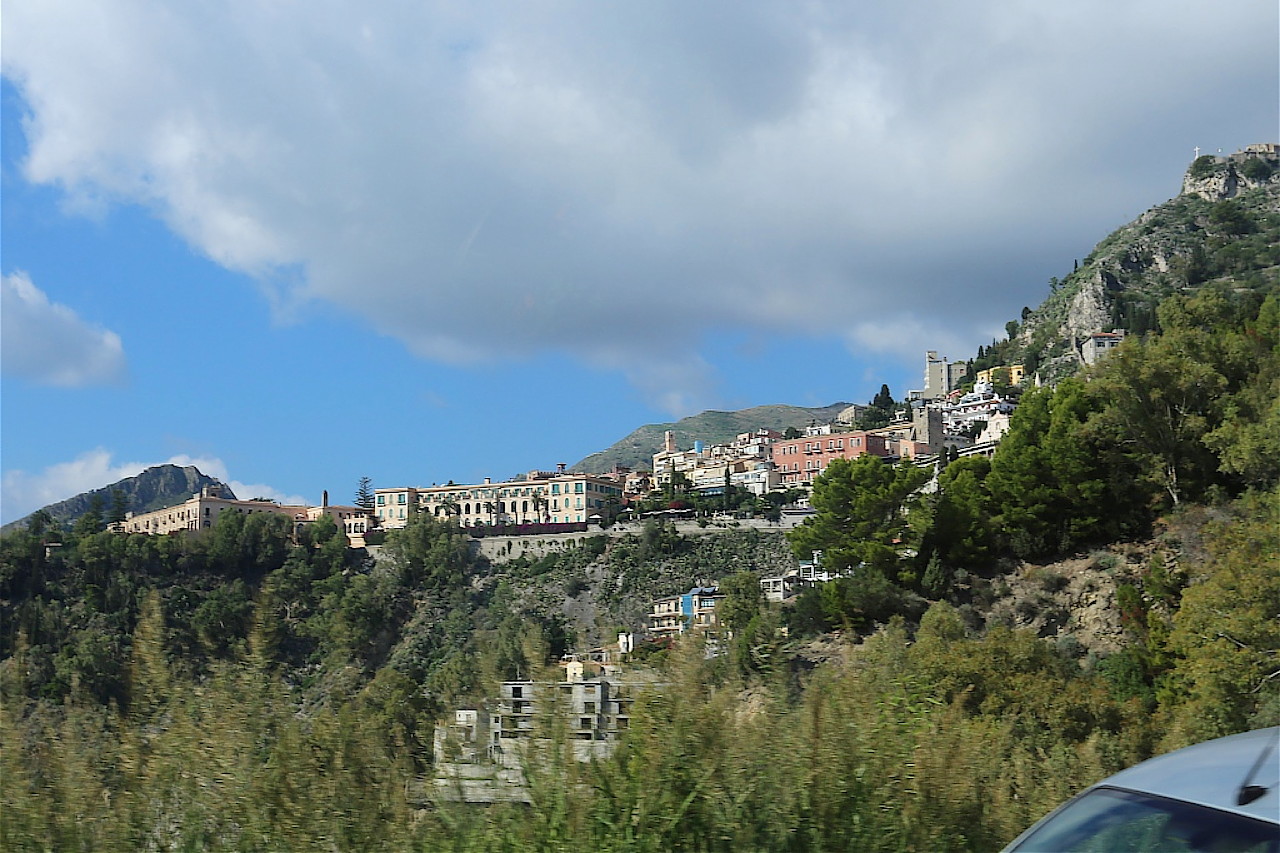 The via Luigi Pirandello leads to the city, curving in all directions an unthinkable number of times. 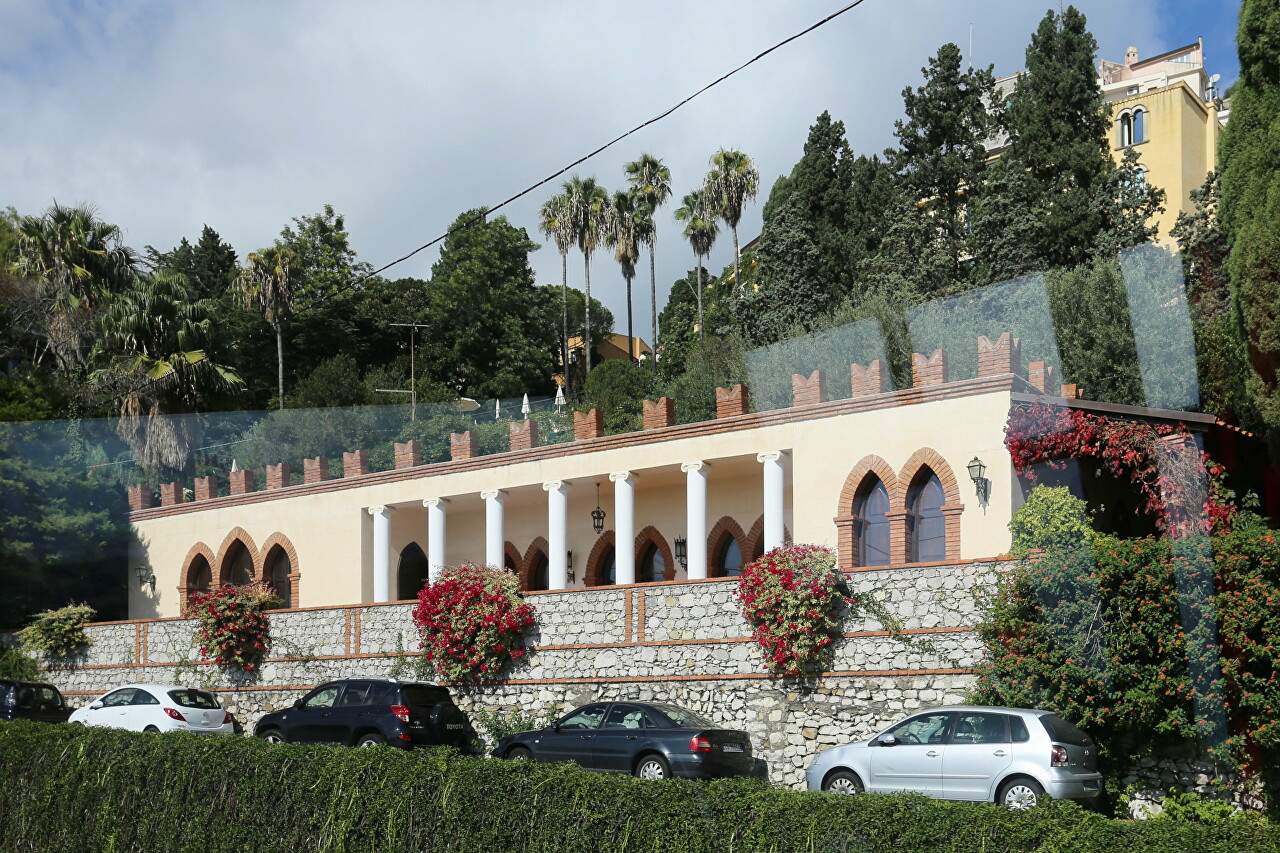 After we had climbed a hundred meters vertically, the arc of the Gulf of Giardini-Naxos opened to the southwest. 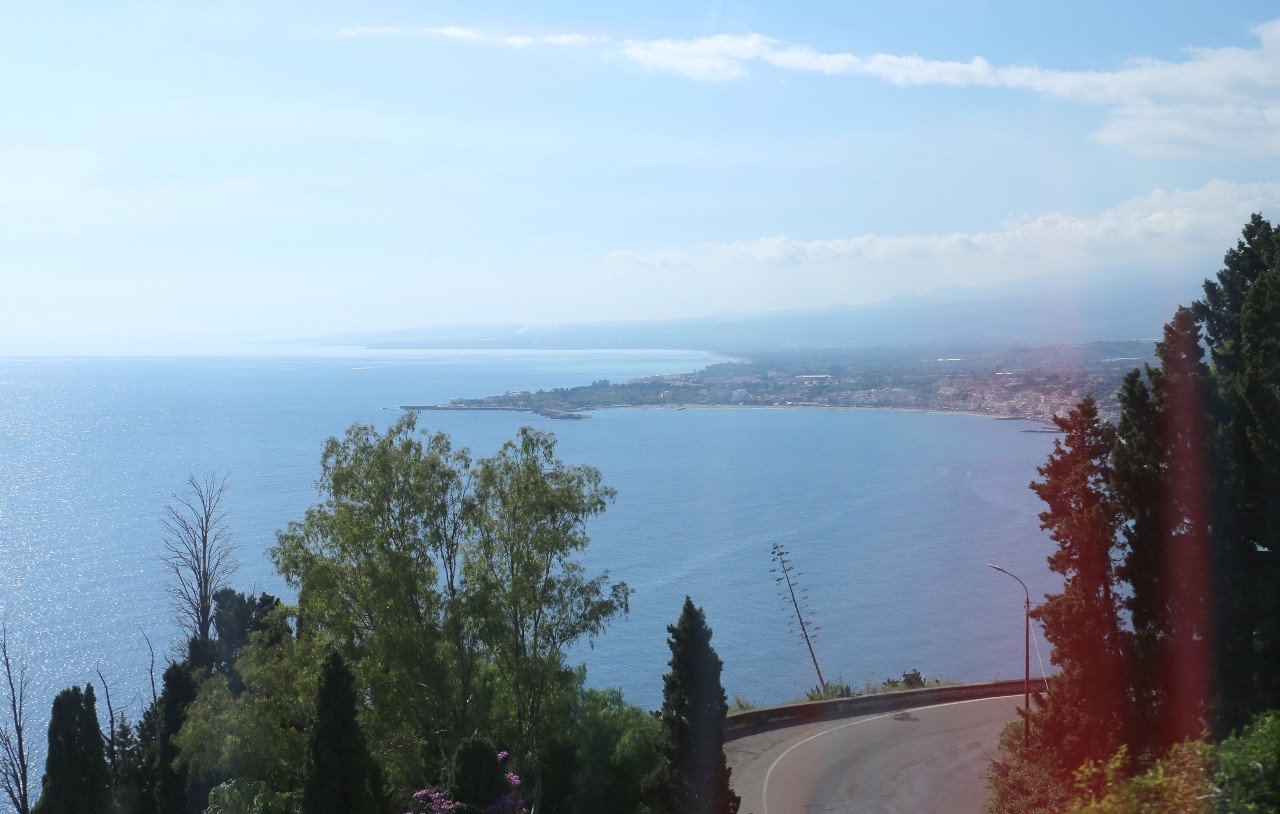 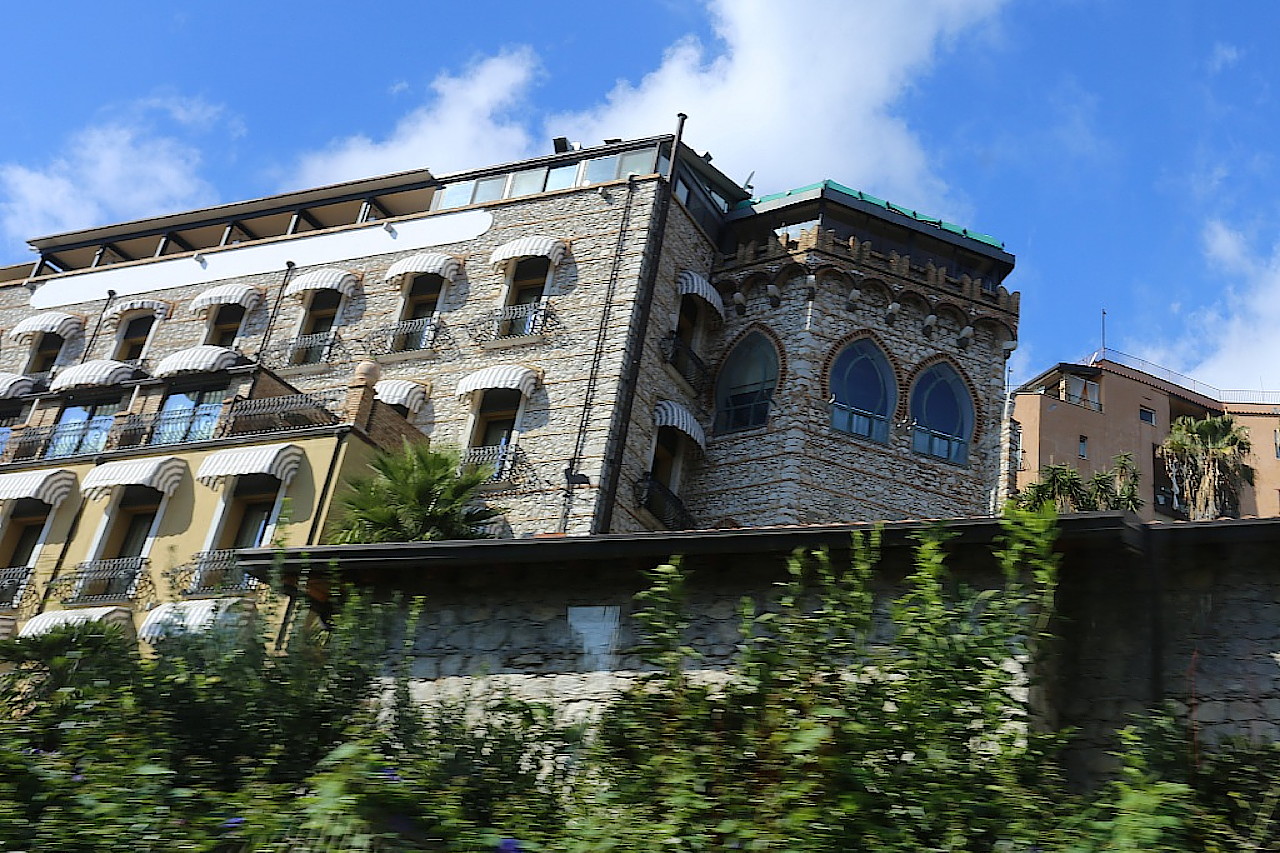 After driving about seven kilometers along a breathtaking mountain road, we arrived at the" bus terminal " of Taormina, which turned out to be just an open Parking lot with a ticket booth and a couple of shops under a small canopy. To reach Corso Umberto, the main street of The city and the corvayo Palace, where the tourist information center is located, you need to go about half a kilometer along the same Via Luigi Pirandello. 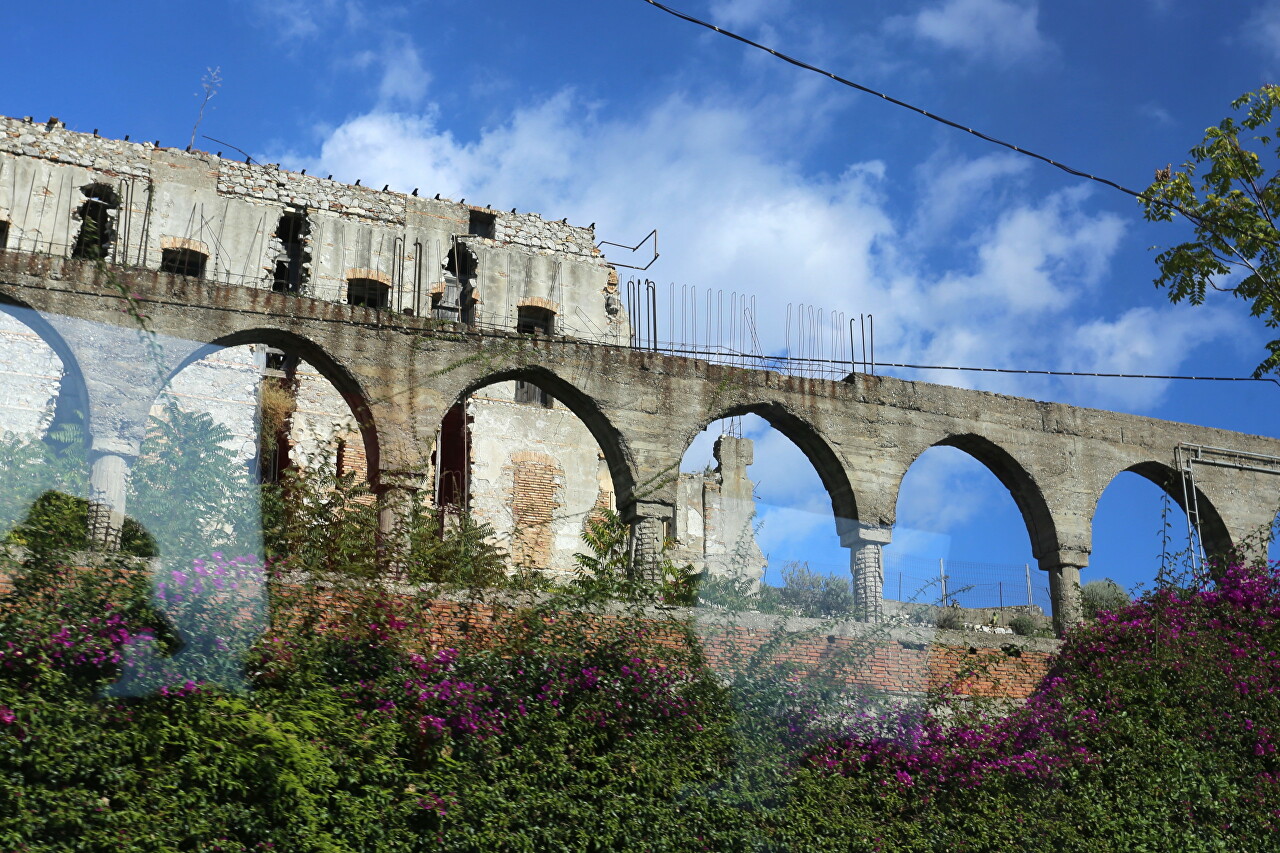