In the summer of 1953, Angelo Iannuso and Antonina Lucia Giusto were expecting their first child in the home of a young couple, but Antonina's pregnancy was complicated and her vision began to deteriorate. On the night of August 29, Antonina completely stopped seeing, but at 8:30 am, her vision suddenly returned and she saw tears oozing from the eyes of the figurine of Our Lady, who was at the head of the bed. The plaster half-bust, covered with enamel, was presented by the spouse on the wedding day. The happy couple informed their relatives and friends about this, and the news quickly spread throughout Syracuse, and their home became a place of mass pilgrimage. Lacrimation continued until September 1 and was repeated about 60 times, while six more cases of healing pilgrims from various ailments were lured. The study of the miracle was thoroughly approached, an analysis of the liquid was carried out, which established that the chemical composition corresponds to a human tear. In addition, the phenomenon was captured on film. On December 13, the Episcopate of Sicily canonized this apparition, and it was officially named Madonna delle Lacrime (Our Lady of Tears). 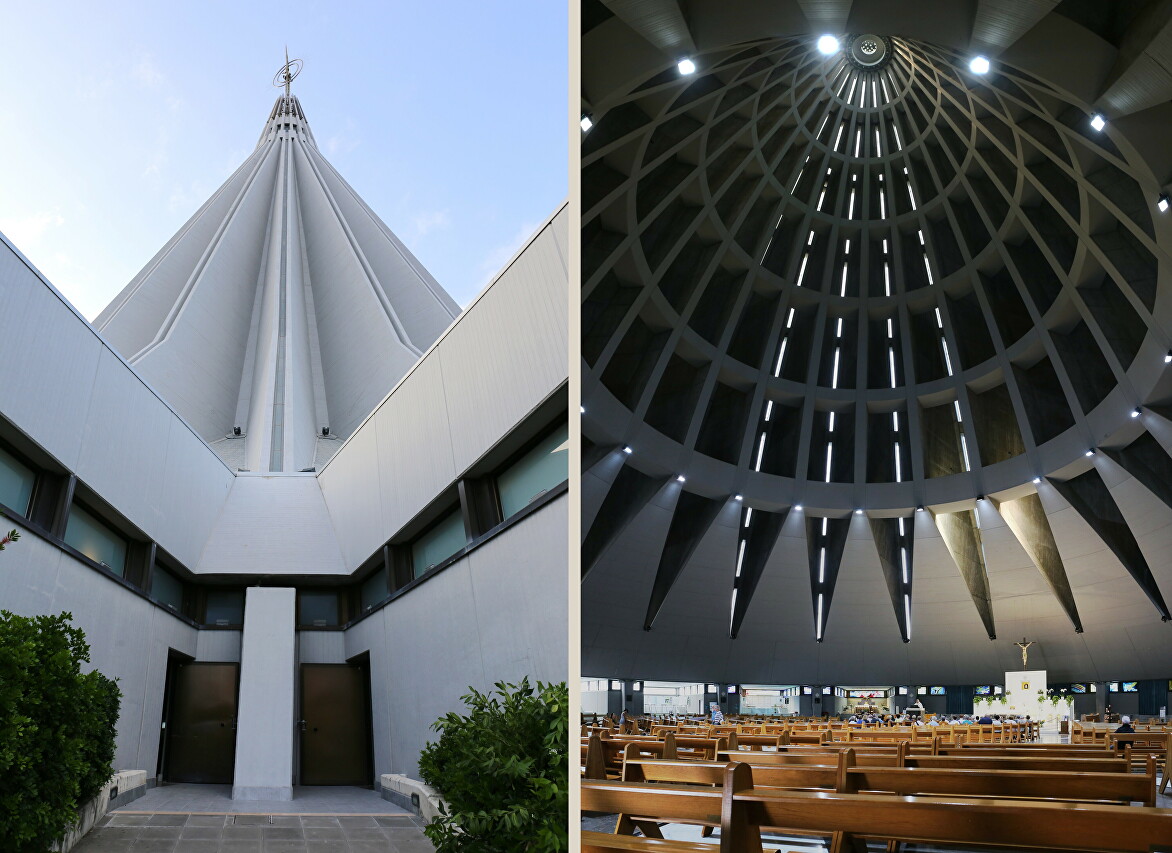 The figure of the Madonna was placed in the crypt in Piazza Euripide, and in memory of the miraculous phenomenon, it was decided to build a more capital structure. On May 9, 1954, Archbishop Ernesto Ruffini of Palermo laid the foundation stone of the Sanctuary of Our Lady of Tears (Santuario delle Madonna delle Lacrime). The ceremony was attended by about 40 thousand people.An international design competition was announced, which ended in 1957 with the victory of French architects Michel Andrault and Pierre Parat and Italian civil engineer Riccardo Morandi. The state-of-the-art project has sparked a heated debate, with the townspeople calling it the "concrete monster". According to the public, the giant environment will finally destroy the authentic appearance of Syracuse, which is already pretty spoiled by modern buildings. Construction still began in 1966, but during the excavation of the foundation, the remains of a building from the sixth century BC were discovered and work stopped for a long time. Construction was completed 28 years later, and on November 6, 1994, Pope John Paul II consecrated the structure in the name of Our Lady of Tears, but the structure is still the subject of criticism. 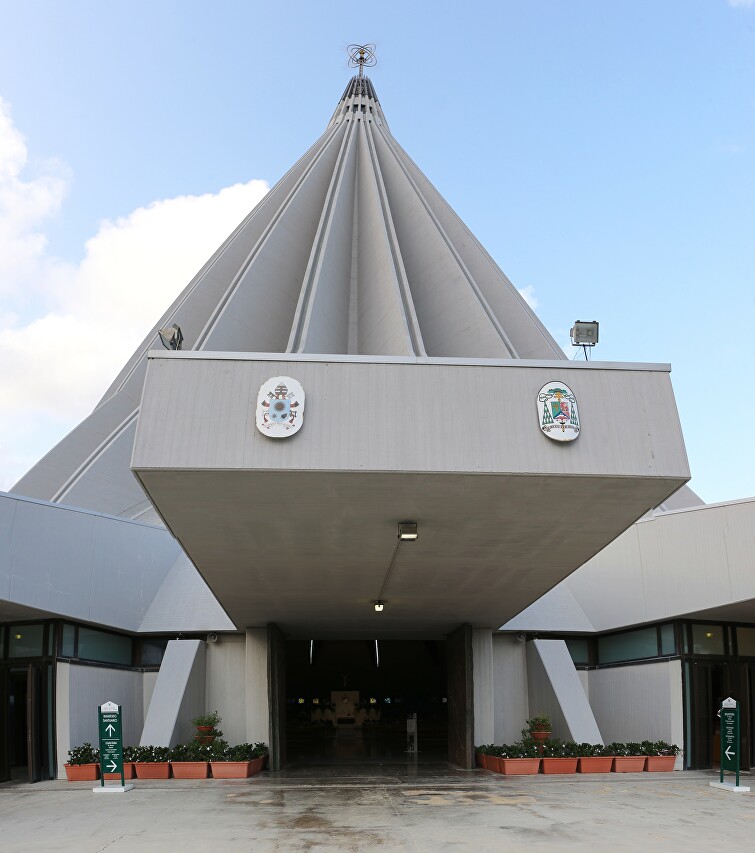 The sanctuary consists of a basilica (or upper temple) and a crypt (or lower temple), covered with a conical structure formed by reinforced concrete ribs. The total height of the structure above sea level is 103 meters or 94.30 meters from zero level, and the diameter is 71.4 meters. The shape of the Sanctuary is the subject of various interpretations. The architects intended to implement structurally the concept and meaning of the elevation of humanity in relation to God. There are other interpretations: this is a lighthouse with which the Mother of God leads to God, some associate the construction with a tear that fell from the sky. 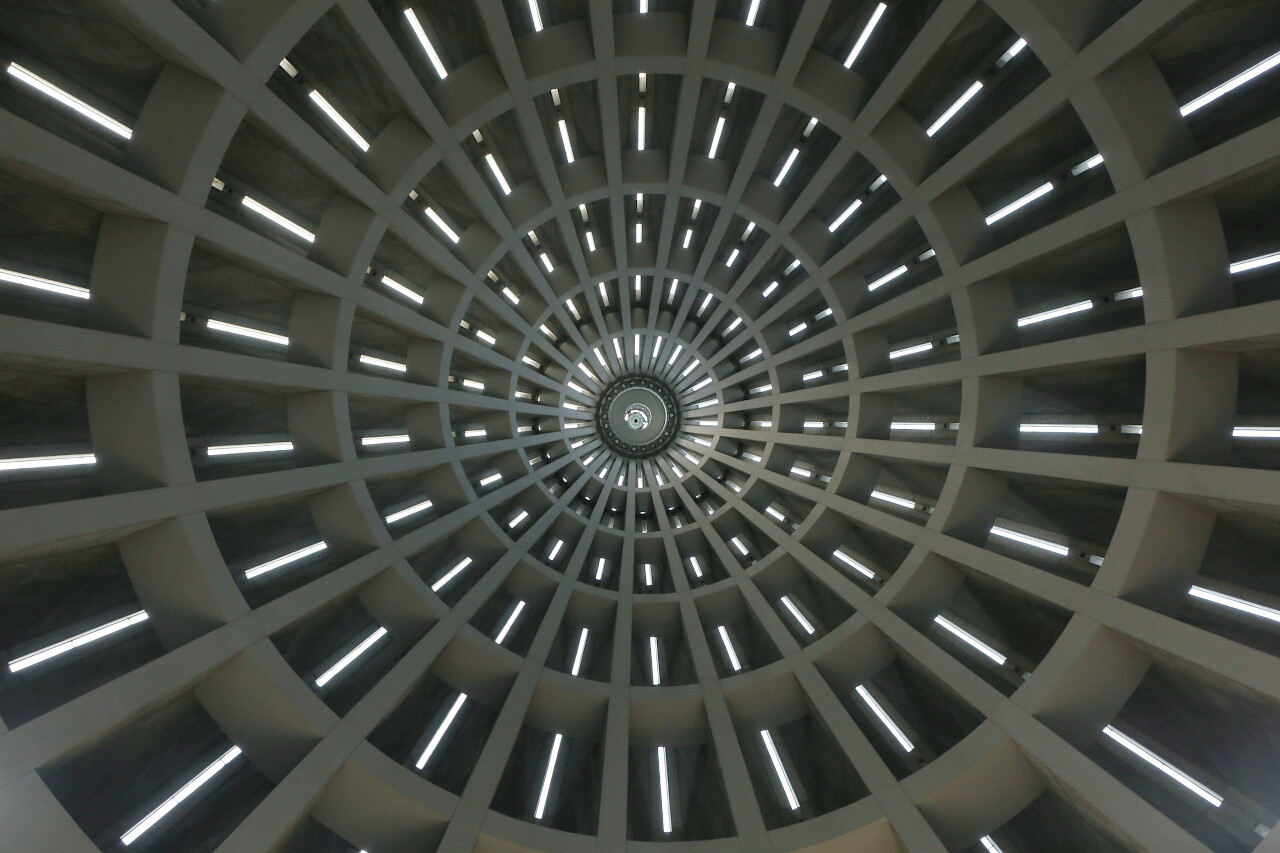 The structure is crowned with a steel openwork structure made by Francesco Caldarella. A three-meter-high statue of the Madonna made of gilded bronze weighing 600 kg is surrounded by a halo with round elements and rays. 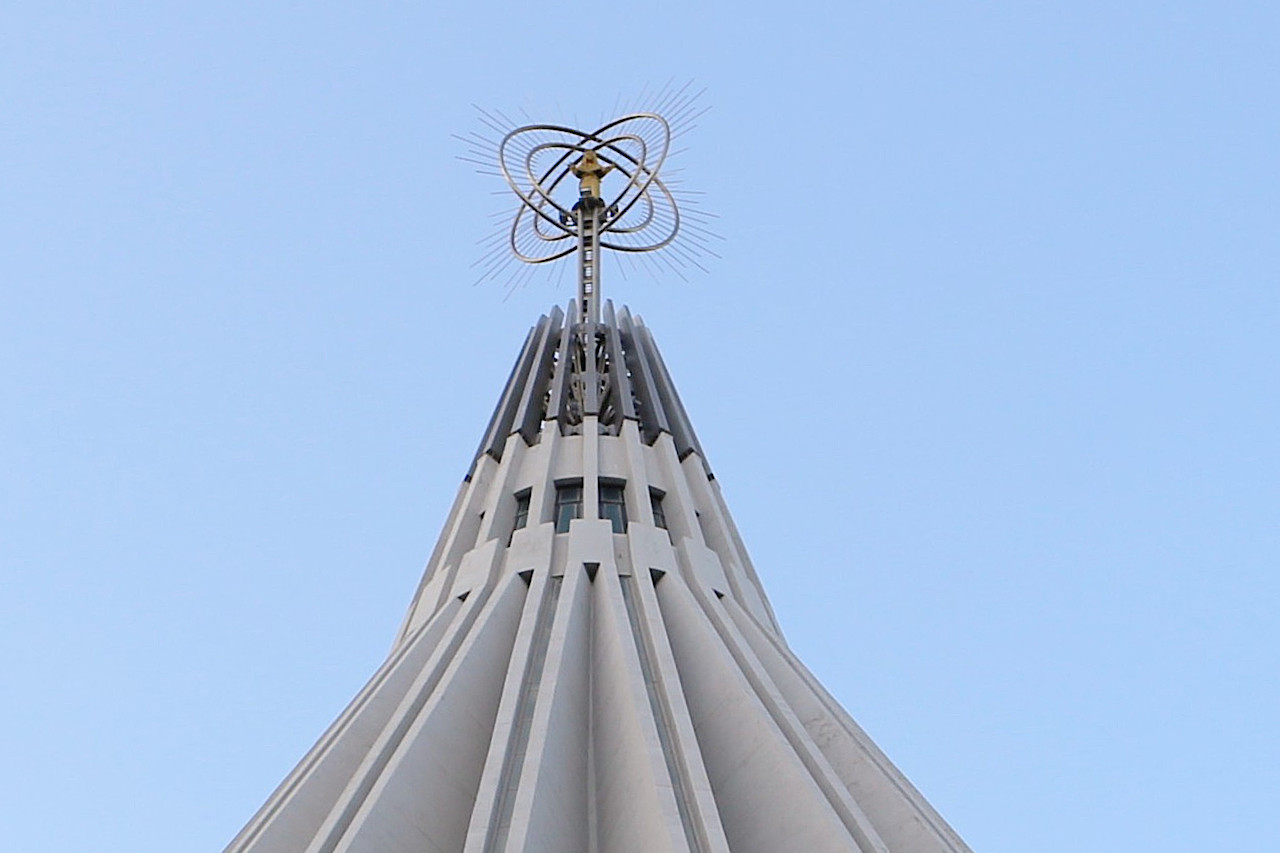 The room has benches for 6 thousand seats, the rest of the space accommodates another 11 thousand standing visitors. 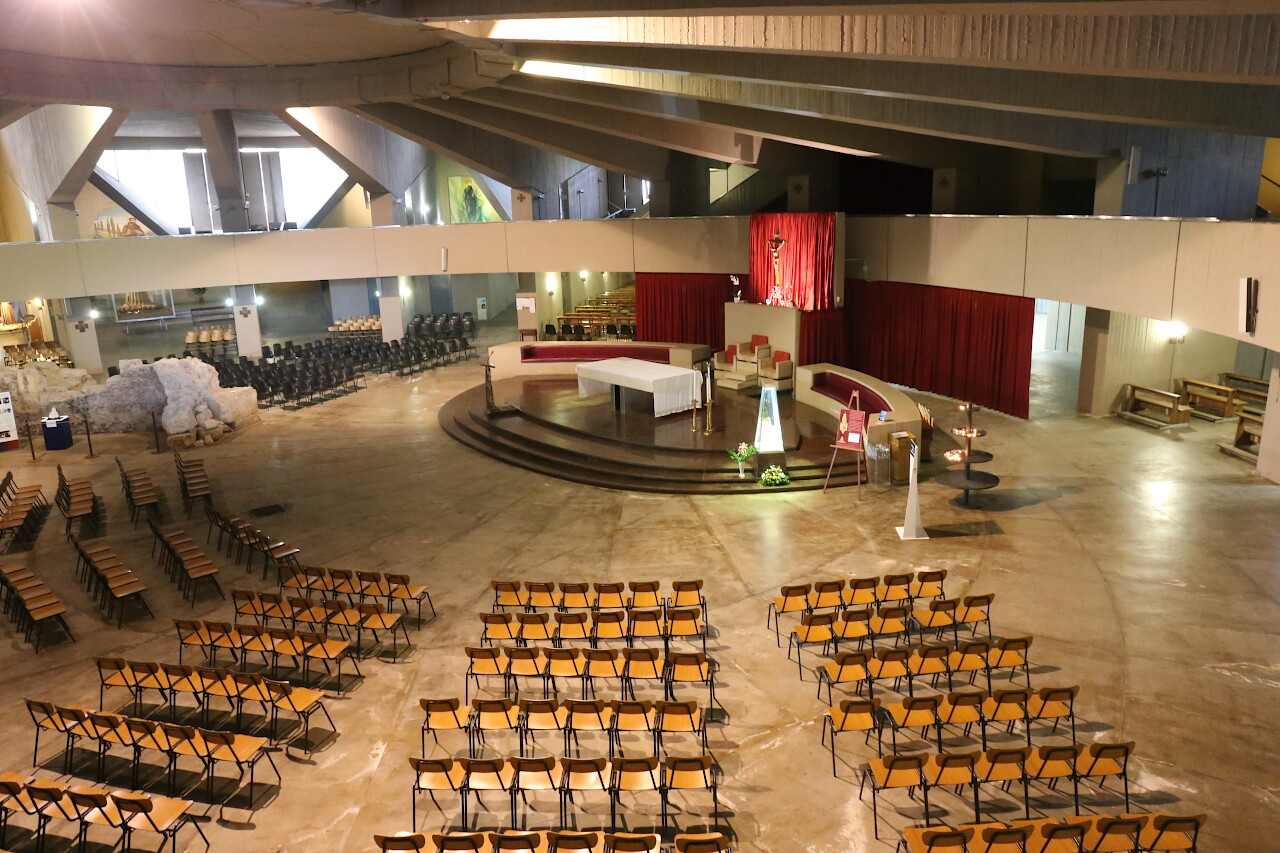 The altar by sculptor Giancarlo Marchese has a marble base, in the center of which is a square table made of stone, its sides are decorated with boards depicting scenes from the Book of the Apocalypse: The Throne, the new Jerusalem, the Lamb, the Tree of Life. The altar is made of white marble, its only decoration is a wonderful figure of the Madonna from the house where the miracle happened. Marchese's work is called "New Heavens and New Earth" because it aims to express the completion of history and the return of Jesus. Above the altar is an early eighteenth-century wooden crucifix by an unknown artist. 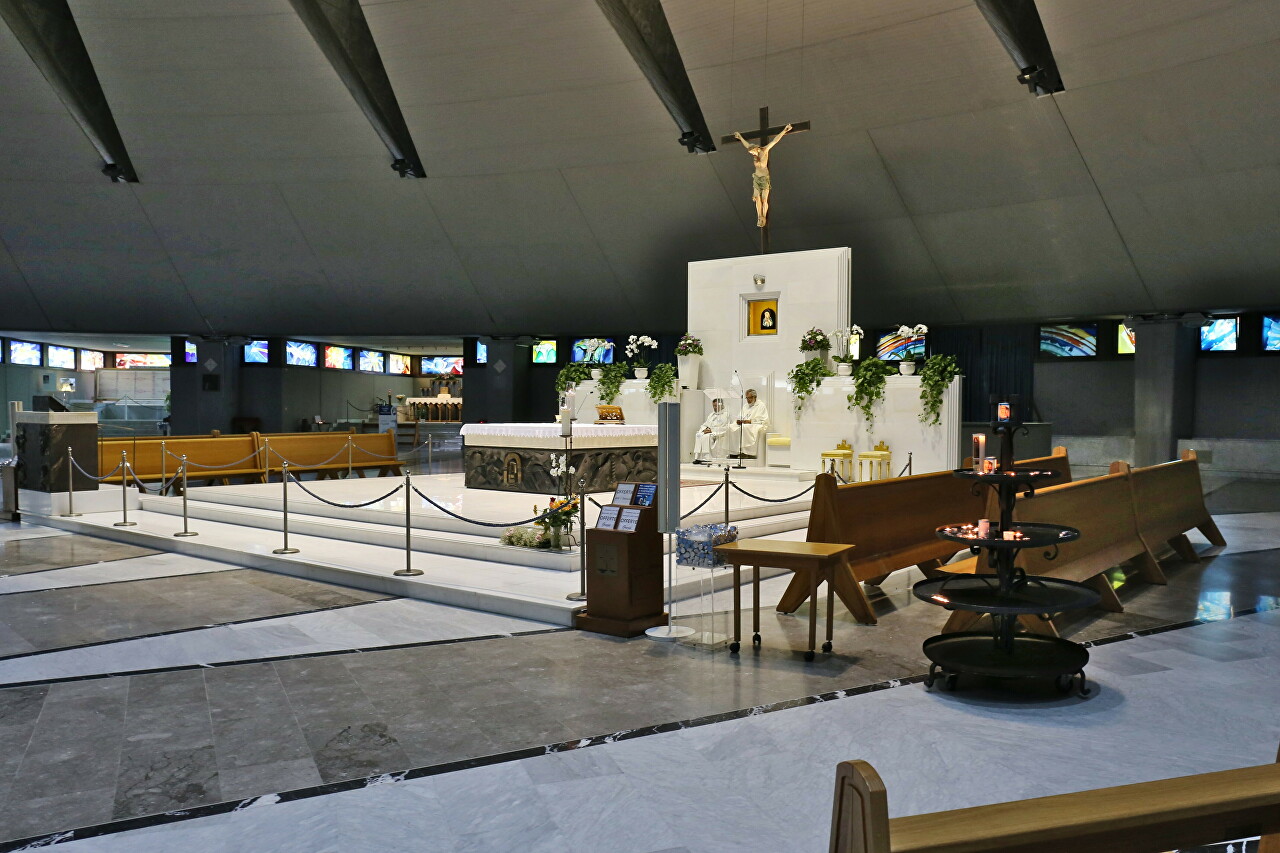 There are 16 chapels around the circumference of the main dome. 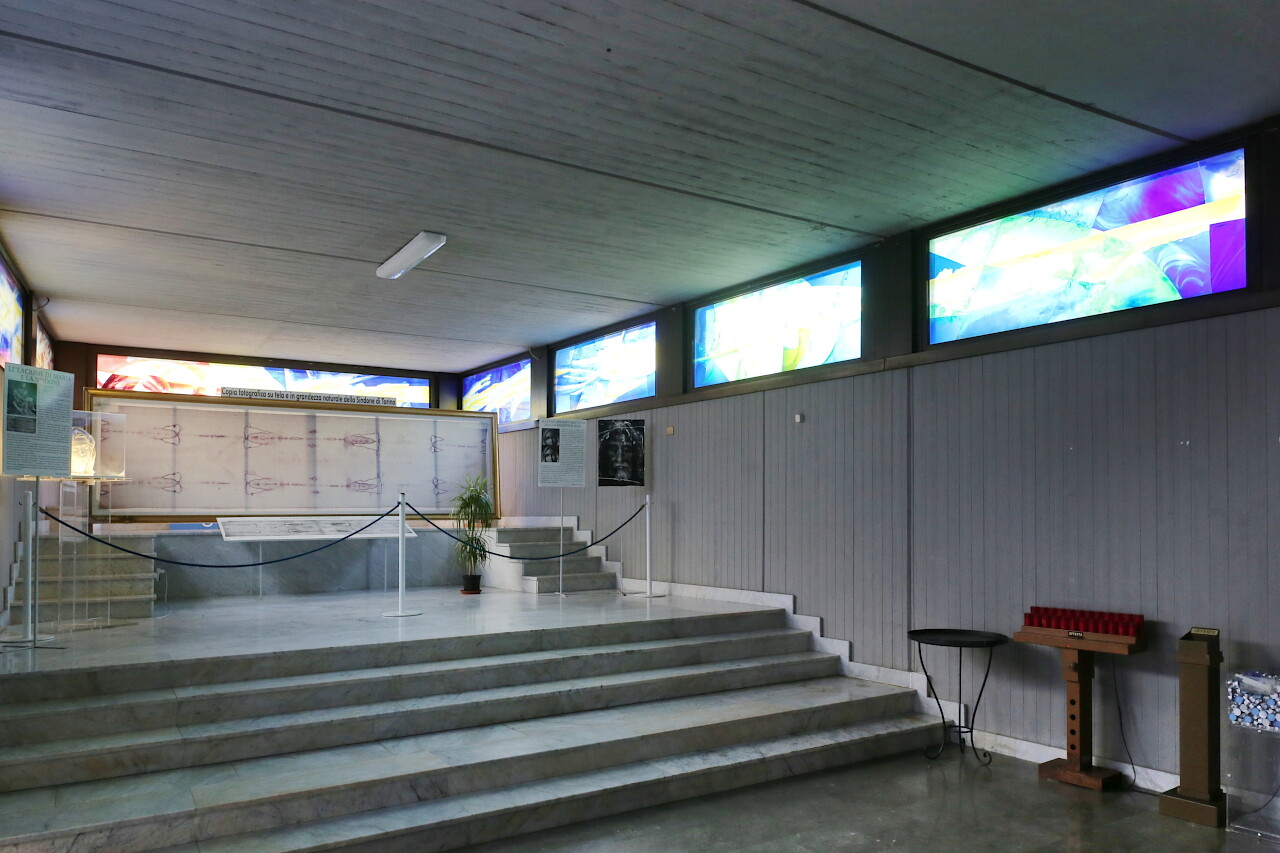 The chapel windows are decorated with stained glass windows depicting phrases from psalms. 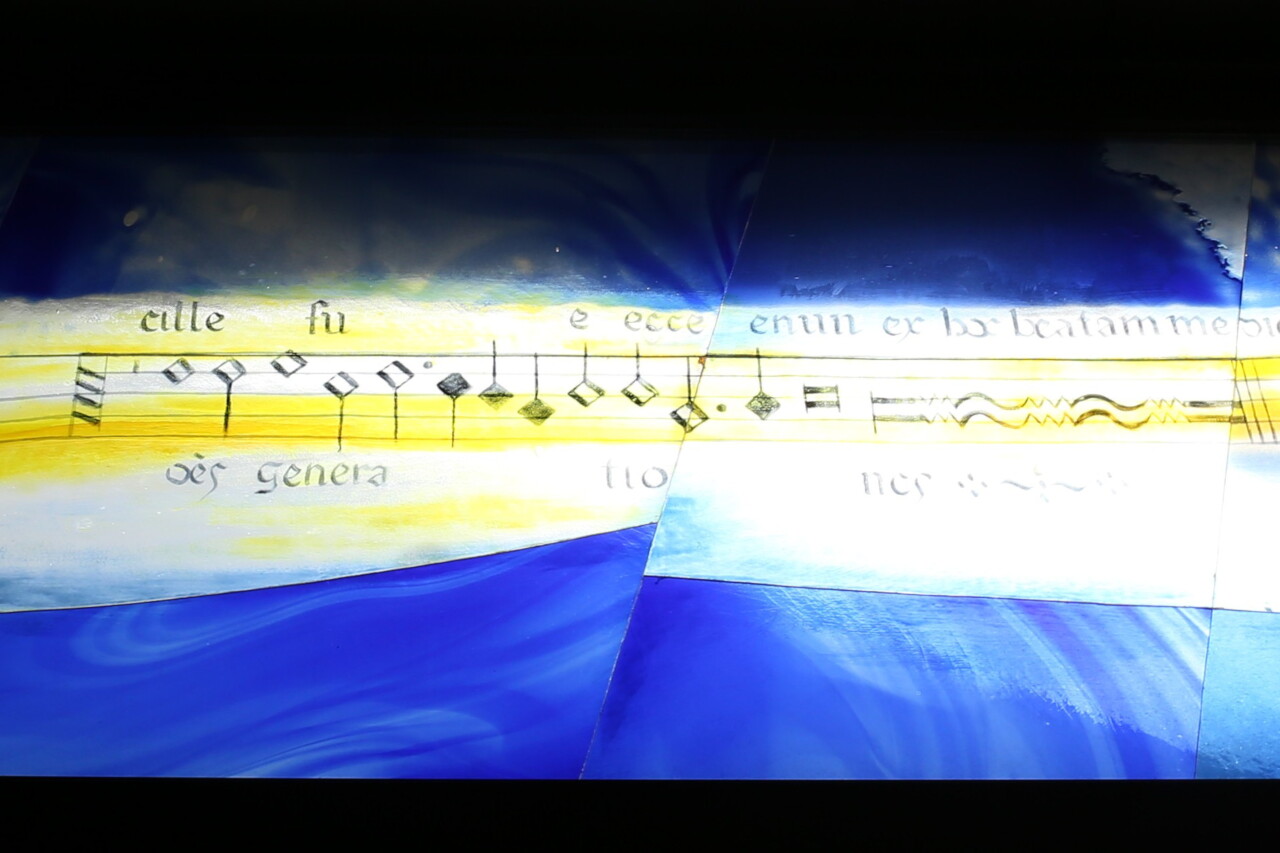 To the left of the altar is the Chapel of the Holy Communion, where Holy Mass is celebrated every morning. 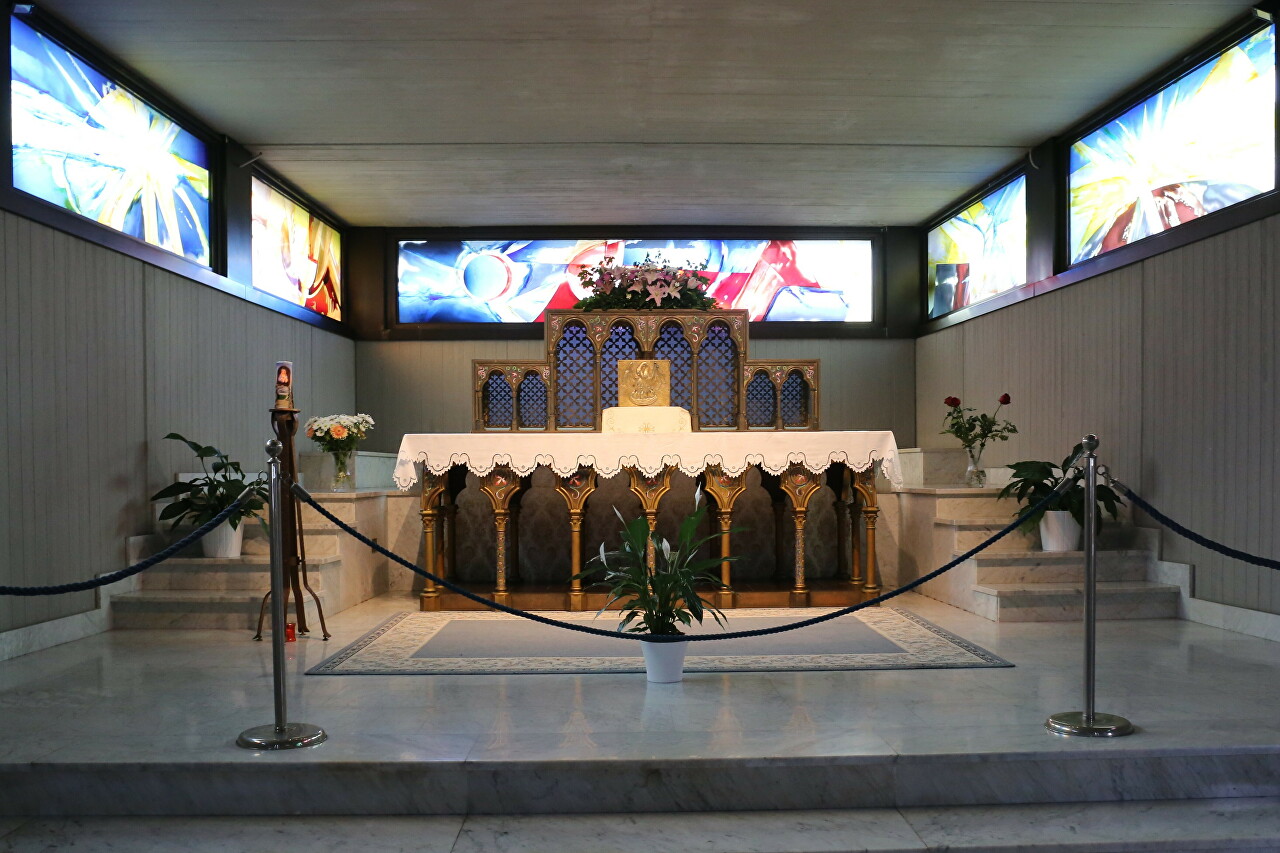 The next chapel is dedicated to the Holy Shroud. 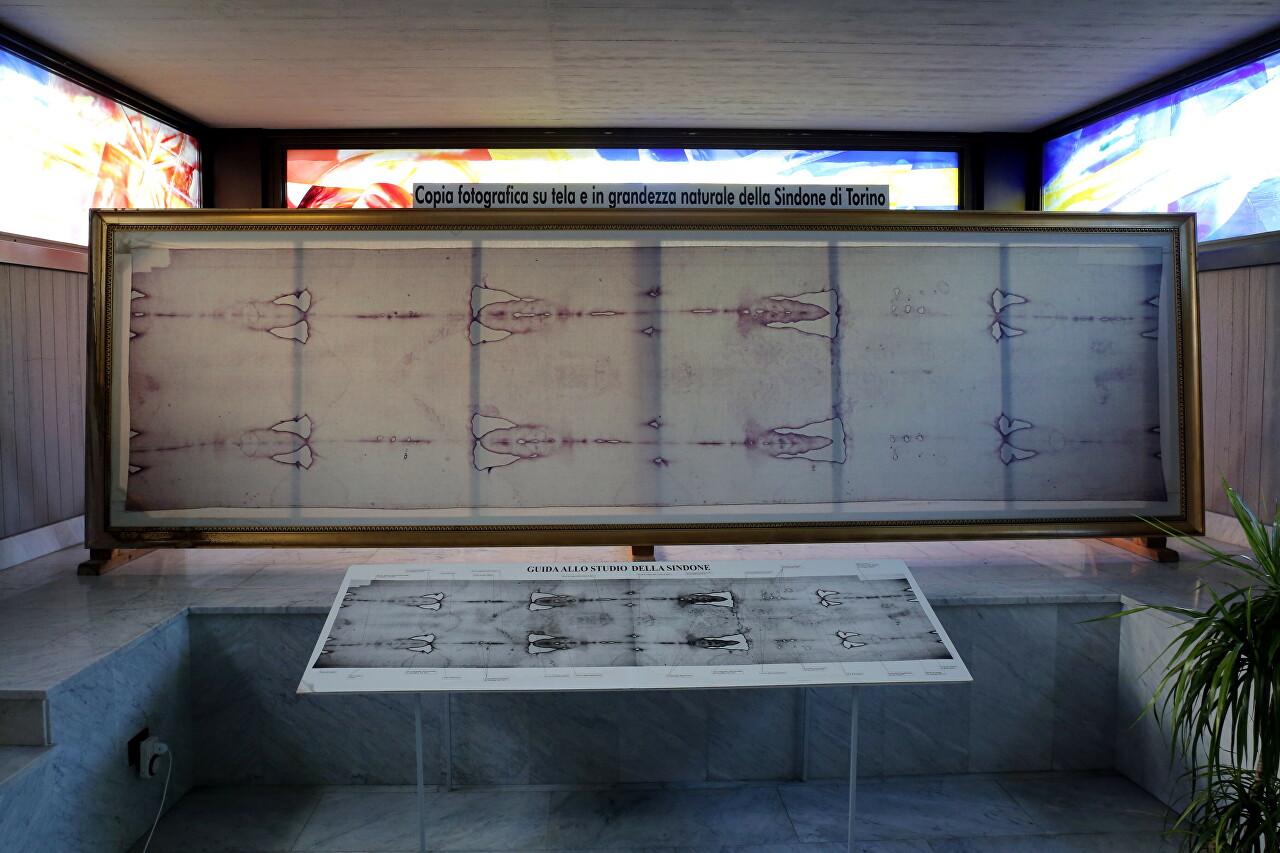 The chapel of Saint Joseph, the husband of the Holy Virgin, which in Italy is called San Giuseppe. 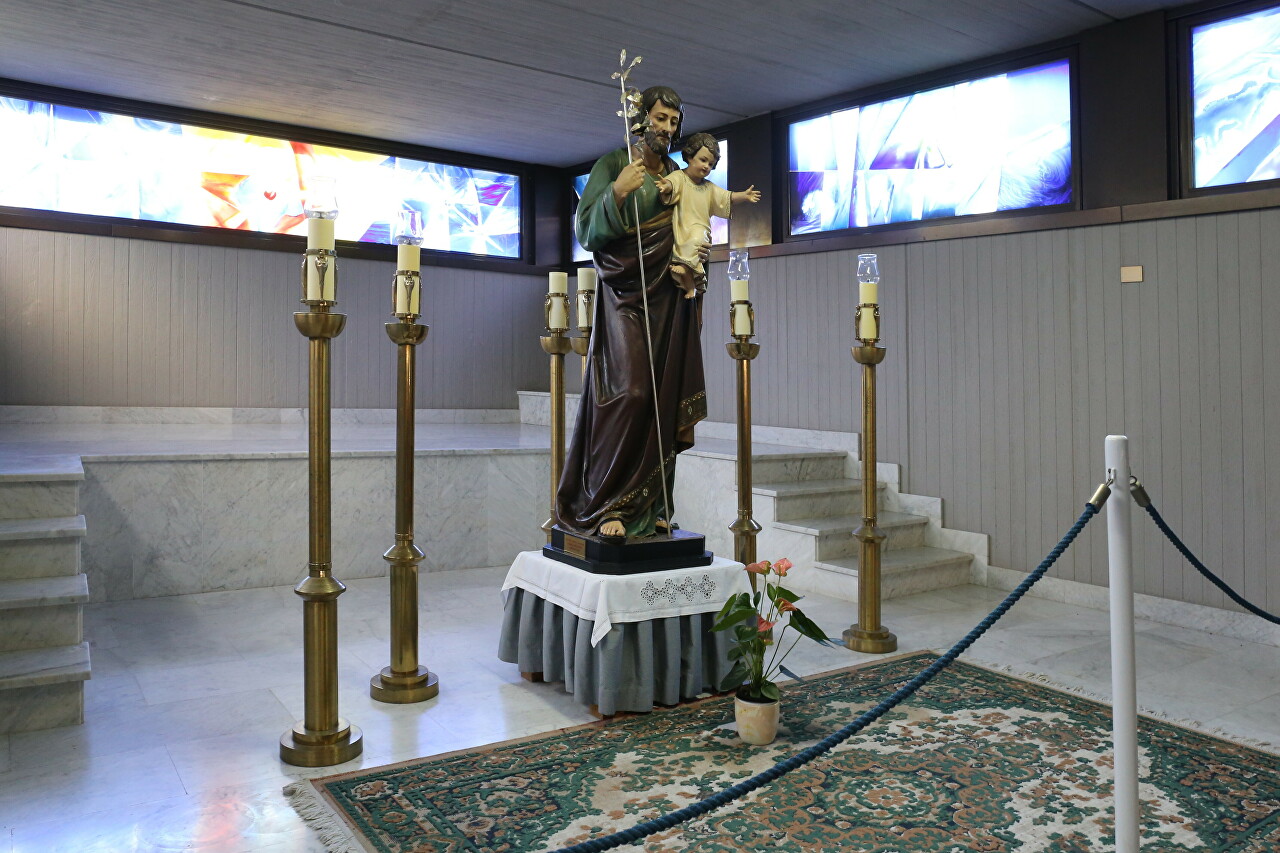 On the walls of the chapel it is fashionable to see pastel paintings with scenes from the Journey of Jesus on the Cross to Calvary. 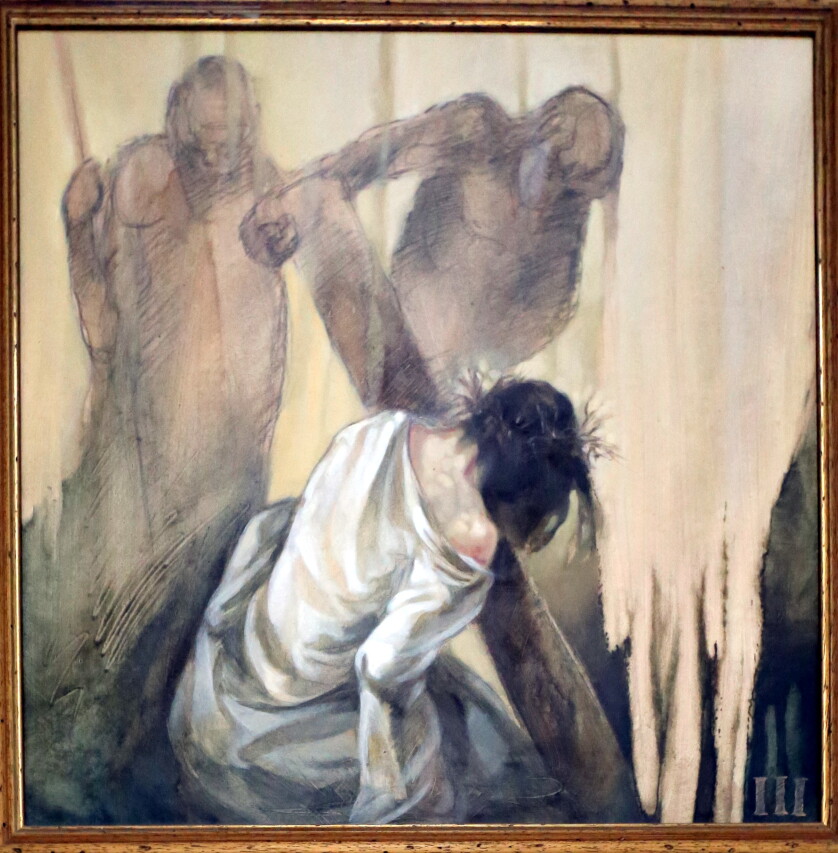 The lower temple was a temporary storage of the miraculous figurine during the construction of the Sanctuary. The first crypt was consecrated by the Archbishop of Syracuse in the name of the Immaculate Heart of Mary on August 28, 1968. On the floor of the crypt there are remains of buildings from the Roman era, with mosaic floors. In the lower church there are several chapels and an iconostasis, where holy masses are celebrated according to the Byzantine rite. In the Chapel of Santa Lucia is the grave of the Archbishop of Syracuse. 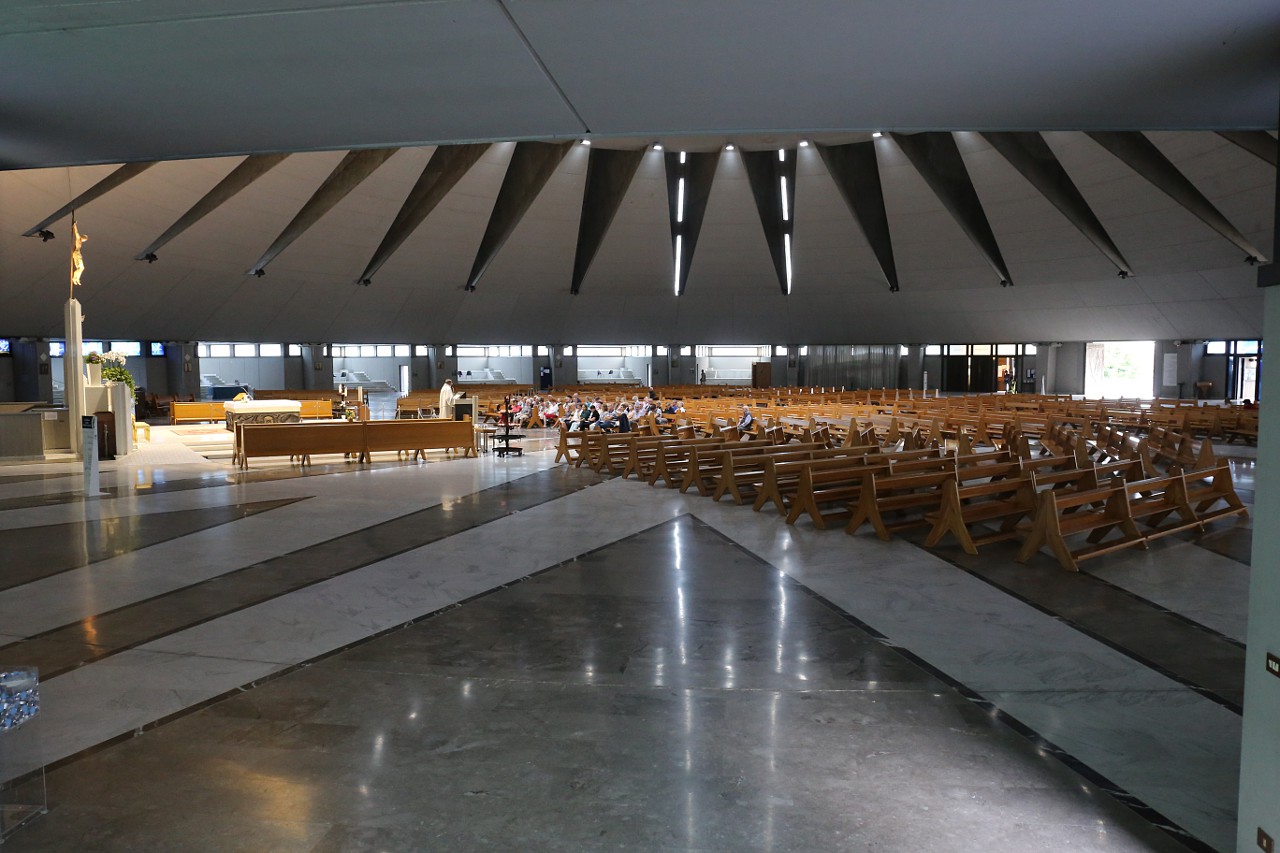 In the Sanctuary there is a small museum where there are unique exhibits that tell the story of the Madonna delle Lacrime, including a cotton swab used to collect the tears of the Madonna; a pipette and slide used in the laboratory by the medical commission to conduct chemical analyses; a table on which official documents on the canonization of the miracle were signed; a silver trowel that It was used by Cardinal Ernesto Ruffini to lay the foundation stone. It also stores gifts made by officials. A separate exhibition of the museum tells about the visit of John Paul II to Syracuse. 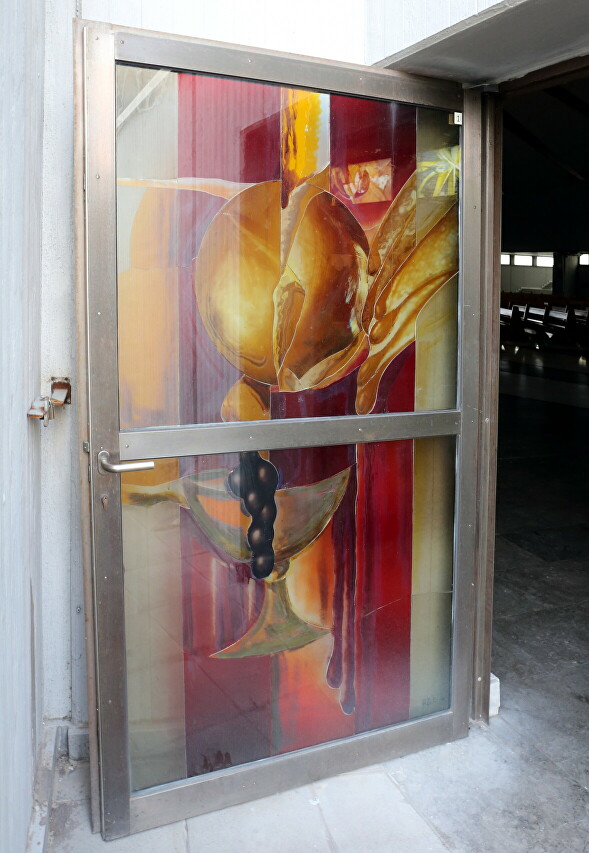 During my visit to the Sanctuary, there was a mass for pilgrims from Germany, which was held in German. 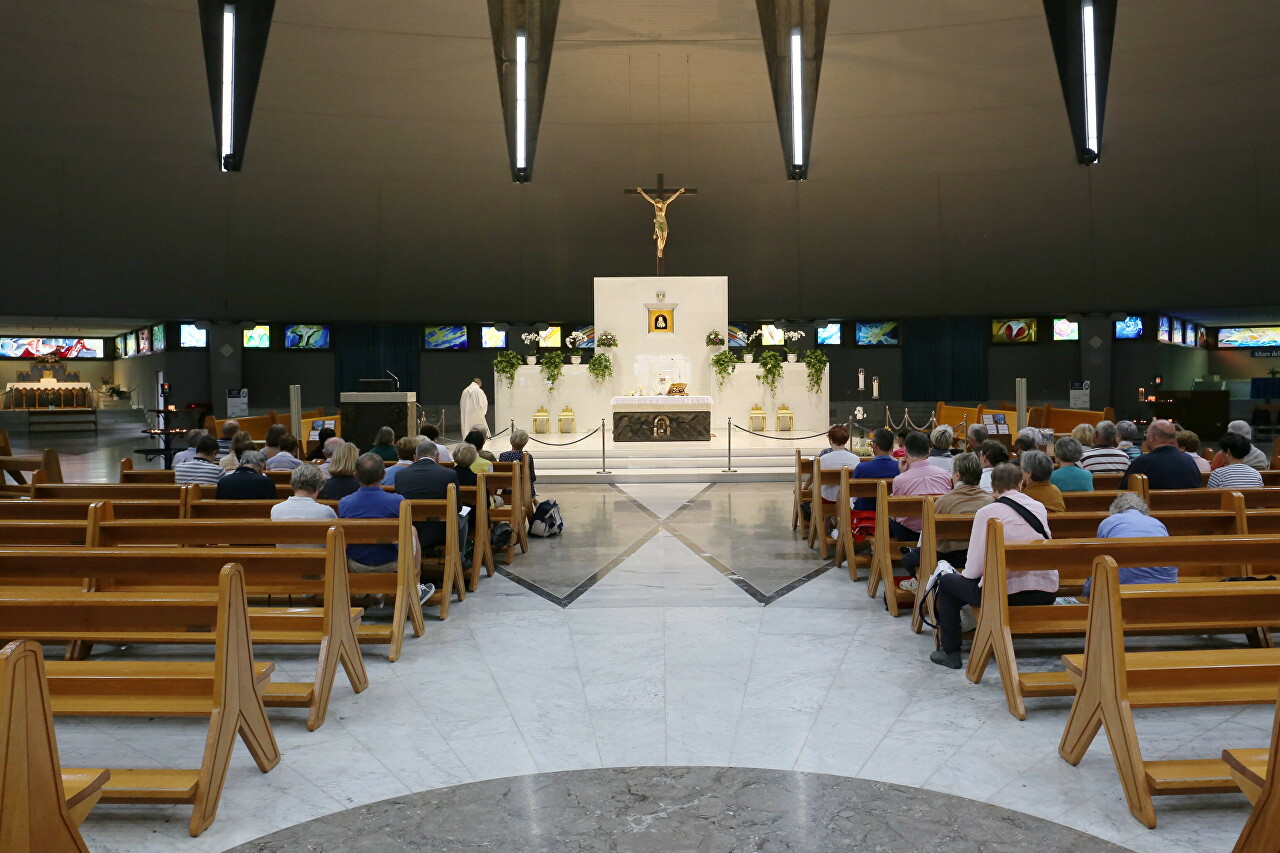 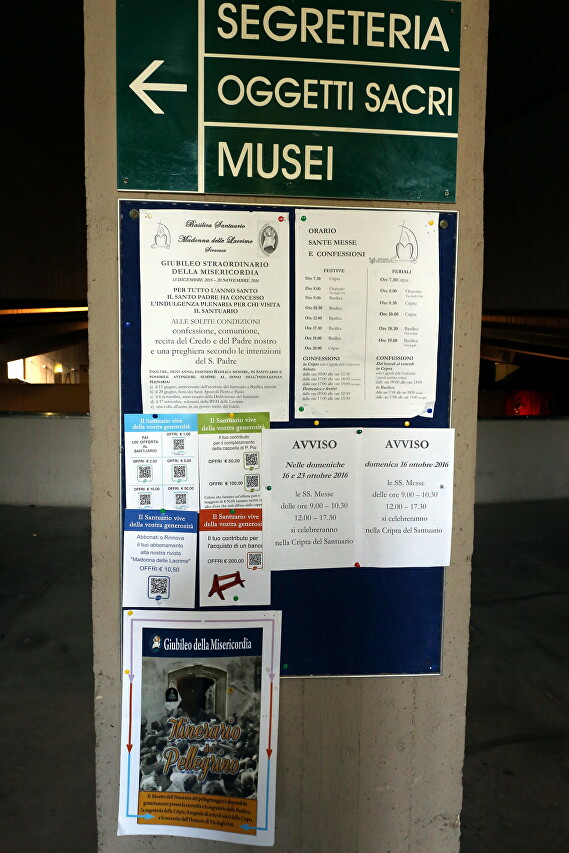