There are several ways to get to Mount Etna from Catania: for the laziest, a guided tour with a base price of 50 euros or more is available at numerous travel agencies in the city. If you are with your family or company, you can rent a car. The most affordable way for individuals is by bus to the village of Rifugio Sapienza, where the Funivia dell'Etna cable car's lower station is located. The only flight departs at 8: 15, and the same bus will take you back at 16: 30. Departure from the square of Pope Giovanni XXIII, in front of the train station, stop inside the ring in the center of the square. I arrived half an hour before departure, but there were already a lot of people waiting to visit the famous volcano and I took a queue. When the bus arrived, I was met with an unpleasant discovery: tickets appeared in the hands of my fellow travelers. There were no cash registers nearby, so I asked the Chinese couple where they had bought them. It turned out that I sell tickets in one of the cafes on the square. I later learned that this was a common occurrence in Sicily, but I was only here for the third day, so at first I didn't understand how this was possible. The queue was moving fast, I was already at the bus door and it was already too late to run to the cafe, then I noticed that some passengers were buying tickets from the driver. You can (even need) buy a round-trip ticket right away, I paid 6.50 euros, a one-way ticket costs 4 euros. Interestingly, those who bought tickets in advance do not have any advantage, boarding takes place on a first-come, first-served basis. However, this is also common in Italy. I got one of the last available seats, but boarding continued, as a result, everyone got on the bus. Let me remind you that it was at the beginning of October, perhaps not everyone will be lucky enough to leave in a more popular season. 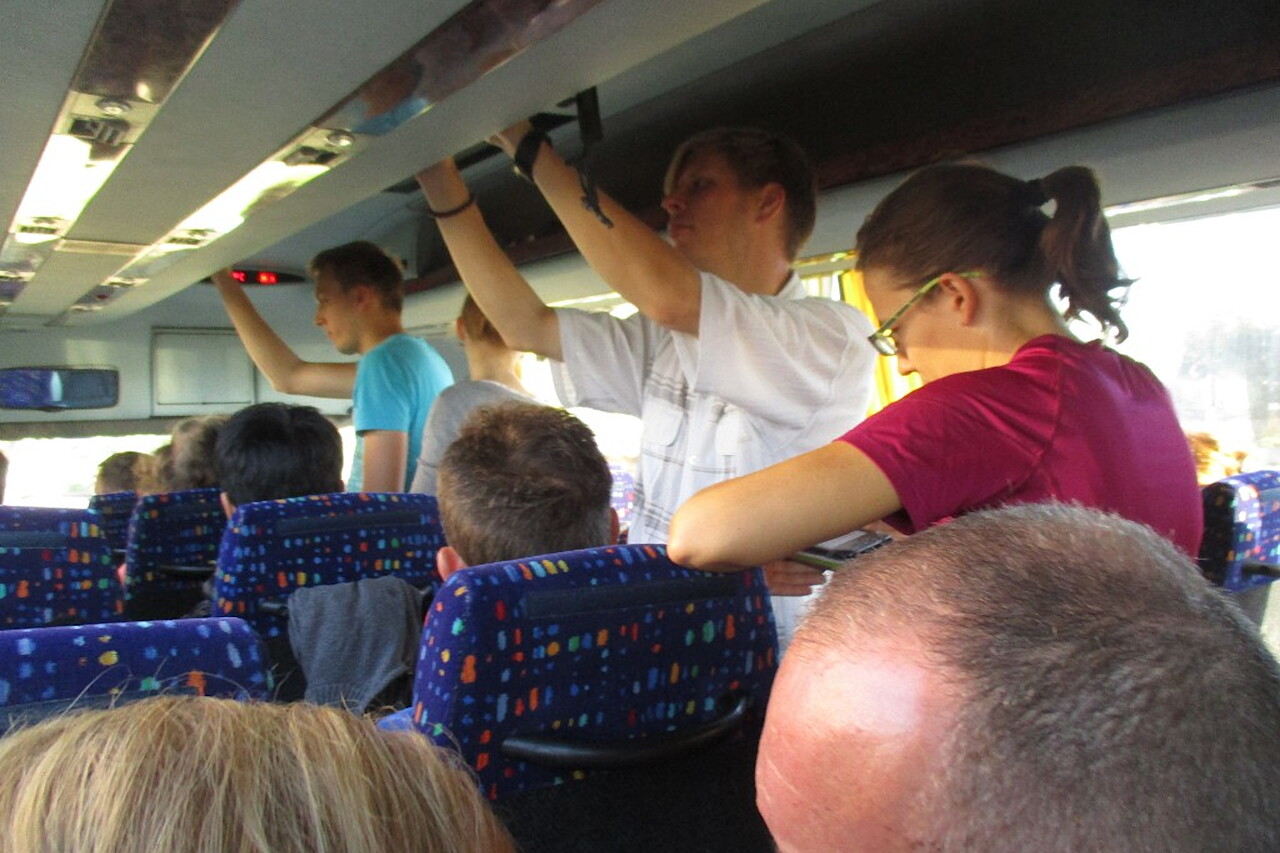 The bus ascends the mountain for about two hours, and after about an hour we stopped in the town of Nicolosi, near the Church of the Holy Spirit. Here, some passengers ran to buy some local sweets, and I just stretched my legs in the square on Victor Emmanuel Square. 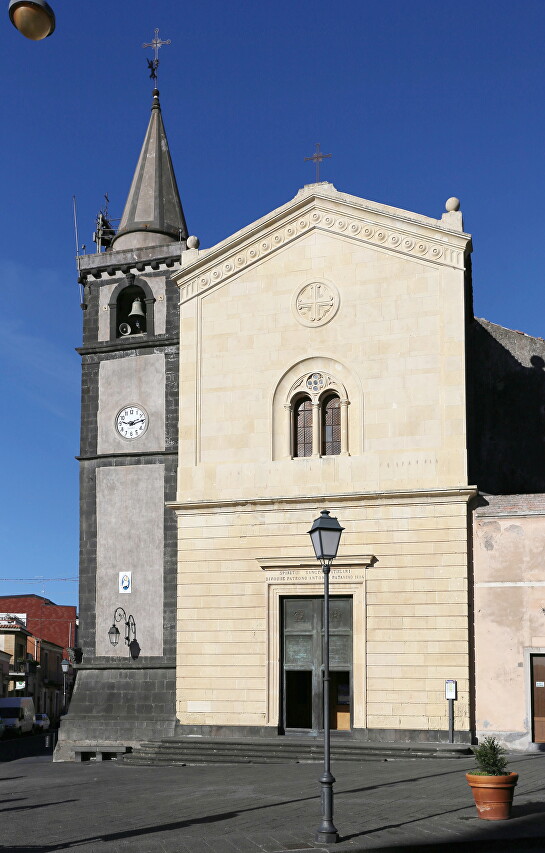 The town with a population of about 6 thousand people dates back to the 14th century and several times seriously suffered from eruptions. However, the inhabitants stubbornly restored it, not wanting to leave the incredibly fertile land fertilized by volcanic ash. The city deserves a special visit - there are several beautiful Baroque churches and old buildings. 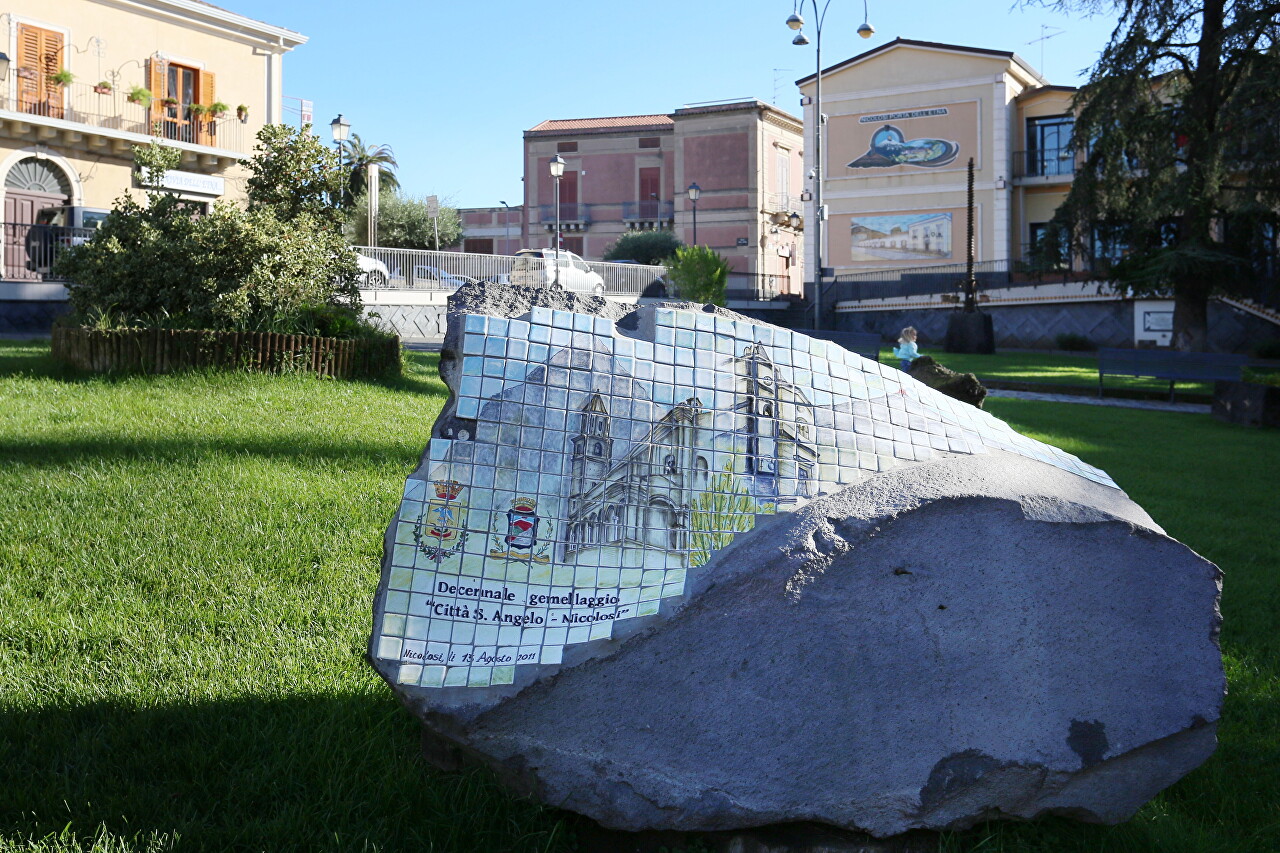 Now the most important source of income for citizens is tourism associated with Mount Etna. From here start jeep tours on the slopes of the volcano. The town is located at the foot of Mount Rossi (Monti Rossi) with two peaks having an altitude of 933 and 949 meters above sea level. These are the pyroclastic cones of the volcano, formed during the eruption of 1669. 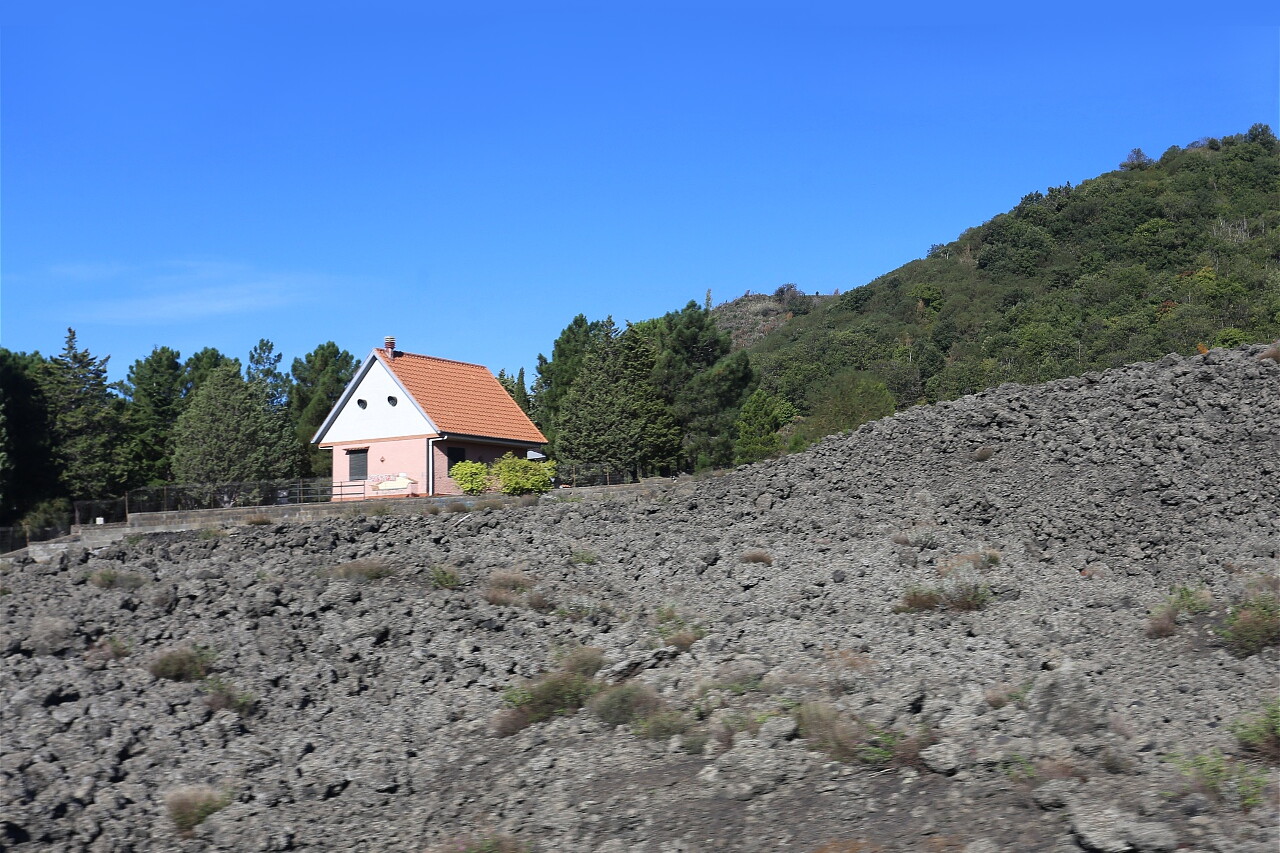 Now on the slopes of the mountain there is an amusement park Monti Rossi Adventure Park, and on the peaks there are observation platforms from where you can enjoy spectacular views of the volcano and the surrounding area of Catania. 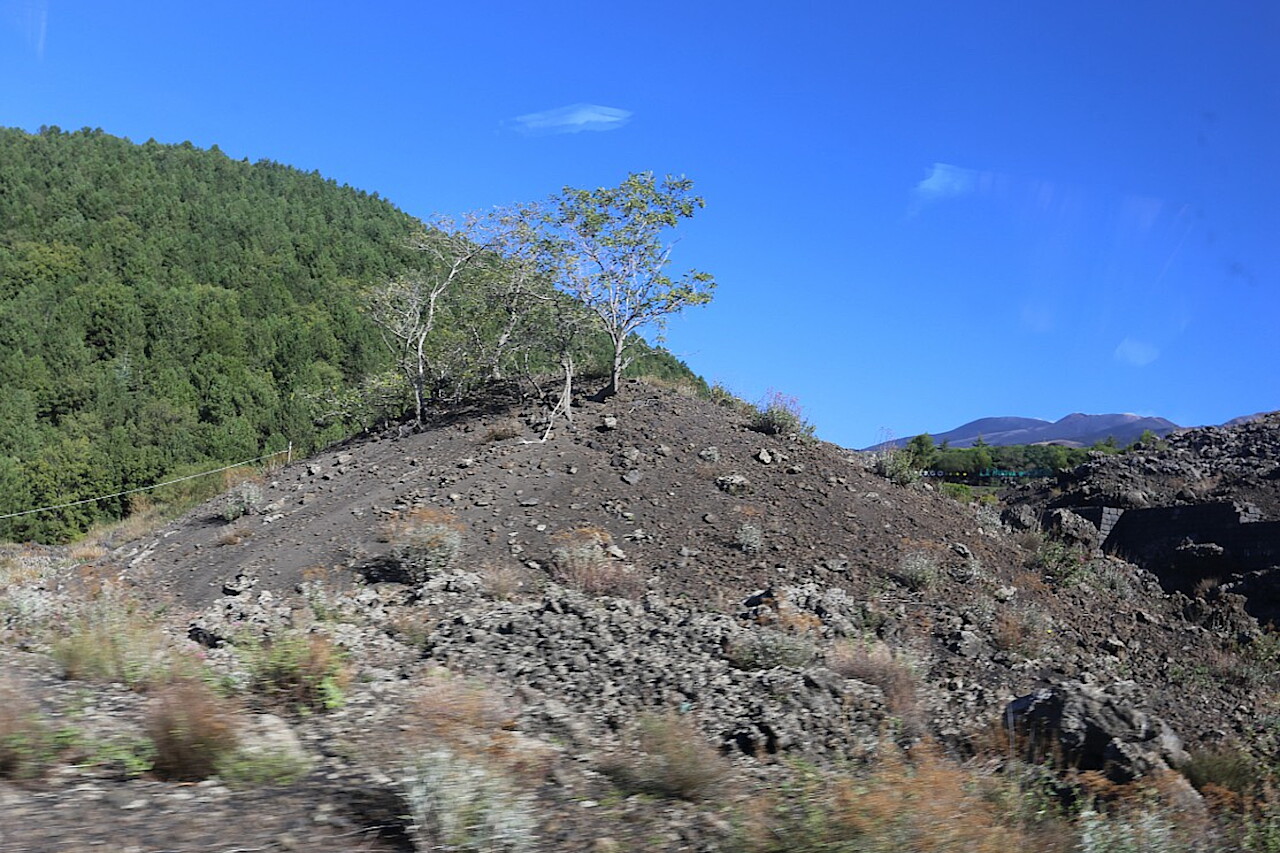 About five kilometers from Nicolosi, we pass the restaurant La Nuova Quercia. Above them is the Monte Sona Mountain, which offers several scenic hiking trails. 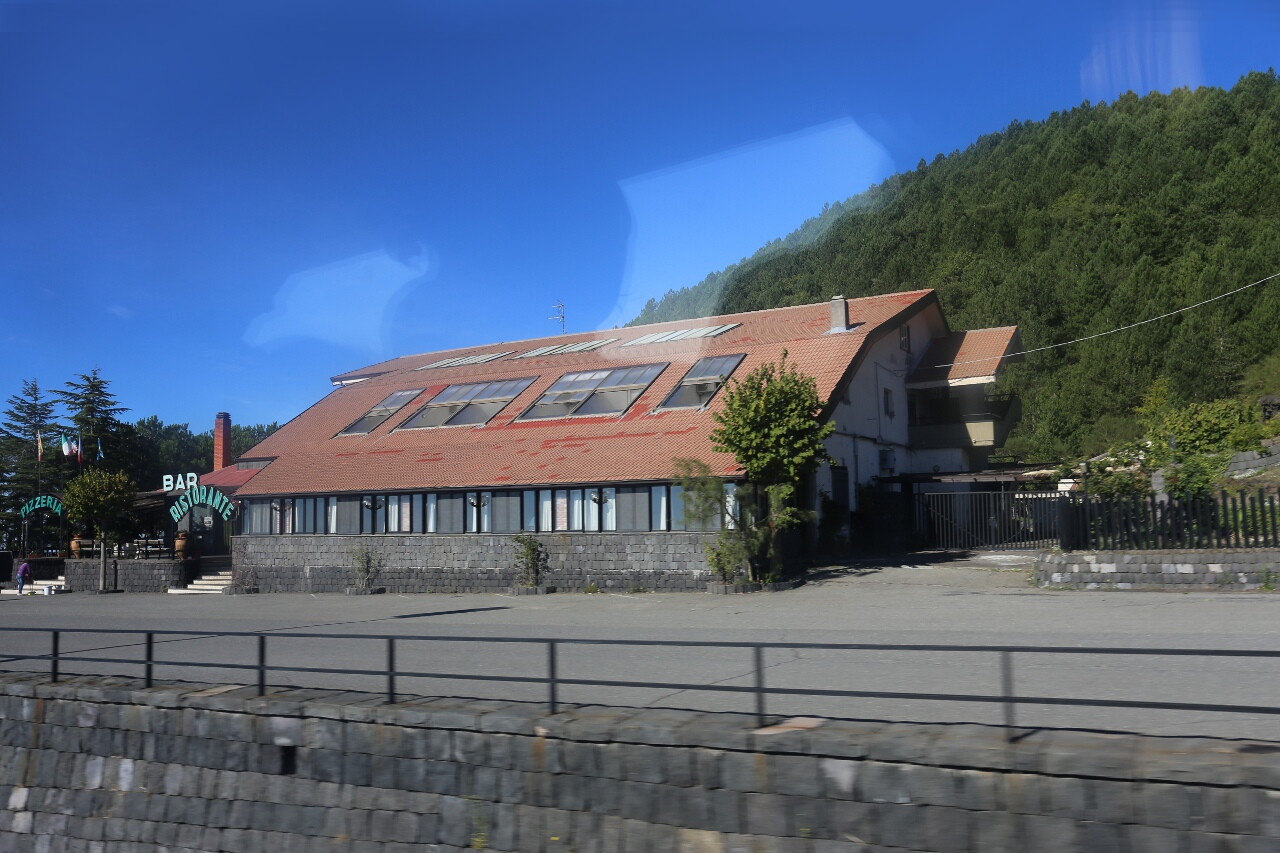 In front of the restaurant is the observation deck known as Belvedere di Catania. 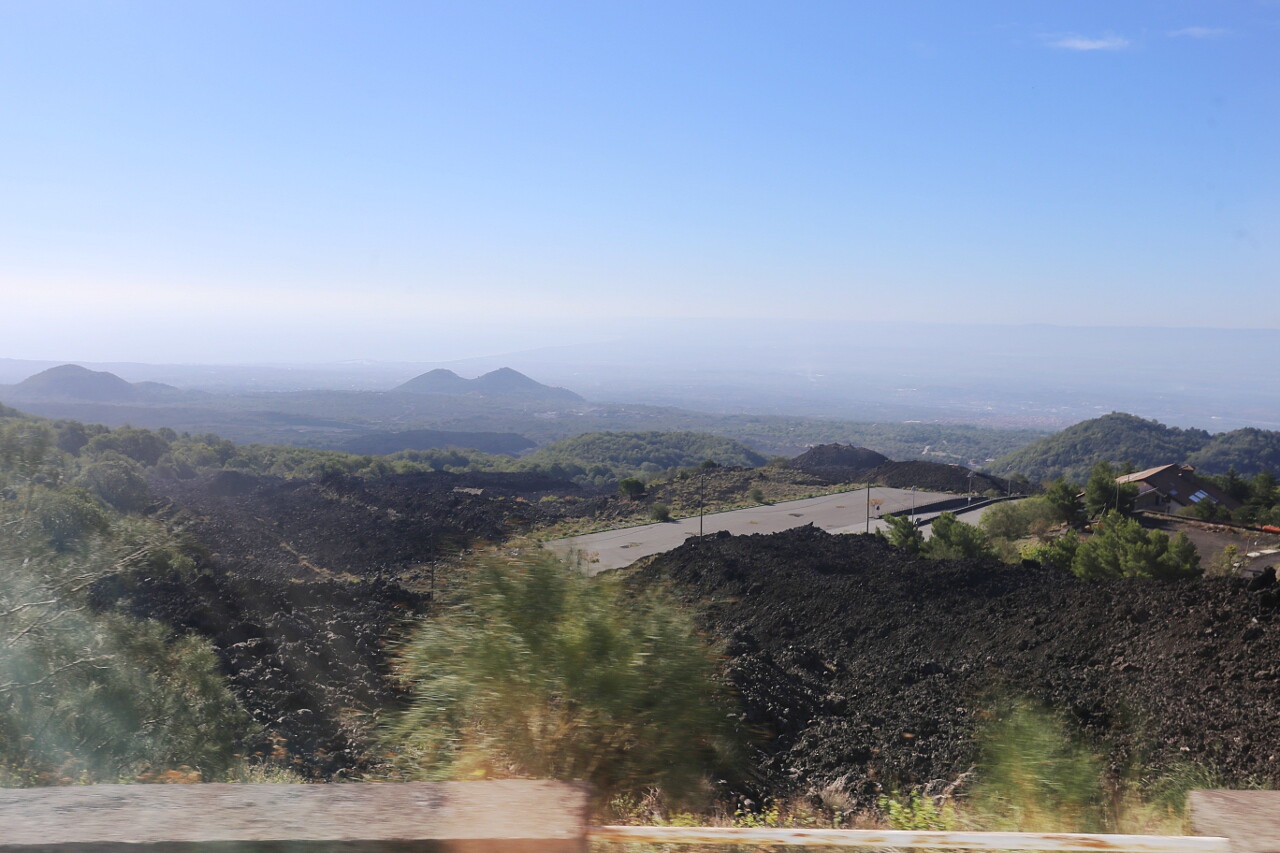 Then the road is surrounded by endless lava fields formed by the 1983 eruption. 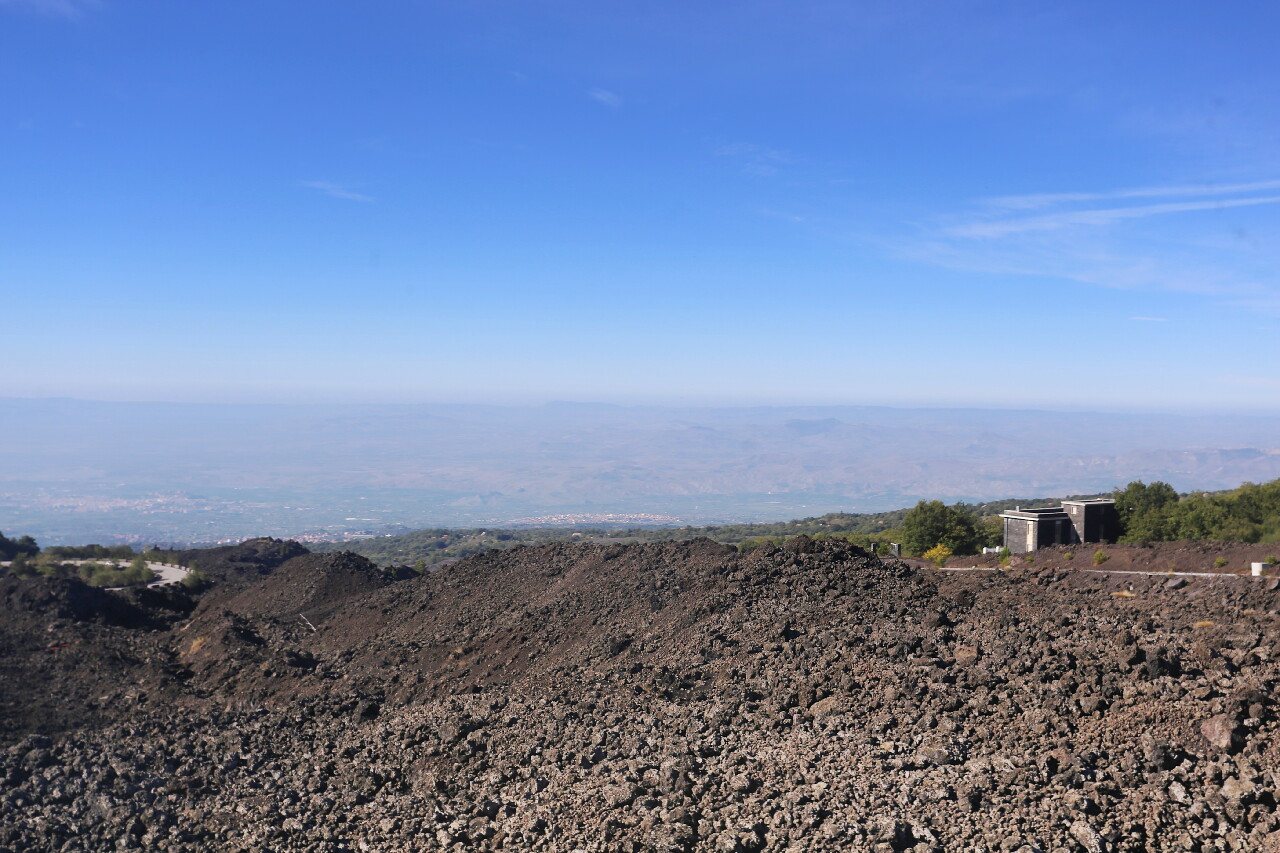 Among the lifeless spaces, the brand-new building of the Don Bosco Hotel looks absolutely incredible. Before the eruption, there was a small tourist village, of which only this building survived, although it was completely burned out. 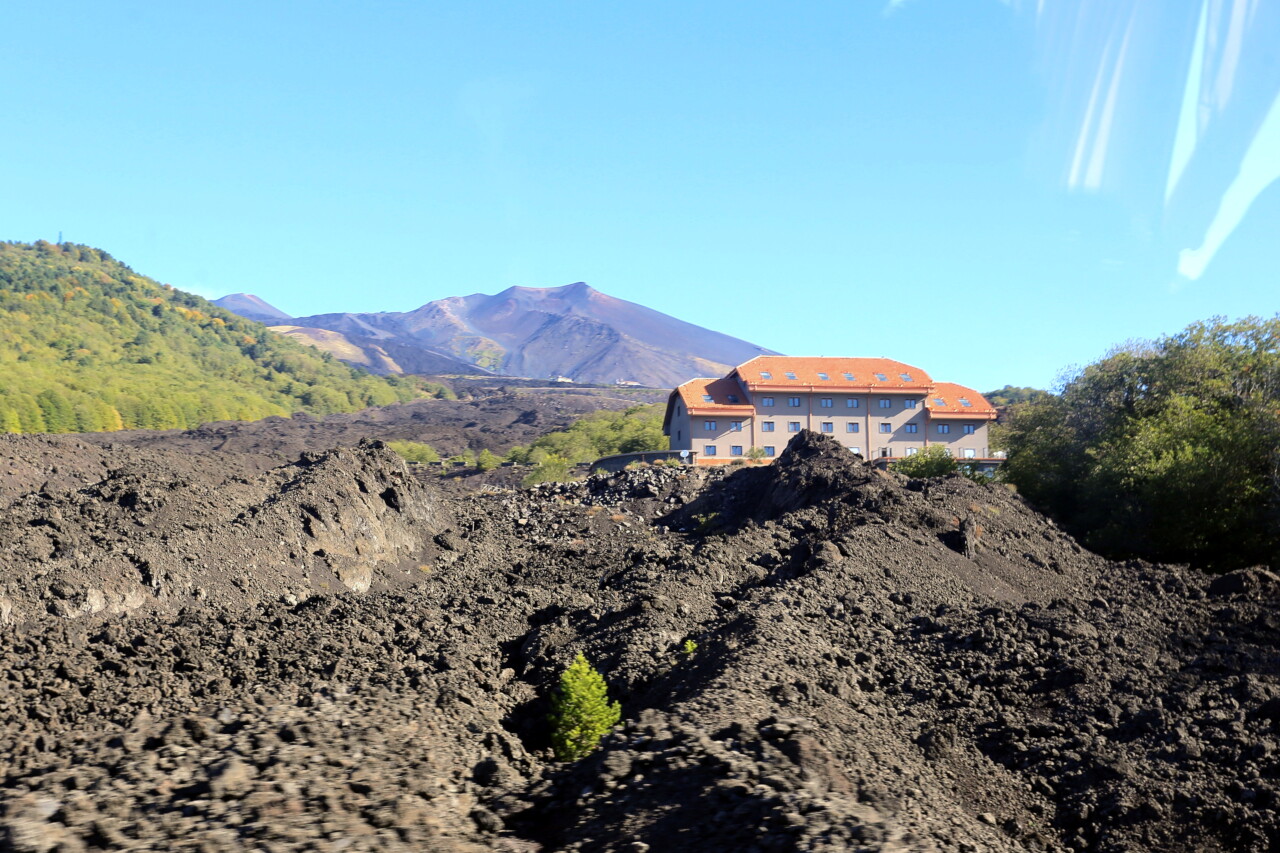 On the morning of March 27, 1983, the caretaker of the upper station of the cable car reported numerous tremors. The eruption started around 7: 30 a.m. on March 28. The first messengers were streams of mud formed as a result of melting snow. At about 11: 30 a.m., the fog on the mountaintop cleared and a fault more than two kilometers long, stretching from an altitude of 2,900 meters to 2,350 meters, was visible on the southern slope, with a lava flow flowing out of its lower part, which has already overcome more than 800 meters. The fiery river demolished eight pylons of the cable lift and at an altitude of 2200 meters split into two streams. 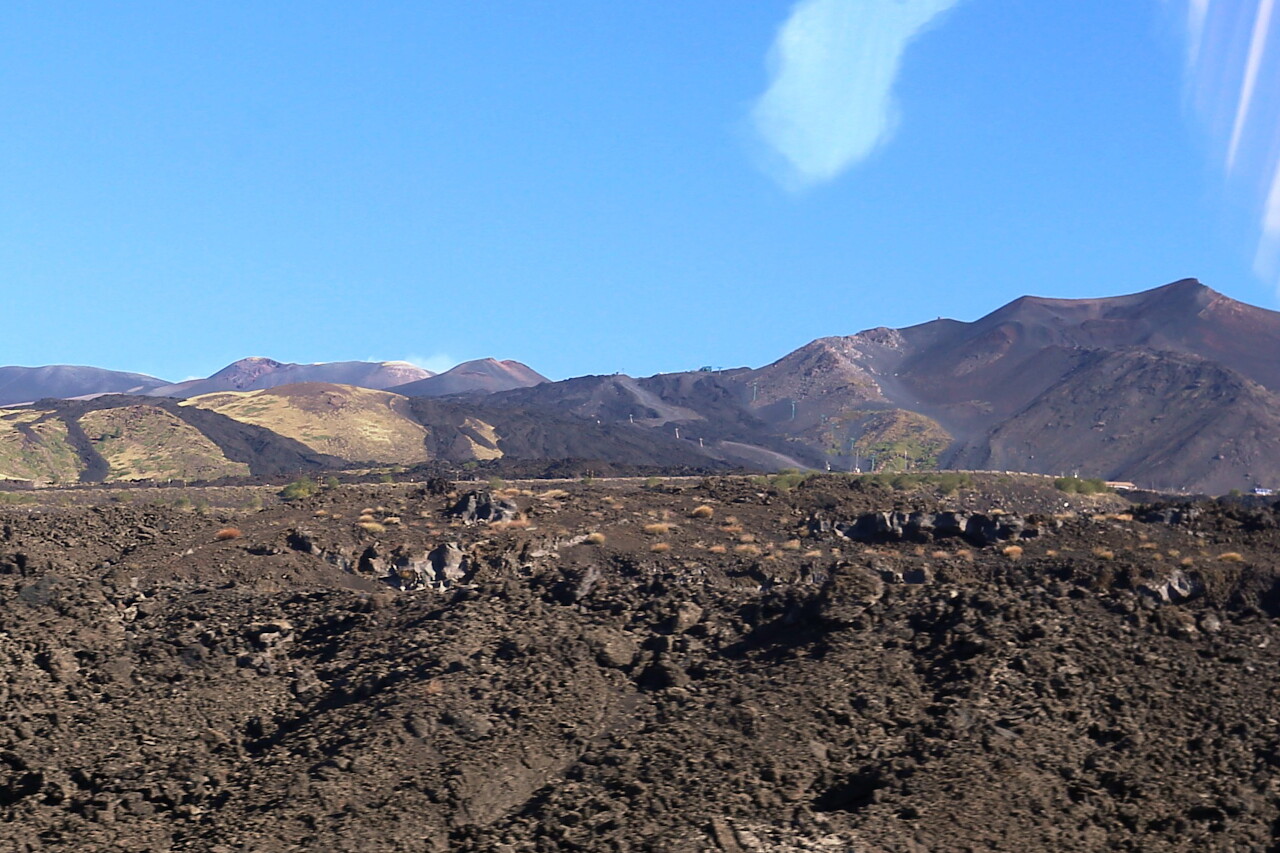 In the afternoon of April 1, the flood was already at an altitude of 1,550 meters, destroying several roadside restaurants and mountain hotels. On the evening of March 31, two crevasses form at an altitude of 2,700 meters, from which volcanic ash is ejected, indicating that the eruption is ending. 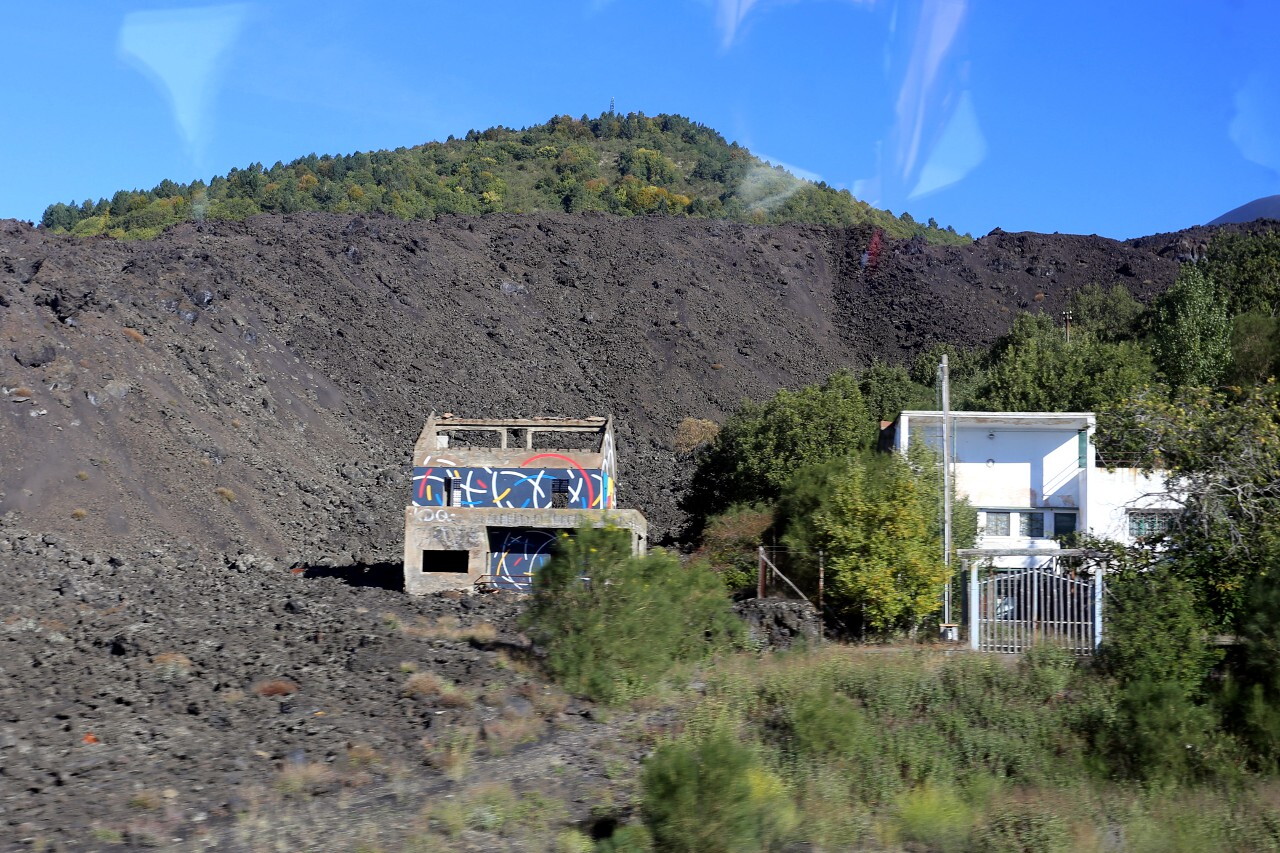 But at 21: 00 on April 9, a large mass of lava falls several times on Rifujo Sapienza. On April 12, the streams reach Monte Vetore, and on April 16, the main lava covered the old Casa del Bosco farm. In the evening, the speed of lava movement accelerates and by April 22, one of the branches reaches a height of 1,100 meters, threatening Nicolosi, Belpasso and Ragalno. By that time, most of the agricultural land was under the lava masses, depriving a significant number of farmers of a source of livelihood. 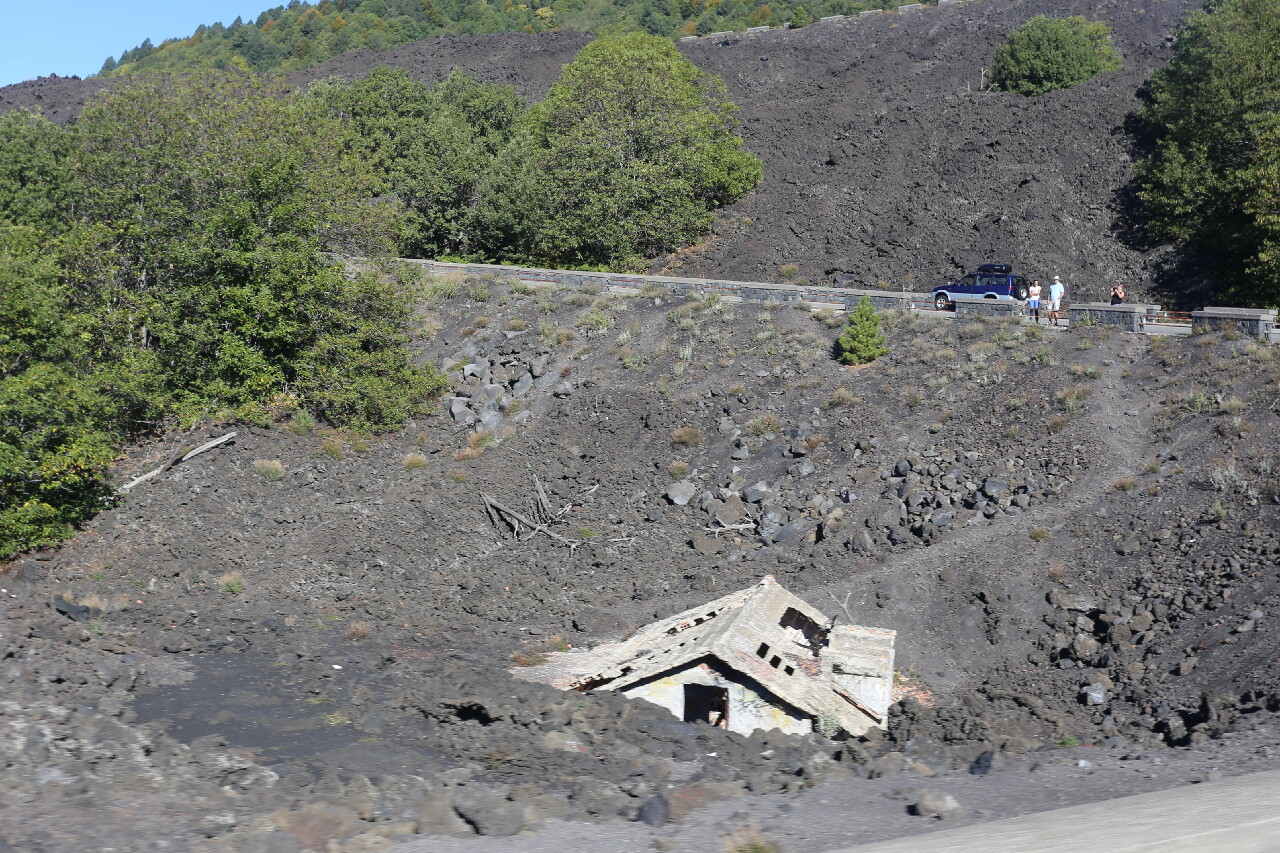 On April 28, it was decided to divert the lava flow. To do this, with the help of directional explosions, an obstacle was formed in the path of the fire stream, which was supposed to turn it into a channel dug by bulldozers. The preparation of the operation took more than 10 days, absorbed a lot of funds, but did not give the desired result. 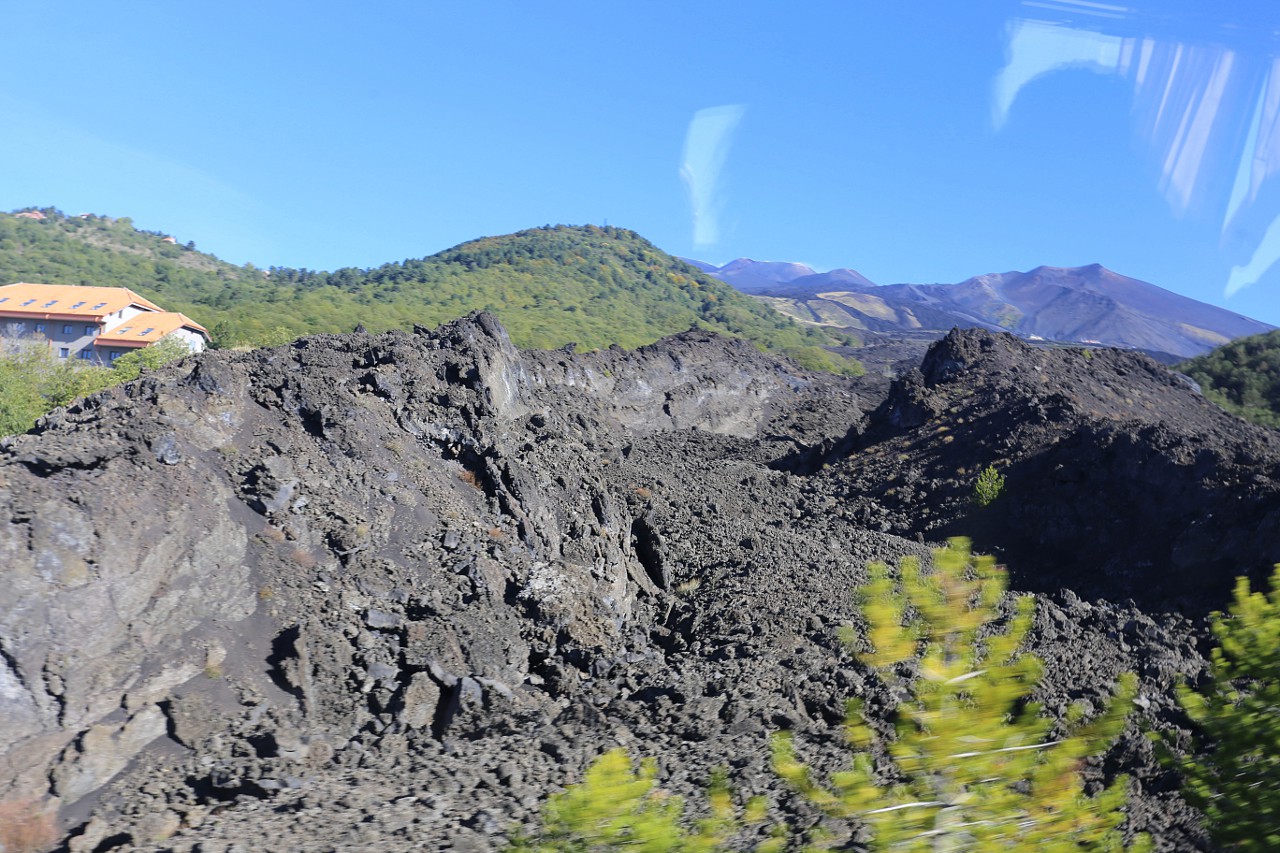 The eruption completely ended on August 6, 1983, with lava flows descending to a height of 1,150 meters. This is the first time in history when a person tried to resist the underground element.

At one of the turns, black lava flows can be seen on the green-covered slopes, and closer to the top, you can see two rows of cable car supports - the old one destroyed by lava and the new one built after the eruption. 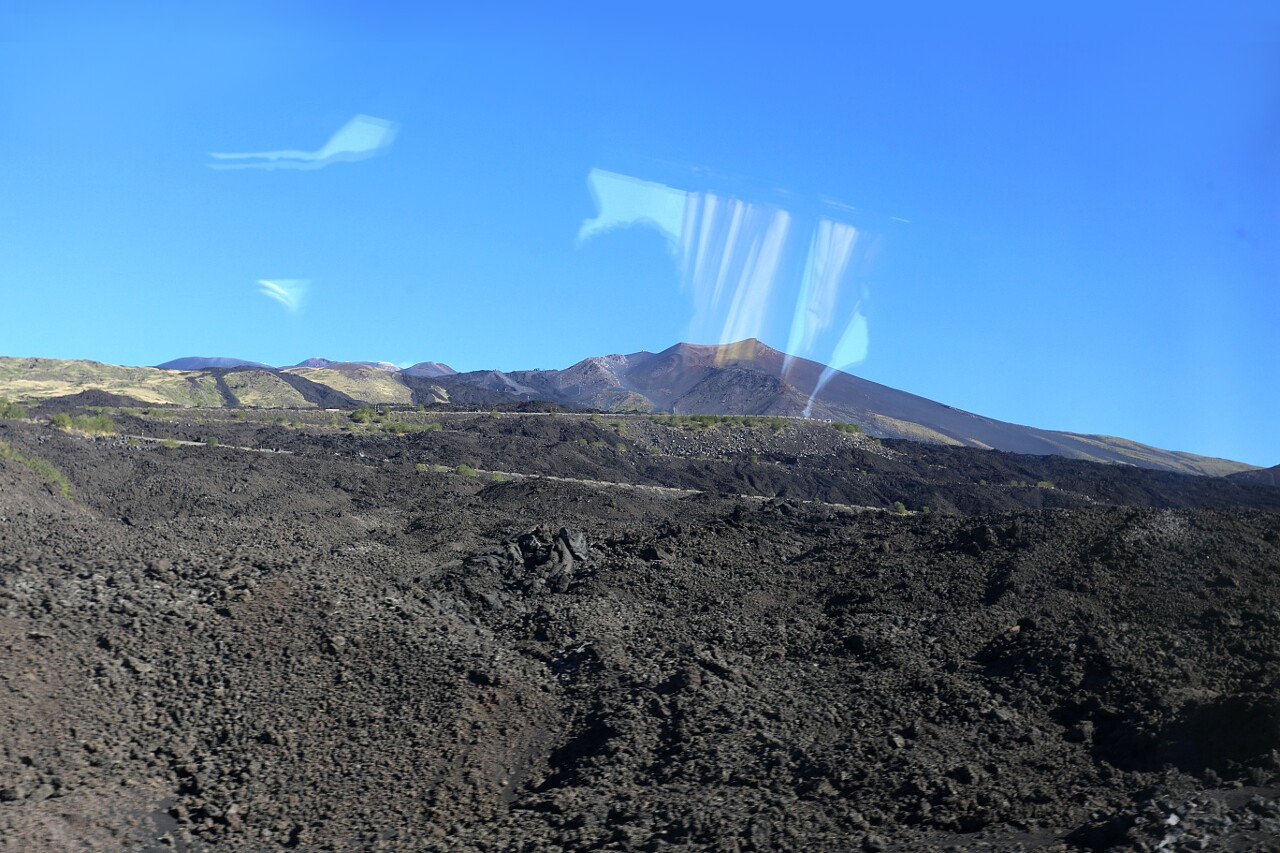 The road in many areas was also flooded with lava, sometimes reaching a height of 5-6 meters, now it passes in recesses lined with blocks cut from the frozen products of the eruption. 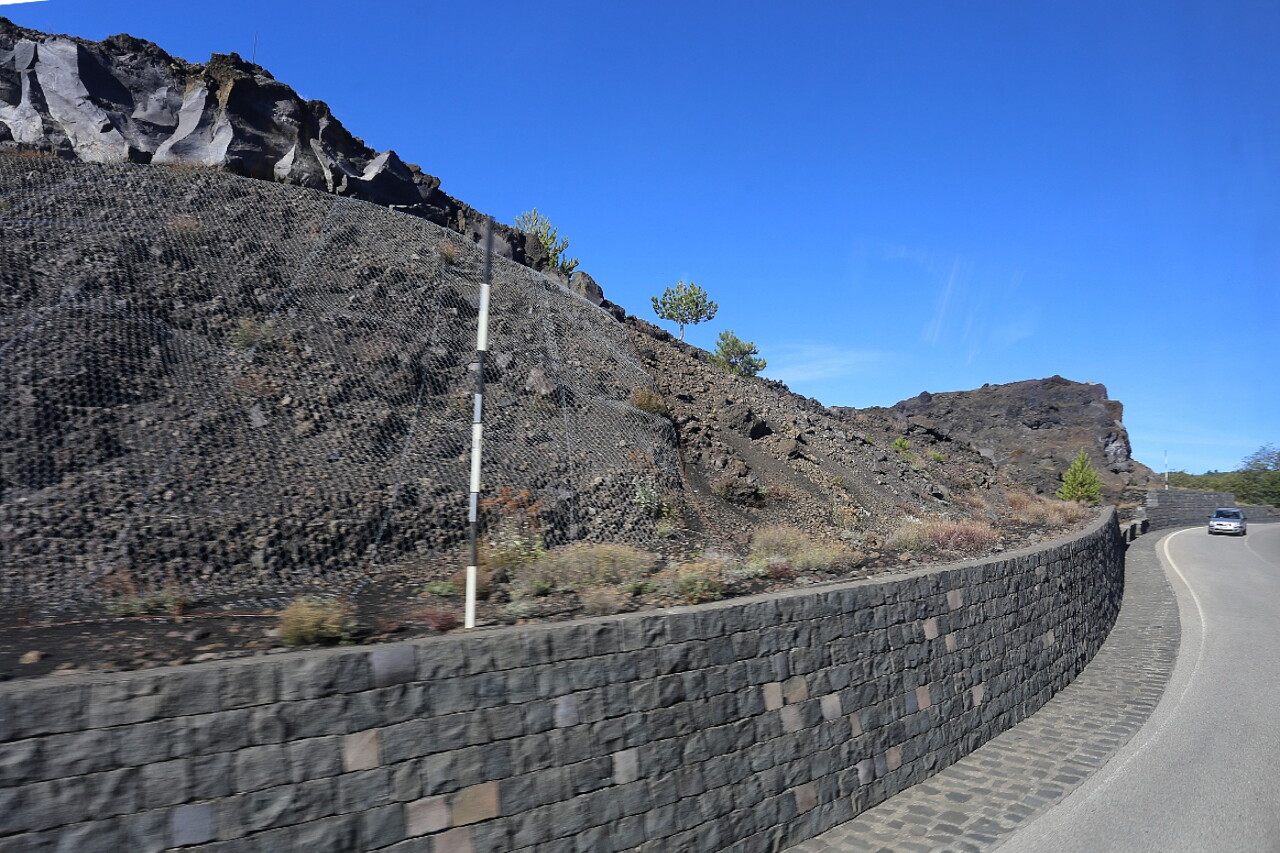 At one of the turns of the serpentine, the road goes to the Mario Fracastoro astrophysical Observatory, located at an altitude of 1720 meters. The Sierra La Nave Landscape Park is located around the observatory. 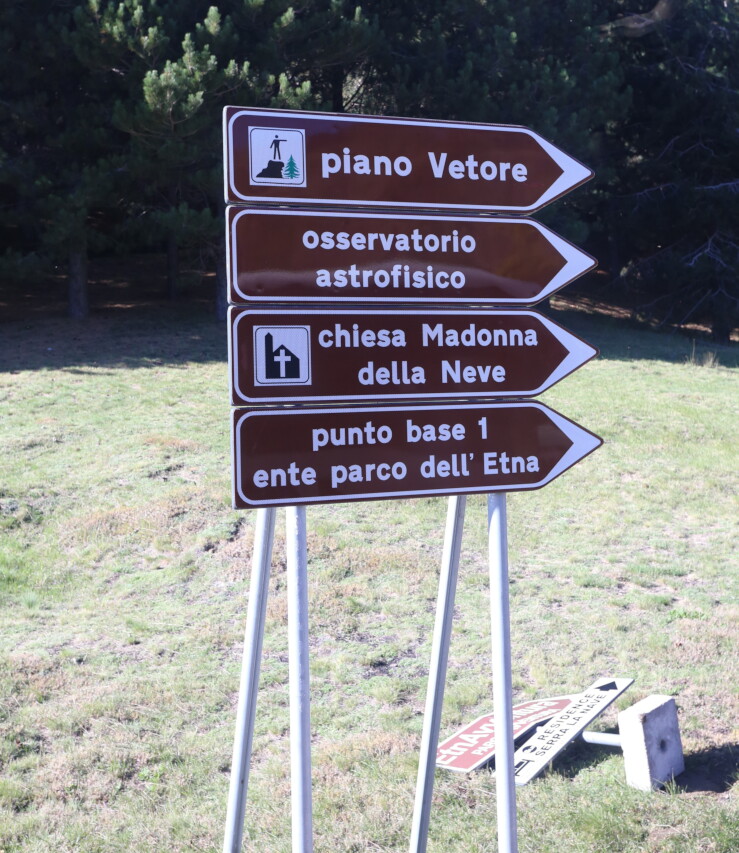 Then we drive along the slope of Monte Vetore with a height of 1831 meters, its top is a popular viewing platform. Trekking enthusiasts can go up there on a hiking trail. 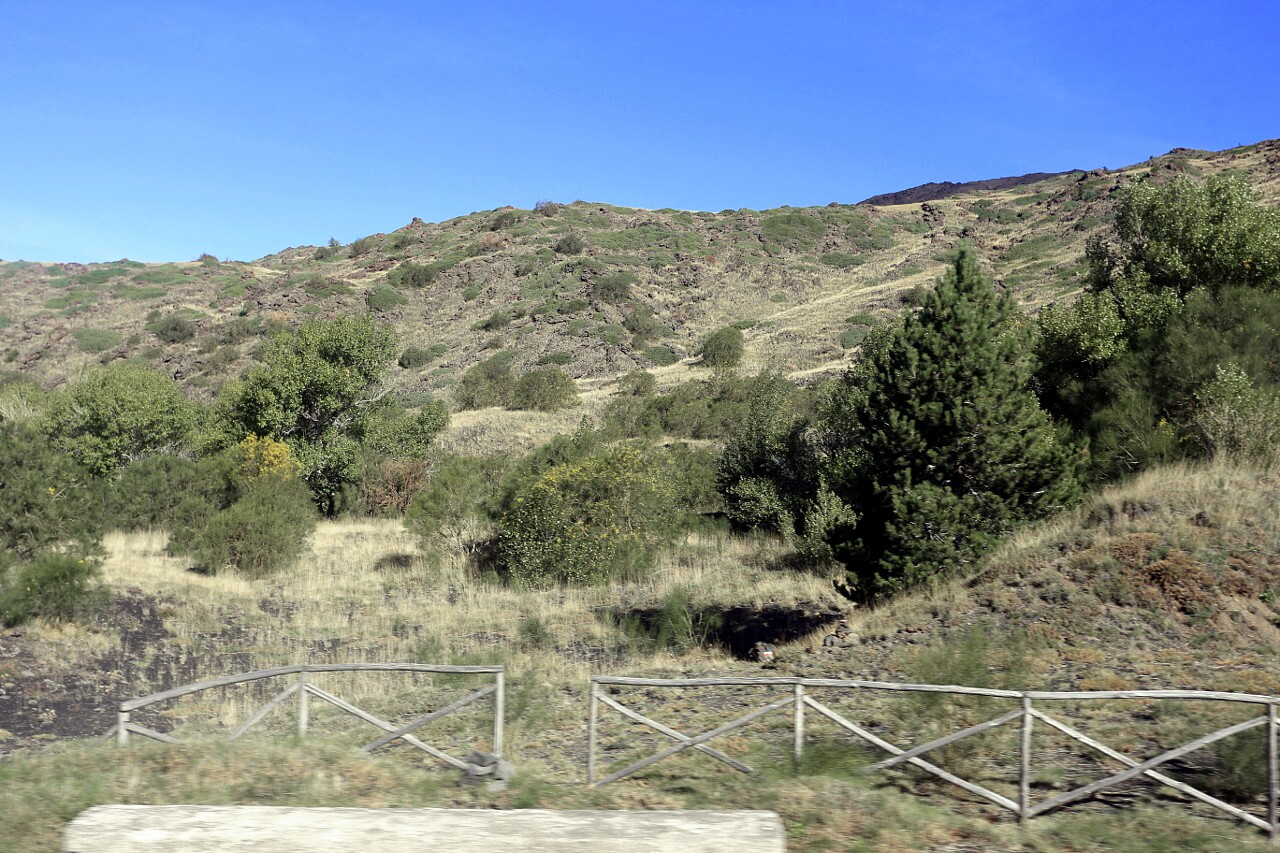 After the next turn, you can see Monte Vetore in all its glory. 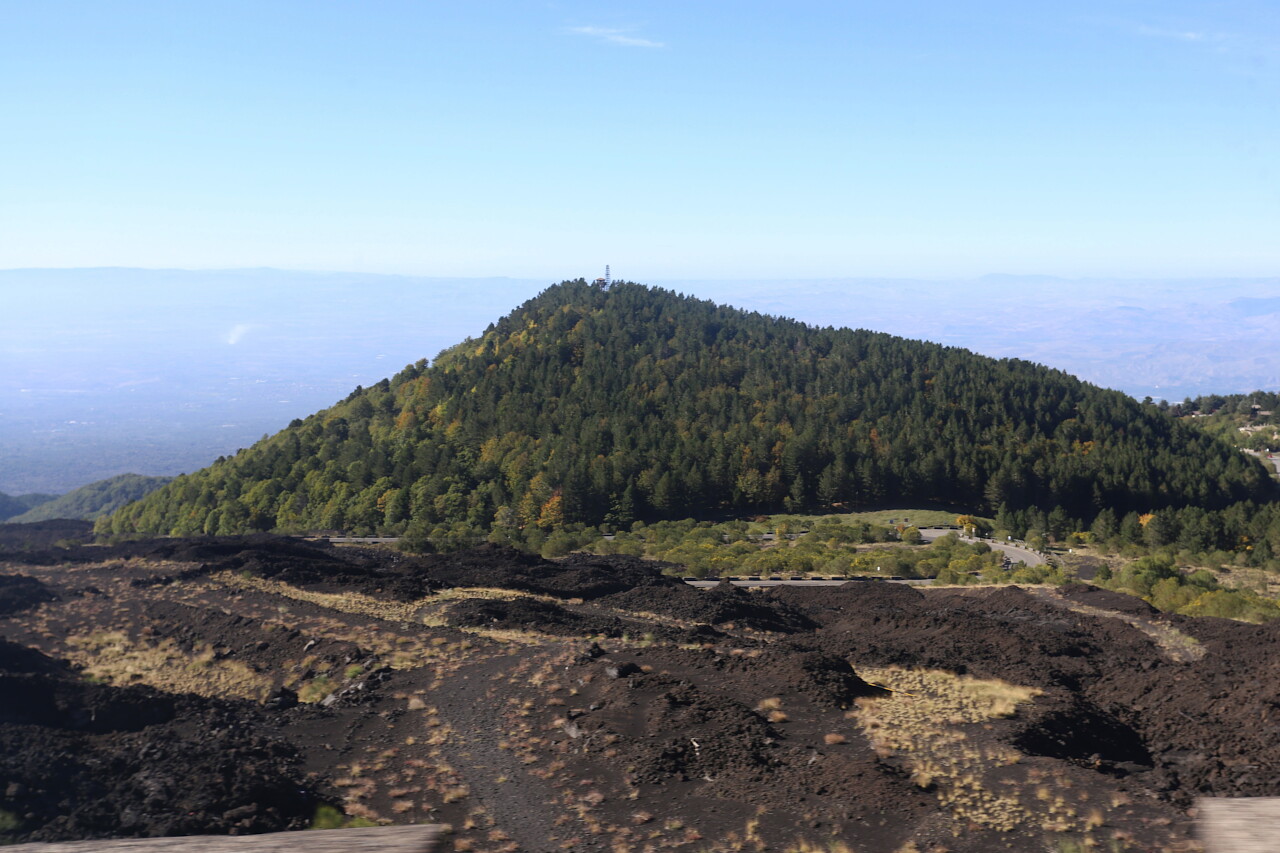 Well, our trip is coming to an end, we are already on the outskirts of the village of Rifujo Sapienza, which is located at an altitude of 1900 meters above sea level. From here, we will have to climb the cable car, and then go to the top on an off-road bus. 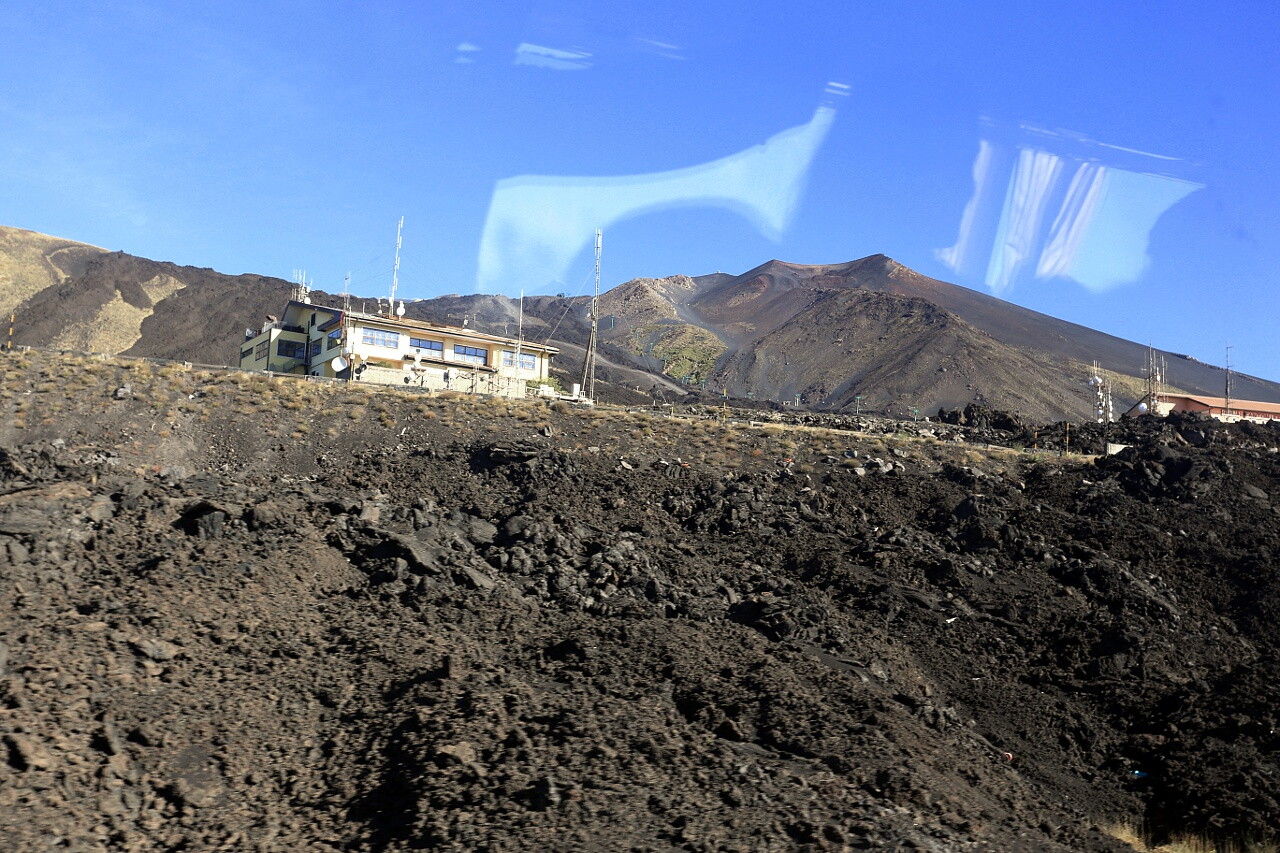 Before continuing with the story of the ascent to the top, I will say a few words about the way back to Catania. The bus that brought us was waiting for the return trip on the outskirts of the village, and the smartest tourists had already taken seats there. Therefore, when the bus arrived at the departure point, half of the seats were already occupied. The landing was typical for Italy-a jostling crowd, although most of the tourists were foreigners. No one wanted to ride standing up. I didn't get a seat this time. The driver checked the tickets, and first of all let those who had a round-trip ticket, only then began to sell tickets to others. But, in the end, everyone left. 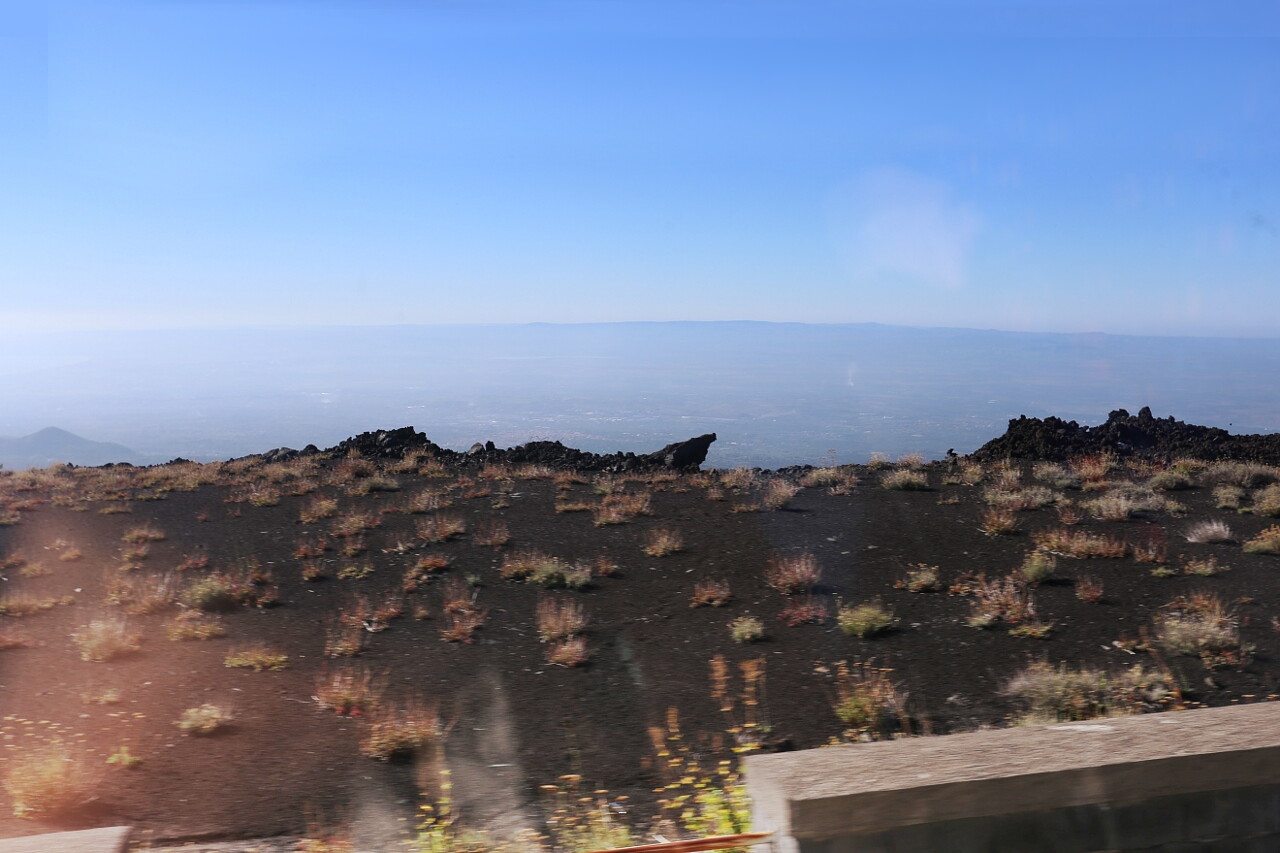