Capo d'Orlando. Path to the top of Monte della Madonna

Orlando cape, far out into the Tyrrhenian sea, is crowned by a rocky hill about a hundred meters high, visible from any point of the city. 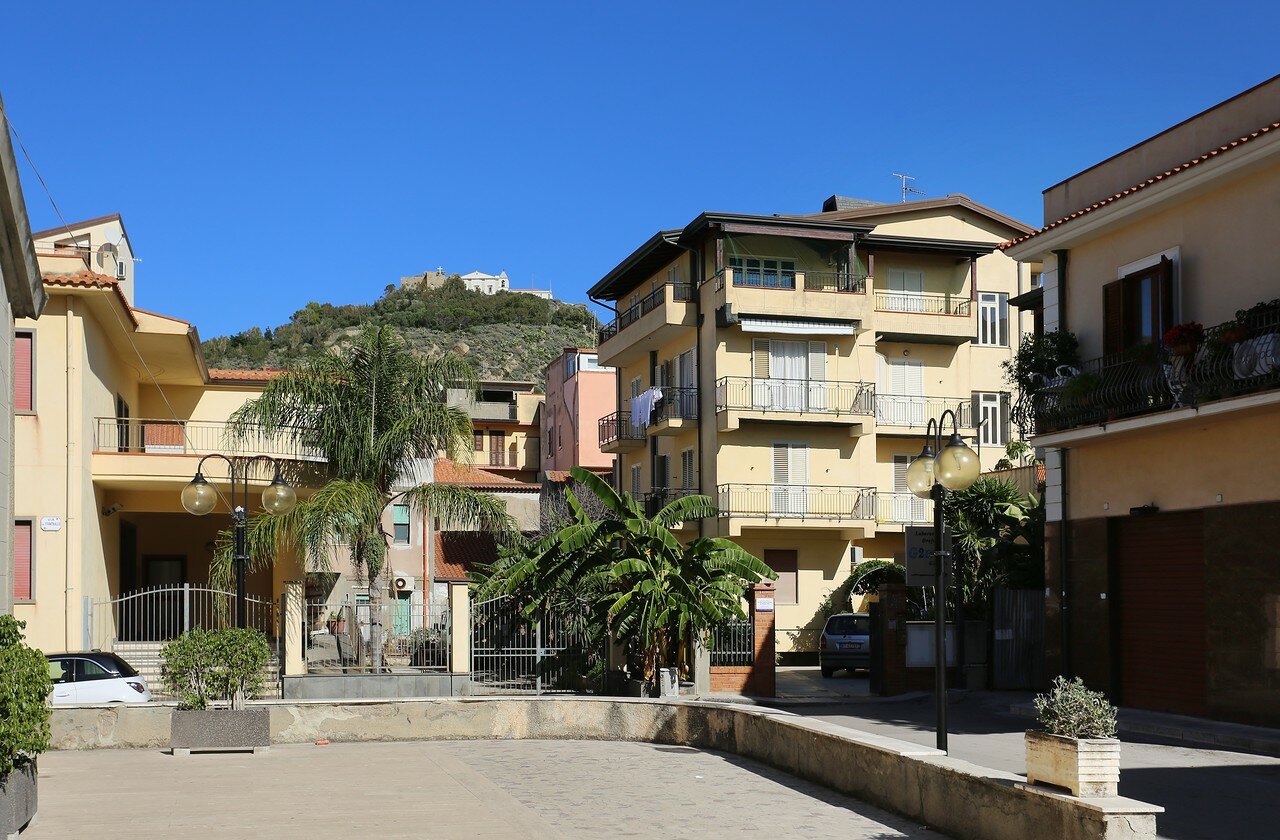 At the top of the mountain, named Monte della Madonna, are the ruins of a 13th-century castle and the Sanctuary of Saint Mary. These are the main attractions of the city, and from the station I first went there. A wide staircase leads to the top. 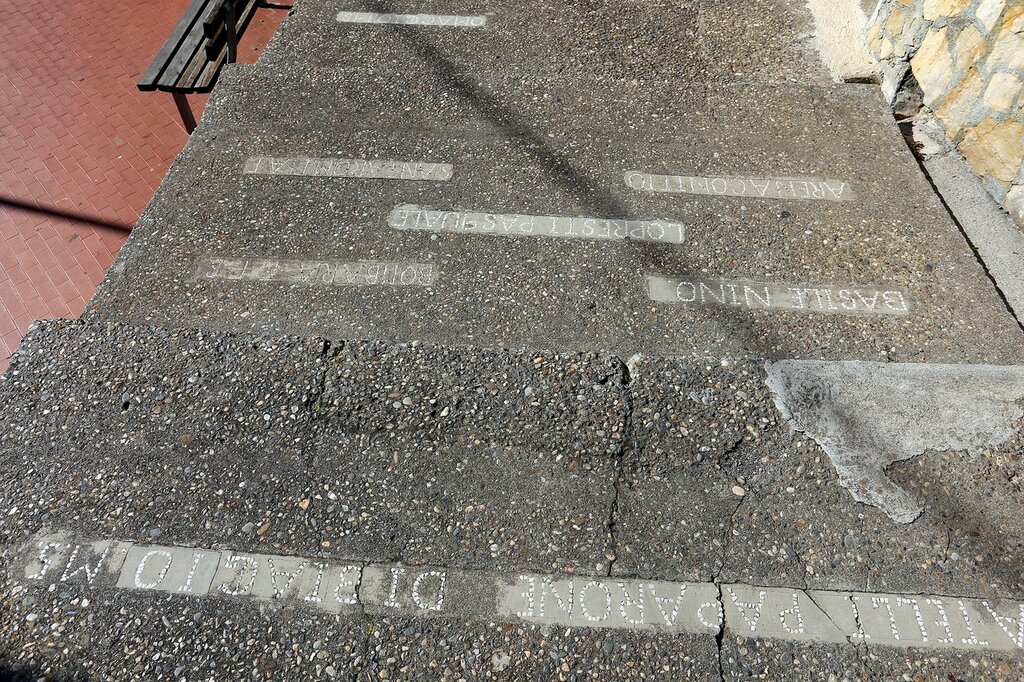 At the entrance to the stairs on the steps you can see the names laid out with stones, as I think - memorial tablets. 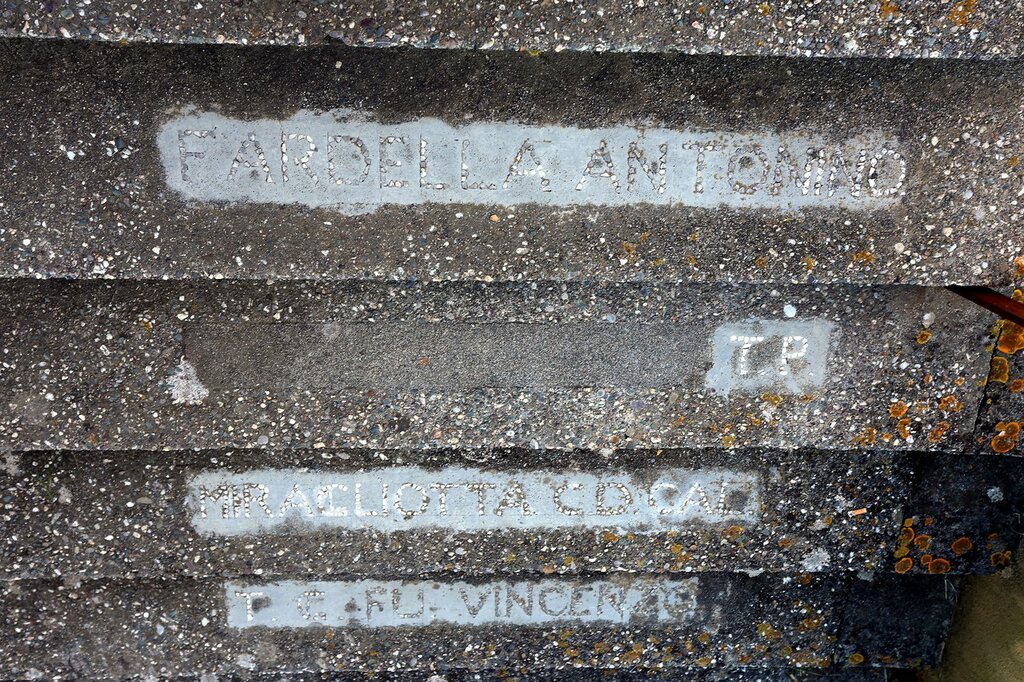 Since I visited Capo d'Orlando on the way from Cefalu to Messina, stopping here for a couple of hours, I had to carry all the luggage, including the mountain. Of course, there was no luggage storage at the Capo d'Orlando railway station, since in Italy they are only available at stations in large cities and, by the way, for a completely insane price. There was a faint hope of leaving the backpack at the tourist information center (it is located on the waterfront, a hundred meters from Monte della Madonna), but I found it closed because of the resurrection. When I reached the first landing of the stairs, which was shaded by trees, I rested a little, and trudged up under the scorching sun. I must say that while I was crawling to the top, puffing on each platform, some local resident, not at all like a physical athlete, made this route three times back and forth without stopping. 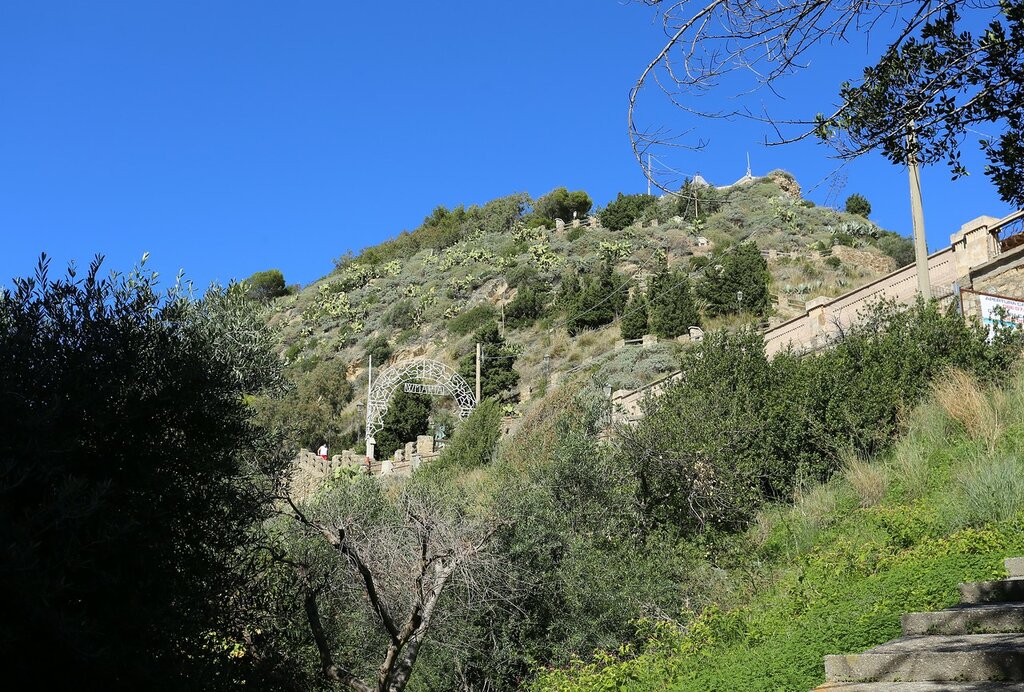 The path to the top begins under an openwork arch - you can get here by car, Via del Porto. 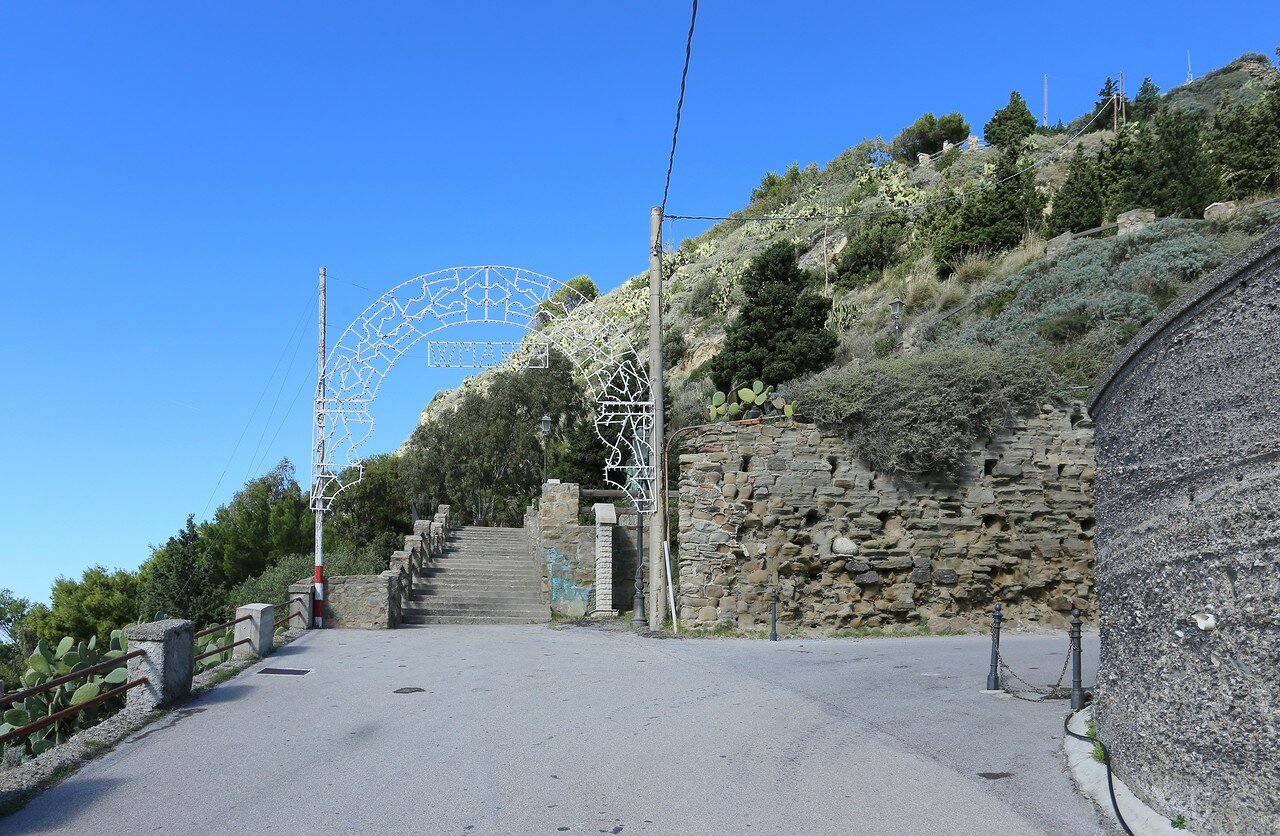 To the right of the arch there is a small Parking lot, where you can see an old steam engine-these were used in the late 19th and early 20th centuries in sugar factories. Capo d'Orlando was one of the centers for the production of sugar. 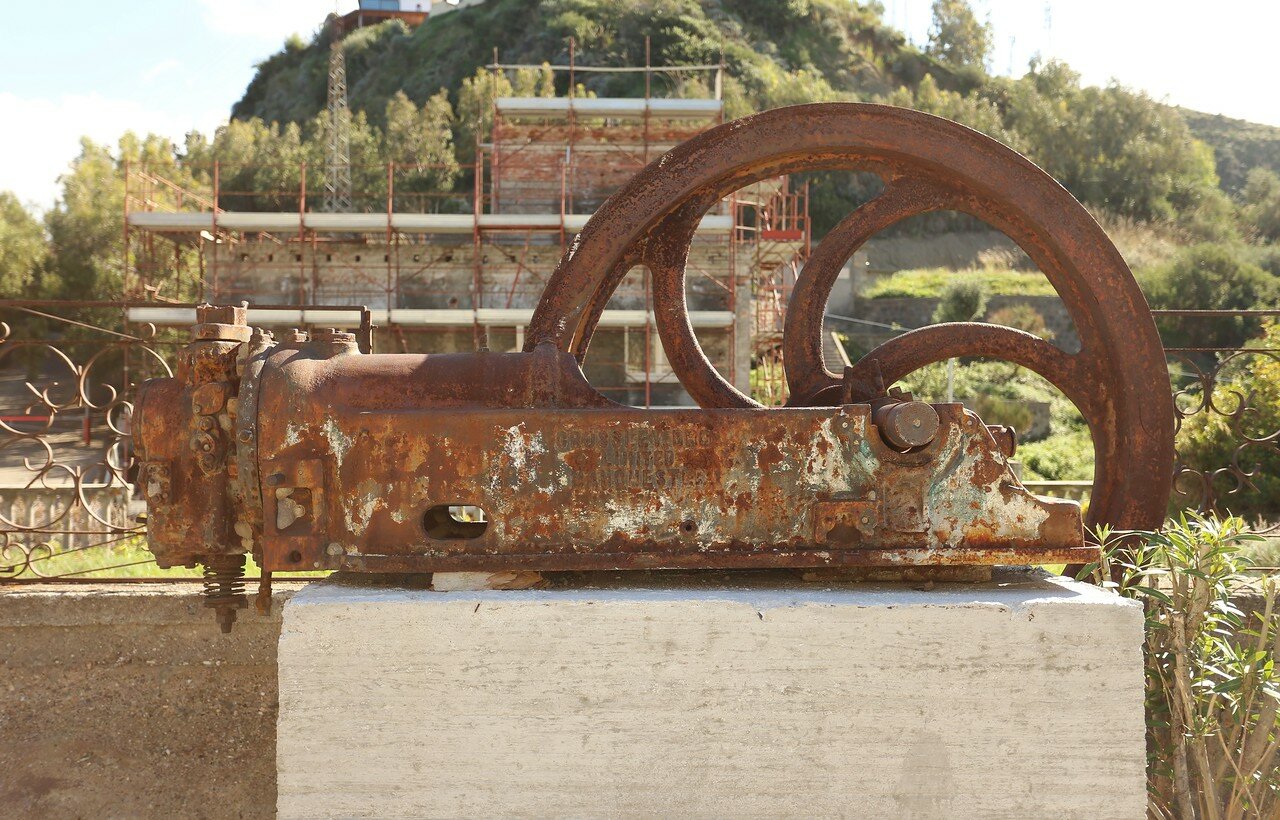 There is also an old wrought-iron gate that leads to a grassy wasteland - all that remains of the Villa that once stood here. 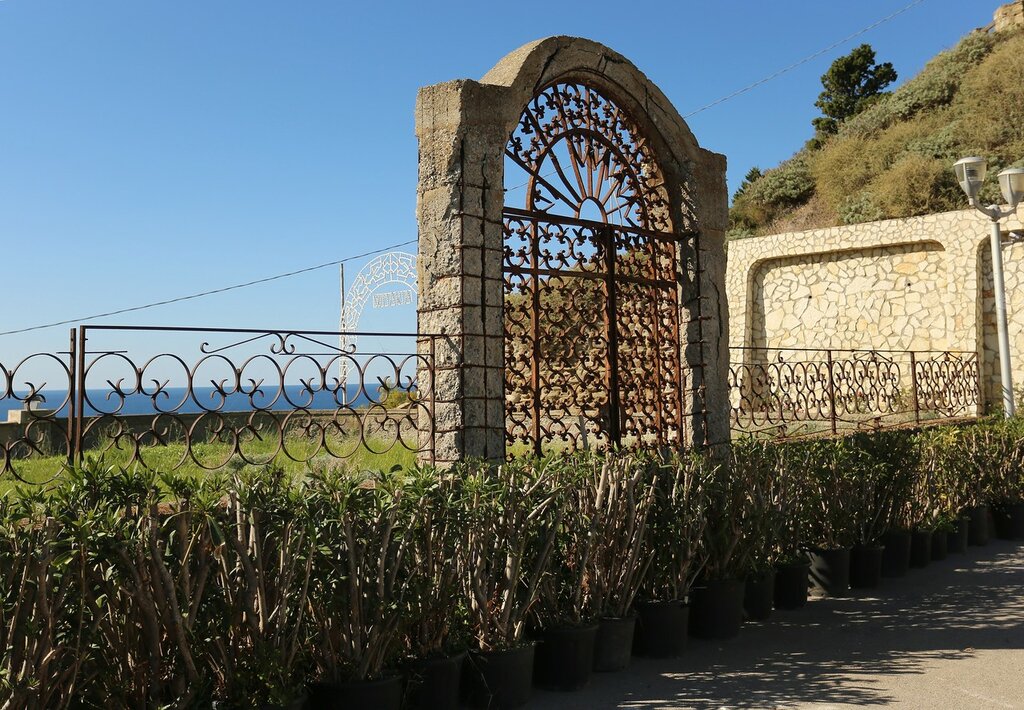 From the car park, you can admire the chain of Aeolian Islands that stretches along the horizon. And the steep mountain slopes facing the sea to the East of the city. 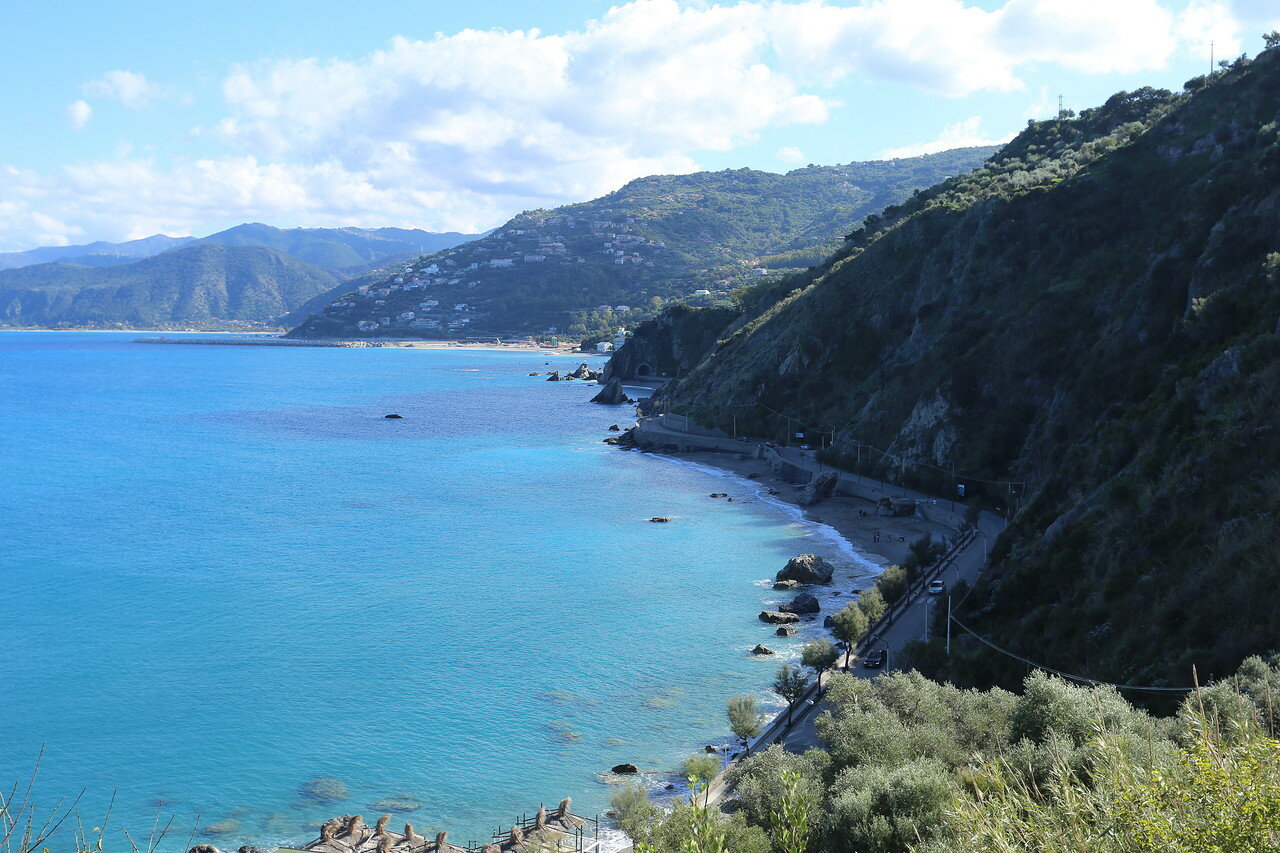 The mountain is constantly exposed to wind and rain erosion, which threatens the road that surrounds it, so its slopes have been strengthened since ancient times. 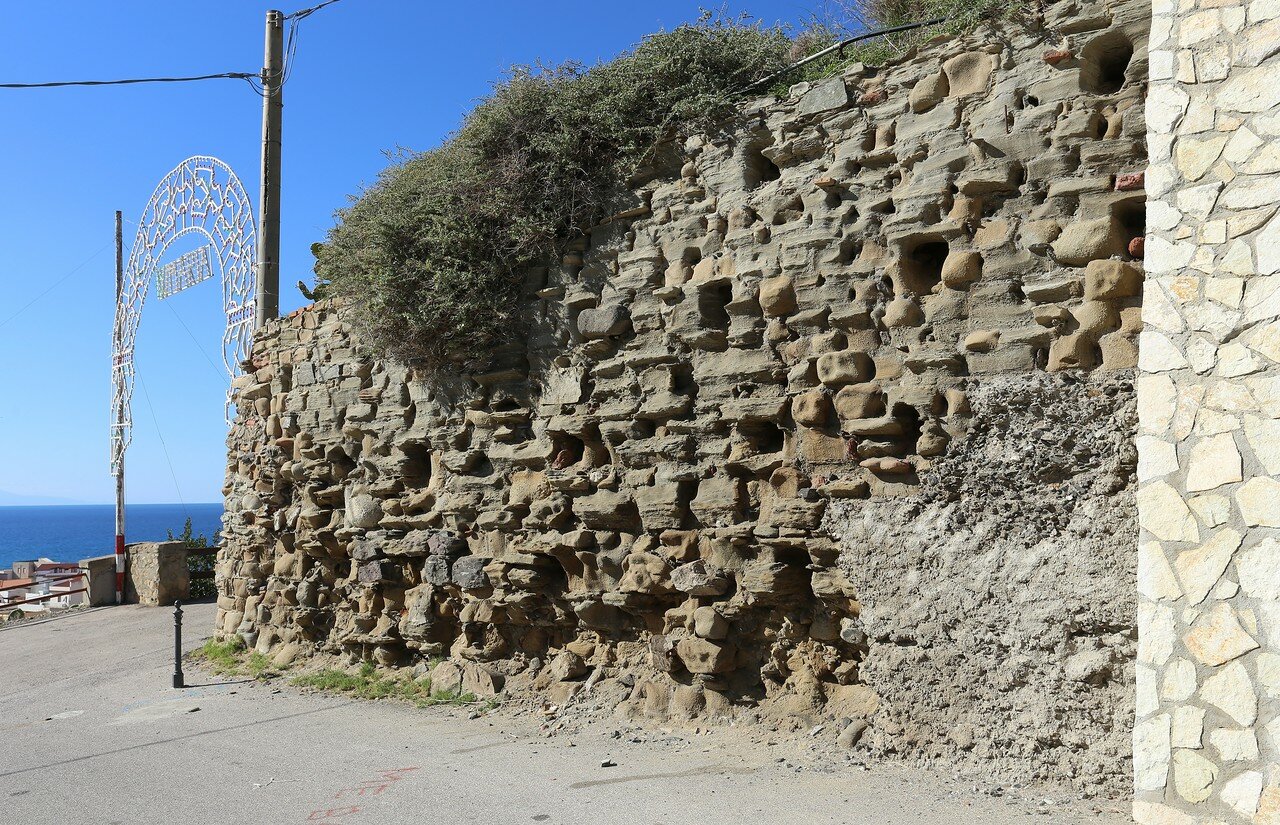 Numerous niches in the element-hewn wall probably had some purpose. Obelisks with bas-reliefs depicting biblical scenes are installed on the platforms of the stairs leading to the top. 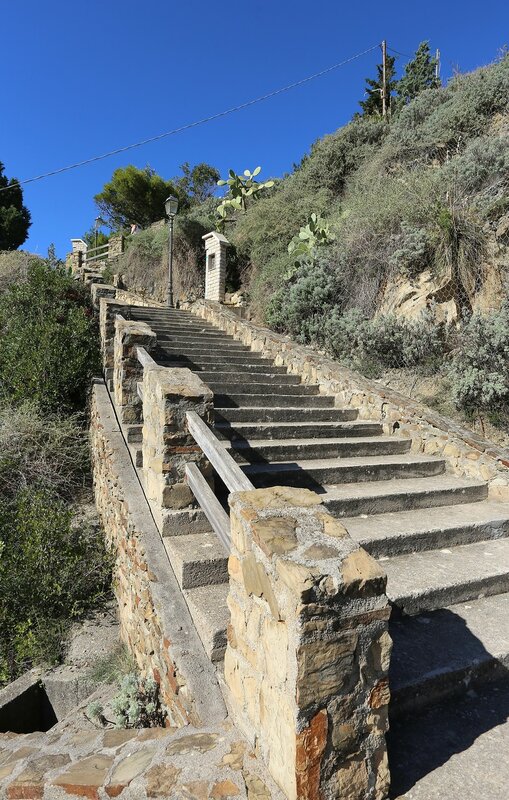 In the lower part of the monuments you can see signs "in memory of FR..."this is probably how the memory of the people who spent their money on the construction of the stairs is perpetuated. 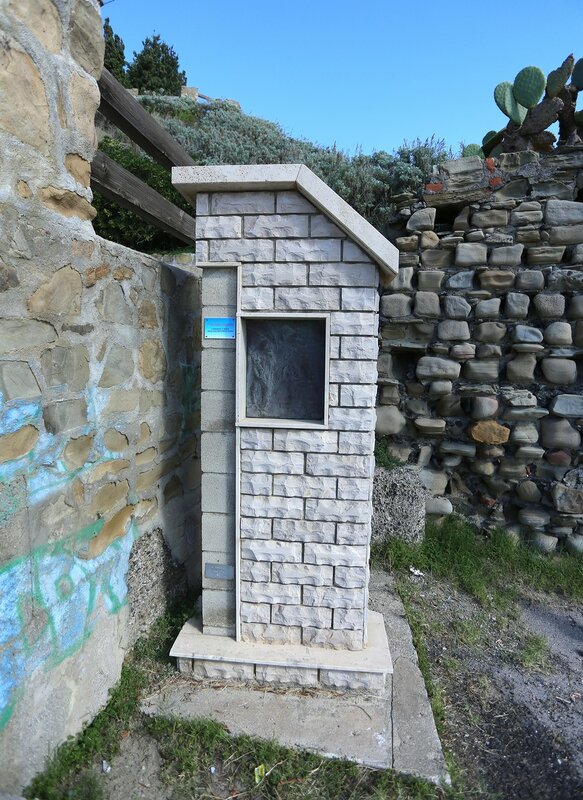 Bas-relief depicting the scene of the birth of Jesus. 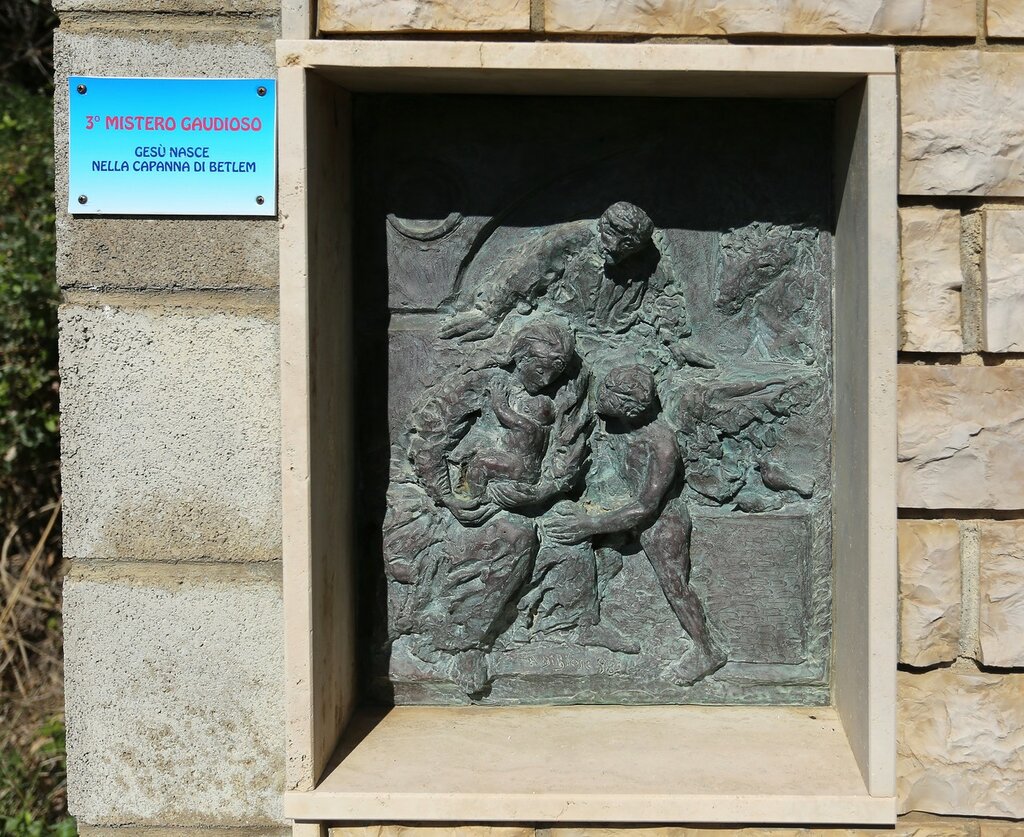 This bas-relief depicts a story from the gospel of Luke 2: 41-52, the boy Jesus was lost, then found in the temple. 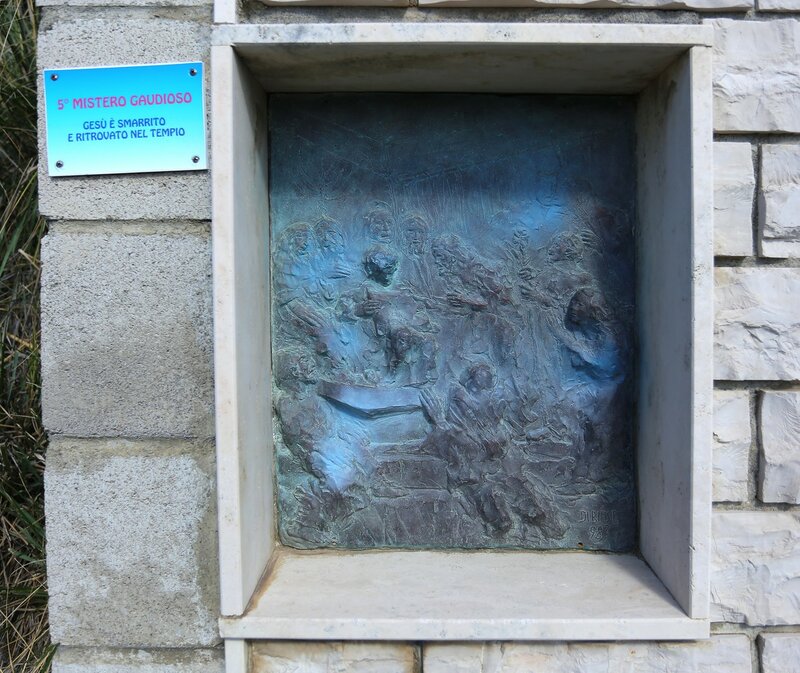 On one of the sites there is a monument to Saint Kono of Naso, who, according to legend, brought to this place a wonderful statuette of the Virgin Mary. 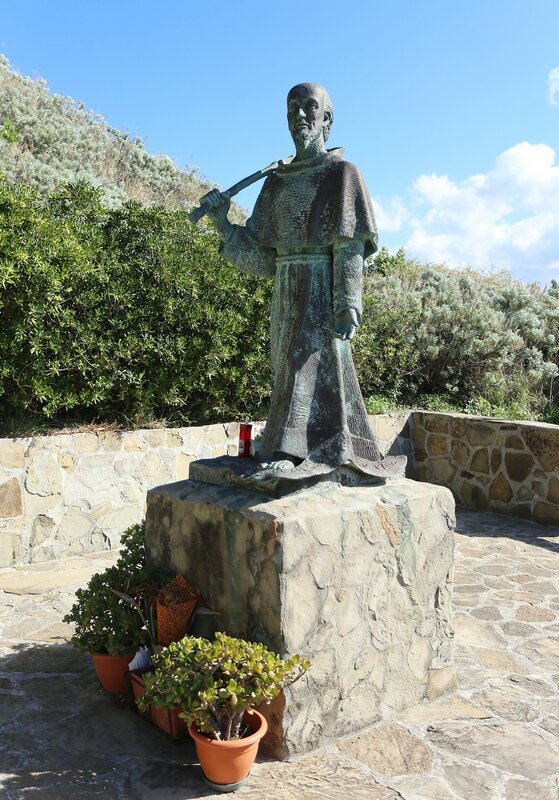 On the way to the top of Monte della Madonna, you can enjoy a beautiful view of the San Gregorio Bay. 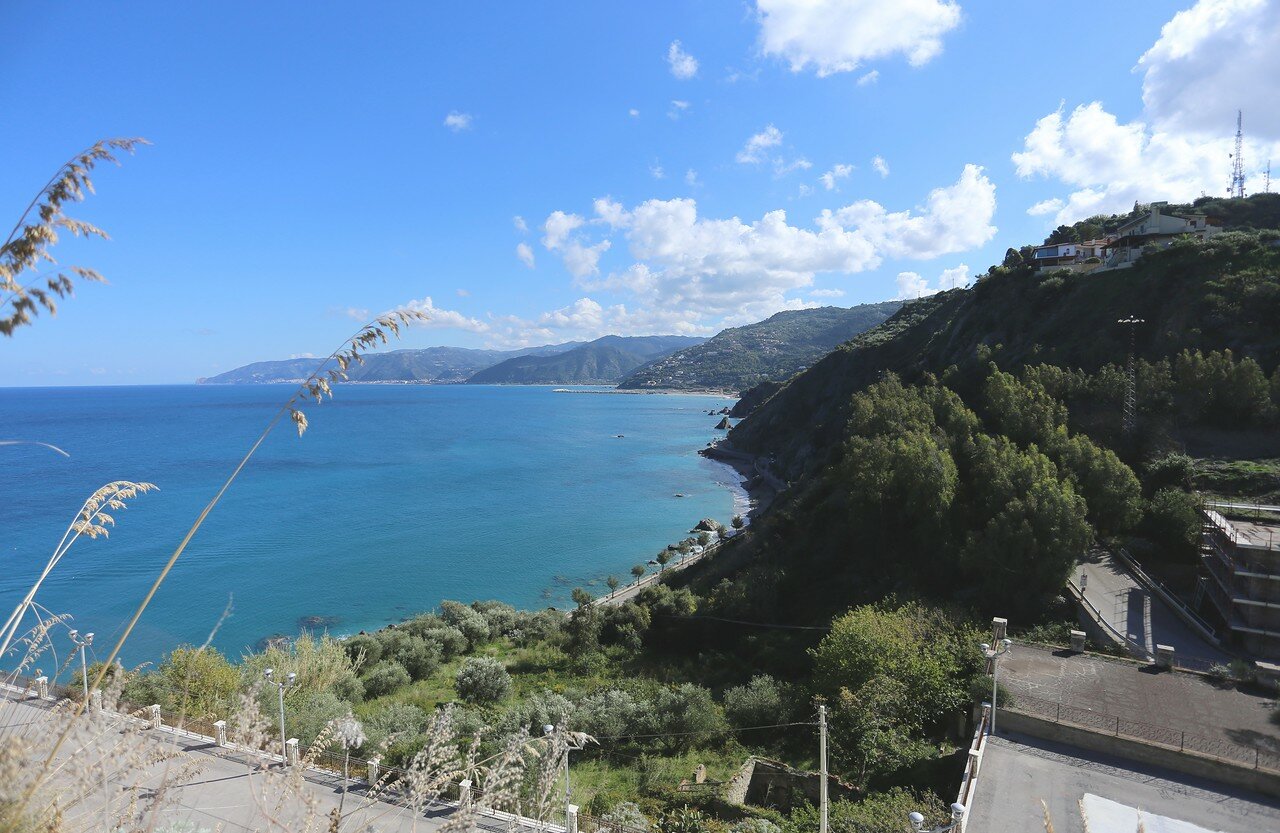 And the Calavo cape. 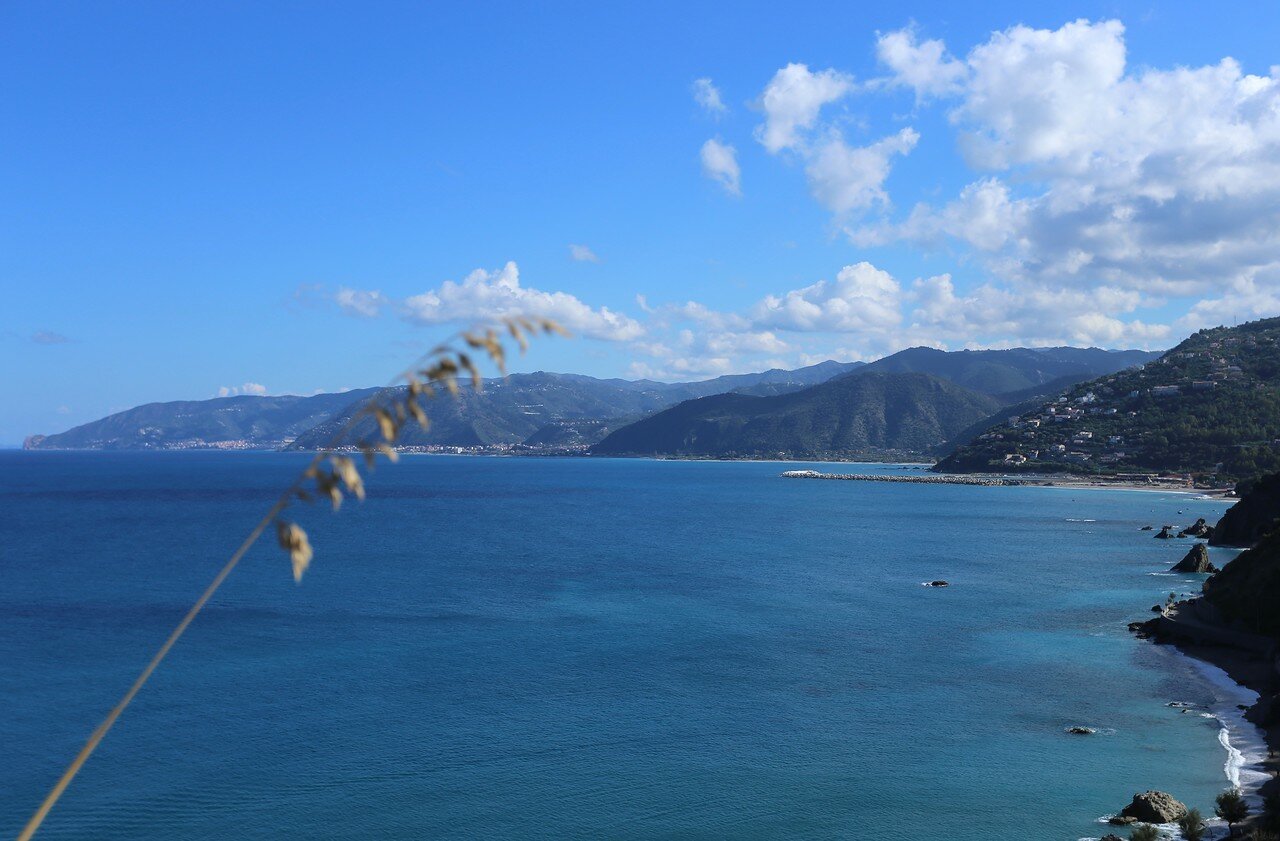 If you look to the west, you will see the city's beaches. 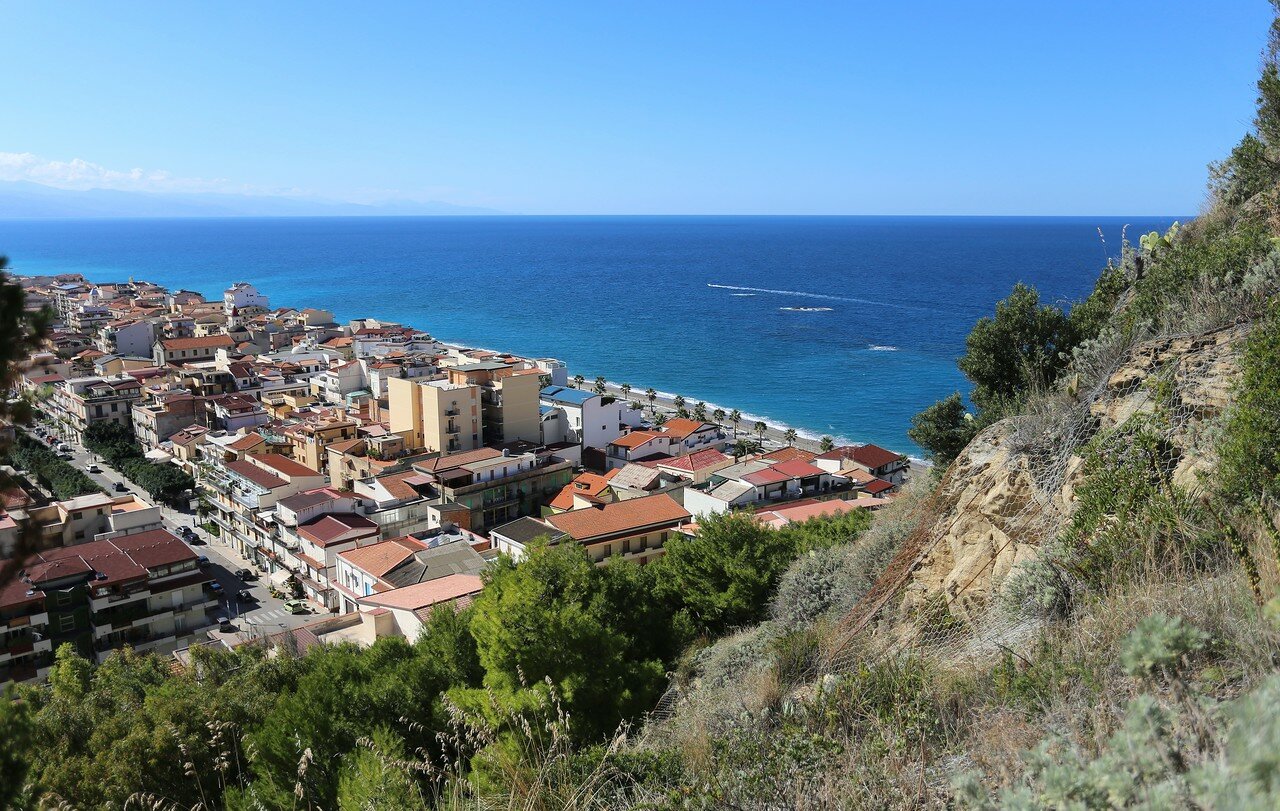 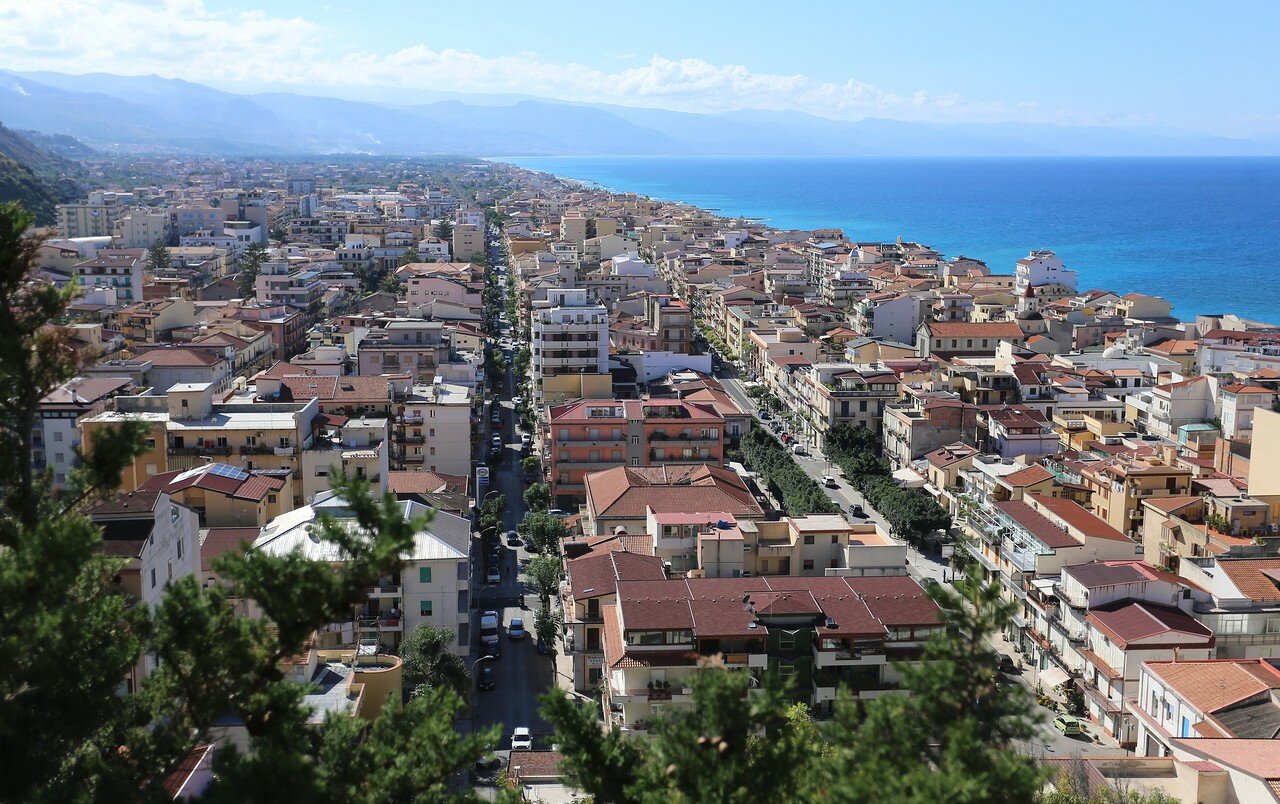 In the distance, in the blue haze, you can see Cape Cefalu. 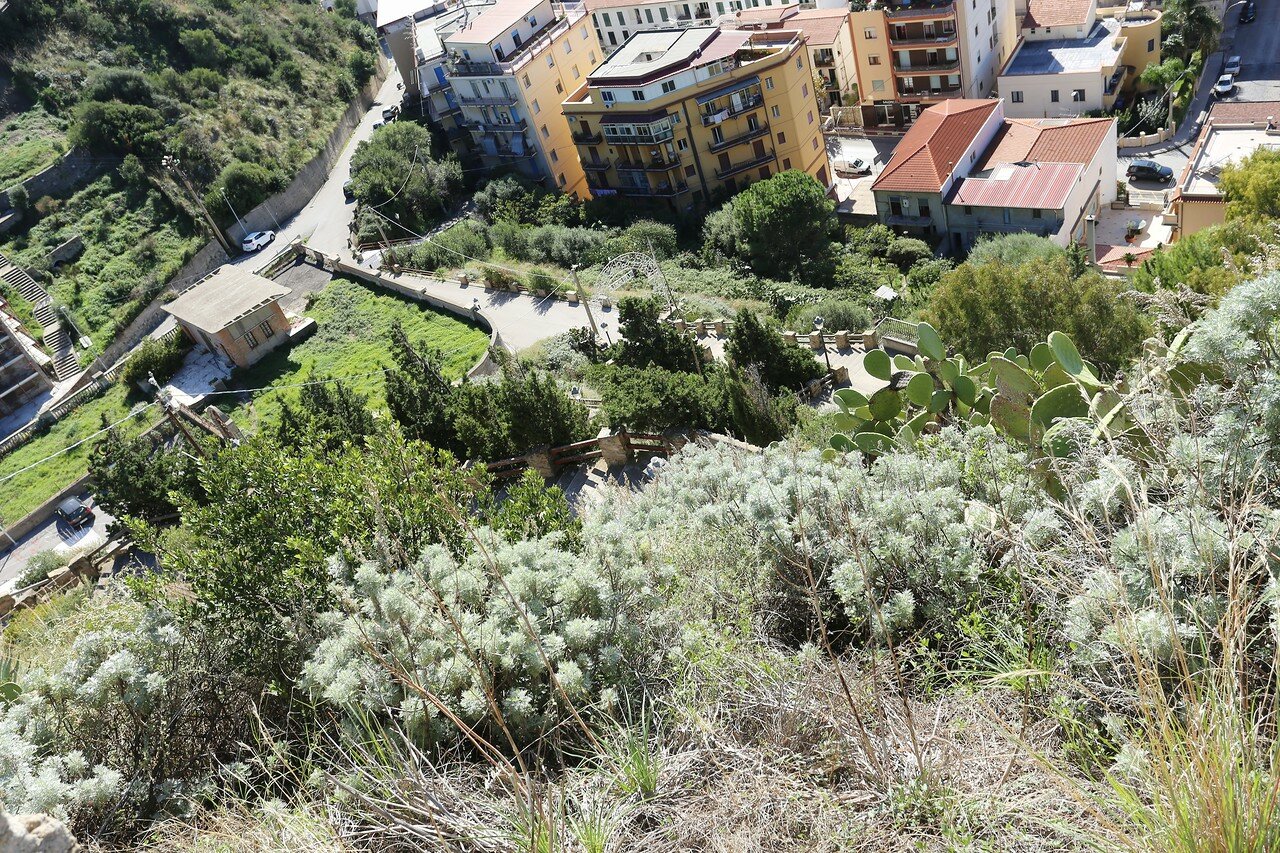 Another flight of stairs and I'm on the top, near the ruins of the Chateau d Orlando. 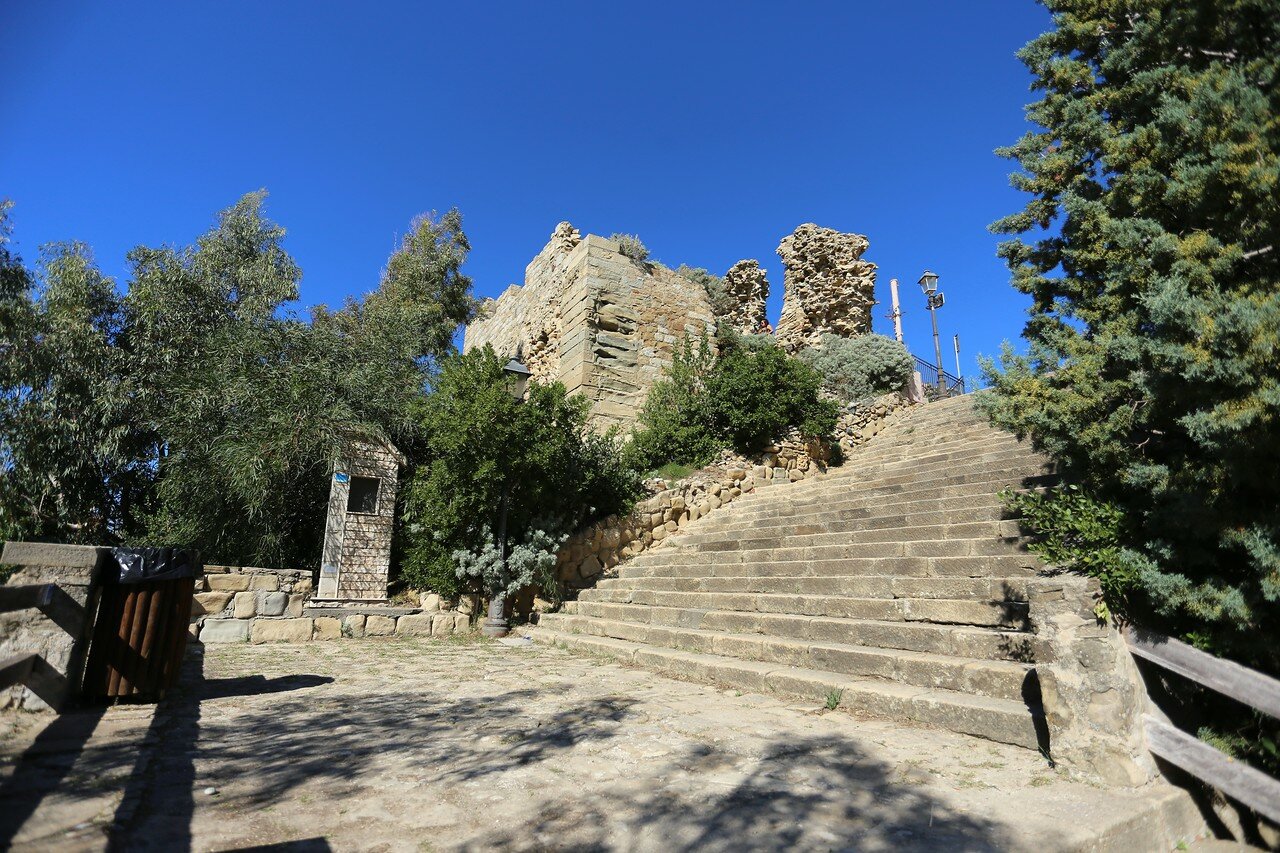