The Flyvefisken-class ship Y311 Søløven ("Sea Lion") was built at the Danyard shipyard in Aalborg and launched in May 1995, joining the fleet in May 1996. Ships of this class have an innovative modular design StanFlex, in a standard hull can be placed containers with weapons and equipment for various tasks. In the patrol or strike version, these ships have a 76mm OTO Melara automatic gun, can carry 8 Harpoon anti-ship missiles and 12 Sea Sparrow anti-aircraft missiles, 4 MU90 ASW torpedoes to fight submarines, can act as a minelayer or minesweeper, and monitor environmental pollution. It takes no more than two days to replace the containers. 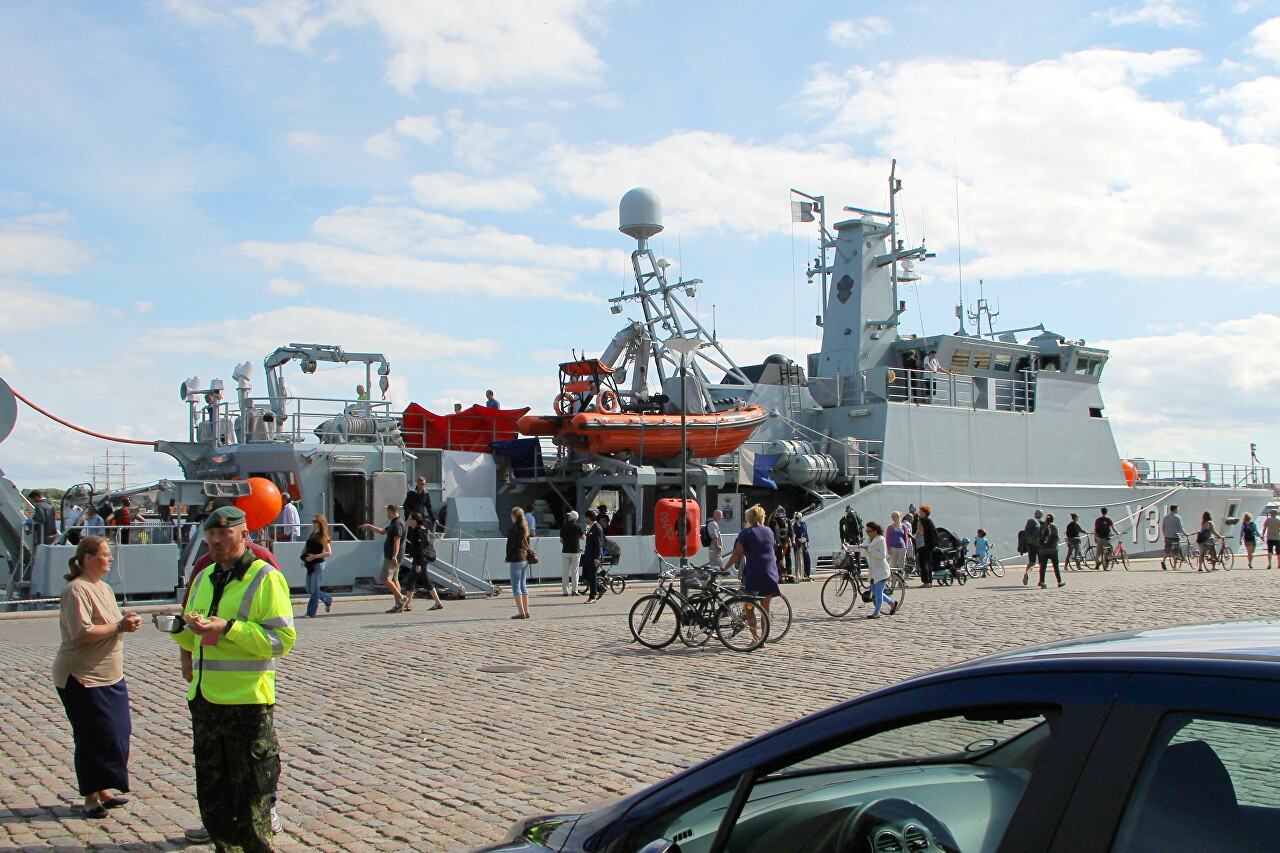 The power plant is made according to the combined scheme (CODAG), consists of a gas turbine with a capacity of 5500 hp and two diesels of 2880 hp, each unit works on its own screw. Maximum speed 30 knots, range up to 3,860 nautical miles. 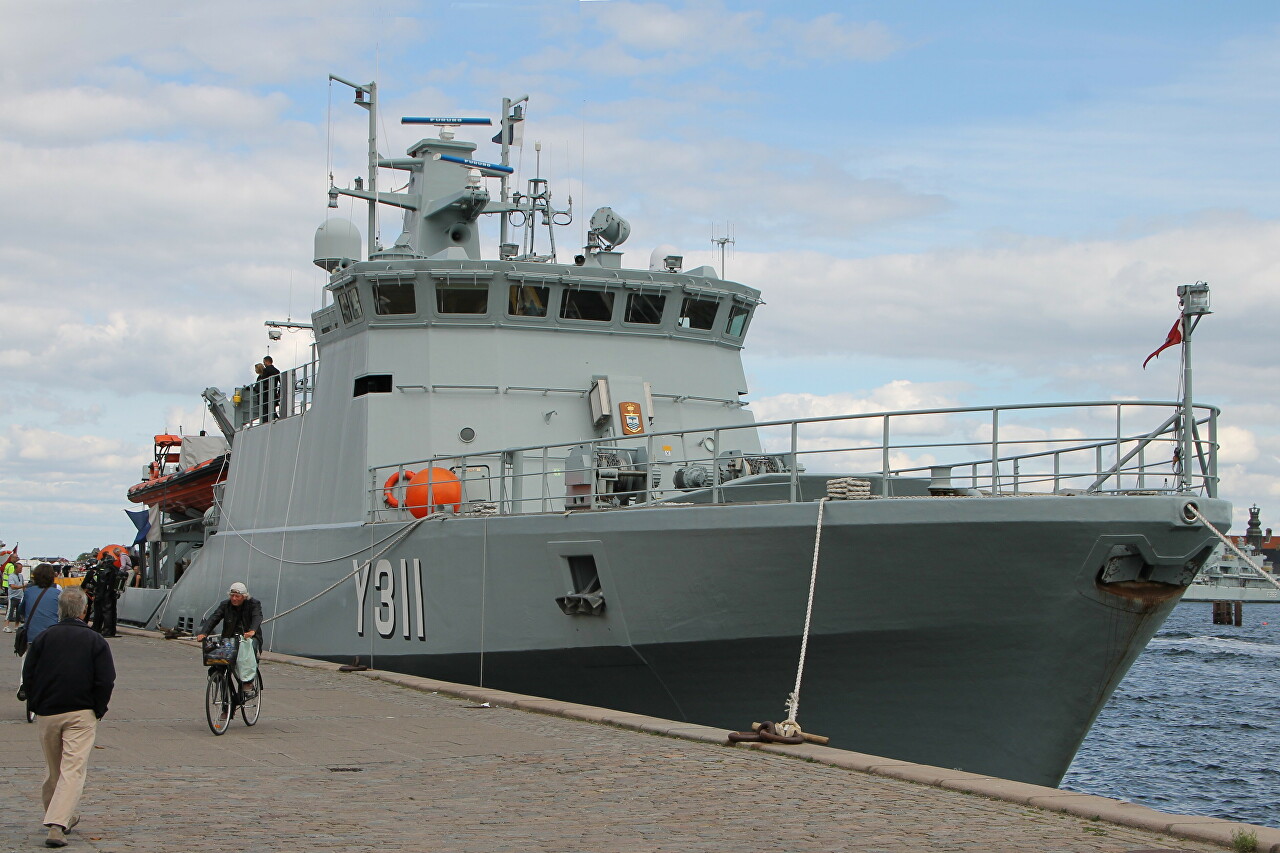 The ship's length is 54 m, width: 9 m, draft: 3.3 m, displacement: 490 tons. The hull and superstructure are made in the form of fiberglass and polyurethane sandwiches. The use of synthetic materials completely eliminates corrosion, their resistance is such that even after 20 years of operation, ships do not require hull repairs. 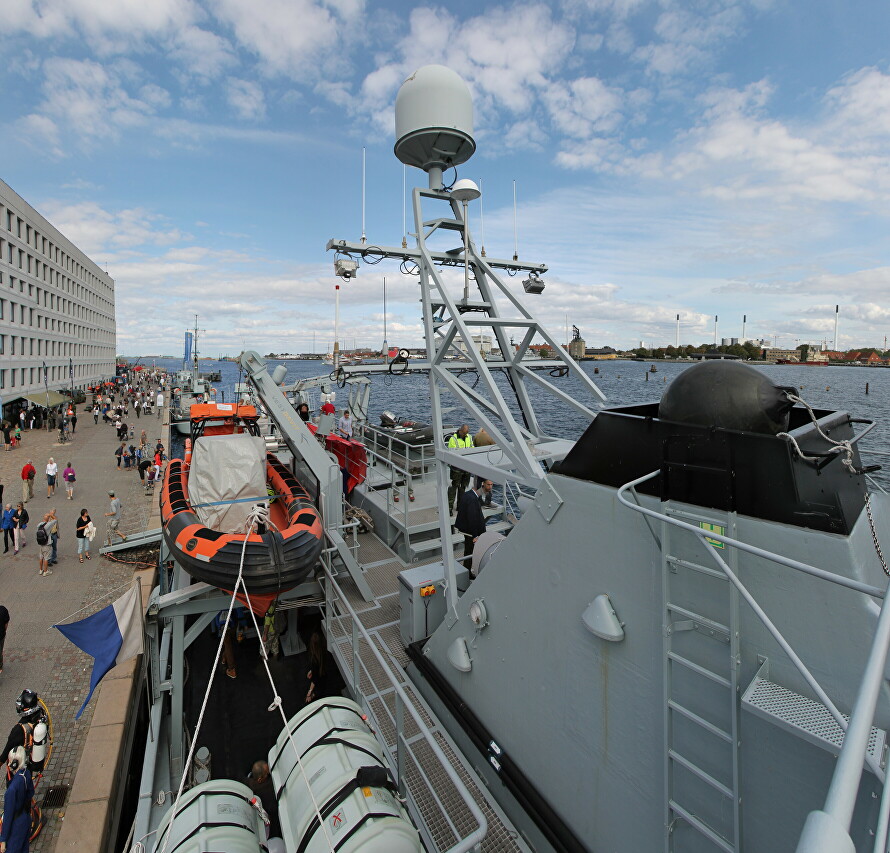 In 2010-12, Søløven was converted into a Navy diving training vessel (Søværnets Dykkertjeneste) in Faborg. The artillery installation, a gas turbine with a central screw were dismantled from the ship, and equipment was installed to ensure diving operations. 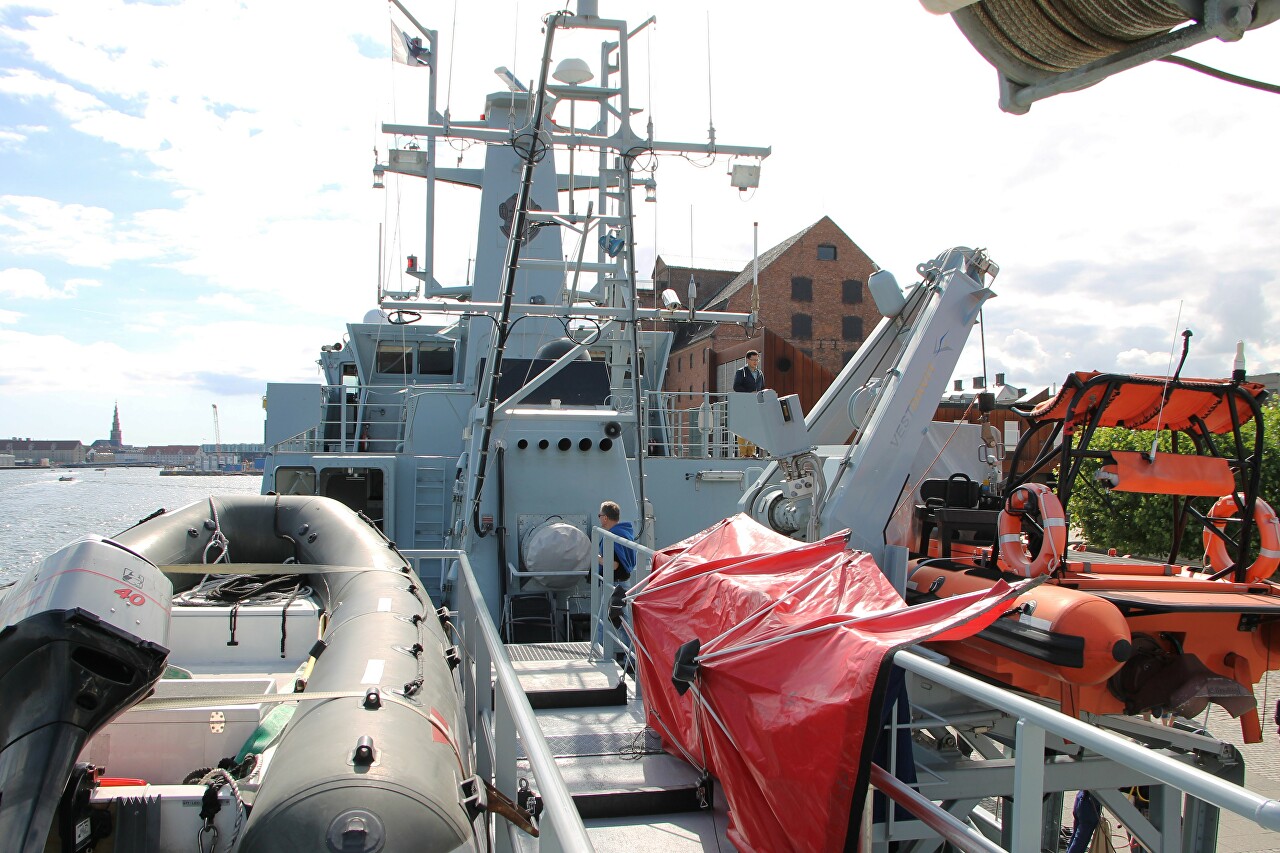 A winch is mounted in the stern to lower the diving bell. 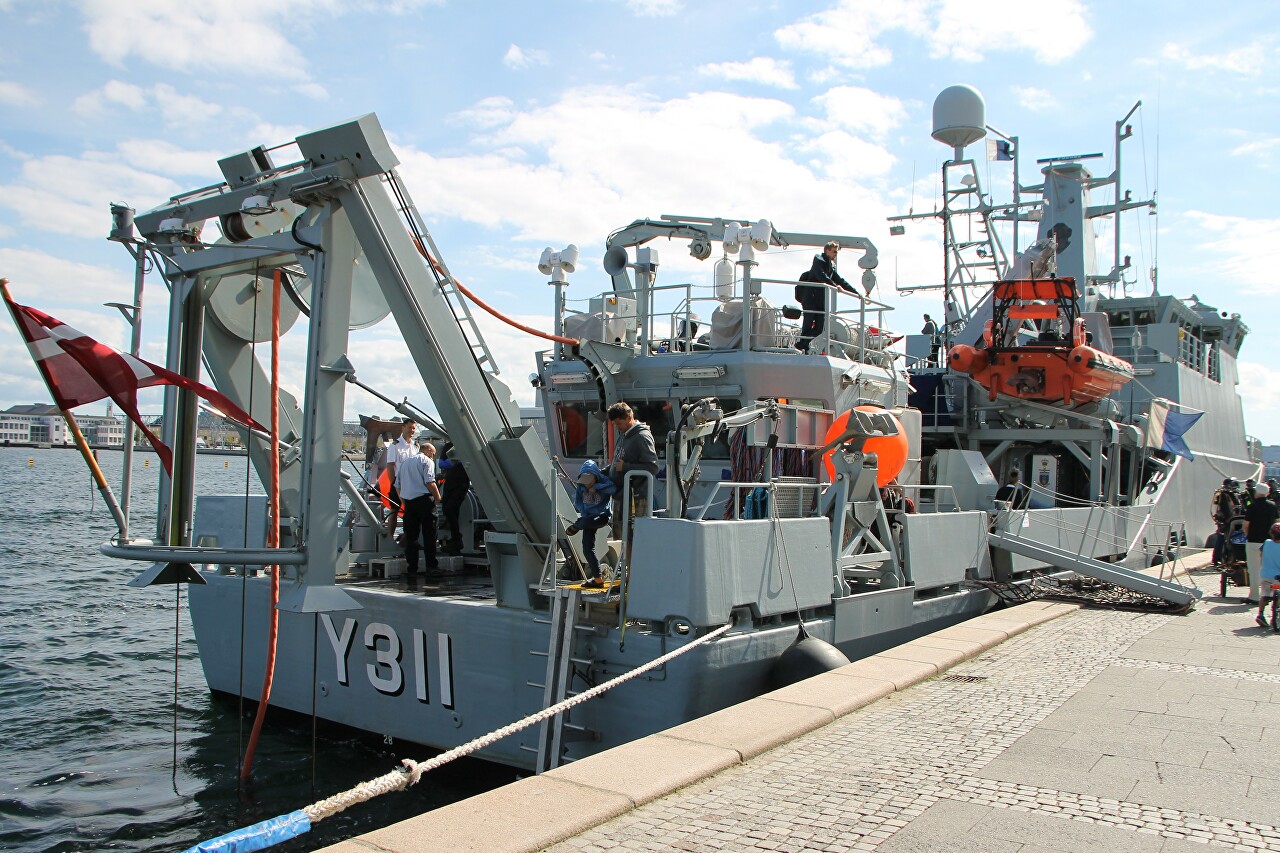 Let's go on board the ship. Here, the sailors tell visitors about their work. Of course, boys are particularly interested. 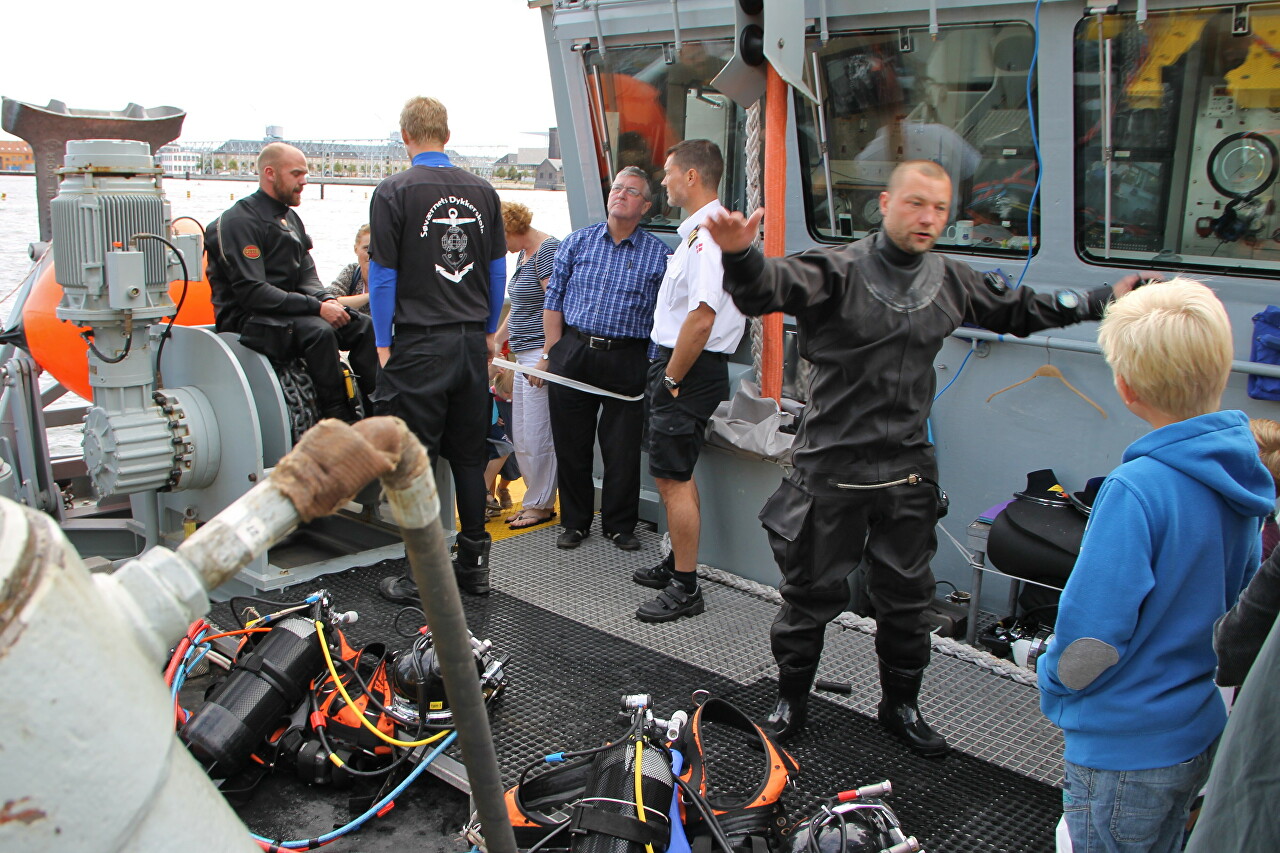 The main task of the ship is the practical training of military and civilian divers, as well as participation in operations to search for and neutralize explosive objects left off the coast of Denmark from the Second World War. In 2015, Navy divers set a diving record for Denmark, 85.5 meters. 90% of Danish waters do not exceed this depth. 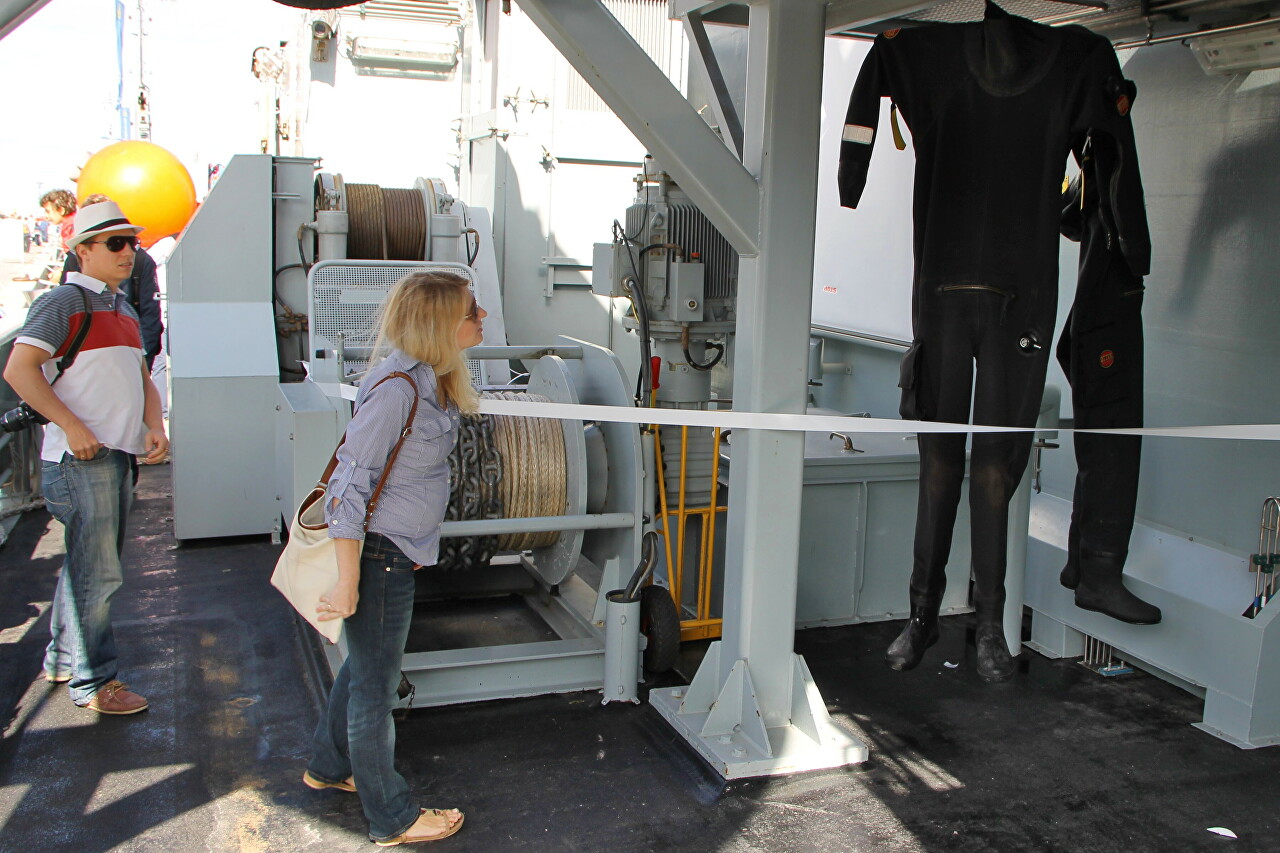 At the rear of the superstructure is a dive control room equipped with a variety of instruments. 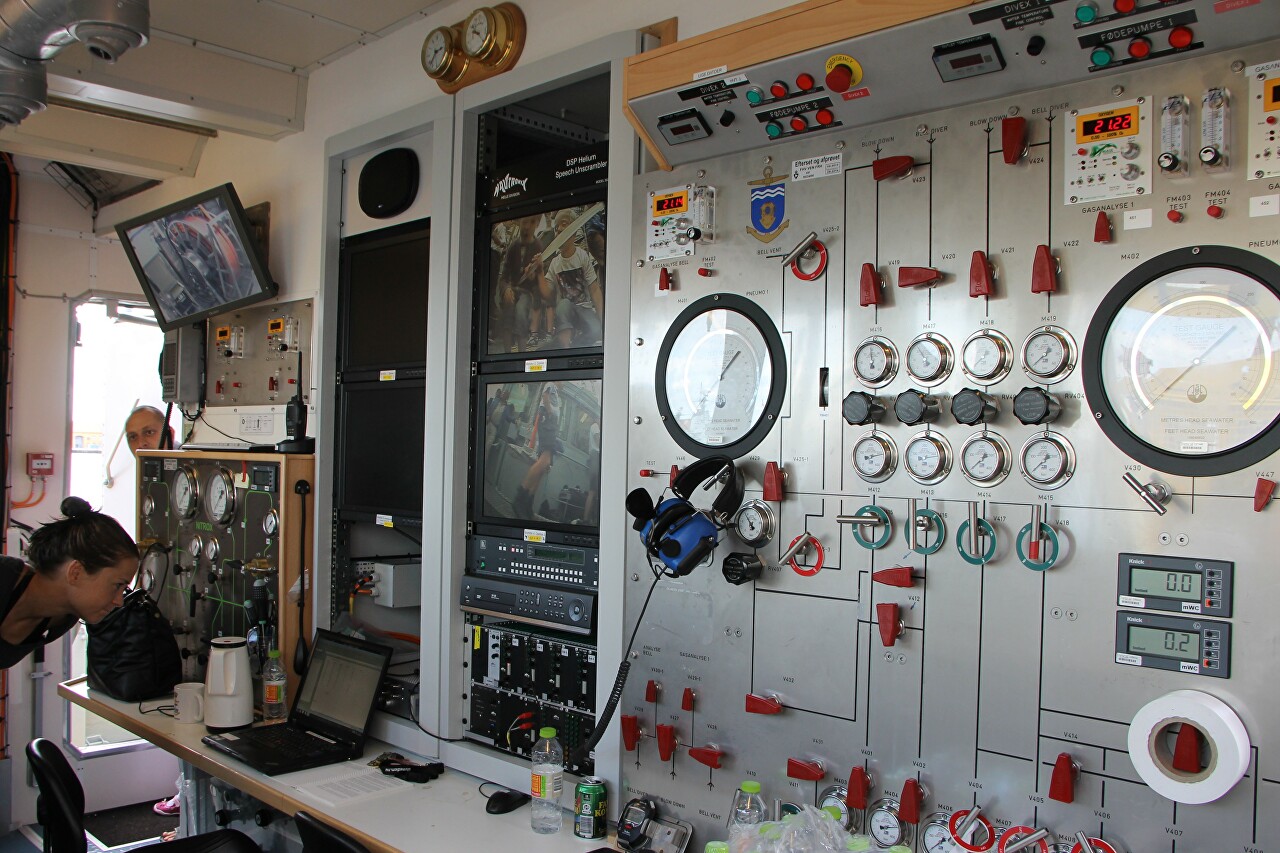 Here are the controls and controls for the air supply to the diving bell and the diving suits of submariners. The most important and large device, of course, is the depth indicator of the dive. 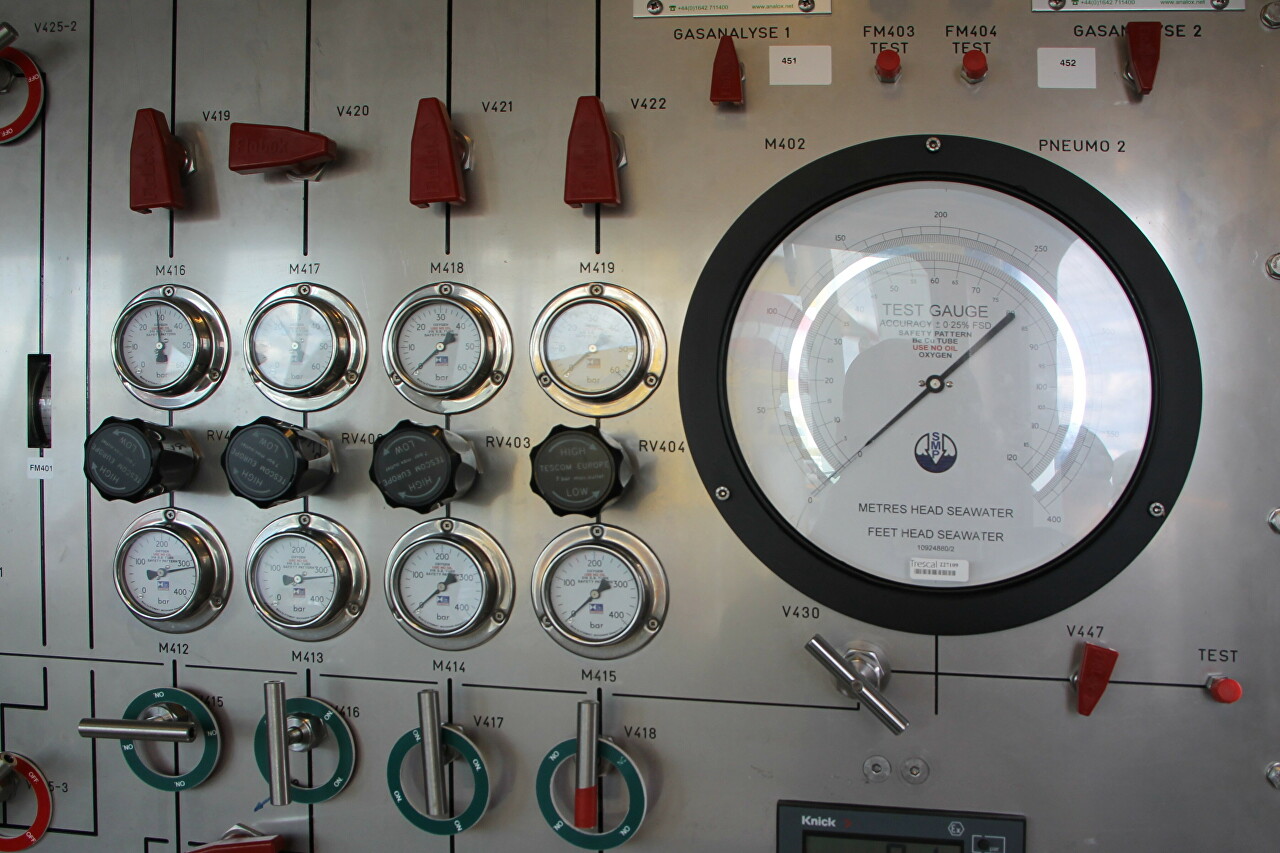 Sonar and radar readings are displayed on the monitors, displaying both the surface and underwater situation around the ship. 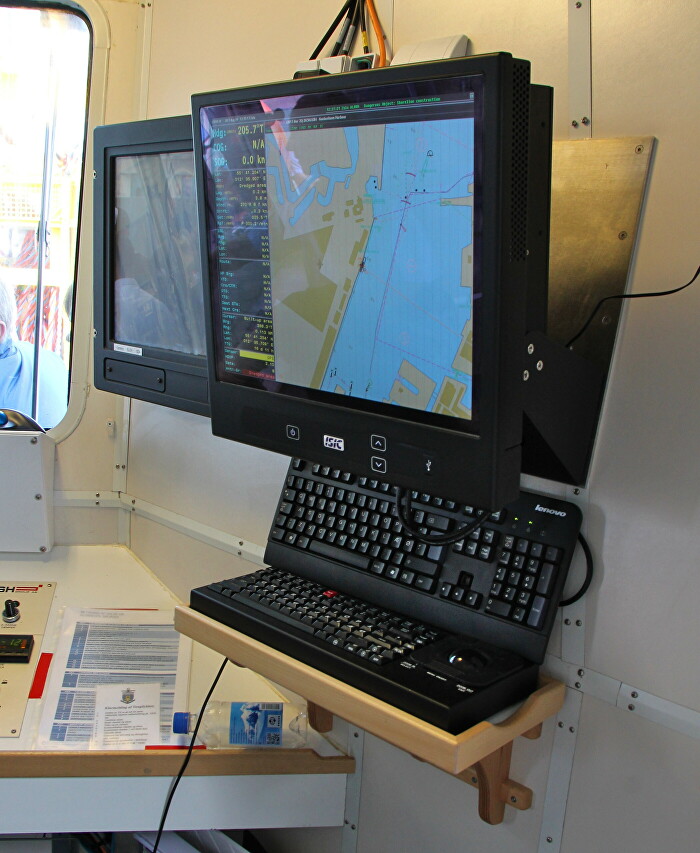 A significant part of the control room is occupied by a decompression chamber, the most important unit for deep-sea diving. It is designed for the gradual adaptation of divers to high pressure at depth and return to normal atmospheric pressure. Such chambers are necessary in order to avoid decompression sickness, which not only causes dizziness, nausea, joint pain, but can also lead to irreversible consequences in the body. 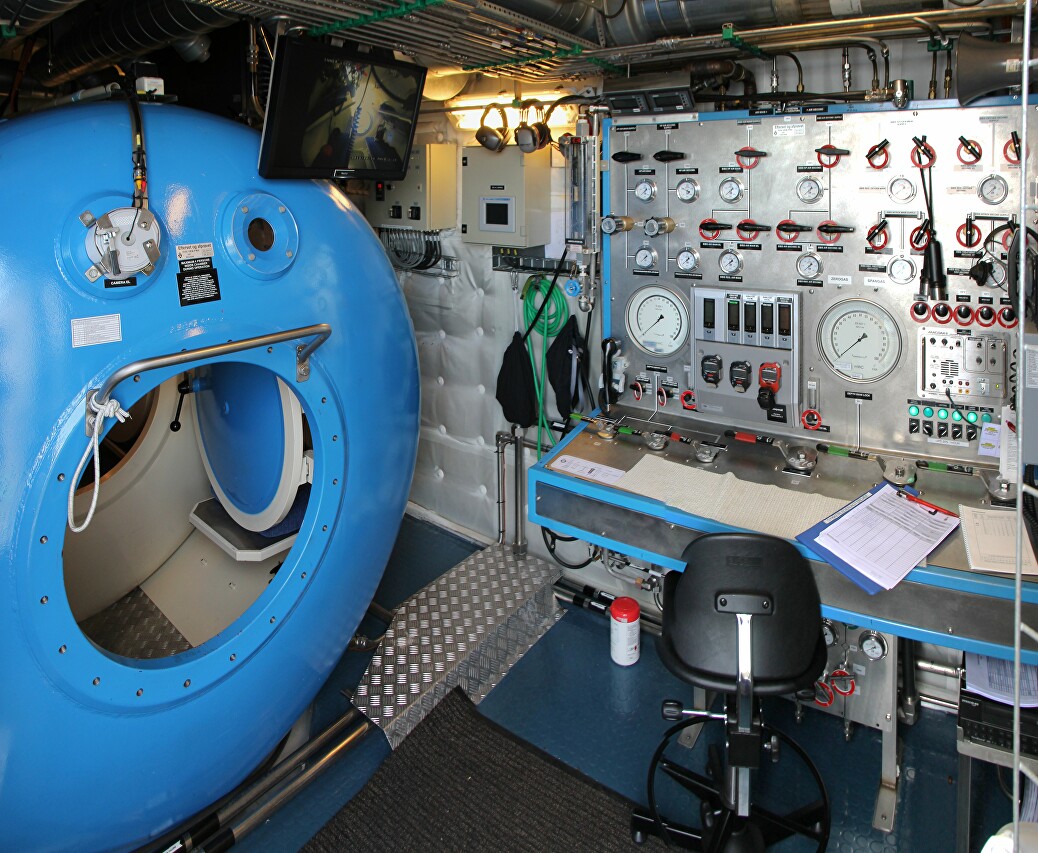 Adjacent to the control room is a compartment for charging scuba gear. There is an air conditioning unit and a nitrogen station. 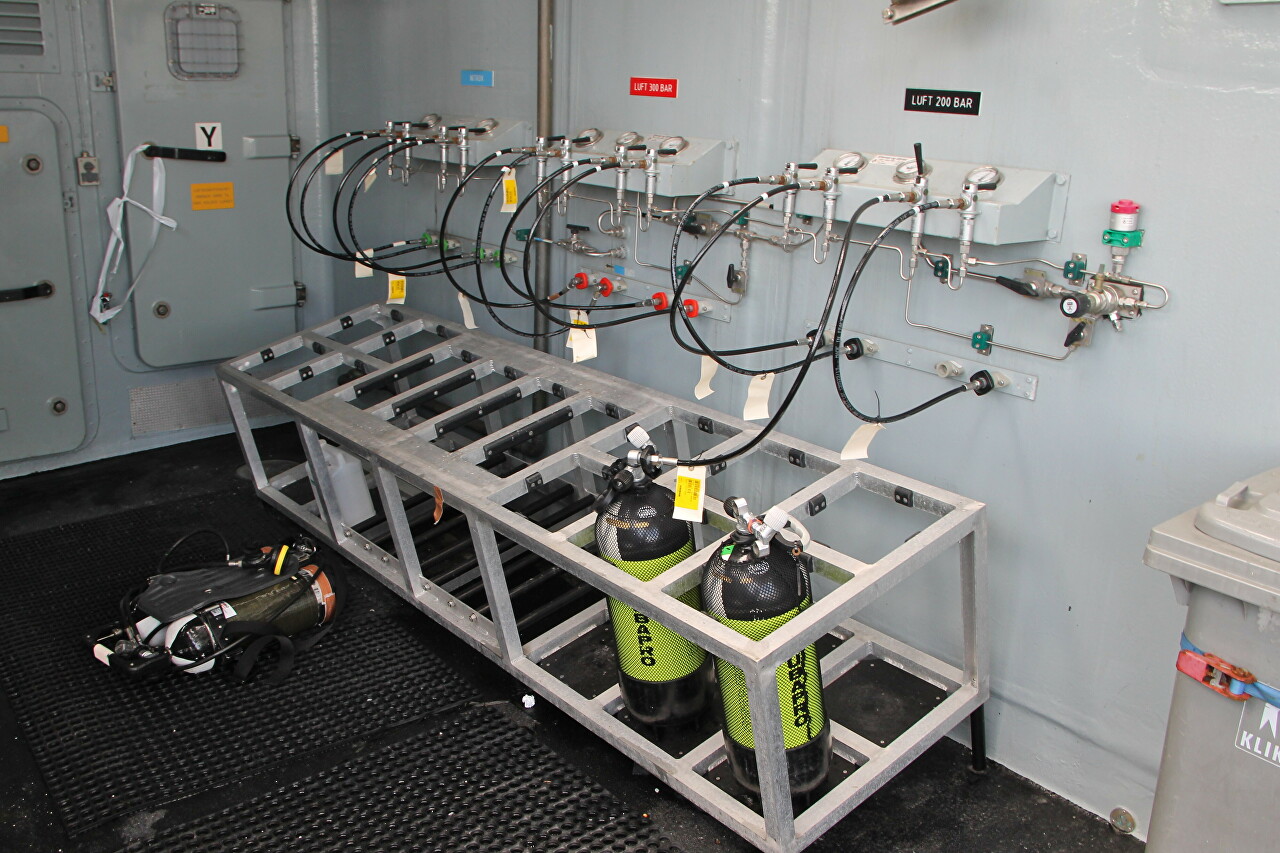 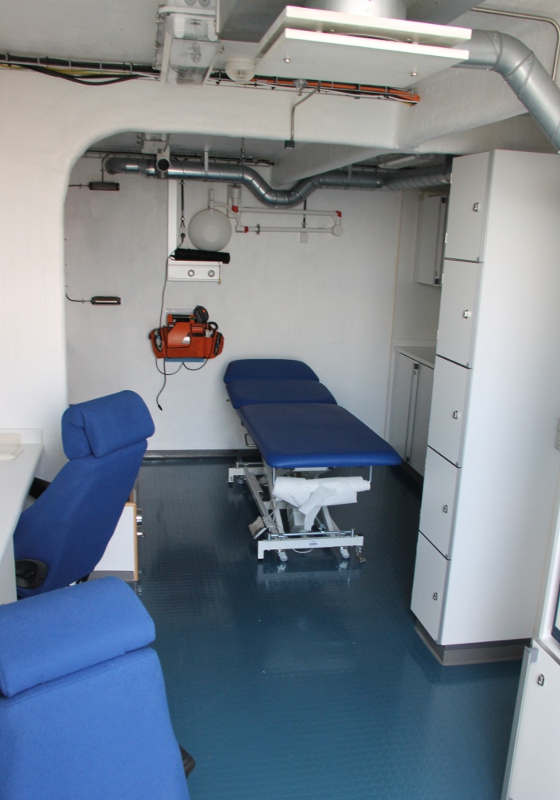 You can walk freely through most of the interior spaces of the ship. The permanent crew of the ship is 9 people, up to 20 cadets and instructors can be on board. 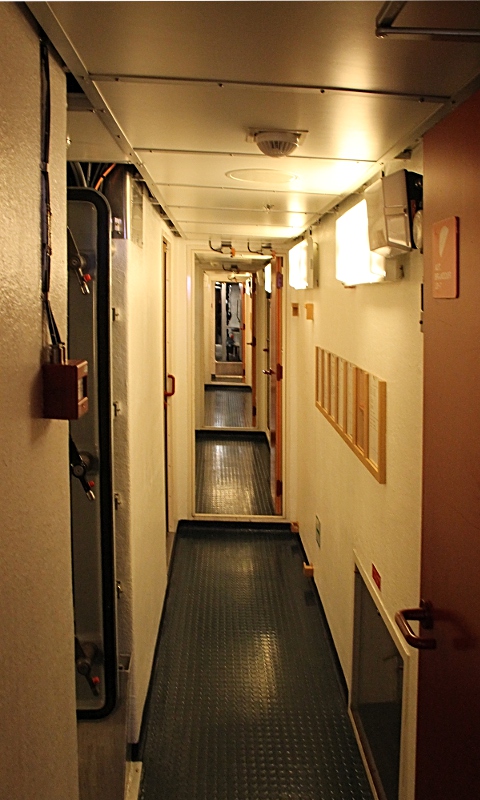 A ship's office is not much different from a land office. 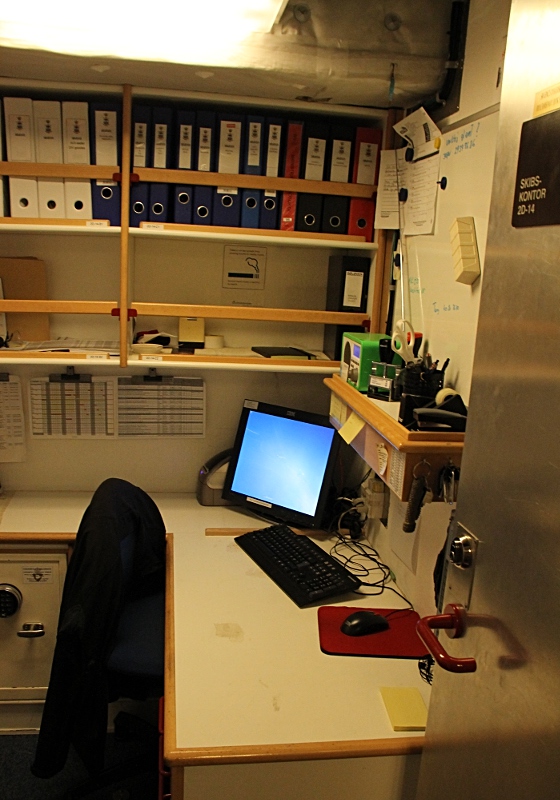 Emergency lights are present at every step and have both centralized and autonomous power supply. 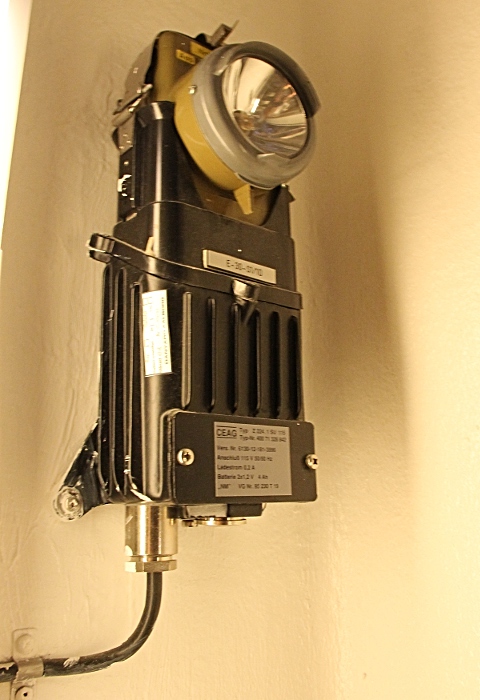 I climb the steep ladder to the command room of the ship. 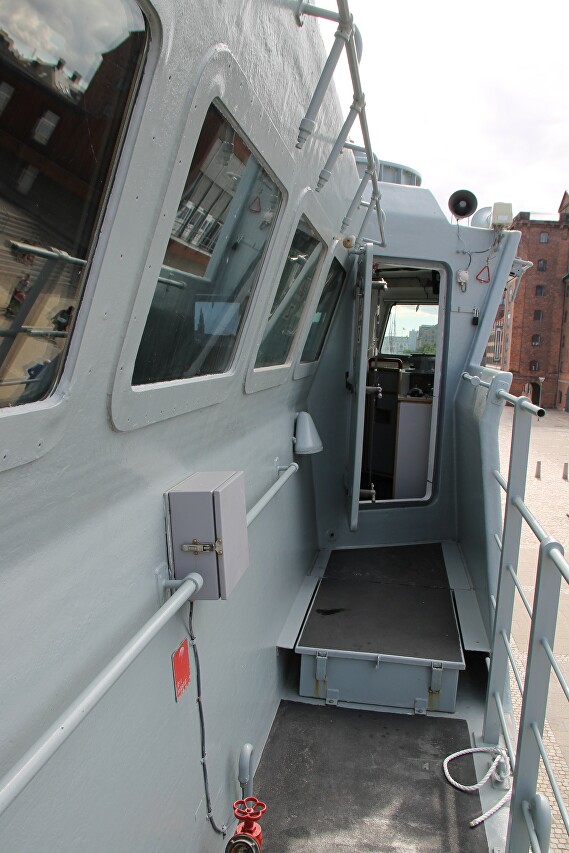 The control room impresses with a lot of computer monitors. Information technologies have radically changed the appearance of the control posts of modern ships - there are practically no classic devices here, they have been replaced by monitor screens. 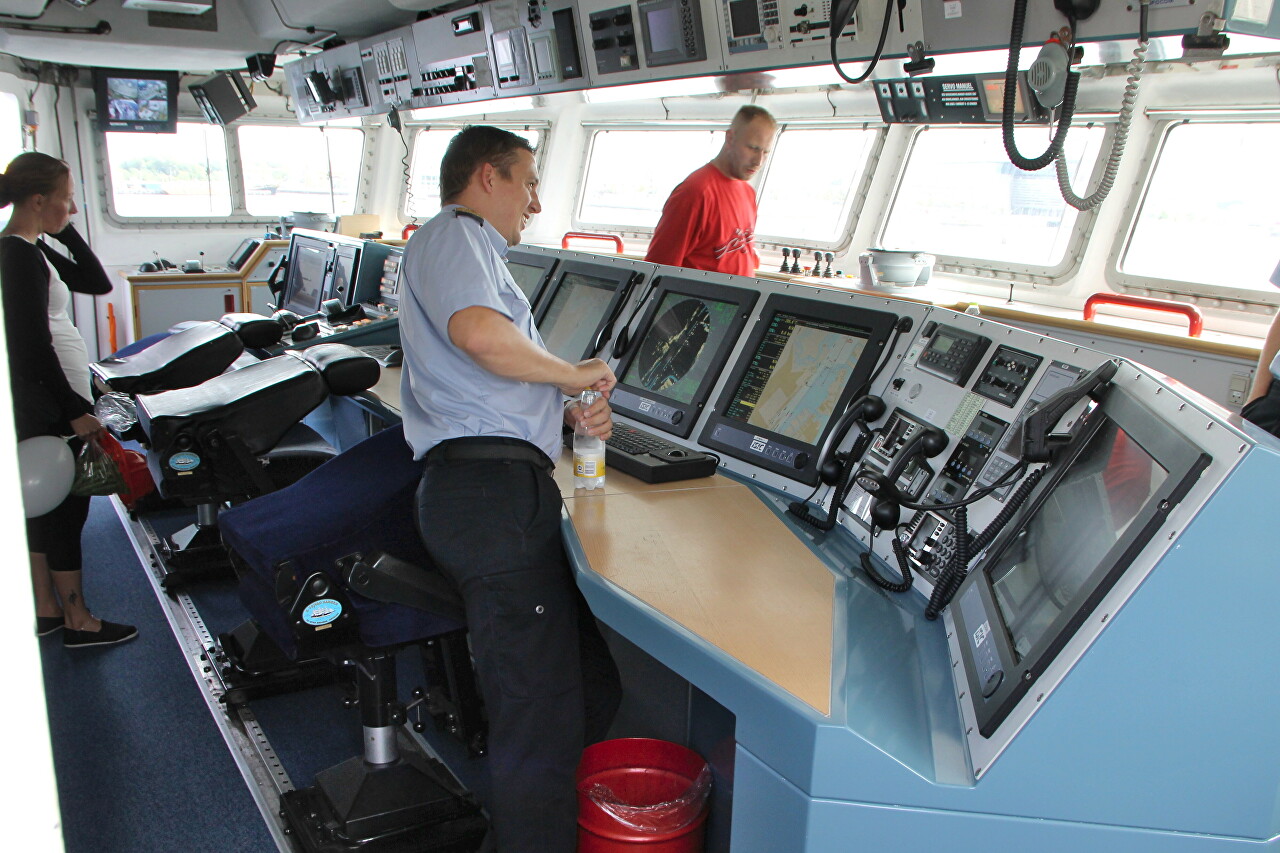 But, despite the achievements of electronics, without the good old magnetic compass in the gimbal can not do more than one ship. Although here the compass is equipped with a digital indicator. 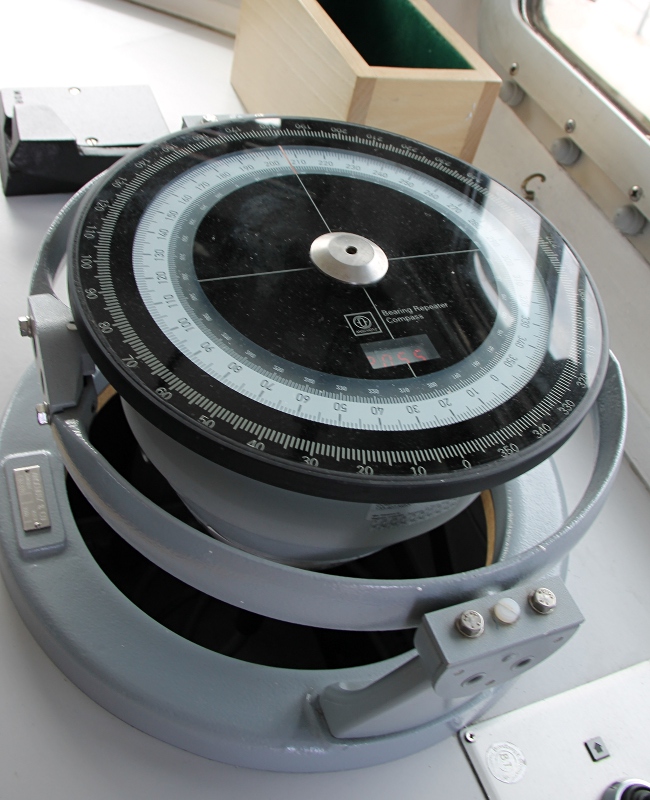 Central control post. Here we see the control levers of the main engines, the bow thruster, the rudder, the gyrocompass repeater. 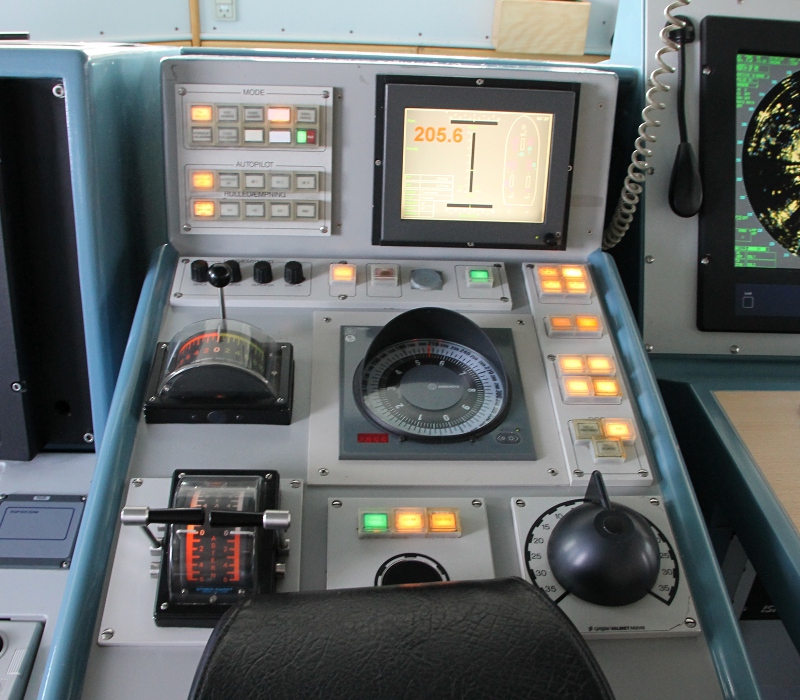 In addition to the center console, there are backup consoles on each side of the wheelhouse, which greatly facilitate maneuvering when mooring. 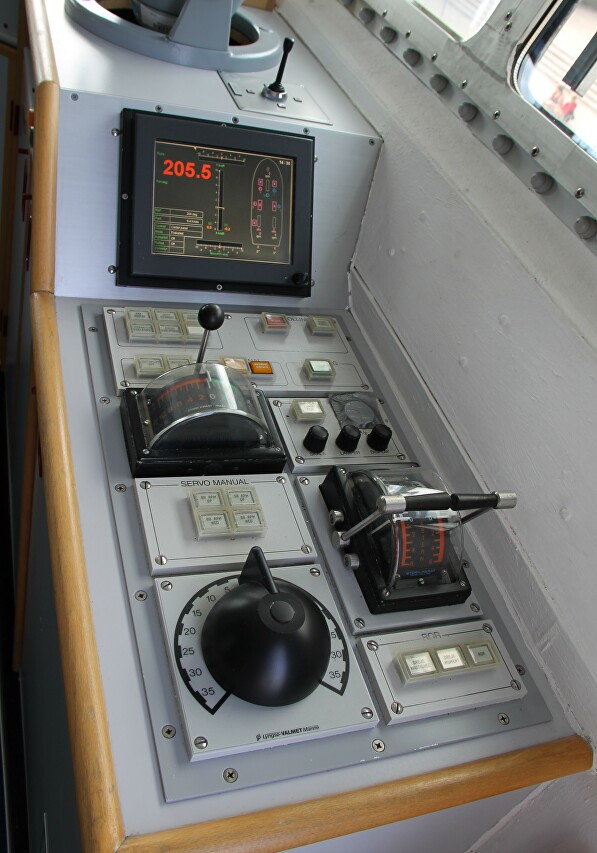 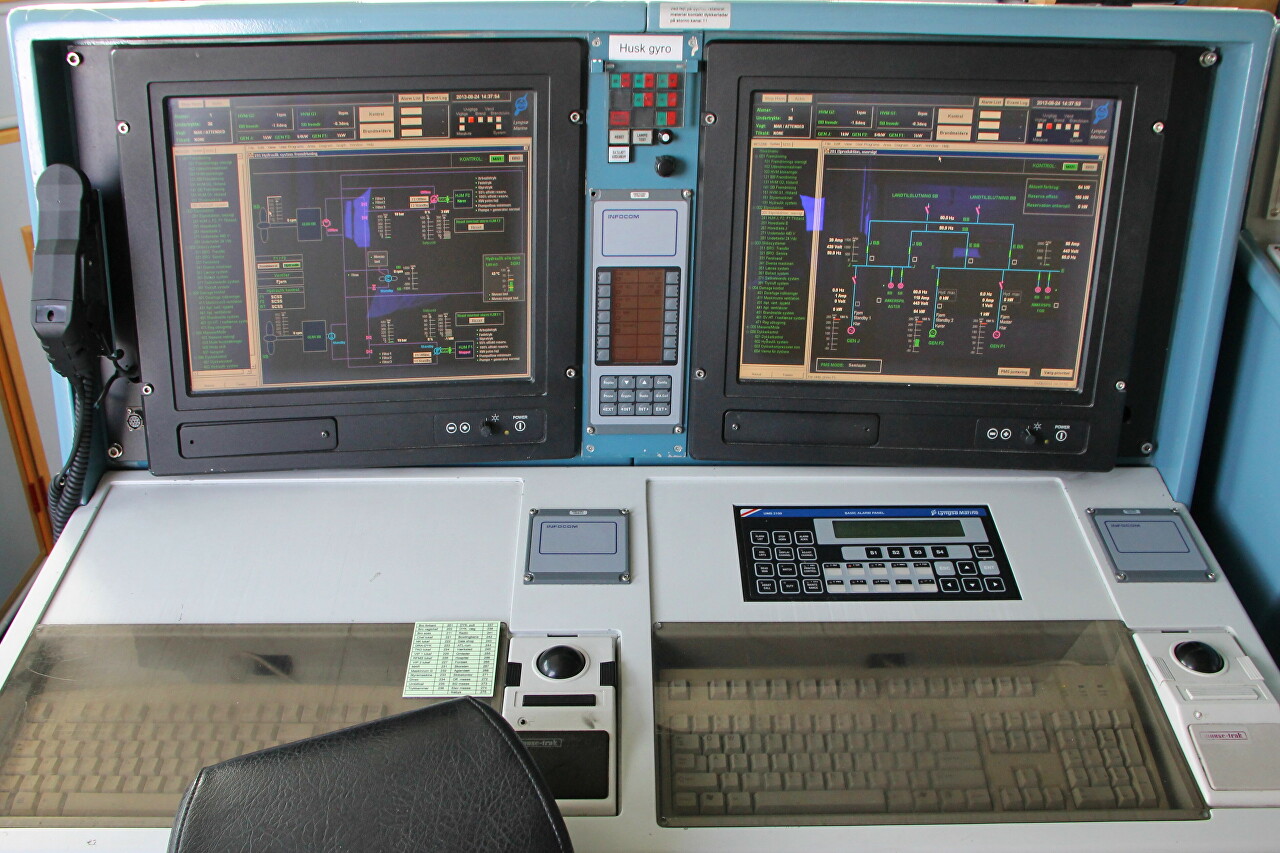 Sonar indicator. The first such systems appeared in the Second World War and were used to detect submarines. The principle of operation is simple, the emitter under the bottom of the ship generates a sound pulse in a given direction, and the receiver catches the signal reflected from underwater objects. On the screen of modern sonar, you can see a three-dimensional representation of the underwater environment. 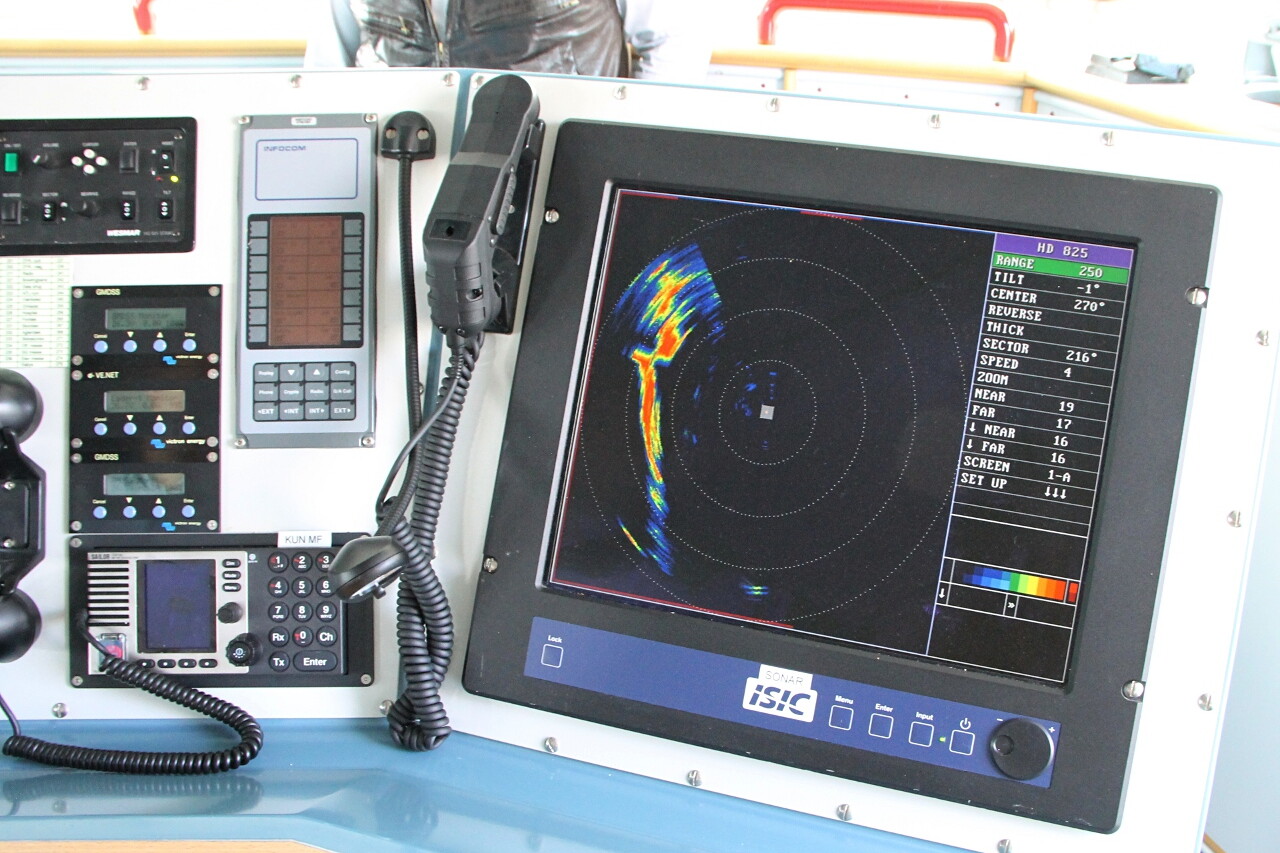 The wheelhouse is a training room, so there are several workplaces equipped with duplicate equipment. 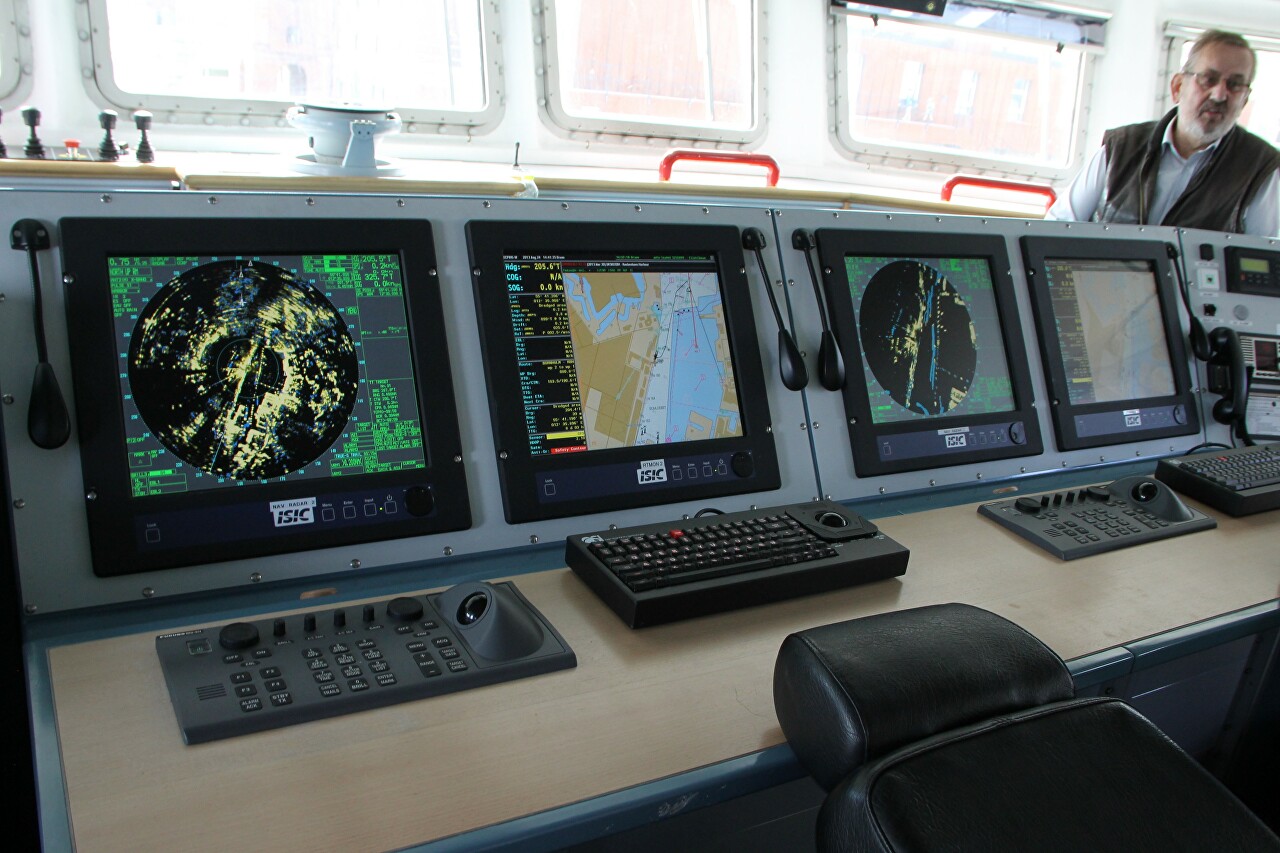 This small excursion left an unforgettable impression, here for the first time a child's dream came true - to stand on the bridge of an active, and not a museum warship. 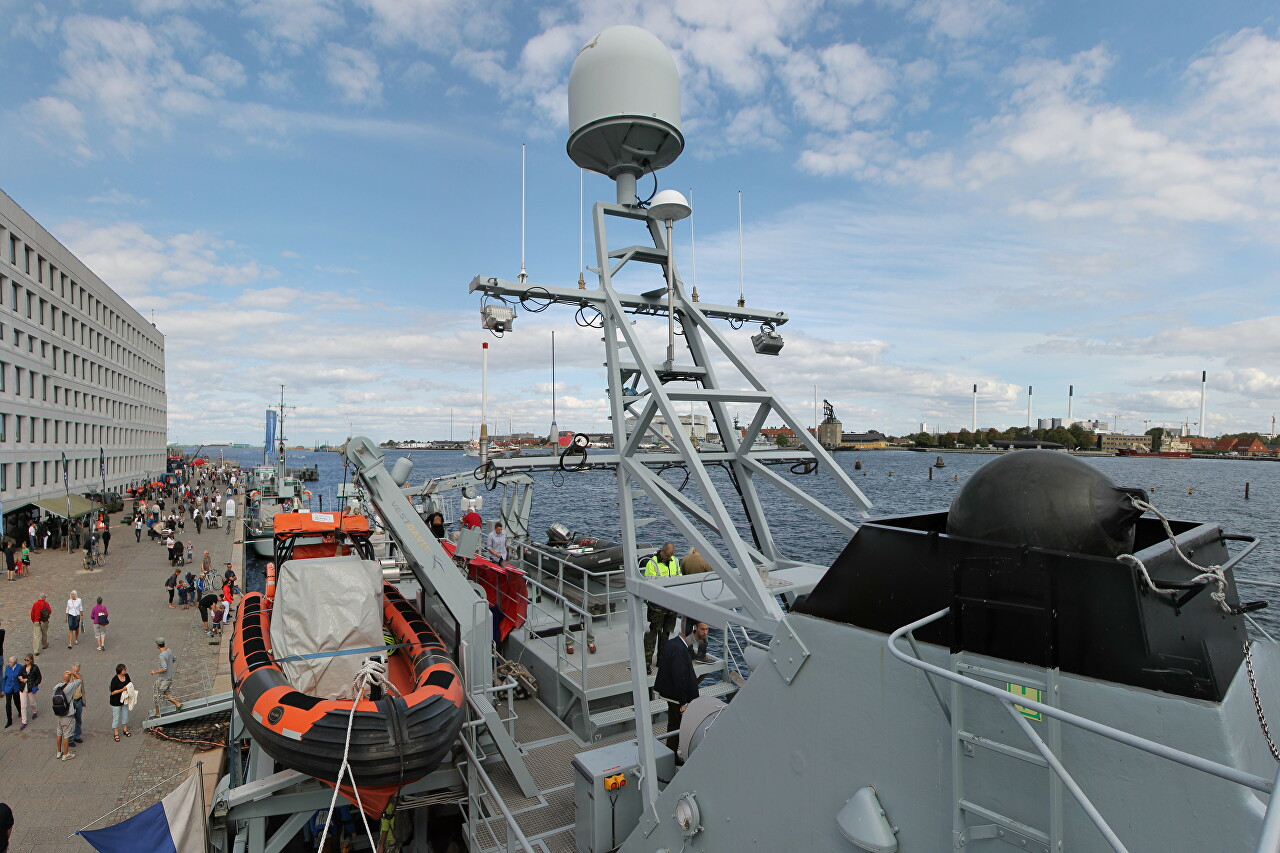