According to the project, seven 120-mm Bofors wz. 34/36 guns were installed on the Grom-class destroyers, which include the Błyskawica. After the defeat of Poland, the ship went to England, operated as part of the British fleet, guarding convoys in the North Atlantic. The main enemy of the convoys was the German air force, so in 1941, heavy 120-mm guns were replaced with universal 102-mm guns that could conduct anti-aircraft fire and had a high rate of fire. The guns were placed in pairs in four turret of the HA/LA Mark XIX type, arranged according to the traditional destroyer pattern. 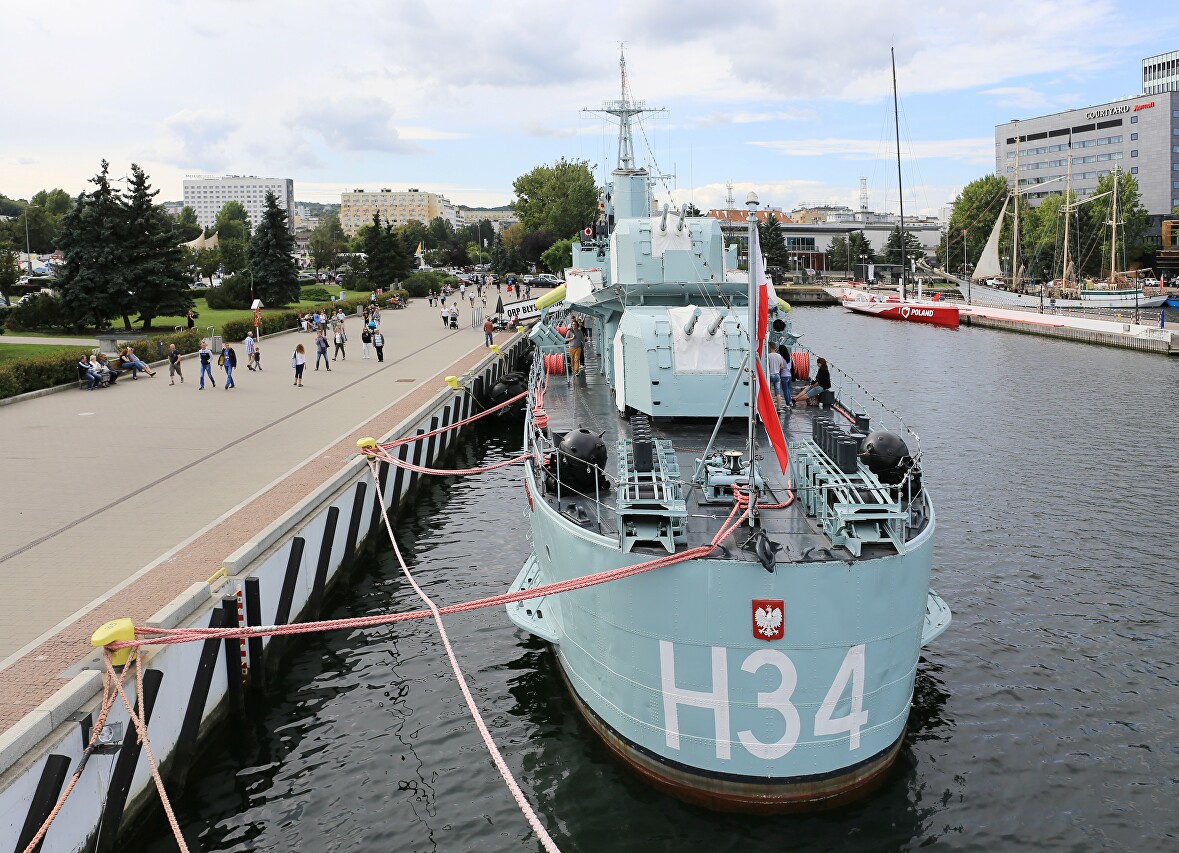 The four-inch QF Mk XVI gun was adopted in 1936 and used until the end of the 50s, becoming standard as the universal artillery of the British, Canadian and Australian navies. In total, more than two and a half thousand guns were produced, they were installed on ships of various classes, from corvettes to battleships. 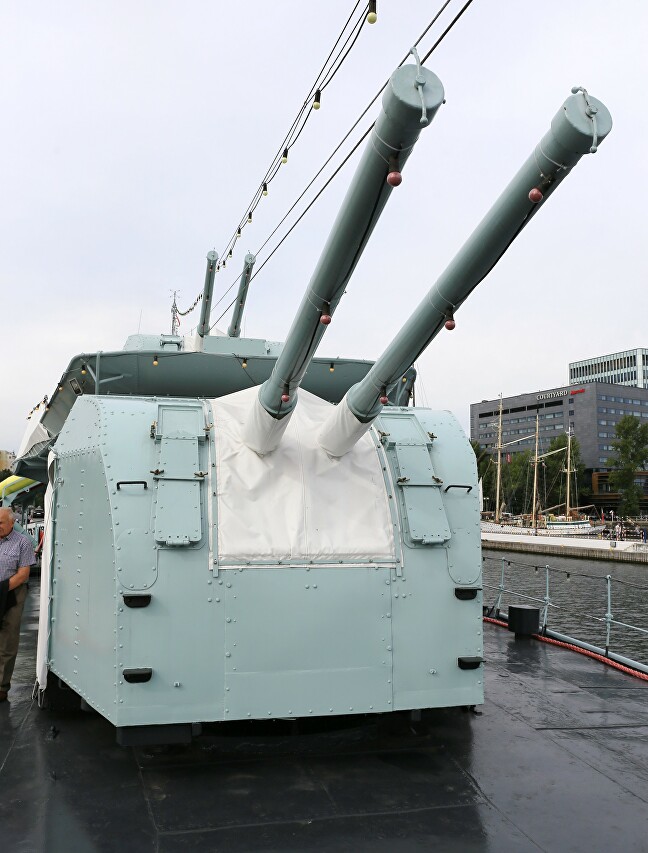 The length of the barrel is 4572 mm (45 calibers), while the weight of the barrel with the breech is relatively small, only 2039 kg. The two-arm HA/LA Mark XIX turret provided vertical guidance with angles from -10 to + 80 degrees. The range of fire at the maximum elevation angle of 11890 meters. 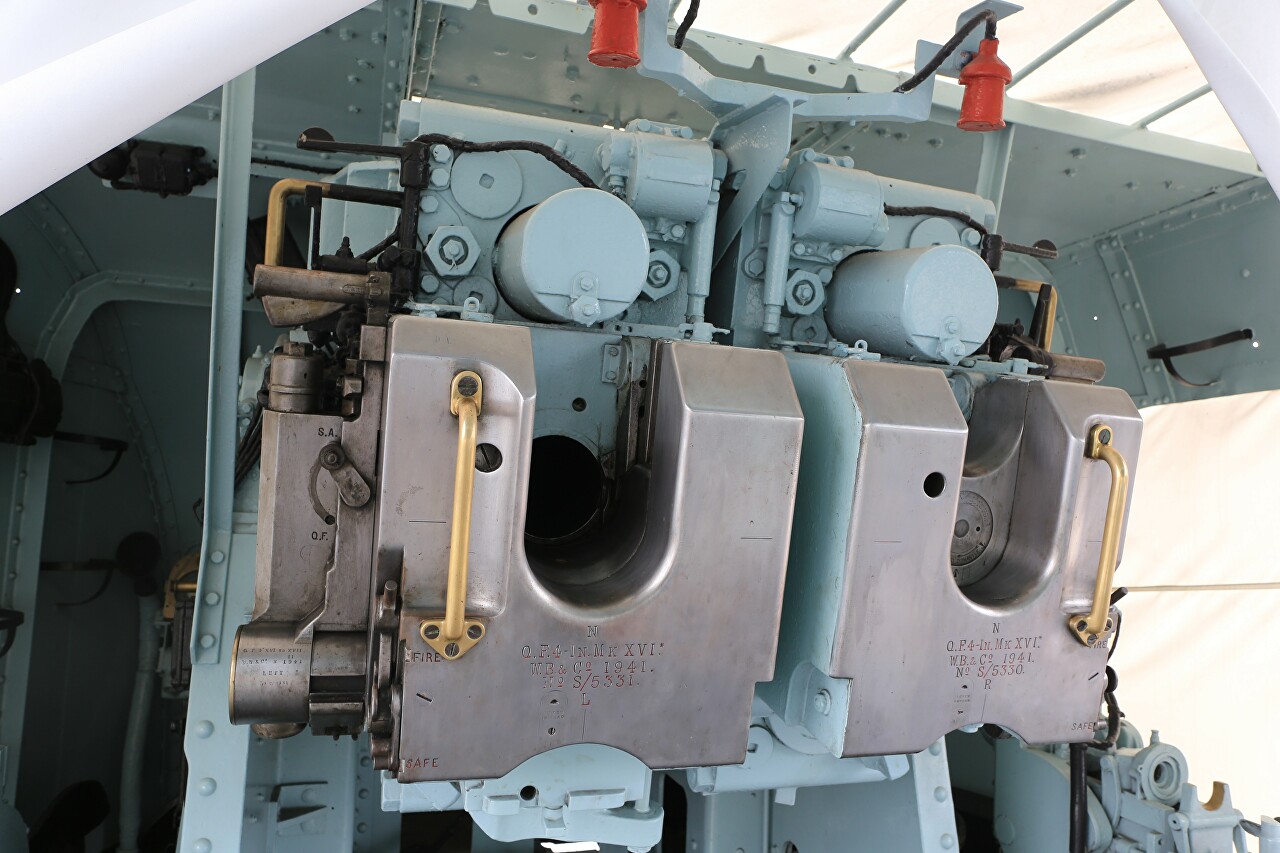 The gun has a vertical sliding shutter and a hydropneumatic recoil device. 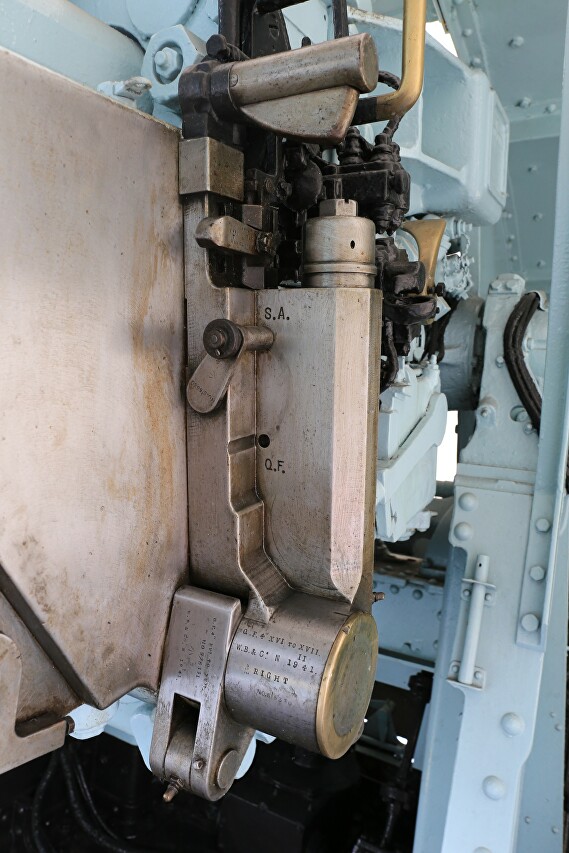 The guns were aimed from the сentral fire control post, but there was a possibility of Autonomous firing. The calculation of the turret consisted of 8 people, 4 for each gun. 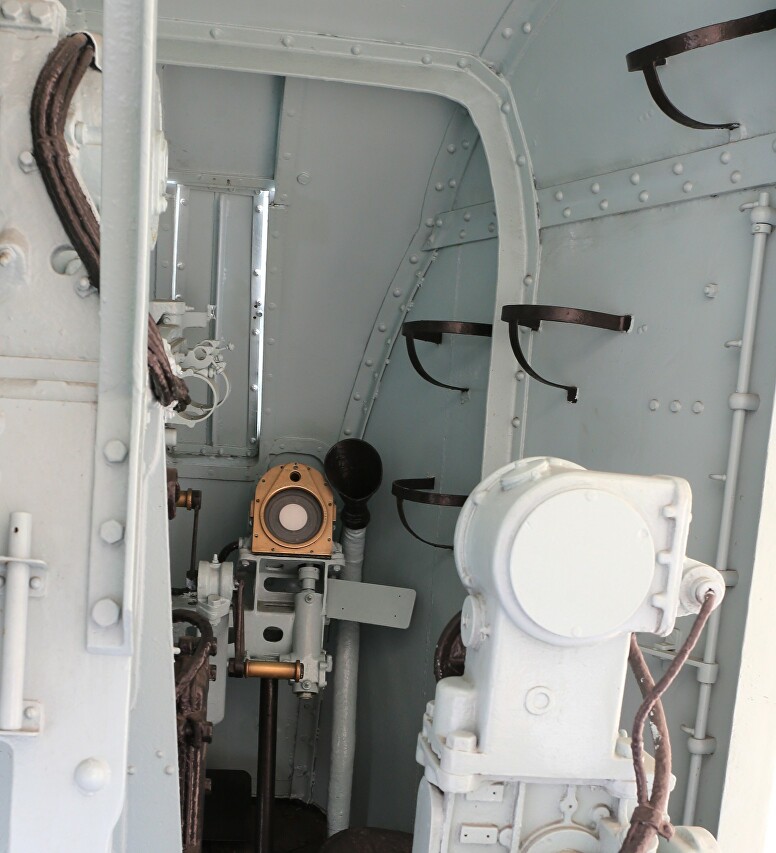 In the turret to the right and left of the guns there are two devices for automatically setting the fuse to the desired deceleration (distance). 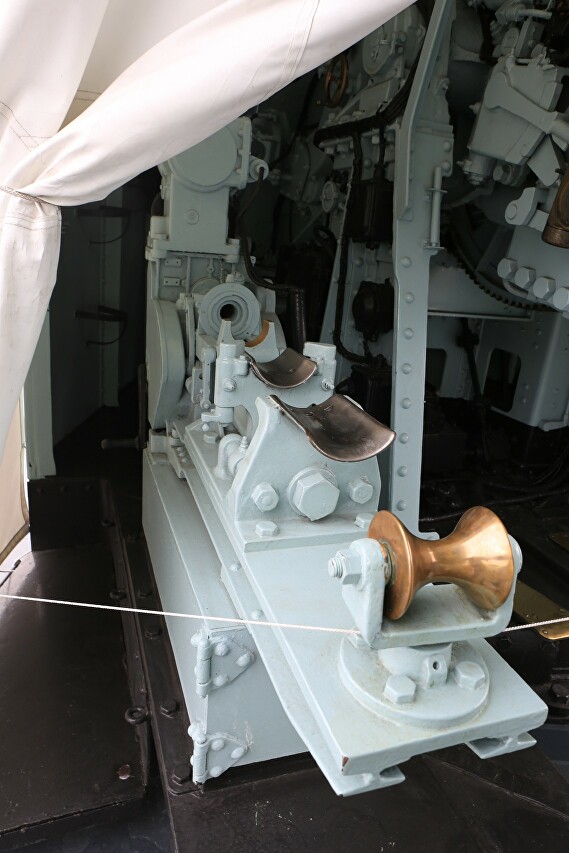 The deceleration mechanism received data from the fire control station. Thanks to the moderator, the projectile exploded at the desired height and range, hitting enemy aircraft with fragments. 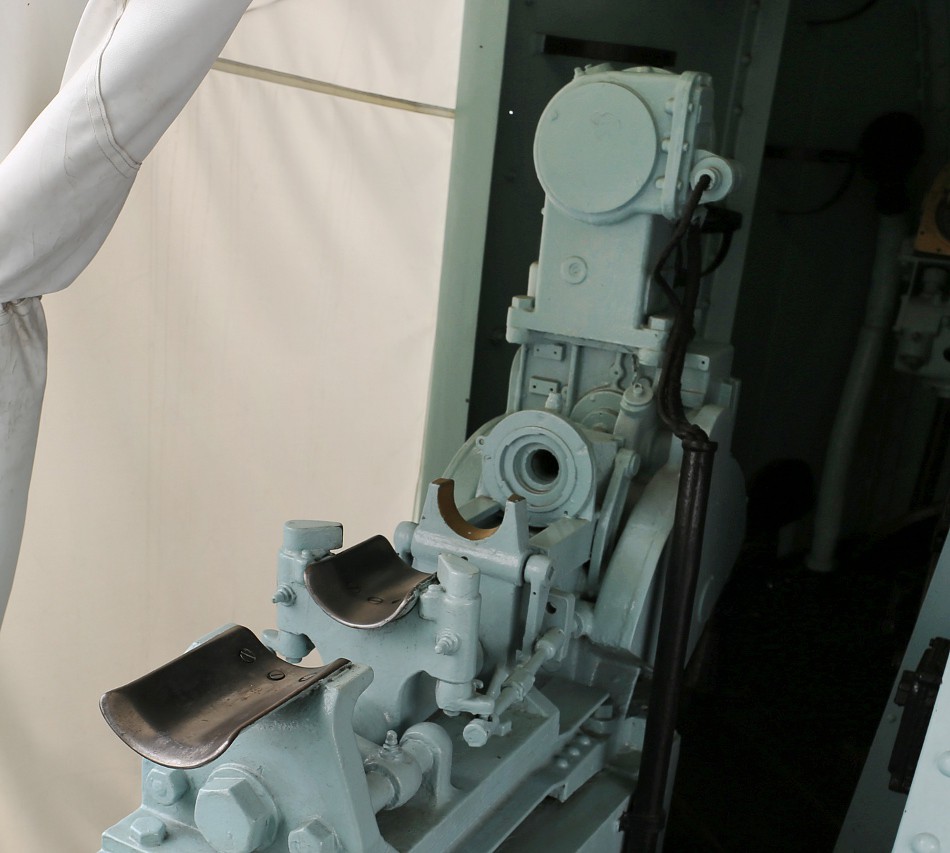 The unitary cartridge had a length of 1.07 meters and weighed 31.2 kg, the mass of the high-explosive shell 16 kg. Cartridges were lifted from the cellars by elevators at a speed of up to 18 per minute, there were two elevators for each turret. Thus all the destroyer's guns could fire 144 projectiles with a total weight of 2,300 kilograms in a minute. 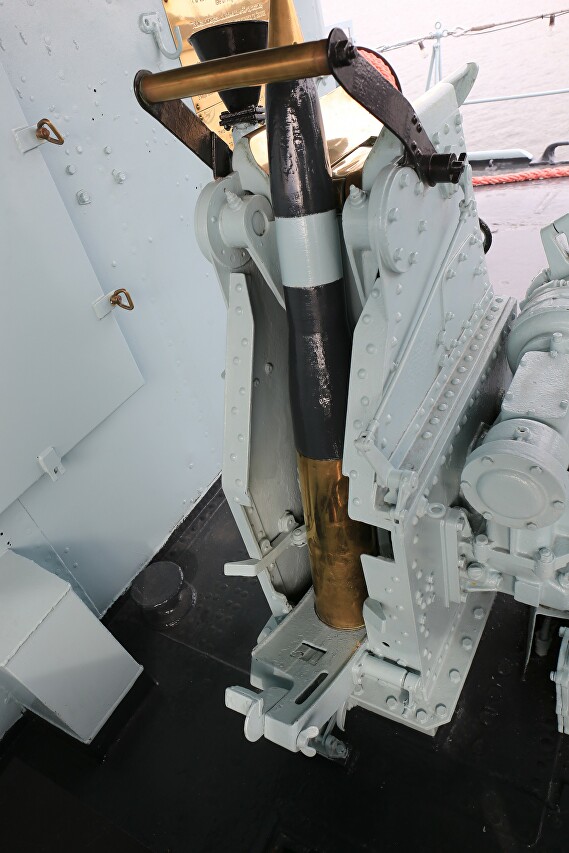 On the bulkhead next to the elevator of the lower aft tower is a memorial plaque dedicated to the 50th anniversary of the repulse of the raid on the port of Cowes on the night of may 1942. Błyskawica's gunners played a crucial role in repelling the attack of 160 German bombers, and the ship's smoke screen deprived the Luftwaffe pilots of the possibility of targeted bombing. In memory of this, celebrations are regularly held in Cowes, in which ships of the Polish Navy participate, and in 2004 one of the squares of Cowes was named in honor of the commander of Blyskawica, Wojciech Frantzki. 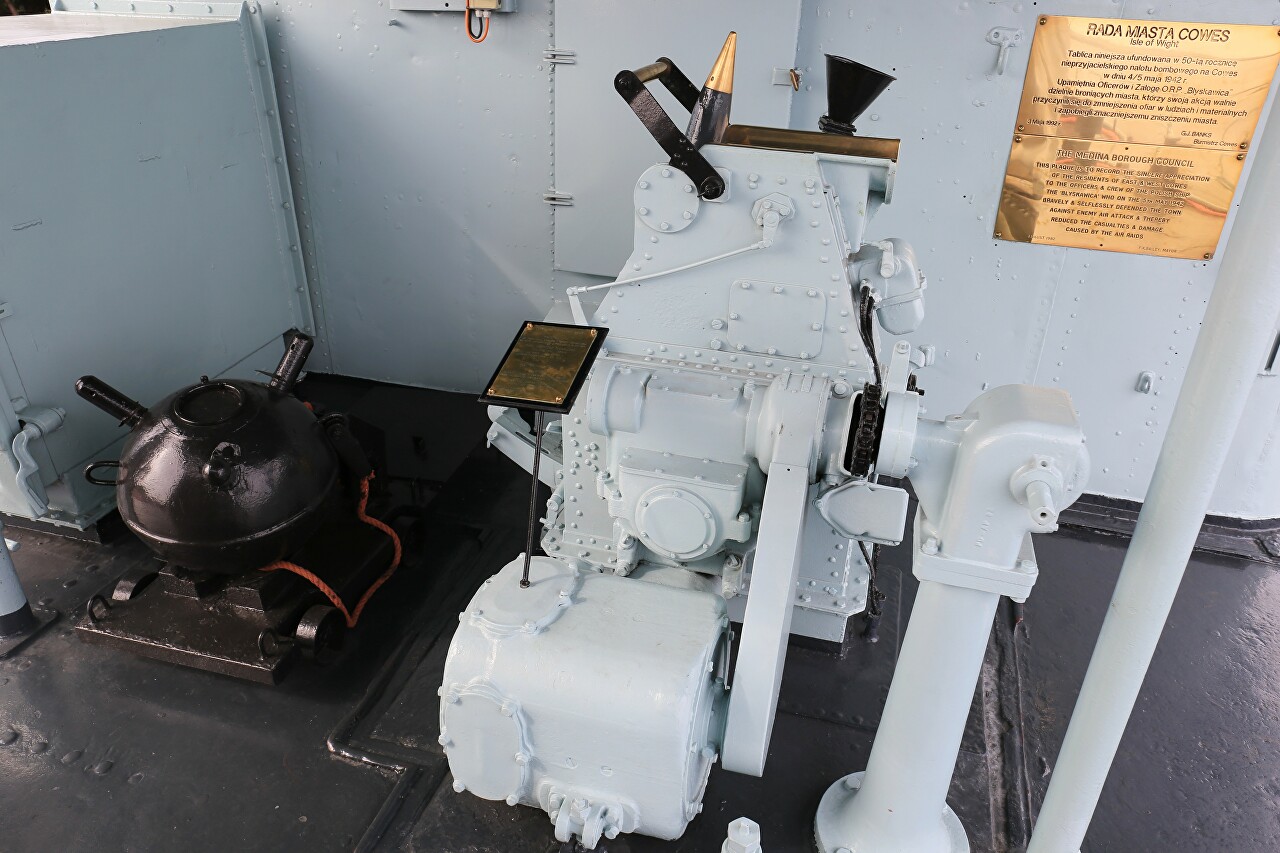