The most famous example of the Finnish Art Deco is the building of the Central railway station (Helsingin päärautatieasema). Its history began in 1856, when the Russian Emperor Alexander II visited the Principality of Finland, which was then part of the Russian Empire. One of the objectives of the visit was to approve the program of economic development of the region, for which it was important to build transport communications. The first railway connected port Helsingfors with the industrial city Hämeenlinna. Traffic was opened on January 31, 1862, giving impetus to the economic growth of the interior of Finland. Railway construction significantly changed the urban landscape, in particular, were drained marshy area of Kluuvi, which merged all of the city sewage. The first station was built in 1861, but opened only with the beginning of regular traffic, March 17, 1862. The first station of the Finnish capital was three-storey, built of wood, stone-faced and more like a country estate. The population of the city in those years of a little over 20 thousand and that was enough. 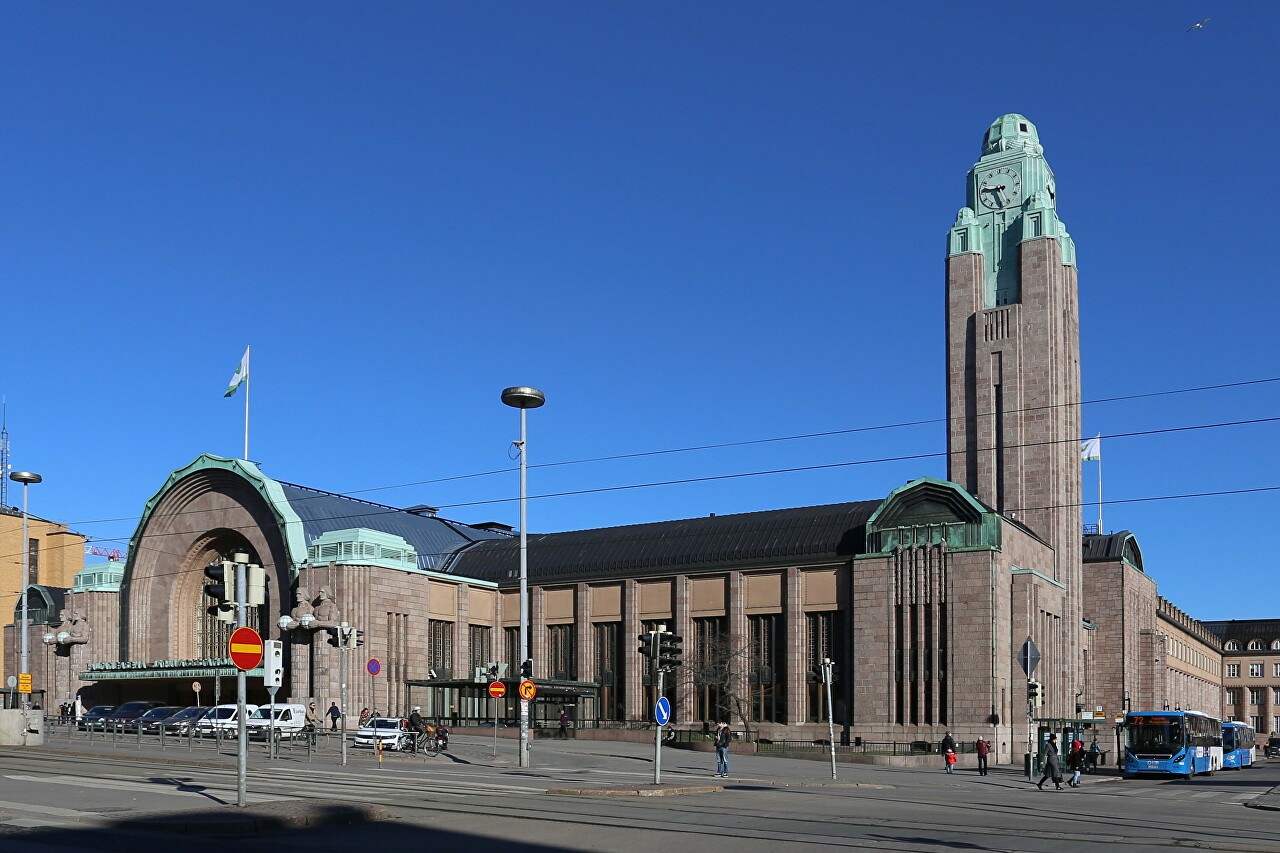 By the end of the century, the pace of urbanization was explosive and the population increased to 70,000 in a short period of time. in 1895, the Railway Council decided to build a new station. However, it was slow and the first competition of projects was announced only in 1903, and even then under the pressing of the Architectural club. Finally, in 1904, the project of architect Eliel Saarinen was adopted, and a year later construction began. It is interesting that the old station at this time functioned, it was demolished in parts, gradually transferring services to new rooms. The building stands on 10 thousand piles, hammered to a depth of 20-30 meters, the walls and arches are made of reinforced concrete, lined with natural granite. At the beginning of the First world war, the station was almost finished, but martial law was declared and the construction was stopped. A new, although not completed, station was opened only in 1919, after Finland gained independence and the ensuing civil war. Completion lasted until 1925. 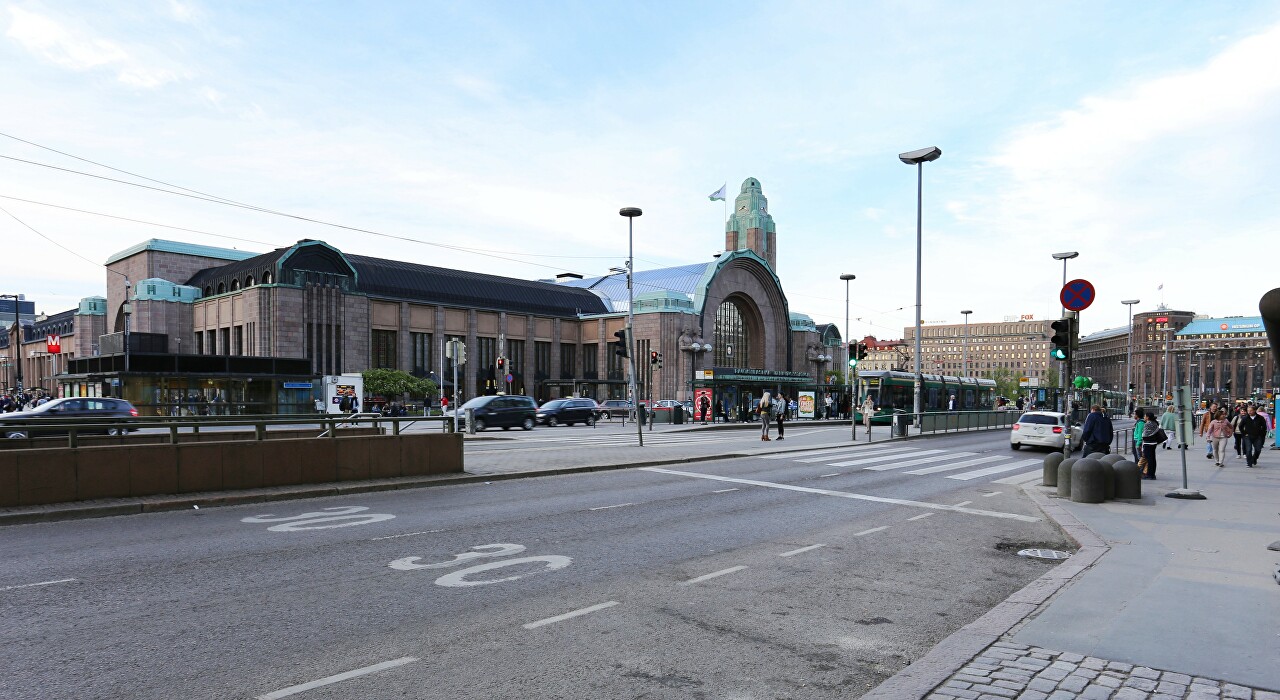 The clock tower has become one of the symbols of Helsinki. At the top is the observation deck, previously open to the public, but now it is available only for high guests. The tower rises 48.5 meters above the ground, the walls are made of brick, 3600 granite blocks are used for the outer cladding. 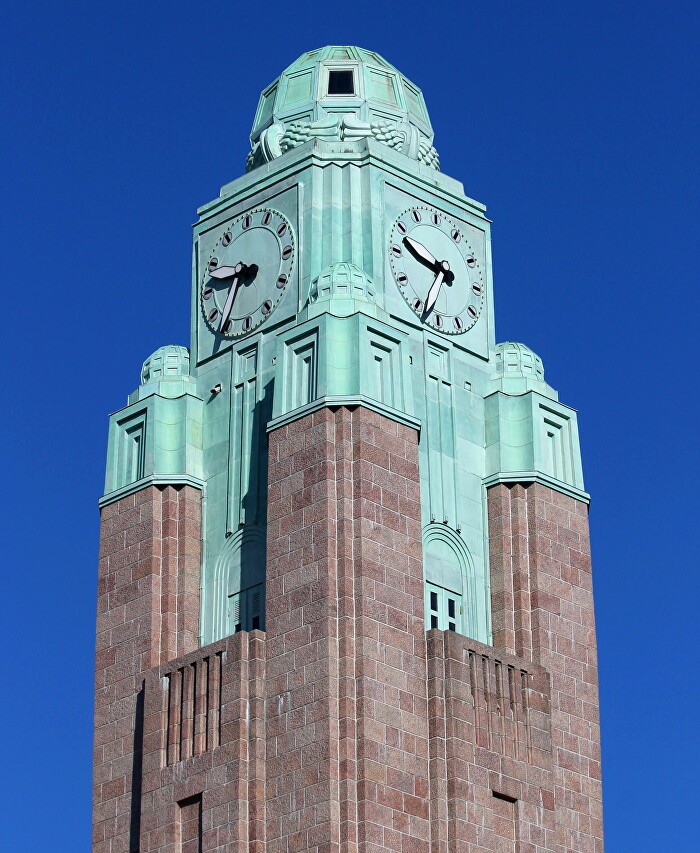 The upper part of the tower has a wooden frame covered with copper sheet. The total weight of the skin is about two tons. The watch was made in Germany in 1919, but it was installed only in 1922, and before that were in Petrograd. Diameter of dial 3.3 meters, arrow length 1.2 and 1.51 meters. 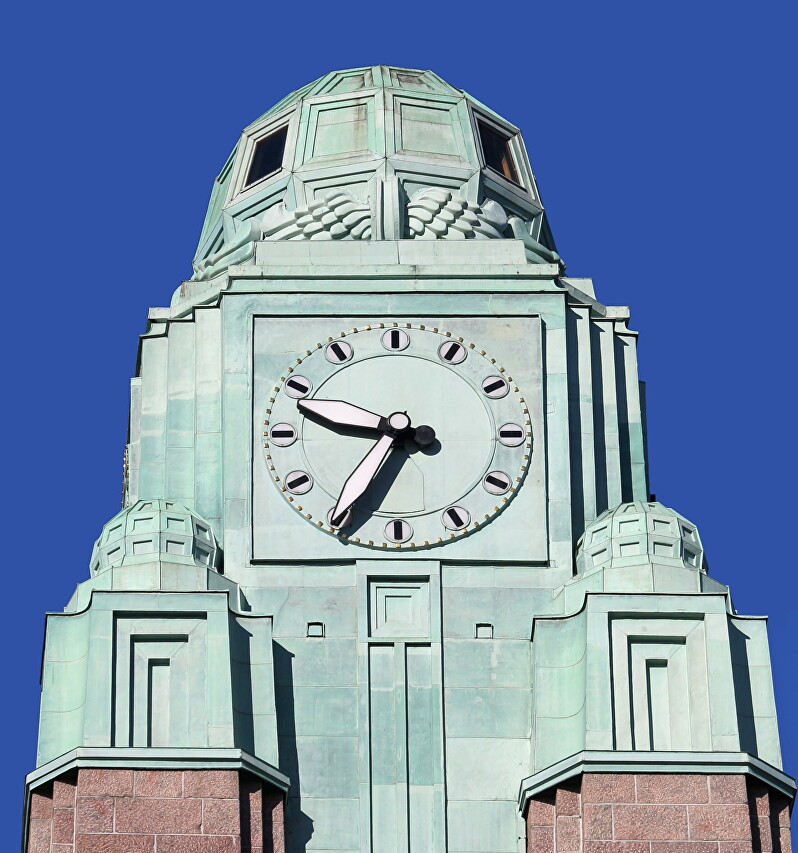 Statues of giants on the sides of the main entrance, holding globes-lights, the work of sculptor Emil Vikström. 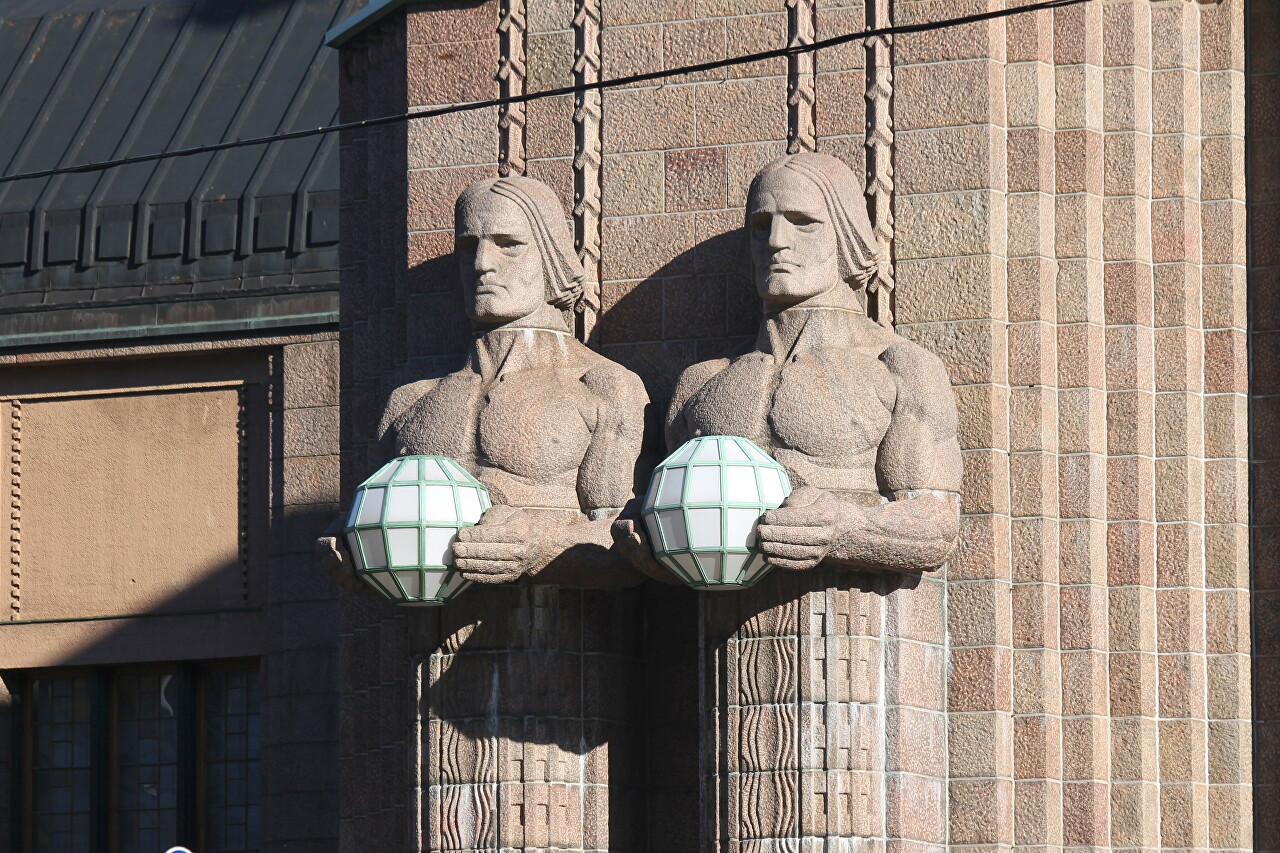 The prototype of strong tough men was the farmer Jalmari Lehtinen, the estate of which was near the house of the sculptor. 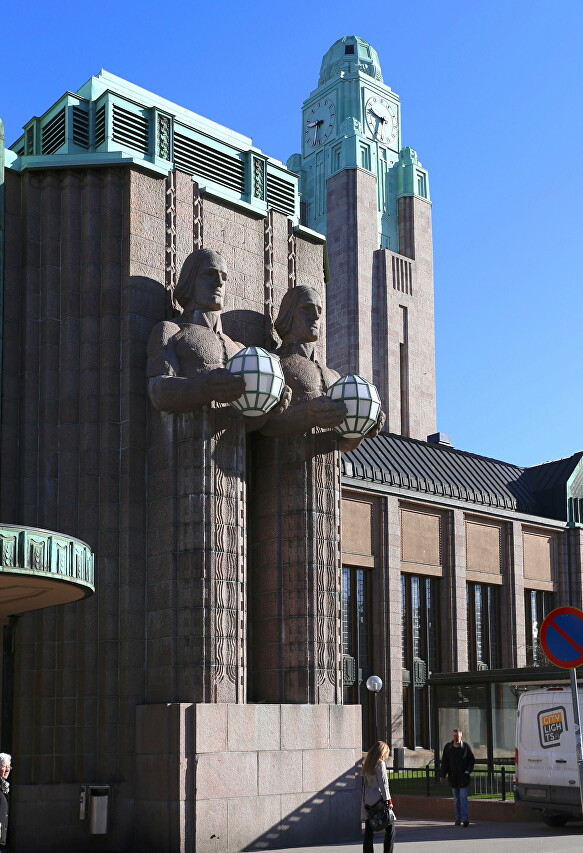 Side entrances are lined with copper, they are "protected" by granite pharaohs-lanterns. 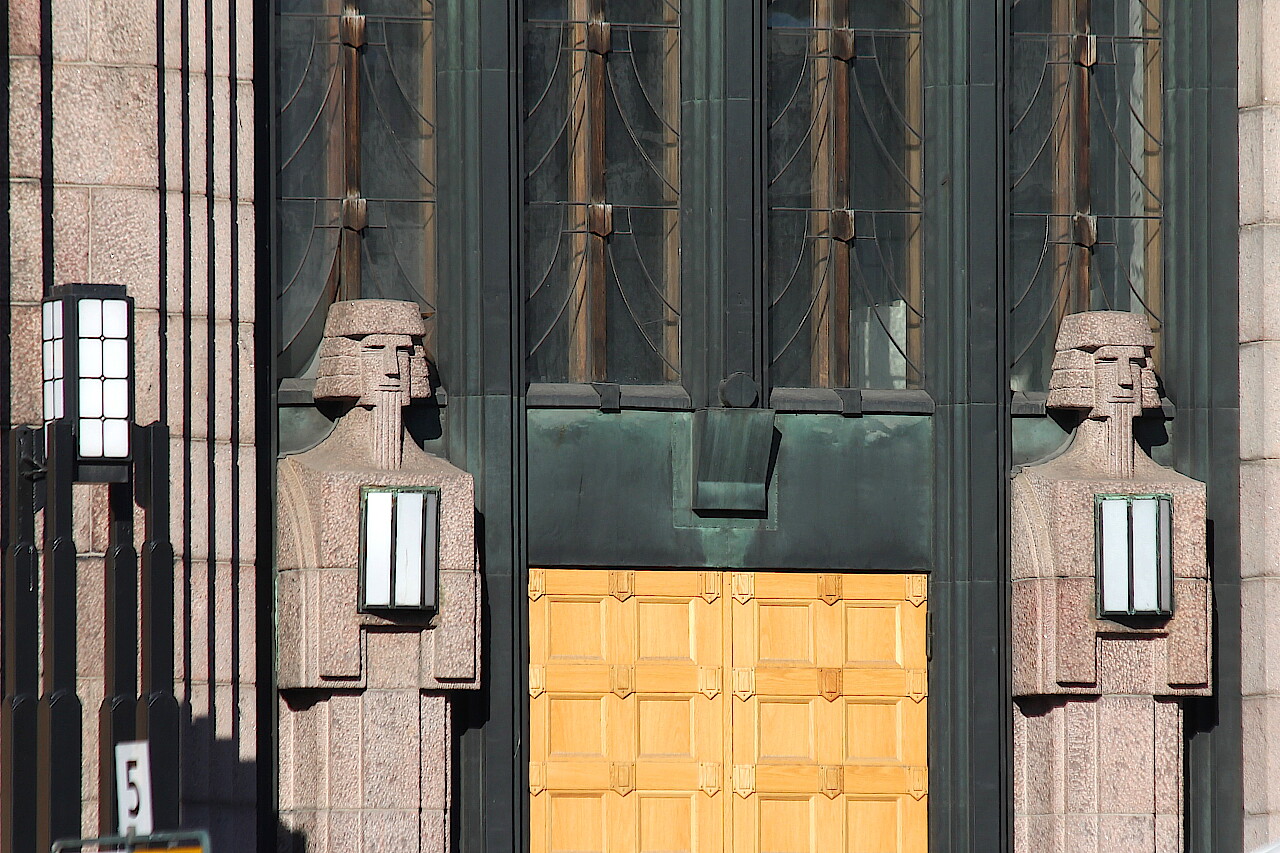 During the Second world war the station was greatly damaged by the bombing of the Soviet aviation. The first major damage to the building was in August 1942, but the greatest damage was done in February 1944, when 3 nights on the Finnish capital dropped 16490 bombs. The building was hit by at least two 250 kg bombs and dozens of smaller bombs, including several incendiary. Dozens of people were injured, although only one was killed, there were several large fires, the damage was huge, but the station did not stop its work. The next cataclysm took place on June 14, 1950, when one of the restaurants was ignited. The fire spread so quickly that the fire engulfed all the attics by the arrival of the first brigade of firefighters. Then the fire destroyed a wooden canopy over the platforms area of 3000 square meters. A column of smoke was visible even from Turku. Oddly enough, this time the trains continued to walk, stopping in 100 meters from the burning building. Also there were no deaths, only a few firefighters received light poisoning and injuries. Although the temperature in the main span was such that the mounting chandeliers were melted. The basements were flooded and the total damage was estimated at 30 million Finnish marks. The second surprising fact - the building was not insured, which is quite surprising, so all the costs of liquidation of consequences fell on the state. 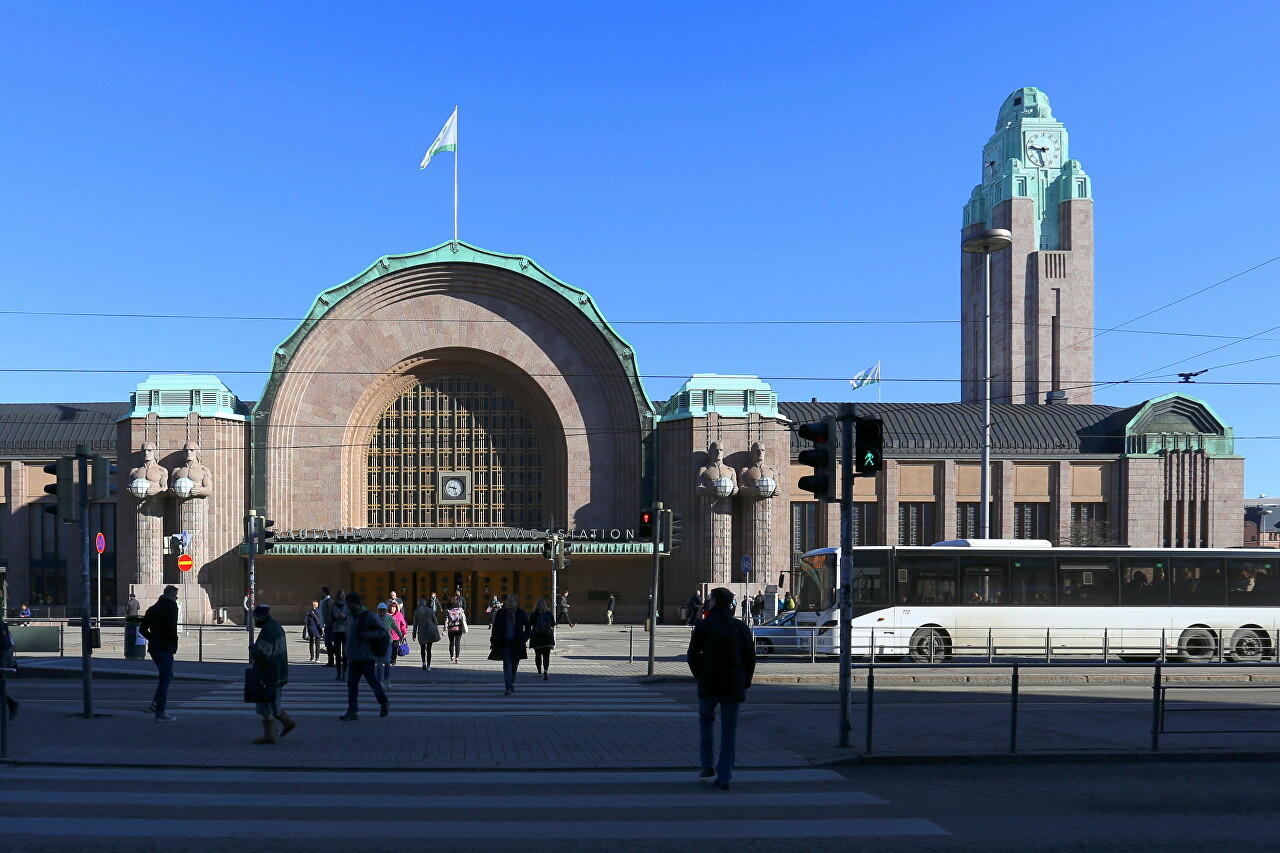 The Central station is the main transport hub not only in Helsinki, but also in Finland. In addition to national trains and trains there is a direct connection with Moscow (train 31/32 "Lev Tolstoy") and St. Petersburg (train "Allegro"). At the station Is Rautatientori metro station (Railway square), the busiest in the city. Vantaa airport can be reached by train (travel time 30 minutes, 10 minutes interval) or 615 bus for 5.5 euros and 50 minutes. The bus leaves from the station square, the stop in the middle row closer to the National theater. Traffic interval 20 minutes during the day, half an hour in the evening, 40 minutes at night. 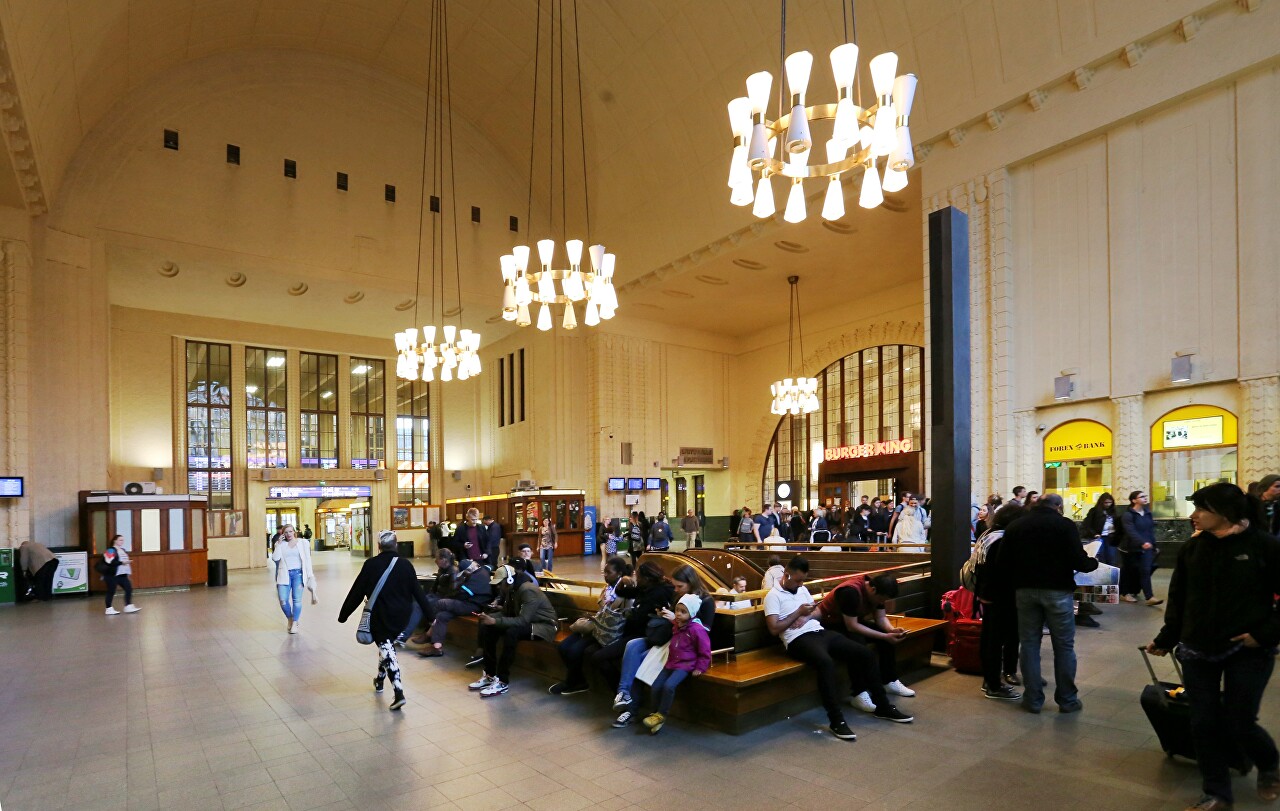 Interestingly, I saw on the doors of the station the opening hours, from 1:30am to 5am it is closed, in Finlnd no night trains. 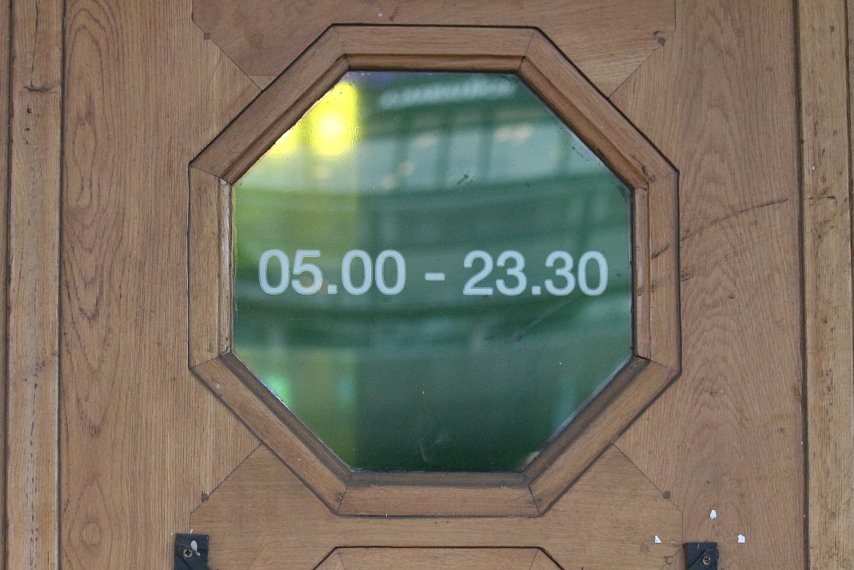