The best way to start exploring Barcelona and get a General idea of the city is to take the Montjuic funicular and then take the cable car to Mirador station. 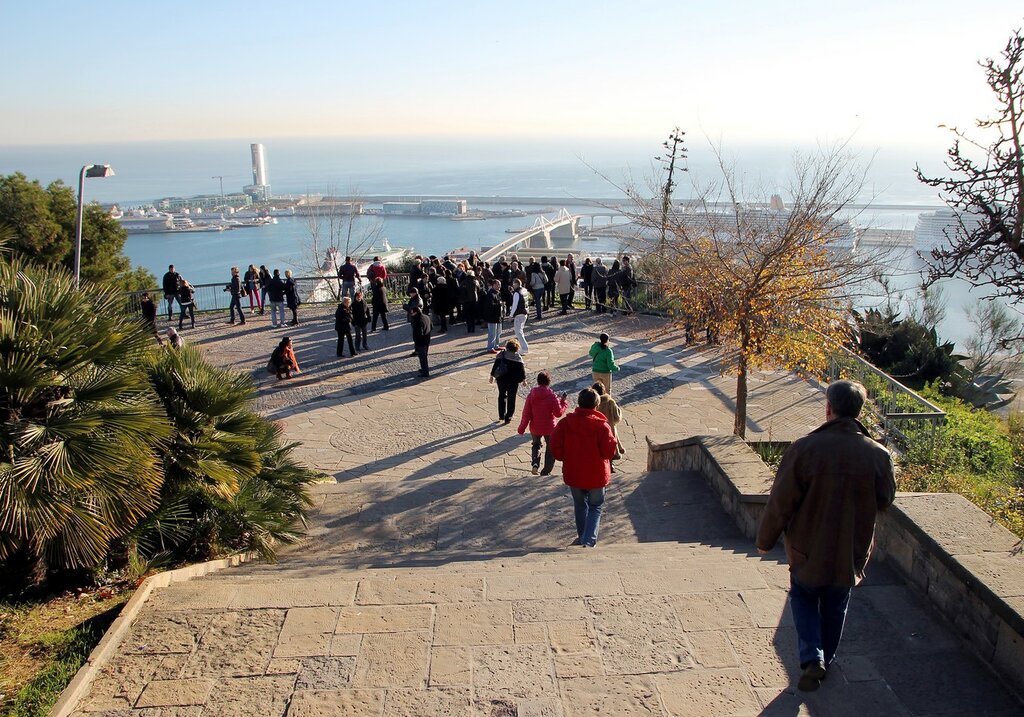 From here you can see most of Spain's second largest city. 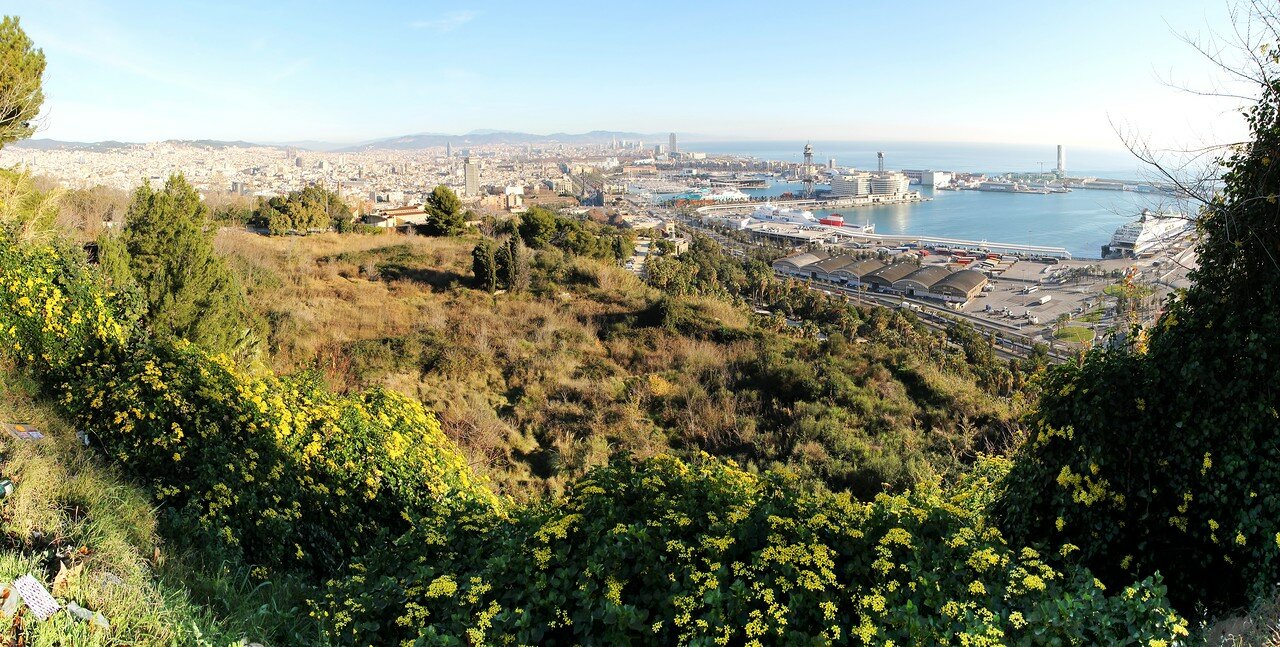 From the platform you can see all the main attractions of Barcelona, assessing their location You will easily and simply navigate the huge city. 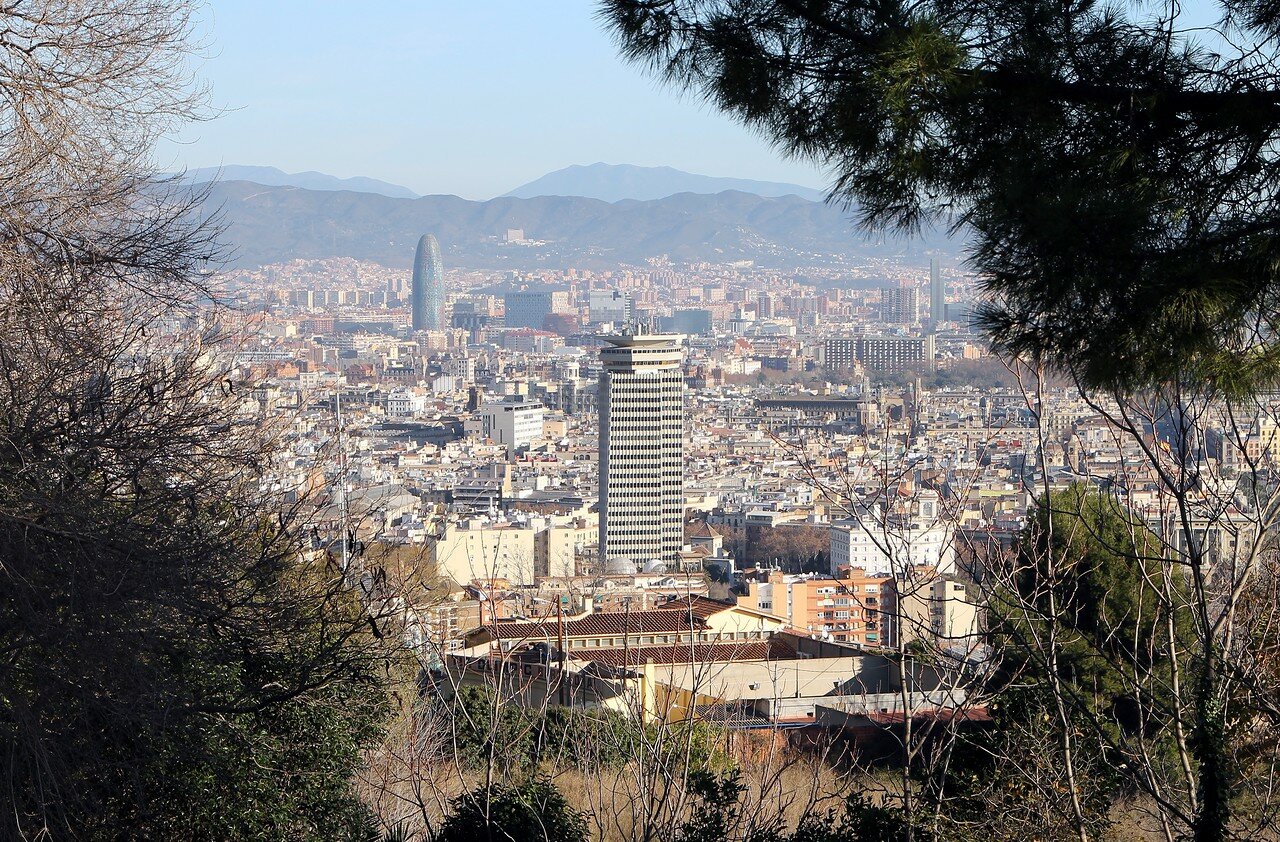 Let's start the city overview from left to right. We are looking at the districts of the Sarrio district, which are mostly modern buildings. Behind them is visible the top of the Tibidabo hill with the television tower of Collserola. 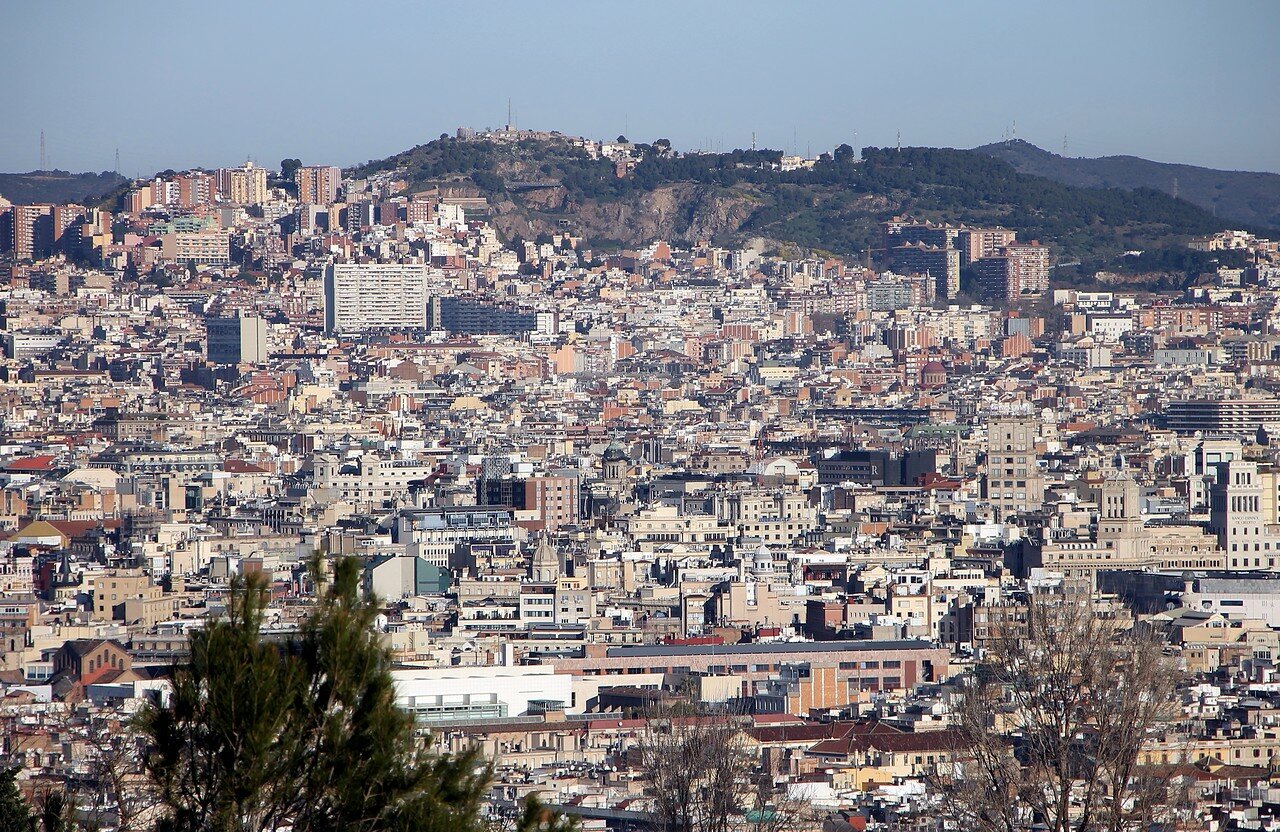 Then look to the East, where we will see the main pearl and the main long - standing building of Barcelona - the Sagrada Familia Cathedral, surrounded by construction cranes. The construction of this grandiose temple designed by the great Antonio Gaudi began in 1882. 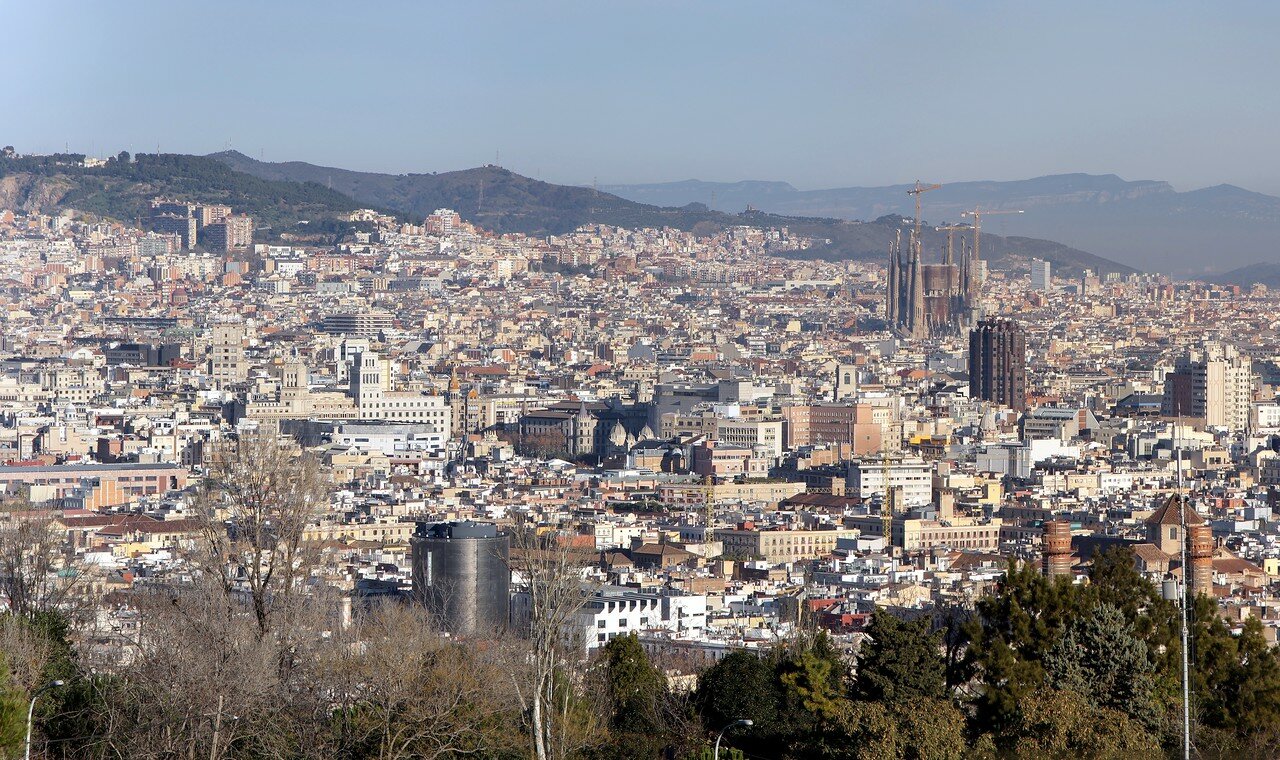 To the East and closer to us is the Gothic quarter-the historical center of the city. On the right - three towers of the Cathedral, on the left-the tower of the Church of Santa Maria del PI. 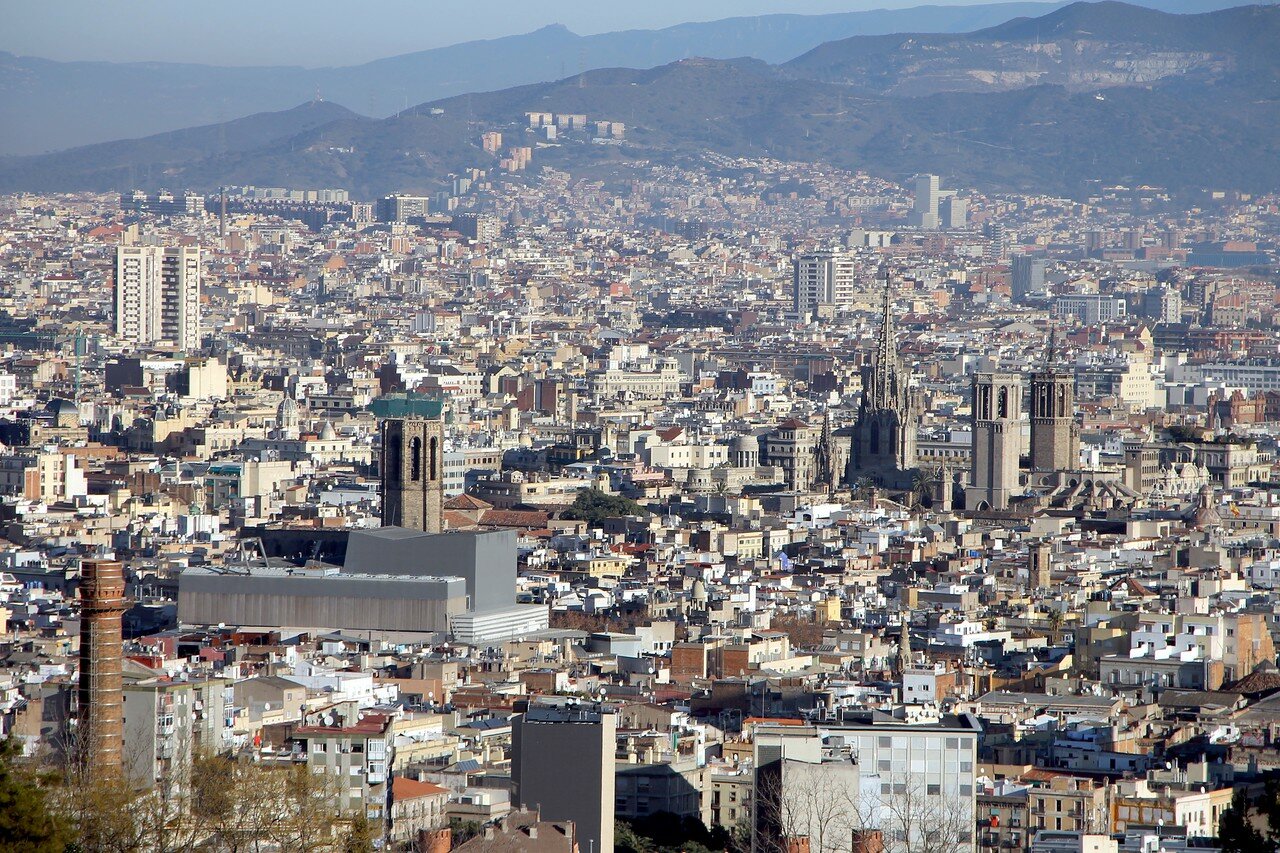 Far beyond the Gothico stands the "cucumber", the Glories tower, better known as the "Torre Agbar", one of the symbols of Barcelona. 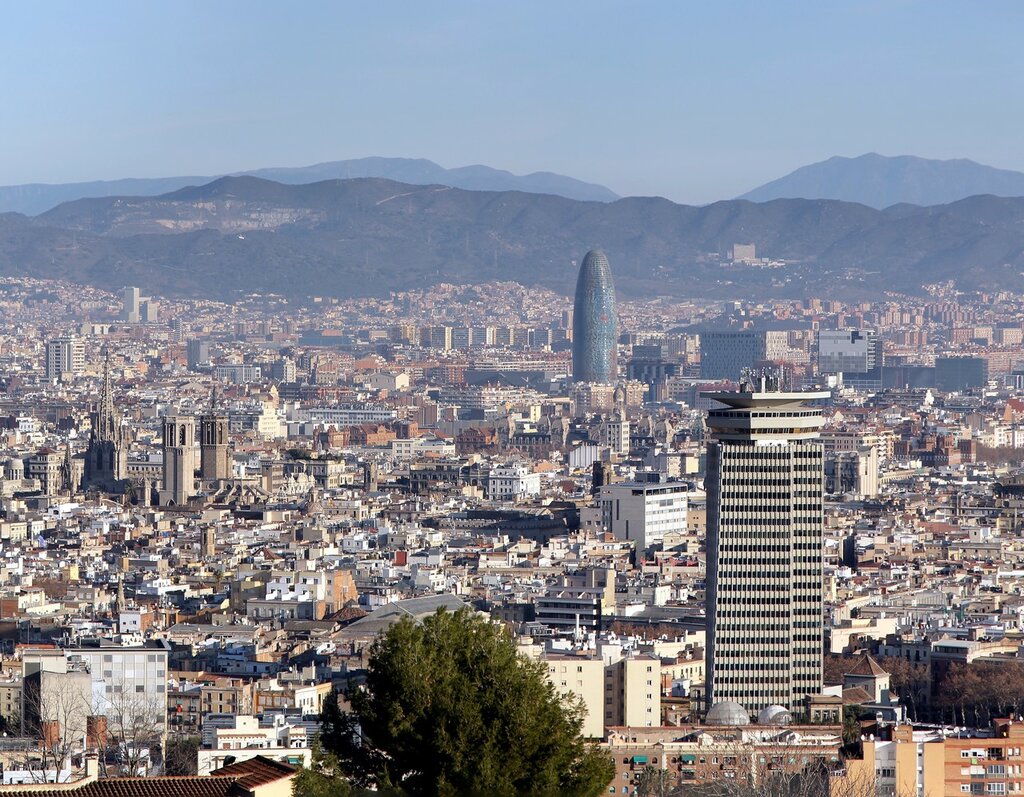 Closer to us is another high-rise-the "Columbus" skyscraper, the first building in Barcelona that overcame the one-hundred-meter height mark. 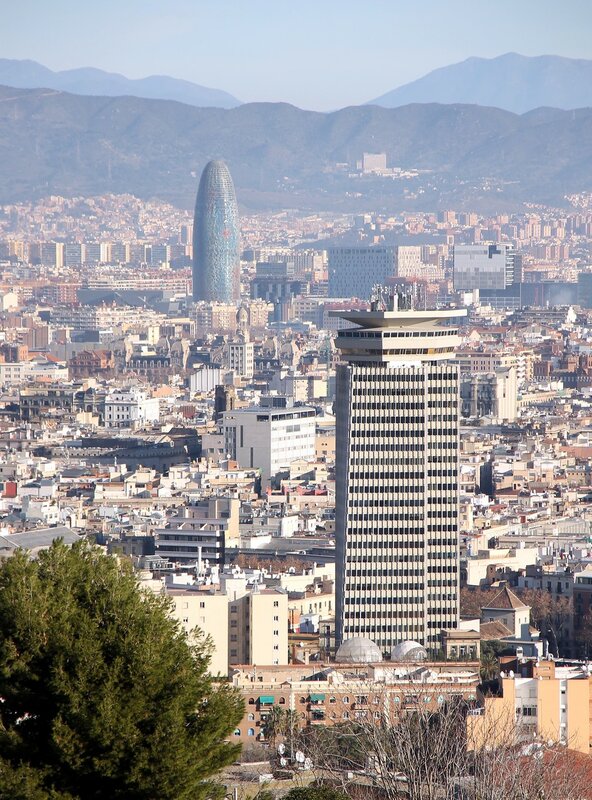 Let's shift our gaze a little more to the right. In the foreground - the seaside part of the Gothic Church with Merced, behind it you can see The post office tower, then-the Ribera quarter, where you can see the facade with a large round window (rose) of the Church of Santa Maria del Mar. Beyond the Ribera is the massif of the Ciutadella Park, with the glittering gold chariot of the Grand cascade fountain. 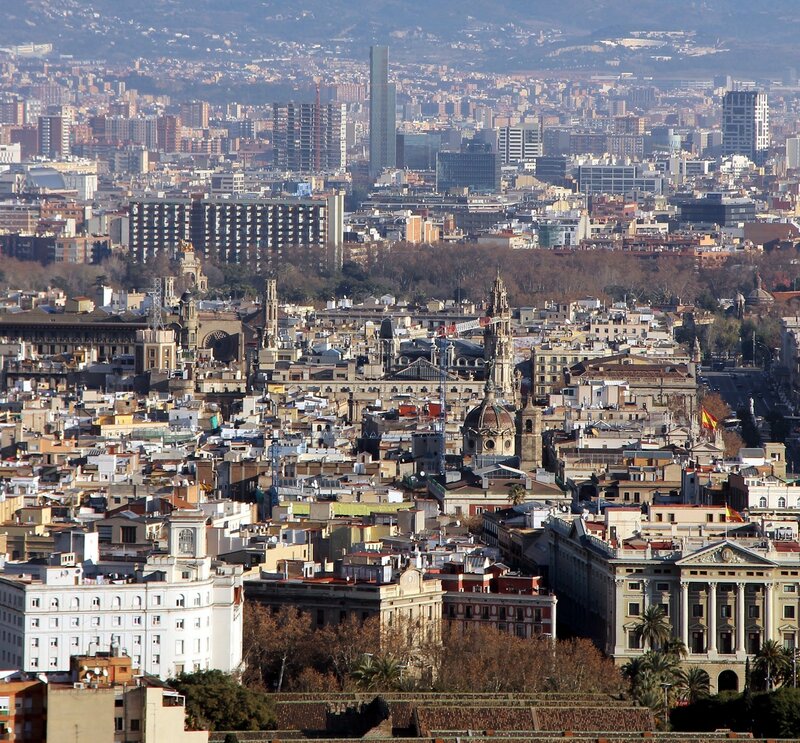 Seaside part of the city. In the distance, you can see the high-rise buildings of the Eastern districts, behind them the pipes of the Sant'adria power plant, popularly known as the "Three towers" (Tres Torres). 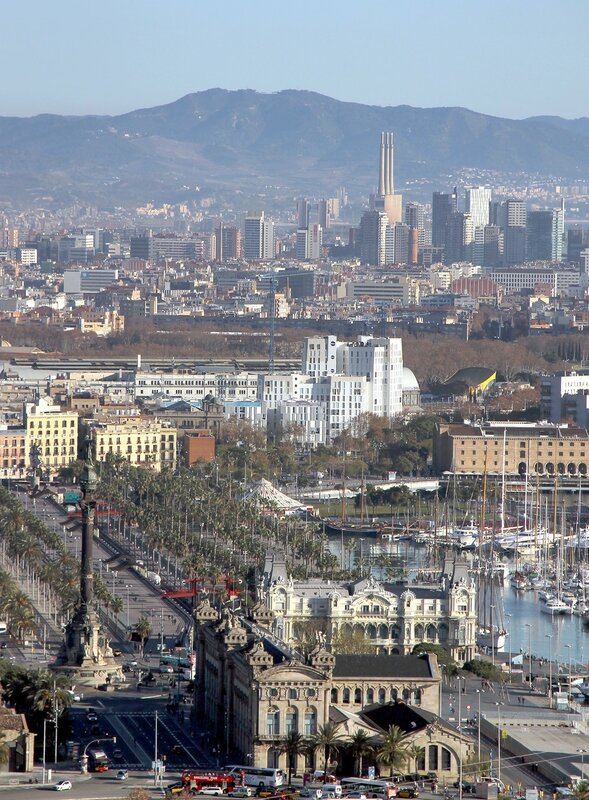 Behind the port you can see the building of the Museum of the history of Catalonia, behind the nm quarter of Barceloneta, even further away is the Olympic village with the high-rises "Torre Mare Nostrum" and the hotel "Arts". The art Nouveau water tower in Barceloneta Park is clearly visible. 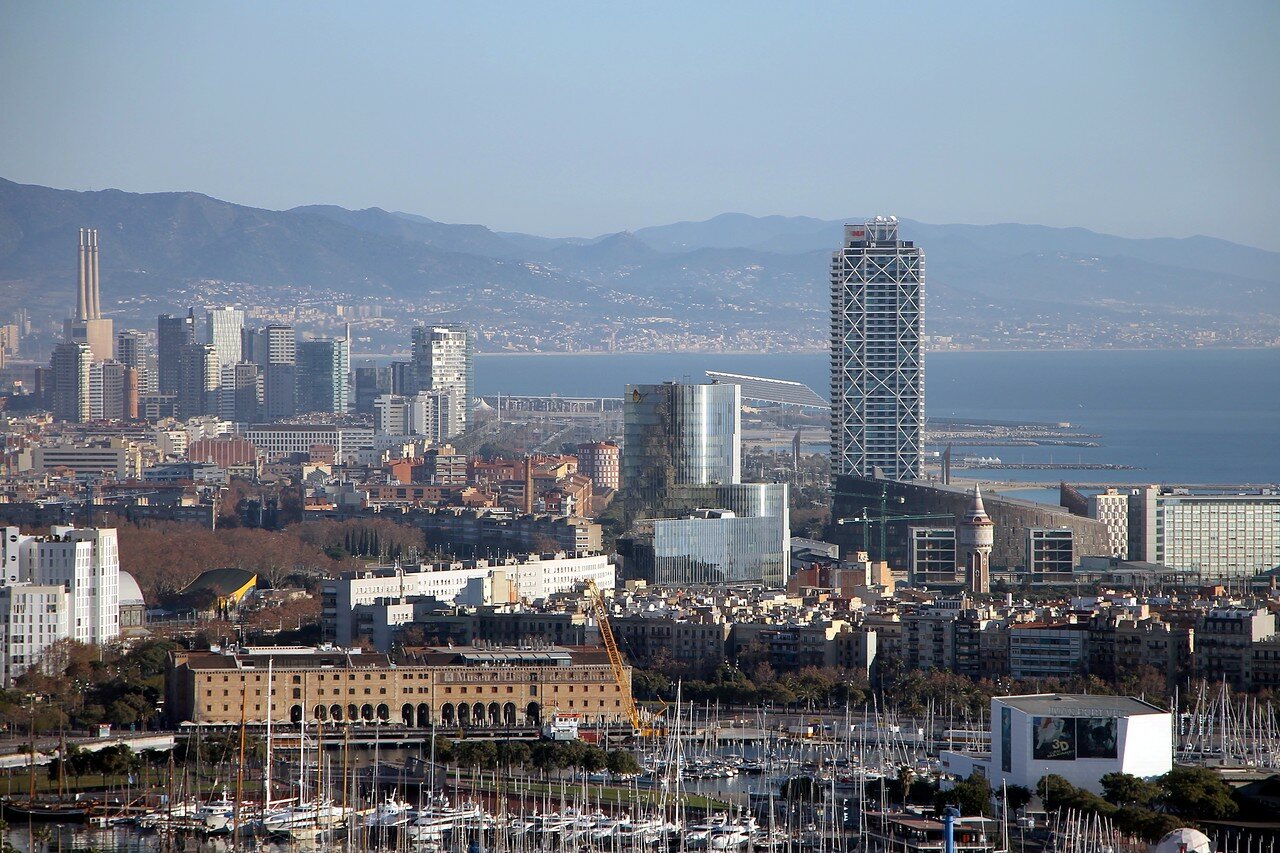 Right below us is the Column of Columbus, behind it is the Boulevard with the same name, the port Authority building, and the blue mirror of the port of vel itself, or old port. Along the waterfront stretches the palm Avenue Mole de La fusta, where the schooner Santa Elualia is moored (looks out to the right of the port Authority), a floating exhibit of the Maritime Museum. 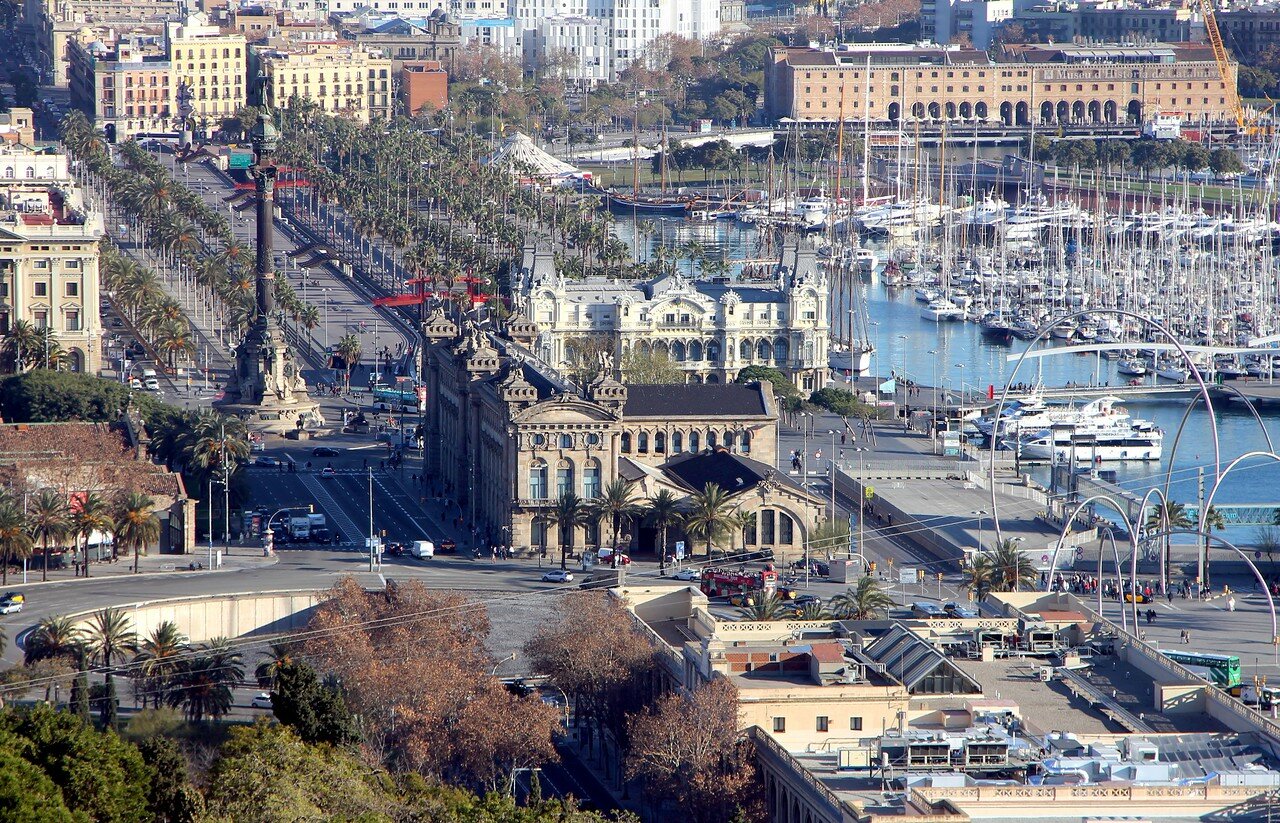 A passenger port, where The balearia ferries are moored, making flights to the Islands of Ibiza and Palma. Behind it, you can see the undulating structures of the Rambla del Mar bridge leading to the MareMagnum shopping center. 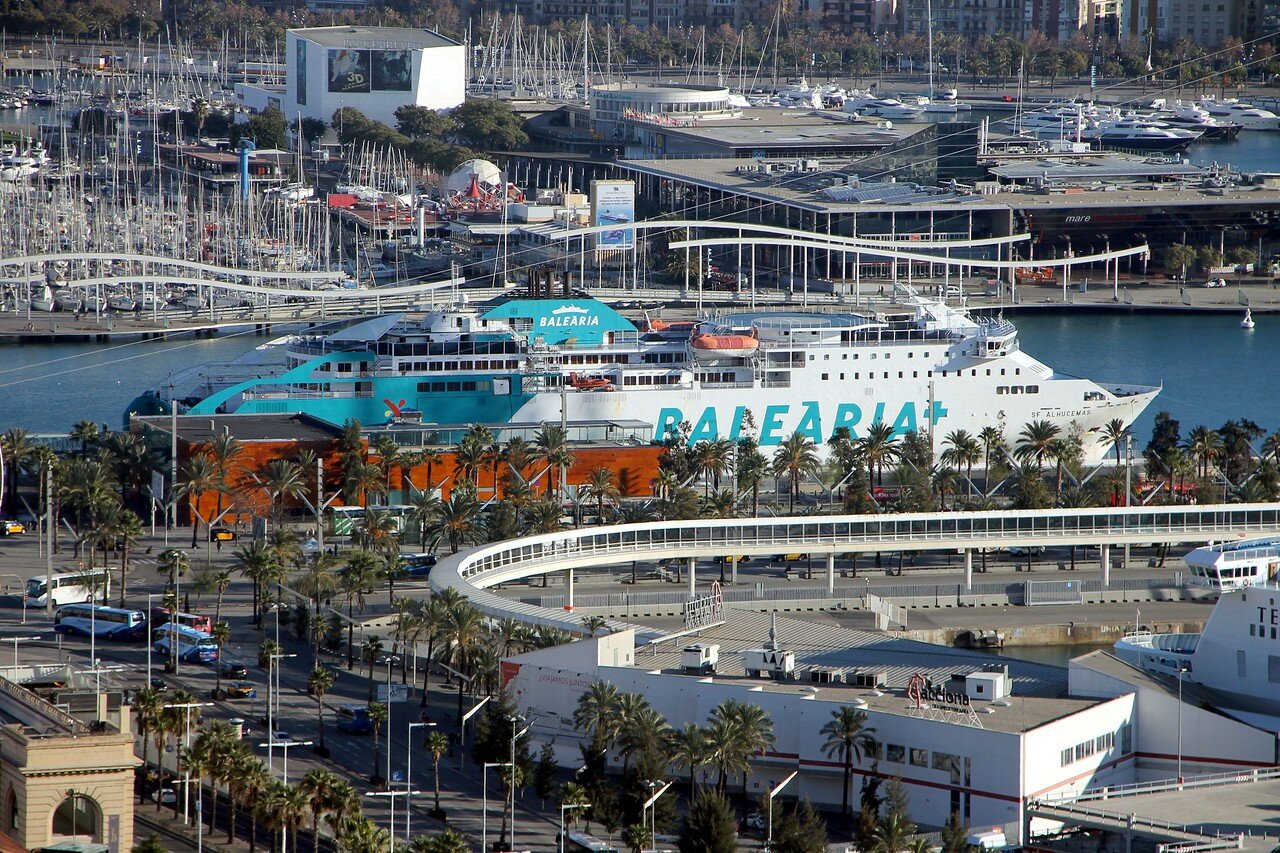 We will complete our tour of the panorama of Barcelona with pier 18, where the Jaime I tower of the Teleferic del Port cable car and the world trade center building are located. Behind the Shopping center, you can see the beach of San Sebastian, and another cable car tower, also bearing the name "Torre San Sebastia". 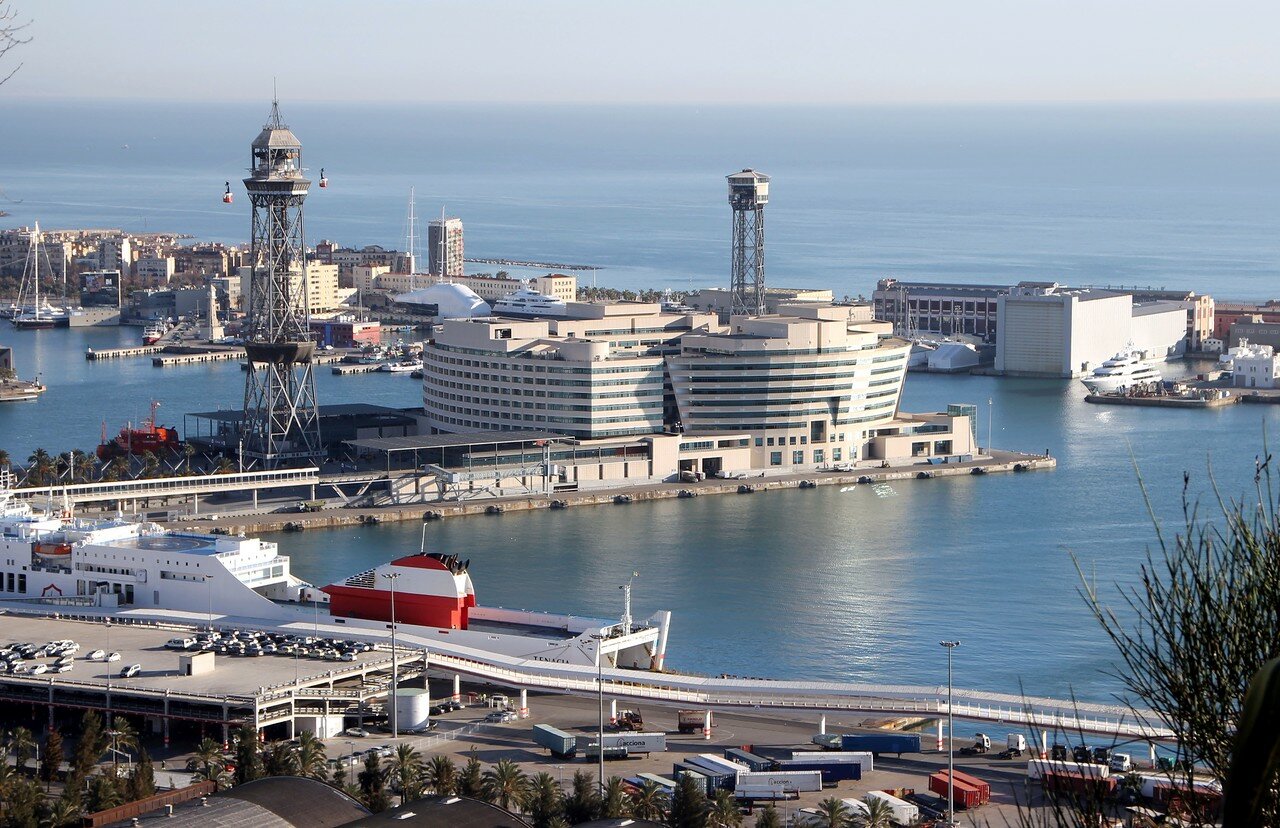