The De Wallen district is located in the heart of the old part of Amsterdam. Its history began at the end of the 14th century, with another expansion of the city's territory. Prior to this, Amsterdam was bounded on the east by the Oudezijds Voorburgwal canal, the bank of which was fortified by an earthen rampart with a palisade. In 1385, a new canal was dug to the east, called Oudezijds Achterburgwal, can be translated as "behind the wall". The area between the canals was named De Wallen, or De Walletjes (Small walls). 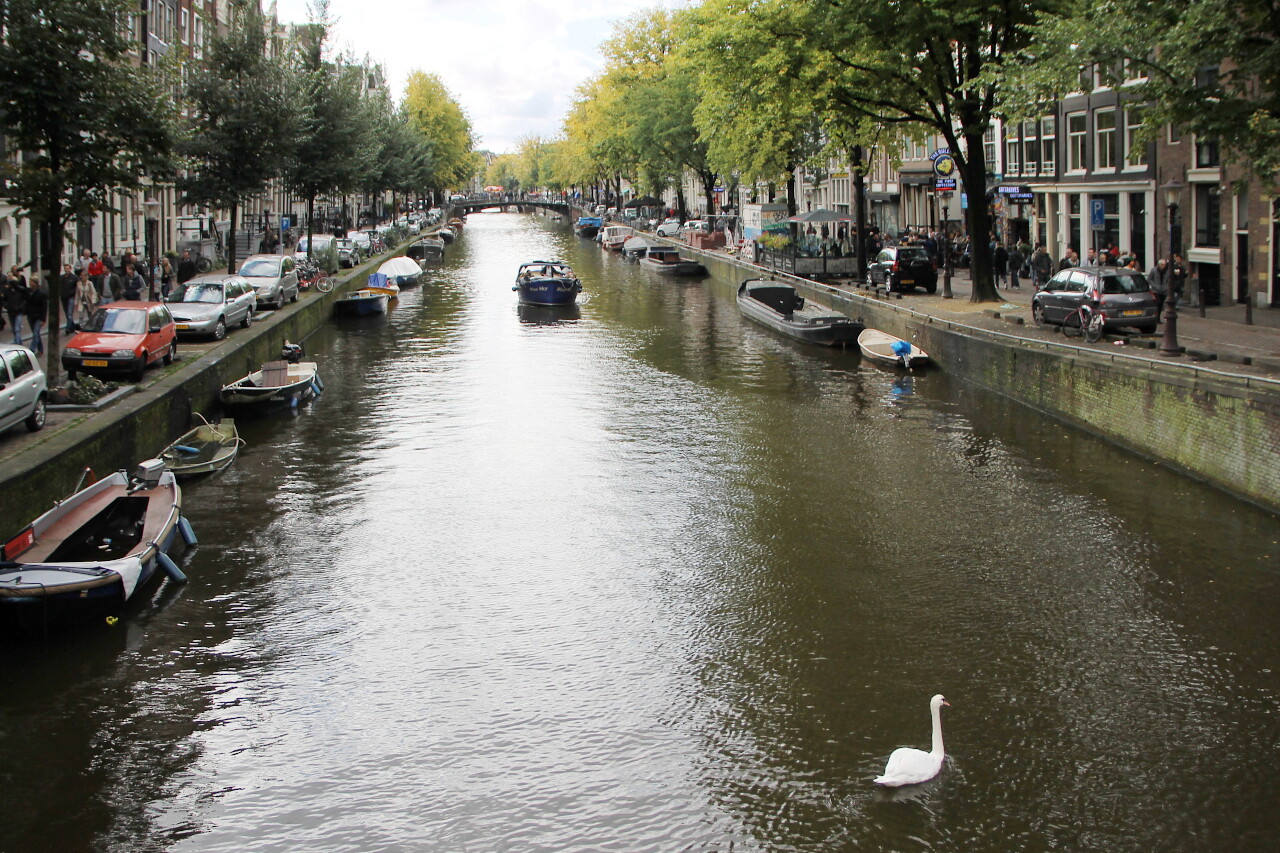 Initially, Calvinist monks settled here, but the proximity of the port attracted a completely different audience. As you know, sailors after a long voyage have a great demand for female society, and women began to settle along the canals, earning a living by selling love. Many flophouses for sailors and migrants were opened here, and the quarter soon turned into an unsafe place. In the 16th century, the monks were given land in a quieter area, and since then the quarter has finally established its reputation as a hot spot. The authorities tried to combat this social vice, but in the end, in 1988, the Dutch Government took control of the sex industry, legalizing prostitution and taxing it. 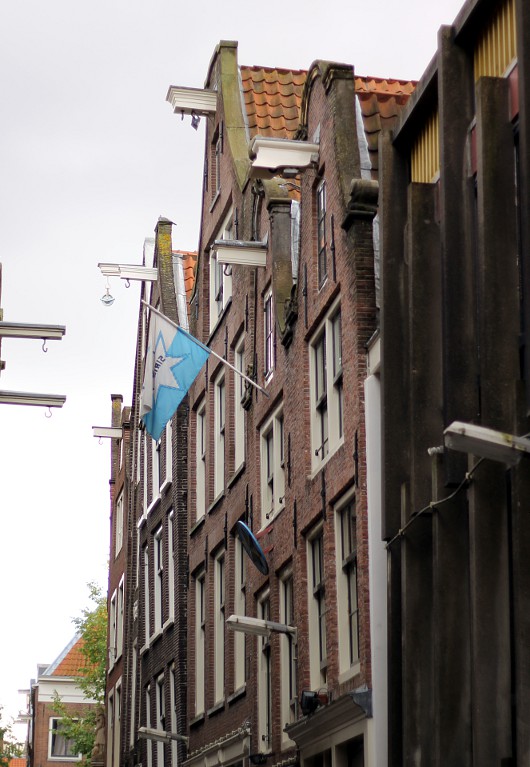 After walking one block from the National Monument along Damstraat street, you will find yourself on the embankment of the Oudezijds Voorburgwal canal. The Red Light District stretches along the banks of the canal north to Lange Niezel street. It is lively at any time of the day or night. 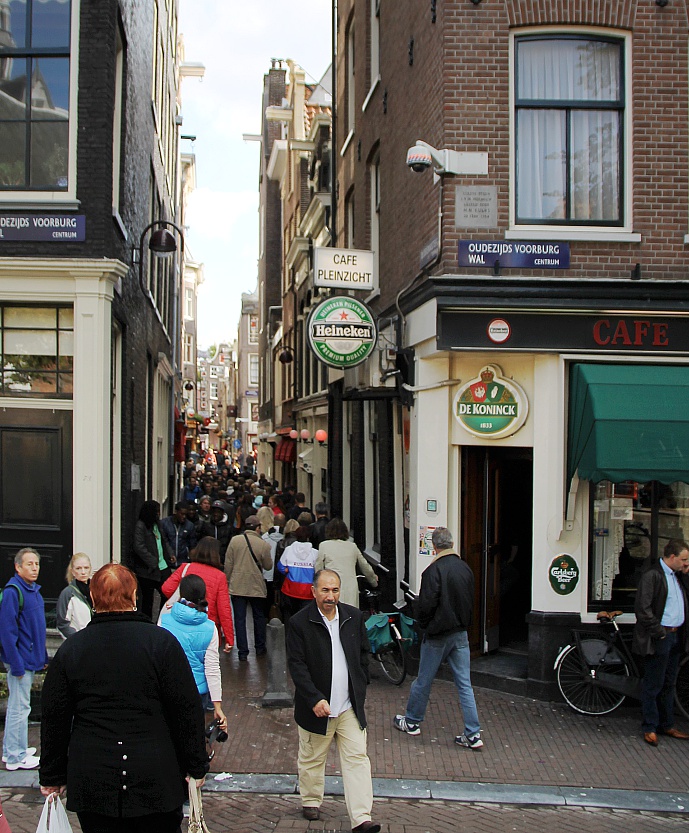 The "Indecent Quarter" consists of several narrow streets, along which there are apartments of prostitutes and establishments specializing in the satisfaction of a wide variety of sexual desires, as well as in the sale of accessories for love joys. 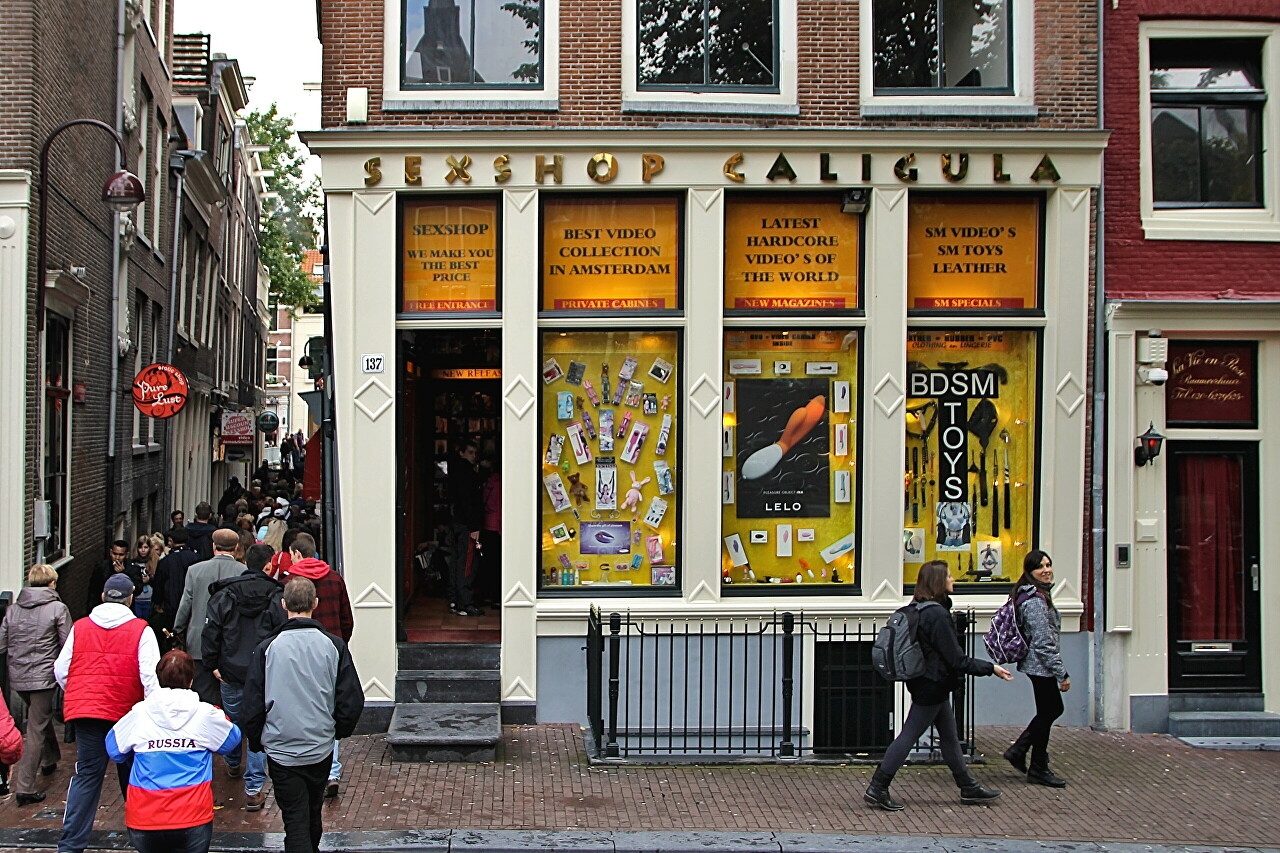 The symbol of the quarter - the girl outside the window - is the main form of advertising the local "product". The technology of selling love is very simple and effective - the first floors of buildings are a series of small rooms with large glass windows, behind which the bed workers flaunt their charms. If the customer shows interest, the window opens, and after agreeing on financial and other details, the curtain is lowered. The usual price for a session lasting 15-20 minutes is 50 euros, but you can find it for 30 if you want. These are, so to speak, "basic prices", the final price depends on the duration of the "romantic date" and the wishes of the client. Of course, the rooms are equipped with everything necessary for hygiene, and the "workers" regularly undergo medical examinations, and at the expense of the state. 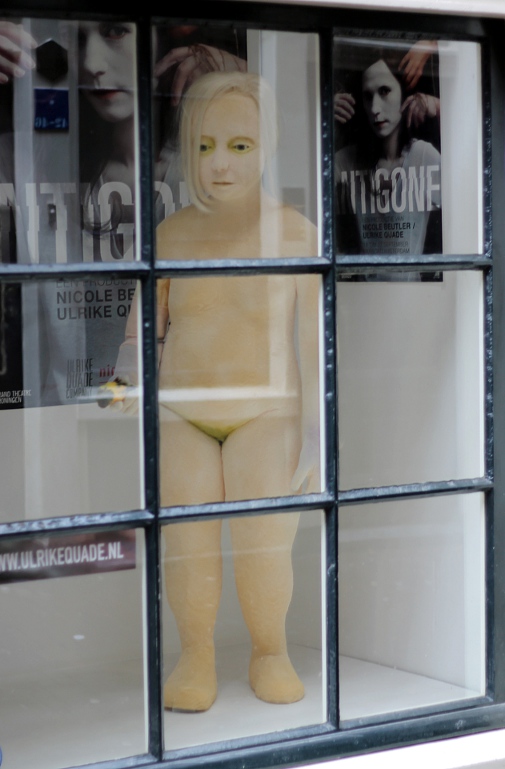 Above each display case hangs a flashlight, usually in various shades of red, hence the name. This is not a Dutch invention, as many believe, the first mention of such a distinctive sign for a brothel refers to the port city of Sandusky, which is on the shore of Lake Erie in the United States. Now this term is called brothel areas around the world. 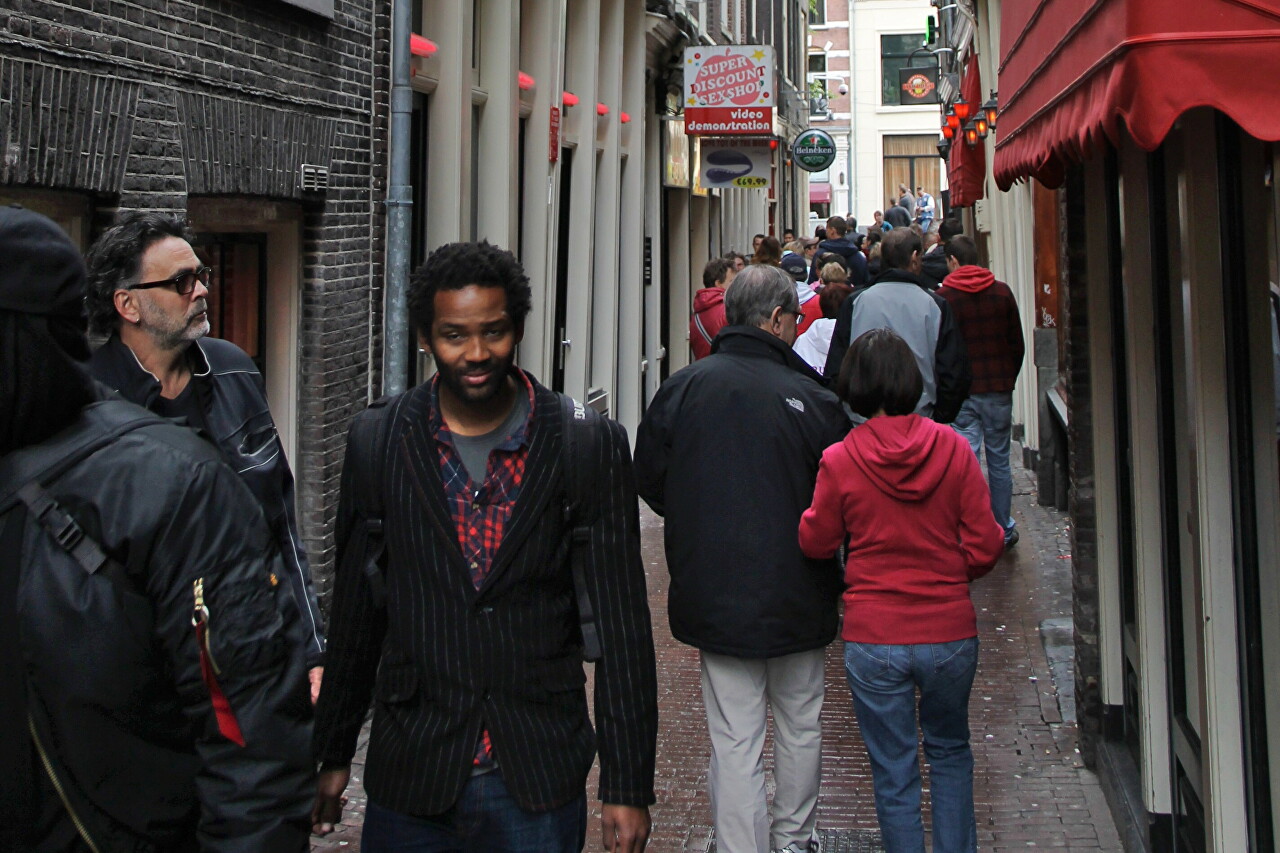 A distinctive feature of the Amsterdam Red Light District from other similar places is that not all representatives of the oldest profession are "fallen women" who sell their bodies for a piece of bread. Someone does it "for the love of art", or out of boredom, as some housewives do secretly from their husbands. Among the youngest, there are many students who work part-time in their free time. Therefore, it is forbidden to photograph shop windows - the security services are vigilant about the anonymity of their employees, and it is not recommended to contact them, since the police will take their side in the event of a conflict. Among prostitutes, there are many migrants from other countries, but only EU citizens can engage in this craft. 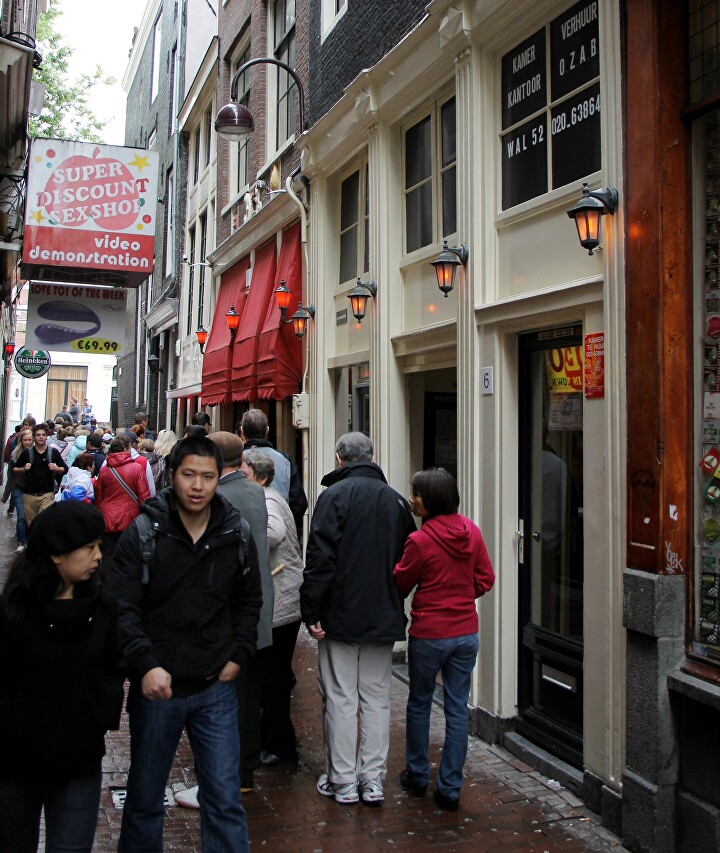 Now the selling love is concentrated in the streets perpendicular to the canal, but even here you can see the apartments, the purpose of which is indicated by the red stripes on the windows. 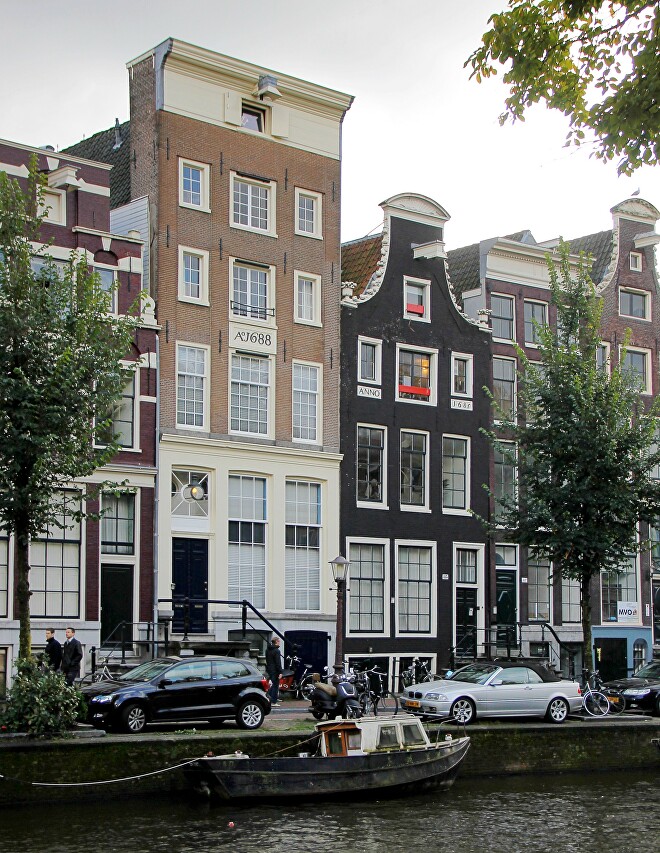 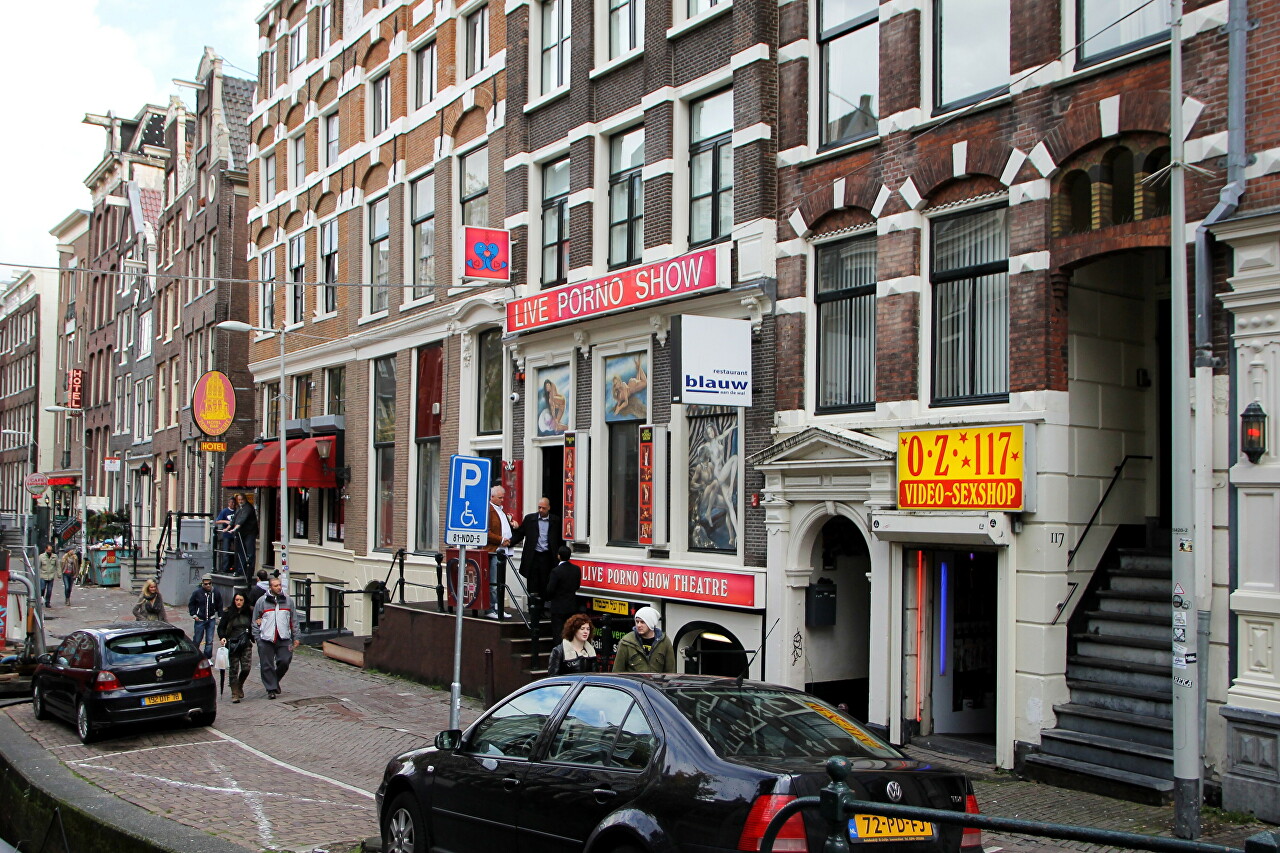 The Casa Rosso Theatre, founded in 1969, is located on the Oudezijds Achterburgwal, 146. Here they show not only striptease, but also real sex on stage. The establishment was tried several times to close down on suspicion of money laundering, but it stopped working only after a fire in 1983. The arson was set by an employee who was dismissed the day before, and 13 people died in the fire. After the renovation, the theater resumed its activities. The theater is open from 7 pm to 2 am, on Friday and Saturday until three. The performances are non-stop, you can come at any time. Naturally, visitors must be at least 18 years old. The cost of a "dry" ticket is 40 euros, and including two drinks is 50 euros. Tickets can be purchased online, it will be 2.5 euros cheaper. 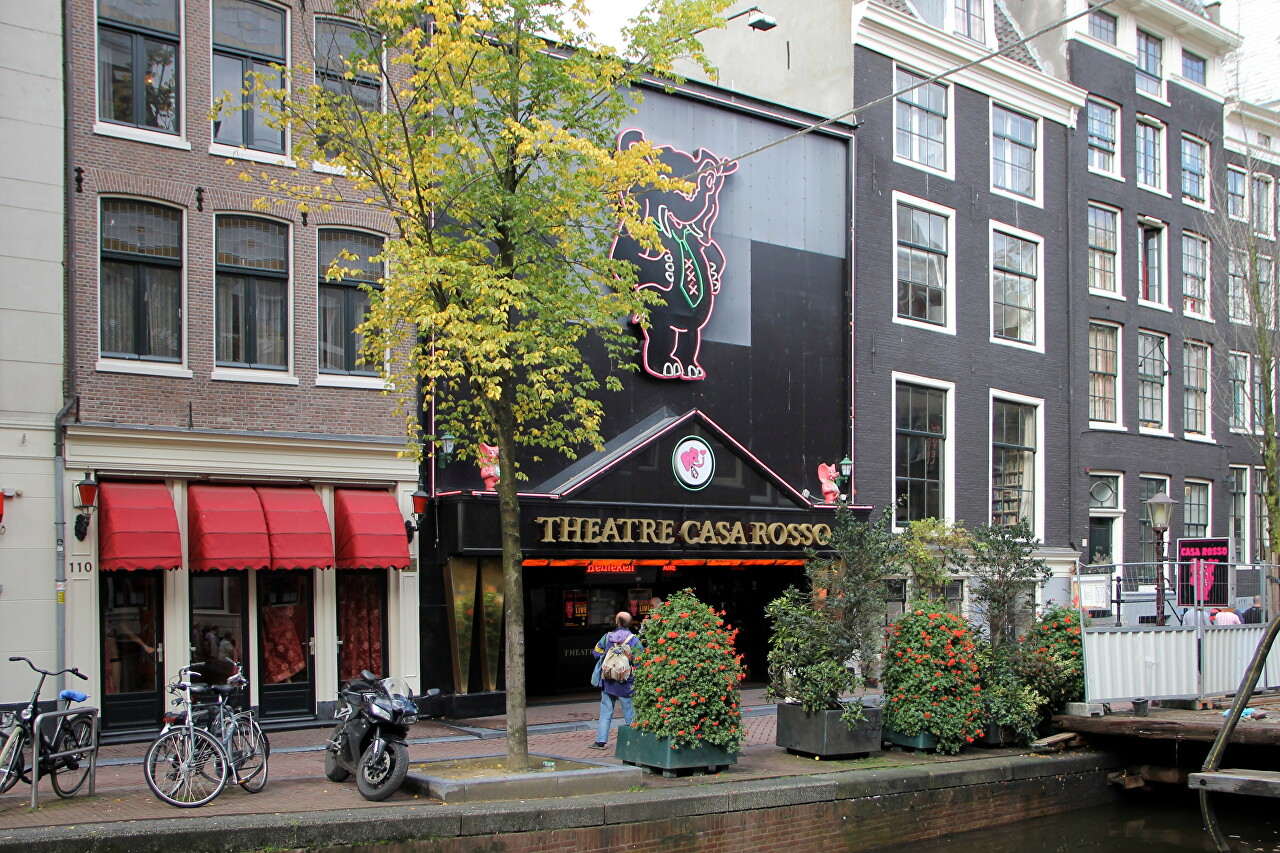 Similar performances can be seen at the Moulin Rouge sex club, located on Oudezijds Achterburg 5. Here it is cheaper-the entrance ticket costs 30 euros, paying 40 euros, you will get 4 tokens for receiving drinks. From Monday to Wednesday, the club is open from 20: 00 to 2 am, from Thursday to Sunday from 14: 00. It is customary to go here in large companies. 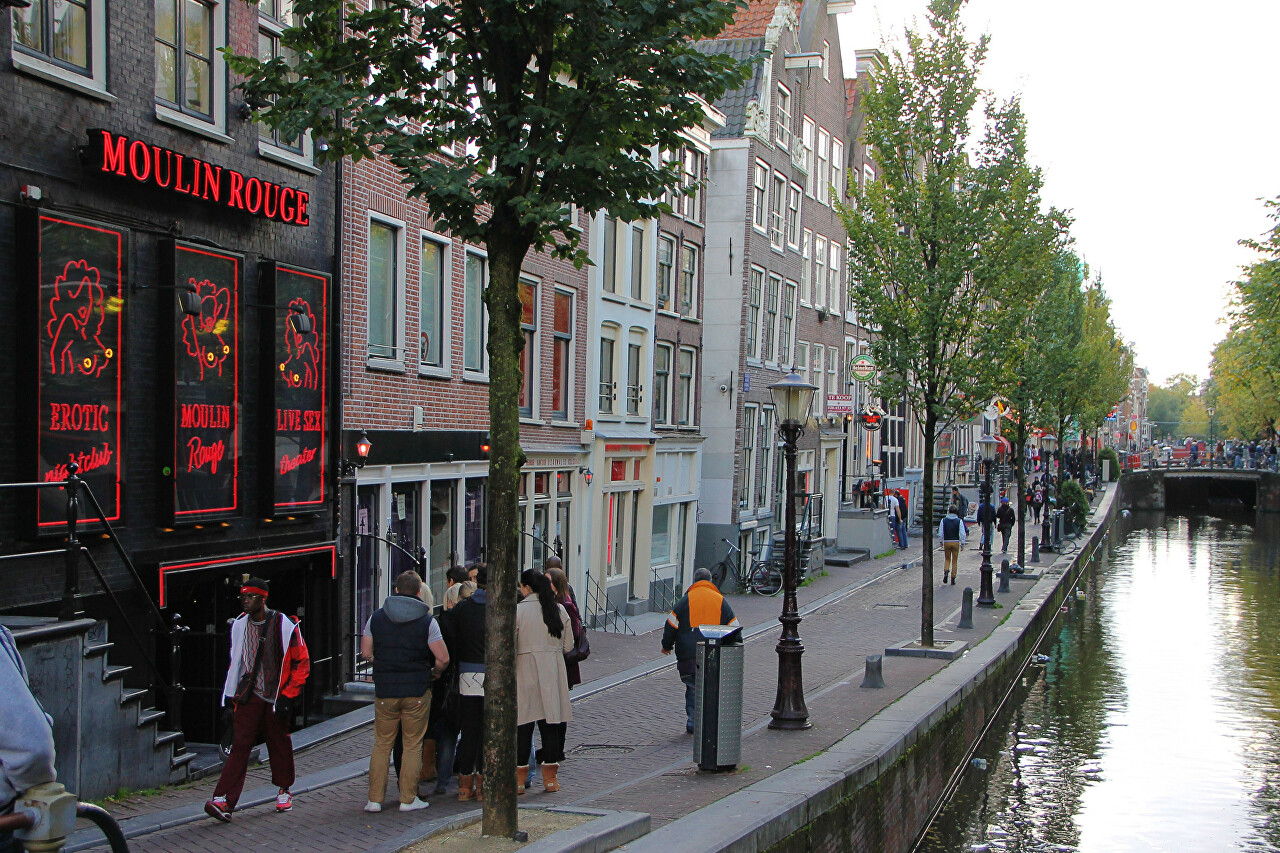 Souvenir shops and art galleries in the quarter also differ from the usual kind of assortment. 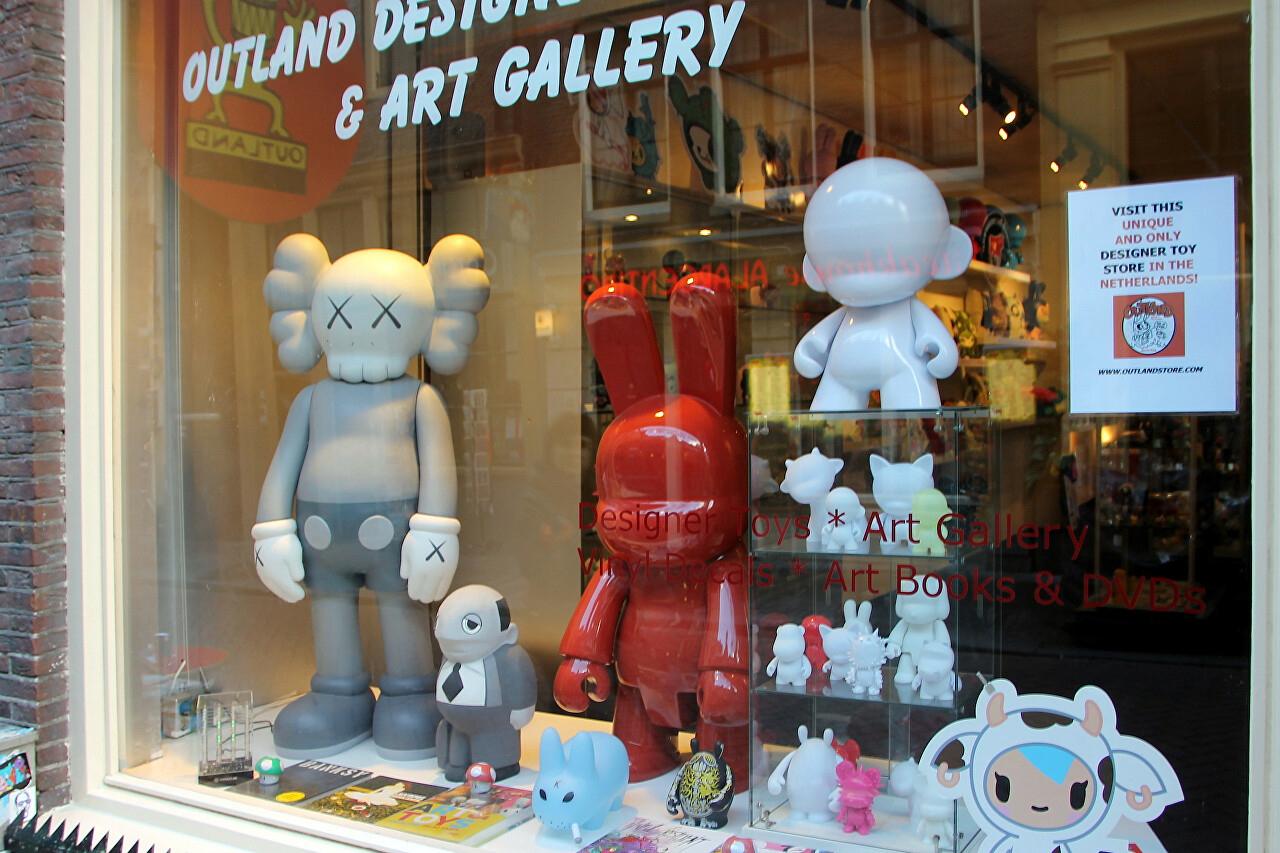 Of course, in such a quarter, you can find many establishments under the general name "Coffeeshop", where it is quite legal to get another kind of pleasure - to smoke weed or taste "magic (literally "cosmic") cupcakes" with hashish. 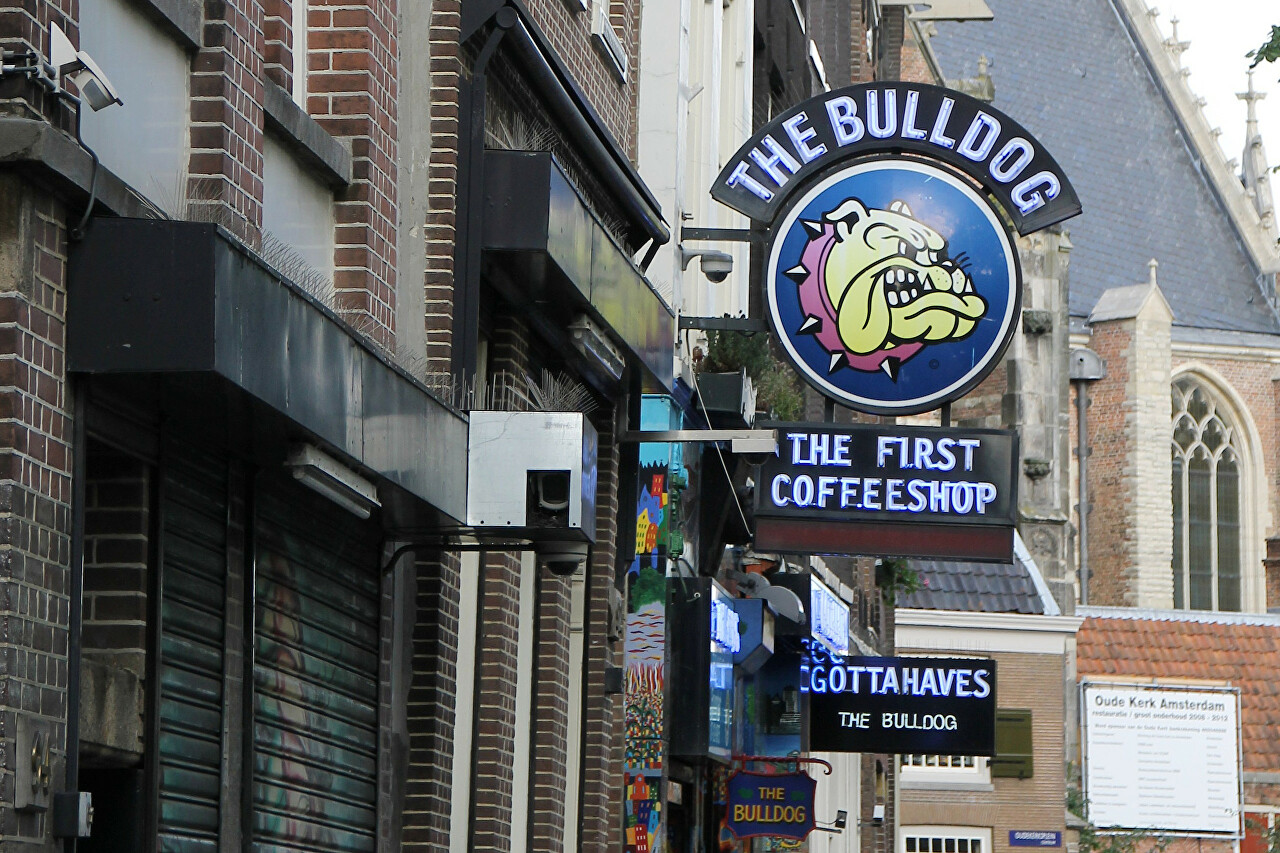 In one of the nooks and crannies, I saw an interesting structure designed to protect the wall of the building from those who like to relieve themselves wherever they have to. The structure is made so that you can urinate in this secluded corner only by soiling your trousers and shoes with your own secretions. 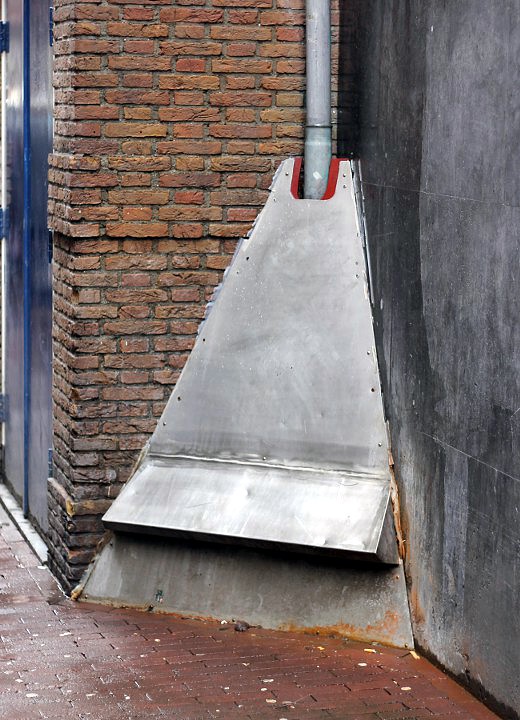 In conclusion, I want to add that this is not the only hotbed of debauchery in Amsterdam, such services are provided on the embankment of the Flower Market, as well as in the De Pijp ("pipe") quarter, where artists and other bohemian public live.