On the northern shore of Riddarfjärden Bay is the most recognizable building in the Swedish capital, Stockholms stadshus, one of the main symbols not only of the city, but also of the country. Its history began in the early twentieth century, when the Stockholm City Council raised the issue of building a common administrative building for the city administration and the city council. The first step was to decide on the construction site. The Hohtorget area in Norrmalm was considered, and Tikje was considered one of the quarters in Gamla Stan, but in 1902 it was decided to acquire the Eldkvarn quarter on the south-eastern cape of Kungsholmen Island. The quarter got its name from the steam mill, which became famous for a huge fire in 1878, but was restored and continued to work. In December 1903, an architectural competition was announced for Swedish architects. Works by Carl Westman and Ragnar Östberg reached the final stage. In 1906, the city council decided to adopt the Östberg project, which on its own initiative had been working on it since the late nineties of the last century. The massive building with arcades and a tower resembled the Doge's Palace (Palazzo Ducale) with the Campanile of St. Mark in Venice, this solution was completely new and unusual for Stockholm. In October of the same year, demolition of the mill began, but construction began only in 1911, as the economic crisis broke out in 1907, and the project was reworked several times, at the request of the Council, Östberg included some elements from the Westman project, so the final version was presented only in 1913. 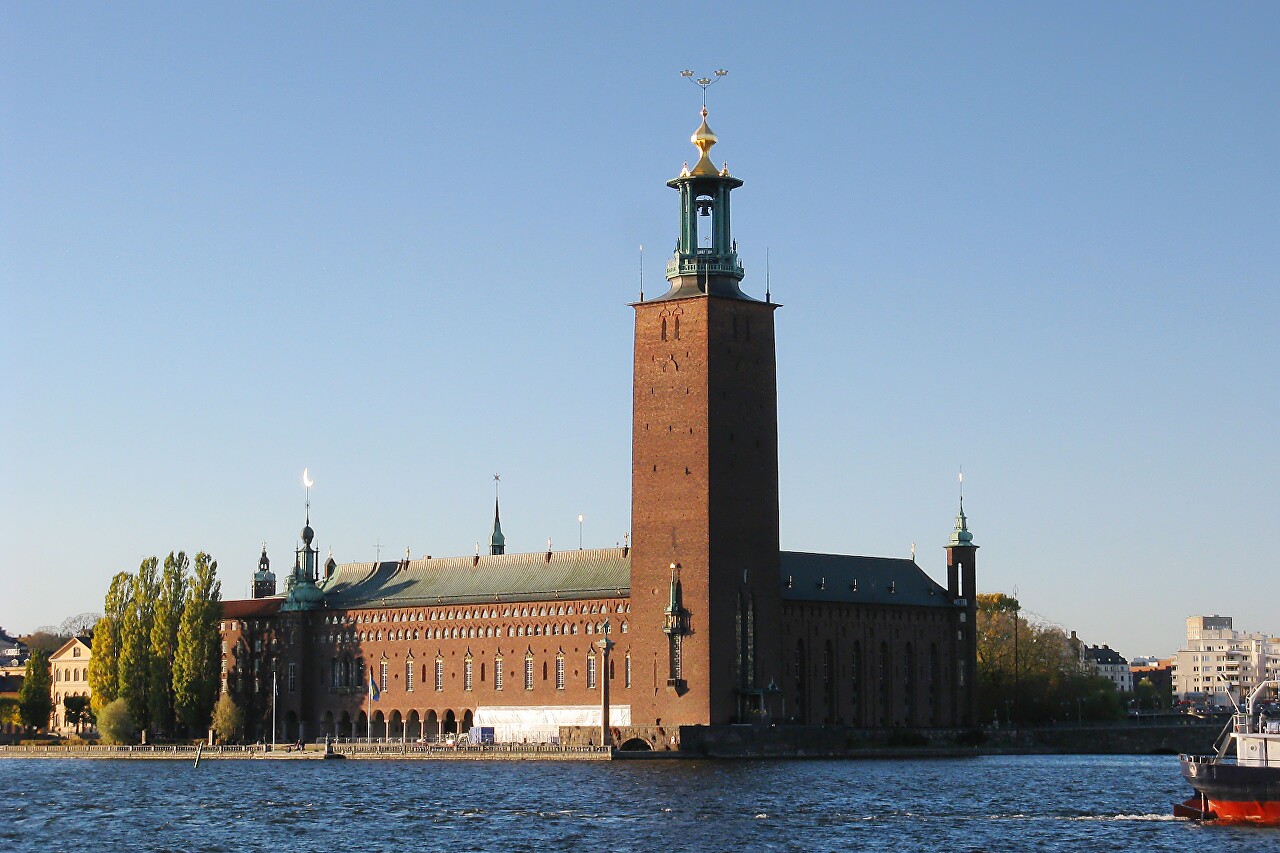 As mentioned, Östberg was inspired by the Doge's Palace and its location by the water, but that's where the similarities end. The exterior and interior of the town hall bear the features of Scandinavian Gothic, Byzantine and Islamic art, which Östberg surprisingly harmoniously combined in his project. Many details of the decor also remind you of the history of Stockholm. The result is one of the masterpieces of Swedish national romanticism. 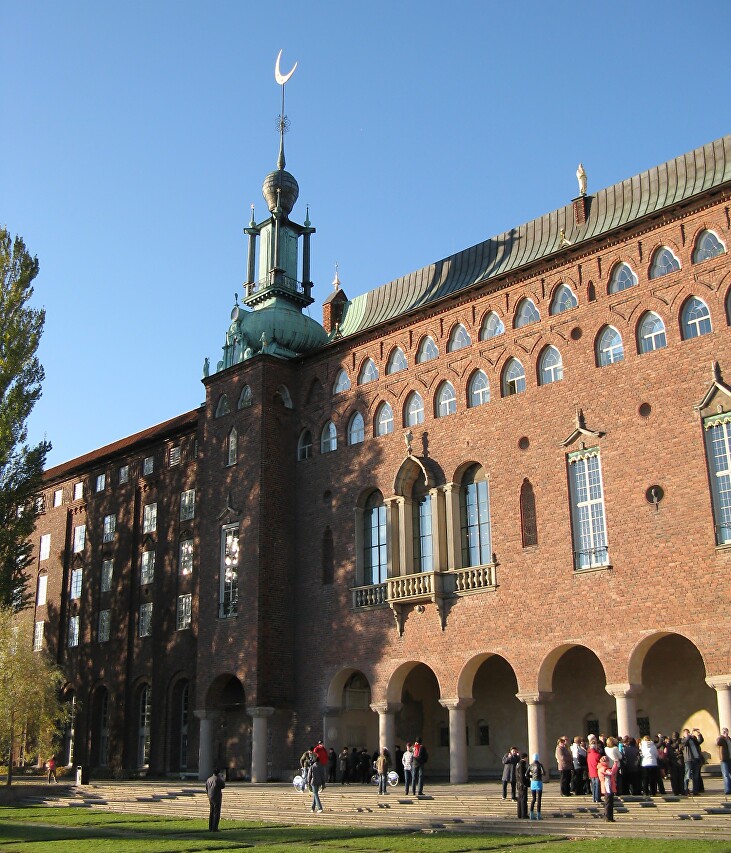 The main problem during construction was the structure of the ground, which consisted of 11 meters of clay on top of rocks, so the foundation turned out to be extremely complex. Its construction was entrusted to the construction company Kreuger & Toll, and the foundation project was carried out by Henrik Kreuger, Professor of Road and Water Management at the Royal Institute of Technology and a cousin of one of the company's owners. The foundation of the main building was completed in 1912, and about two thousand reinforced concrete piles were built for it. For the base of the tower, eight reinforced concrete pillars standing on the rock were poured, these works were completed in the summer of 1913. 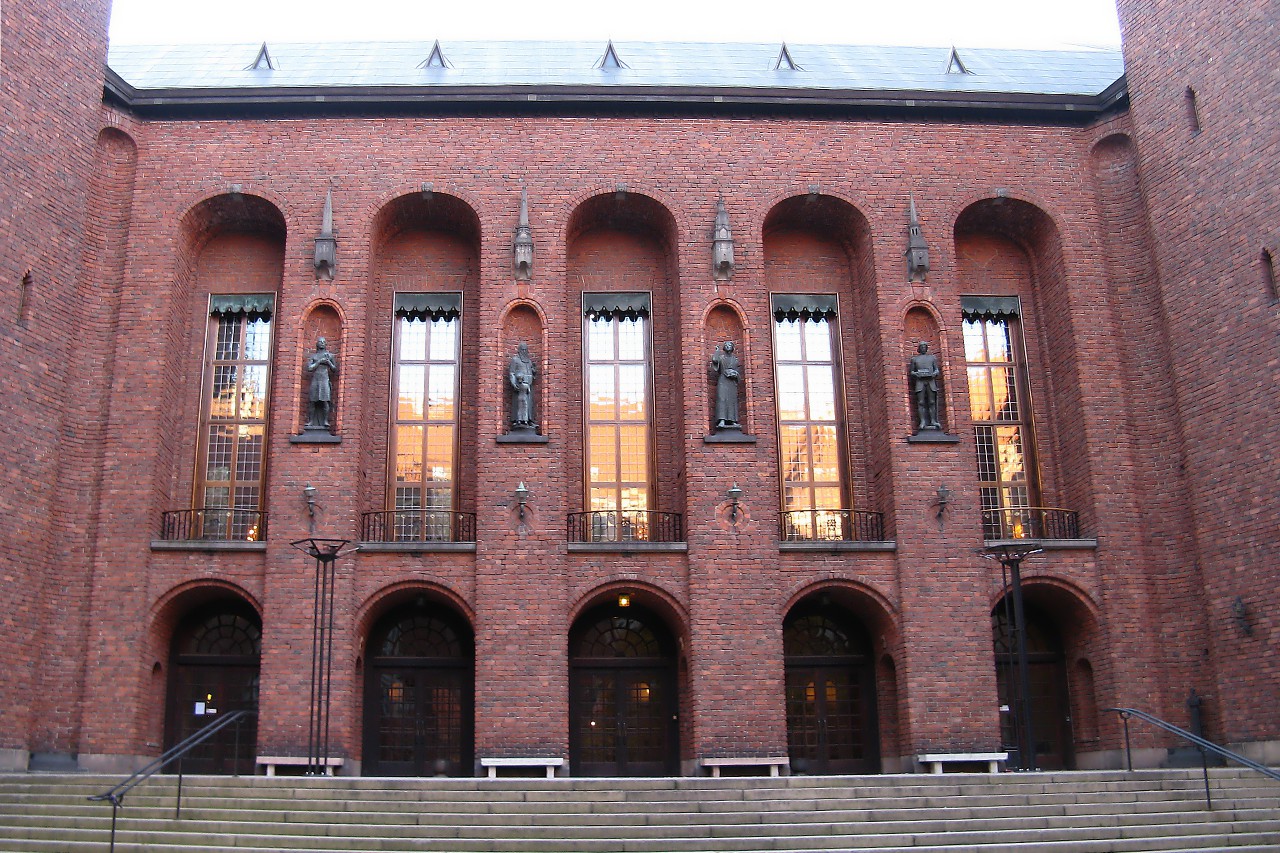 The Town Hall building is made of dark red brick, which has a slightly larger size than the standard one. According to Östberg, it is based on a brick that was found in 1909 during excavations near the Royal Palace. Since the brick is taller than usual, there are fewer horizontal seams, increasing the strength of the wall, while at the same time visually giving the building a greater monumentality. The mortar was also particularly strong, with some of the horizontal joints being further reinforced with reinforcing mesh. The Institute of Materials Testing of the Technical University regularly conducted pressure tests of bricks, mortar and masonry. Brick deliveries began in 1914 and were repeatedly interrupted due to material shortages and strikes. In total, more than 8 million bricks were made for the construction of the Town Hall. The grand opening of the Town Hall took place on June 23, 1923, 400 years after Gustav Vasa entered Stockholm. Construction costs between 1911 and 1923 totaled SEK 18,206,206, of which SEK 1,726,206 were donations. 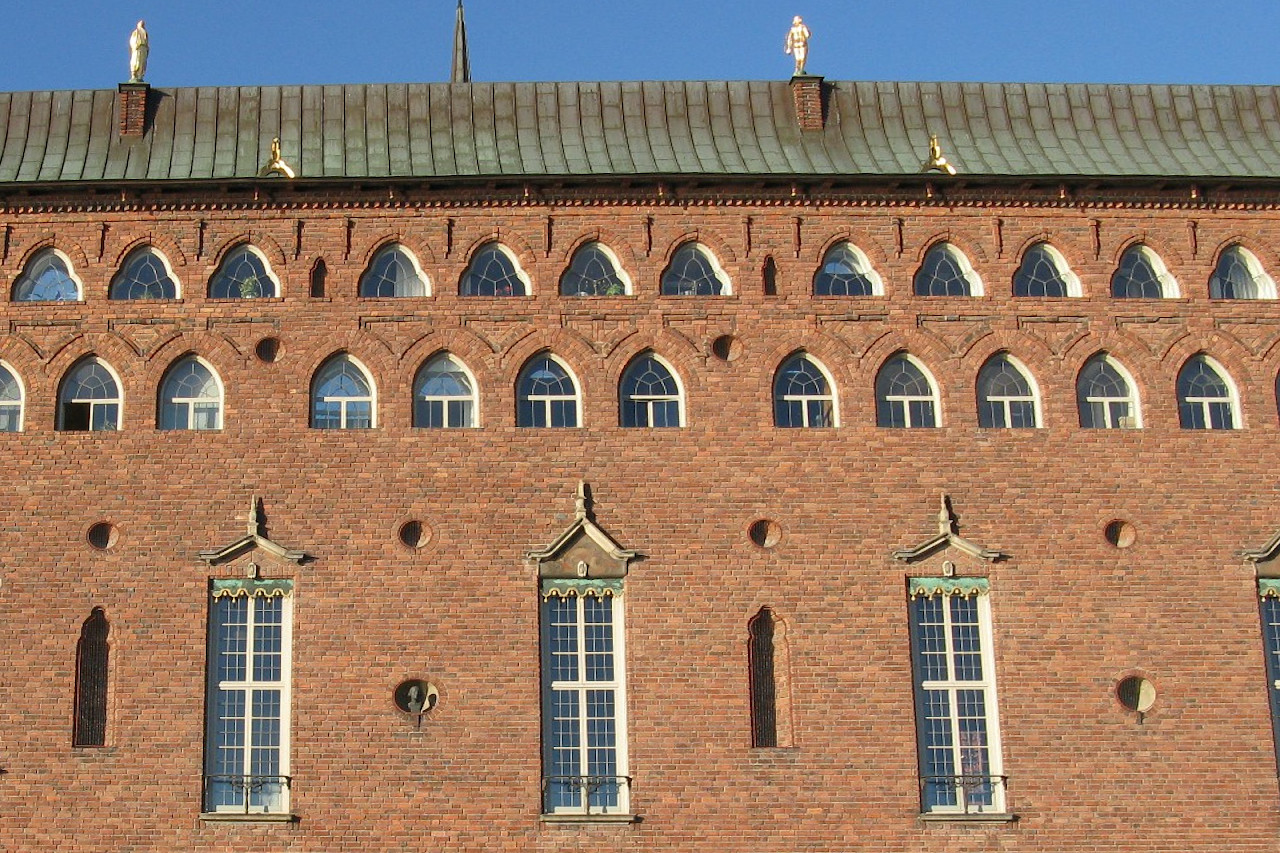 The Town Hall Tower has a height of 106 meters, in its upper part there is a belfry with a viewing platform, which can be reached by elevator, or by climbing 365 steps. 9 bells with a total weight of 8 tons are suspended here. You can hear them at noon and at 6 pm. In the tower there is a museum of the history of the construction of the Town Hall. 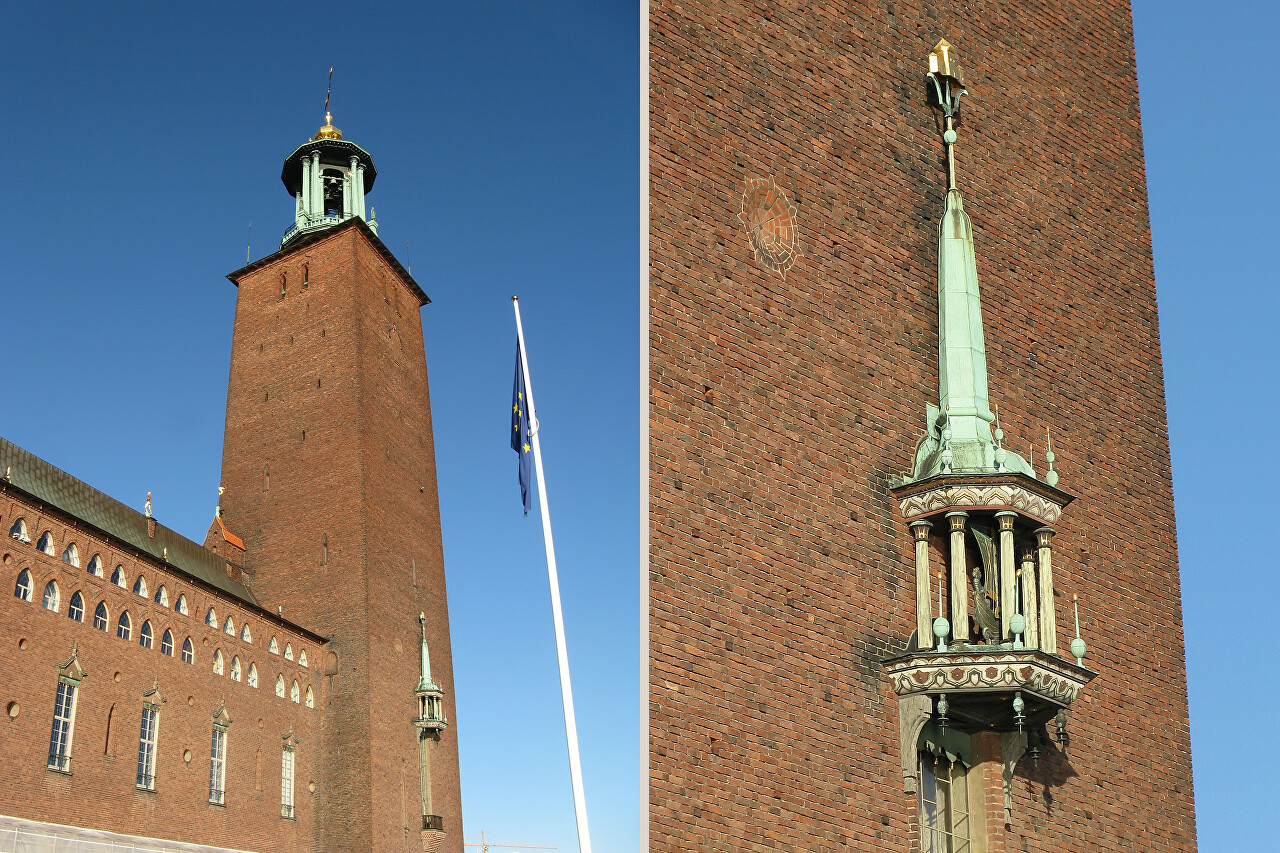 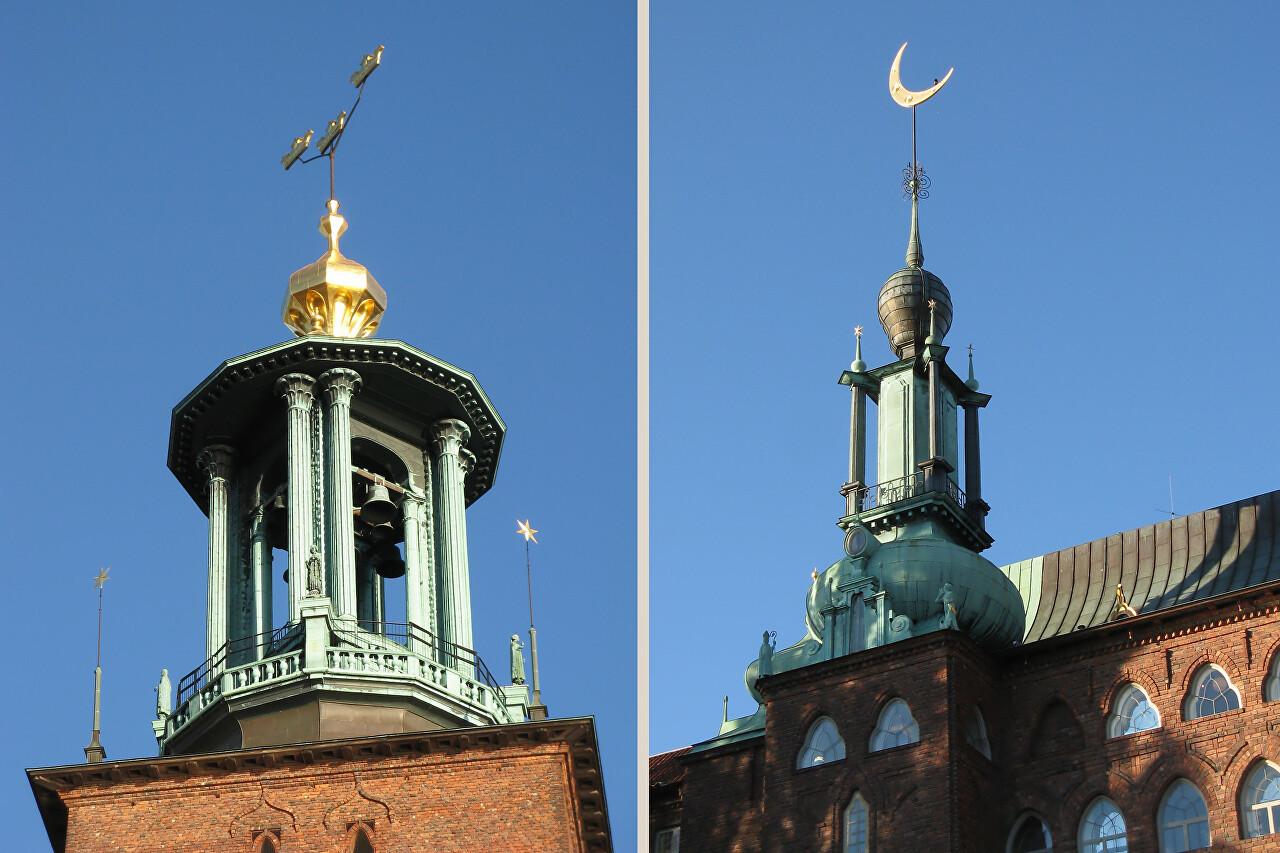 12 elevators were installed in the building, and more than three thousand electric bulbs were used for lighting. The original heating project was in the spirit of the times, using electric radiators, but for economic reasons they decided to use water heating with their own wood-fired boiler house. Today the building is connected to the city heating network. 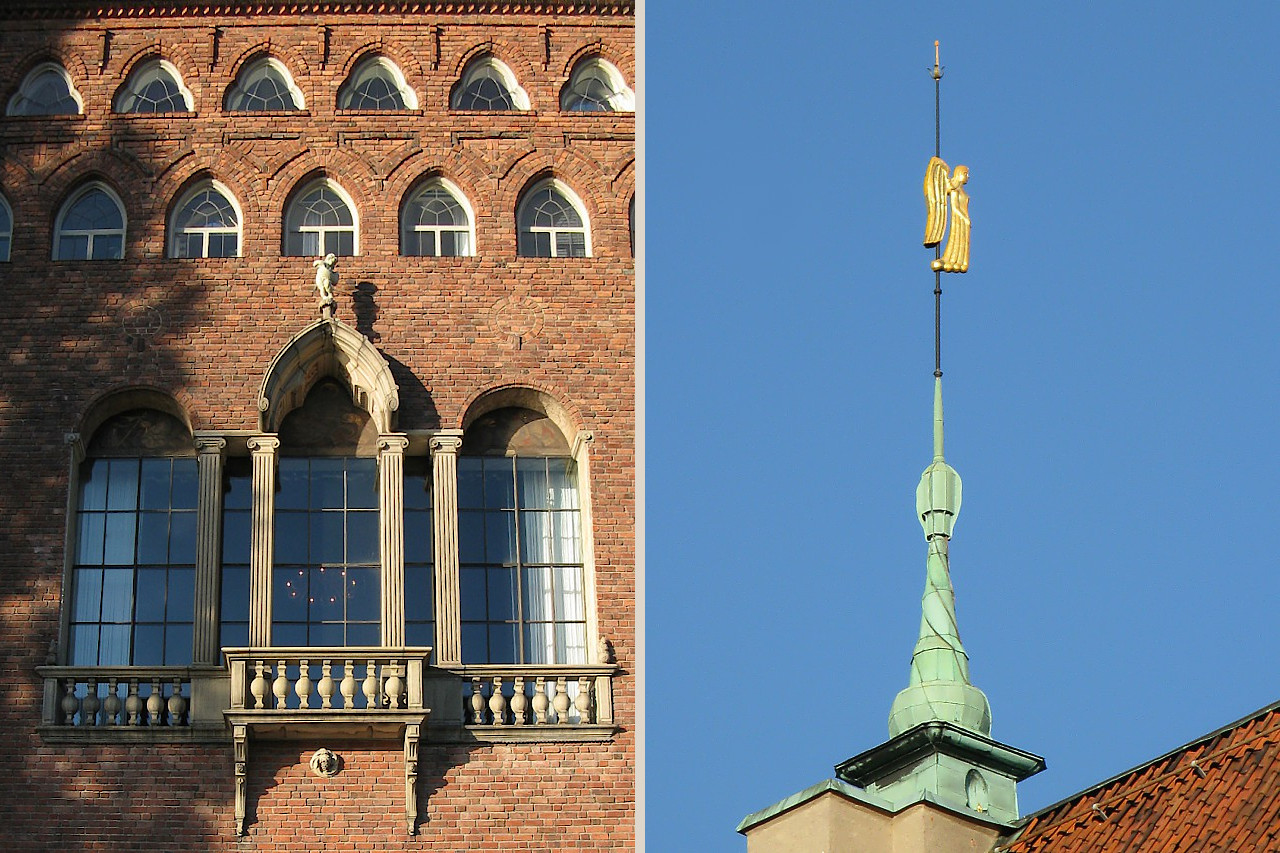 The interiors of the Town Hall include several luxurious halls decorated with sculptures and mosaics. You can get acquainted with them only as part of the daily guided tour. Individual visitors form groups that depart every half hour from 9: 30 to 16: 00 during the summer period, and every other hour from 10:00 to 15:00 during the rest of the year. Generally, this schedule is observed, but depending on the events held in the Town Hall, it is possible to close at an earlier time, and access to some halls may also be closed. There is no advance or online booking, and a ticket for the tour can only be purchased at the ticket office of the City Hall on a first-come, first-served basis on the day of the visit. The ticket office is open from 8: 30. Ticket price for adults 130 SK, for students and seniors 110 SK, students under 19 years old 50 SK, children under 6 years old free of charge. 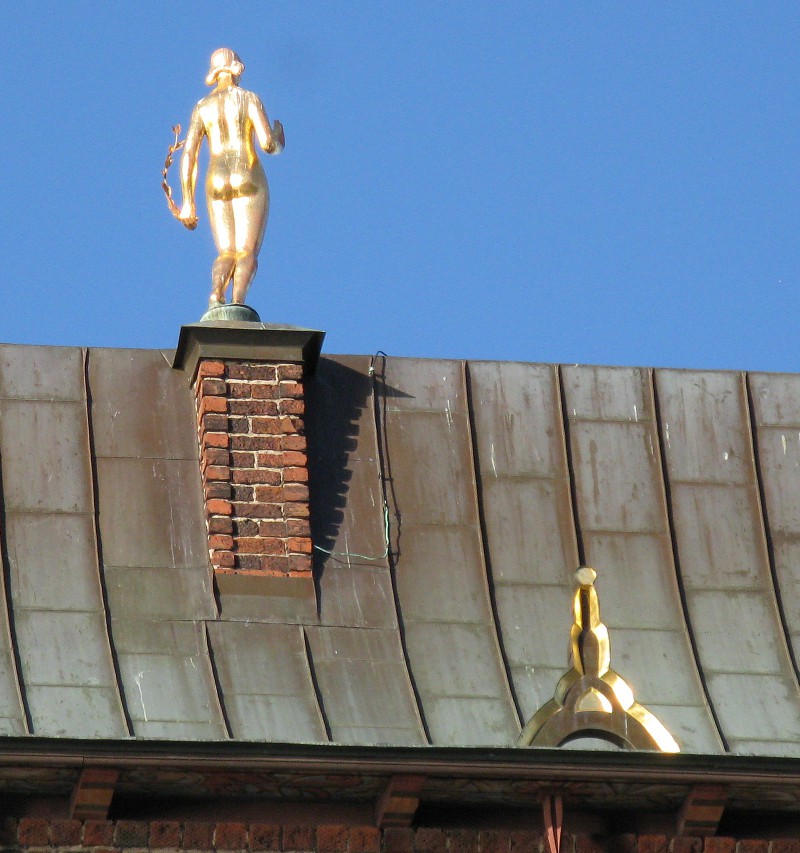 After exploring the Town Hall, be sure to take a walk through the park (Stadshusparken), which stretches in front of its southern facade on the bay. The park is open daily, from June to September from 8 to 20 hours, in other months from 8 to 18 hours. 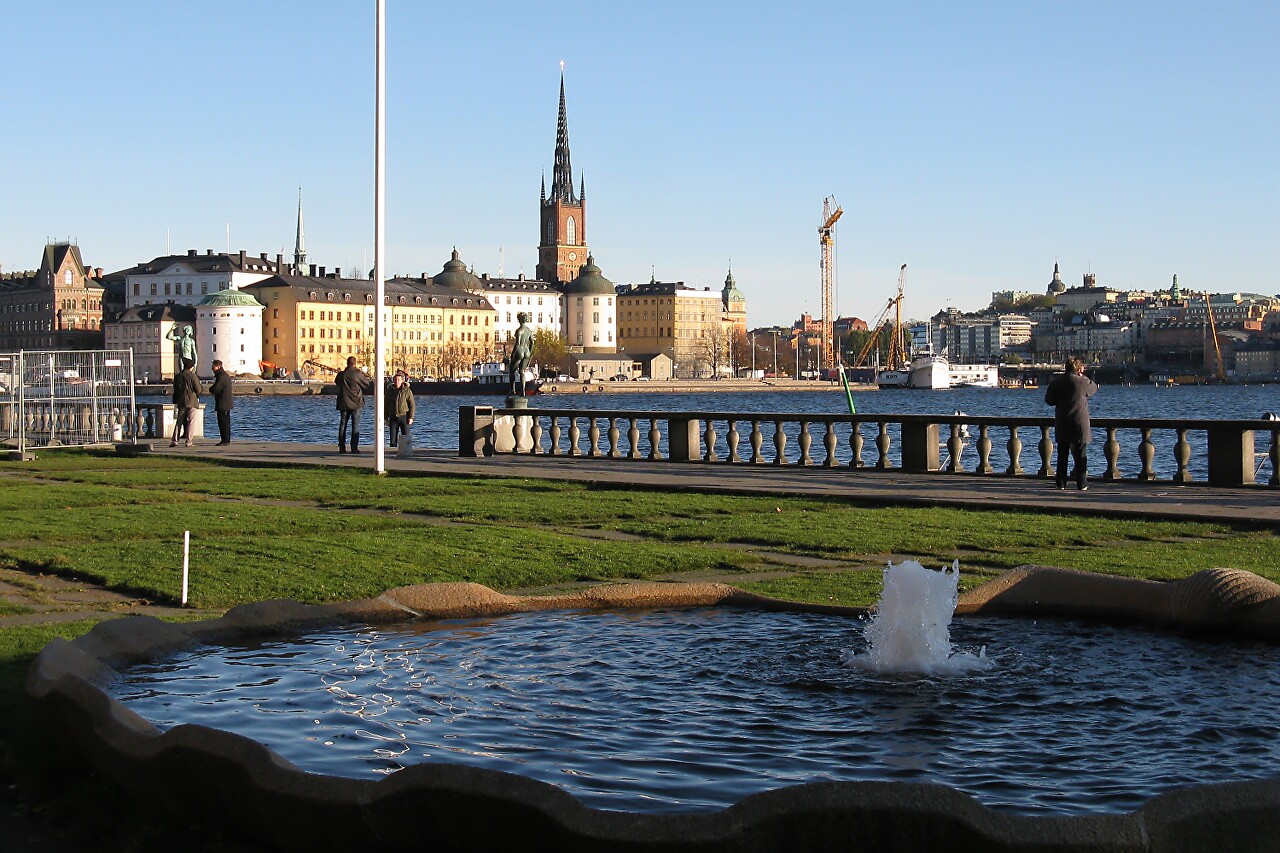 Here you will see several monuments, the most famous of which is a column with a statue at the top. There is a misconception that you can even hear from some guides that this monument is dedicated to Jarl Birger, the founder of Stockholm. However, in fact, the statue depicts the national hero of Sweden Engelbrekt Engelbrektsson, who led the uprising of 1434-36, which resulted in the country's independence from Denmark. Designed by Christian Eriksson, the monument was opened in 1932. 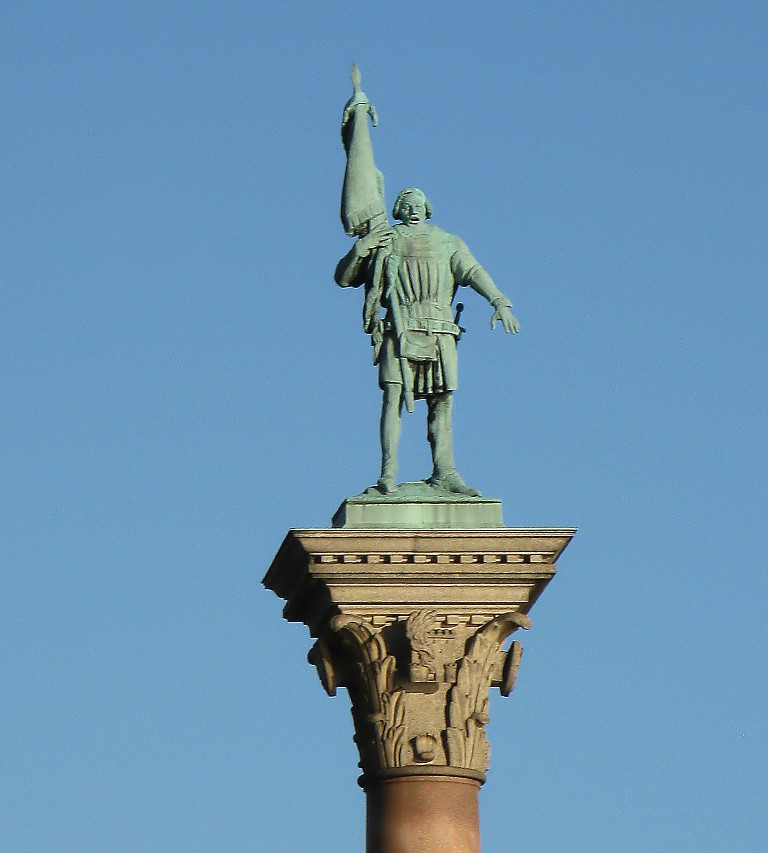 The embankment's balustrade is decorated with three bronze statues made by Carl Eldhs with the names Diktaren, Poeten and Molaren, installed in 1923. The naked statues initially caused a lot of protests among the city's public. 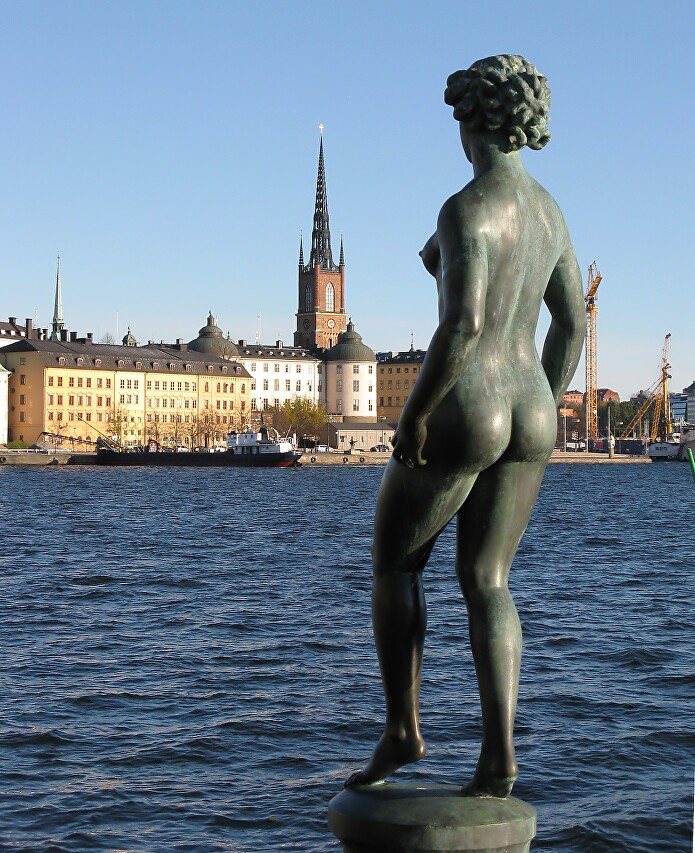 The park offers a wonderful view of the bay and the central part of the city - Knight's Island and Gamla Stan. 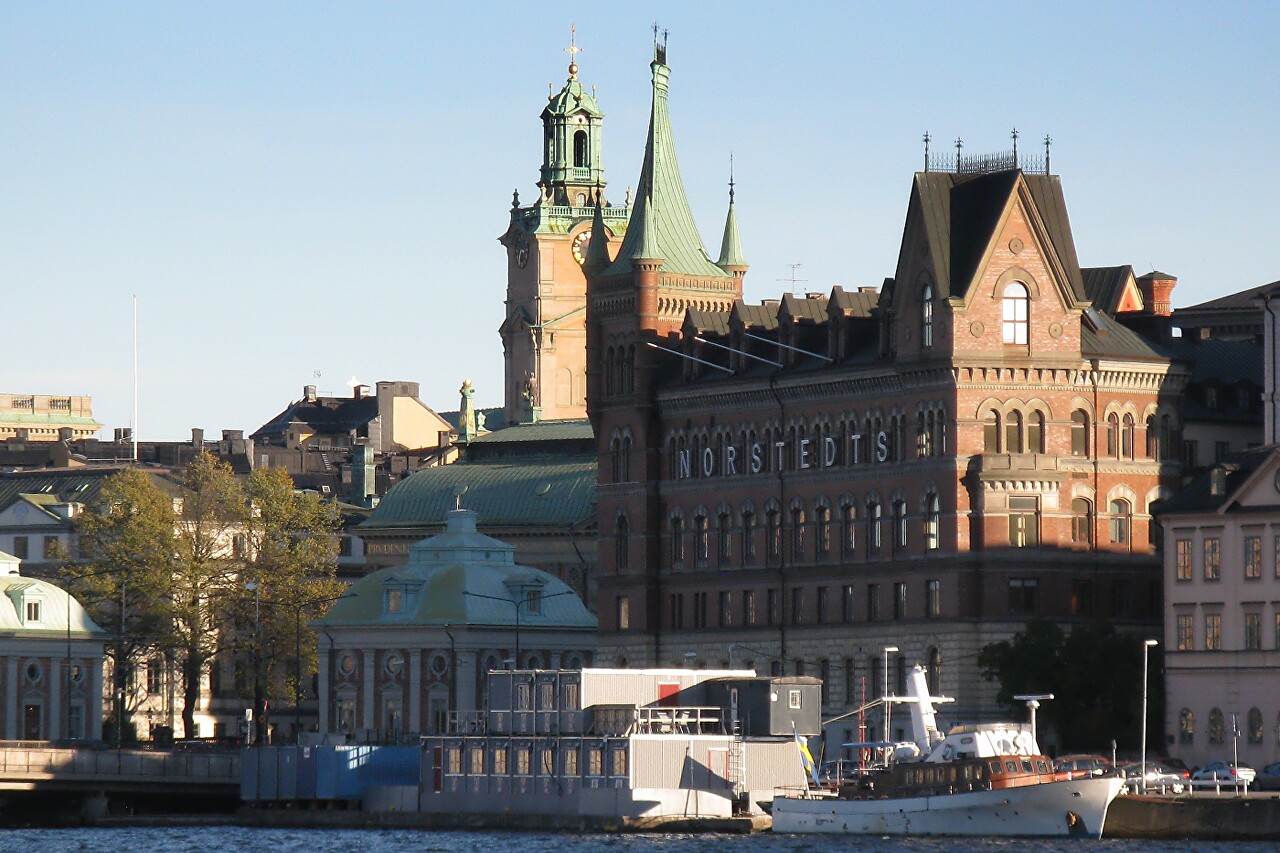