Barcelona in May, first walk, evening

The first day in Barcelona was very short. When I arrived from airport and had a hard time finding the house that was listed in the Booking reservation, I didn't there was no sign of a hotel there. Walking around the block again, and after checking the address at a nearby barbershop, I sat down on the porch steps and I tried to call the phone number listed in the reservation. But, as always it happens in such cases, the phone was disconnected as soon as the call went out - the battery died while searching for the hotel using GPS Navigator. I I was just about to go find a coffee shop where I could charge my phone, but I don't need to help came to the Barber, who was bored waiting for customers on the next on the porch. Finding out why I have this look, he is without any talking pulled out his phone, dialed the desired number, and said subscriber, he's looking forward to it. Hearing that the owner of the flophouse promised come up in 10 minutes, I sat down on the steps next to the Barber and we had a casual conversation in a mixture of Spanish, English and German words. It quickly became clear that my interlocutor has some idea of the Russian language, since a year ago it was conferences of barbers in Russia. I've been to and from St. Petersburg and Samara the trip brought a lot of impressions, the main of which were amazing according to the beauty of Russian girls who drink vodka in huge quantities without visible consequences. Then he asked me what my plans were, and I told him, that I was going to Aragon. When I mentioned the Haka and the Canfranc, he shivered and said he said that Tom was cold even in summer, which I actually experienced a week from now. Finally, my host came up and apologized for not being on the phone. at the appointed time (I gave the time of arrival), and we went up to the second floor of the entrance of an ordinary residential building. The boarding house turned out to be a converted apartment, and there were no signs of what was going on here the guest house is located. Apparently, the host optimizes this way taxation. My room turned out to be a cubbyhole with a bunk bed and there was a small window looking out into the courtyard-a well, but that was all I expected. In the establishment had 5-6 rooms, shared toilet and shower, there was a kitchen with co with all the necessary equipment, there was also WiFi Internet access-in there was no signal in my room. In General, it was possible to live, especially for a long time. such money (22 euros per day) is cheaper in relatively expensive Barcelona there were only beds in the hostels ' dormitories. When I was settled, I went in search of food, and finding Chinese food in the vicinity minimarket-Alimentacion, bought food for all two days of your stay in the city Barcelona. Having finished my meal, I went for my first walk around the capital Catalonia, when the sun was already sinking to the horizon. 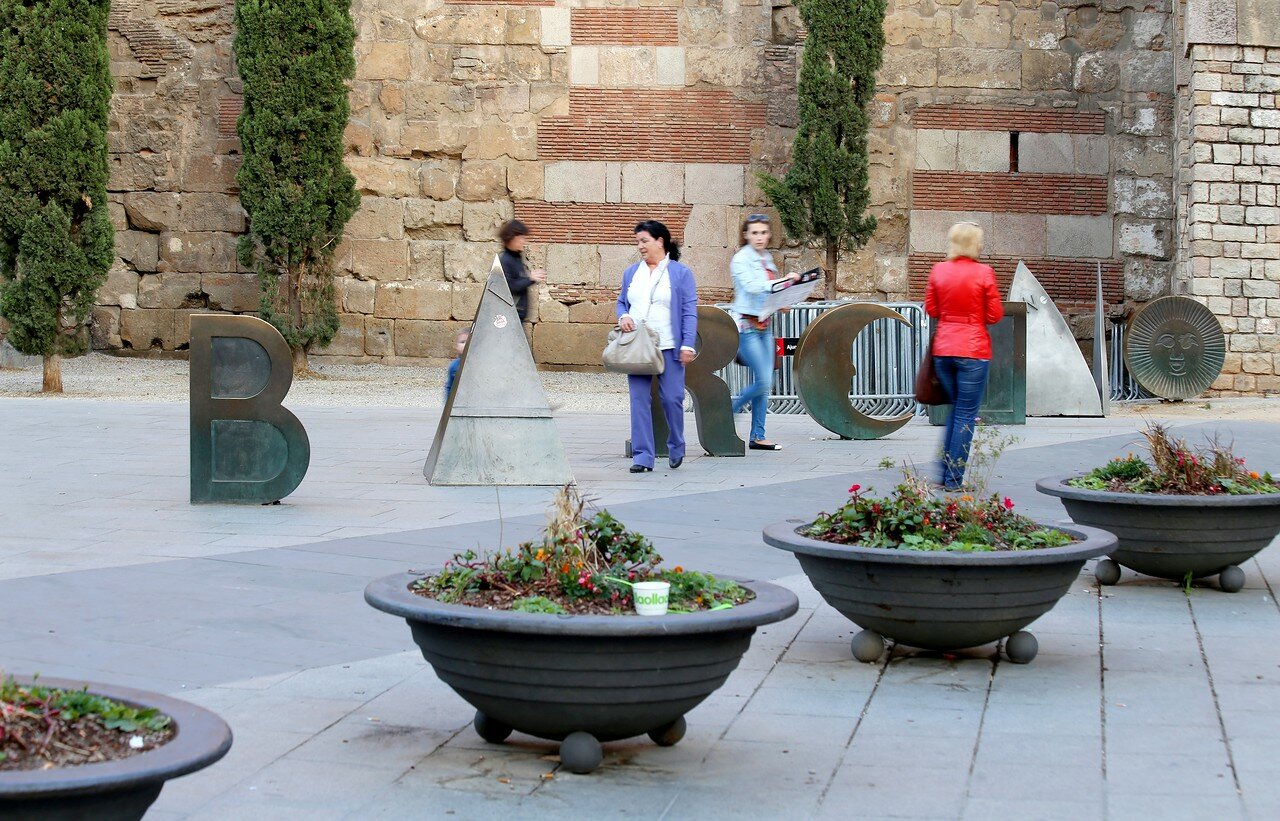 Since my residence was in the Gothic quarter, I started my walk from the Plaza de seu, where the Archdeacon's house is located, built on Roman foundations. 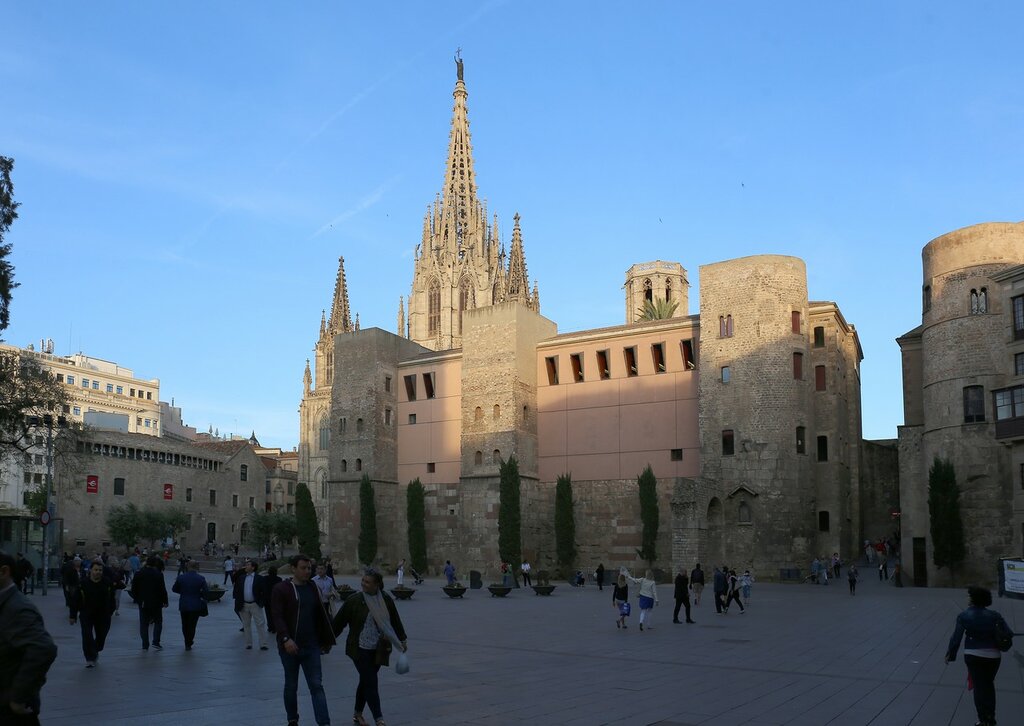 And the Cathedral of Barcelona. 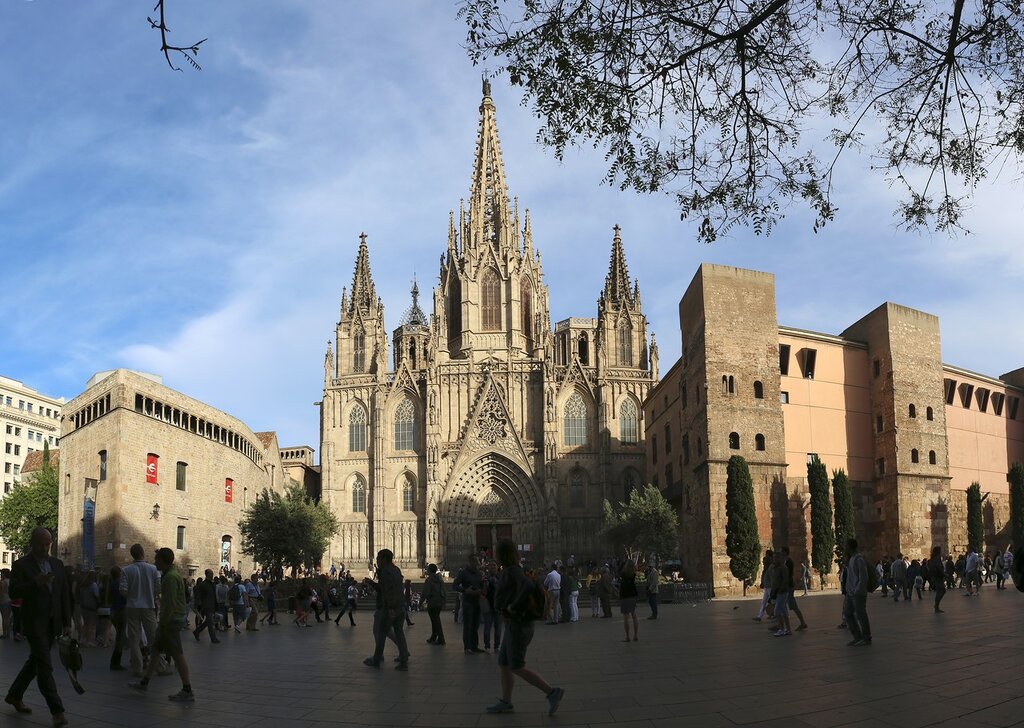 Then I crossed the Anton Maura square, where the night lights were already turned on on the Bank of Catalonia building. 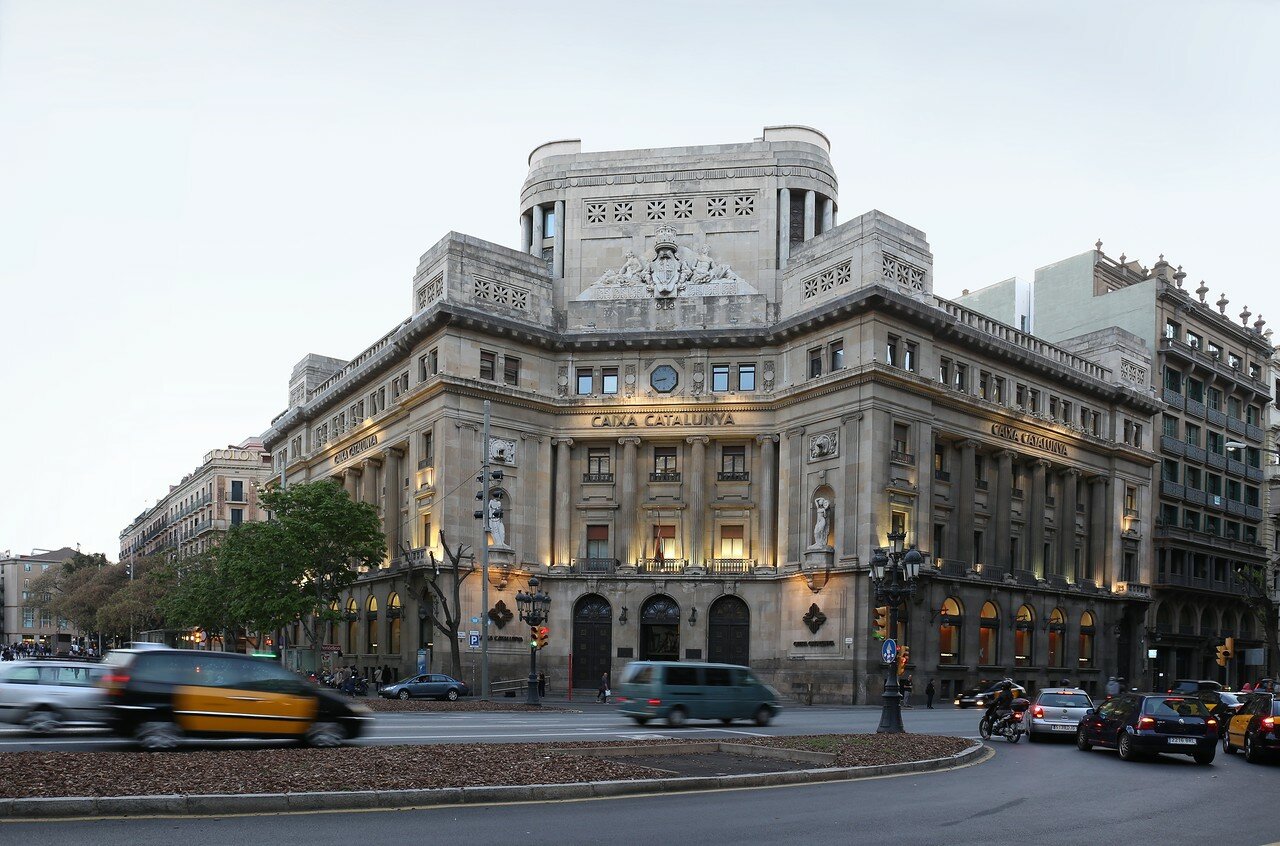 Then I went to the quarter of SNT-Per to the Palace of Catalan music. 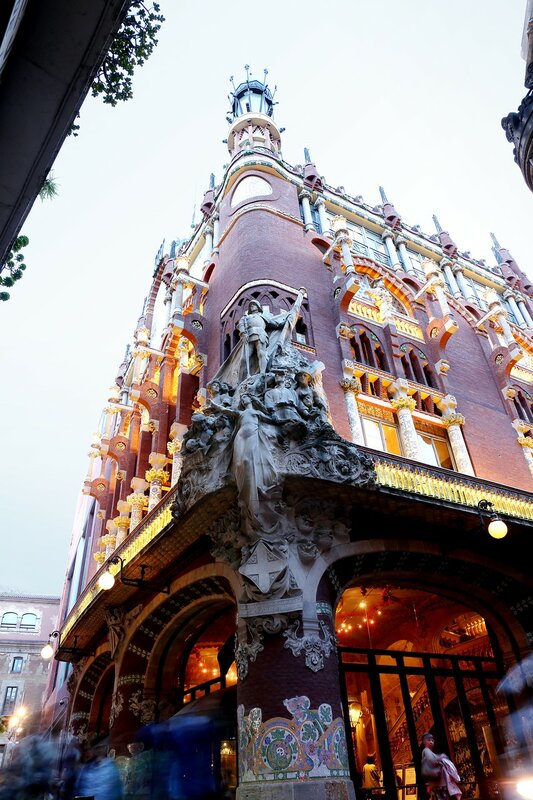 Knowing that darkness would come very quickly, I brought a tripod with me, but it was impossible to use it on a narrow street in a crowd of people. 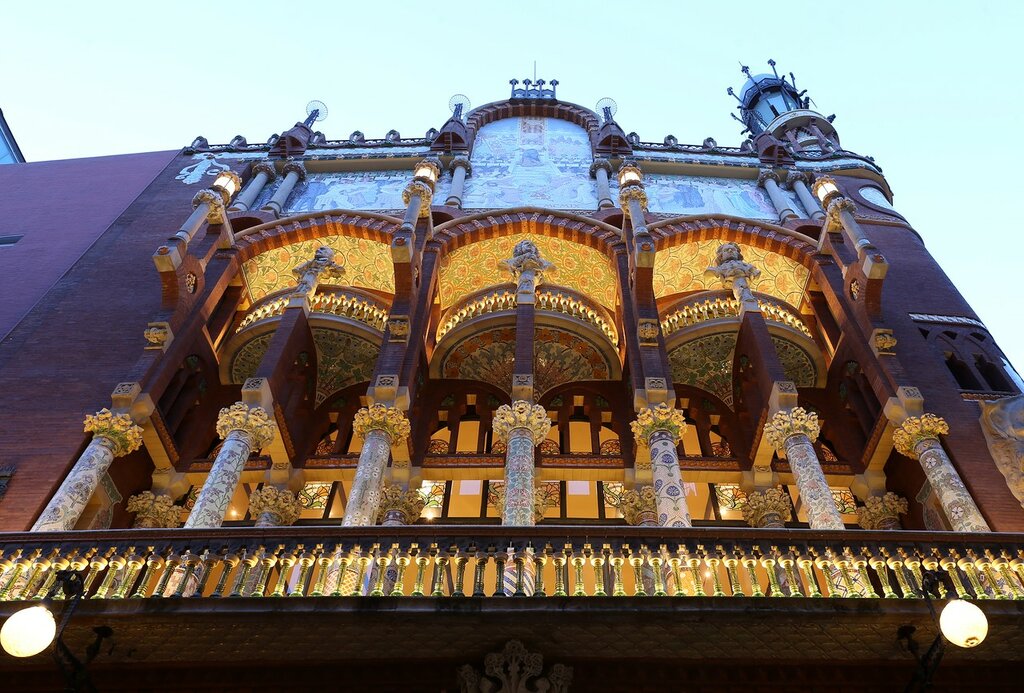 After taking three frames, I left the case, deciding that it would be better to come here in the afternoon and headed in the direction of Louis Companys Boulevard. 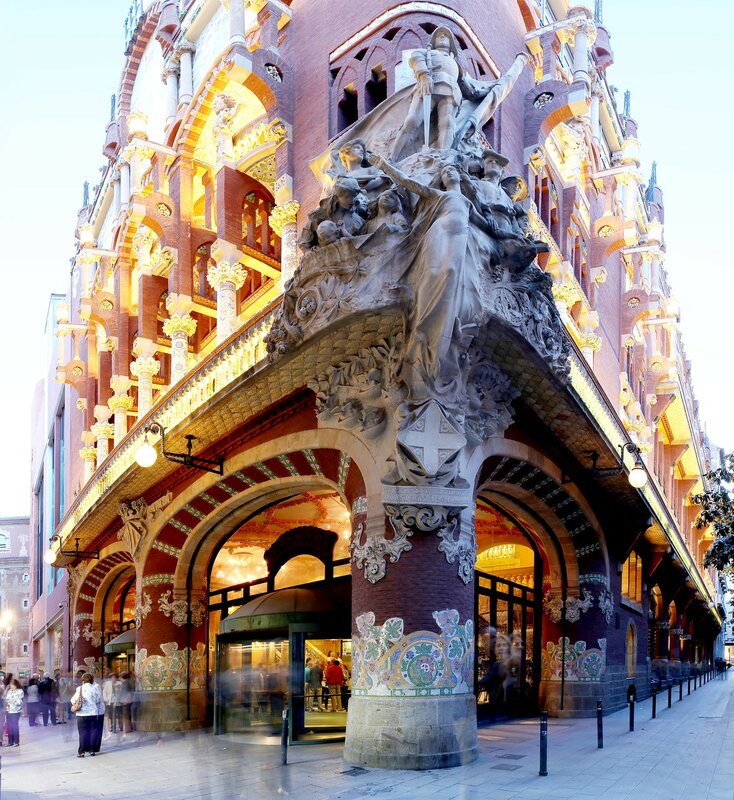 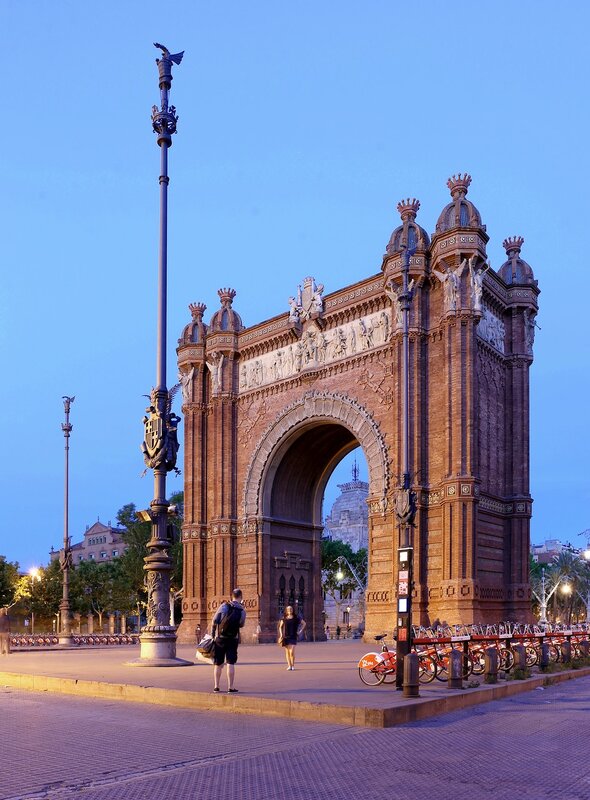