In June 2009, a major construction project was launched near the Plaza de Glories, which was given the working title Barcelona DHUB (Design Hub Barcelona on the map). The new center of the Barcelona Institute of Culture will house several museums under its roof: Decorative arts (Museu de les Arts Decoratives), Textiles and sewing (Museu Tèxtil i d'indumentària) and Graphic arts (Gabinet de les Arts Gràfiques). A design lab and thematic library will also be opened here, and the building will become a place for designers, architects and fashion designers to communicate and exchange experience. The idea to combine the museums into a single complex was put forward by Oriol Bohigas, Director of architectural planning in Barcelona. Since 2013, the project has been officially named the "Barcelona design Museum" (Museu del Disseny de Barcelona). The construction is carried out by MBM company under the project of architects Oriol Martorell, Oriol Boigas and David Musk (Oriol Martorell, Oriol Bohigas, David Mackay). The center is scheduled to open on December 14, 2014. 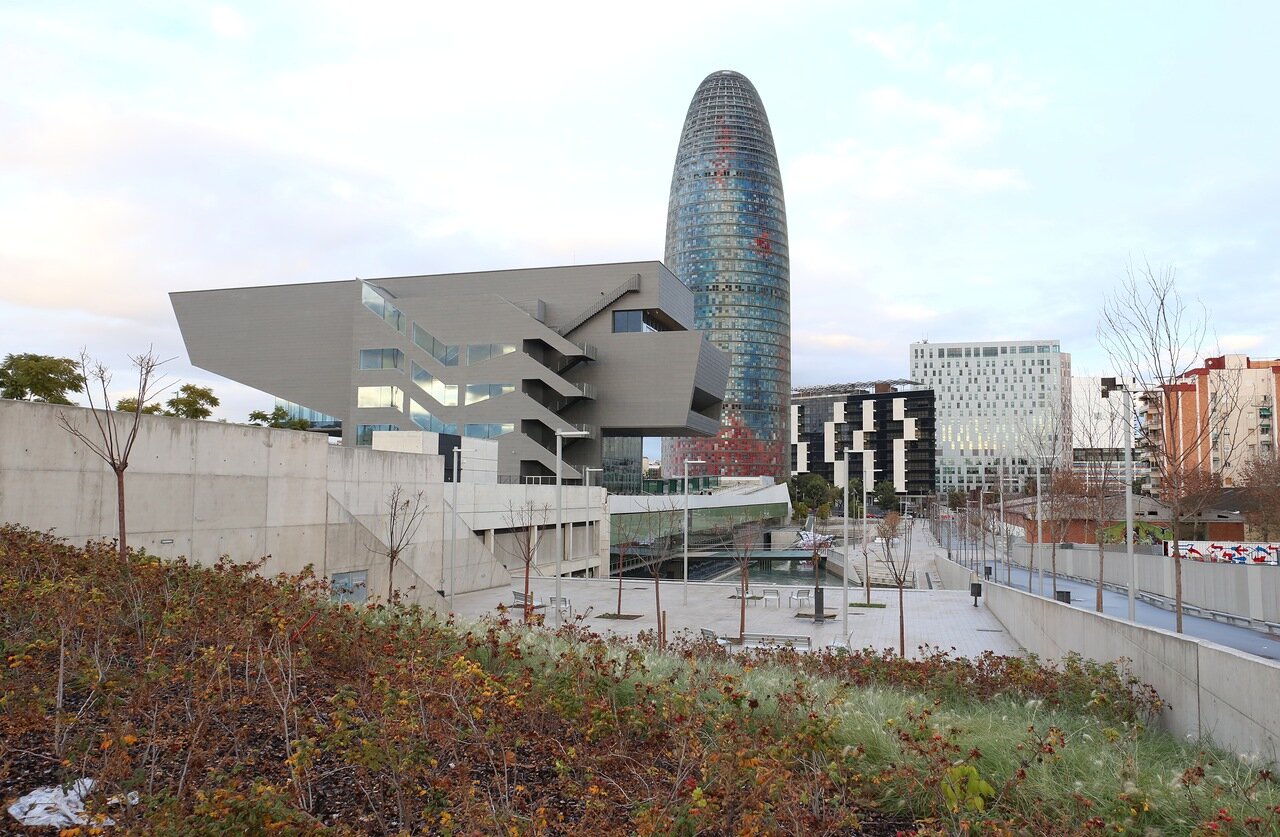 Most of the building is buried underground, and its roof is an artificial lawn. The underground part has three floors, where the main exhibition hall, conference rooms, laboratories and classrooms are located. The lower level opens into the public space of the square of glory, which after reconstruction also went underground.. The aboveground building has a height of 14.5 meters, there are a library, a bar and restaurant and spacious halls. The project provides for the use of energy-efficient technologies: solar collectors that provide 70% of the energy for hot water, a rainwater collection and treatment system, "smart" plumbing that eliminates excessive water consumption, air conditioning with heat recuperators, solar panels for generating electricity, led lighting with presence sensors. All technical facilities of the building are managed by a single computer center.

Natural lighting of the underground floors of the part is carried out through a recess, at the bottom of which a pool with fountains is arranged. 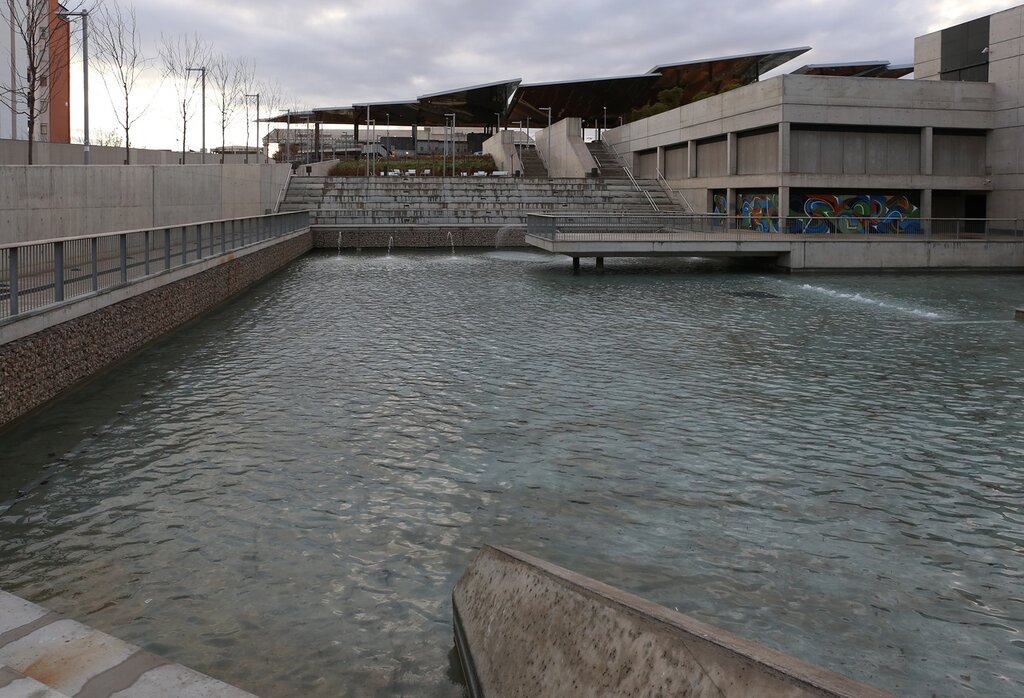 The intensity of the light stream is enhanced by reflection from the water surface of the pool with fountains. 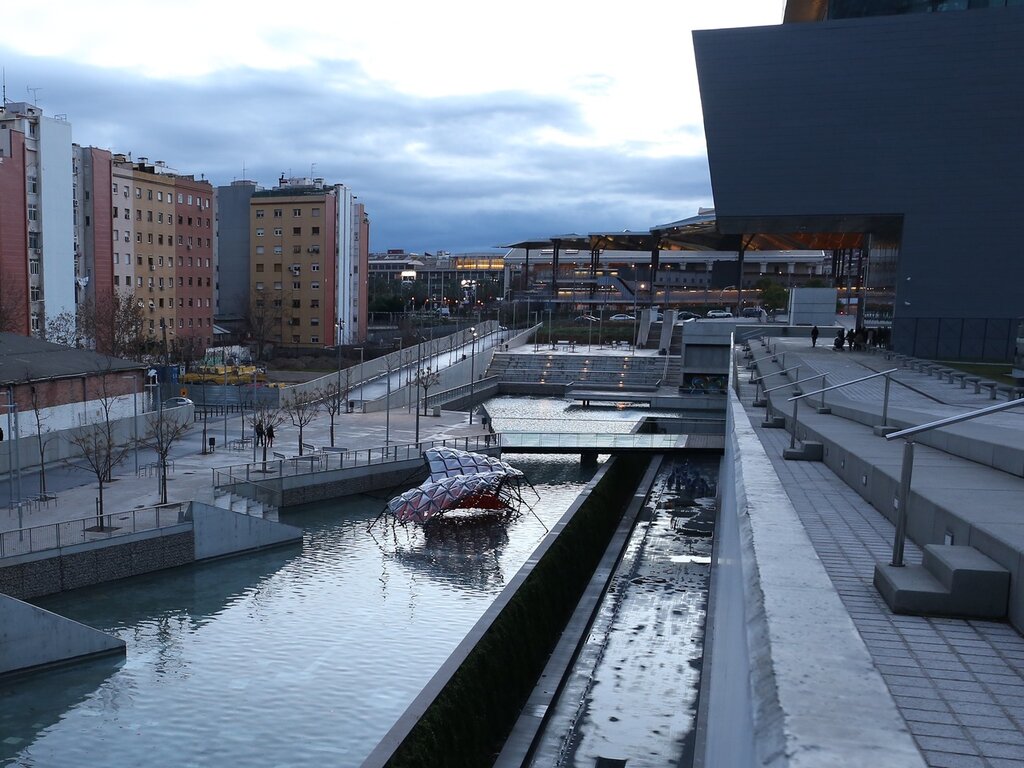 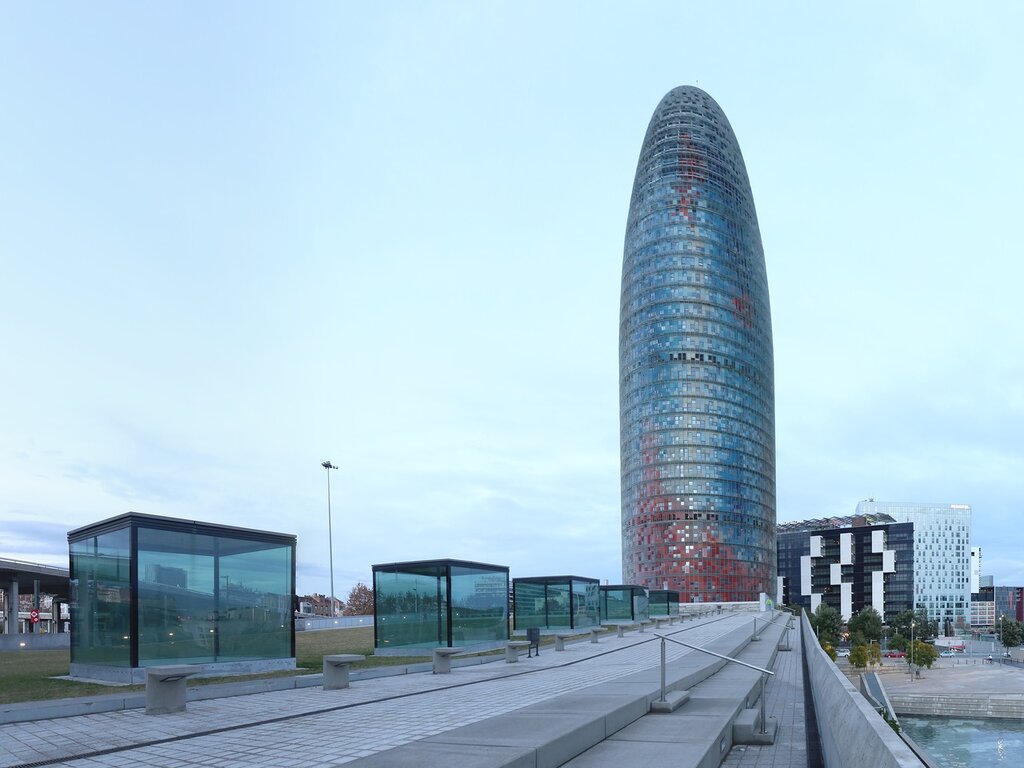 The DHUB complex will be the logical conclusion of the architectural ensemble of the square of Glories, including the AgbarBanshee , the Glories shopping center and the Barcelona Media Technopark. 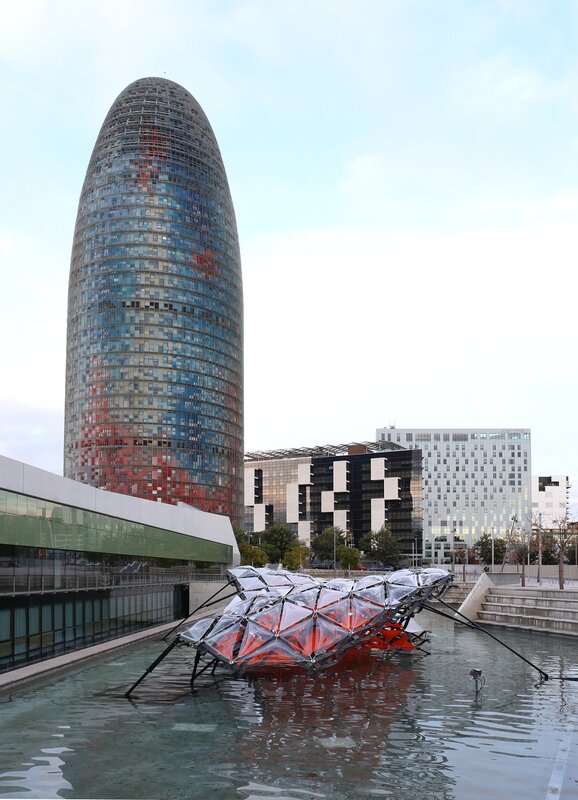 And the new building of the Fira de Belcaire market. 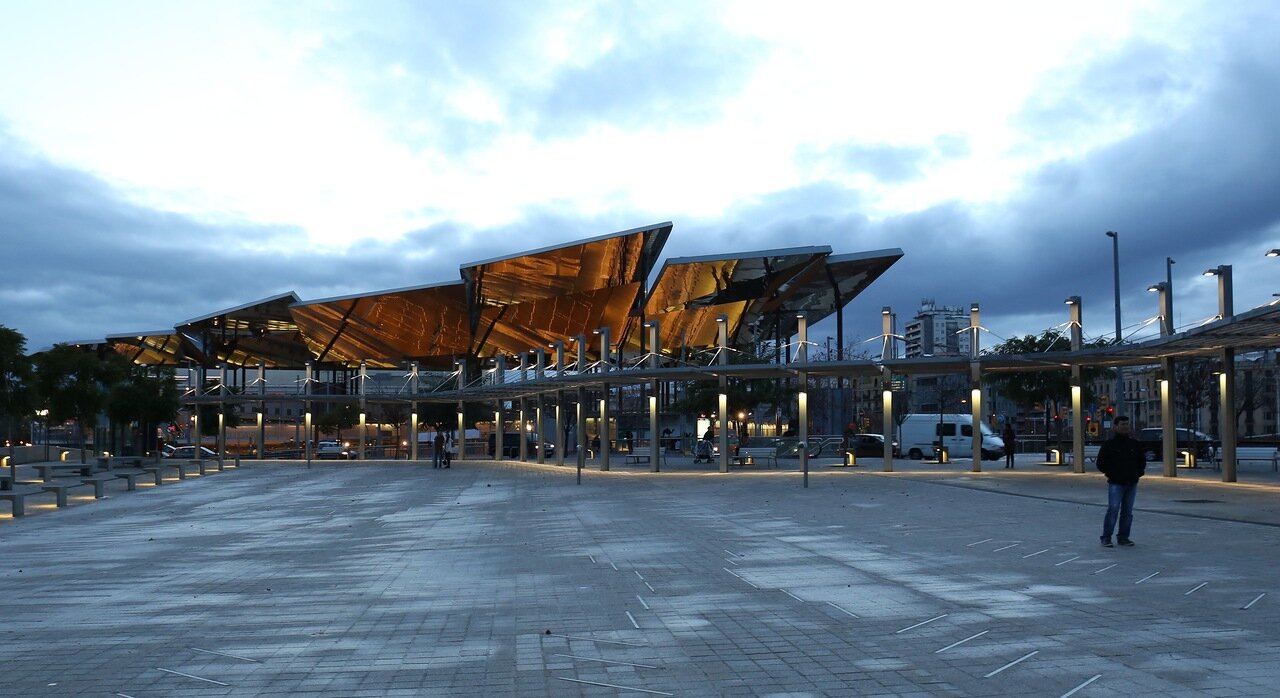 Just northeast of DHUB, the Silken Diagonal Barcelona hotel (left) and the new University buildings have recently been added. 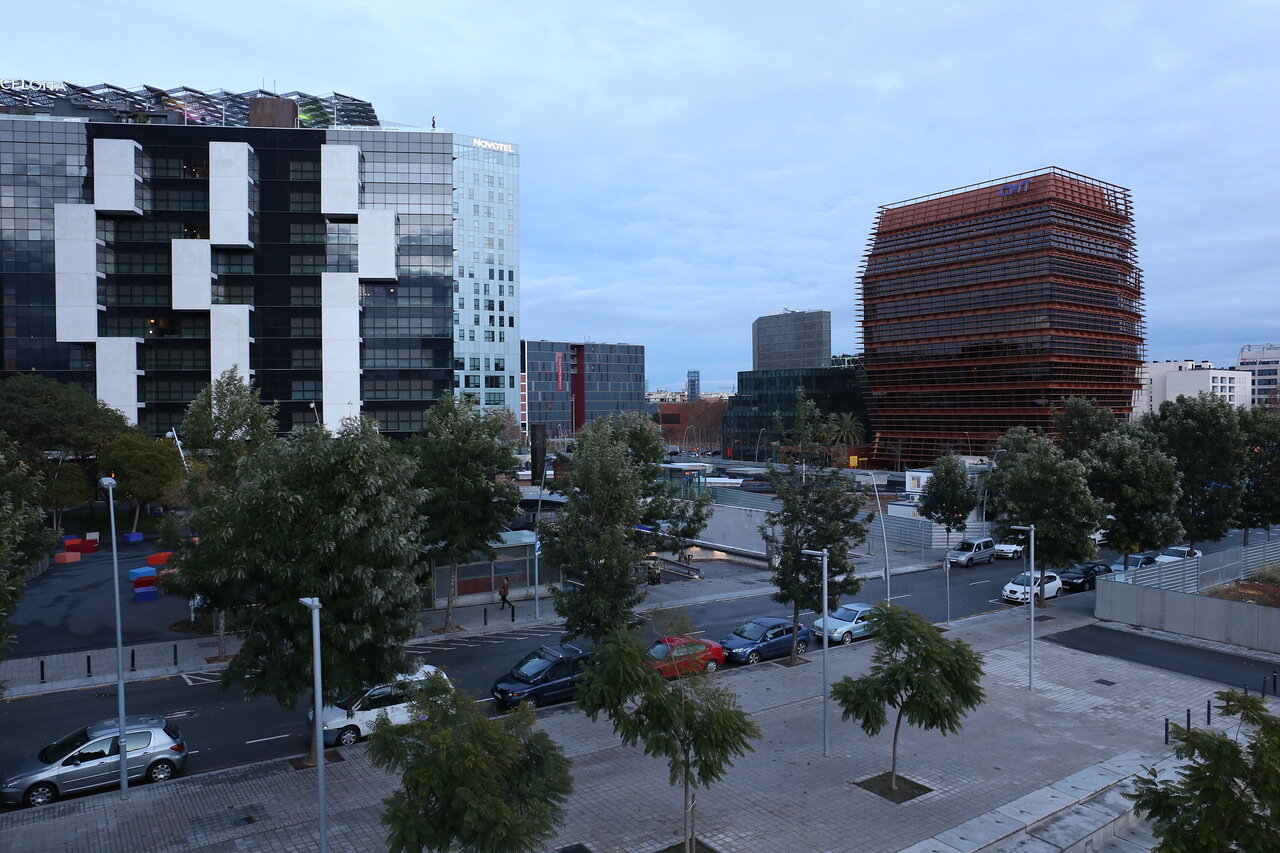